The U.S. yields are too low in relation to the level of the measured inflation in the country. This has been true since the controlling of the yields by the Fed began, but the phenomenon has accelerated further in recent months: the chart that measures the variation between the rate of inflation and the 10-year yields is entirely linear, but for a handful of exceptions. The gap observed today is definitely historic: 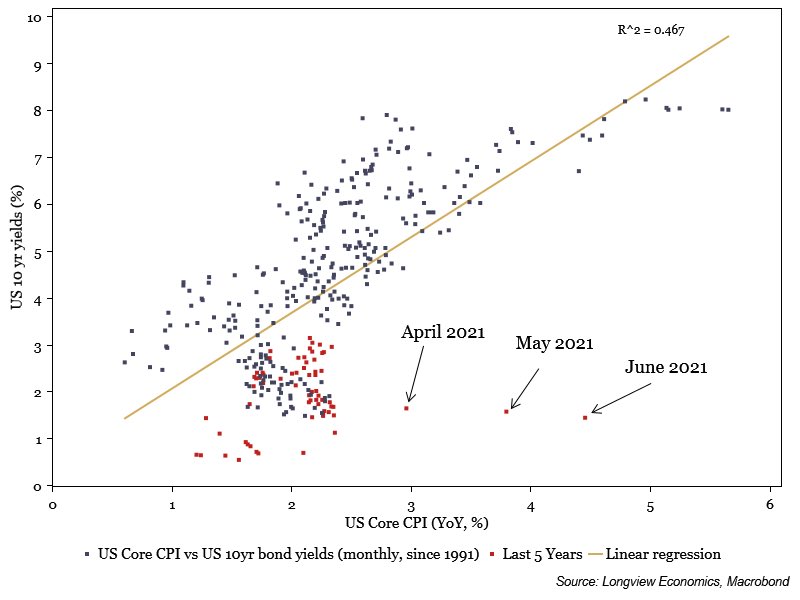 The yields are collapsing... 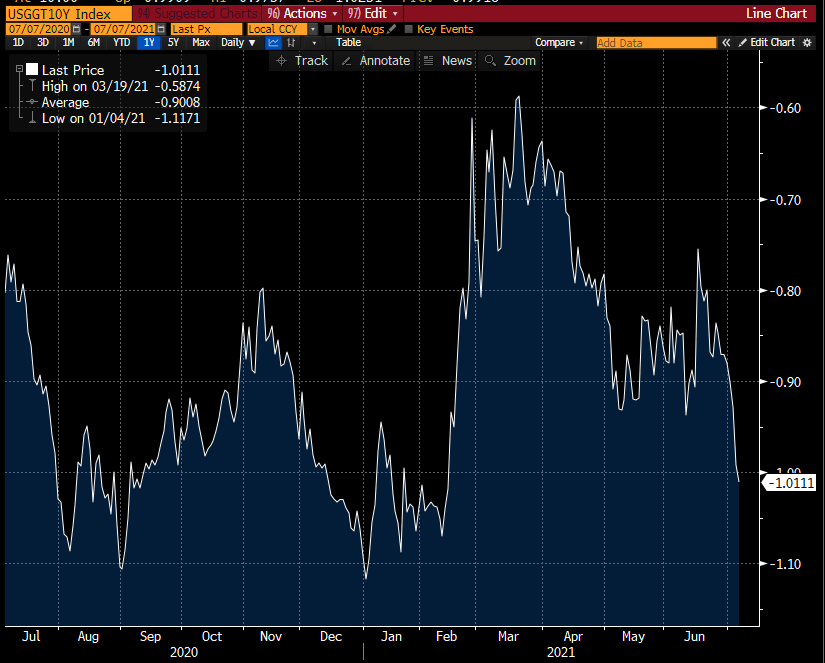 ...at a time when the price index is exploding upwards: 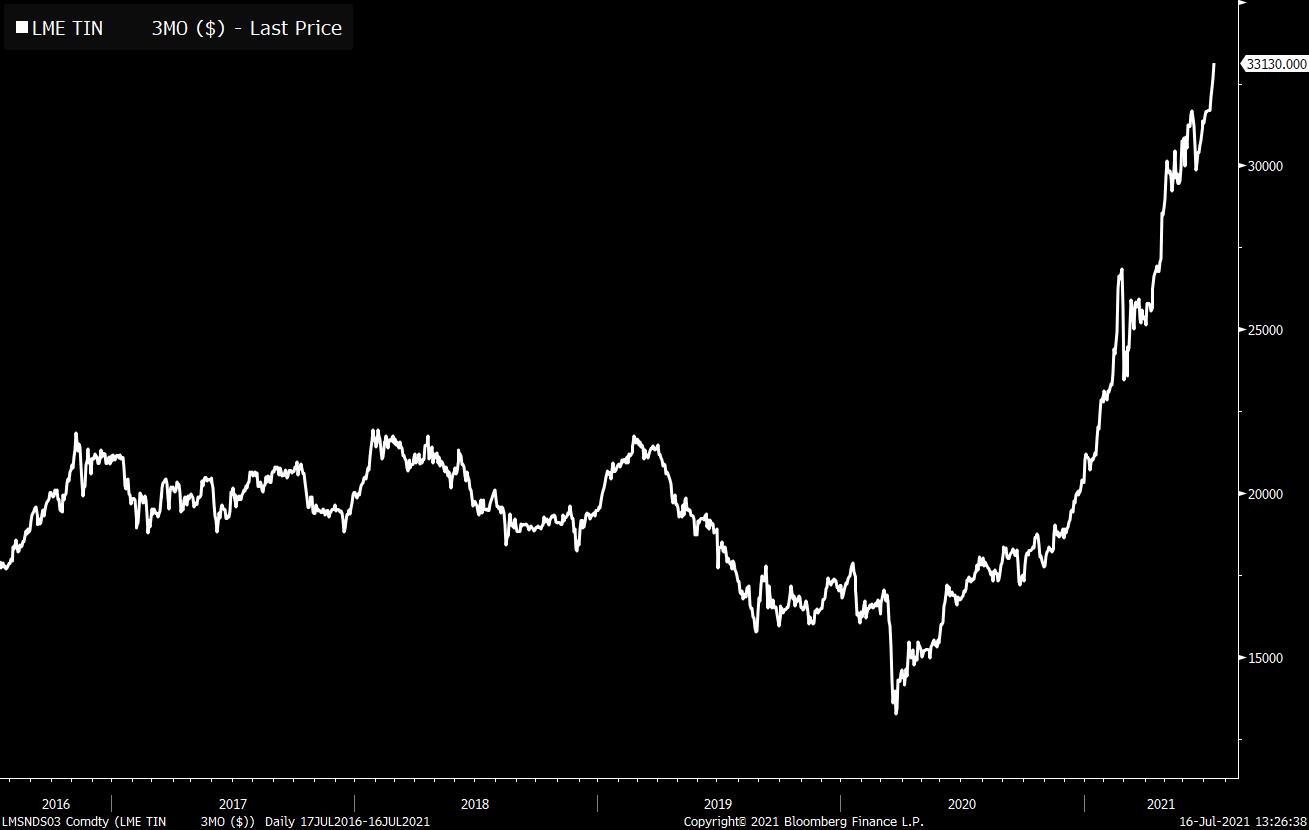 The real yields are plunging back down again this week, to a level not seen since the 1970s: 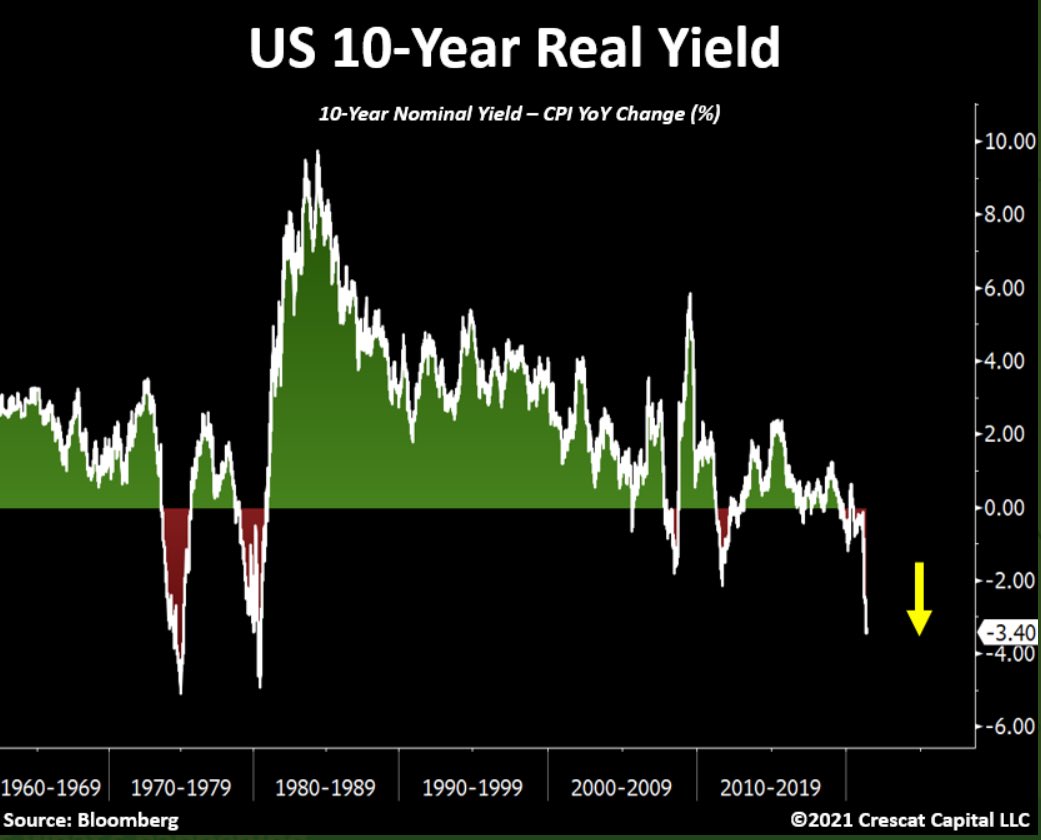 After the rise in the CPI, it is now the rise in the PPI that is causing concern to economic observers. If the prices paid by the producers start to increase, everything we have been hearing about the transitory effect of inflation will be thrown into question. The ascension of the PPI suggests, on the contrary, that a long rise in prices is on the cards for the consumer. This trend thus goes against what the Fed has been trying to hammer home on an almost daily basis for 3 months now...

The change of perception regarding the lasting nature of the inflation is gradually imprinting itself on the minds of U.S. consumers.

This is particularly noticeable when it comes to people’s intentions to buy a house. The latest figure from the University of Michigan’s Survey reveals a radical change on the part of the consumer. Real estate has become too expensive and the urgent message for buyers is that they should wait. 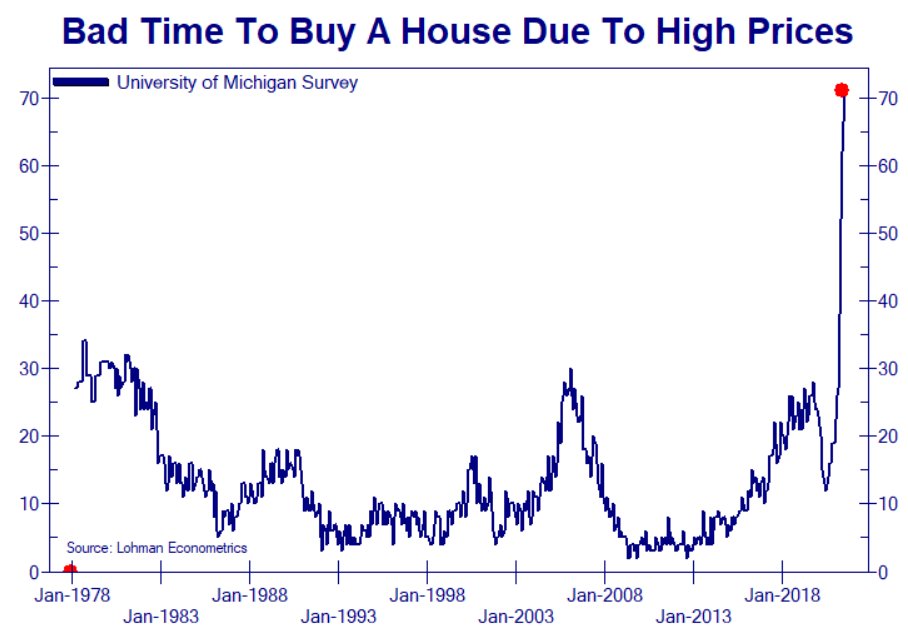 House prices are too high for the first-time buyers category, who are entering the market with far more debt and far less wealth than the ‘Boomer’ generation had at the same age: 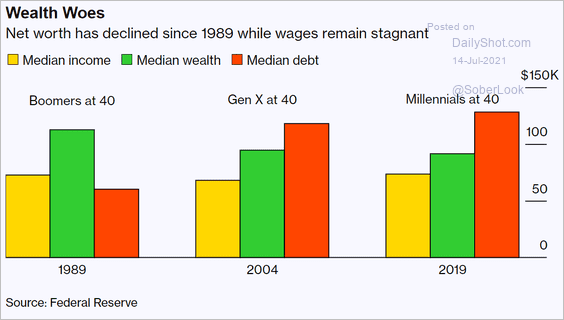 The mortgage rates have never been so low, meaning that there is no longer any room for maneuver when it comes to buying assets that have become too expensive.

This discouragement on the part of the consumer, faced with the rise in prices, can be measured on sales of automobiles. The dealerships are starting to become deserted, too. 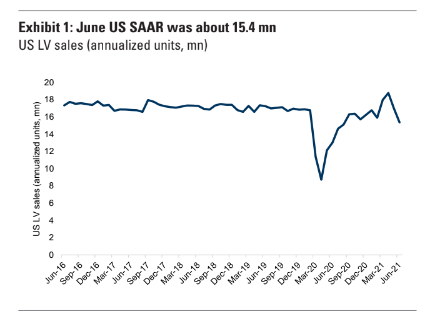 Generally speaking, the current rise in prices is no longer allowing companies to release enough of a margin; if they pass on the rise in prices to the consumer too brutally, demand will collapse. If they absorb the rise in production prices, their margins will collapse. This trend can be measured in particular by businesses’ real earnings yields, which are down to their lowest level in fifty years... 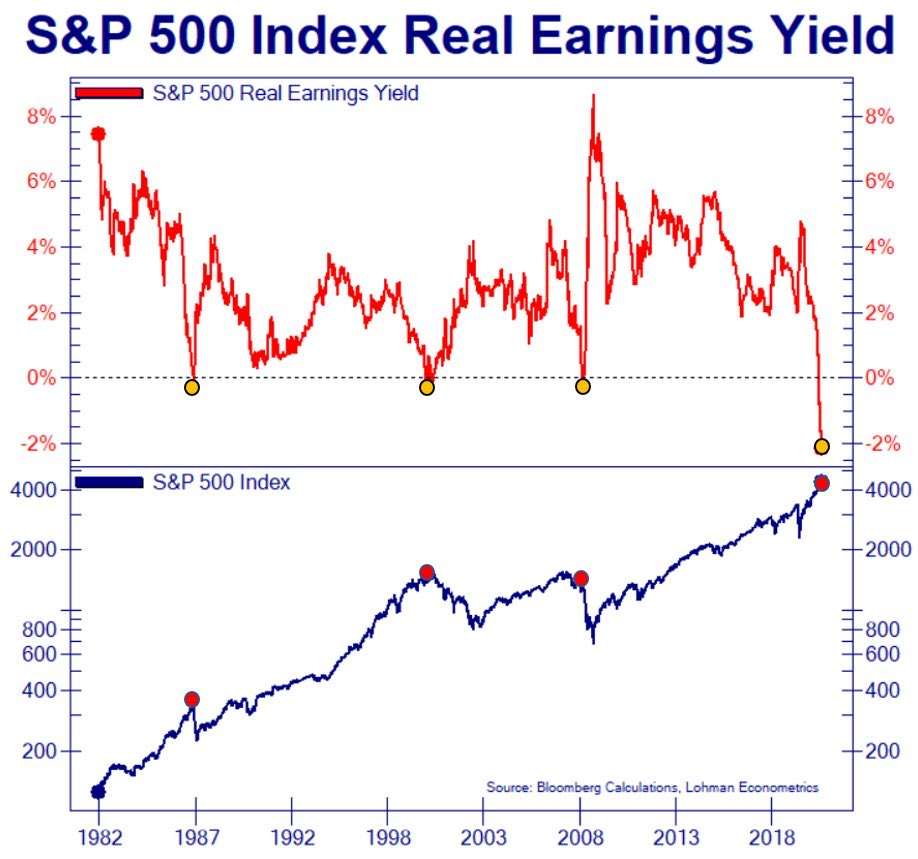 In theory, a plunge like this by real earnings yields has always coincided with a fall in the stock market... Today, however, the Fed has set itself the task of controlling the prices of assets. The bubble in the markets has grown too big to burst, and the market does not really believe that the Fed would simply sit back and watch it correct itself, without doing anything. Since 2008, the Fed has intervened to limit the corrections to bubbles that it has contributed towards forming, and the market is now convinced that the central bank will intervene again should the correction to the indices be too strong. This is also the feeling being maintained by the Fed, which is at the origin of the excessive valuation of assets...

Today, though, the fall in demand is unfolding in a climate of inflation that is taking root in real life. A rise in prices, a fall in industrial activity: we have entered an era of stagnation, in which everything we need increases and everything we produce goes into decline. 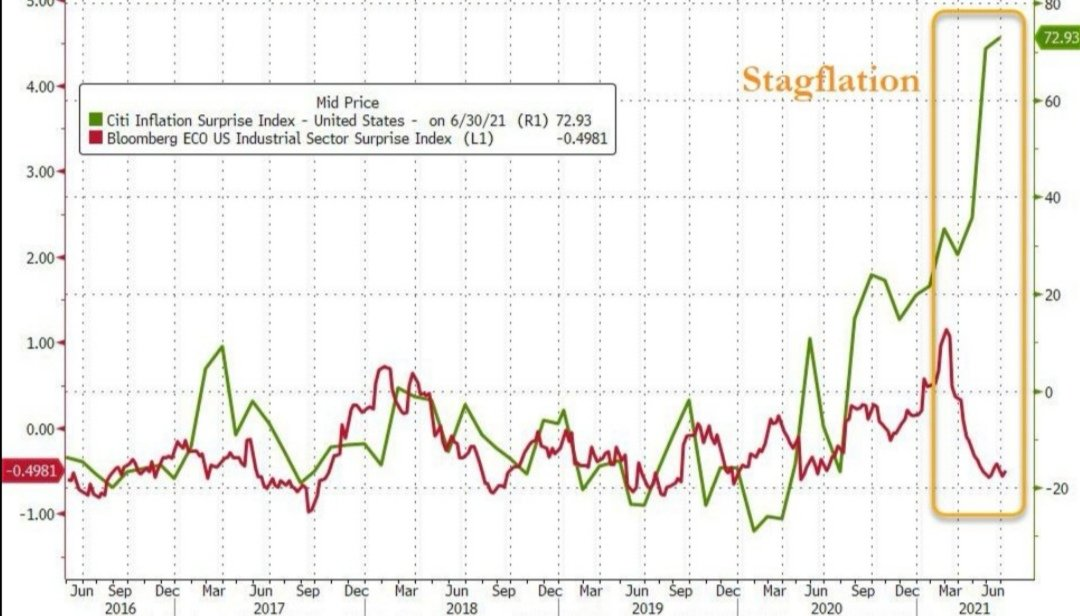 Needless to say, this is every government’s worst nightmare. An economic situation of this nature is very dangerous, and swift action must be taken.

Action must be taken with regard to both the demand and the inflation.

U.S. national debt is nearing the $30 trillion mark and is at an all-time high.

Jerome Powell warned recently that this spending trajectory was not viable for the United States in the long term. The president of the Fed is perhaps noticing that the controlling of yields in this expansionist fiscal policy poses a threat to the value of the dollar. Looking at the charts, the value of the greenback has begun a bearish divergence: 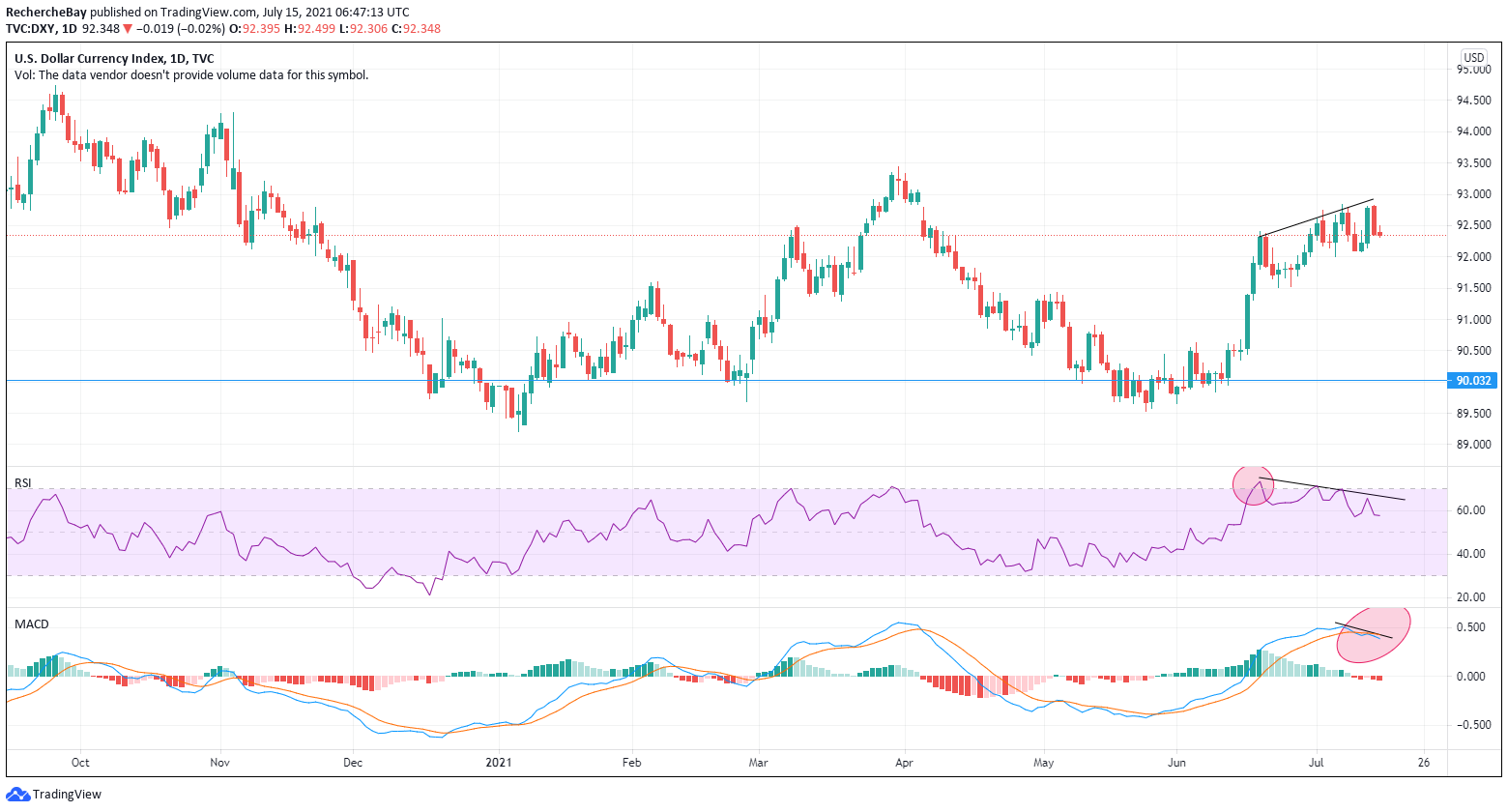 The dollar is on the point of being brought back down with the collapse of the yields that we have just noticed: 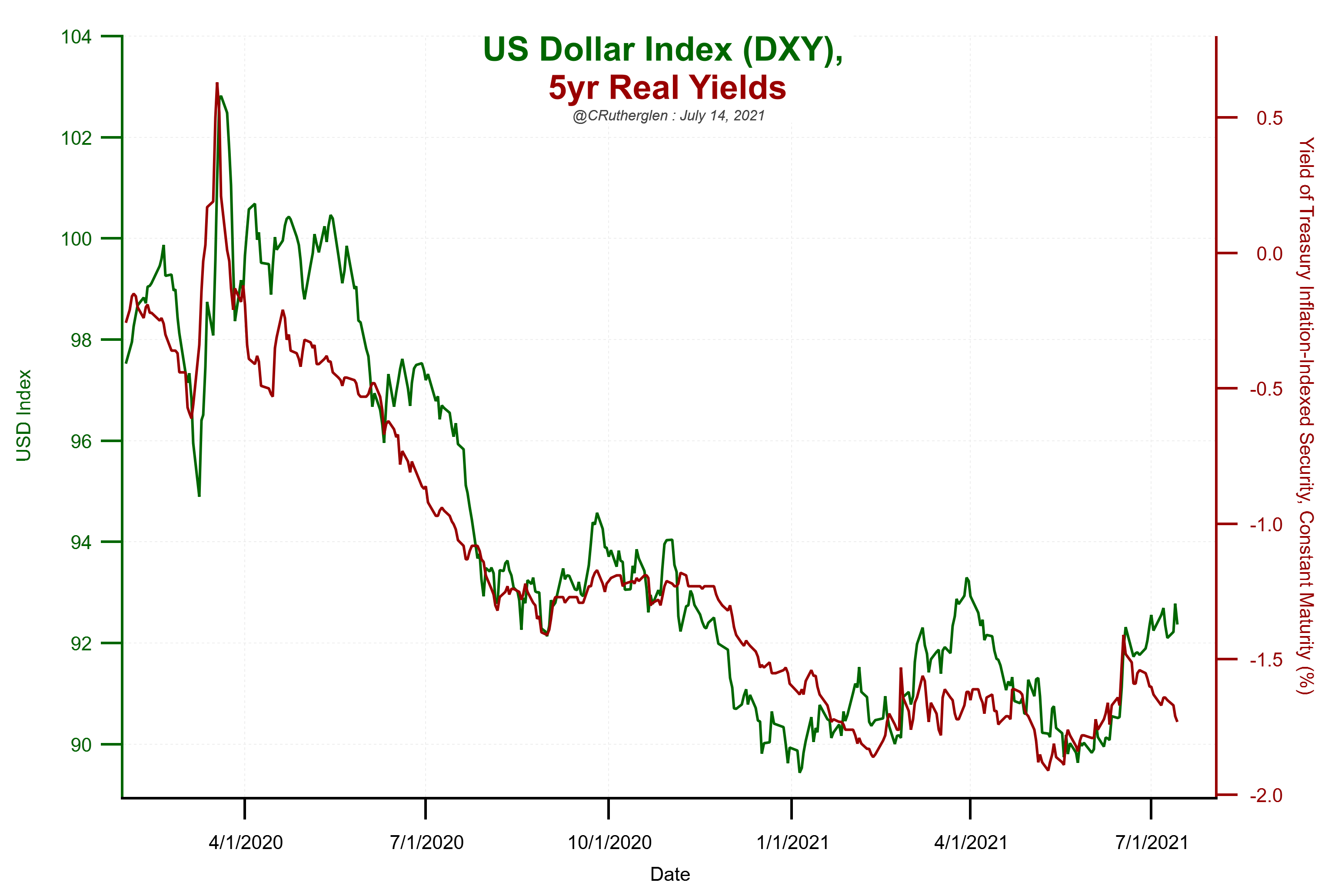 It is up to the Fed to take action on inflation.

For the time being, the central bank has decided not to act on the rates. There are still a few tools that the Fed can use to combat this perception of inflation.

The Fed can hammer home even more firmly its narrative about the transitory effect of inflation, or potentially act via the banks of its board of directors in operations involving sales of futures contracts on commodities, as we saw this week with oil. These ‘flash sales’ of futures contracts have a transitory effect, but do not overcome the perception as regards the duration of the inflation. Moreover, these sales on the futures are less and less effective on certain commodities.

The sales of futures on gold, which have appeared on a daily basis since the shutting down of fixing in London, are not having enough of an impact on the gold prices. Indeed, the prices are still above $1800, and that’s despite the systematic shelling carried out in this battle by the monetary authorities to try to bust the perception of inflation. The bullion banks are going to have to use a far bigger bazooka to actually break through the support of the $1800 prices. That will require a weapon comparable to the one used in the silver market. Last week, in the space of 24 hours, the bullion banks sold the equivalent of a year’s worth of production of silver to make the prices for this metal fall below $25.

As an aside, the very fact that the authorities would authorize such a leveraging effect on the paper market in relation to the physical market is one of the big questions that will need to be asked, once this masquerade has finished and a genuine ‘price discovery’ system is finally put in place. The regulation bodies are not fulfilling their mission when they allow a casino like this to develop, in place of a transparent and functional market. It is damaging for investors, for producers and for the very credibility of the COMEX.

The sales of futures on the COMEX market, now seen almost every day, are colliding with a background trend for the purchasing of gold by the other central banks, which are starting to lose patience and want to cover themselves in relation to the risks of devaluation of their assets in terms of state bonds and currencies, which are significantly impacted by the current levels of inflation.

Gold, indeed, carries no counterpart risk whatsoever. It is at the basis of the confidence that the market has in a nation, and serves as a monetary reserve that is crucial to said country in the event of a serious crisis. In a context where the future value of state bonds is in doubt, one would normally expect to see gold go back to being an essential asset to hold for a central bank.

Brazil added 41.8 tons of gold to its reserves in June, in what was its biggest purchase since 2000. Brazil’s gold reserves are at their highest for 20 years.

Since the start of the year, Russia has accumulated gold via its sovereign fund. As for India, it has increased its reserves by almost 50 tons since January.

China has not yet published its recent purchases and we will need to keep a close eye on the rise in its reserves, in an environment going through as much turmoil as this.

Gold is still a fairly inexpensive asset in relation to the level of the U.S. real yields, and this is making the task of controlling its prices even more difficult: 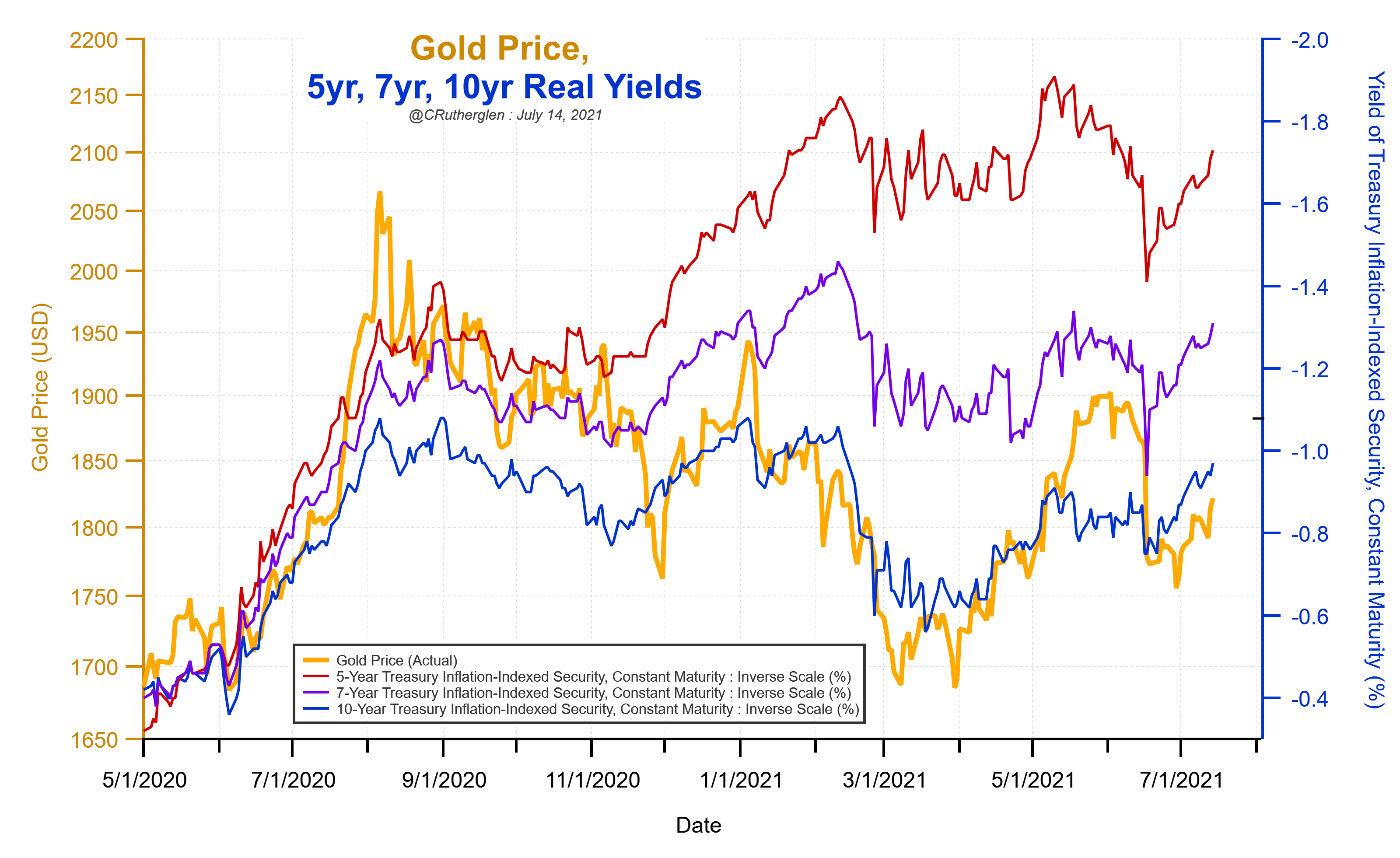 On the charts, gold has come back to test its MA 200 again: 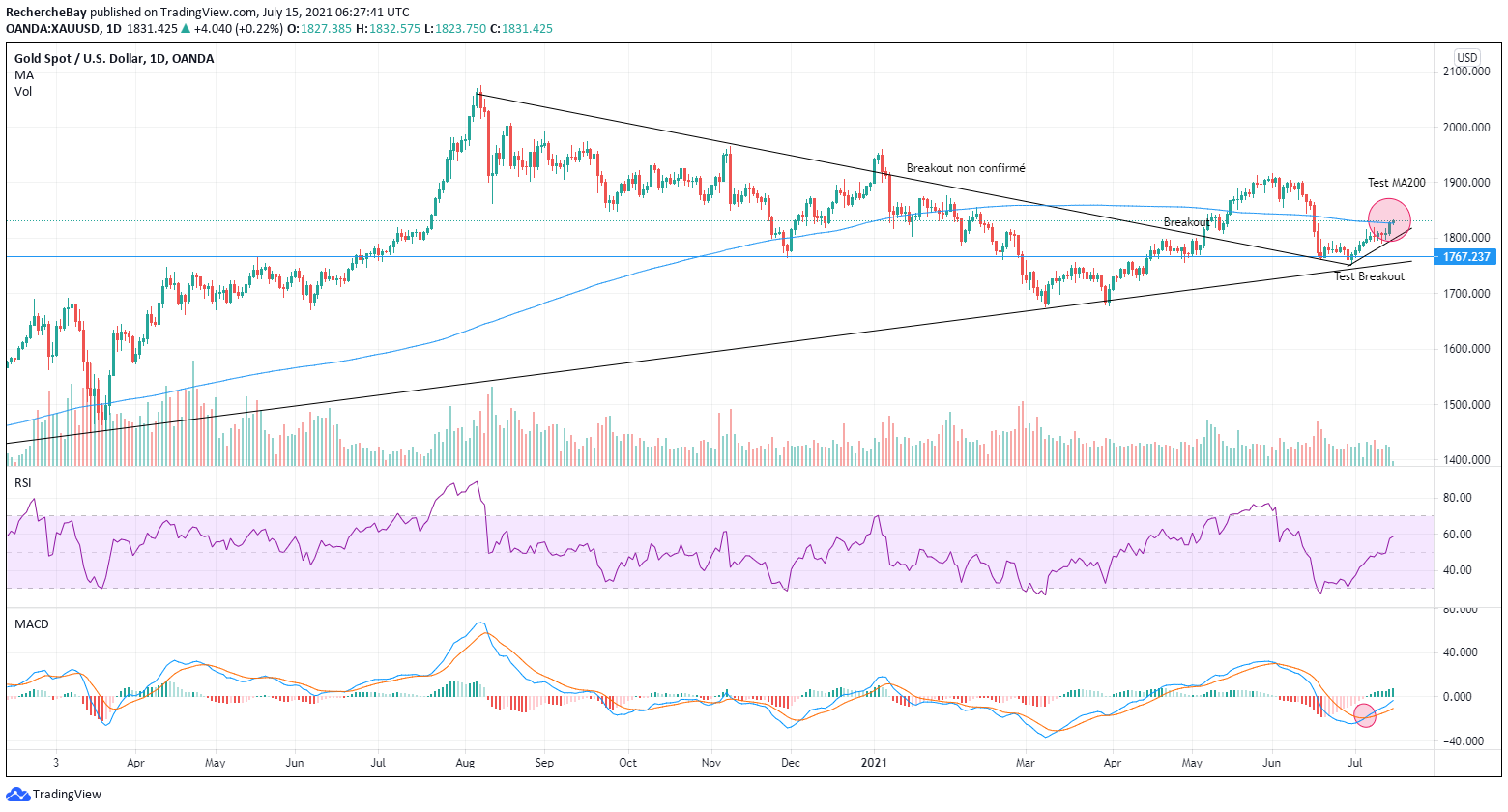 A very bullish ‘Inverted head and shoulders’ figure is in the process of being drawn: 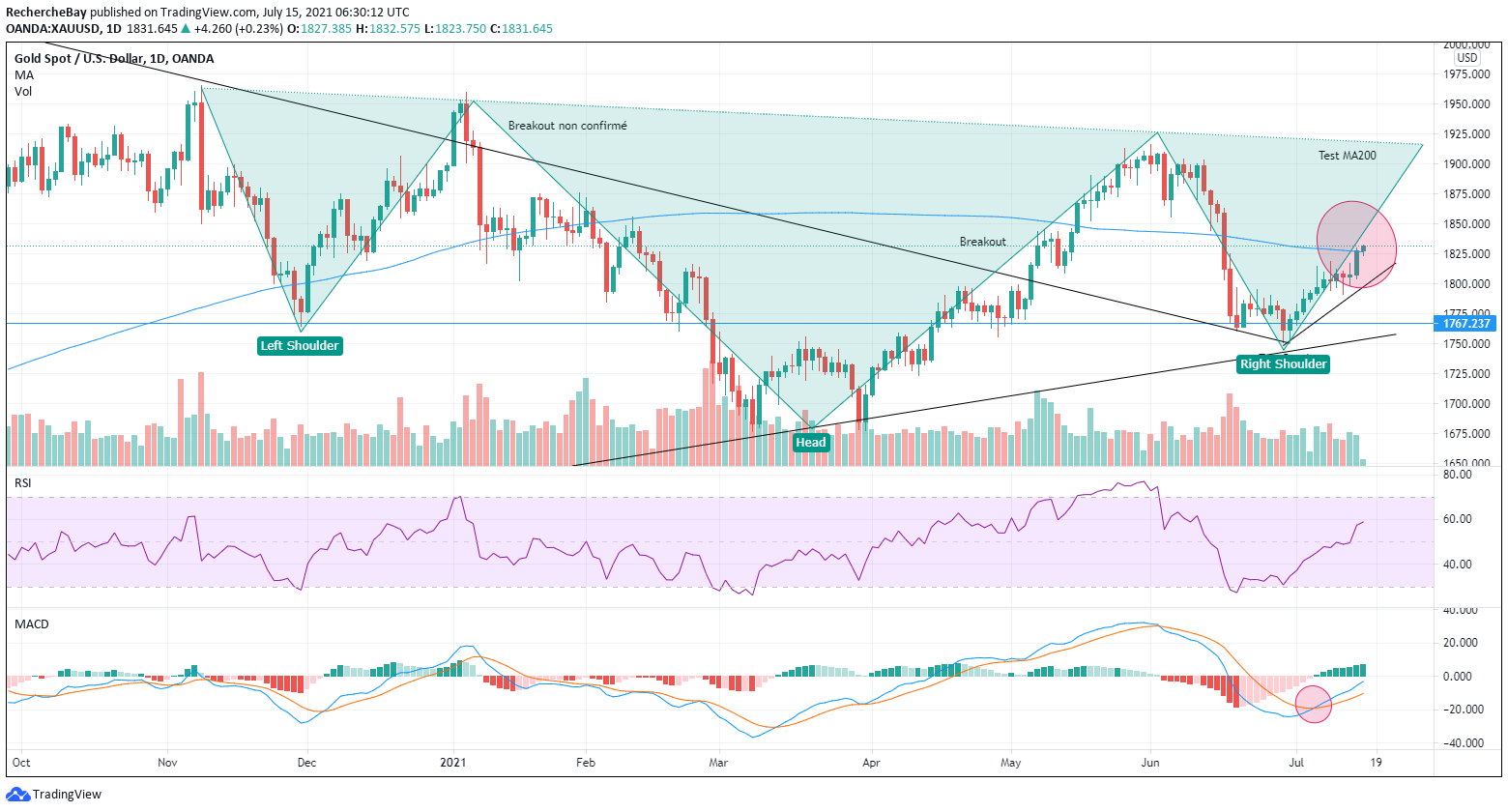 In these circumstances, one can well understand the energy that the bullion banks are expending every day to break the rise to this level.

The mining stocks, in any case, are anticipating the expected success of the operation to bring gold below $1800. The correction to the GDX index has plunged the sector into a depression comparable to the one in 2020... 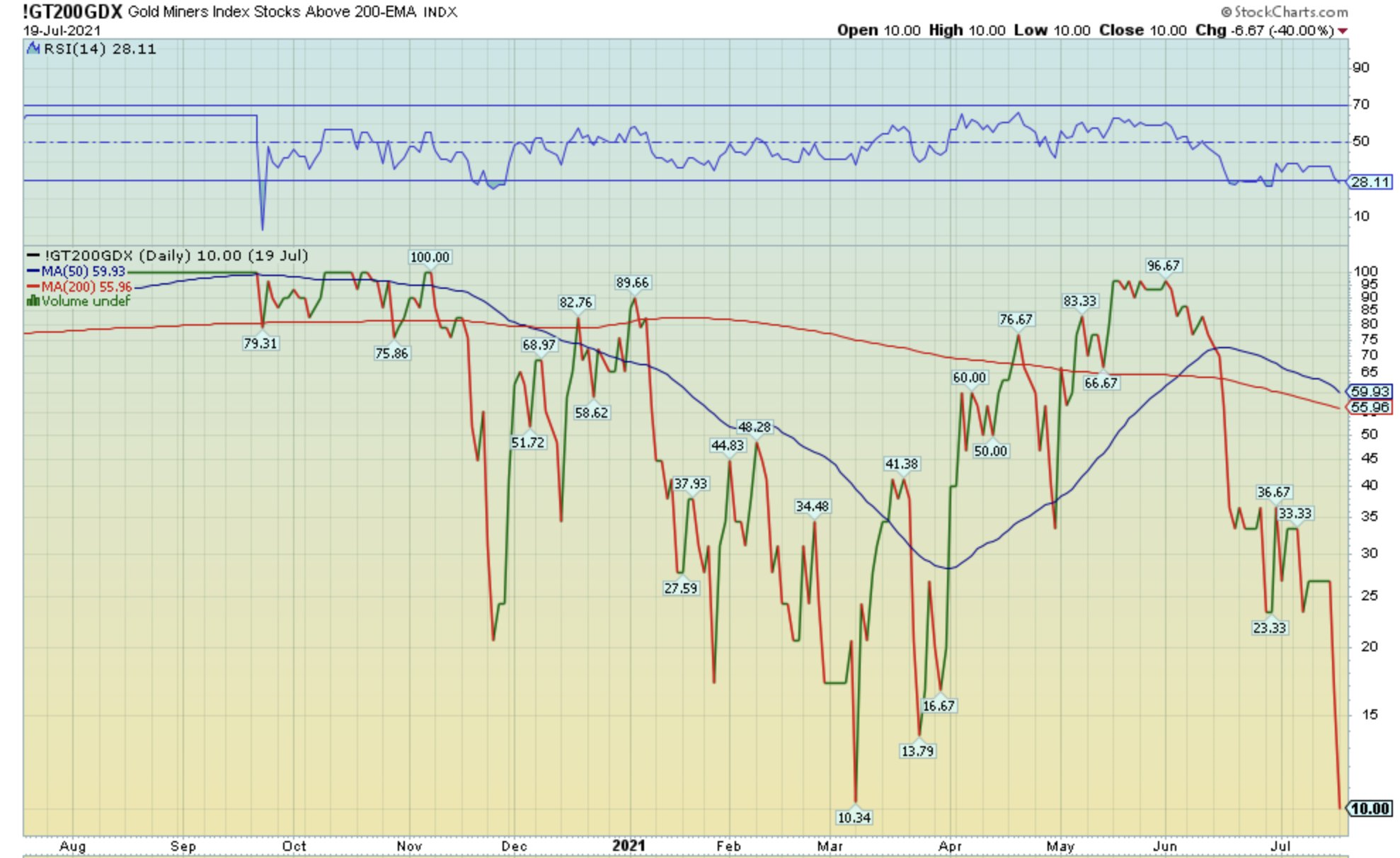 The mining stocks are expecting a correction to gold that is still reluctant to come, meaning that there is a whole new degree of difficulty, and a bigger one than normal, in controlling the gold prices.

The volumes on these mining stocks are not yet anticipating the end of the bombardments on the COMEX. I prefer to keep some ammunition deep down in my bunker!