Is Inflation Transitory or Persistent?

The further we progress into this new inflationary cycle, the more we are seeing the collision of two very distinct theories about the economic period we are going through.

​Every economic news story can be interpreted differently by these two opposing camps.

The Fed’s supporters cite the economic successes of the reforms initiated last year.

Optimism in the business climate, as measured by the Chicago Business Barometer, is at its highest level since the start of this century: 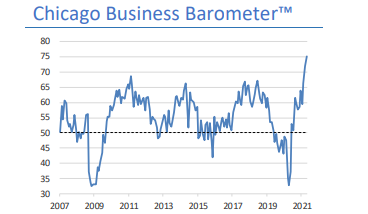 The payroll change level in the United States is also back in the green: 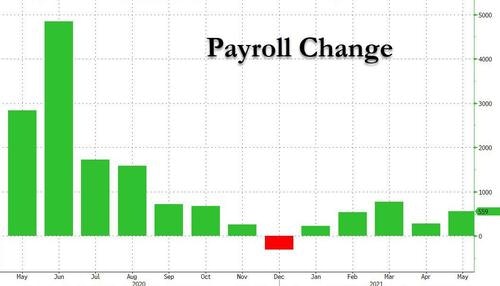 The news is even better on the salary level front. In just one month, the average hourly wage has risen by 2%, whereas a rise of 1.6% was expected. This rise was just 0.4% the previous month. Seen through the first prism, that of the Fed, one could see in this figure the success of the monetary recovery program: the recovery is finally being passed on to the poorest classes, who are benefiting from a significant hike in their salaries at a time when job offers are on the rise again.

Conversely, the economists who are raising the alarm about the dangers of the Fed’s current policy have a different take on these figures. For them, the figure for average wages is not good news. For these economists, it is proof that inflation has entered its third stage. As a reminder, the inflationary cycle starts with a hike in demand (first stage of the cycle), then moves on to a hike in prices (second stage), which then results in a hike in salaries (third stage). This third part of the inflationary cycle precedes the final stage, the most dangerous one of all: shortage.

This phenomenon is even more significant when the hike is as brutal as it has been, and attacks so many actors from the rear. The economists are alarmed by the brutality of the rise and the fact that it took more or less everyone by surprise (even on the board of the Fed): 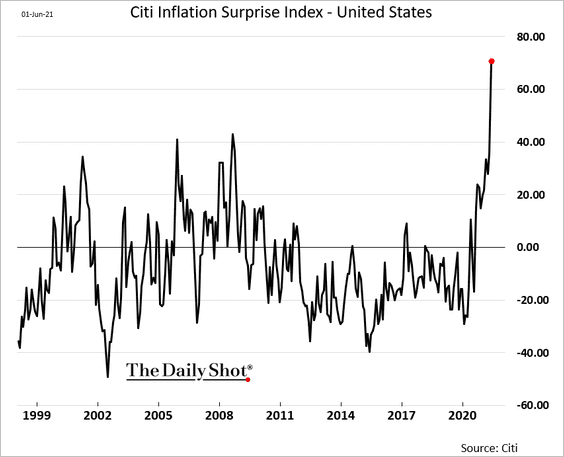 The dangerous stage of inflation is starting to make itself felt on the ground.

The first signs of a labor shortage can already be measured in numerous sectors. Small businesses are the ones most affected, and they are having problems recruiting staff. This is a situation not seen since the early ’80s: 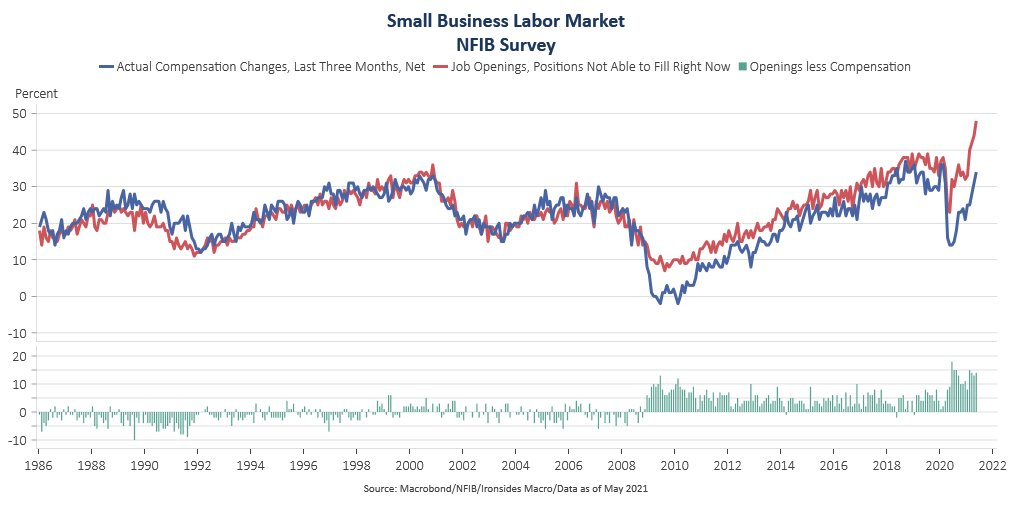 Economic activity has more or less returned to its pre-crisis levels (spending at U.S. hotels is already at 75% of the highest levels reached in 2019), but labor is not following suit, despite the increases in salaries.

The famous danger of “shortage” plagues an overly inflationary environment.

To answer these discordant voices on the risks of a return of inflation, the Fed keeps repeating that it has the tools to combat the unpleasant effects of the rise in prices in some sectors. Members of the Fed are even starting to mention the end of the policy of low rates and purchases of the central bank’s assets.

The next meeting of the Fed will be scrutinized and pored over. The defenders of the “transitory” view of this new inflationary cycle won’t fail to find evidence, in the report on this meeting, of the scheduled end of the accommodating policy.

Right now, the Fed can only indulge in words, not actions.

Committing to a reduction in purchases of assets and a hike in rates is mathematically impossible, if the Biden administration’s latest budget is to be believed. 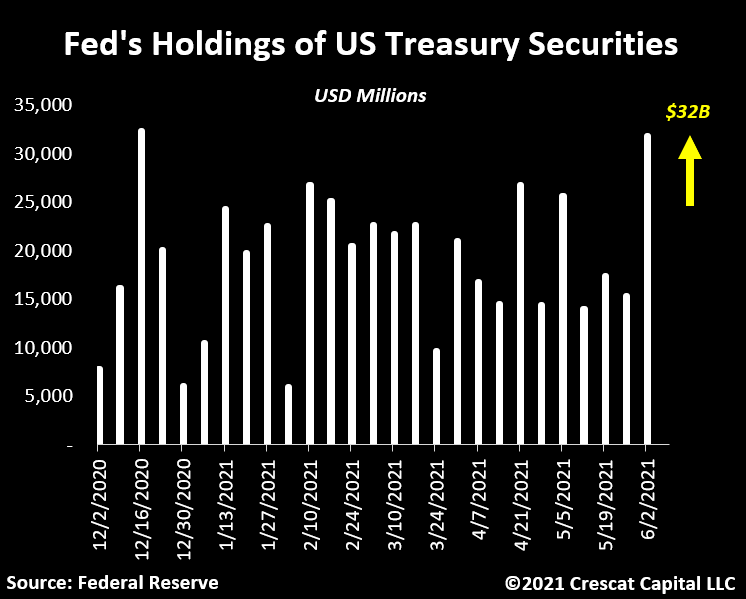 It is now 4 weeks, meanwhile, since the Fed relaunched its Repo program, and the amounts purchased, whether from financial institutions or otherwise, are rising constantly; this program is now going to be installed on a permanent basis. 8 June marks a record of $500 billion being exchanged in a single day with the Fed, in this Repos program.

Let’s look at some of the details of this budget for the period 2022-2031. It is built on the following hypotheses:

In other words, Biden is explicitly asking the Fed to keep real rates negative, even with a period of full employment throughout the next 10 years!

Over the next two weeks, the markets will have fun reacting in the short-term to the inflation figures (published this Thursday) or to the syntax of the reports on the Fed’s meeting (next Wednesday).

The long-term reality, though, is that President Biden himself is forcing the Fed to act in exactly the opposite way to what it will be forced to promise, to reassure the markets.

The monetary policy is not ready to change. This is doubtless the reason why numerous voices are starting to cast doubt over the transitory nature of the inflation we are seeing.

In Europe, this inflation is being measured above all on the energy prices:

People are no doubt paying greater heed to the economists from Deutsche Bank in Germany: the country hasn’t even got out of the sanitary crisis yet, but budgetary rigor is already in place. It is out of the question to envision any kind of return of inflation to a country still traumatized by the experience it lived through three generations prior to this one.

The German government is planning to return to a zero deficit in 2023; the country’s budgetary situation will thus get back to normal far more quickly than that of its European neighbors.

The Germans seem to be out of kilter with the economists from the central banks on the question of inflation. A sign of this can be found in the Germans’ relationship to savings, which is very clearly distinguishable from that of the other western countries.

The perception of the risk of a monetary crisis is far more in evidence in Germany: the Germans hold more than 9 000 tons of gold in coins or bars, and that is even more than the BundesBank holds in its vaults!

The Germans are stocking up gold: in so doing, they are imitating the majority of the central banks, which have resumed their purchases of gold in earnest in the last few months, increasing their reserves by almost 70 tons in April. In total, 165 tons of gold have been added to their vaults since last January.

China, in particular, is being very active in the gold market: its reserves rose from $110 billion in April to $119 billion at the end of May.

The silver rush is even more spectacular. The Silver Institute predicts that the global demand for silver, propelled by a record amount of investment in the sector, will reach just over 7% of annual production in 2021. The body is expecting a rise of almost 30% in the silver price due to this upcoming shortage.

And since it is primarily investors that are snapping up the supply, the stocks of metal originating from mining production that is left for the industrial firms has fallen very substantially over the last few months: 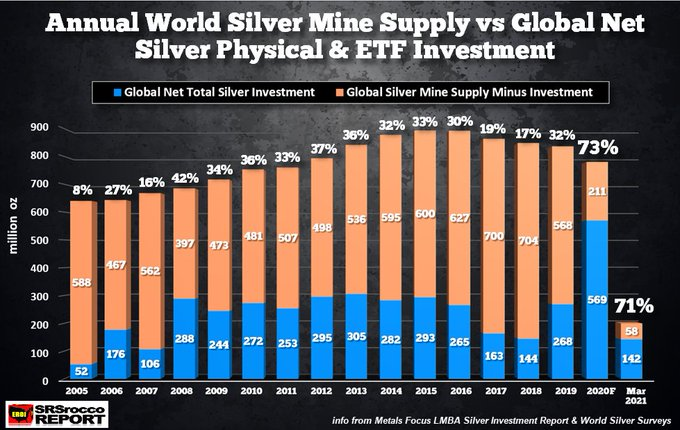 A significant rise in the silver prices would make it possible to put this investment silver back on the market... but the particular situation silver is in is preventing this re-evaluation of prices from happening.

We have talked about it at length in our articles… the futures market controls the prices, more so than the law of supply and demand.

In the futures market, 5 banks are sitting on nearly 40 000 “short” contracts with a maturity in June. What’s more, they have added almost 3000 contracts to these positions since last month, after an increase of said short positions in March.

The rise in the price of silver would lead to massive losses on the short positions of these banks, which have no other option but to increase these loss-making positions each time the price of the metal is revised upwards.

These banks are starting to dream that the market will ultimately accept the transitory effect of the inflation by curtailing the speculation on commodities and on silver, and then that they will be able to foist their short positions onto new bearish speculators on commodities. To protect their positions, it is in their interests for the Fed’s promises to succeed in convincing the market (even in the short term!) of the transitory nature of the inflation.

The charts for gold and silver remind us, today, of this very close match on the precious metals market. Gold is very volatile, fluctuating around the $1900 level. 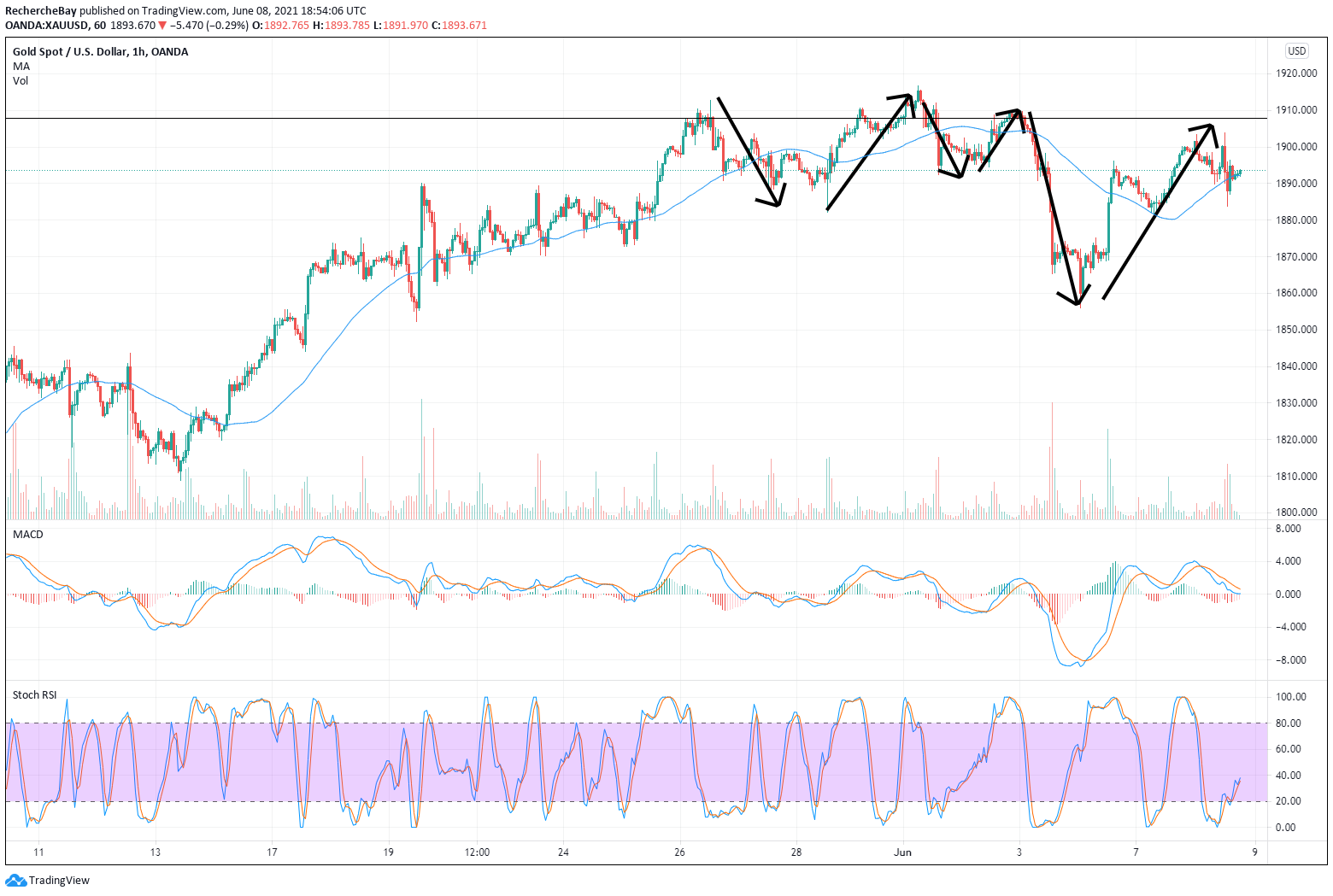 Silver is even more volatile, with no fewer than 5 spoofings in a row this week, all of which were bought. 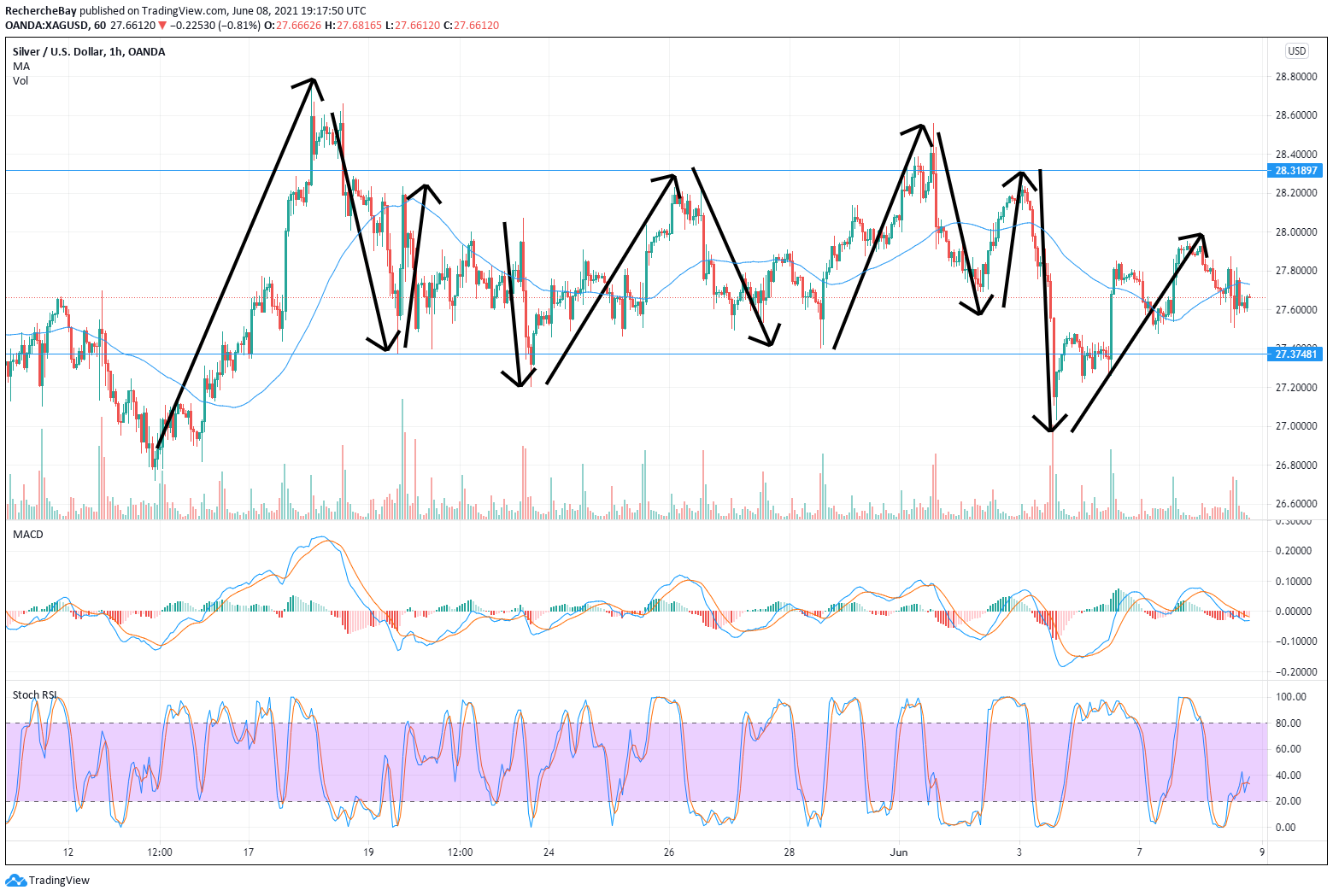 This “match” between the two camps (the inflationists versus those who are convinced of the transitory impact of the rise in prices) is leading, as one would logically expect, to this very volatile phase.

For its part, the U.S. dollar is technically over-sold and the last time we saw as many short positions on the DXY index as this, a fairly strong recovery by the U.S. currency ensued. Generally speaking, a rise in the dollar, even in the short term, has a fairly negative impact on the gold price… and this is a strong argument in the short-term bearish speculators’ favor.

But gold also somewhat of a tendency to follow the curve of the real rates. As we saw above, we are a long way from seeing these real rates rise again...

The people buying gold at these levels think that neither the monetary devaluation, nor the inflation it is generating, are ready to stop any time soon. The Basel III maturity is also limiting the short pressure on gold, because the bearish speculators are constrained by the number of positions they can now open in relation to the collateral at their disposal. In sum, that means there are lots of elements that are propping up the prices and limiting the correction of the precious metals.

The coming weeks will see this closely-fought match between the two camps unfold.

A little glance at the gold stocks: the mining stocks are on their MA50 support in relation to gold. 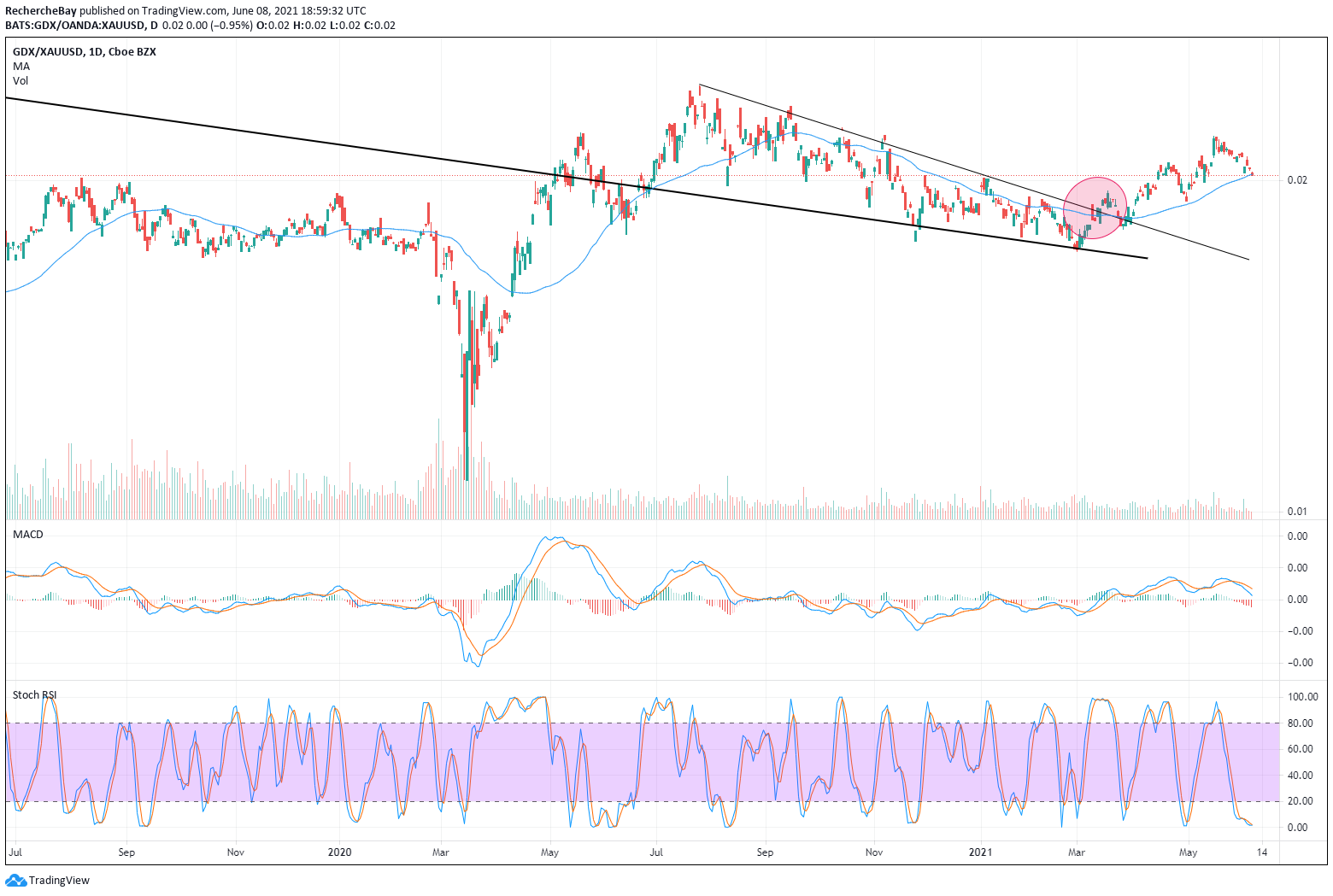 The GDX index has begun an ABCD rebound from its bearish correction; the first target of this harmonious figure is 38% of the AD leg, a smidge below the current level and right on the MA50: 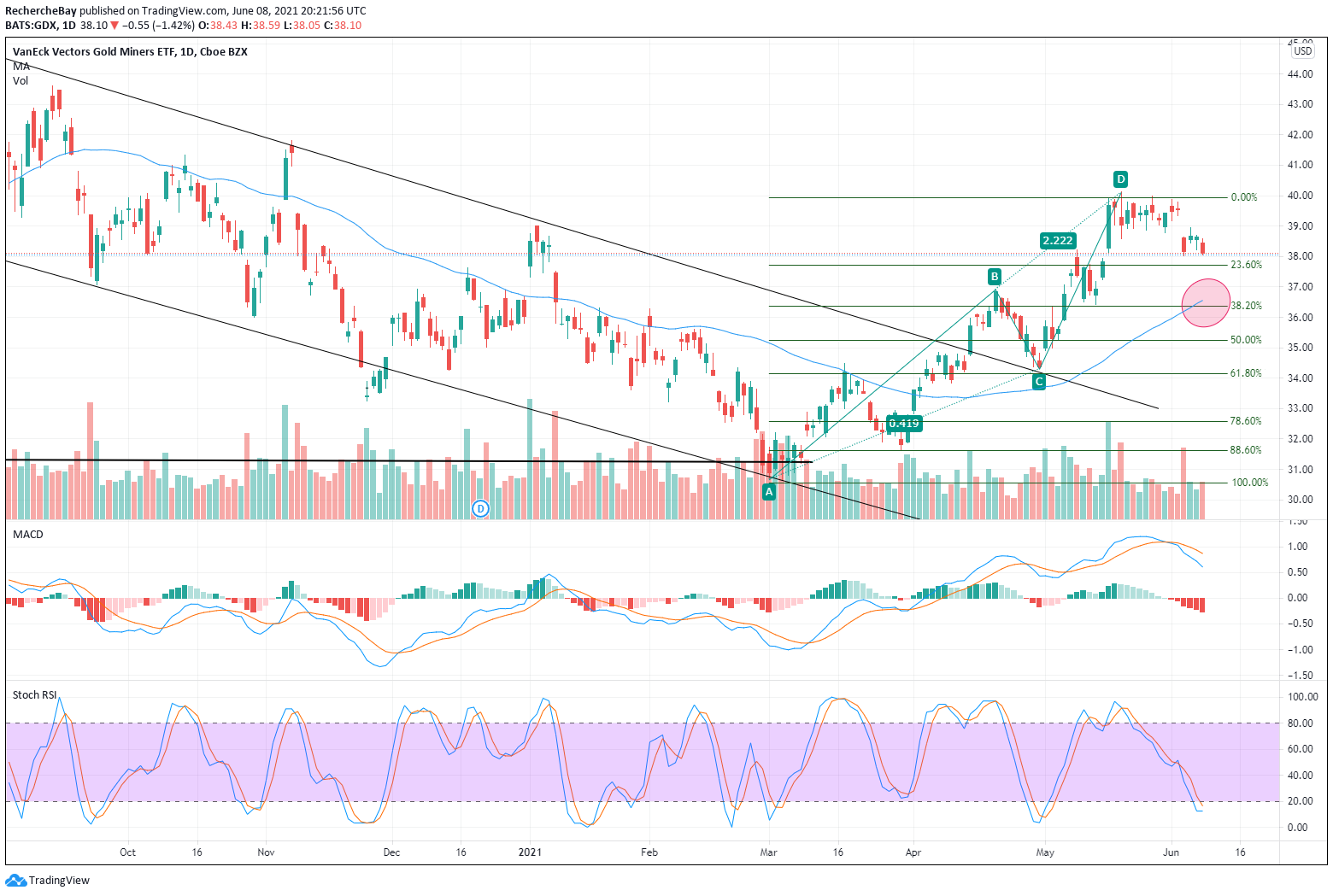 All those who, like me, are expecting a more significant correction of the mining stocks to finish their purchases are hoping that the second target, at 67% of this figure, will be reached, but nothing is certain at this stage in this bullish mining stocks market.