For months, the IMF had been in agreement with the Fed about inflation being transitory. This week, the IMF has been forced to admit that this transitory period is going to last longer than expected.

Indeed, the IMF must now plan for a period of significant inflation, for a long time to come.

The figure that is causing particular consternation for the IMF has to do with the rise in food prices: globally, the rise was 4.8% in May, i.e. 40% higher than the same time last year. The FAO Food Price Index is at its highest since 2011.

In the United States, the latest CPI figure, published Tuesday, is a shock for those who put their faith in the reassuring statements coming from the Fed. Inflation is accelerating, with a rise in the CPI index of +0.9% in June, a long way from the +0.5% that was forecast. That is a rise of +5.4% (as against the +4.8% that was expected) on the same month last year. The annualized increase is now in excess of 11%, and it is going to take a lot of energy for the Fed and its chairman to carry on promising that this inflation will be contained without some immediate and decisive action on the rates.

For the time being, Jerome Powell does not need to be too worried; so far, none of his monetary decisions have been called into question. A survey conducted by Bank of America reveals, in fact, that more than 70% of those questioned believe this inflation to be transitory. The message repeated for so long by the monetary authorities has become firmly rooted in people’s minds...

On the ground, however, perceptions are starting to differ.

As an explanation for the inflation, the excuse of the sanitary crisis, which contributed to changes to the production chain, is now a convenient scapegoat.

The U.S. housing market is overheated and it has never risen as quickly as it is rising now. And this rise is directly connected to the action taken by the Fed.

The central banks ‘boosted’ demand in an artificial way: mortgage payments are currently at an all-time low compared to other sources of disposable income. 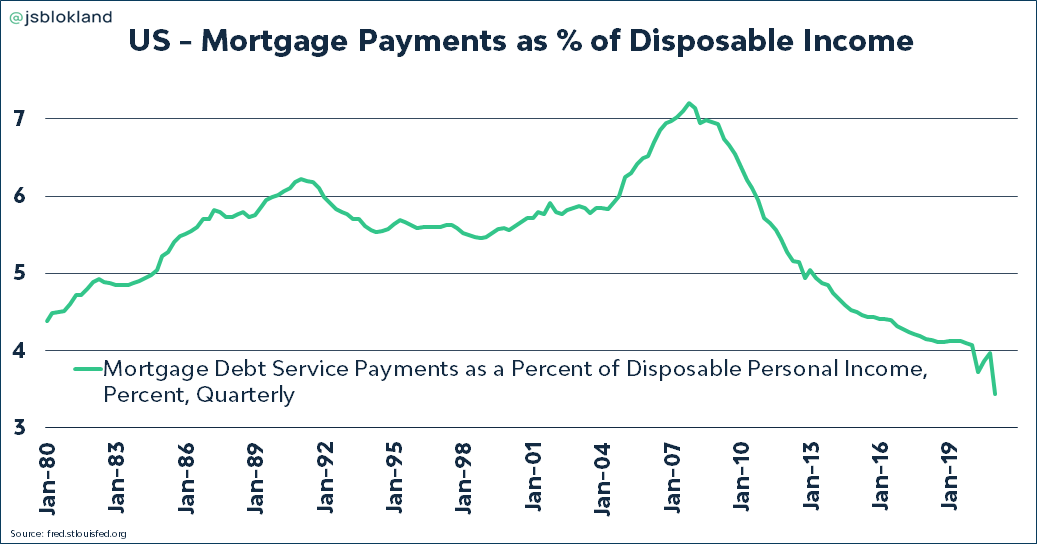 That’s what is driving the current rise in the housing market. At a time when inflation is starting to accelerate, the most affluent members of society, who were treated favorably by the Fed’s monetary policy, are automatically raising the offers of first-time house buyers. In the United States, we are even starting to see the concept of day trading in real estate, with some properties changing hands twice on the same day! And, as is often the case in phases of rapid inflation like this, the investment banks are also setting about buying real estate.

The Fed, by pursuing its program of buying up MBS securities in such an environment, is maintaining the absurd overheating of a sector that it has already done much to take to artificially high values.

In relation to the level of wages, rents are now on a dangerously steep climb. 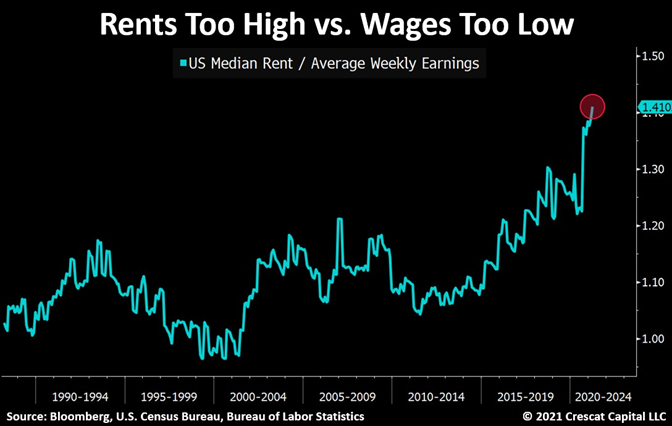 It has become virtually impossible to find low-skilled workers in certain over-stretched areas in the United States.

But the housing sector is not the only one where the phenomenon is making itself felt. Inflation is now palpable, from one week to the next, in everyday purchases. There is a run on gas stations by the American people, in expectation of a coming price rise. GasBuddy reports a 4.7% rise in demand in just one week, to a level that is 6% higher than the average over the last 4 weeks. This is the biggest rise in demand at the pump since 2019.

In the current phase, in which inflation is accelerating, the level of prices is becoming quite difficult to set in the short term. The traditional methods of “price discovery” through the law of supply and demand are starting to be eroded. Here again, we are looking at a direct consequence of the actions of monetary interventions. This is even more noticeable in the market for dubious bonds, those notorious Junk Bonds, whose yields are currently lower than inflation! A company with no customers and no income can borrow money below the real rate of inflation! An operation that is quite simply impossible without an intervention by the Fed on the rates. The demand created by zombie companies of this kind is completely artificial and is, in turn, keeping the rise in prices going.

The debt monetization initiated by the central banks is now reaching almost $25 trillion, and one can clearly see this monetization starting to have a decisive and irreversible effect on the level of inflation.

Just to put things into perspective: Combined balance sheets of #Fed, #BoJ and #ECB have hit fresh ATH at almost $24tn. Since the financial crisis of 2008, the amount has increased sixfold! pic.twitter.com/wZ8mtuHzDb

At this level, it’s very simple: either the central banks keep on pretending that this monetization is having no impact and let inflation take its course, and catastrophe is averted, or they acknowledge just how dangerous the phenomenon is in real life and determine, instead, to act immediately to stop this phase - a phase that has seen the biggest expansion of their balance sheets in their history - dead in its tracks. The logical consequence of this move would be the bursting of the financial bubble - this bubble, too, has the distinction of being the biggest in history.

Any other move would merely be incidental, in fact. Any equivocation, any attempt to provide reassurance or play for time, and any hesitation would come at a cost that we would have to pay in our daily shopping, wherever we might be in the world.

For in our globalized economy, this inflation is contagious.

In Germany, inflation is spreading to the housing market in exponential fashion: 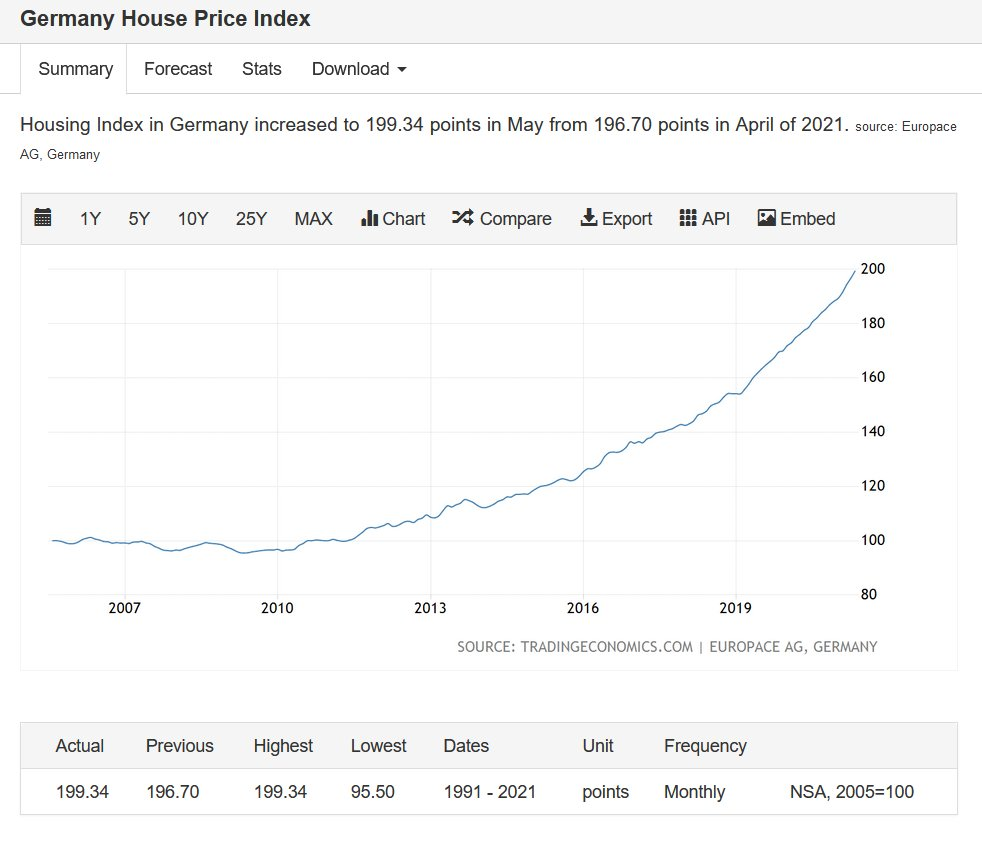 The gold prices are not yet benefiting from a demand that aims to hedge against this accelerating inflation.

The prices are directly in the grip of the futures market. On 7 July, 2 million contracts were sold in 1 minute in yet another spoofing attack, without a single ounce of gold being exchanged. 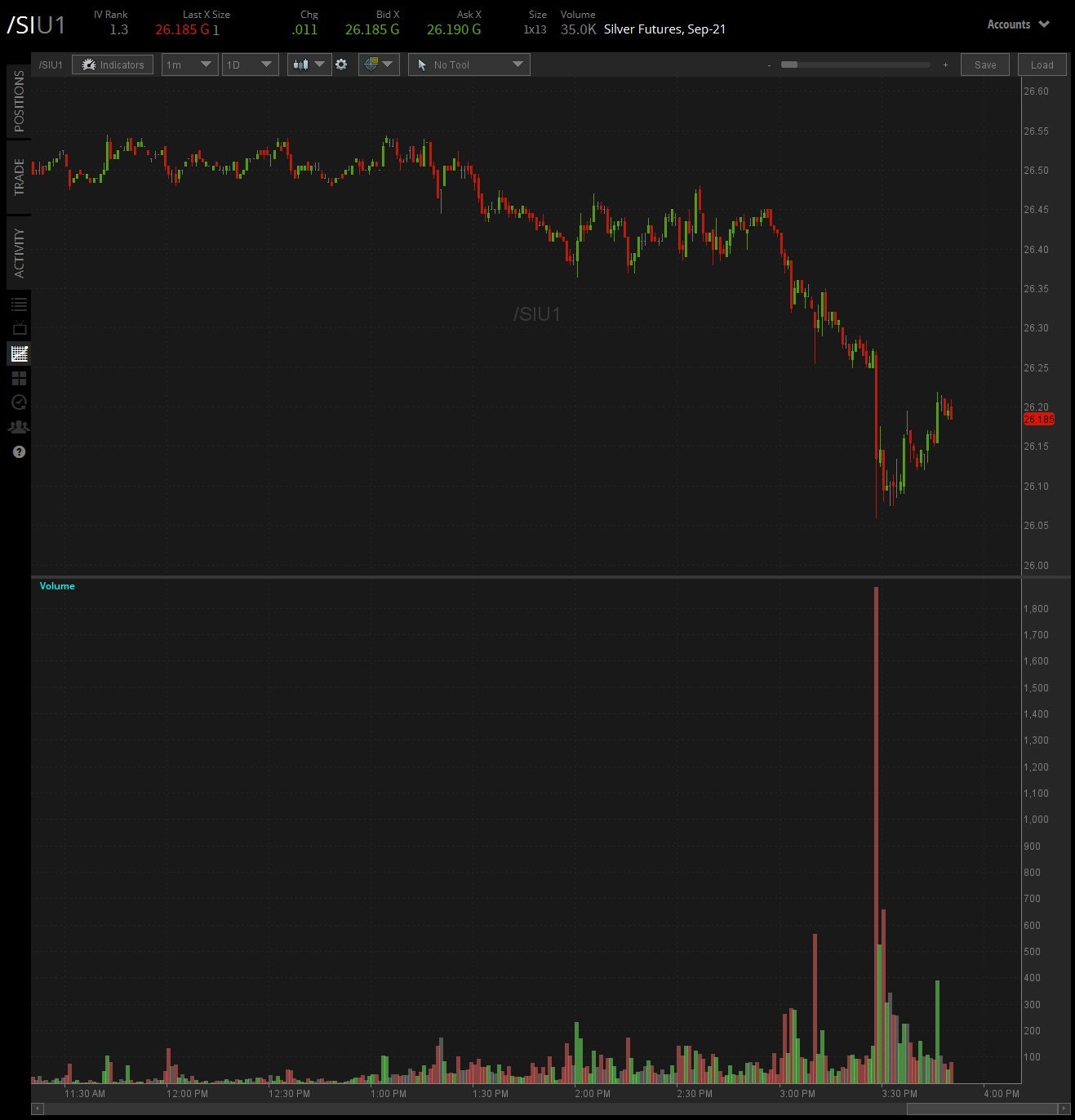 Like many fixed-income securities, the gold prices are completely detached from supply and demand. The mechanism for determining prices is distorted by ‘tools’ that enable the monetary authorities to alter the perception of their inflationary monetary policies.

These tools are perhaps breaking the markets’ perception as regards the return of inflation, but at any rate they are not enabling action to be taken on the physical stocks, which are continuing to be eroded.

As is always the way, these ‘flushes’ on the futures markets are bringing new opportunities for increasingly numerous physical deliveries.

In India, demand for gold is seeing a resurgence:

In China, demand in the technology sector has dried up... 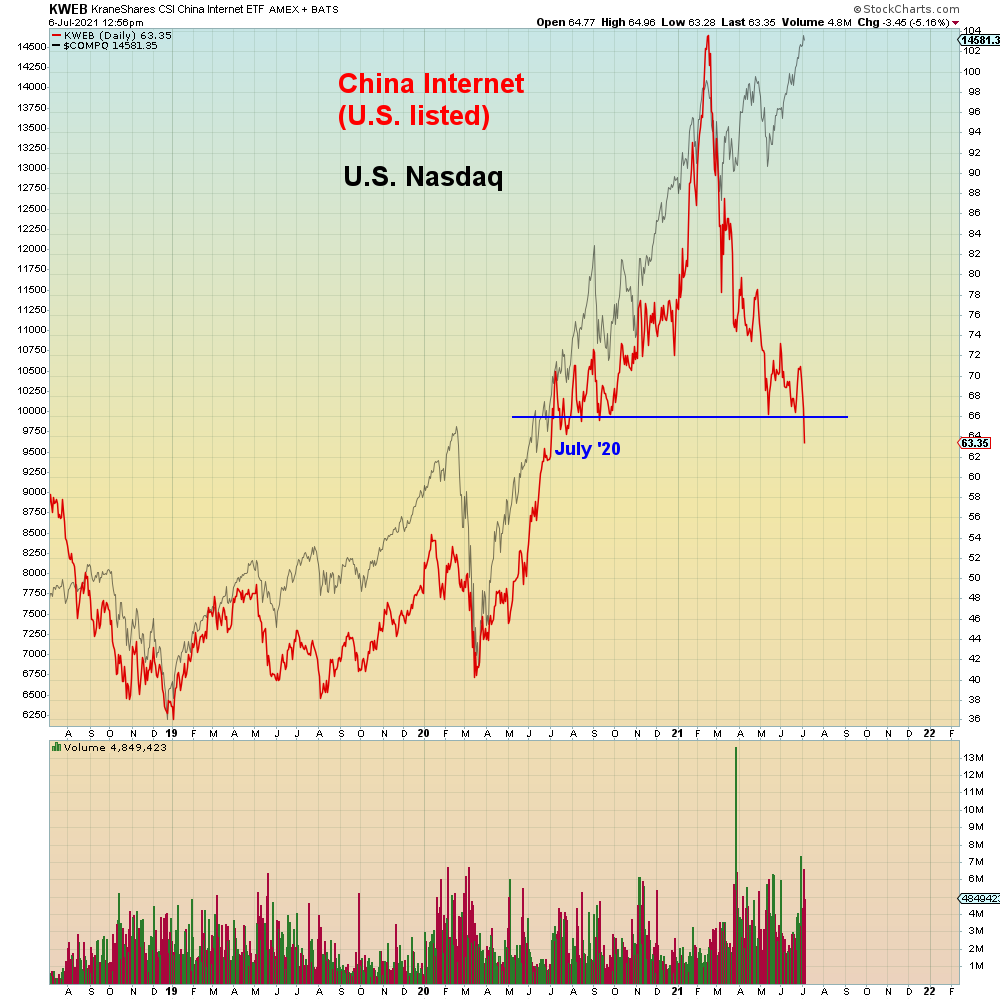 ...but demand for physical gold is on the increase: over 130 tons of gold were delivered to Shanghai, a rise of 25% on the previous month.

On the Comex, it is silver, above all, that is benefiting from a genuine rush: since last February and the launch of the Silver Short Squeeze, almost 50 million ounces have been withdrawn from the stocks of the futures market. There are now only 150 million ounces left.

The controlling of futures prices is happening at the cost of a historic draining of bars of precious metal. By protecting the rise in these prices, the banks are preparing for the big shortage in metals that will soon be with us, particularly when it comes to physical silver, which, by contrast with the other metals, is at a ridiculous price compared to its 1980 high:

This controlling of the prices of precious metals is also putting the holders of metals accounts in an unprecedented situation. The level of remortgaging and the leverage effect brought about by the sheer volume of paper contracts required in order to regulate the price of futures are putting significant limitations on delivery possibilities: there are more and more holders of delivery promises with less and less physical metal available, so it’s becoming a little like musical chairs. Even though most of the people holding these promises are not necessarily looking for physical exposure, in the event of a significant jump in the prices, the slightest demand for delivery from a minority would impose a significant risk on the suppliers of these contracts, thereby also endangering the other ‘paper’ clients of these suppliers.

It is precisely this type of risk that the Basel III proposal committed to countering, by asking the participants to significantly increase their physical collateral. Last week, the LBMA secured from the BoE the possibility of not applying the new rules, which would have forced the association to limit the volume of paper contracts available for its participants. That would, of course, have had an impact on the mechanism of the Comex’s futures market, which is founded on the LBMA’s ability to create this ‘liquidity’.

This news came as something of a bombshell in the ‘Gold Bugs’ community, who are still wondering why the London-based organization should be given preferential treatment compared to the other players in the market. Some investors were waiting for this agreement to be implemented, in the hope that it would lead to the establishment of a genuine physical market driven more by supply and demand. Since last week, high levels of disappointment in the "Gold Bugs" community have been noticeable. Gold is still in the grip of the futures market for the immediate future, and that is further strengthening negative sentiment in the sector.

Historically, it is in precisely these phases of great depression that I have made my best purchases!

At any rate, we are going to have to observe what kind of welcome the other marketplaces give to this favor bestowed on the LBMA, whereby it can set its own rules in a gold market increasingly open to markets in Asia and the Middle East.

Ultimately, it is always the one with the physical gold in his hands that sets the rules.