While the Bank of England seems to have succeeded in calming the bond crisis in the United Kingdom by deciding to postpone its asset sales program indefinitely, the tension remains palpable on the 10-year yield, which has not regained the very symbolic level of 100 points.

The BoE decided to buy back British securities to curb the spectacular fall in the Gilt, which had triggered a margin call on British pension funds. 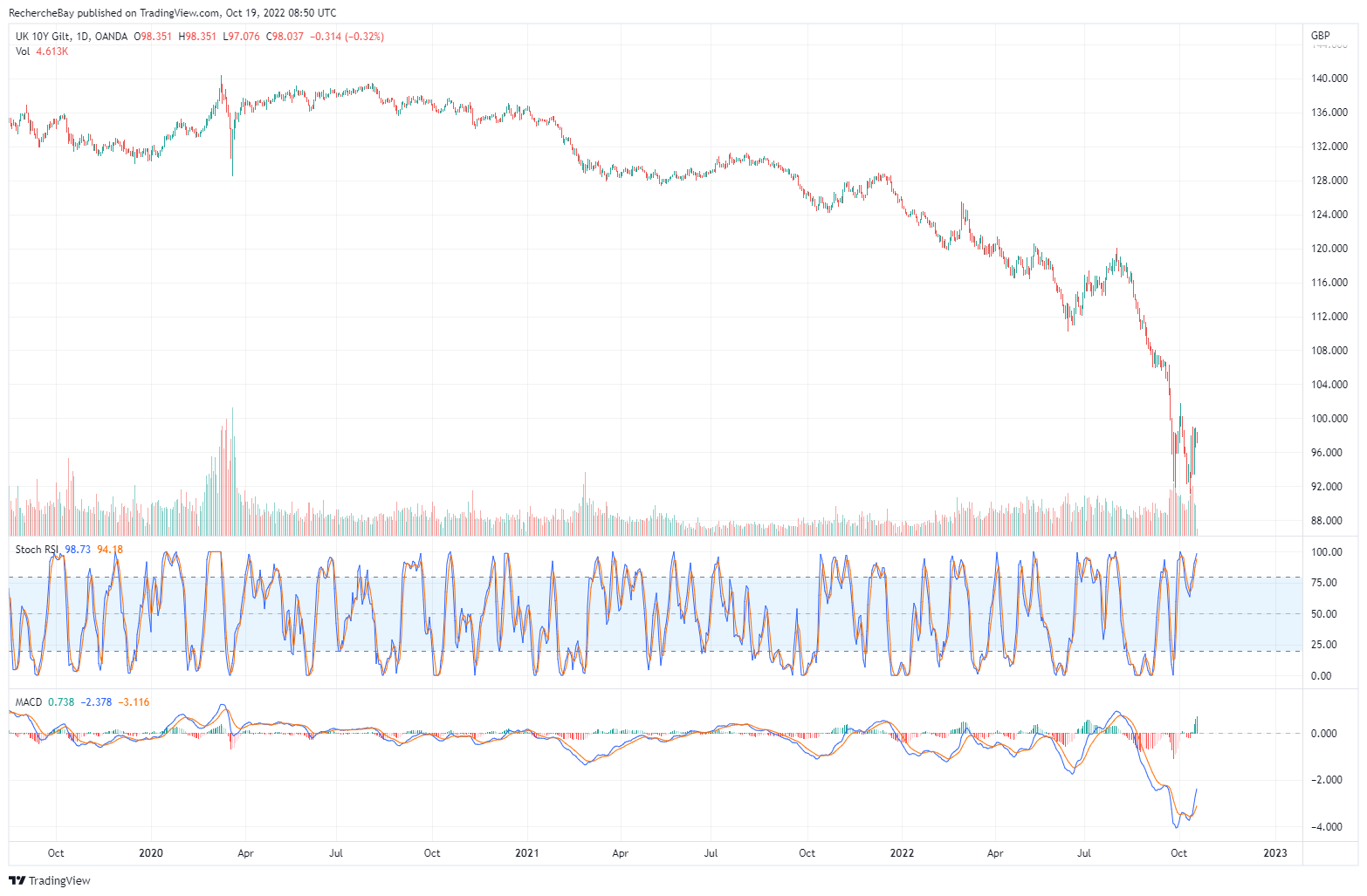 The crisis then spread to the German bond sector. With the promises of fiscal aid conceded by the government to help German industry overcome the energy crisis, the Bund has collapsed and is currently testing its lows: 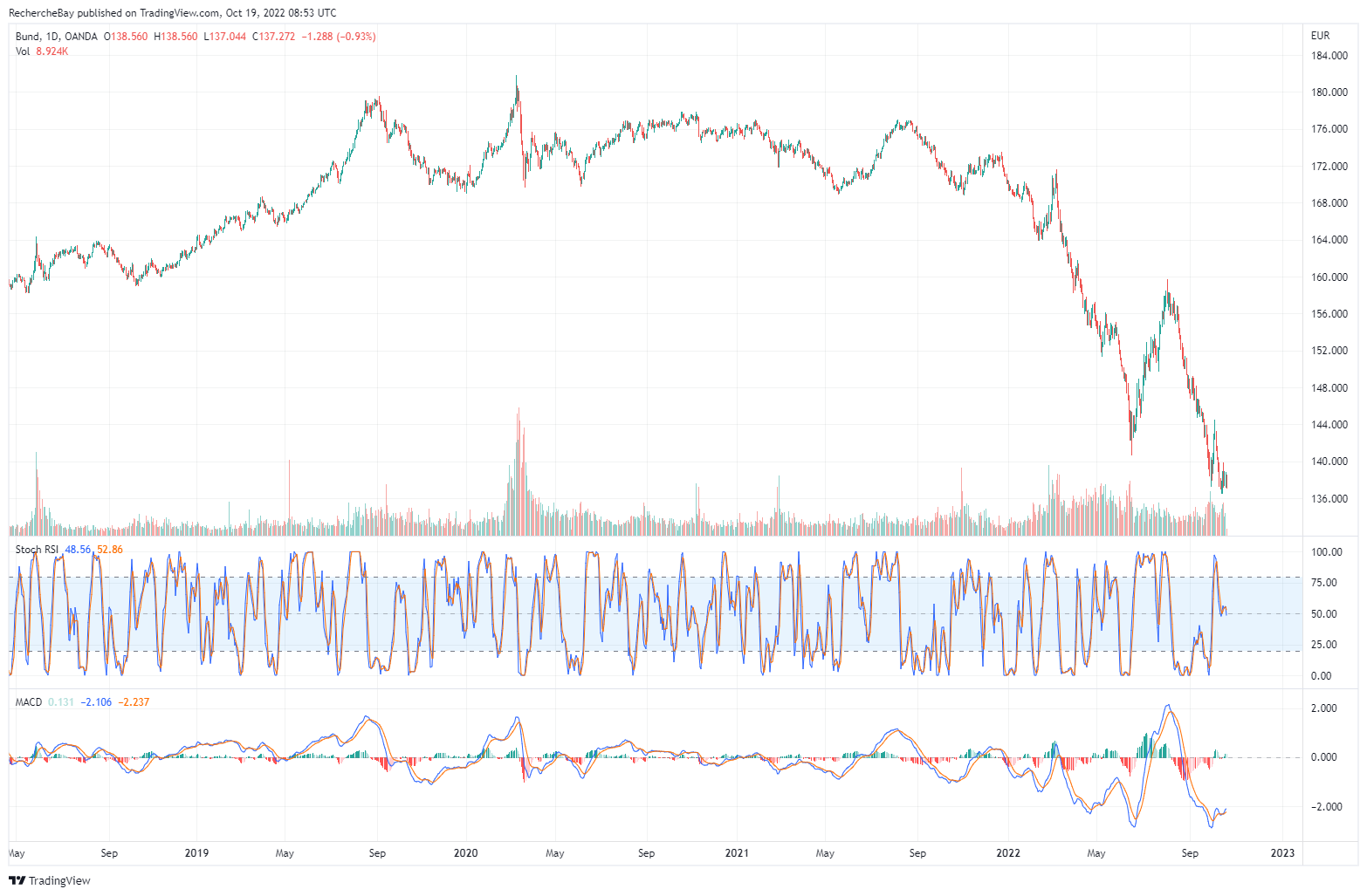 This is another blow to German savers, who will see the real value of their assets held mainly in euro-denominated debt securities plummet this year.

If we add up the effects of inflation, the fall of the euro and the fall of the Bund, it is likely that savers will look grimly at the performance of the funds in which they have invested most of their savings.

Inflation continues to rise in Europe. The PPI paid by producers reached a staggering +46% year-on-year in Germany in August: 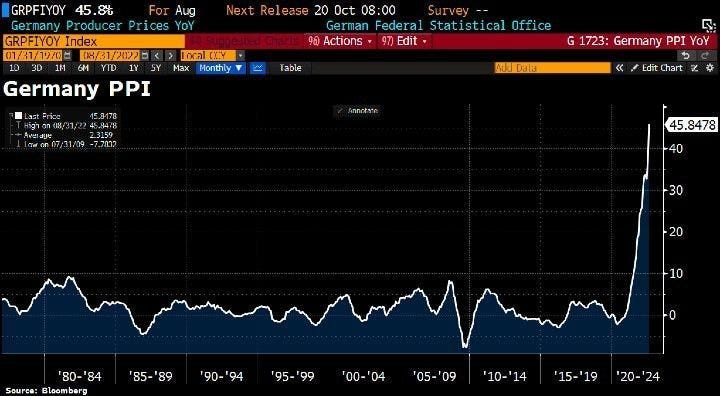 The CPI index is likely to rise again in Germany. This out-of-control inflation is weighing on business expectations. In recent weeks, the IFO index has suffered an even greater historical decline than in 2008. The last time such a decline occurred, the country entered a deep recession: 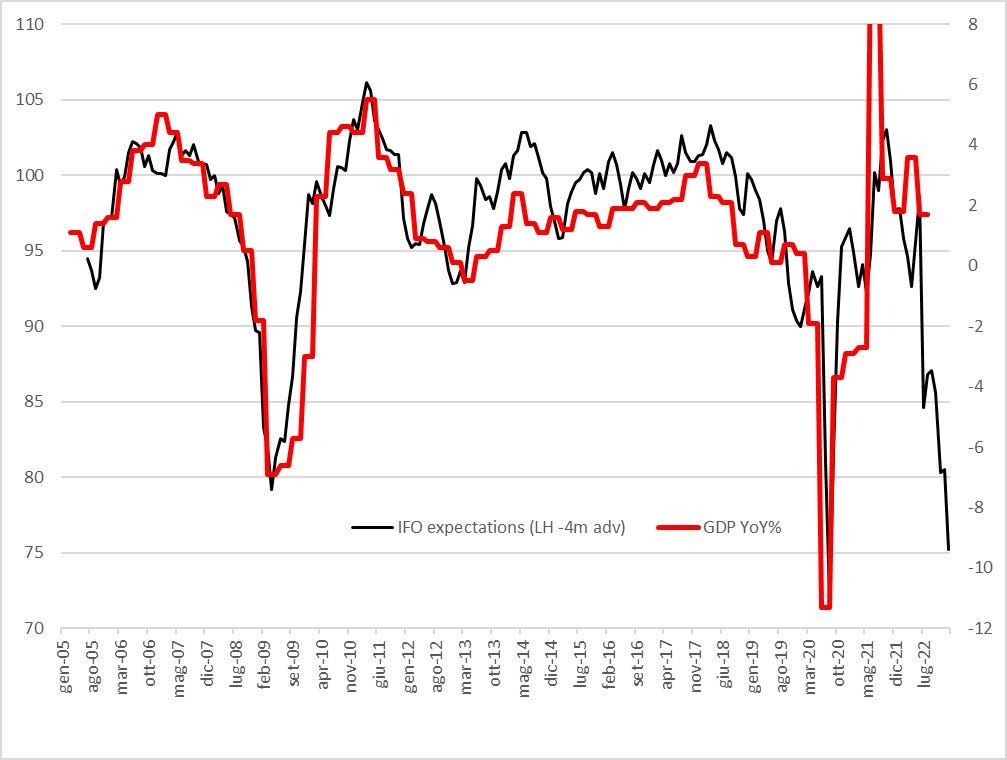 The CPI index in the UK is also rising sharply. And with the BoE abandoning its monetary tightening policy, this train will be much harder to stop. 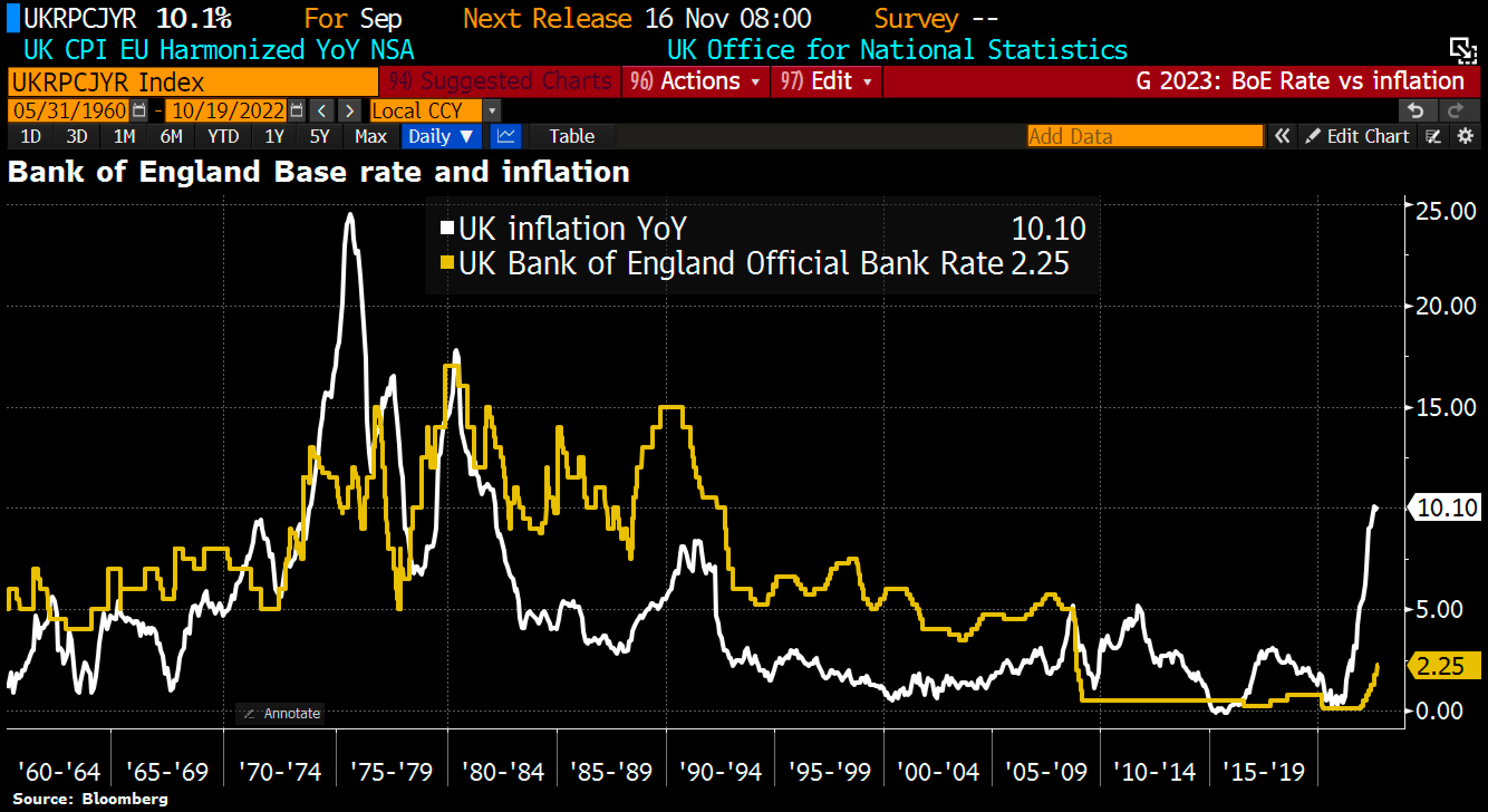 At a time when European industry is being hit hard by this inflationary shock, it is important to remember the incredible inability of the monetary authorities to anticipate it. Barely ten months ago, Christine Lagarde predicted that inflation would only be a "passing hump". The business leaders who listened to her and did not anticipate the shock must now face the emergency. 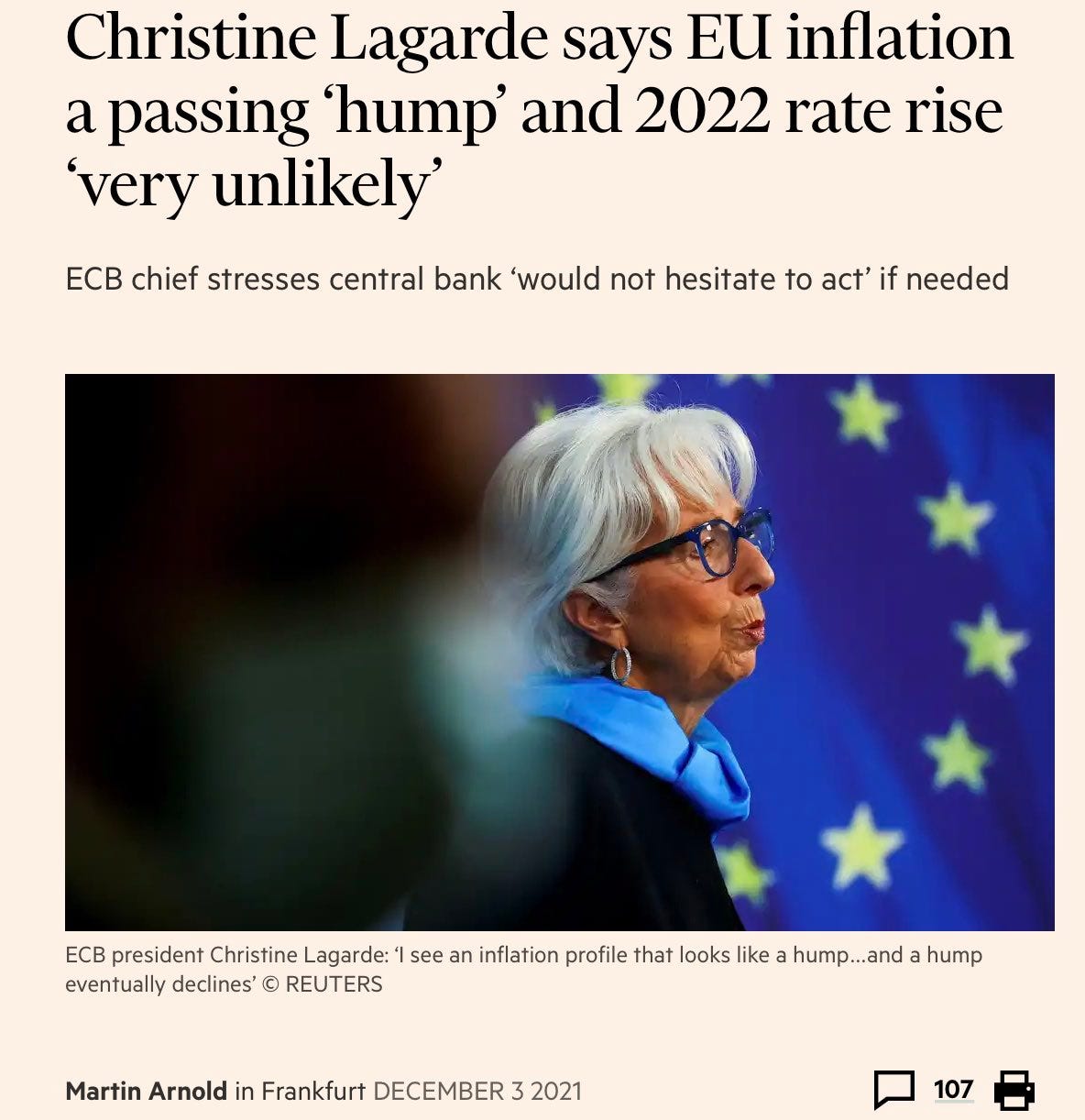 The credibility of central banks is increasingly questioned.

Mohamed A. El-Erian, who heads the prestigious Queen's College at the University of Cambridge, questions the credibility of the Fed in a tweet that has gone viral: how can we not hold to account an institution that has been wrong on the four pillars of its monetary policy mission, namely its analysis, its forecasts, its implemented actions and its communication?

An independent #FederalReserve is critical to the well-being of the US #economy. Having said that, it is getting harder to justify such independence when four big operational errors (of analysis, forecasts, actions and communication) are accompanied by a lack of accountability.

Inflation is at the root of social movements all over Europe, but paradoxically, none of these street demands are addressed directly to these institutions. Central banks are largely responsible for the current social unrest, yet they are not being singled out by those who are triggering the uprisings. The complexity and obscurity of financial markets make them less accountable, and this is one of the main advantages of modern financial engineering.

This week, the crisis has suddenly spread to Japan: despite announcements of intervention by the BoJ, the yen continues to be sold on the markets, which are now testing the central bank's credibility head-on. 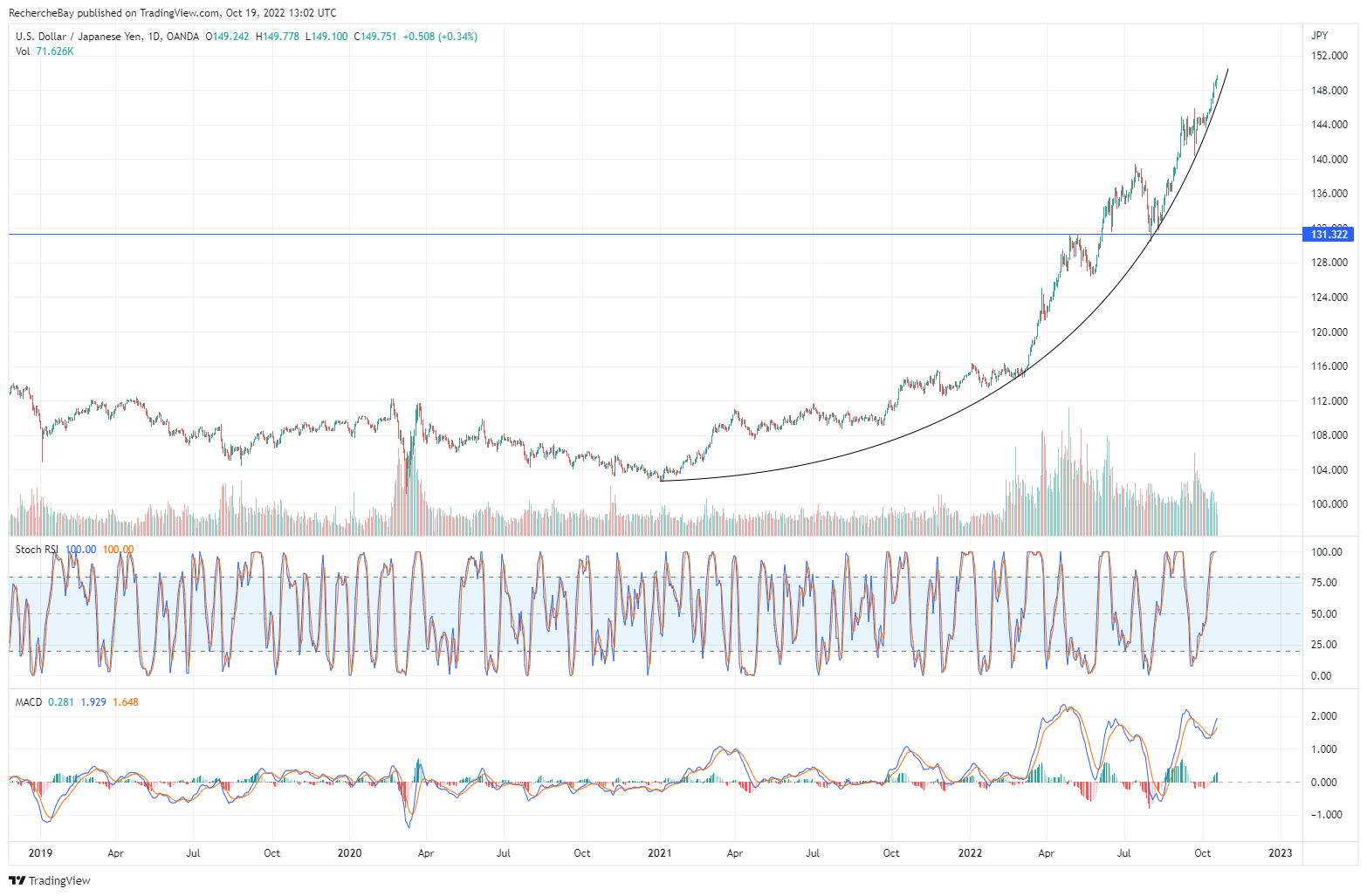 As I have often written in my articles, the fact that the crisis of confidence is ultimately moving to Japan makes perfect sense. The BoJ was the first to apply the policy of buying back government bonds. The alchemy of quantitative easing has been most intense in Japan: the BoJ has nationalized the bond market and today, with a record debt-to-GDP ratio of 250%, the price of this monetary folly is being reflected in the value of the yen. The market is starting to blow the whistle on the endgame. The dollar continues its exponential rise against the yen. At this point, an accelerated fall in the yen would have a devastating inflationary effect. To stop the bleeding and avoid the country running this risk, the BoJ has to intervene in the foreign exchange markets and buy yen with its dollar reserves, including selling its treasury bills. But these interventions could make a securities market that is already in danger of going completely off the rails even more illiquid. There is no simple solution to stabilize the yen!

Gold in yen is drawing a second bullish flag with a reversal underway on the MACD indicator: 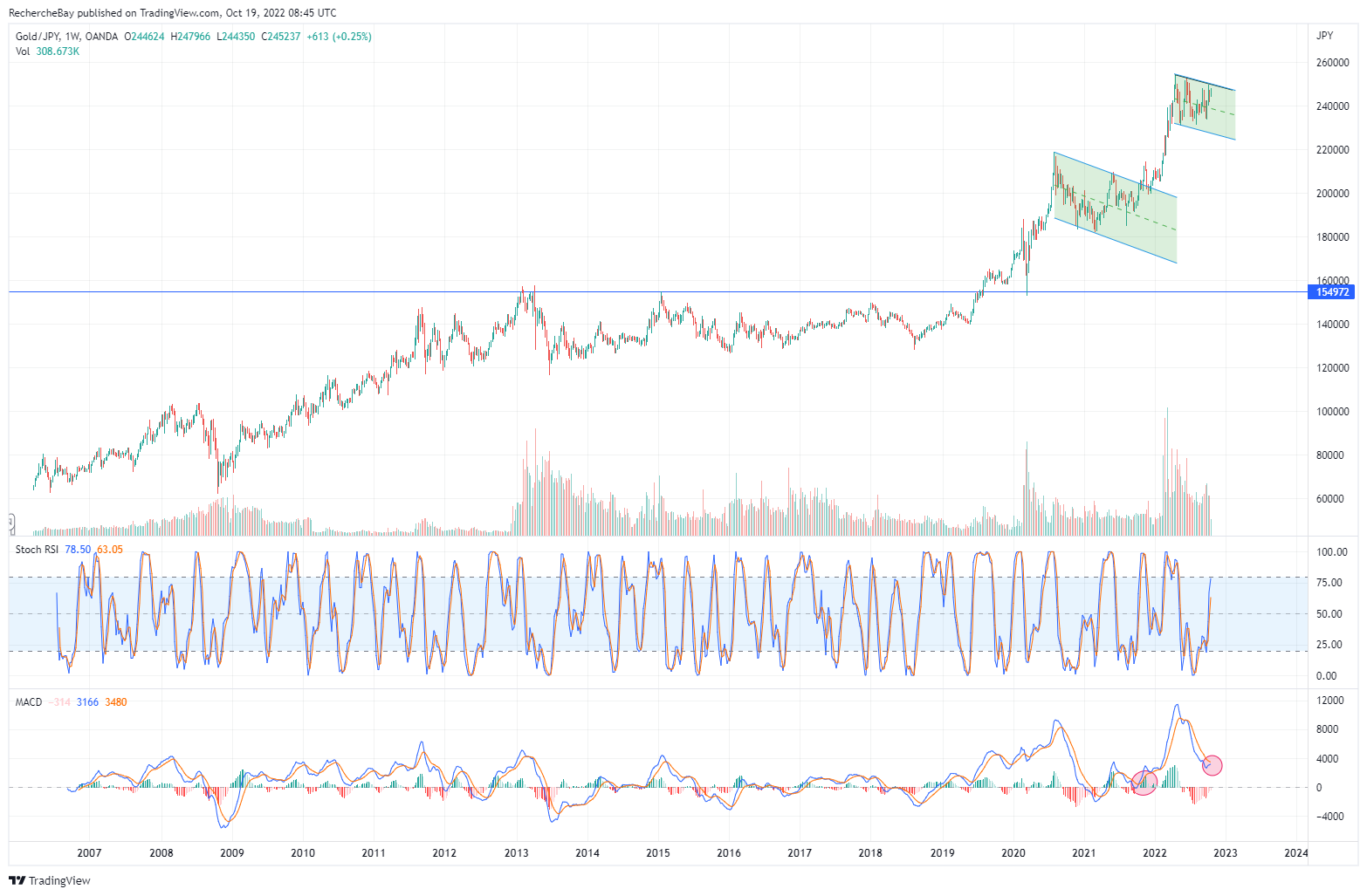 A new breakout of this bullish pattern would send a significant signal to the currency market. For the BoJ, this is the type of message to be avoided at all costs to defend the credibility of the yen. It does not have much ammunition left to prevent an irreversible loss of confidence in the value of its currency. Moreover, the central bank has already announced that it will intervene in the market again. It will certainly not be the only one to do so to avoid contagion.

As these interventions continue to increase, the volatility in all markets is not going to go away!

Under these conditions, how can we be surprised to see more and more investors seeking the stability of an investment in physical gold in order to regain some serenity in a financial world where central banks have not succeeded in establishing the stability necessary for the proper functioning of the markets?