This week, double-digit price rises have been continuing at breakneck speed.

The price of used vehicles is rising again, as well. Today, people are having to spend twice as much as last year for the same type of product... 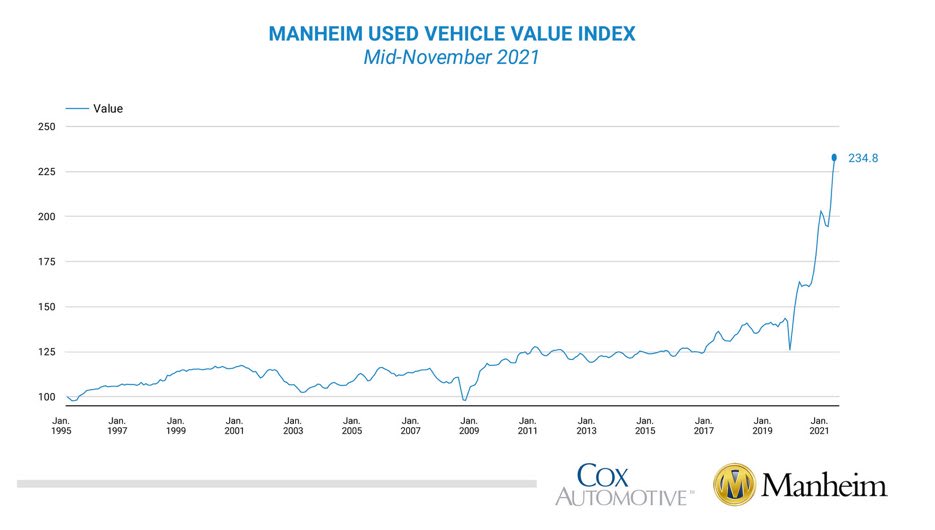 Meanwhile, the situation at California’s ports is constantly worsening. The waiting times for unloading commercial container ships are getting longer and longer:

U.S. demand remains strong, not least thanks to a recovery in consumer credit. The activity index published by the Federal Reserve of Chicago registers a significant recovery in October: 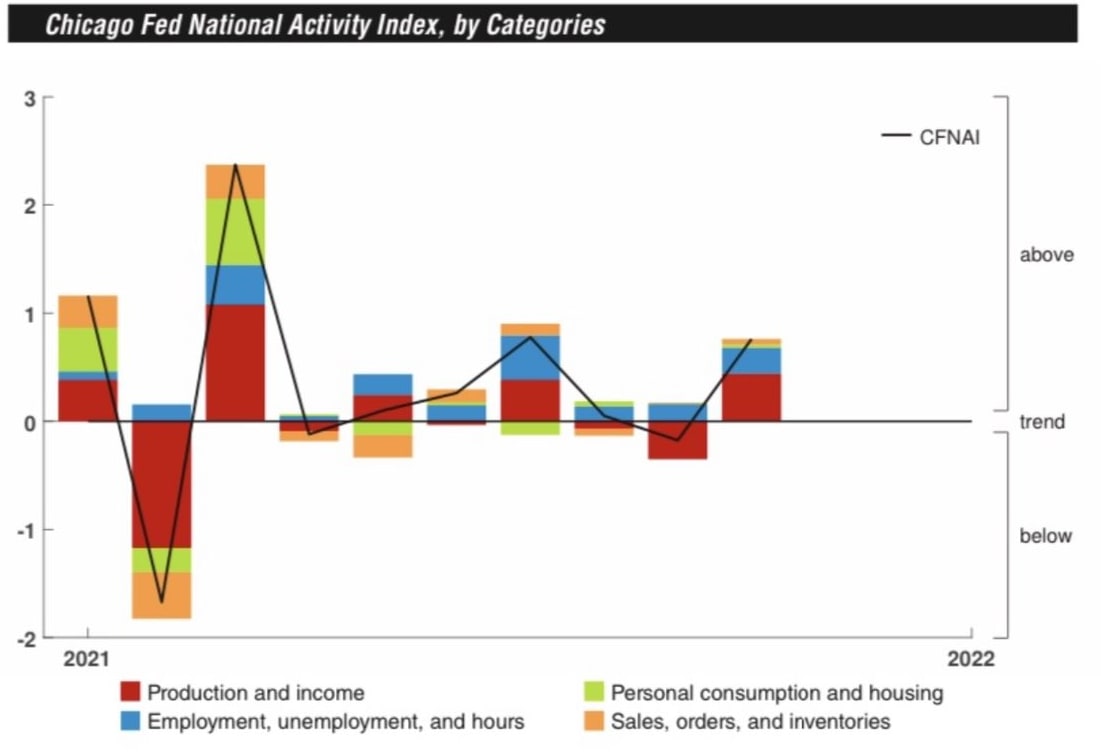 This sustained situation of blockage in the production chain, coupled with a notable resumption in activity, is only serving to maintain the rise in prices.

And what’s more, this inflation is being felt far more strongly than the official statistics would suggest.

The Zillow rent prices index is generally 6 months ahead of the official U.S. CPI. 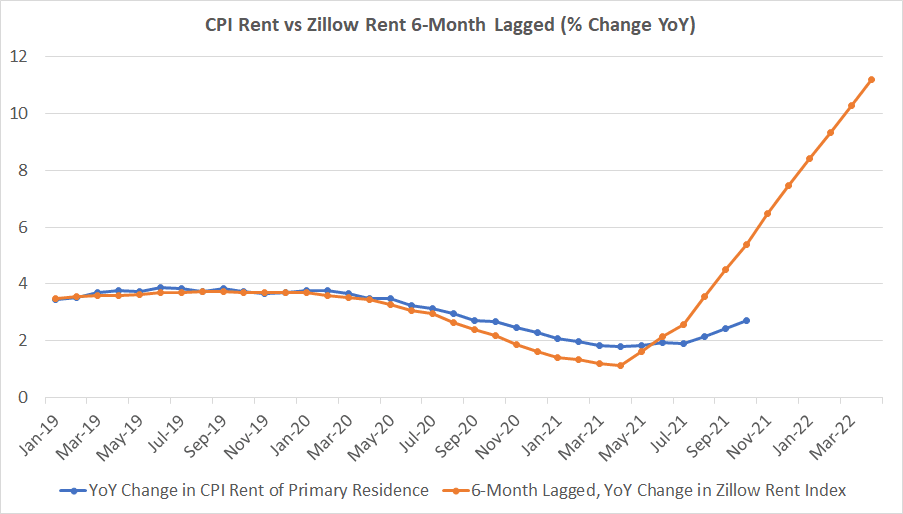 On this latest chart, one can clearly see that the taking off of rent prices observed last spring prefigures, as was expected, the inflation that the American people are experiencing today. The angle of incline of this rise is far weaker, however, in the ‘official’ figures.

The gap between the rent prices and the CPI index is increasingly at a dizzying pace, resulting in a situation whereby the official figures are having growing difficulty conveying the actual situation on the ground: 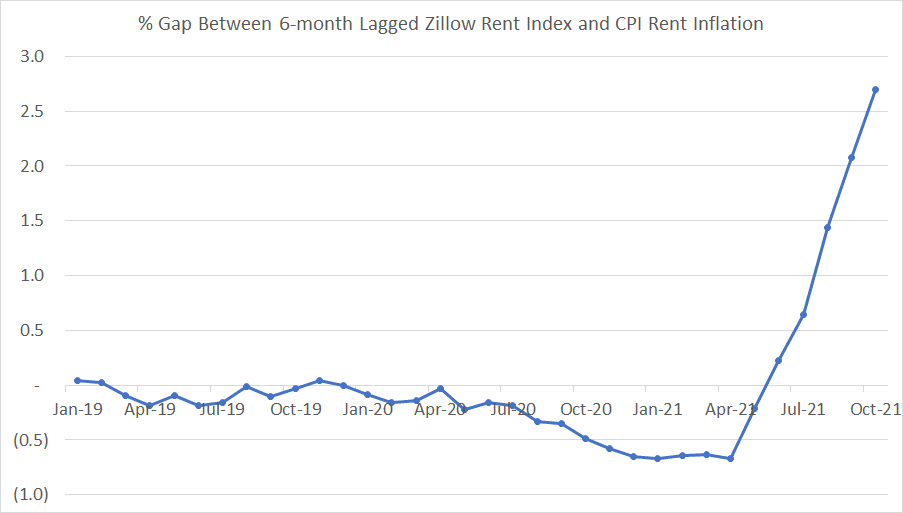 In any case, one can only wish the U.S.’s official statisticians plenty of fortitude in the months to come! Inflation has now set in at a rate that is far too high, on the ground, for it to be possible to mask it.

The question of inflation has suddenly become far more of a central one in the United States, moreover, as the Google search trends on the topic reveal:

At a time when, on the ground, every American is being brutally confronted with the violent shock of inflation, people are realizing once again the extent to which this phenomenon was very poorly anticipated by most economists: a reminder of this can be seen in this article in the journal The Economist:

The sharp increase in inflation over the past year has blindsided many economists. Almost no one saw it coming https://t.co/ggikkcZUvW pic.twitter.com/P66isbuTgv

The Fed has increased its balance sheet by 12 trillion dollars in a single year. If we go back to the definition of inflation provided by the INSEE: “Inflation is the loss of purchasing power of the currency that results in a general and sustained increase in prices.” To quadruple the money supply M1 (and double one’s M2) in a year is to take direct action on the loss of buying power of one’s currency, for there is more money in circulation for the same finite number of goods. With this simple observation, was the inflation really so difficult to foresee?

Let’s take a look at what’s happening in Turkey at the moment:

Turkey has quadrupled its money supply M2 (twice as quickly as in the United States). Turkey is thus in the process of living through inflation that is even higher than in the United States (it’s twice as big...logically!). The speed at which its currency is collapsing now poses a risk of hyperinflation (inflation that is out of control, with a loss of confidence in the currency). The Turkish scenario is not (yet) being envisaged either in Europe, or in the United States, because the confidence in the currencies issued by our central banks is (for the time being) still there.

To claim that there is no link whatsoever between the inflation and these expansionist monetary policies, however, is absolute nonsense. As The New Economist emphasizes, very few economists anticipated this cause-and-effect connection. This raises questions about the role of economists, who are supposed to steer the central banks’ interventions.

In the mining industry, bosses would have no hesitation about firing an engineer who has failed to anticipate a risk of collapse in a exploitation site. More generally, an engineering studies bureau would be fired from a project if its work jeopardized the on-time delivery of the project due to an error in the calculations.

An economist can get his forecasts wrong, and yet that will not prevent him from keeping his job with the central banks, with a salary, moreover, that is far higher than in other sectors of industry. It is in this same spirit that the chairman of the U.S. Federal Reserve, Jerome Powell, who shares with his predecessors the immediate responsibility for this waking up of inflation, has been given 4 more years in office by the Biden administration.

Yet these poorly anticipated crises are increasingly costing us dear, in terms of the very functioning of our economies, and with each passing day they are having a little bit more of an impact on the confidence we have in the people who print the money we use in our transactions.

And the higher the inflation rises, the more this confidence in the currencies is eroded.

This is even more true in Germany, where the producer price index is literally soaring to +18.8% in the annual variation (2 points higher than the highest estimates): 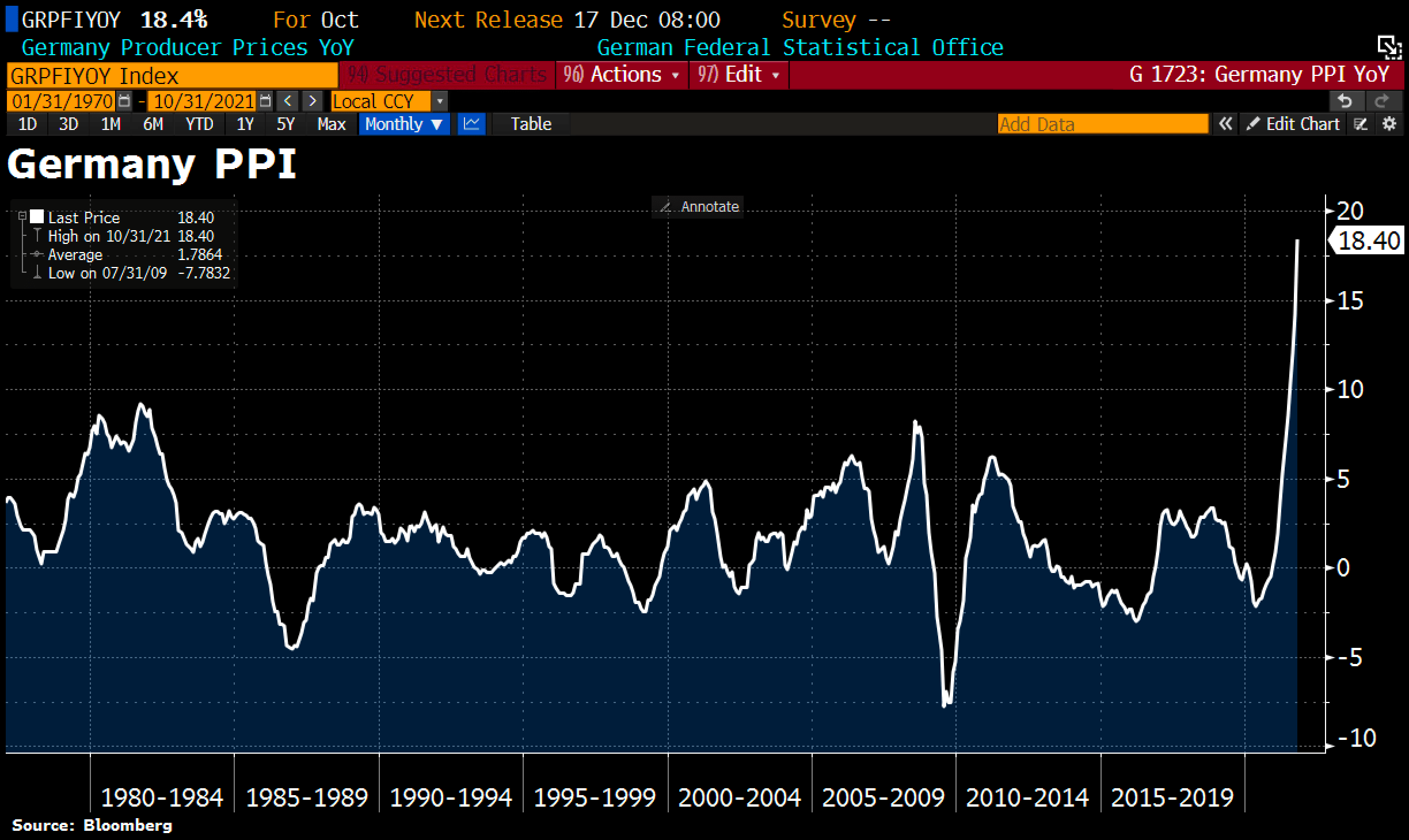 The ‘tools’ used by the authorities to combat this inflation have not, so far, been very effective.

The Biden administration’s decision to put part of its strategic petroleum reserves back on the market has not had a calming effect on the rise in the price per barrel. When the figure of 50 million barrels was announced, the price of gasoline started rising again: 50 million is the number of barrels that is equivalent to three days’ consumption in the United States! If bluffing techniques like these are the only tools for combating the rise in the price of gasoline, there is unfortunately a risk that the price of a barrel will once again be at three figures before long.

The interventions on the futures markets were very quick to show their limitations, as well. A relaxation has been observed on the copper futures price, solely because the COMEX has altered the rules of the game and changed the delivery methods of contracts for those betting long. The tension on the physical stocks was therefore shifted onto other markets, notably in China, and copper resumed its rise, quite simply because there is increasing demand faced with a diminishing stock.

This resumption in price rises is affecting increasing numbers of commodities.

Magnesium is up 22% this week, carbon credits are up by more than 10%, and construction lumber is rising again (+35%), heading towards the highs it reached in October.

Last week, an article by Bloomberg took another look at the very tense situation regarding metals. The futures markets are all in a phase of backwardation; the sellers can no longer contain the soaring price rises for most essential metals, such as zinc, aluminum, nickel, copper...

The market is starting to realize that these ‘tools’ that the futures markets are putting forward to ‘calm’ the violent rise in the prices of commodities are perhaps not as effective as had been hoped.

Those who are interested in the precious metals market are very well aware of how these price control tools work. They were also able to observe this type of intervention in the negotiating of the gold contract for the month of December, just before the options expirations. In a few hours, the equivalent of several months of global gold production was sold, to avoid a situation whereby the call options at over $1800 would be ‘in the money’.

These manipulations of the gold prices are now well-documented thanks to the numerous legal cases that have all ended in convictions for the banks concerned. The latest case involving a trader at JP Morgan reveals quite a number of details about the modus operandi for manipulations like this: 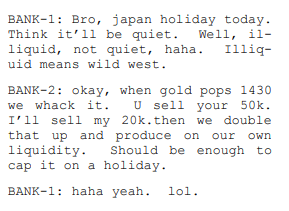 The fines for these market abuses are very low by comparison with the profits made by the banks. Everything is happening in a way that suggests we would rather let the banks get rich off the backs of the investors and producers, because, ultimately, we are very happy to have this futures tool for controlling the prices.

These tools for controlling the futures markets are not new; they have in fact existed ever since these markets were put in place.

What is new, on the other hand, is the fact that no-one in this sector is getting duped any more. Neither on the investors’ side. Nor on the producers’ side. Something that might still have been seen as nothing more than a ‘conspiracy theory’ a few years ago is no longer viewed as such, thanks to the publication of the legal rulings against the banks charged with criminal activity.

These interventions on the futures markets now only have very transitory effects, and at the same time, they are reinforcing the tensions on the physical side. Each enforced correction on the paper market prompts a veritable run on the physical metal. This holds true for the entire metals compartment (whether precious or otherwise), with all the metals finding themselves in backwardation with each new raid.

Something that could still have been used, just a few years ago, to control sentiment on the metals is, today, in contrast, reinforcing the need to stand out from these paper markets and take advantage of these raids to rid oneself of the physical metal a long way from the COMEX...at the COMEX price! And the more frequently these raids take place, the closer we get to the date on which the metal stocks run completely dry.

Some producers have grasped this and are now opting to hold back part of their production, anticipating the upcoming rise in prices. And this is creating even more tension on the stocks available. This is particularly true of silver: after Endeavour Silver, it is now the turn of First Majestic to have taken the decision to keep more than $1.4 million ounces, produced in the last six months, in its vaults.

Without an available stock, the very functioning of the futures markets is in peril. This is what the continuous backwardation of contracts is stipulating: what is the raison d’être of a futures market if the actors in this market always prefer to pay more in order to be delivered straight away?