After looking at the impact of rising rates on the U.S. housing market, this week we turn to a much bigger problem facing the Fed, one that we are likely to see repeatedly in the coming weeks.

In fact, with the violent rise in interest rates now underway, debt service may simply become unsustainable for the US government.

Data from the St. Louis Fed for the second quarter of 2022 already shows the record weight of debt repayment in the U.S. budget. $600 billion is already a record, but that amount is likely to explode this quarter. The budget devoted to debt repayment may exceed the defense budget, which would be a first... 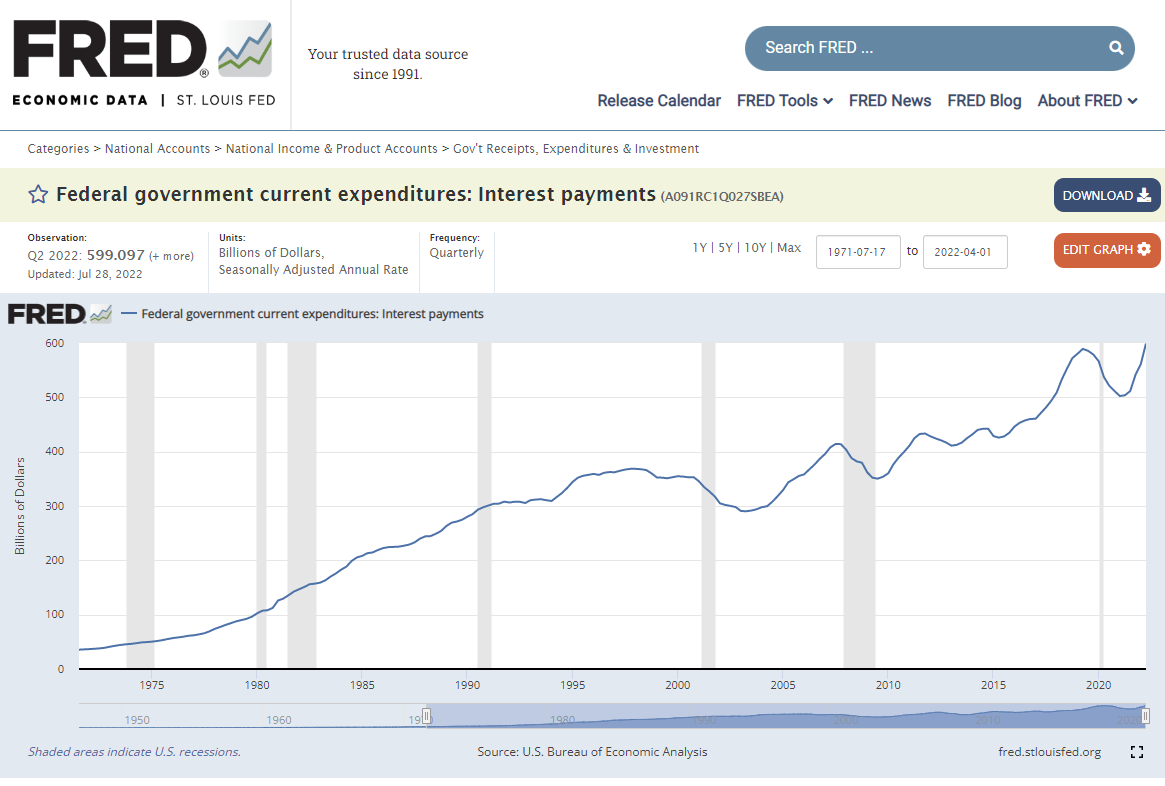 Let's look in detail at the 2020 budget as it was designed before rising interest rates inflated the debt repayment portion: 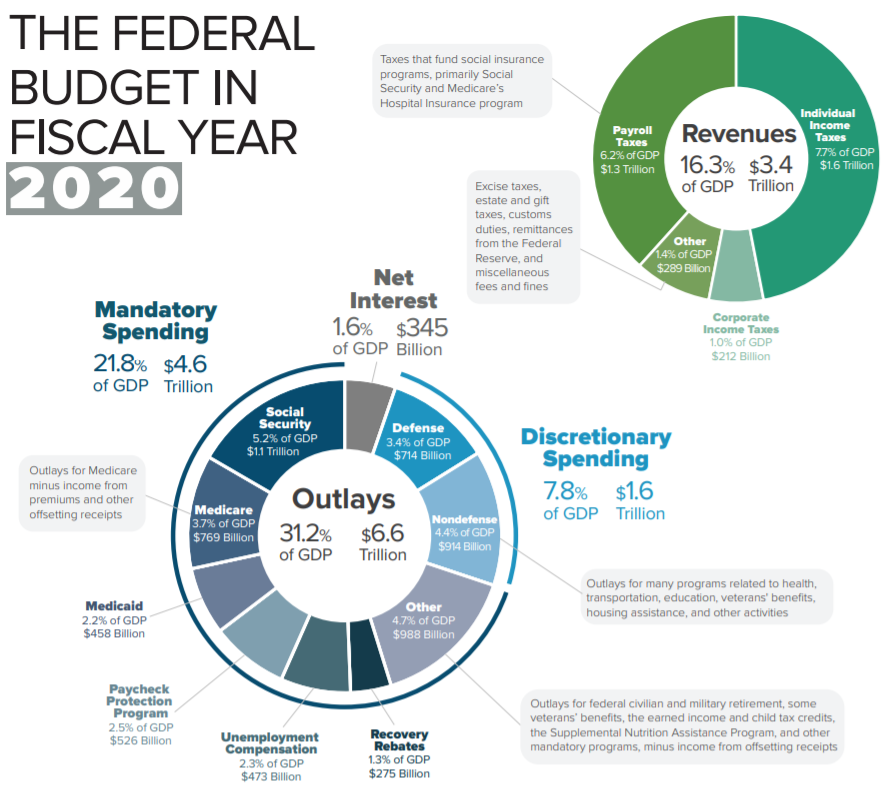 On the expenditure side, only $345 billion had been planned. The amount has already doubled and the impact of the latest explosion in interest rates has not yet been taken into account.

The American government is therefore in a situation where its revenues are not sufficient to pay for its expenses. This is not new, the country is "rolling" a deficit year after year by issuing more and more new debt to cover this deficit. Debt issued by a company in such a debt spiral (forced to borrow more and more to cover its year-to-year repayments) would probably be rated much lower than the US government is.

Until now, this recurring debt problem had not worried the bond markets too much. U.S. Treasuries were considered to be the most reliable and safest instruments. In fact, they are often used as collateral in a financial package.

This year, 2022, marks a very clear change. US Treasuries are no longer the safe haven they were during the last major crises, such as in 2008 when the stock market fell. This year, the opposite is true: the bond market's collapse is dragging the stock market down with it. The decline of the US 20-year is unprecedented since the post-war period: 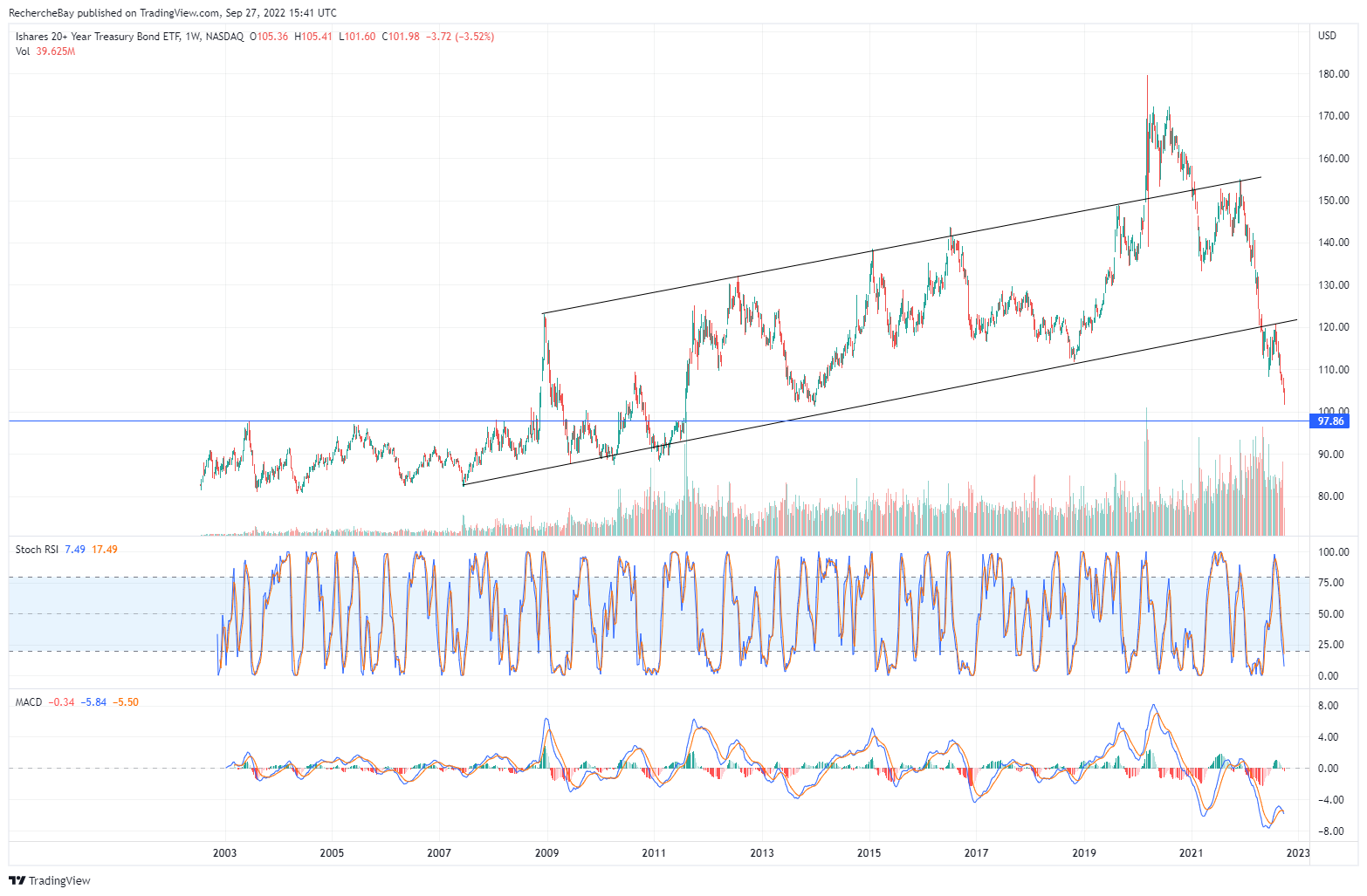 For the first time, there is doubt about the ability of the US government to continue to increase its deficit by issuing new debt.

This sudden loss of confidence in fiscal policies is also affecting Great Britain. The market is punishing the new Prime Minister's latest fiscal plan, which raise questions about the UK's ability to balance its budget in the very short term. In the last few days, we have seen a real crash in the British 10-year. In a few days, the market has erased twenty years of gains on a sector considered safe and not very speculative! 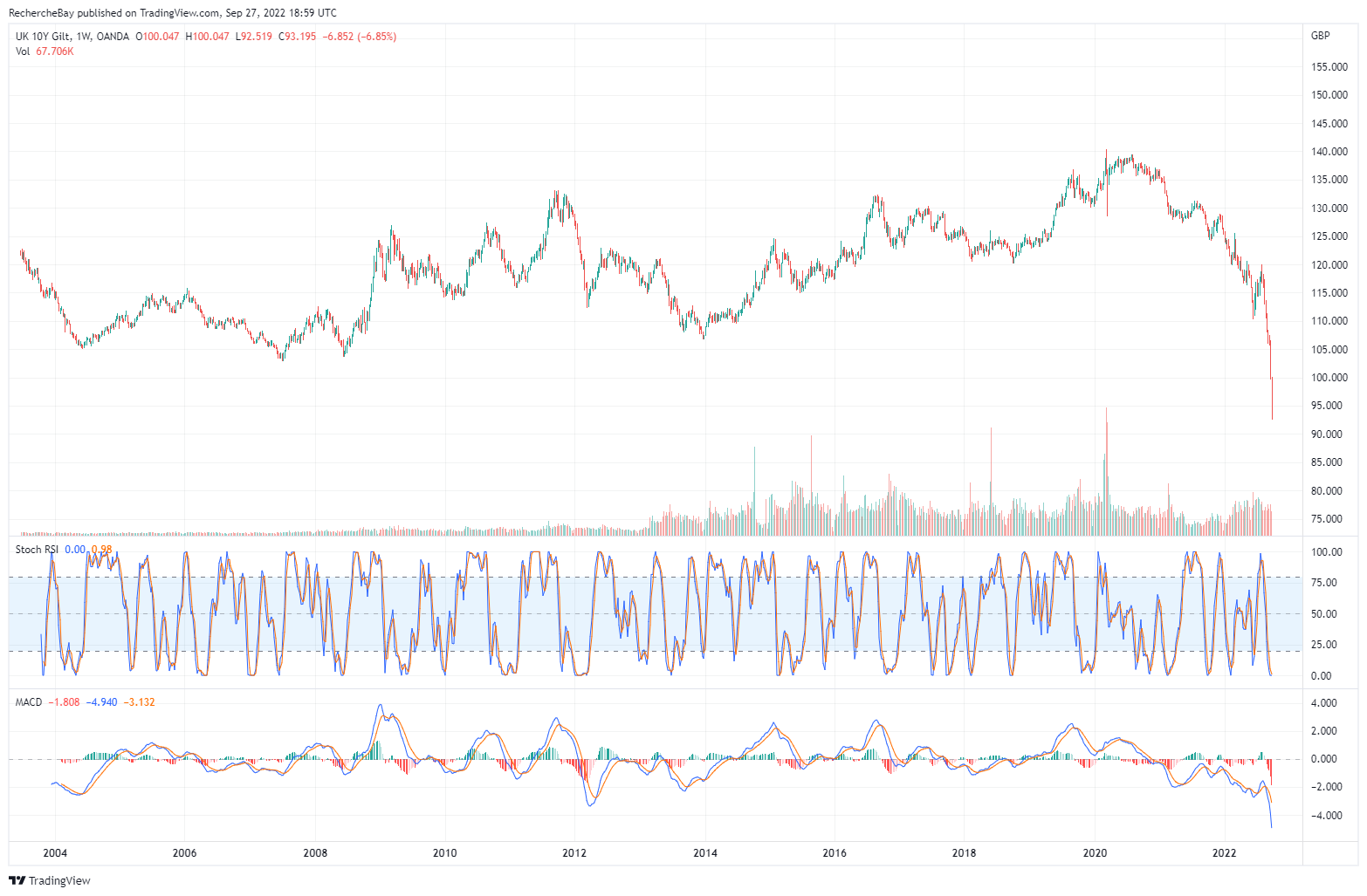 This British crash prompted the Bank of England on Wednesday to urgently announce a new government bond purchase program to try to calm the fall of the British bond market. The monetization of the United Kingdom's debt, which had been briefly interrupted, will resume in earnest. It didn't take long for the first central bank to face a problem financing its country's debt to switch back to a more lax monetary policy. The risk now is that the British currency will bear the brunt of the restarting of the money printing press in the UK.

The collapse of the sovereign debt market is the most important event of the last few days. This market is experiencing even larger sell-offs than the speculative debt market. In previous corrections, the junk debt market collapsed and government bonds served as a safe haven. This was the case in 2008, but also in March 2020.

As we can see in the chart below, which compares the US 20-year and the HYG junk debt index, there is a very noticeable difference between March 2020 and the June - September 2022 period. 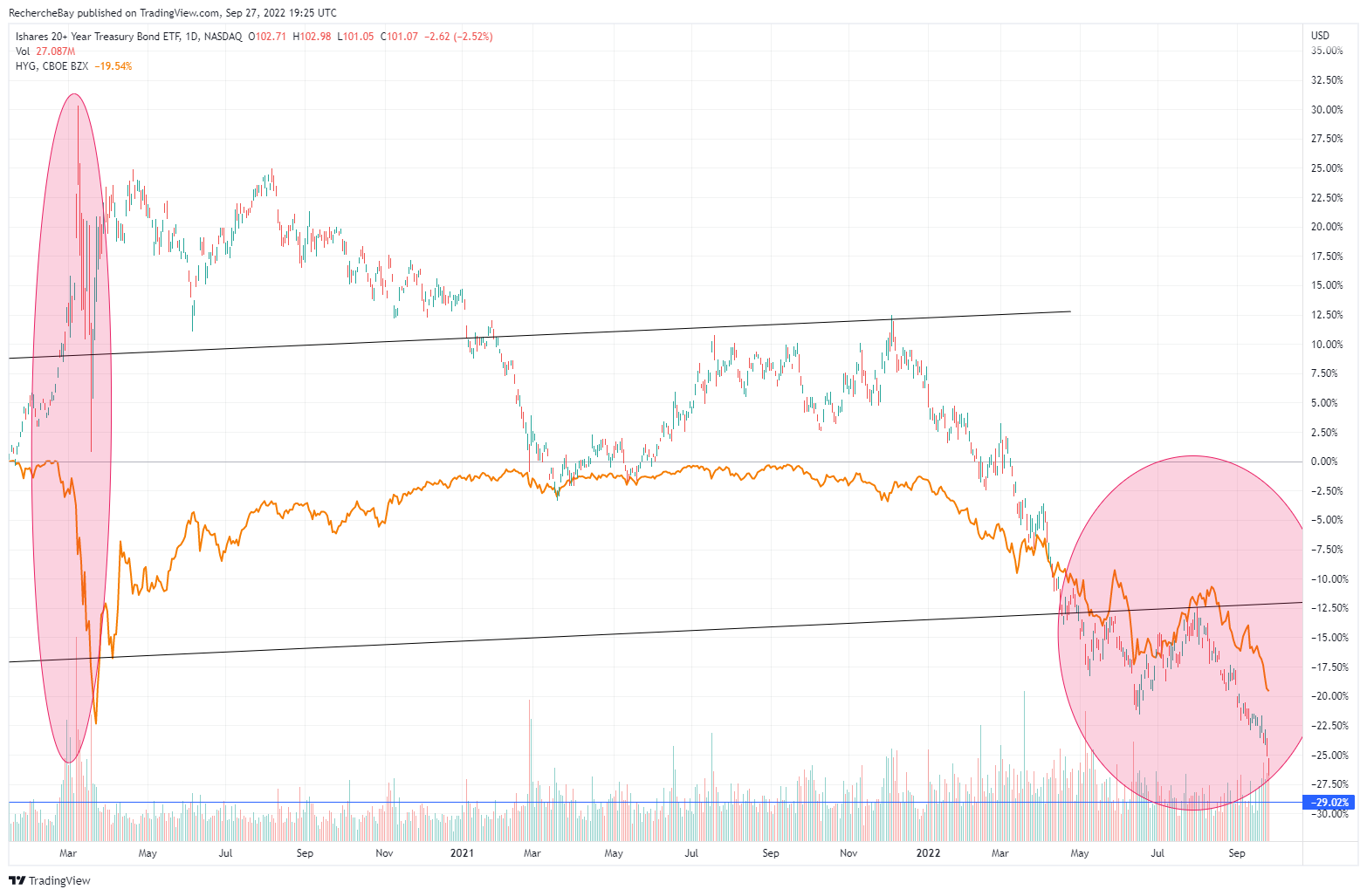 U.S. sovereign bonds are underperforming other bond asset classes. This is a first.

Looking at this movement in a more recent window, we can see the magnitude of the drop in recent weeks: 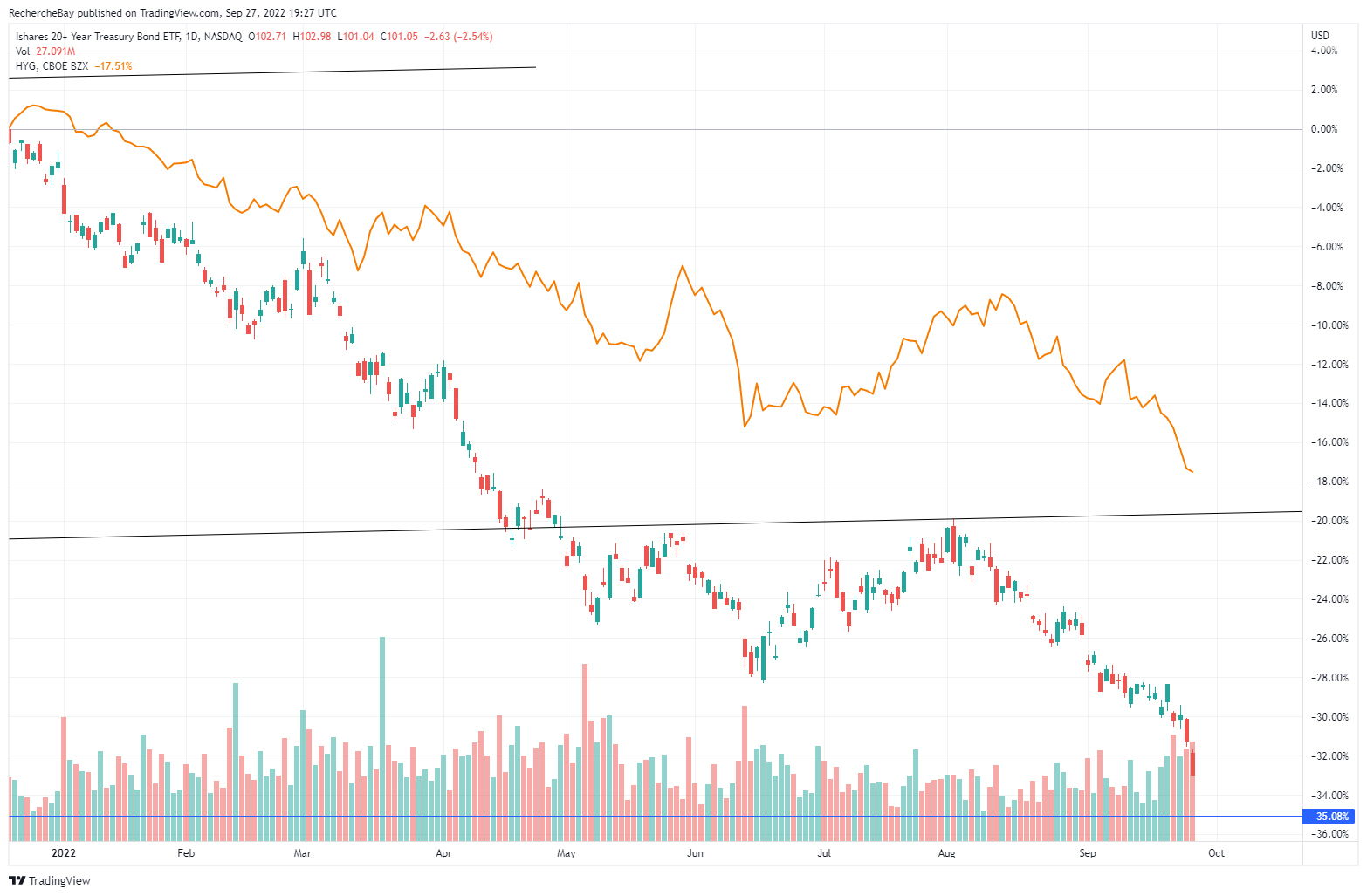 The unprecedented collapse of the government bond market is a threat to all assets. The contagion of this real crash is already observable in the currency markets: the pound sterling is experiencing unprecedented volatility, reminiscent of the behaviour of Asian currencies at the end of 1997.

Gold's continuation at highs in the British pound is likely to propel gold into a new bullish leg in that currency: 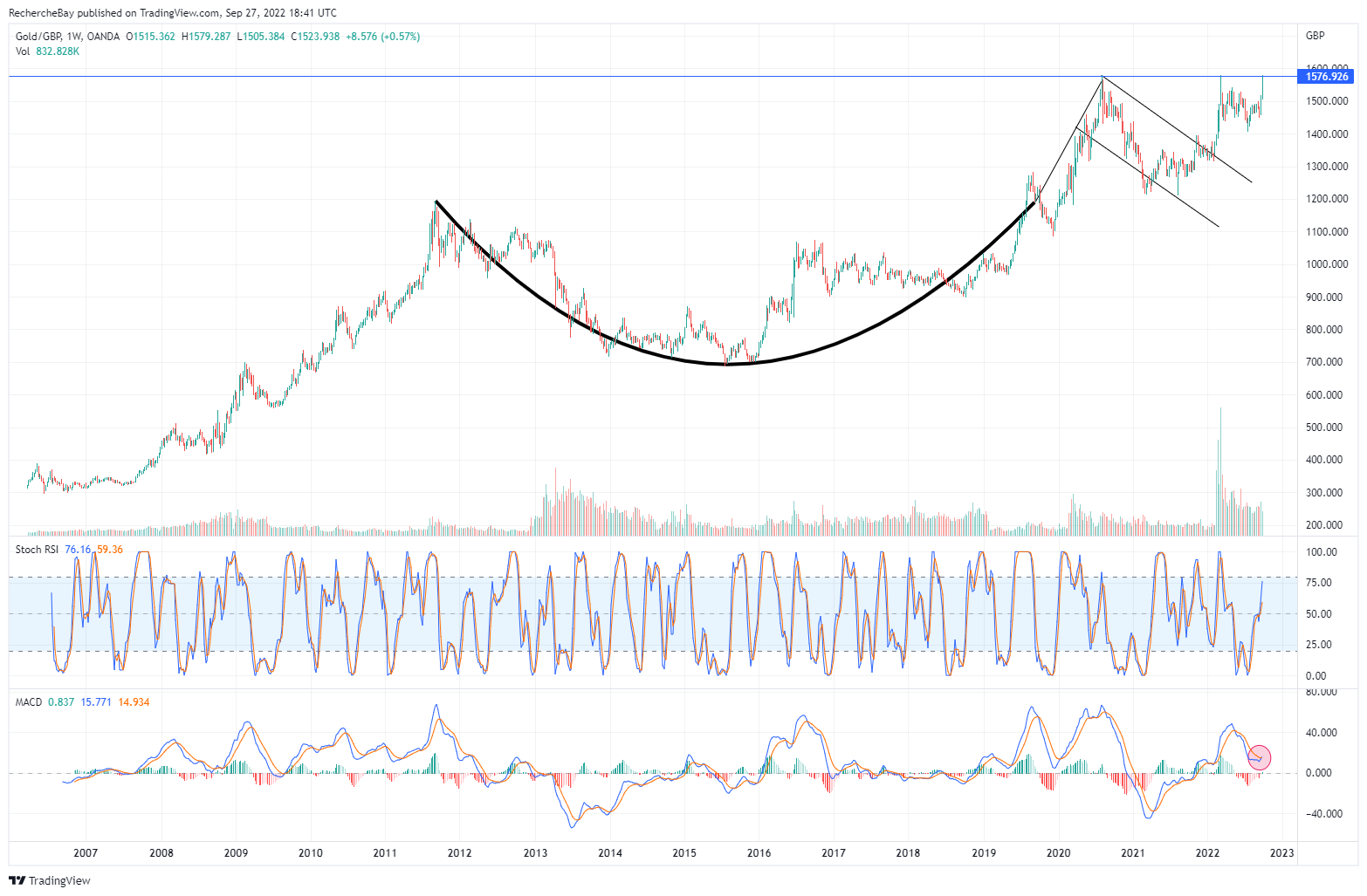 In euros, gold has just tested its ascending support. As long as it remains above €1660, this support remains valid: 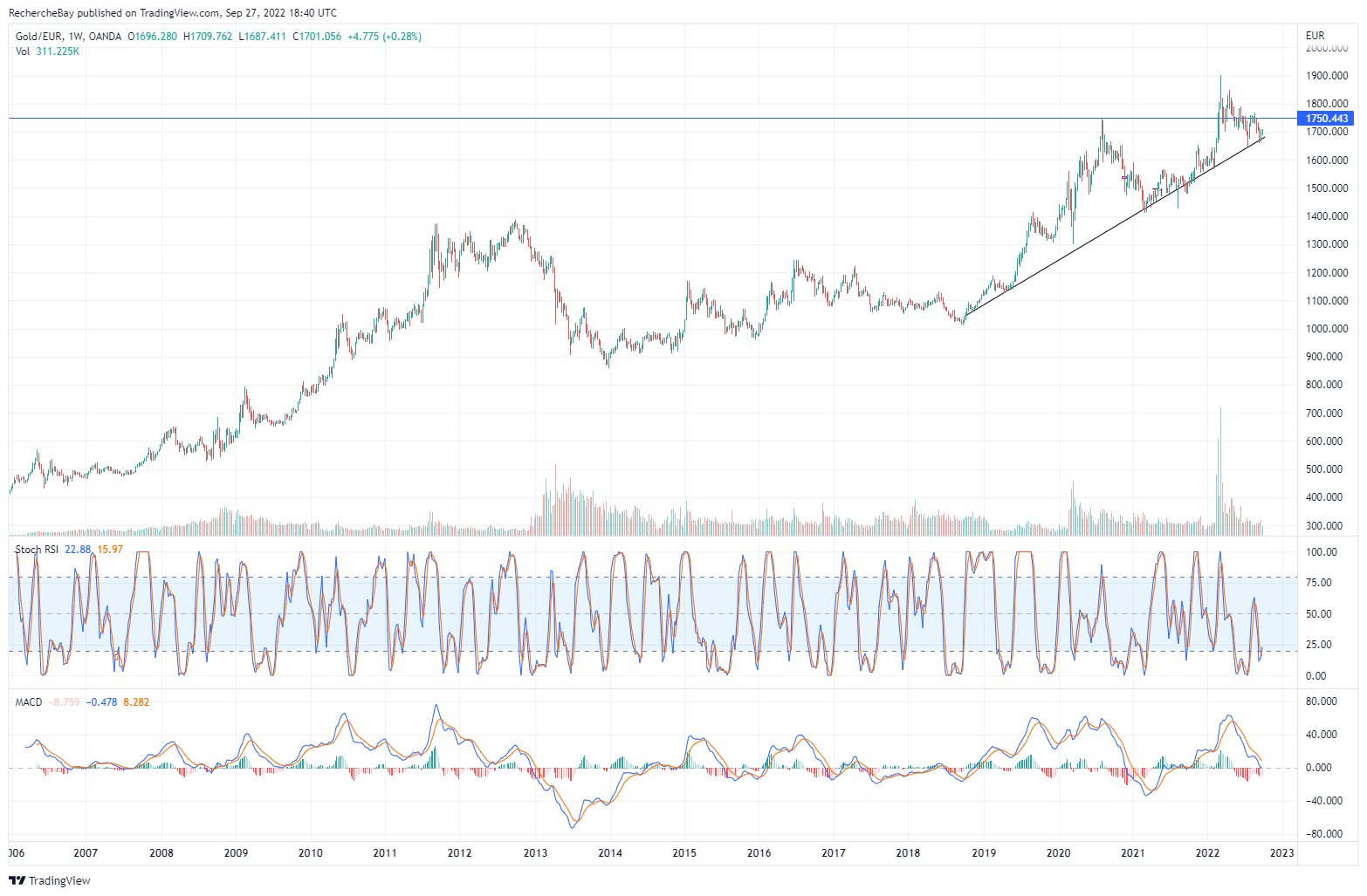 But it is mainly in relation to the equity market that gold is starting to outperform. The strength of the dollar is affecting the SP500 index much more than the gold market. Gold is falling in dollar terms, but not as fast as the equity market. Graphically, the MACD cross of the GOLD/SPX curve indicates that gold will outperform in the very short term: 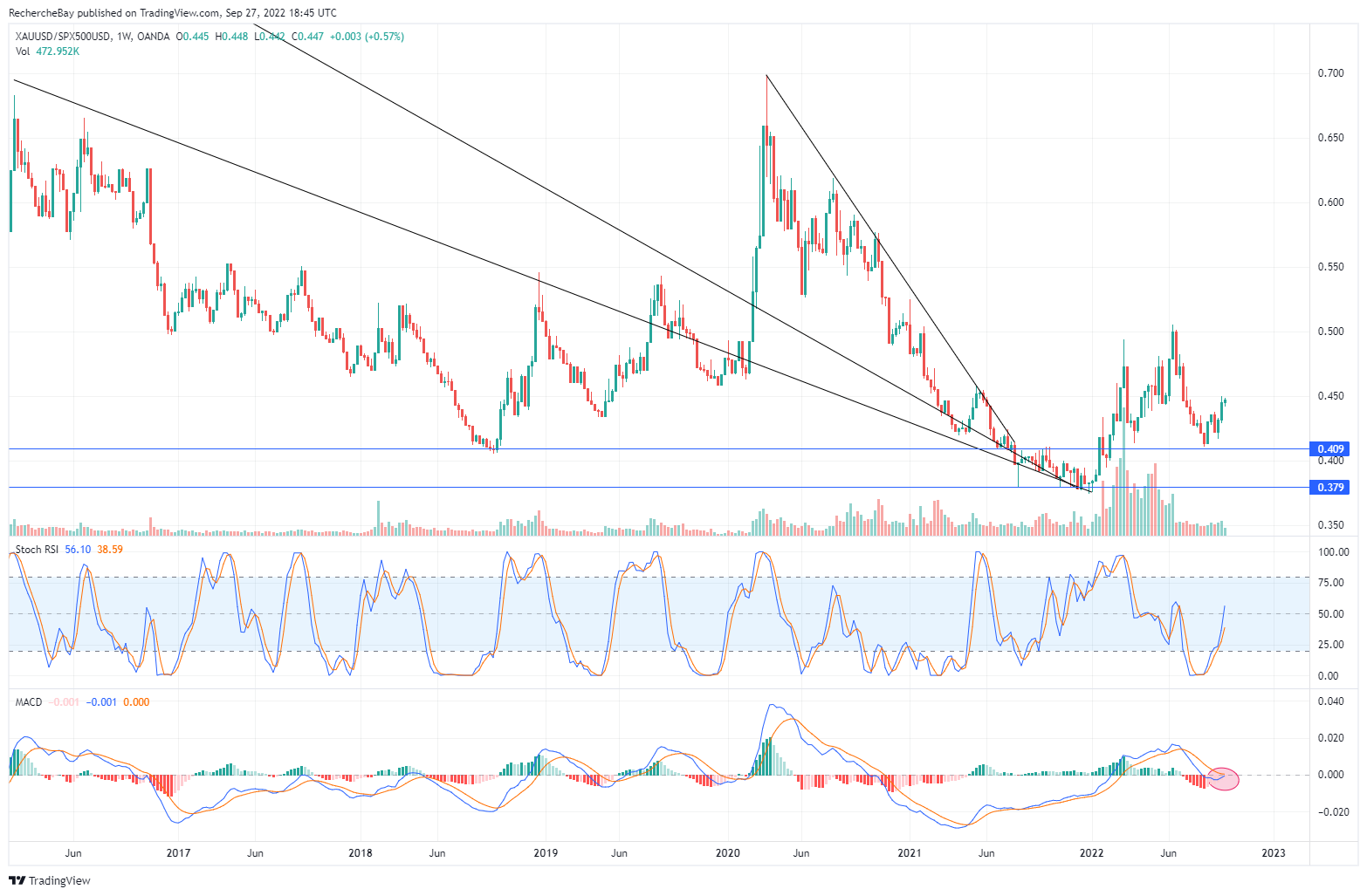 The relative strength of gold prices is all the more remarkable when one considers the surge in the dollar in recent weeks. The DXY index is now following an exponential curve: 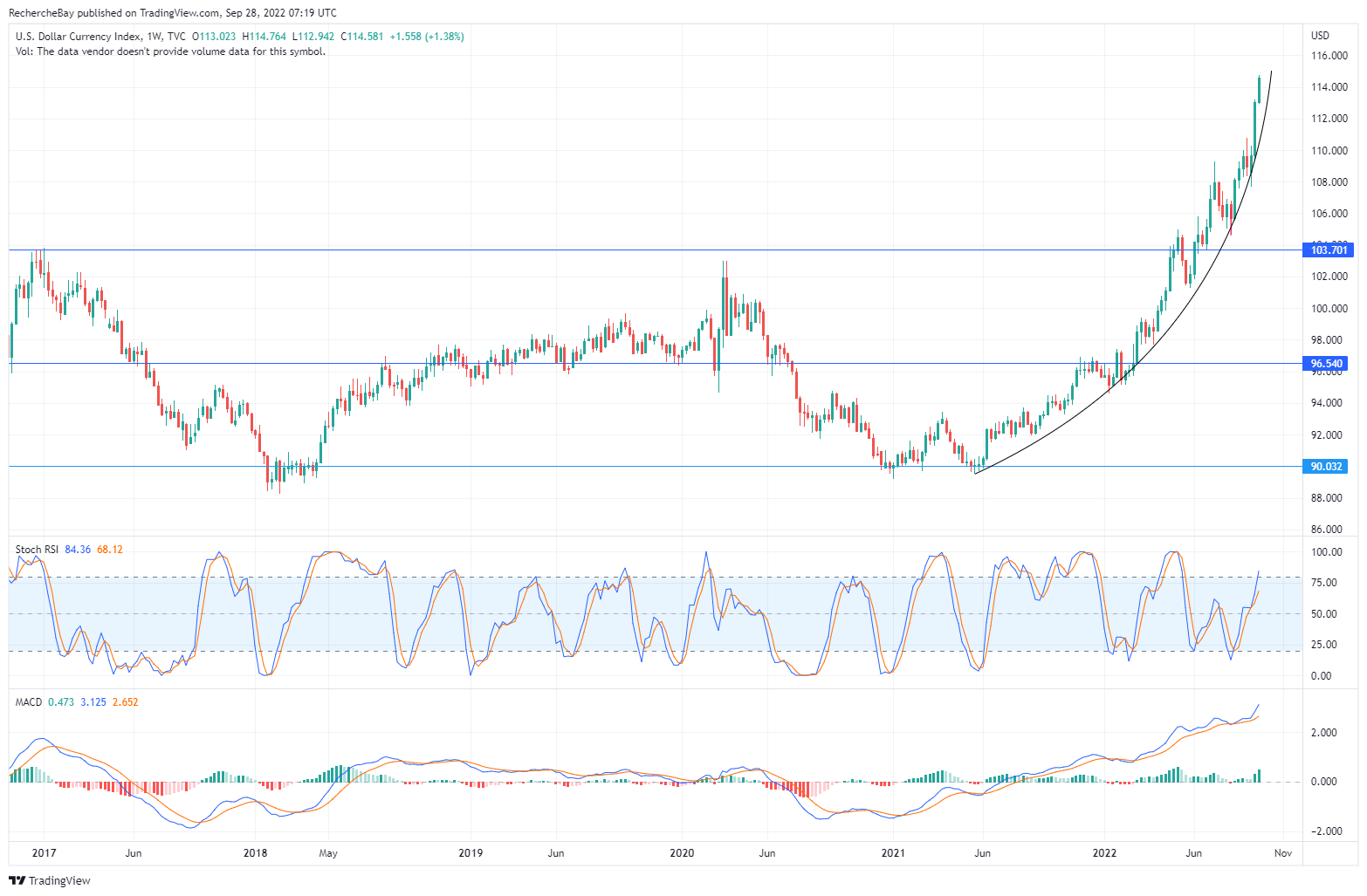 During the previous euro crisis in 2015, the dollar had experienced a remarkable rise of +25%. As a reaction, gold plunged by -25% in a few months. 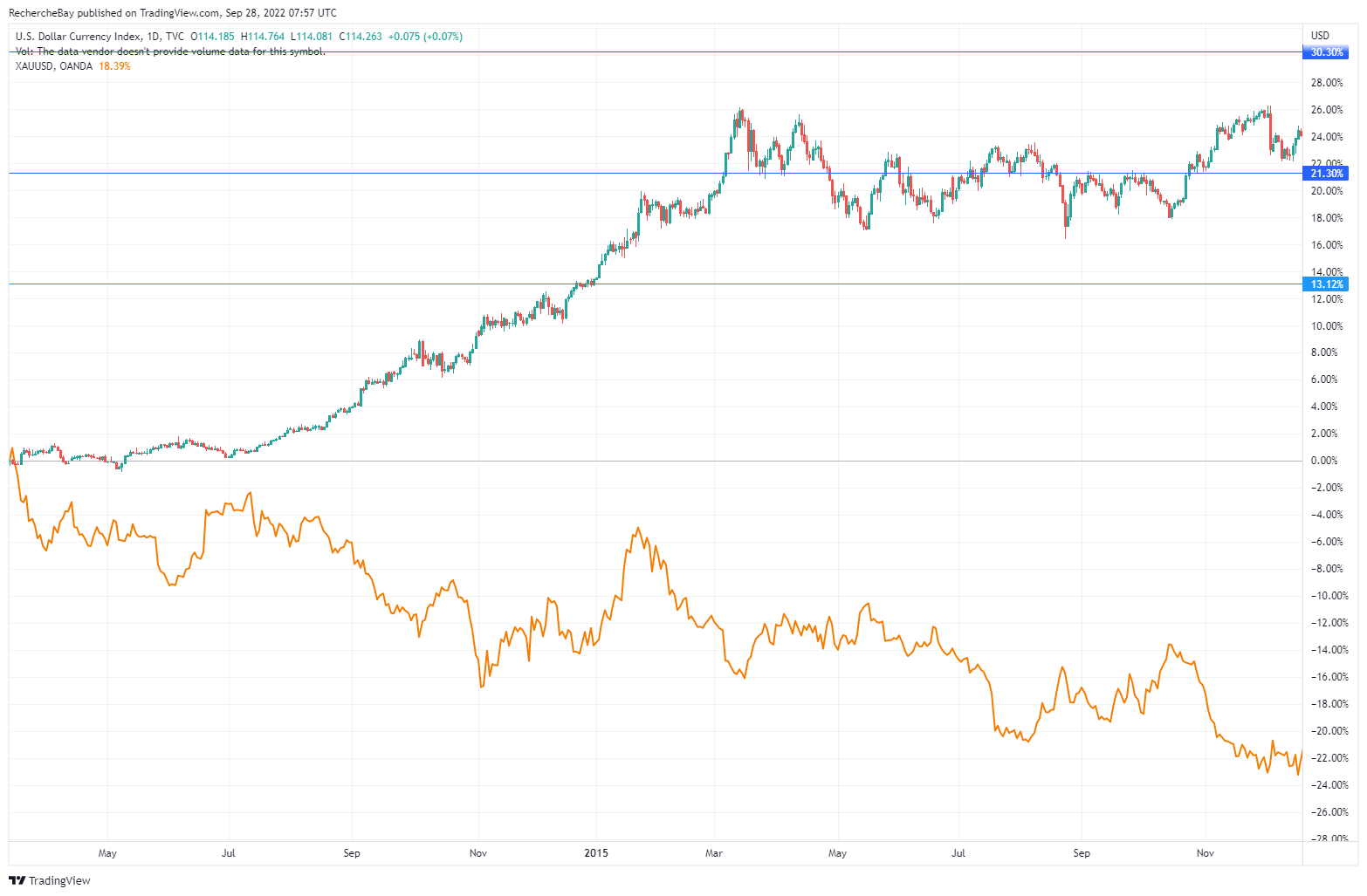 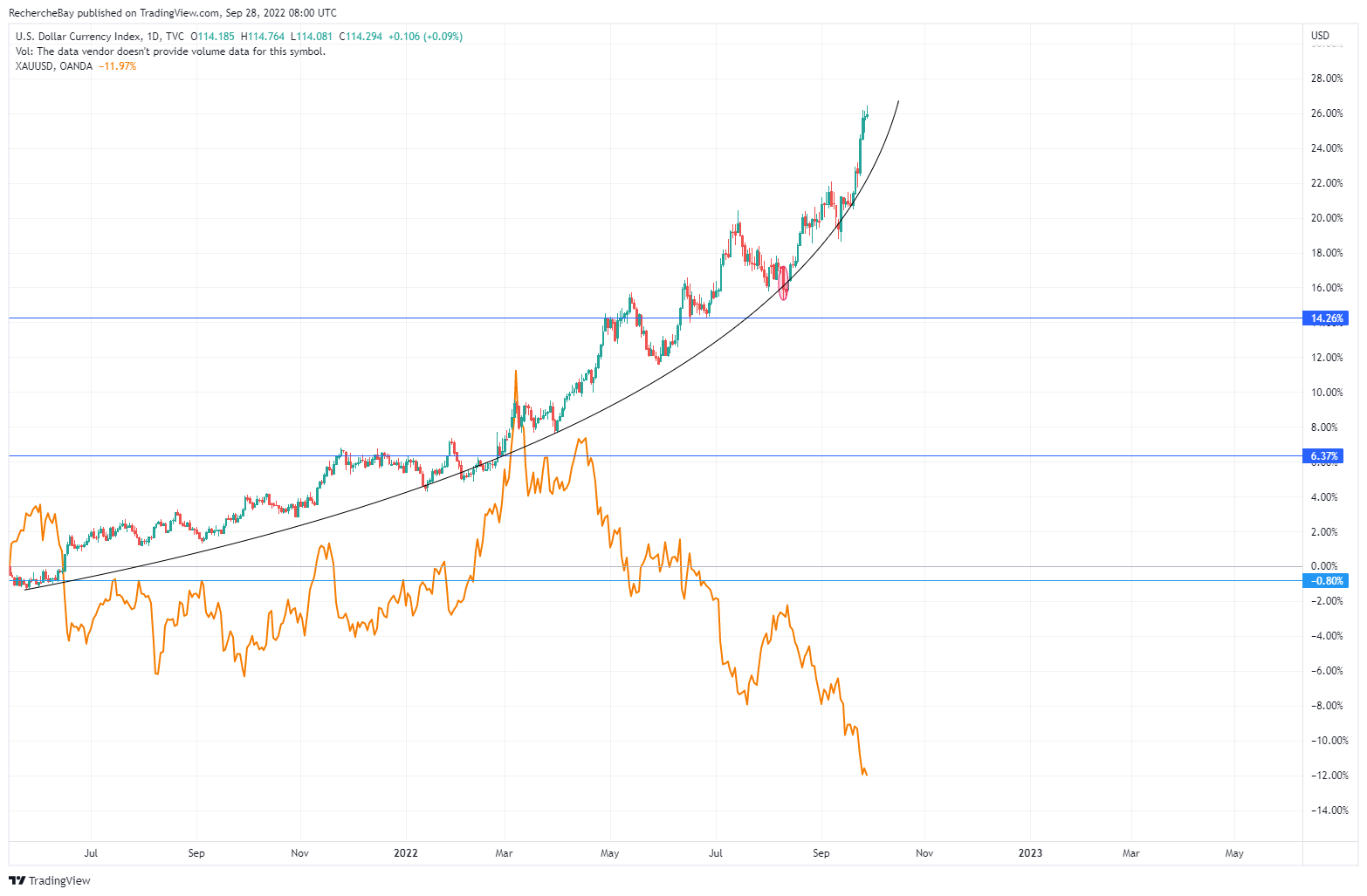 The exponential rise of the dollar combined with the collapse of the sovereign debt bond market has created an unprecedented risk for the entire financial system.

It is in this context that the holding of physical gold outside the banking system, the ultimate insurance against these risks, finds its primary justification.

The correction in the price of "paper" gold still makes it possible to buy this insurance at a relatively low price, although premiums have risen in recent weeks, proving once again that the physical market is quite different from the paper market.