Everything appears to be accelerating this week.

On the inflation front, the latest figures for the index of prices paid by producers (PPI) have come out at over 10%. The last time it was this high was in 1981.

Even if the CPI (the index that the Fed uses as a benchmark) has shown a less marked rise, of 5.3% (the ‘adjusted’ annual progression), the prices in certain sectors of the economy are continuing their dizzying ascent.

These price rises are prompting veritable rushes on orders, which are adding to the logistical problems brought about by the sanitary crisis.

Just as one would logically expect, we are arriving at the next phase of inflation, one that is far more visible: the shortage phase. The supply chain is in the process of being completely disrupted. The effects are being felt particularly acutely in the maritime shipping sector, where the rise in prices has been exponential, and where the bottleneck phenomena are at levels never seen before. Here, for instance, is an image of the Port of Long Beach, in California, which shows a line of more than 50 ships waiting to unload their cargo... 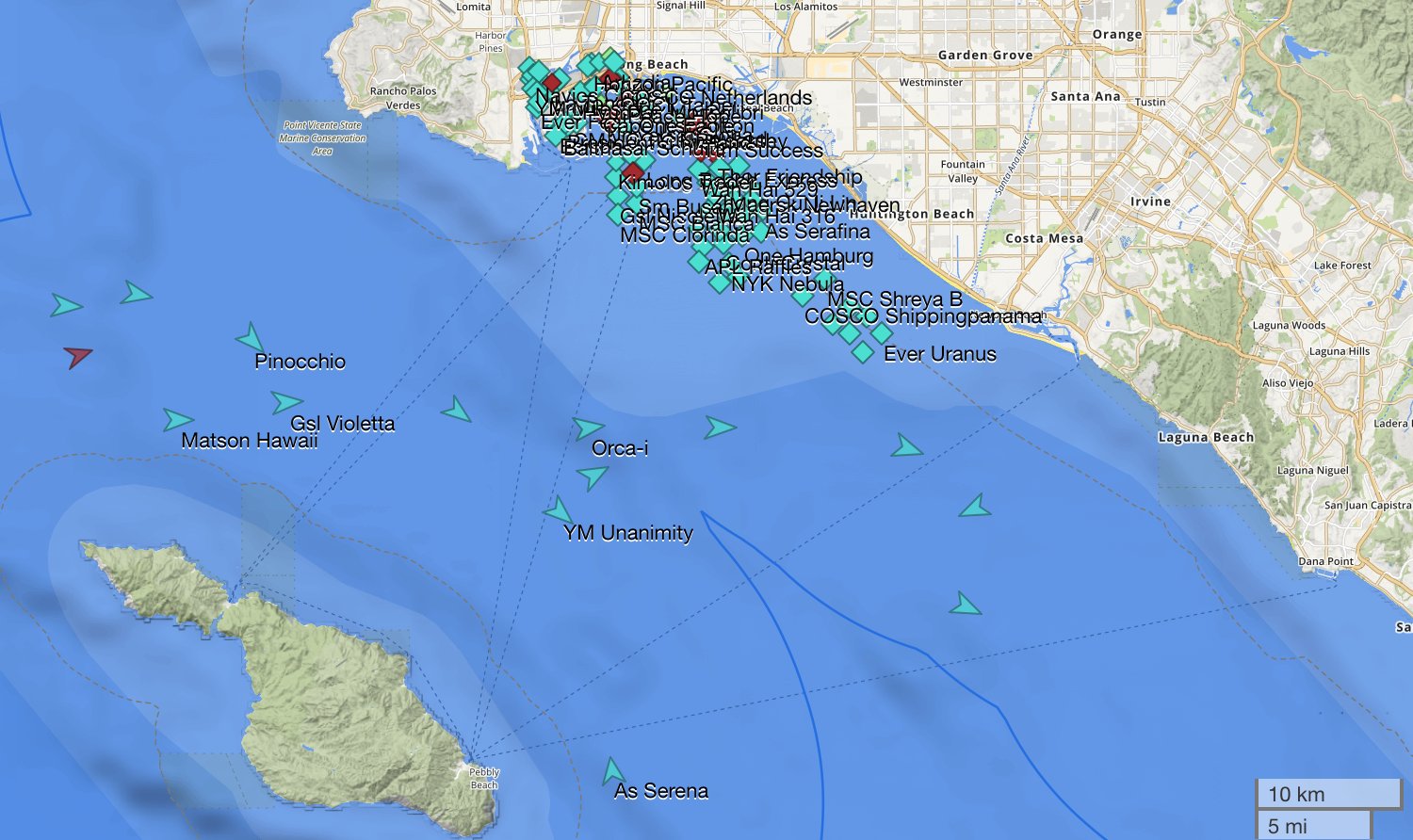 Given the impossibility of unloading cargos on time, there is a high likelihood that the Christmas presents of a large number of Americans are going to remain stuck on board one of these vessels. There is no material solution that can unblock this situation in the short term.

Most observers in the logistics sector think that this situation, whereby the entire production chain is jammed up, will have repercussions far beyond 2022, thus reducing the hopes for a transitory inflation even further. The shortage of certain types of equipment has arrived, and this will undoubtedly have a knock-on effect on the level of prices.

In the United States, inflation is now spreading to the level of wages. Small businesses are finding it harder and harder to hire staff. 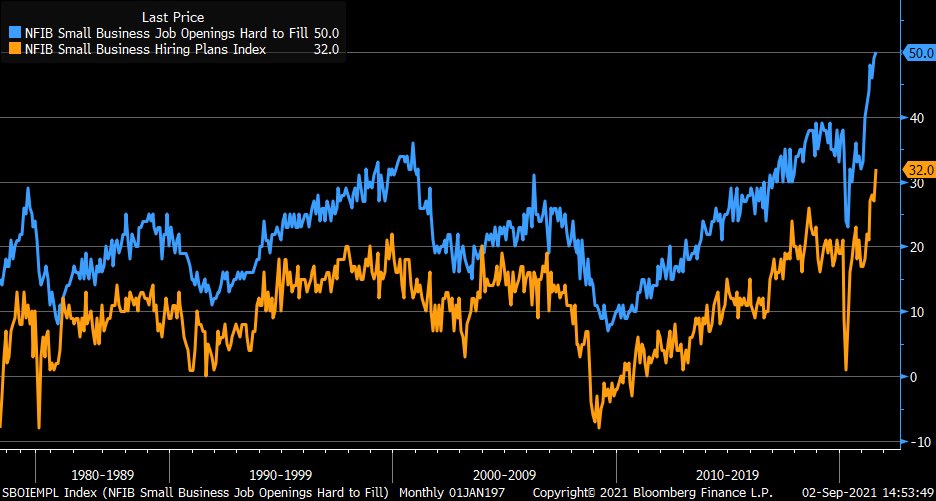 Globalization, which in the past was a highly deflationary factor on the level of wages, is now having a brutal ‘boomerang’-style impact. The disruption to the global production chain is amplifying the inflation and weighing heavily on the rise in salaries, for companies have to find local solutions urgently.

Job openings in the United States are breaking new records: 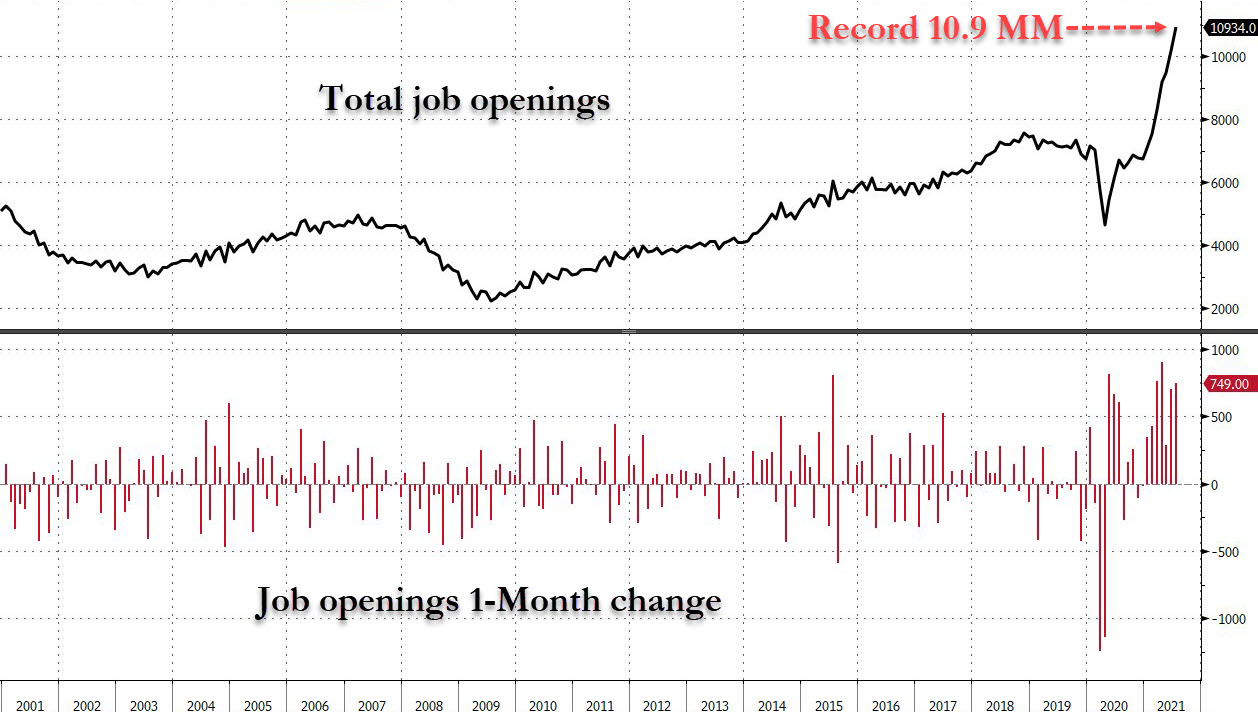 At the same time, there is also a record number of quits: 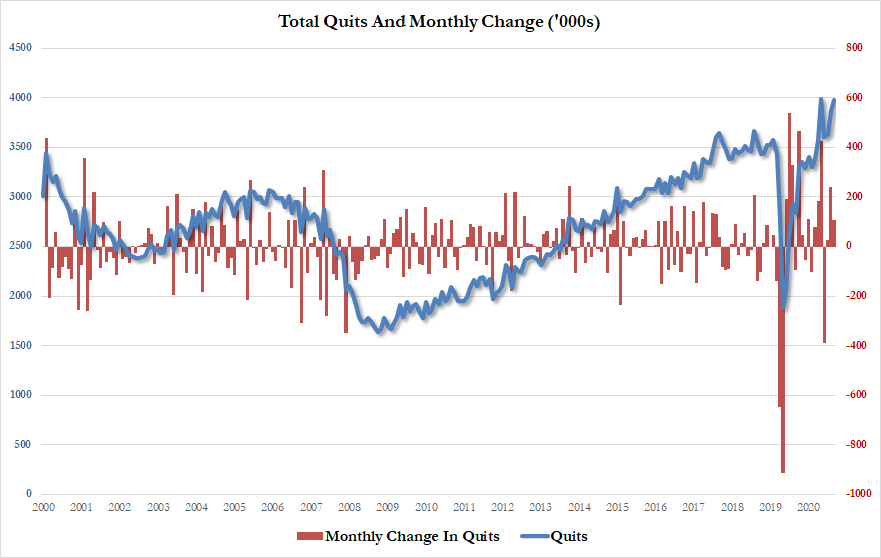 In these circumstances, the pressure on the level of salaries is not going to stop any time soon.

The violence of this inflationary shock is going to be felt this fall on the consumer prices. Businesses will have no choice but to pass on the dizzying rise in costs that they are experiencing to the consumer.

The disruption to the production chain is starting to make itself felt in Europe, where manufacturers are limiting their production in almost all industrial sectors: 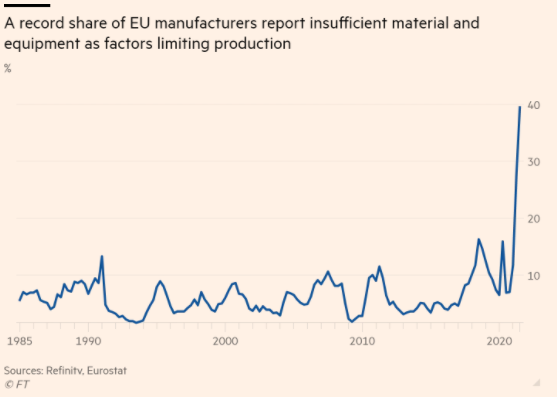 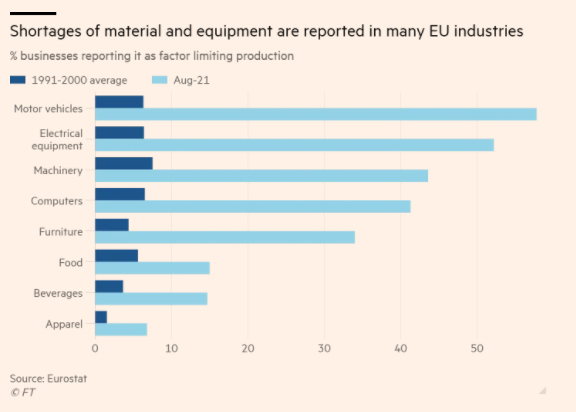 In Europe, there is an additional cause for concern.

This week, it is energy costs that are hitting the headlines.

Natural gas prices have quadrupled in just a few months (they are up 60% since the start of August!). 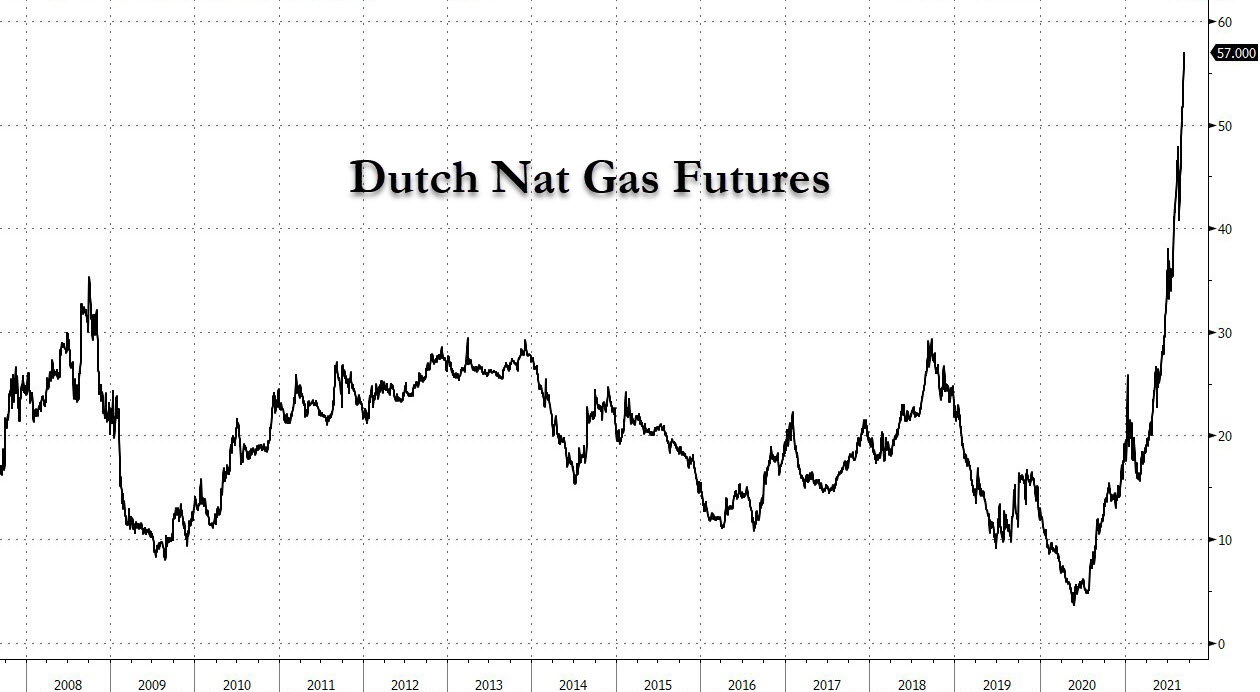 Electricity prices have more than doubled in Europe, in barely six months: 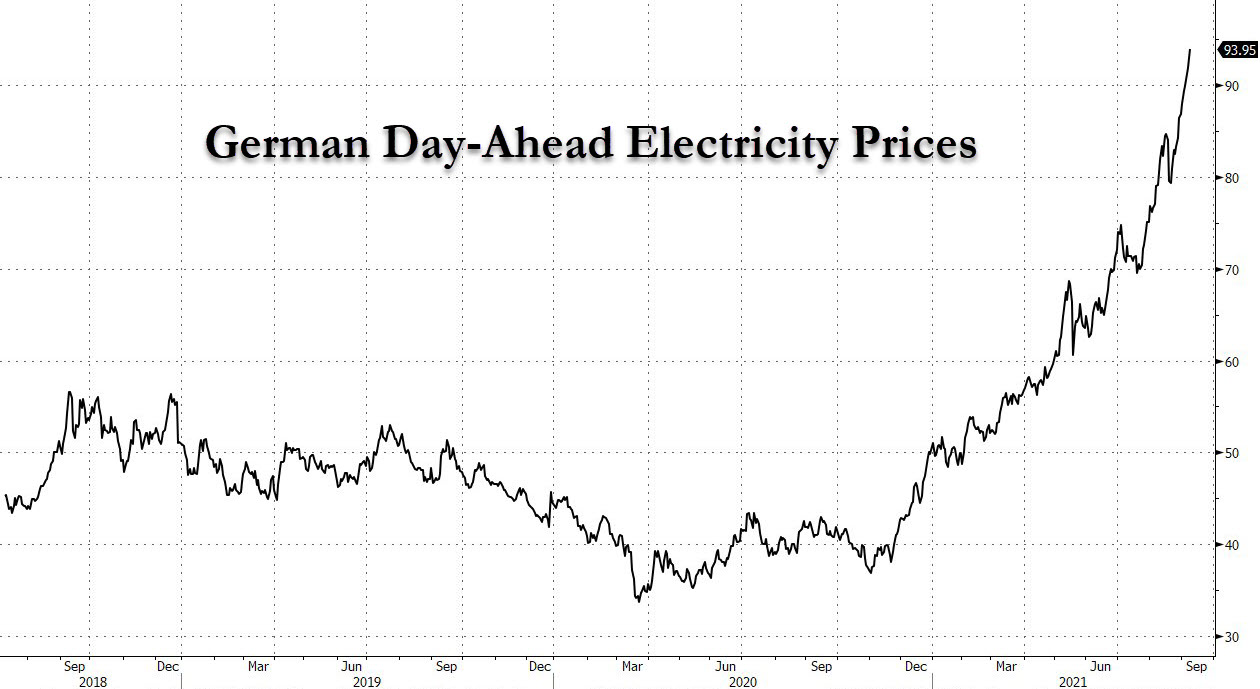 In the UK, the phenomenon is even more spectacular: 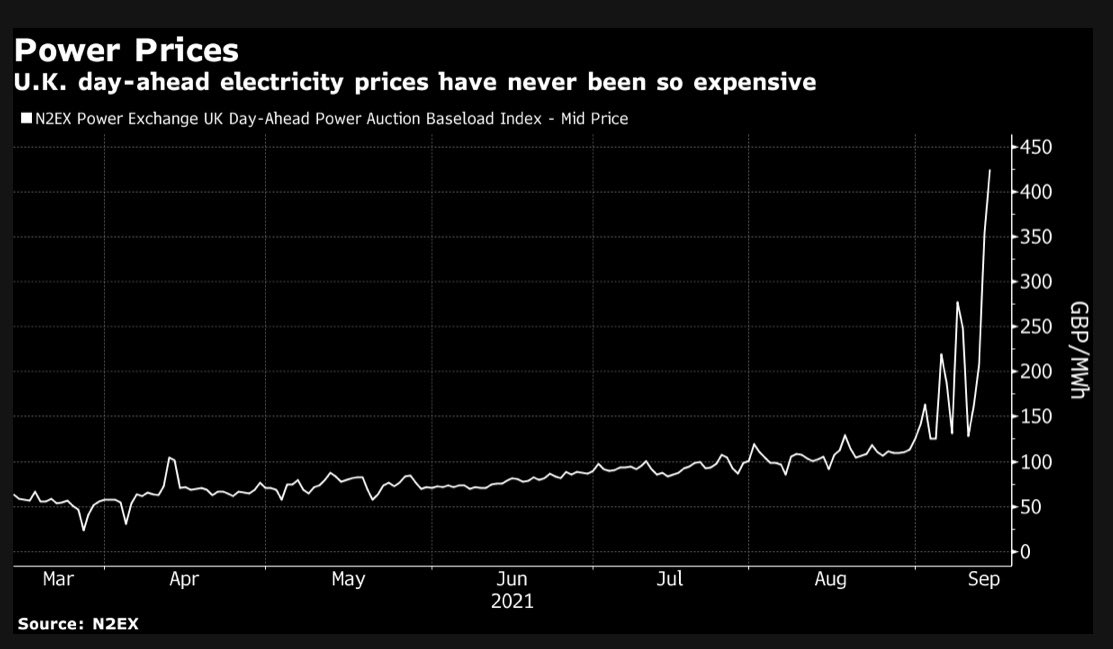 This dizzying and sudden rise in energy prices cannot fail to have consequences on industrial activity in Europe over the coming months.

In parallel to this rise in the prices of fossil fuels, the shortage of certain commodities is having a very strong impact on the manufacturing costs of alternative sources of energy.

This is particularly true in the solar panels sector, as described in this article by Oilprice.com. The price of constructing a solar panel has already risen by almost 20%, primarily due to shortages of polysilicon and silver.

Cyrille Jubert explains in a recent article the whole issue around this market, a market that is so very different from the others.

The tensions on demand are very substantial, but in the case of silver, it is supply that is posing a problem.

The silver price manipulation over the last 15 years has depressed the sector so much that this has caused profound disruption to new mining activity. In this industry, the cycles are very slow: it takes more than ten years to launch a mining project, and today we are paying for the depression and the lack of investment in the 2010s in the junior minings sector.

For those still in any doubt about the impact of the price manipulations, this article from Bloomberg provides a reminder of how easy it is for a big financial institution to influence the prices of precious metals. The technique used up until 2015 was mainly “spoofing”, which involves placing a huge order and then cancelling it at the last second, to bring about big variations (usually downward ones) in the prices of futures. With the abundant liquidities available to these institutions, it is very easy to manipulate a ‘paper’ market as narrow as this. Little tricks like this have made many traders rich, but they have also contributed to making a considerable number of investors flee, in a sector that currently has a profound lack of capital. The deficit in supply that we are seeing is, above all, a consequence of this nefarious way in which the futures market works. We are paying today for the lack of investment yesterday, because the markets failed to play the role they should have played for the investments of an entire industry. The people responsible for the shortage to come are the ones who let these markets turn into casinos for these large institutions, by moving them away from their original role, which was dedicated to the mining industries. The reconstruction of the mining sector that we need so badly today is now going to brought about at a far higher cost. The price of the energy transition towards renewable energy, which consumes a large amount of metal, will be all the higher as a result.

Silver is important on the industrial front, but it is also a metal that has an intrinsic monetary value.

Astonishingly, gold has stayed at fairly high levels in spite of the soaring stock markets, and associated euphoria, this summer.

The latest data published by the Comex show that a non-commercial speculator (it’s not a bank) has taken a long position on more than 4 million ounces in the last few weeks and is taking advantage of every ebb in the gold prices to increase his position. Ted Butler believes that the speculator in question is John Paulson, the American billionaire who in the past managed to foresee the debacle with ‘toxic’ property loans that was at the origins of the financial crisis in 2008. It is likely these recurring purchases that are allowing gold to stick to its bullish trend, despite the major correction on 10th August last year. 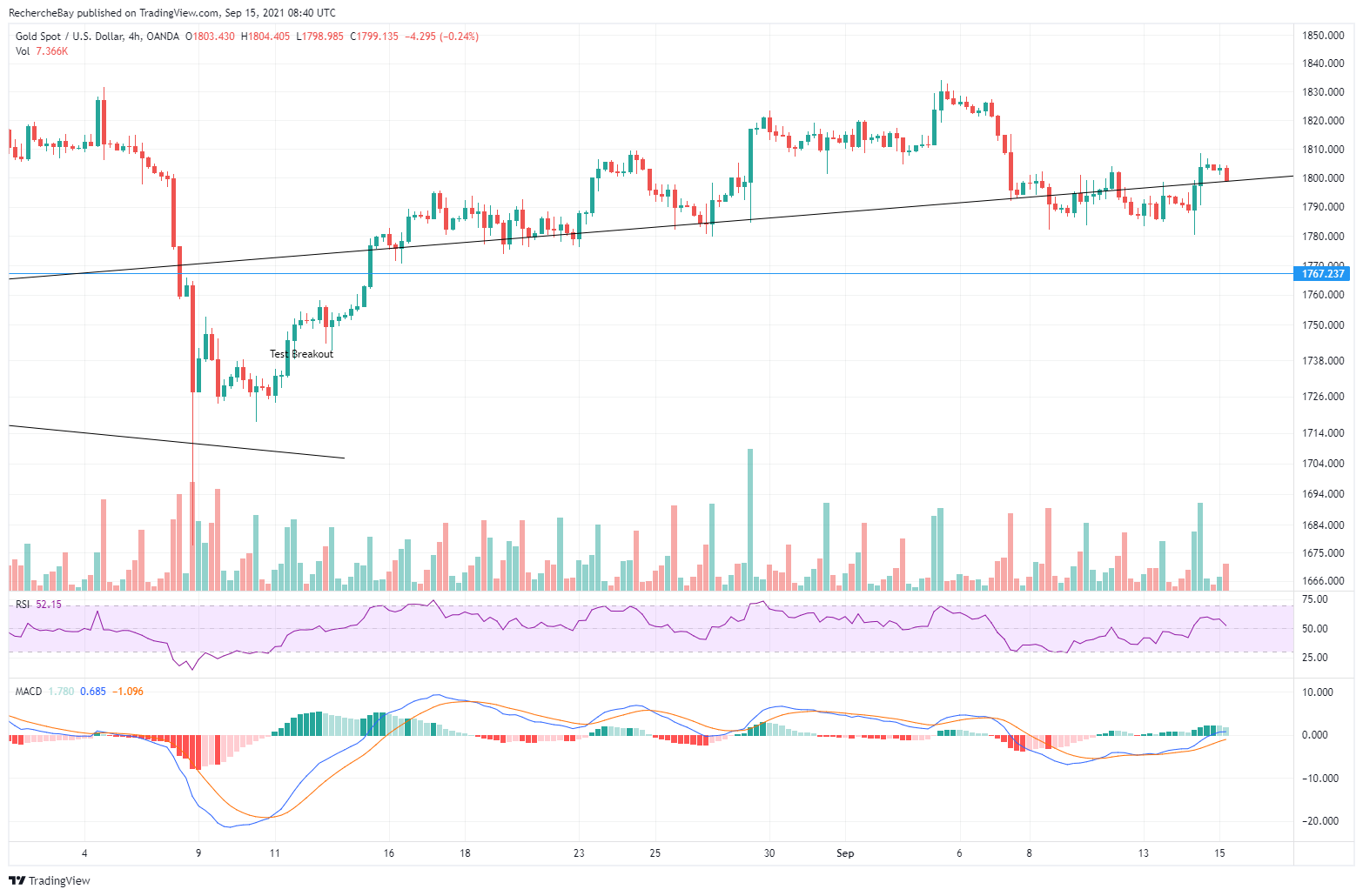 Each fall in the futures market is now being purchased aggressively.

It remains to be seen whether this unprecedented long position will lead to requests for physical delivery...something that, taking the current level of demand in the physical market into account, would likely lead to global problems with the supply of physical gold. One thing’s for sure: the next few weeks will be closely scrutinized on the Comex.

In contrast to the Canadian mining stocks, the Chinese ones are mainly held by insiders. Why did they buy, en masse, at the start of the week?

Is this a form of protection against the Evergrande storm that is on the horizon? (to refresh your memory, Evergrande is the Chinese financial institution that is on the brink of bankruptcy, after chalking up several hundred billion dollars’ worth of liabilities in the property sector).

Or do these purchases on the Chinese mining stocks presage wide-ranging monetary reform in China?

Whatever the answer, if we look back at the past, these bullish drives in the Chinese mining sector are an early warning signal of a contagion to the other mining stocks around the world. Generally speaking, this tends to start with the Australian market, and as we have already seen, major players like Newcrest have already bounced back well in the early part of this week.

Nevertheless, there is a strong chance that the news about precious metals and the mining companies will be lively between now and the end of this year.