This week, the news is marked by the crisis of confidence in the entire cryptocurrency sector after the spectacular fall of the FTX exchange platform. This article will not revisit this event which has been widely reported in the financial press. Our goal is not to follow this particular market.

However, we can logically expect that this new "black swan" will complicate things a little more on the markets, which will have to face a liquidity problem related to margin calls caused by the victims of the crypto crash. These margin calls are likely to affect all paper assets and make the next few sessions uncertain.

One major element is nevertheless protecting the indices from a downturn: the number of open bearish positions on the SPX is at a record high. These peaks of pessimism often coincide with market rebounds. Market makers love this type of configuration to initiate squeezes when too many put positions are open. 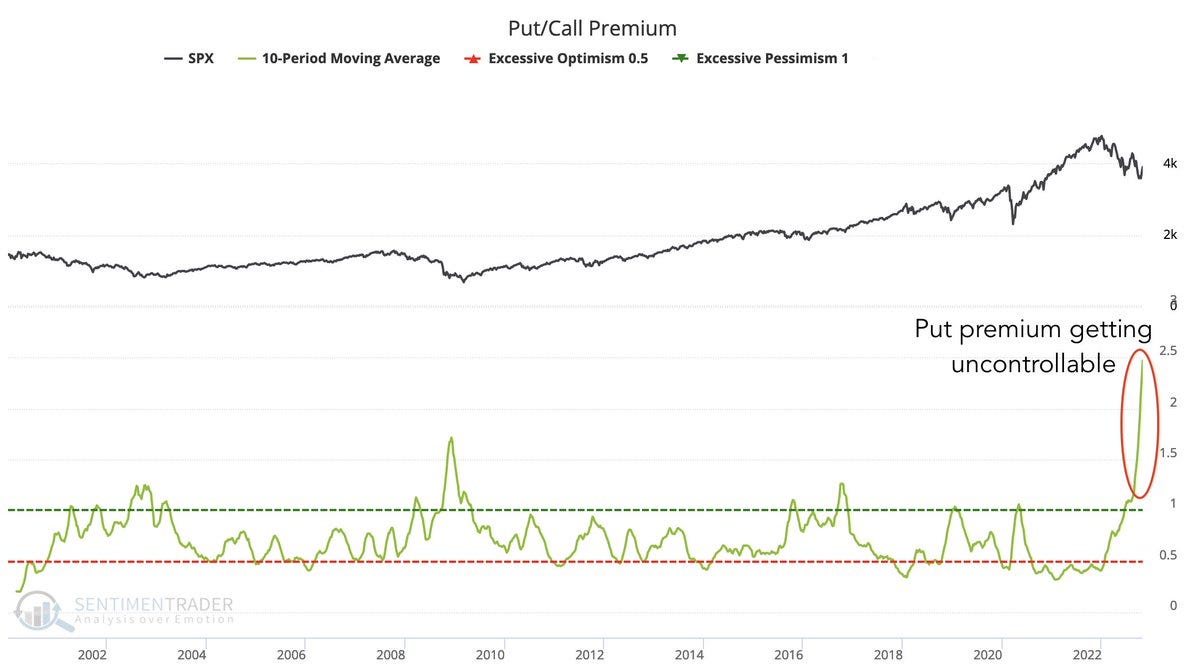 The reaction of the markets to the consequences of the crypto crash may therefore prove difficult to read.

The other event of the week was the release of the latest US inflation figures.

The CPI index came out weaker than expected in October, at 7.7% year-over-year.

"I think we're at the peak in inflation" is the favorite catchphrase of most observers and portfolio managers in the midst of the fall of 2022.

The drop in shipping rates is accelerating, especially on ship rotations between China and Western countries. This is a sign of an economic slowdown, but it is also a sign of an economic embargo on Chinese products. In recent meetings with mining producers, I have sensed a concern about likely trade constraints with China, in a geopolitical context that will undoubtedly worsen in the coming months. 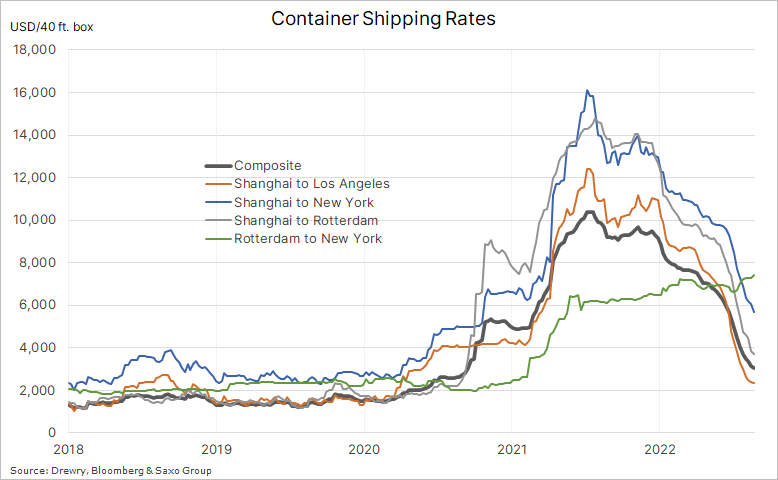 Among these raw materials, those linked to the construction sector are the most affected. Especially since this sector has been one of China's growth engines in recent years.

The price of lumber has returned to its pre-Covid levels: 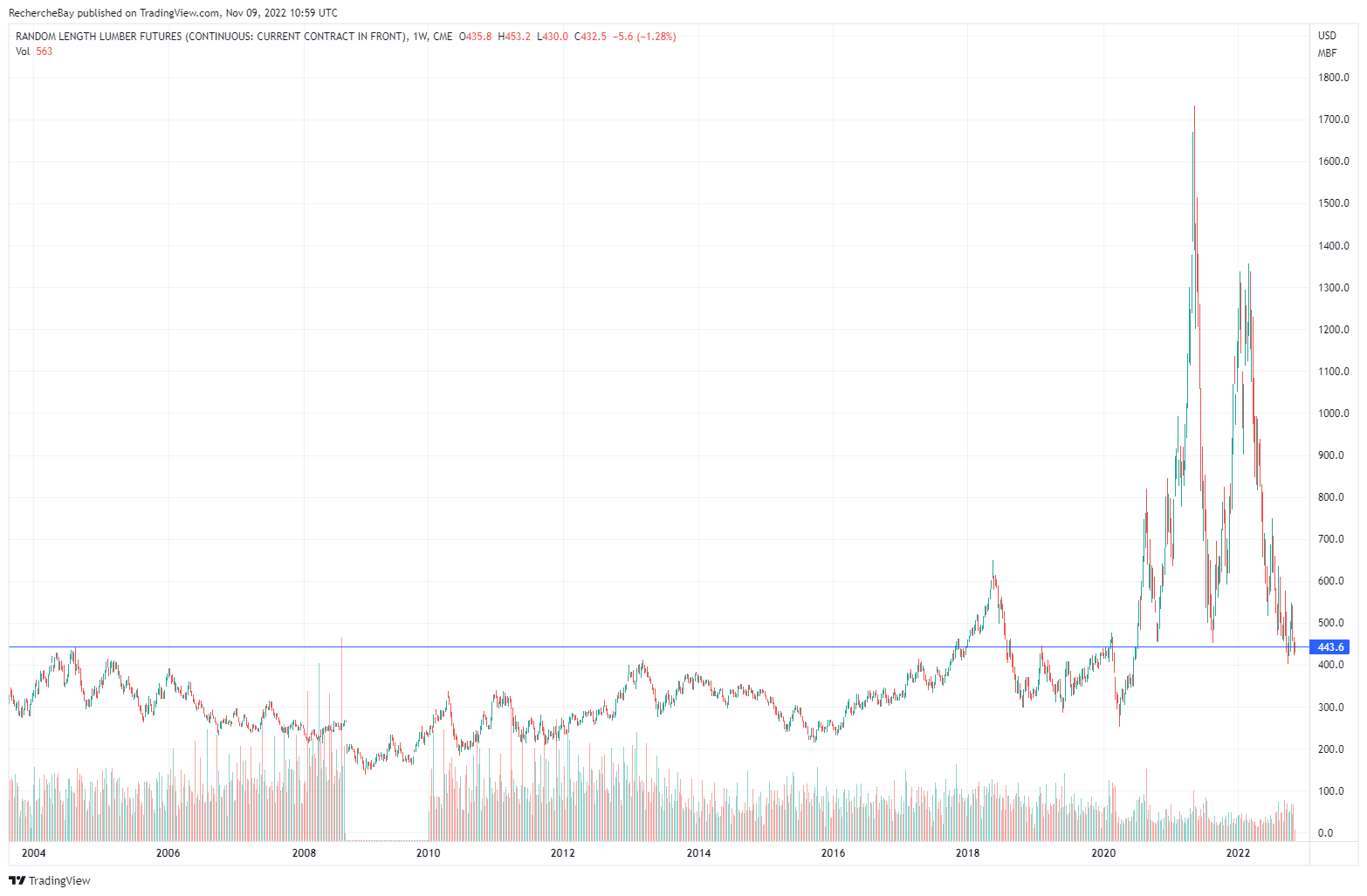 It's true that U.S. housing numbers are currently in a tailspin. Housing starts are plunging at a rate never seen before, even at the height of the 2008 housing crisis.

But the housing sector is not the only one suffering from a drop in activity.

The used car market is experiencing its largest annualized decline since 2008 this month, after a dramatic increase last year:

The Fed seems to have achieved its goal: the demand for houses and cars in the US has literally disappeared!

Will this be enough to bring inflation down for good? While this may be a question across the Atlantic, we are far from seeing any decline in inflation in Europe.

The PPI index, which measures the prices paid by European producers, is rising everywhere. This is a major difference from the United States, where the index is, on the contrary, stabilizing.

In Italy, the PPI has even exceeded the 50% mark for the first time, heralding an uncontrolled rise in consumer prices in the coming months: 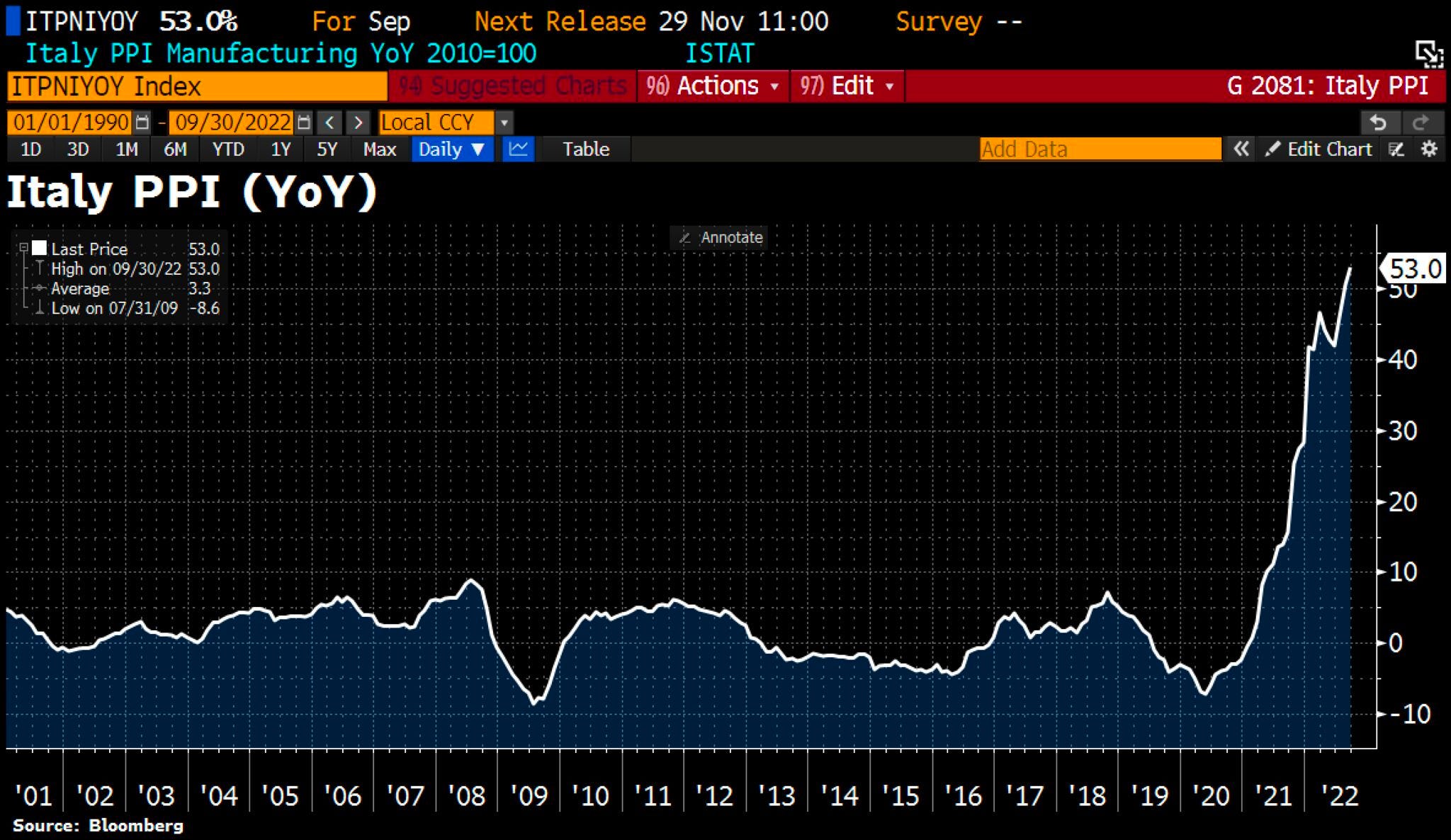 In addition to having devastating effects on activity, persistent inflation is also deepening the losses of European savers.

This is even more visible in Germany: even though rates have risen to 2%, inflation is rising faster and real rates continue to plummet. The ECB's lack of responsiveness to inflation is turning into financial repression for German pensioners and savers, with negative real returns deteriorating even further. 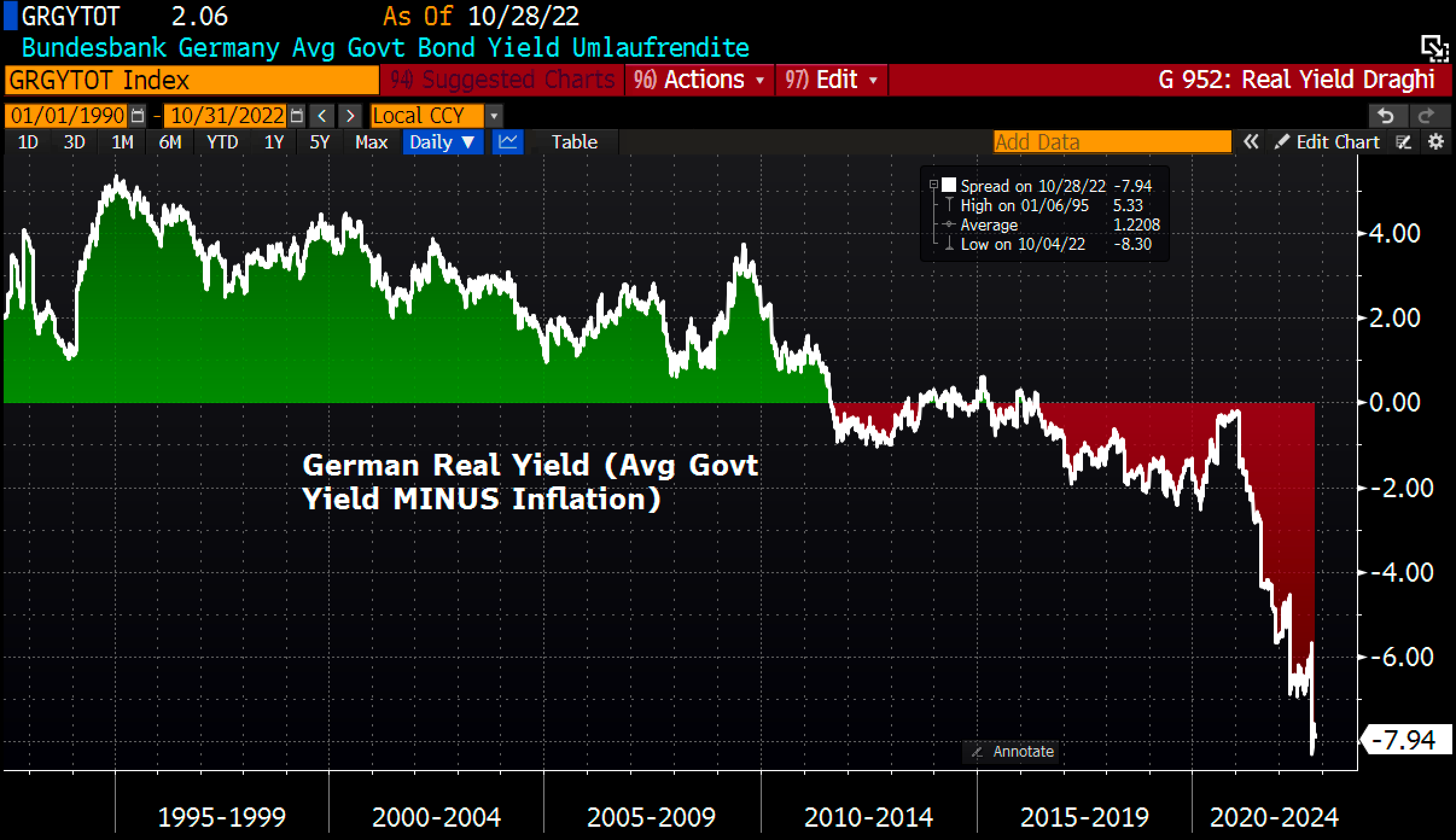 Fixed income managers will have to explain to their clients how an investment that is considered "non-risky" can have such large losses. Let's take the example of a client who has invested €10,000 in a European government bond product (life insurance, for example) which yields very little (less than 2%, because at the time he signed this contract, rates were very low). He notices that the unrealized losses on his investment are major at the end of the year. His financial advisor will reassure him by explaining that if he does not sell, he will not realize his losses, and that he will continue to receive his (very low) remuneration of a few tens of euros and will receive his €10,000 after ten years. But the advisor will probably not tell him that at the current rate of inflation, this €10,000 will not be worth much in real terms in ten years. Nor will he tell him that an equivalent bond product taken out today would yield much more, because rates are now much higher. Except that the client will not be able to switch from one product to another without realizing his losses on his old contract! The client will leave the meeting with the impression of having been tricked by his advisor, whereas the latter has nothing to do with it. He is the victim of an absurd monetary policy that damages the relationship of trust that he had so much trouble building with his client!

This crisis of confidence now extends to the very value of the European currency.

There are more doubts about the situation in Europe.

The ECB has not yet reduced its balance sheet. The quantitative easing program has not yet really been stopped. What will happen when Europe enters a recession? Will the ECB be forced to launch a new QE? How can we not envisage, then, that the only outcome will be hyperinflation? This is the risk that the European monetary authorities are taking. Such a situation would be dangerous, because it would threaten the social and political cohesion of all the countries in the eurozone.

Given these risks, it is logical to see gold in euros rebound above its uptrend line. The price of an ounce of gold is now challenging its next resistance level at €1750. 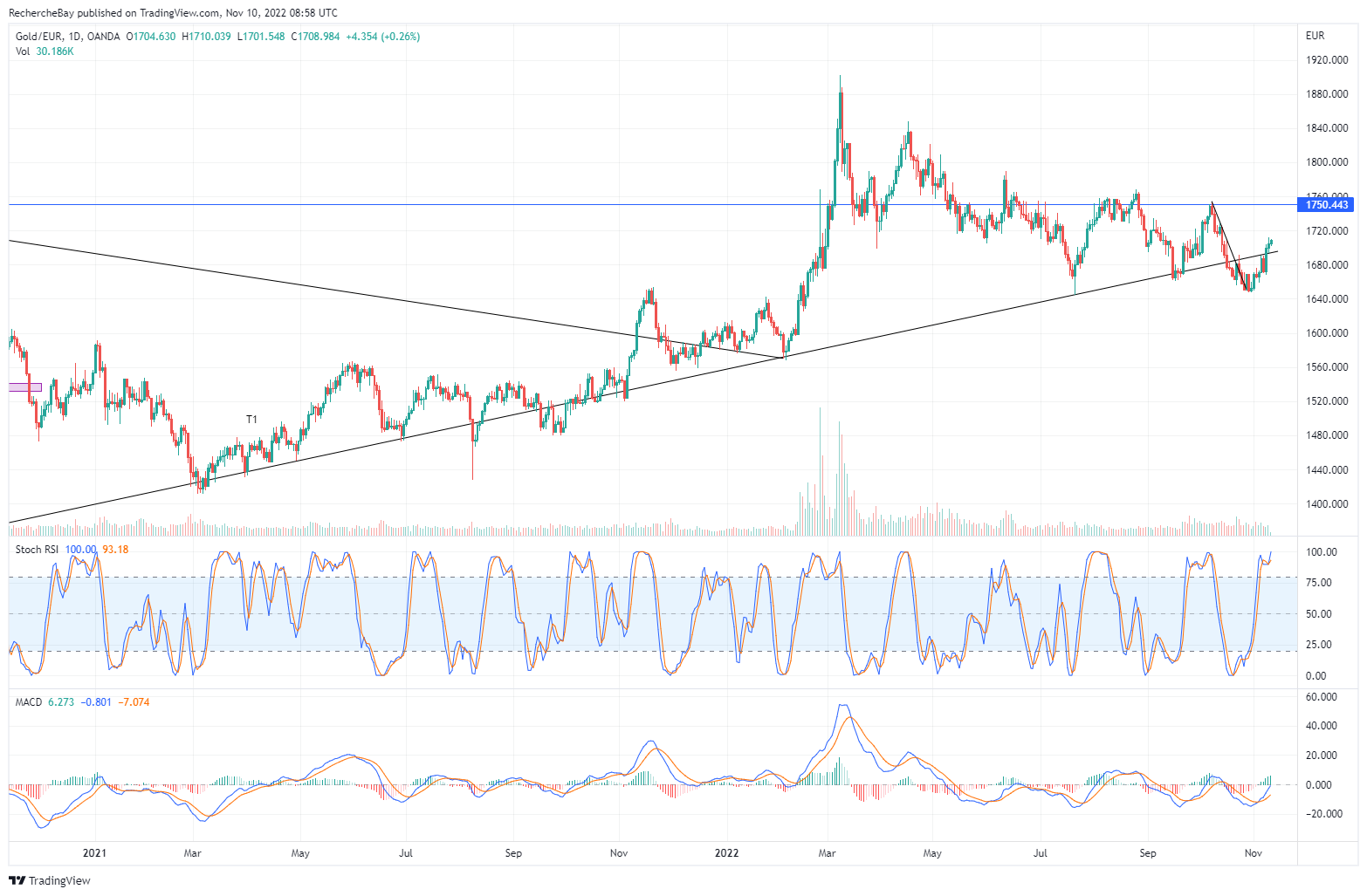 On the physical gold market, the Perth Mint sold a record 183,102 ounces of gold and 1,995,350 ounces of silver in coins and bars in October. An historic record in Australia!

Australian real wages are in free fall, heading for levels not seen since 2008. And forecasts do not indicate a significant rebound from these levels. 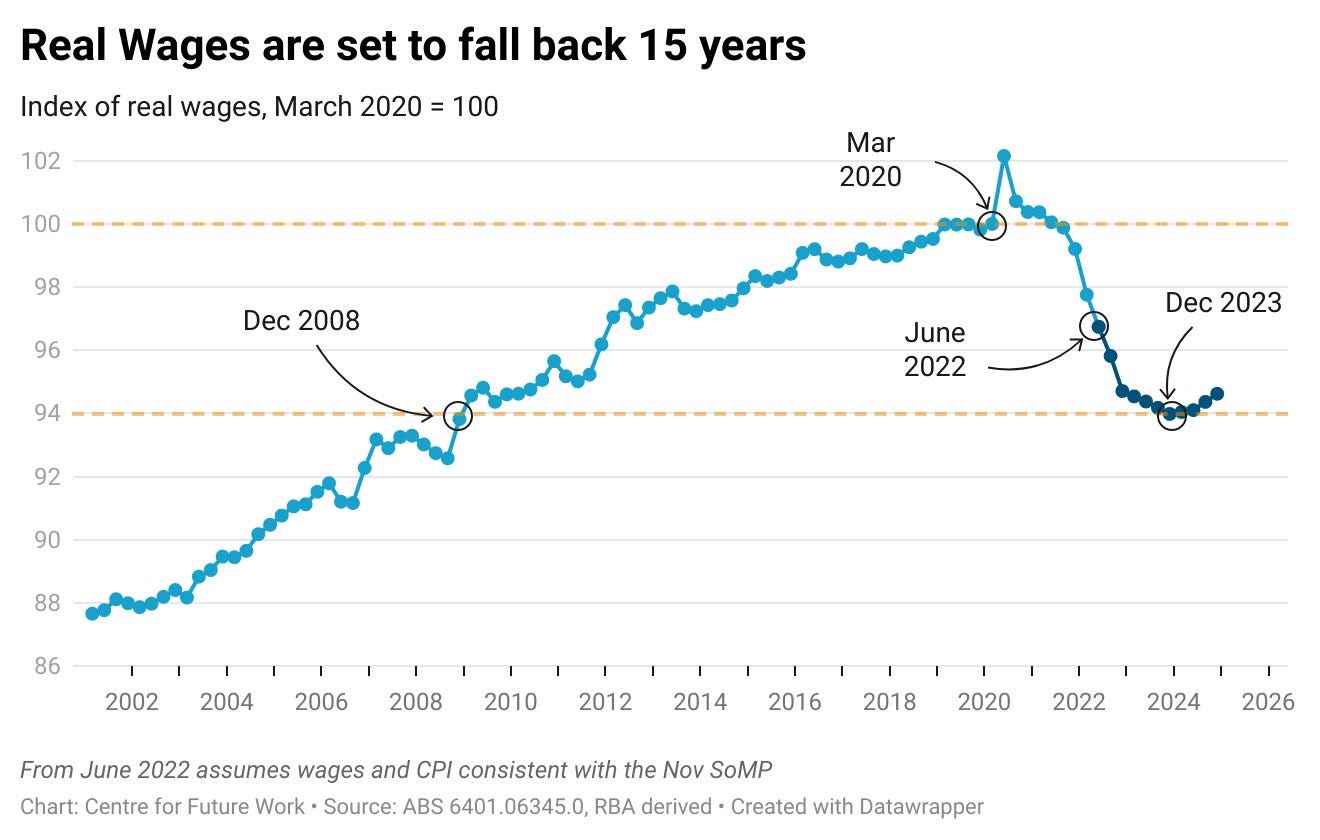 It is probably to cope with this loss of real income that many individuals have decided to invest part of their savings in physical gold and silver.