The U.S. central bank has just decided to slow down its asset purchasing program (tapering), but has left the rates unchanged while doing so.

The Fed will continue to grow its balance sheet until December. Whilst these measures send a signal to the market that a change to monetary policy is coming, they are unfortunately not up to the task of dealing with the immediate inflationary risk.

The fiat money is losing value at an unprecedented rate, and with it, all the interest from savings backed by bonds products with a yield of zero, or even a negative yield.

The value of ‘paper’ investments is decreasing due to the brutal rise in inflation.

Let us take by way of example a saver who has invested everything in a product that is ‘low’ risk (on paper), backed by the German 10-year Bund yield, who is supposed to be preserving his capital without exposing it to too much risk. Today, the immediate risk on this type of product is, without a doubt, not a market risk, but a risk associated with inflation.

The real yield of this product has been destroyed in recent months and has now reached the unprecedented value of -5%: 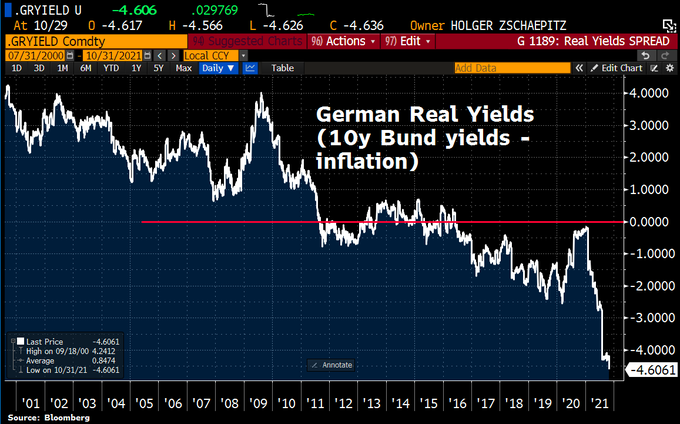 A real yield that is hovering at around -5% is a sure sign, for a saver with capital of €1 million, that he or she is going to lose approximately €5,000 per month on the basis of the rate of inflation. This is starting to get noticed, and this will be all the more the case if, on top of that, the effects of inflation on day-to-day life start to make themselves felt. 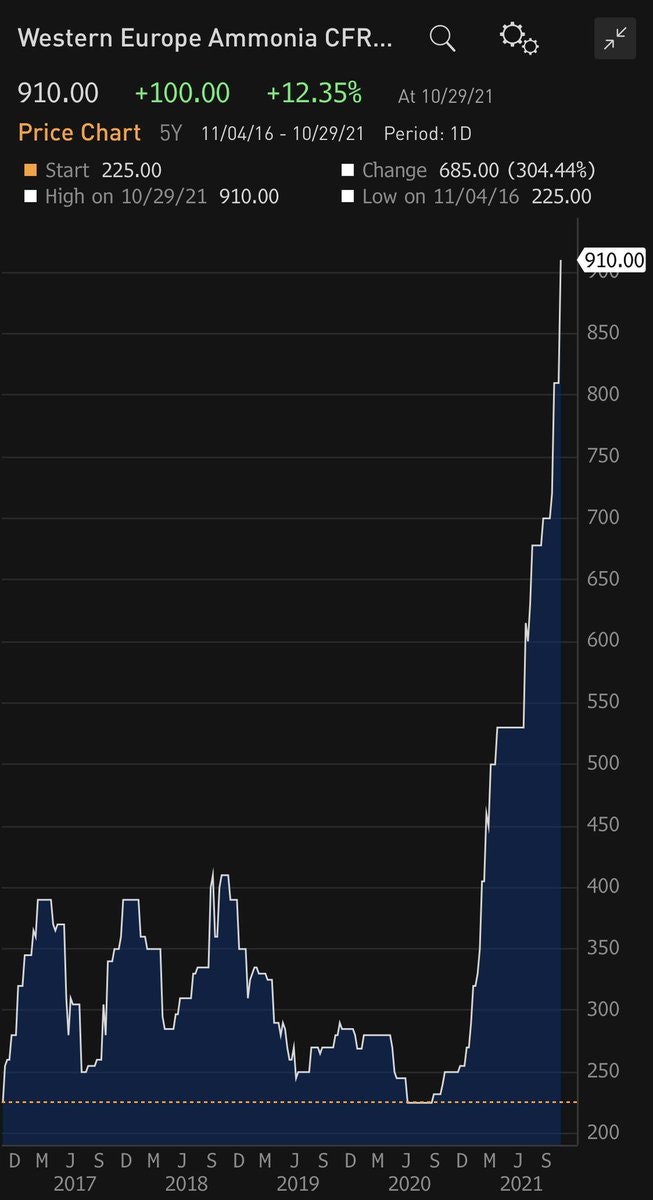 The rise of inflation in Europe is gradually altering the public discourse. Christine Lagarde has no option now but to admit that the period of rising inflation is, ultimately, going to last longer than expected, at a time when its effects are just starting to make themselves felt in daily life... 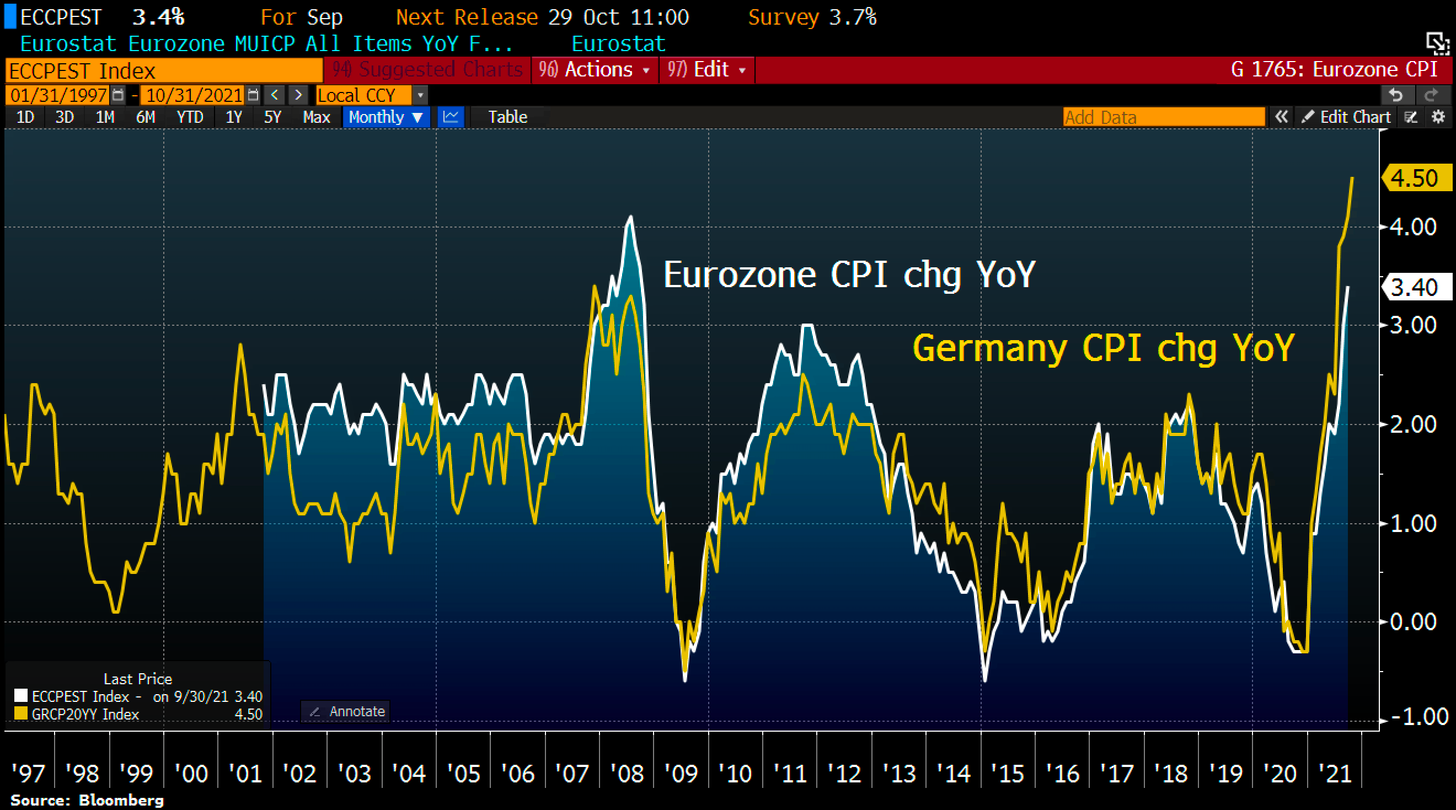 What message will the monetary authorities seek to convey when the shortages of metals that are essential for industry prompt prices to soar even more spectacularly, and cause production chains in Europe to hit the wall? And when will the rise in the price of fertilizers have a knock-on effect on the price of food, at the risk of provoking the kind of civil unrest we have seen in such cases before?

In an article, Stephen Schwarzman (the CEO of BlackStone) warns that the rise in energy costs poses a risk to social harmony. The current shortages are a sign that energy costs are going to get even higher. In short, not only is inflation no longer transitory, but it is at risk of accelerating on essential consumer goods.

The shortages are already clear to see when it comes to certain products in the United States. This is not yet the case in Europe. 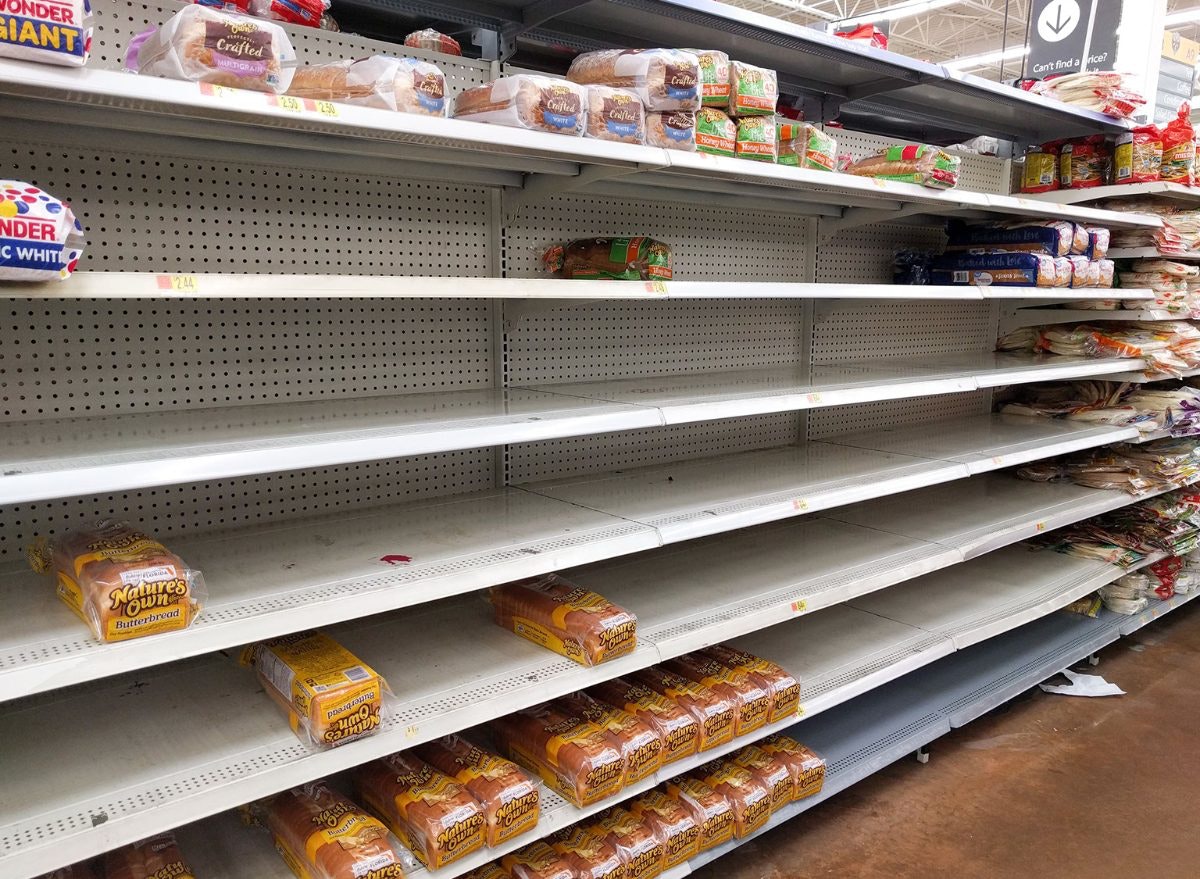 Bloomberg is reporting that China is warning its people that there may soon be shortages of food. The country is even recommending that its populace start to stock up on essential goods, in a scenario where Covid cases are rising once again.

These shortages are the consequence of the monetary policies implemented for over 10 years: the central banks suppressed the fundamental law of supply and demand. Money-printing, by creating artificial demand that was not sustainable, is the cause of the disruption to the supply chain that the Covid crisis has only exacerbated. The policy of quantitative easing is not the solution right now; instead, it is the source of the problem.

The markets will only recognize this monetary failure when these policies are brought to an end. It is then that we will see the real cost of the asset prices that have been artificially suppressed. The yields on government bonds are not at their rightful price today, and it is the savers that are being made to pay for this. When a central bank decides to stop manipulating its interest rates, however, the return to reality is brutal. That is what happened this week in Australia, where the 2-year yields soared the moment the Australian central bank (RBA) announced that its quantitative easing policy was to end. 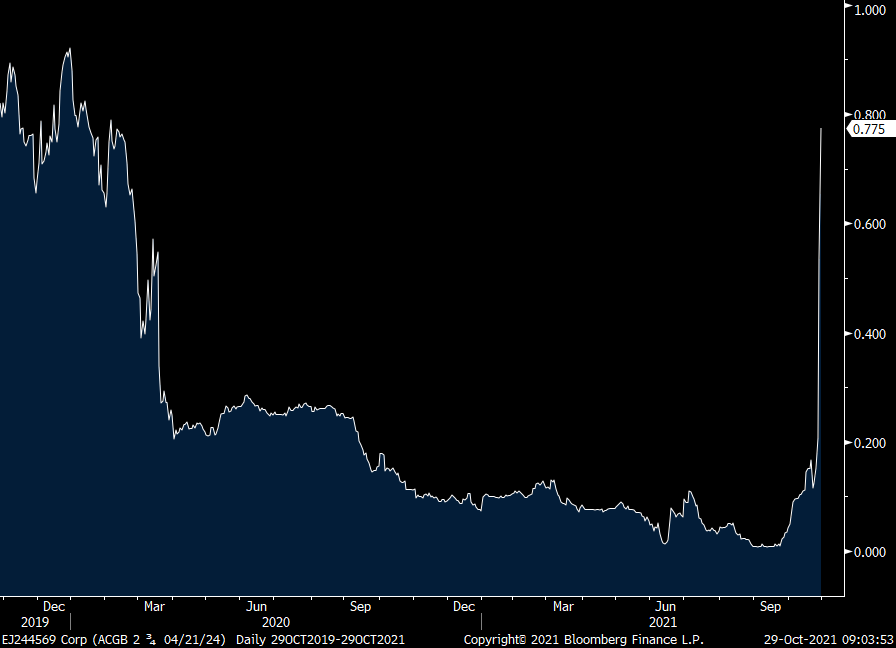 Australian bonds have undergone massive sell-offs. The Australian property market is on the brink of a brutal downturn - this too has been prompted by the soaring yields. This very strong reaction by the markets in Australia marks the failure of the country’s monetary policies. However, what the Australian bank has done is no different from what the other central banks have been implementing over the last few years. The stopping of the support measures is the manifestation of the failure of these monetary policies. One can well understand, today, why the Fed and the ECB are extremely reluctant to ‘mark’ this failure with overly aggressive cuts to their support plans.

To act in too violent a manner would risk bursting the bubble of assets (real estate and financial assets), whose value depends solely on the policies of low rates and asset purchases.

With the current valuation on the markets and the brutal emergence of inflation, the yields of the U.S. stocks have never been so low, at a time when the Fed is signaling that it is going to call time on this monetary policy... 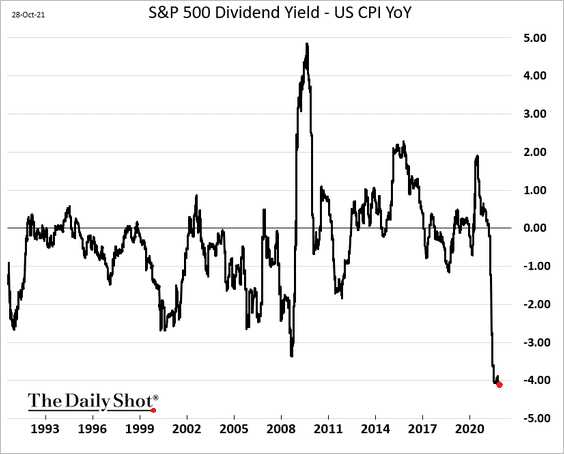 The Stock Exchange, which had hitherto served as a refuge for institutions seeking better yields than the bond ones, is at a level of risk of correction similar to the one seen in the previous financial crises...and today, it no longer offers the prospect of yields that are sufficiently high in relation to the level of inflation.

Inflation is pushing up businesses’ costs and the problems with the supply line are increasing the uncertainty about future sales.

It is on the essential component of wages that inflation is most significant when it comes to safeguarding businesses’ margins: 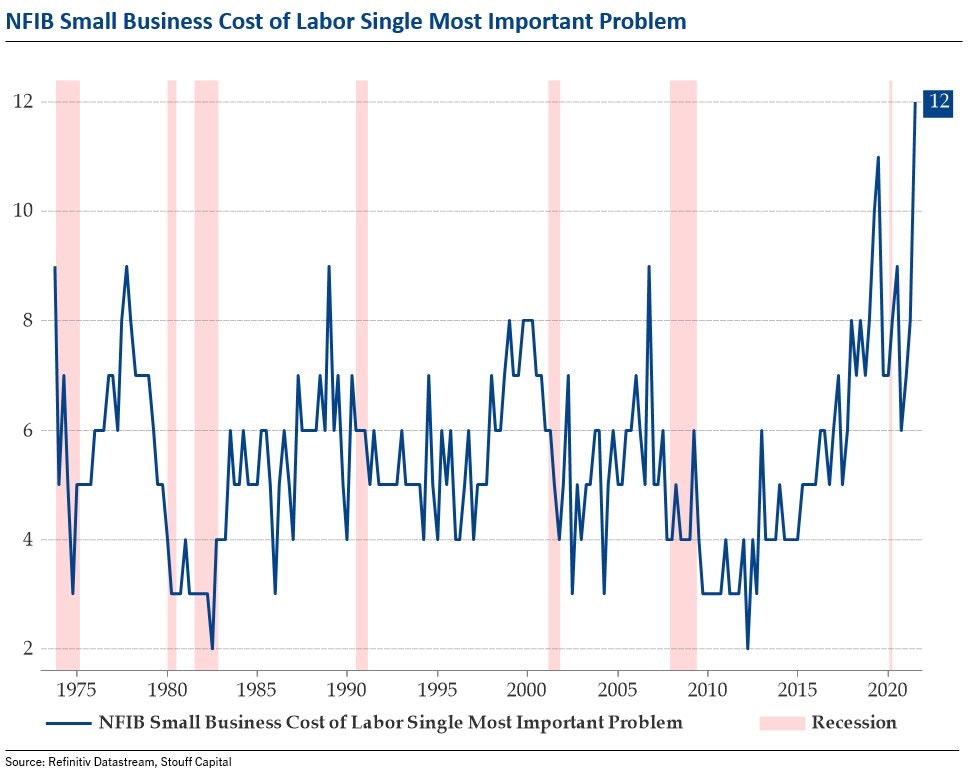 Businesses’ sales behaved well in a period of low inflation. This is no longer the case today, for inflation is weighing heavily on businesses’ margins.

Without direct interventions in the form of purchases of businesses’ equity by the central banks, the businesses are going to have to double up on their sleight of hand with the bookkeeping, in order to prop up the price of their stock in the quarters to come.

This challenge will be all the more difficult for them to meet if the rates start to rise again. For the time being, the market is not yet registering the Fed’s loss of control over the rates. This confidence has been weakened, though, by the rise in inflation and the loss of faith in the capacity of the Fed and the ECB to control this brutal rise in prices.

1/5 of the companies listed on the SP500 are not generating the cash flow required in order to repay the interest on their debts, even at the market’s current absurdly low rates. If the U.S. rates were suddenly to take off, just imagine the disastrous impact that would have on these companies’ cashflow...

Faced with these risks, U.S. savers are taking refuge in cash. The deposits held in current accounts are reaching record highs, money is accumulating in bank accounts...at the very moment when the value of this fiat money is being devalued at an ever-faster rate... 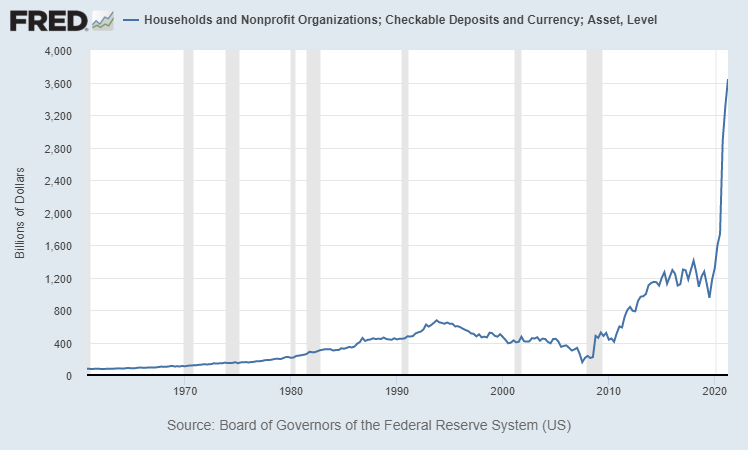 Confidence in the dollar is, for the time being, stronger than the realization that ought to be prompted by the loss in purchasing power of the greenback, caused by the comeback of inflation.

History shows us that realizations like this often come as a surprise, but just as frequently they occur in a rapid and definitive way.

Some countries, such as India and China, do not have the same confidence about the fiat money. That is why, in this highly inflationary climate, demand for gold and silver in these countries is very high.

China's gold consumption surged 48.44% year-on-year to 813.59 tons during the first three quarters. This consumption is four times higher than the national production, with the country having to significantly increase its imports in order to meet the demand.

It must be said that the inflationary cycle is at a far more advanced stage over there; the rise in prices has already prompted a very marked economic slowdown, with:

Are we going to have to reach this level of slowdown in the United States and Europe in order to see the gold price finally take off?

On the charts, gold is cornered in a consolidation triangle whose lower support is currently being tested: 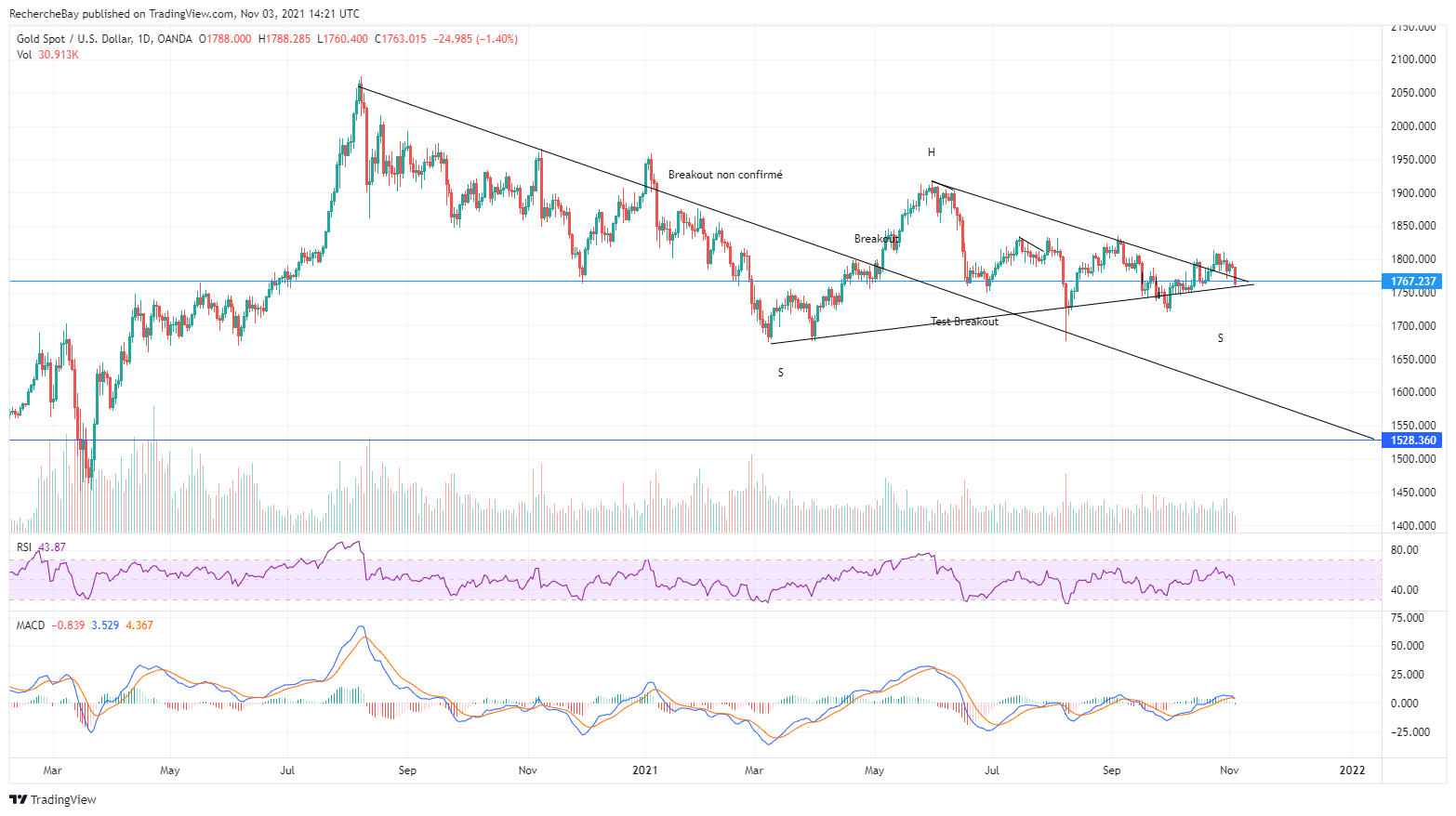 Silver, for its part, is approaching its consolidation support, and preparing to test this support: 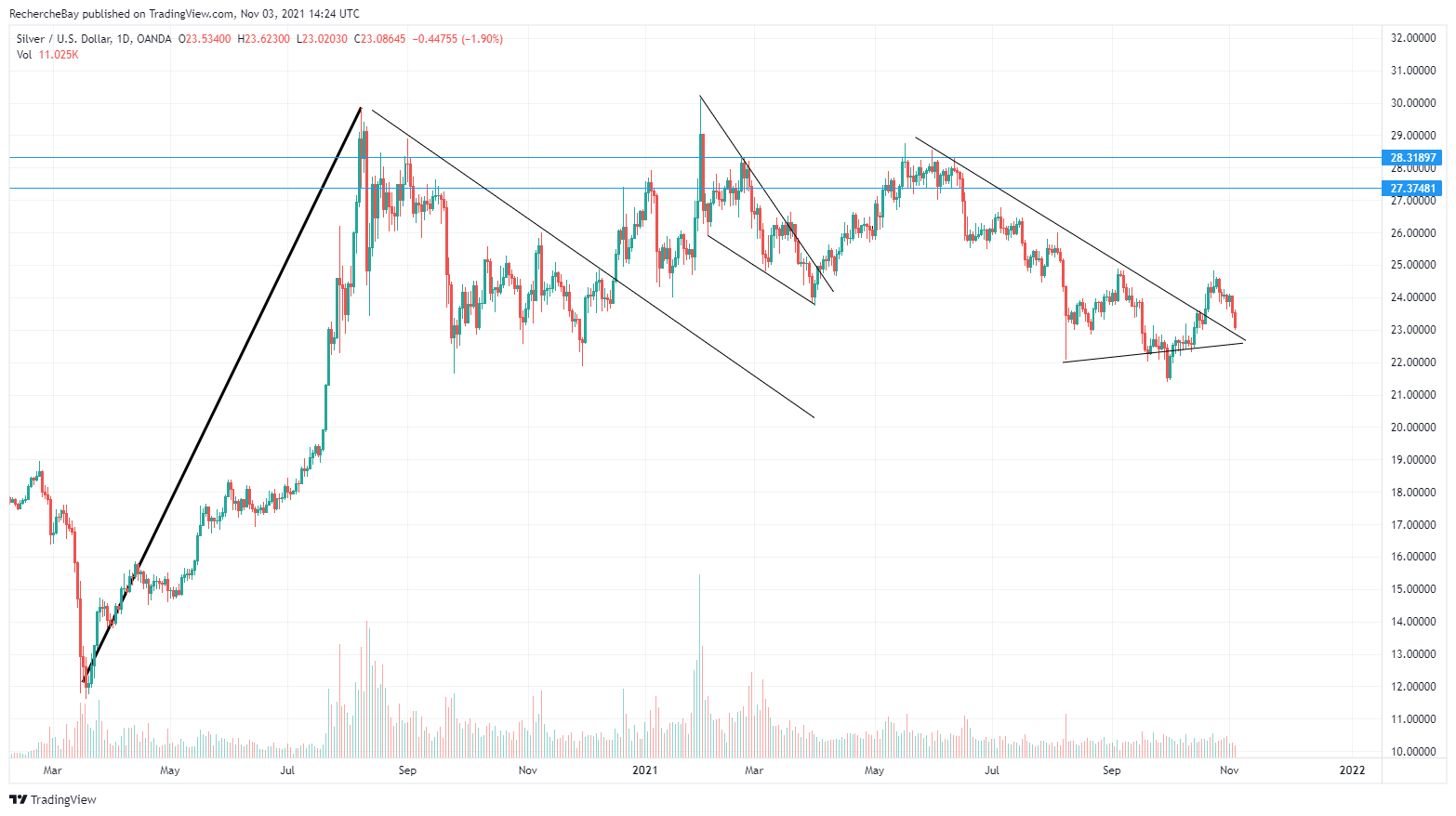 The purchasing of gold as a form of hedging is far from being uppermost in people’s minds in the West. The U.S. fiscal and monetary policies are prompting a rise in expenditure. The ETF XLY index, which measures U.S. consumption, is on the upward part of a parabolic trajectory. 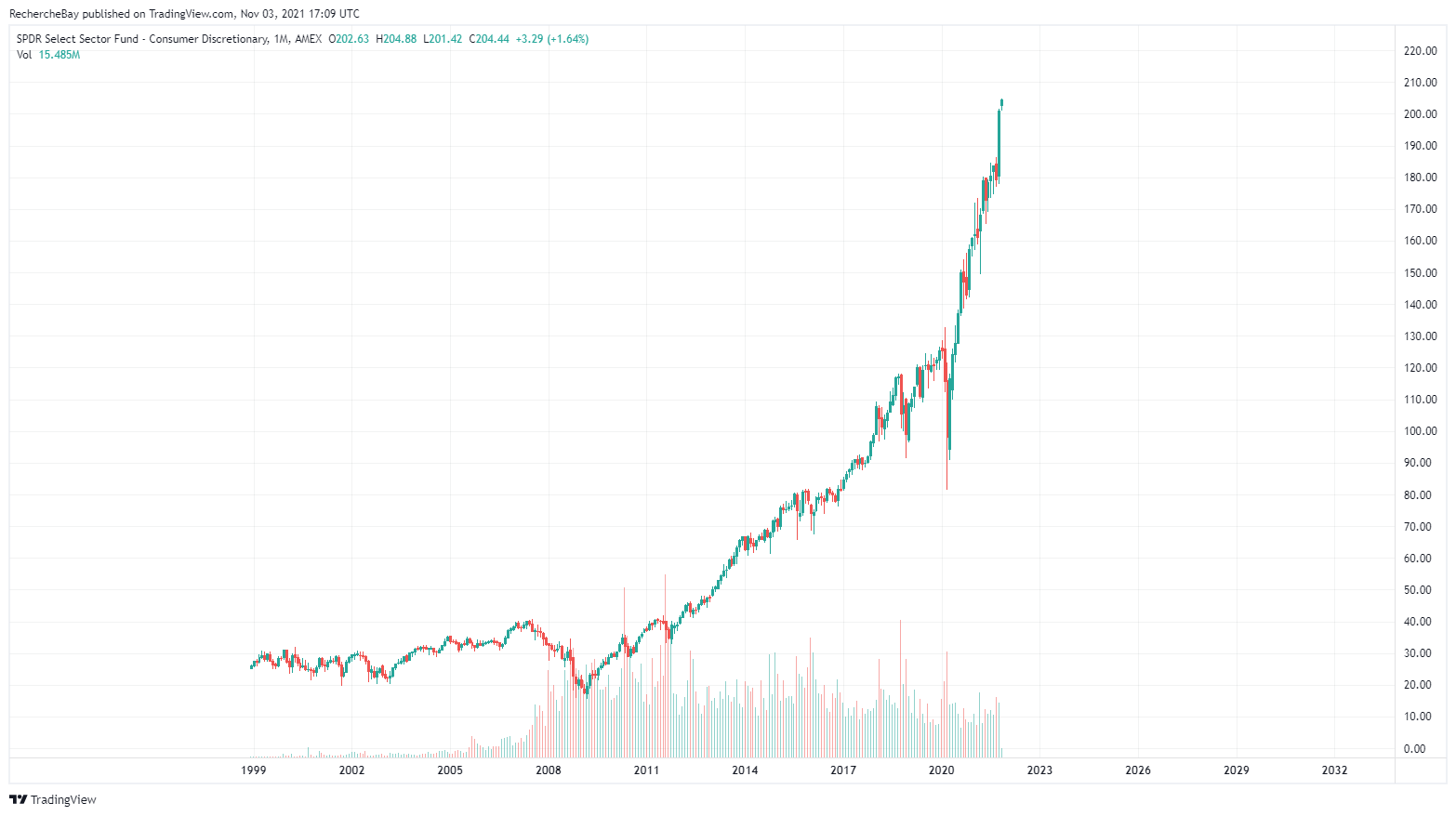 This rise in household expenditure is being accompanied by a rise in industrial orders in the United States...and this frenzy, in turn, is fueling inflation. The more expensive something is, the more orders are placed for it...until stocks run out completely! 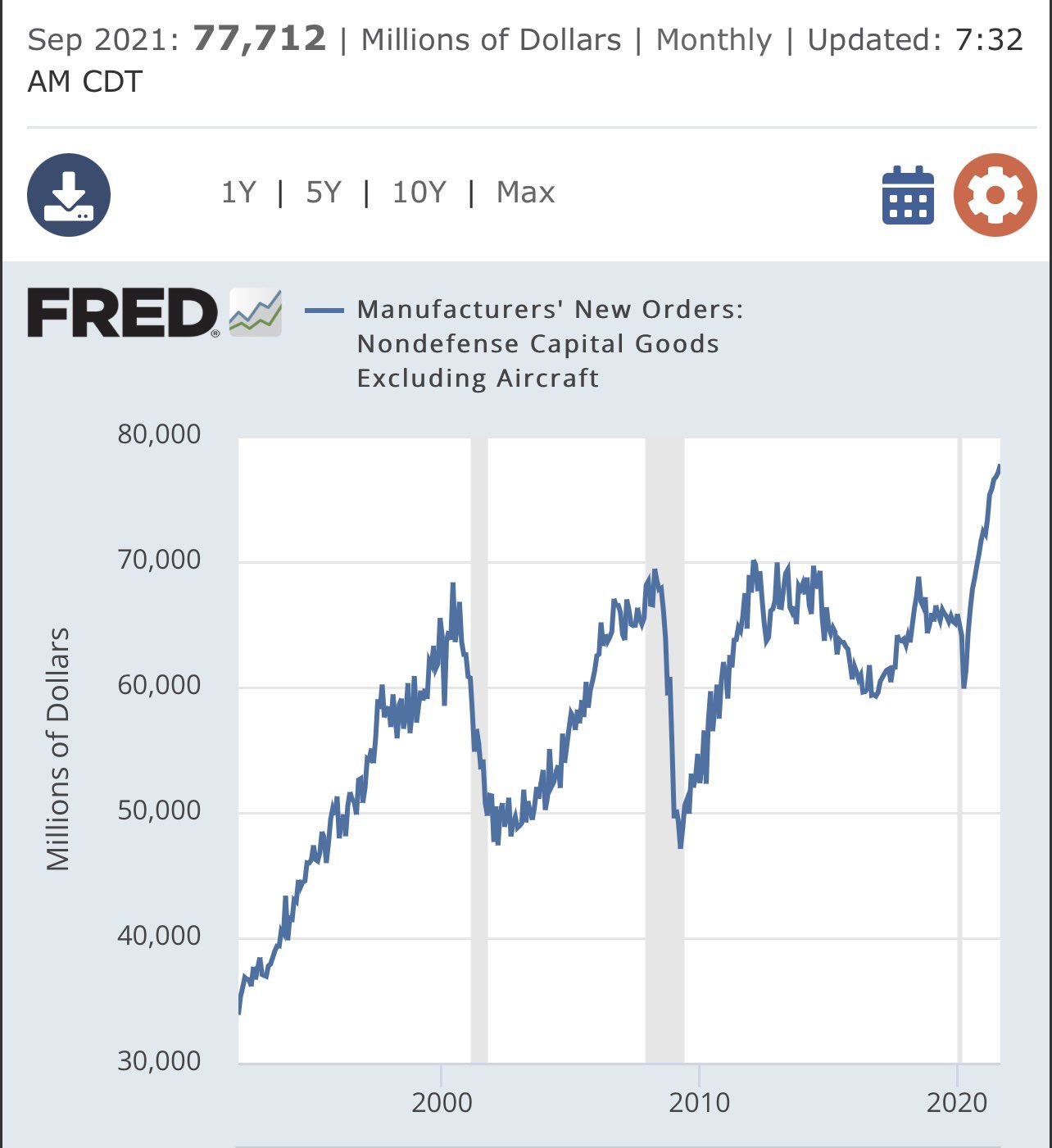 This rise in spending is having a particularly strong impact on the services sector. The ISM is at its highest since 1997. The cash that is available, the Covid crisis and the conditions as regards the rates are leading to a hike in prices and in activity in this sector. 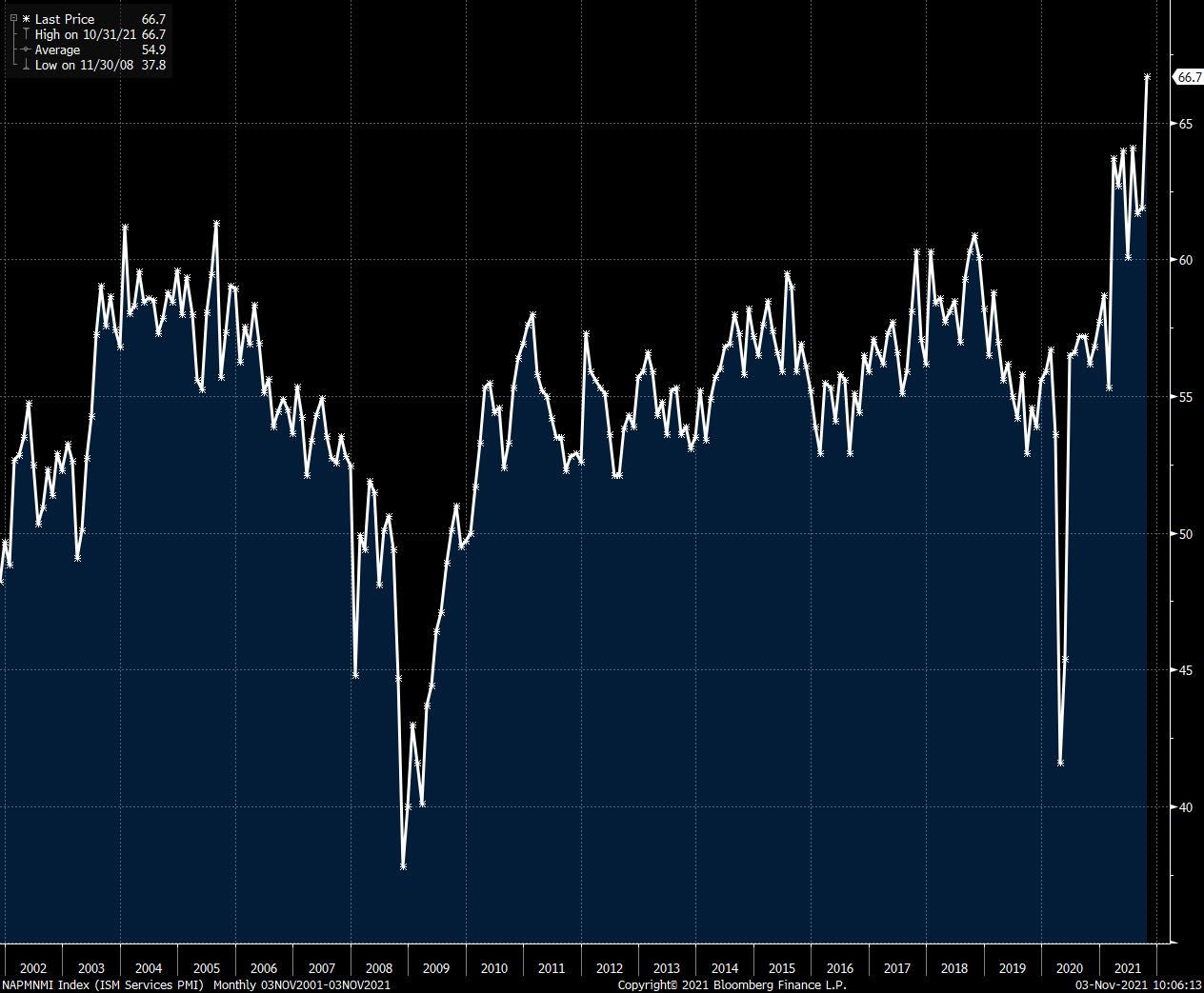 Physical gold and silver are the last assets not to have undergone a dramatic rise in recent months. A silver rush did indeed take place, but the sales on the COMEX have managed, thus far, to pass over in complete silence this real-life phenomenon of a rush on these metals. The problem? The stocks on the COMEX are melting away like snow on a sunny day. And even if the ‘paper’ sales are increasing more and more on the derivatives market, at the rate at which the stocks are diminishing, it is highly likely that a violent return to reality as regards the prices is happening, rather like what we saw with copper recently. This is even more true in the case of silver, where we are seeing the dwindling of stocks accelerate with each passing day:

With the sheer quantity of cash accumulated in bank accounts in Western countries, the disruption to supply chains and the melting of the stocks in the futures markets (the last ‘tools’ that are putting the brakes on the rise in precious metals), the virus of physical gold and silver will likely spread from China to the Western countries...as and when the economic difficulties catch up with us. This new rush risks taking off in the midst of a crisis of confidence in the central banks: it is when people realize that the banks will not be able to get us out of the impasse into which they have led us that the confidence in fiat money will evaporate. It is in precisely such periods that gold and silver outperform all the other assets.

The behavior of the mining stocks indicates to us that this period is perhaps closer than we think. The weekly GDX/GLD chart is in a bounce-back phase, after a successful test of support. If this chart is correct, the mining stocks are ready to outperform metal in a new bullish cycle for the precious metals. 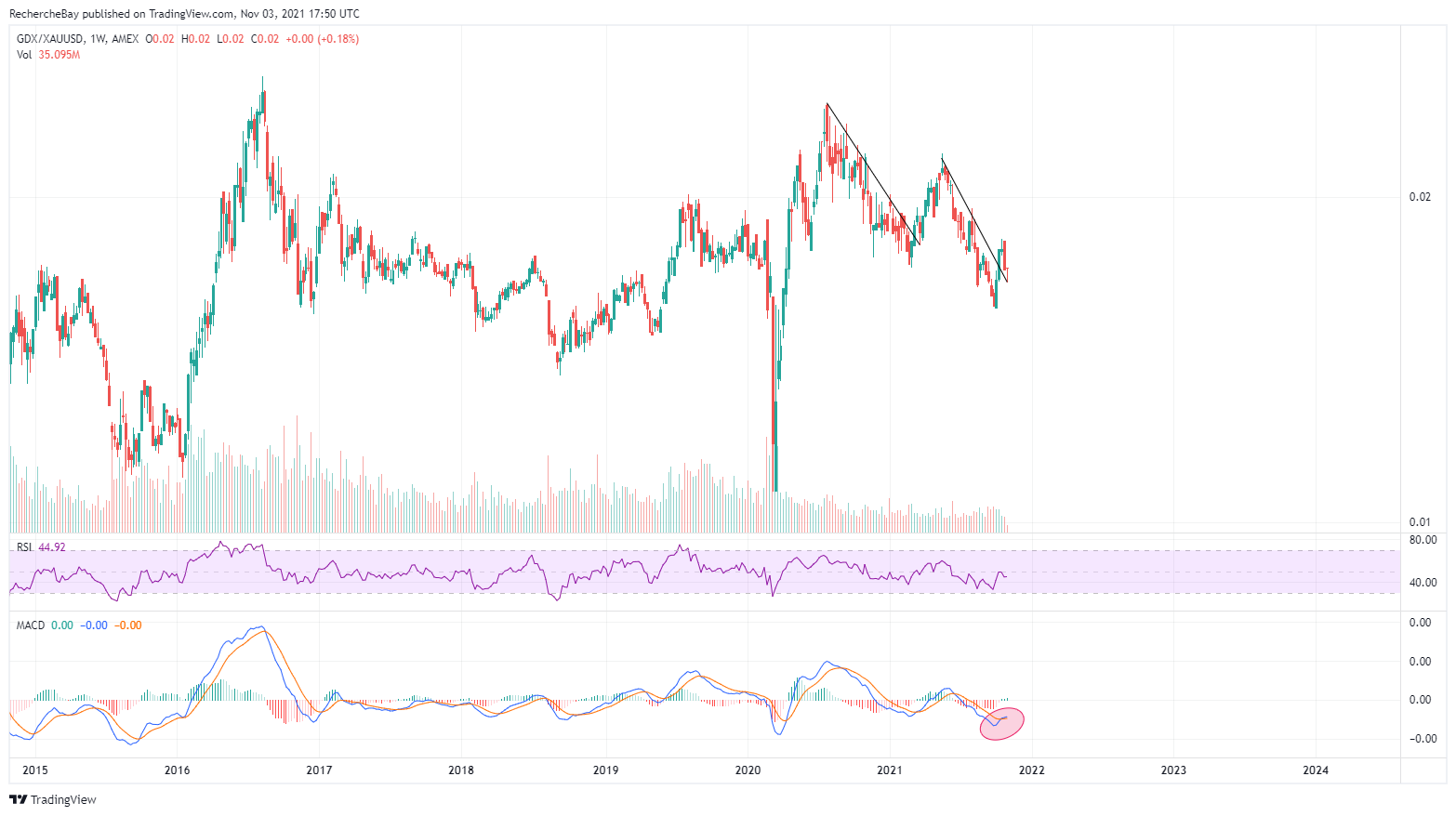