This week, gold in yen is breaking its historical record. Japanese who invested in physical gold in 2008 tripled their savings. The price of gold has doubled in just three years in Japan! 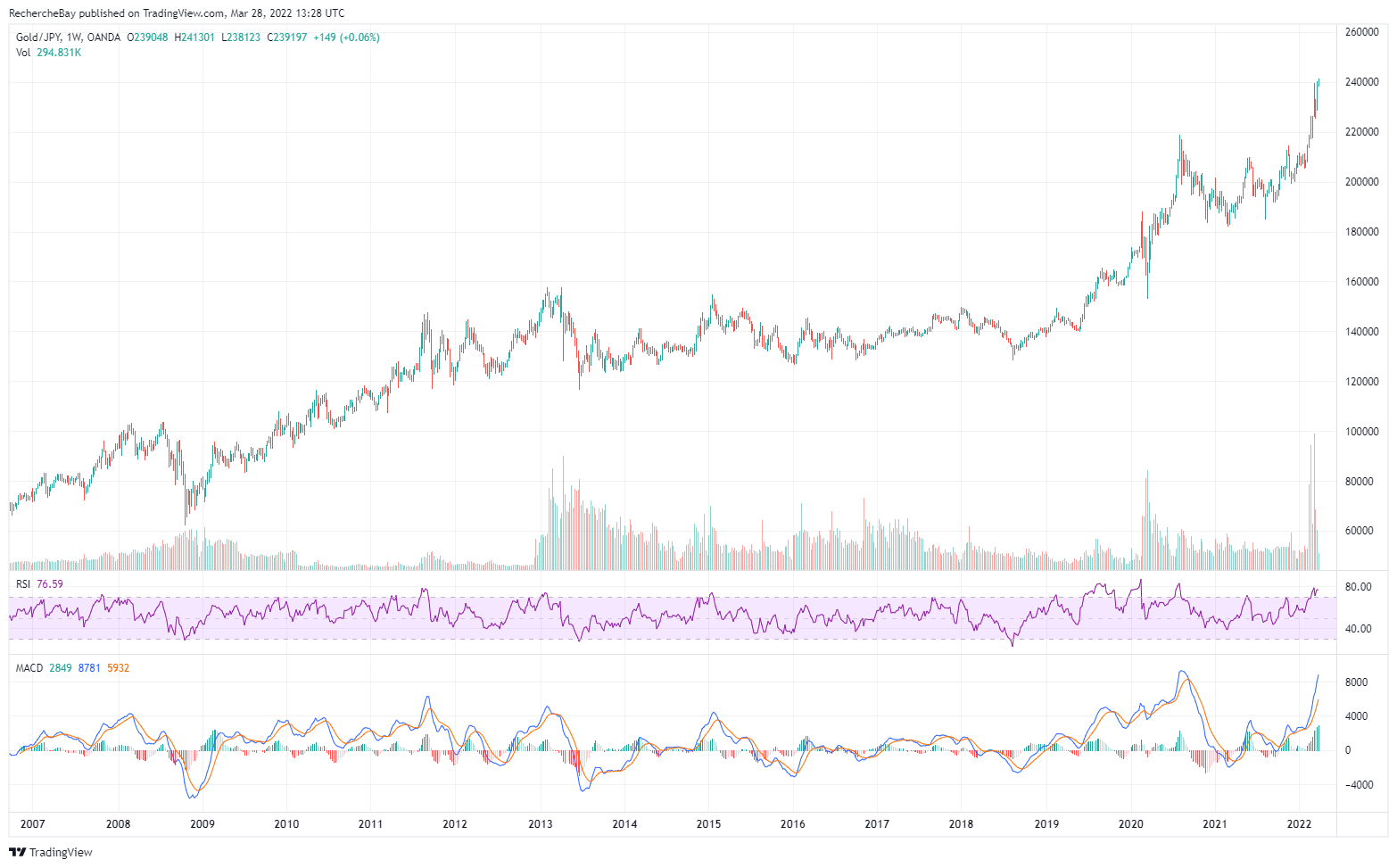 Between 2011 and 2020, gold and the yen were perfectly correlated: the charts of the JPYUSD and gold indexes were juxtaposed for eight years, but since the beginning of 2020, the correlation of the two indexes has abruptly stopped: 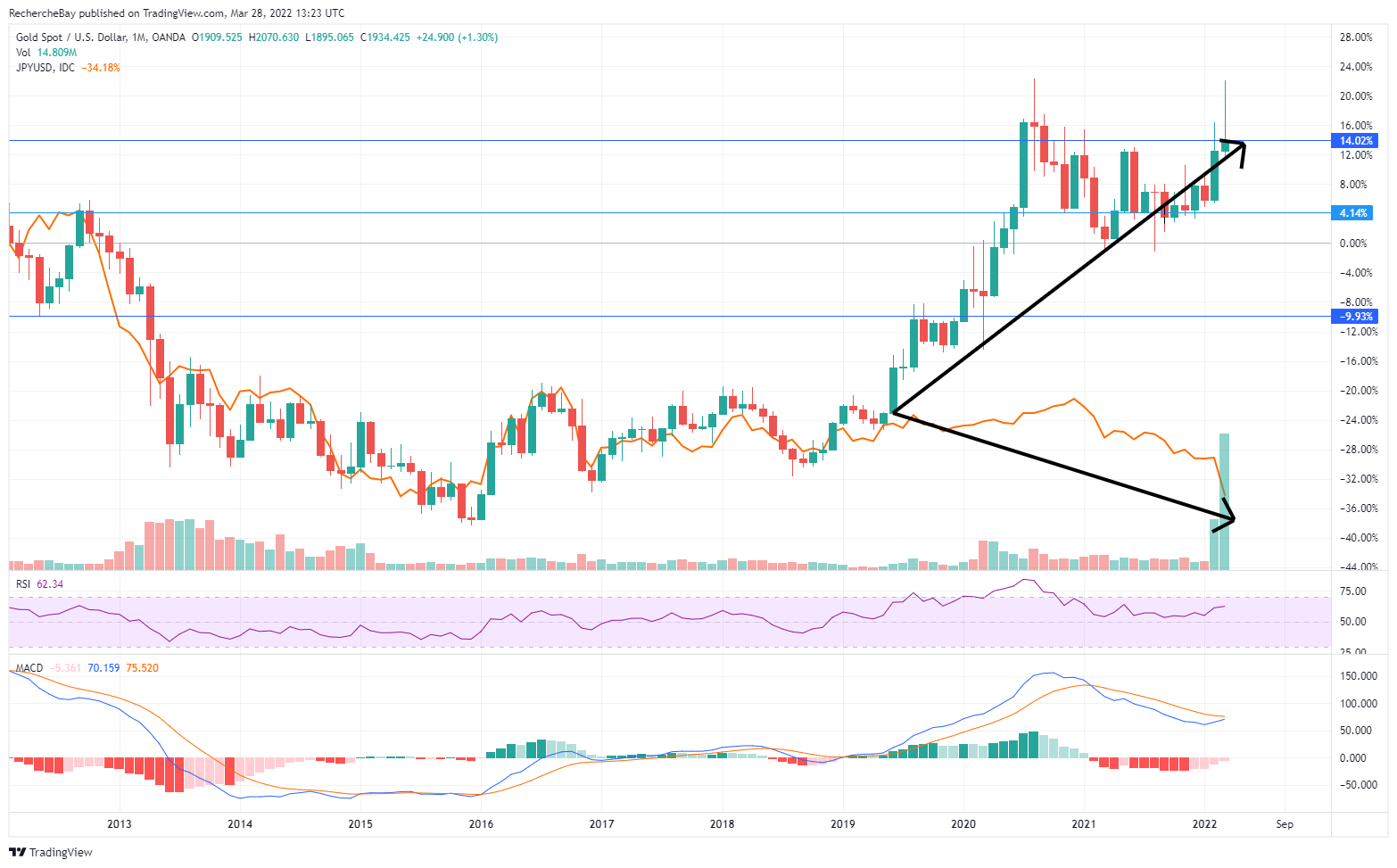 The stall of the Japanese currency is even clearer during the latest gold consolidation: 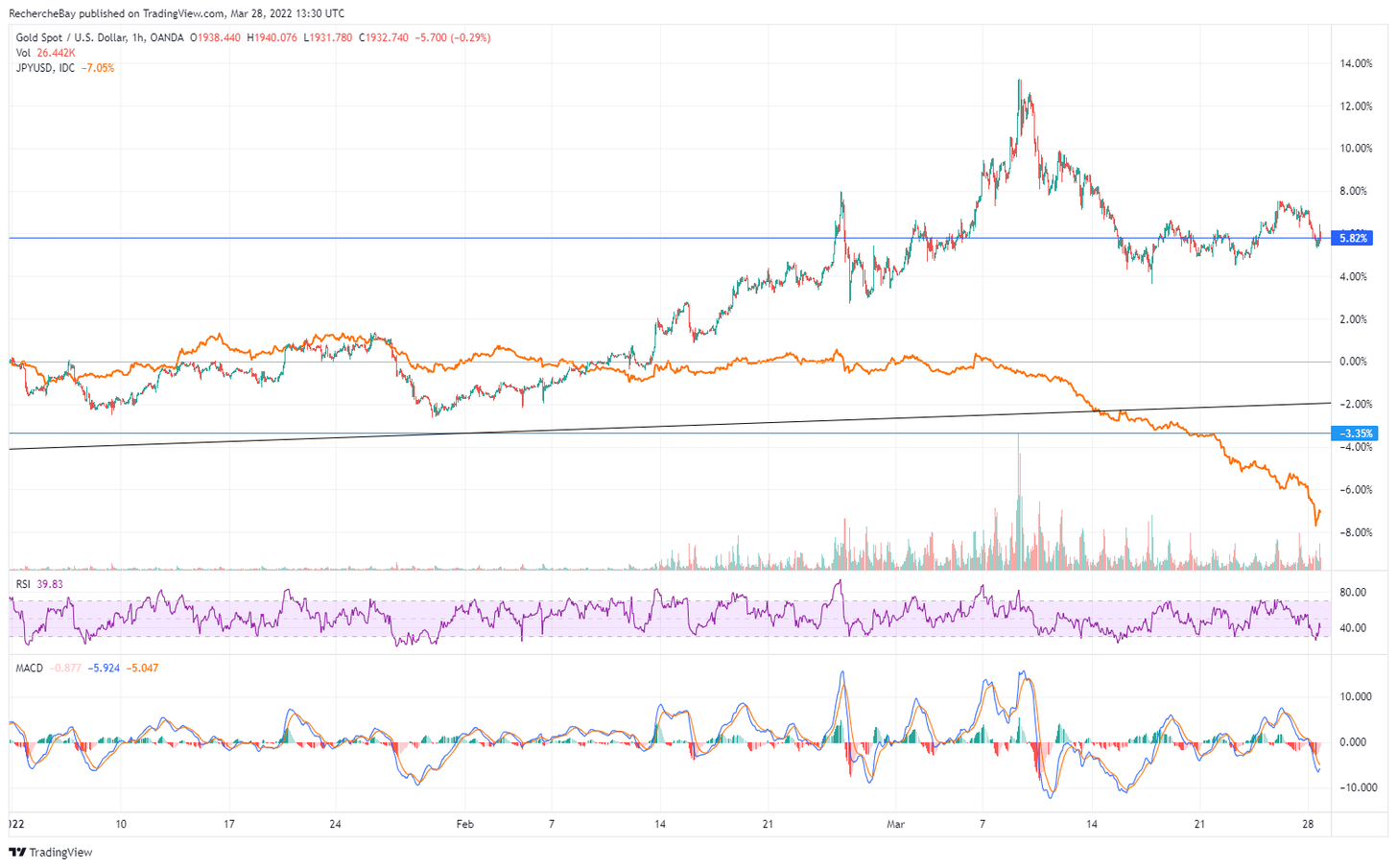 The significant rise of gold in yen signals a monetary event and underlines the impasse in which the Japanese central bank now finds itself.

While all bond rates are rising sharply at the global level, Japanese rates are not immune to this surge. The ten year old is back to 0.25%, and this is obviously already too much for the BoJ governor. Haruhiko Kuroda intervened at the beginning of the week to defend the bond market by relaunching a new asset purchase program. The Japanese central bank is now ready to intervene in the markets and buy an unlimited amount of ten-year bonds at a base rate of 0.25%. In other words, the BoJ is determined, no matter what the cost to the Japanese currency, to put the brakes on rising interest rates in Japan. The balance of the central bank is likely to soar again. It is the Japanese currency that is paying the price for keeping rates down. Monday's intervention pushed the yen to a six-year low against the dollar. 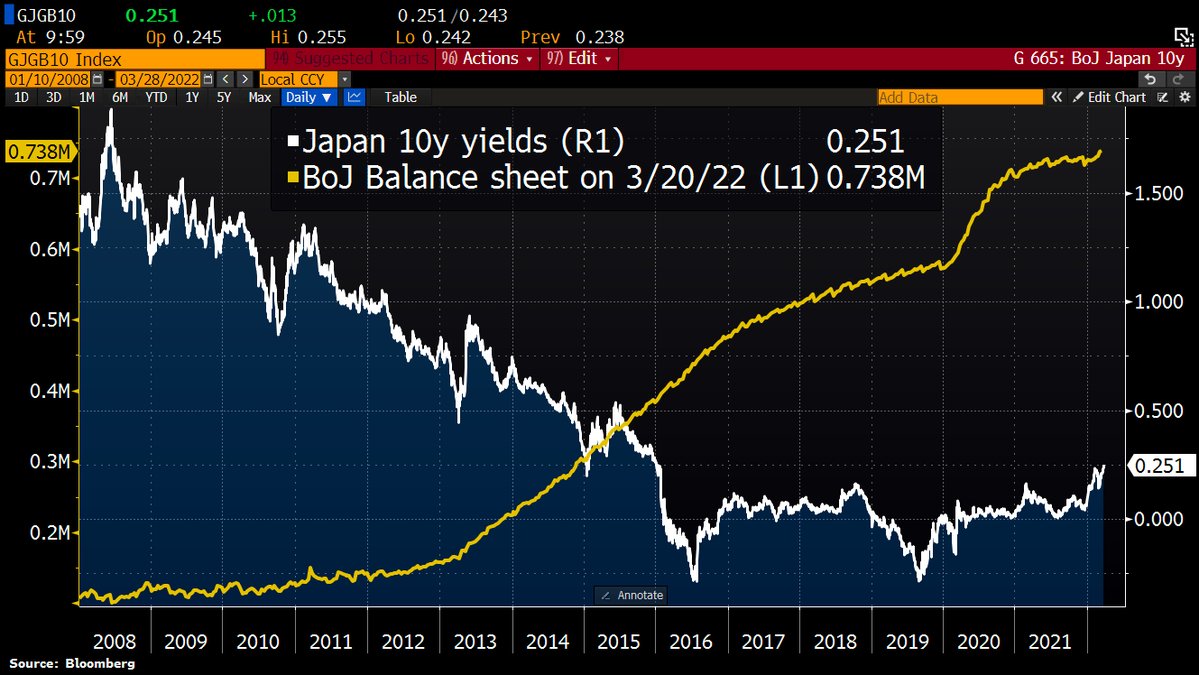 Seeing gold react by reaching historic levels makes perfect sense. It is a direct consequence of this monetary policy.

The Japanese central bank is the first to crack. Historically, it is also the one that started its quantitative easing program the earliest.

At the beginning of this year, losses in the bond compartment are already significant, but it is above all the volatility of the sector that is soaring. The MOVE index, which measures volatility in the US bond sector, has exceeded its peak reached in 2020 during the Covid crisis: 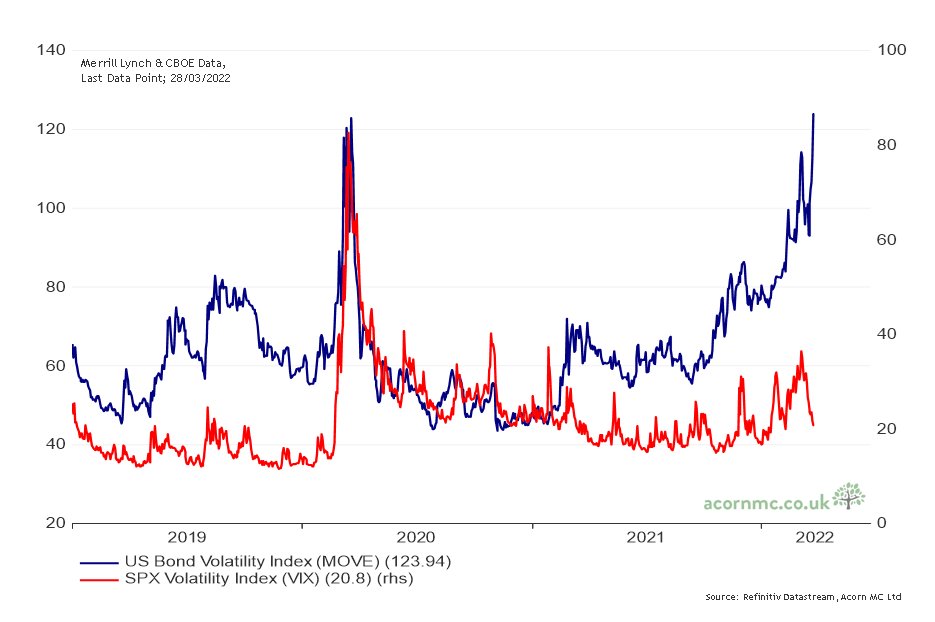 This increase in US rates comes from the fact that the market is now anticipating a sudden increase in interest rates from the Fed, while the institution must urgently face a rise in inflation not seen since the Second World War.

Inflation expectations are pushing short rates even higher and we are even seeing a reversal between 5-year and 30-year rates at the beginning of this week. The last time this happened was in 2006, and some economists see it as a sign of an emerging recession. At that time, the Fed had hardly nationalized the bond market and inflationary expectations were not comparable. It is probably for these distinct elements that the debate is so engaged between two camps of forecasters. Some see this inversion of the yield curve as a signal of impending recession. Others argue, on the contrary, that the Fed's excessive liquidity and support will kick-start a reflationary cycle encouraged by an accelerated restocking phase, even with high inflation, which will be offset by intense economic activity.

This difference between the "bull" and "bear" camps is generating volatility in the equity markets.

On the other hand, both camps have come to agree that inflation is now well established and poses a threat to growth if it gets out of hand.

The inflation felt on the ground is even higher than the official price increase figures portray.

Rents have risen by 17% in the US over the past year. Over the same period, home prices rose 19%. Yet, according to the administration, housing costs rose by 4.3%. One wonders how they come up with that number. With correct data, one can imagine that the latest inflation figure would have been well over 10%!

Inflation, already strongly propelled by the artificial stimulation of demand in times of health crisis, is now maintained by a reduction in supply due to the confinements in China, but also the conflict between Russia and Ukraine.

This reduction in supply particularly concerns oil. The last oil shock, and the inflation it caused, took place in a context of large oil reserves. Underinvestment in exploration and new decarbonization policies now put us in a much more delicate situation. Inflation is taking place this time in a context of insufficient reserves. Demand is much higher than available supply. 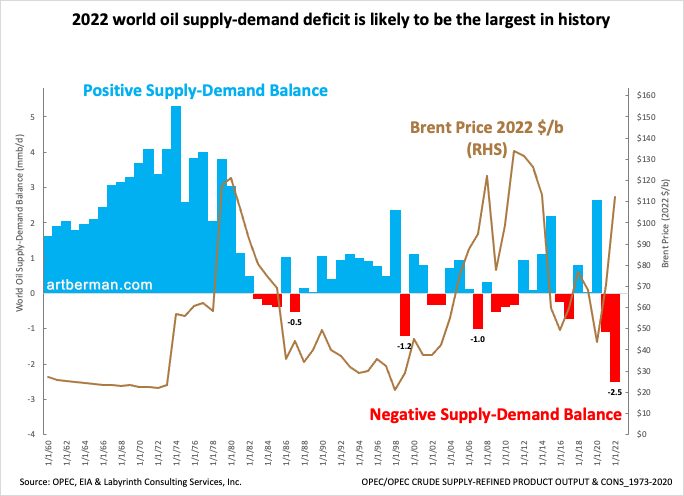 This oil shortage is not the consequence of the war in Ukraine.

Contrary to what the sanctions suggested, the war has not stopped Russian oil deliveries significantly: 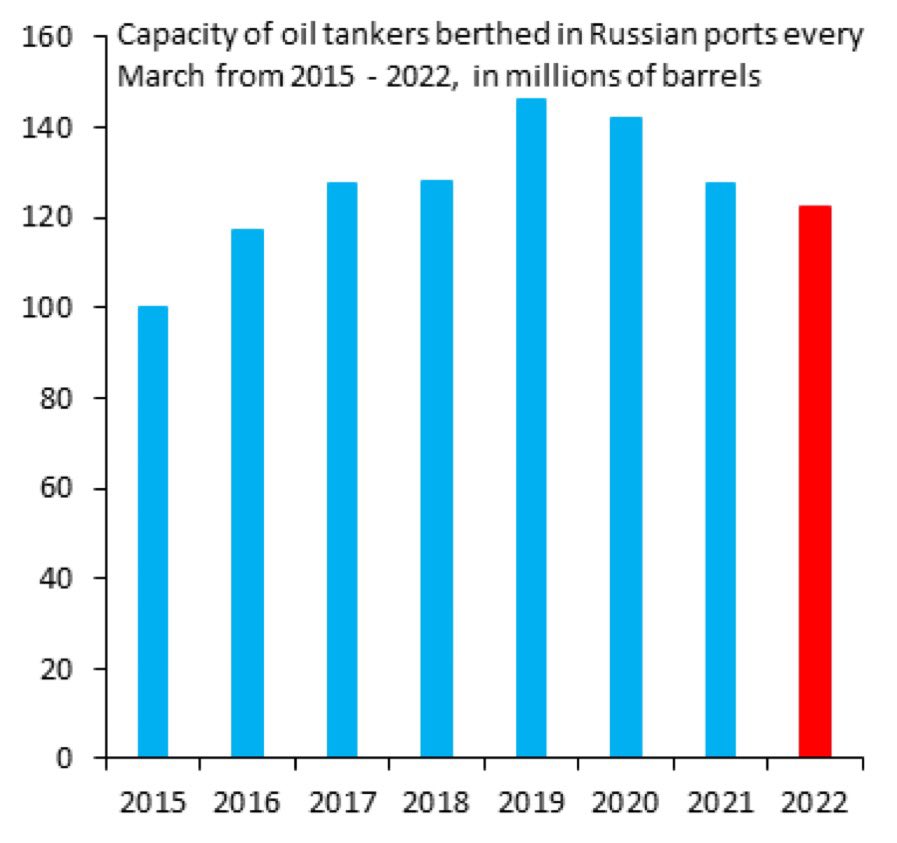 A total embargo on Russian oil would not help matters. But whatever the outcome of the current conflict, the oil shock that we are about to experience is likely to be much more sensitive for our economies, which are still heavily dependent on this energy source.

To avoid the social tensions caused by these increases, the European and American governments have decided to help taxpayers by lowering taxes on oil products or by distributing energy vouchers. While in the short term, these measures may help to calm social discontent, they only serve to consolidate demand in the face of dwindling supply. The price of oil is not about to fall under these conditions... public deficits will increase further, pushing central banks to monetize more debts, and there too, inflation is not about to fall! At the end of 2021, most economists were predicting a peak in inflation, and even if we "tweak" the official figures, we can see that the CPI index has accelerated its rise: 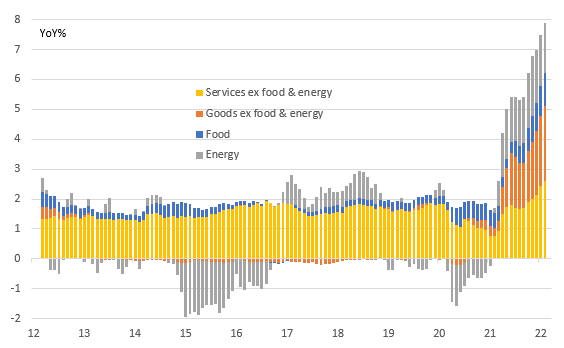 Inflation is on the rise again in all sectors of the economy. Steel prices, which had fallen at the beginning of the year, are now rising sharply.

Steel rebar prices have reached record levels in Europe, which poses a short-term problem for the entire construction sector: 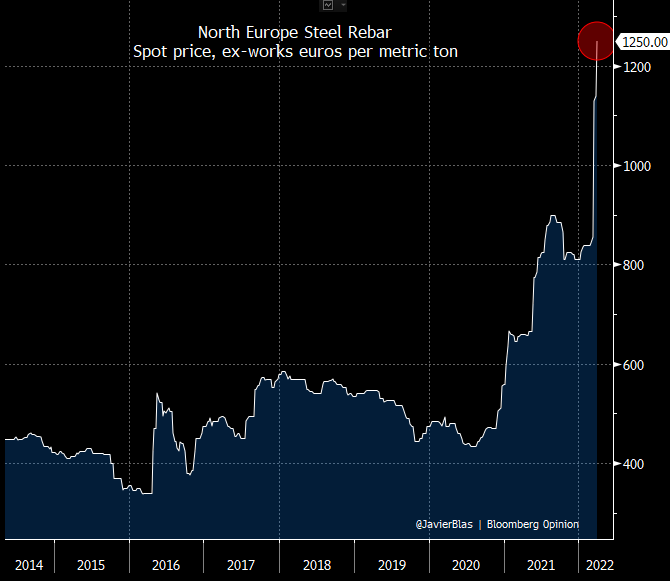 In the agricultural sector, it is rapeseed that is soaring this week to historic highs: 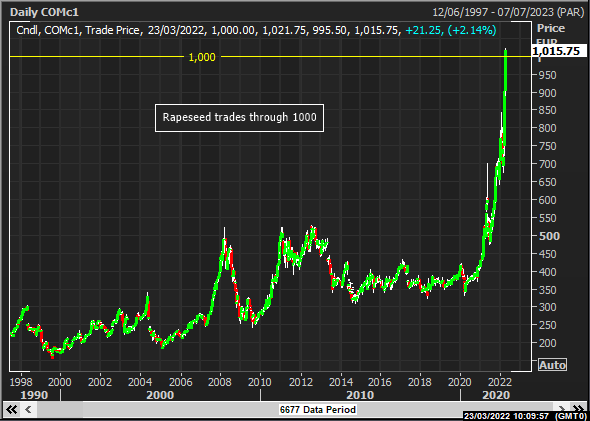 Fertilizer prices are rising sharply again this week, which will logically lead to a drop in grain production in the coming months. This is an additional element to take into account in the forecast of food shortages caused by the stop of Russian and Ukrainian agricultural exports.

The food price index is already at an all-time high: 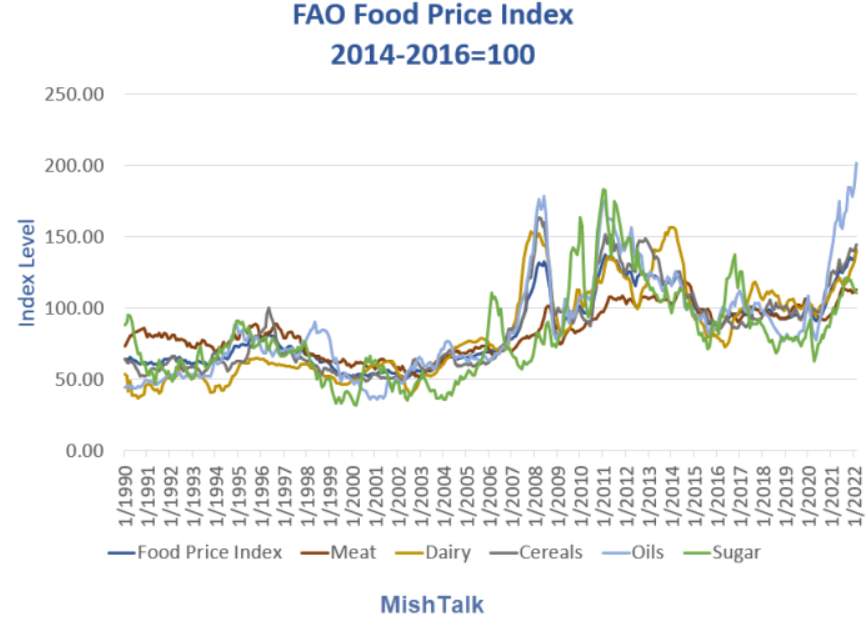 Even if this is not the path chosen by the Japanese central bank, more and more observers believe that the fight against inflation must be a top priority in order to avoid the predicted disasters of war and famine to which these periods of inflation logically lead.