The US Mint sold the equivalent of 16.4 tons of gold bullion and coins in a single quarter this year. A record since 1999. 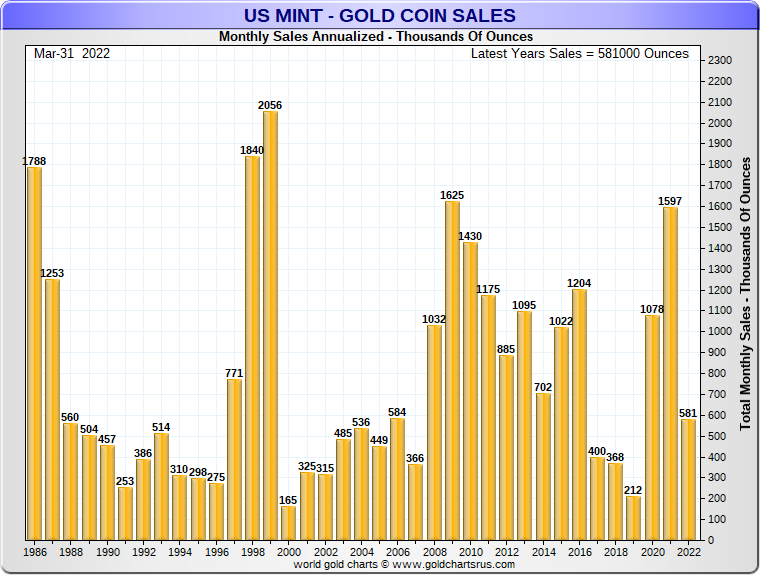 Twenty-three years ago, gold was priced at only $275 per ounce. Today, physical demand is at the same level, while the price of gold has increased sevenfold! 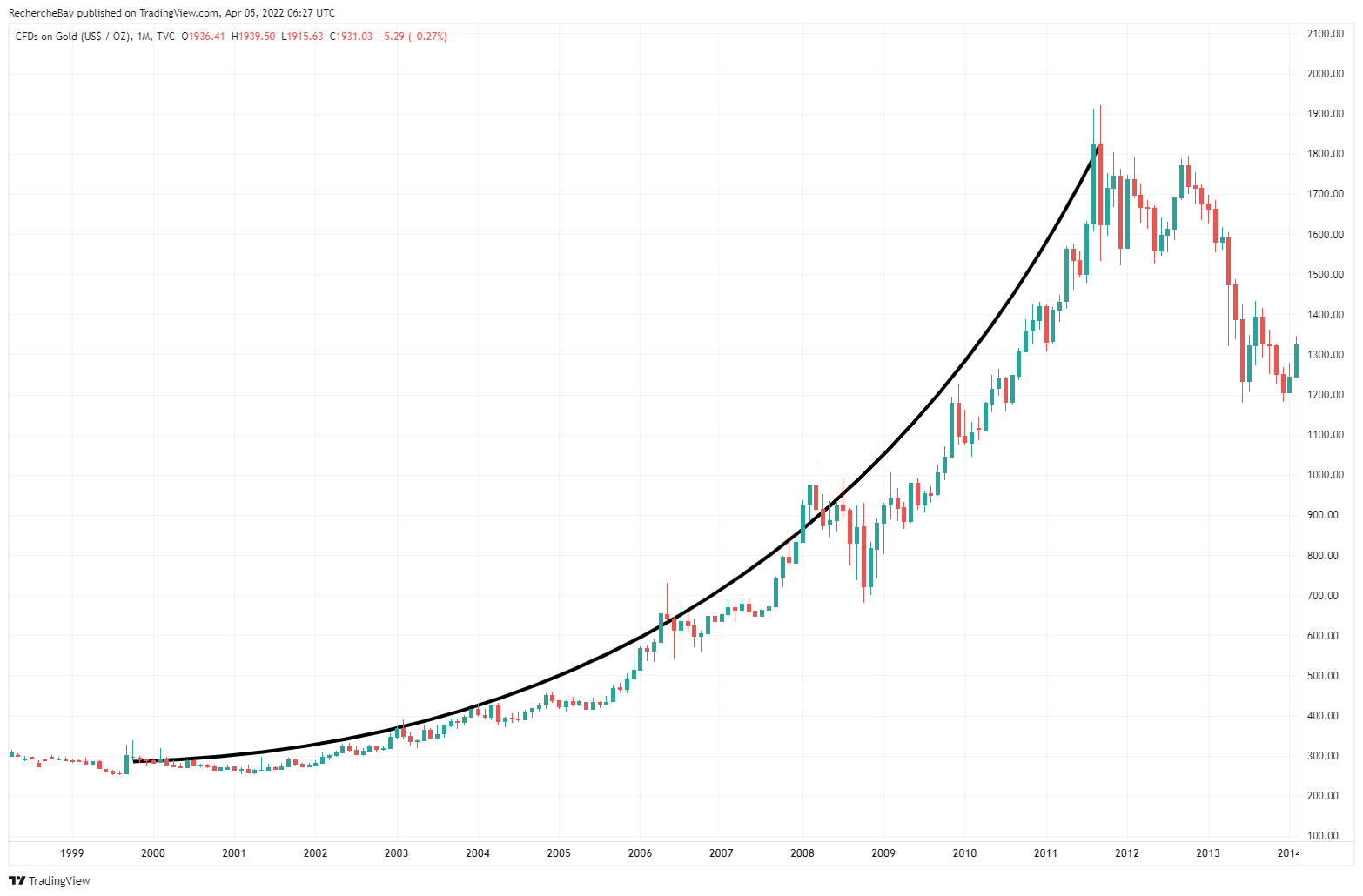 We have forgotten about this bullish phase today, because gold has not risen in the last ten years, and has therefore underperformed other assets such as real estate, bonds or the stock market.

But those who followed gold in 1999 remember very well that these purchases of physical gold coincided with the beginning of the bursting of the Internet bubble. This signal of physical gold buying in the United States launched the great bull market in gold between 2000 and 2010.

In 2022, this increase in physical gold purchases is taking place against the backdrop of a stronger-than-expected economic recovery in the United States. After reaching 56 in February, the Chicago PMI manufacturing index accelerated to 62.9 in March, up from the expected 57. U.S. manufacturing activity accelerated upward in March. Americans are spending more and more, which is helping local industry. This can be seen in the tourism business: Carnival recorded a record 55 consecutive cruises last week, most of them between Miami and the Caribbean, a sign of an explosive recovery in this sector. The relocation of activity even seems to be accelerating, even if problems are still affecting the supply chain. Waiting times at U.S. ports are finally starting to decrease. However, delays are now increasing on the Chinese side, as the Shanghai region is in chaos due to the health crisis.

Three hundred ships are currently waiting to be loaded or unloaded at the port of Shanghai: 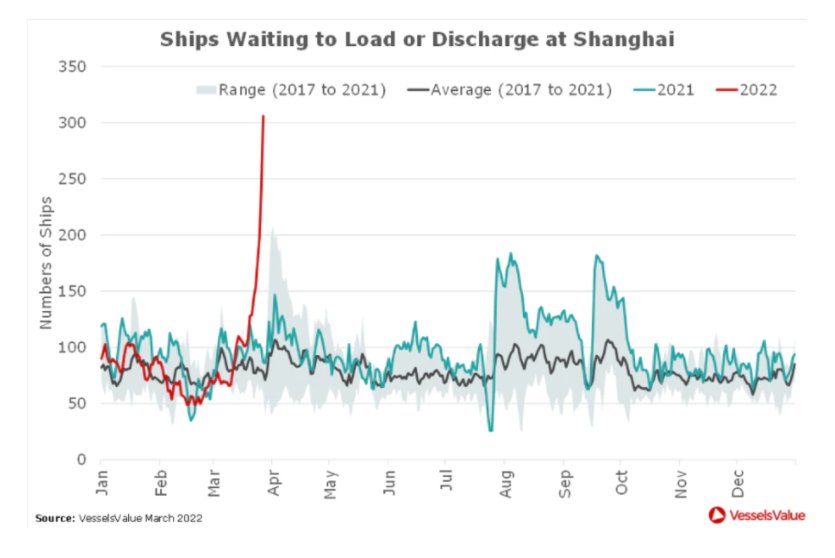 These recurring supply problems are beginning to have an impact on the level of demand.

This is logical: more and more manufacturers are finding alternative local supply solutions. This phenomenon is gradually leading to a destruction of the demand for maritime transport.

The price of ocean freight is falling in this month of March 2022, signaling a slowdown in demand: 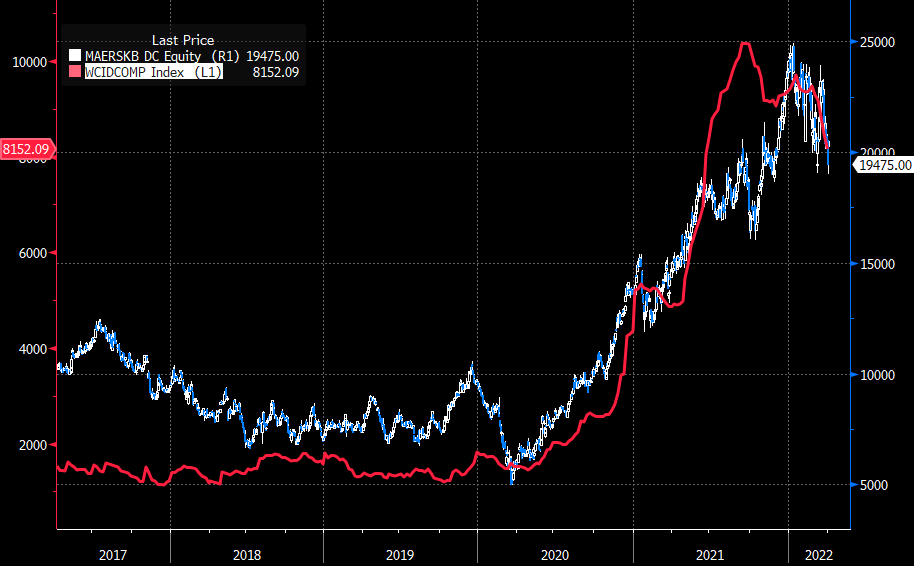 Logically, this slowdown also corresponds to a fall in Chinese manufacturing activity. The sector most affected is real estate construction: sales of the 100 largest Chinese developers have fallen by 52.7% compared to last year, according to the latest figures from CRIC.

This threat to Chinese activity is taking place in a real climate of economic warfare. For the moment, China does not seem determined to follow the economic sanctions imposed on the Russians by Western countries, which carries an additional risk on the level of trade with China.

This slowdown and the geopolitical tensions have undoubtedly caused investors to withdraw en masse from the Chinese market in recent days: 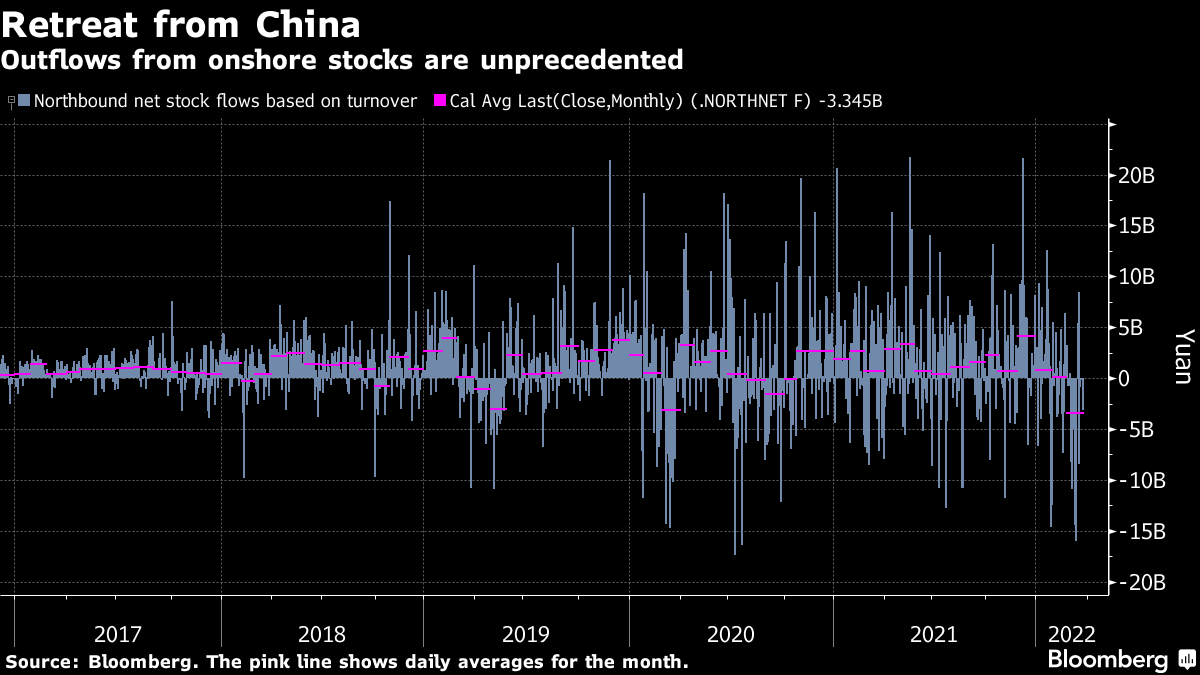 This de-globalization has a cost for China, which is measured in terms of manufacturing activity levels.

But the relocation of activity also has a cost in the United States. Under these conditions, the products consumed are inevitably more expensive.

Inflation in the U.S. is accelerating at the beginning of this year.

The latest figures from the PCE index confirm that inflation has now spread to all parts of the U.S. economy:

While the numbers in this PCE index suggested a spike, the acceleration since December is cause for concern: 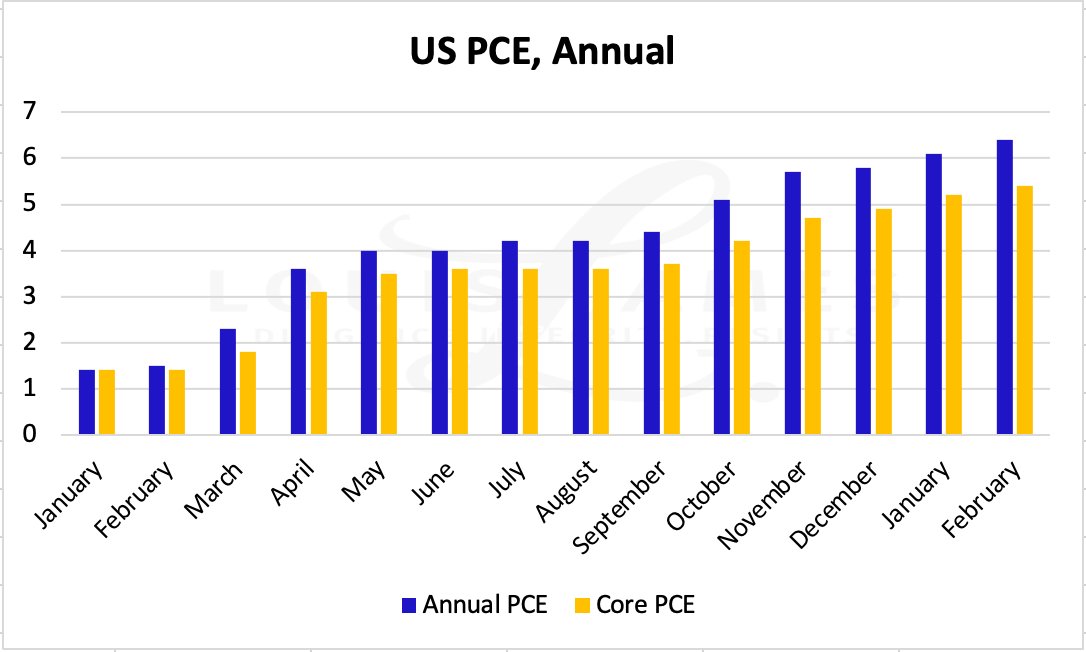 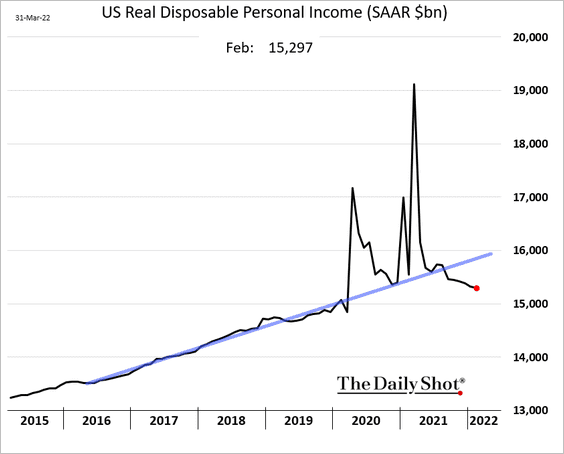 This threat to consumption is probably motivating the Fed to act strongly and quickly on interest rates. The market is anticipating a rapid rise in interest rates, and even before the Fed takes concrete action on this increase, expectations of a rise have already caused US mortgage rates to soar. This sudden shock is likely to completely dry up the demand for loans from first-time buyers in the United States: 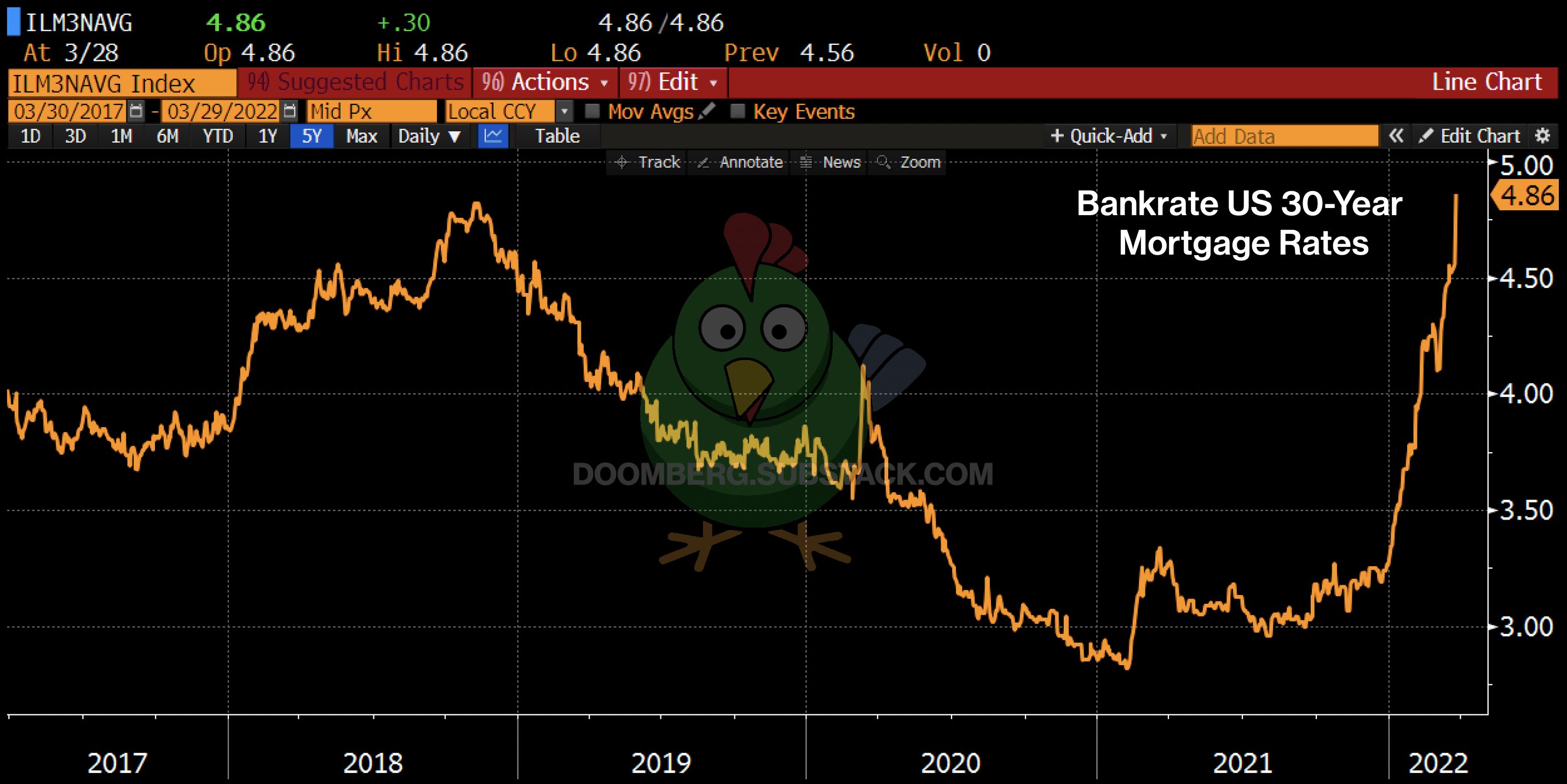 As a result of this sudden rise in rates, the gap between the cost of acquiring and renting is widening again, at an even greater rate than during the bursting of the real estate bubble in 2007. U.S. real estate sales are likely to take a plunge equivalent to that seen in 2007.

It is not just the housing sector that is experiencing this rapid decline in purchasing power.

The loss of real income is likely to be amplified by the sharp rise in energy costs, which has accelerated with the war in Ukraine.

The air transport sector will have to absorb a very sharp and previously unseen increase in the cost of kerosene. 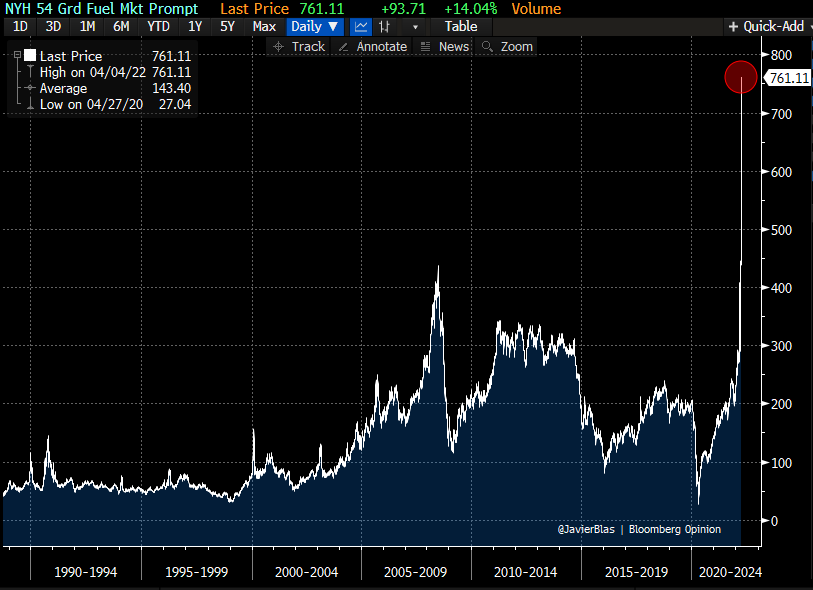 Under these conditions, the price of airline tickets will explode over the next few weeks, threatening the entire sector.

The Fed is in the worst possible situation: it will have to raise rates at a time when the inflationary shock could destroy demand.

Many observers believe that the fight against inflation and the raising of rates should have taken place as soon as the first signs of inflation appeared. Raising rates at a time when the inflationary shock is such that it is constraining demand is risky.

The Fed's "transitory" inflation forecast last year is now seen as a major policy mistake. Many managers trusted it blindly, and they are paying the price today. It is no wonder that confidence is now so low ...

Will the inflationary shock affect the level of demand? Will the Fed really have free rein to raise rates in the face of this shock? Isn't it already too late? The risk that the Fed will make another monetary policy mistake is weighing on the dollar. For without concrete action to fight inflation, the value of the US currency will pay the price of this failure.

Under these conditions, the dollar continues to fall as a share of the reserves of the world's central banks: 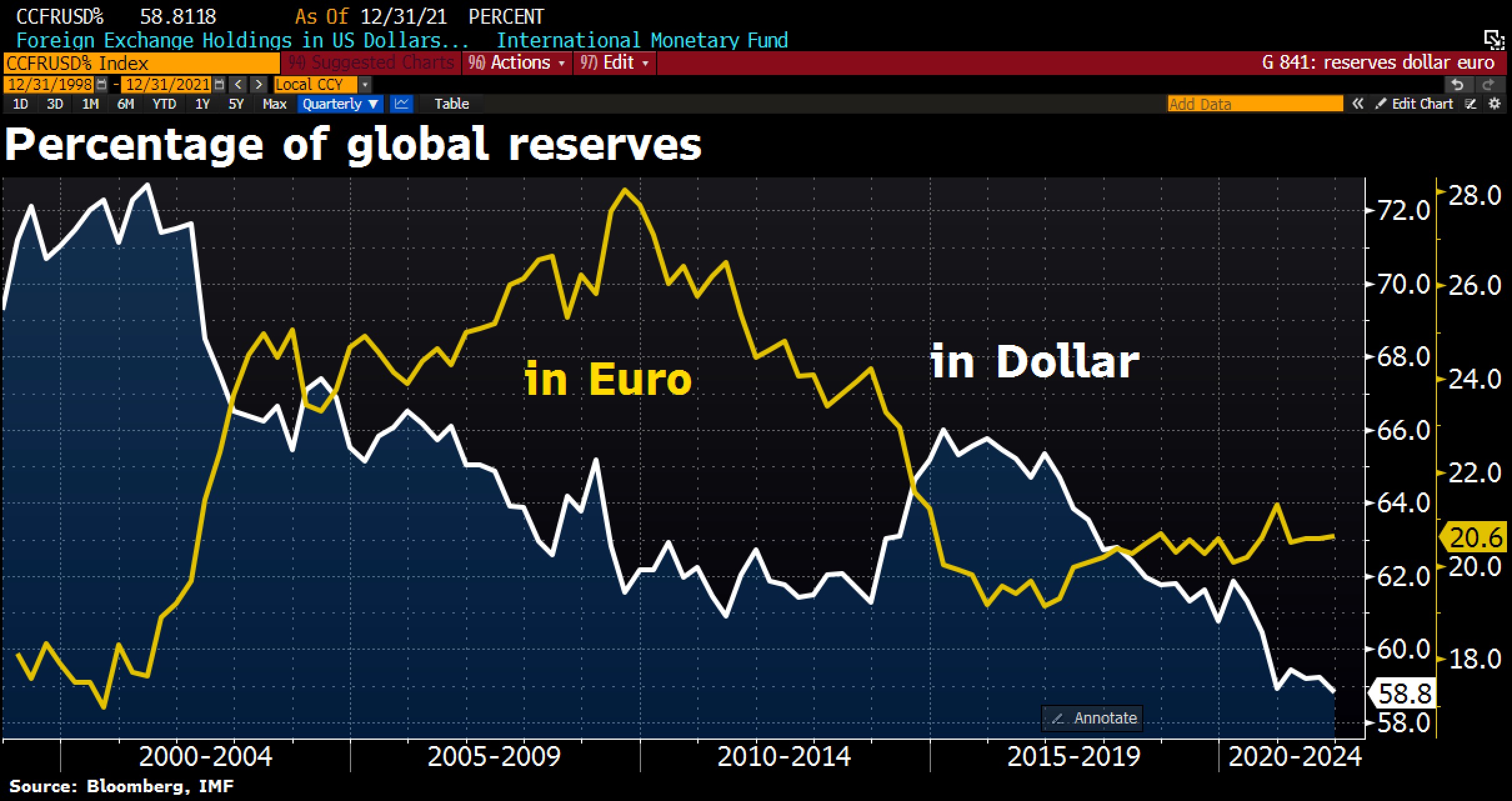 The war in Ukraine has reinforced this movement. Russia has decided, in response to the sanctions imposed by the West, to sell its raw materials only in rubles.

Recently, China, India and Saudi Arabia have also shown their willingness to partially do without the dollar in their trade.

This decline in demand for the US currency is taking place at a time when the risks of the Fed's failure to combat inflation are threatening the intrinsic value of the dollar.

The decline in the real value of the dollar does not benefit the euro: the energy crisis in Europe threatens to plunge the continent into a severe recession. Raising rates when activity is about to collapse would be suicidal for the ECB...

Gold is therefore likely to be the winner of this monetary devaluation. This is undoubtedly what American buyers of physical gold have understood at the beginning of the year.