Two weeks ago, we discussed the return of inflation to the United States by pointing out some price increase figures in commodities.

The latest figure measuring this inflation was very strong last Friday. The PPI, which measures price increases in the United States, is at an annual growth rate never seen before, since its inception. This was mainly due to the fact that, at the same time last year, we were in a strongly deflationary period. But, looking at this annual increase a little closer, we note that it is mainly the “goods” component, and not services, that explains this sharp rise. 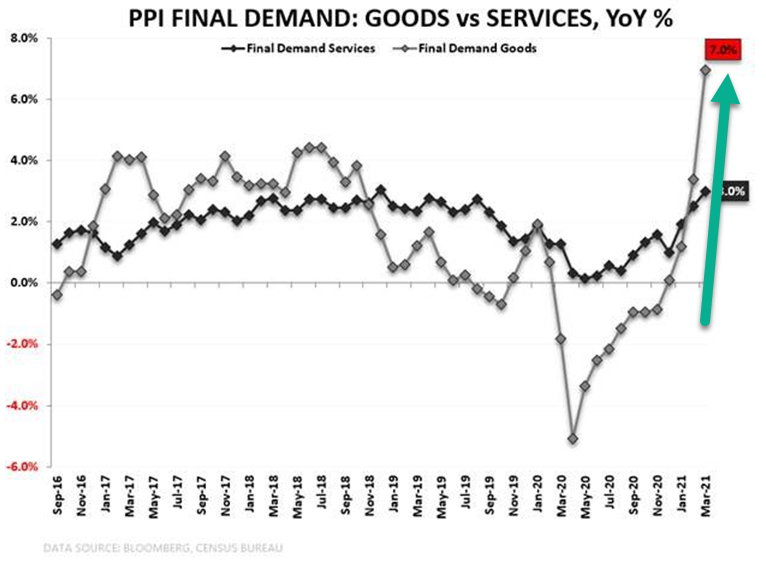 The PPI is now at a 9-year high and 5-year inflation expectations are also rising:

This last chart may seem innocuous, and supports the Fed’s statement on the “transitory nature” of this inflationary movement, but it is because of the Fed’s very accommodating policies that inflation expectations continue to rise.

The move has started, mainly because of what has already happened. It measures with a certain lag what has already been entered, with regard to monetary policy in the past. It is even more difficult to control, since it is a datum that is associated with inertia.

In fact, to stop this rise, the Fed must hike rates immediately.

It cannot, for one main reason, which we will explore. All it can do is to minimize the inflationary impact in its commentary, to continually repeat that it is transitory. 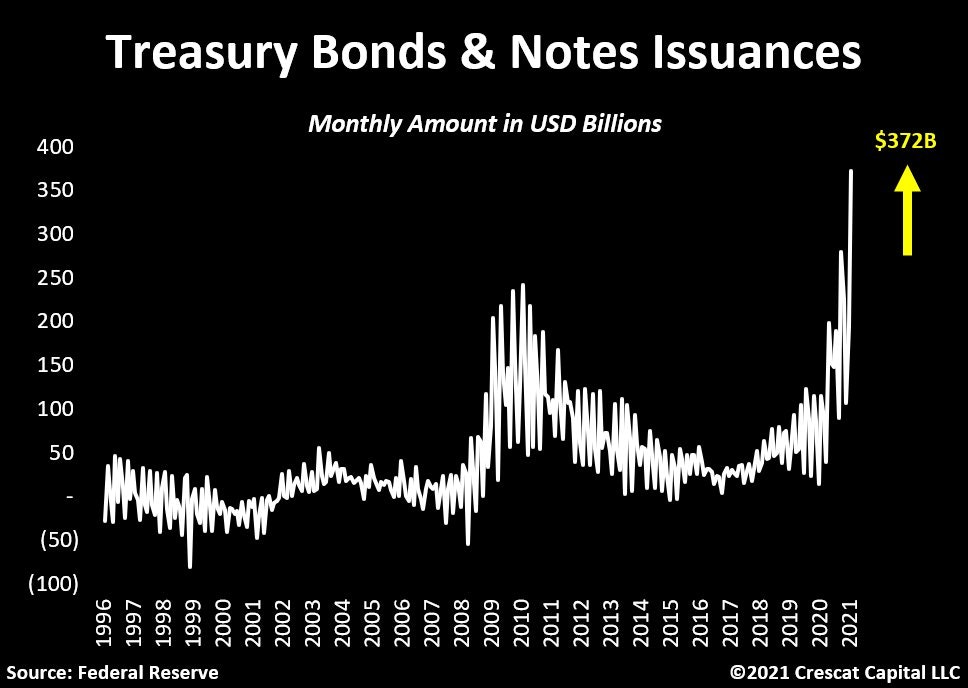 This has never been seen in recent history.

The Fed cannot hike rates because this will have an impact on the cost of this newly issued debt. The avalanche of Treasury bonds that arrives in the next few weeks must take place at the lowest rate possible. And, to have low rates, the Fed has no other means than to engage in even larger purchasing programs for these bonds. Without a buyer of this debt, rates will skyrocket, if the auction system is not properly balanced by these purchases by the central banks.

The Fed’s buyback program for these Treasury bonds will therefore be determinant in containing the natural market forces, which obviously encourage higher rates.

At the same time, in their discussions, the monetary authorities must minimize the inflationary effects produced by this rate manipulation and by these asset purchases.

But if controlling interest rates is a materially attainable objective (a priori, what prevents the Fed from purchasing all of the bonds issued by the Treasury?), inflation control is a much more delicate task.

Inflation now already has a real impact on economic activity in the United States.

The first effect is on wage levels. With the combined effect of the recovery and the distribution of free money to stimulate this recovery, the labor force participation rate is not keeping up with the recovery in job postings: job offers abound but candidates are not rushing to take up these offers! 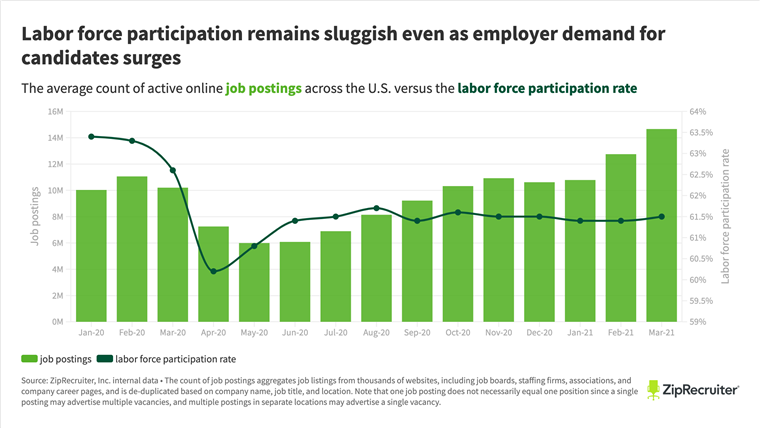 The testimonies I receive from my American friends all head in the same direction: it is more and more difficult to retain new hires, who will not hesitate to leave their job after a few days at the slightest constraint. Hiring incentives are popping up everywhere for waiter jobs and hourly wages are increasing significantly. From an economic point of view, it is really not a surprise to note that free money has an effect on wage increases... and if free money isn't enough, it's so easy to borrow at such low rates. Consumer credit is on the rise: Americans spent 27 billion on credit in February, 10 times more than expected (never has estimates for this figure been more wrong!), and this figure is a record since 2017. The U.S. government is going into debt to distribute money to its citizens, who are borrowing even more because it is still not enough. Do you think that this will not have an effect on the value of money?

It should be noted that this new consumerist trend now concerns the local retail sector. Online sales are slumping, no doubt due to the lassitude following the long lockdown.

The other consequence of this monetary inflation is felt in the price of commodities. This is also pretty logical: 1/5 of dollars existing today were printed during the last twelve months. The increase in the money supply leads to a devaluation of the currency. Today, the money supply is at a level not seen since the Second World War. 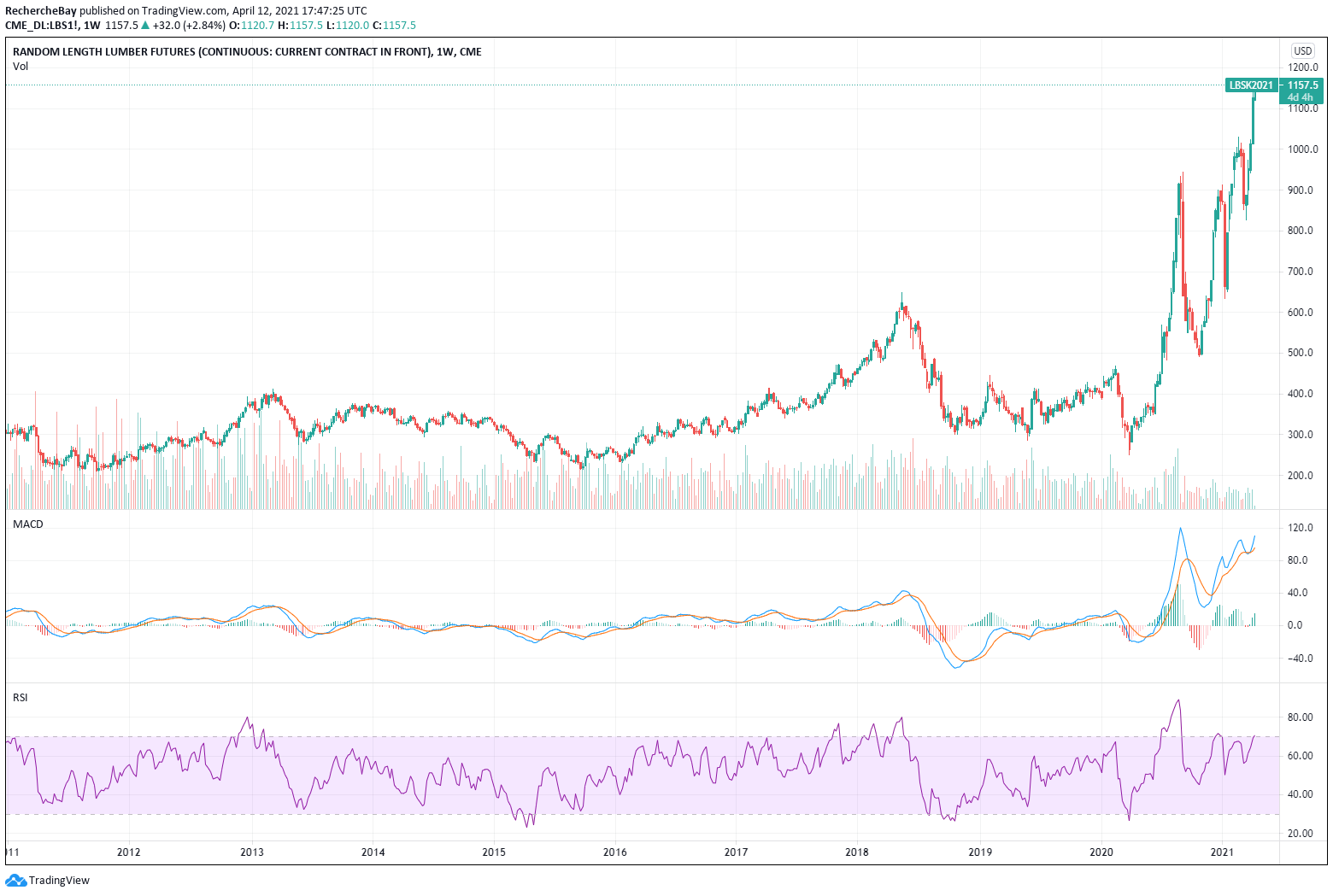 Regarding this, here is what the deflationists mapped out on construction lumber futures in last November:

This is why I do not use "Elliot waves" in my technical analyses. That simply does not work. A short on a sell signal of this configuration already “offers” you a loss of more than 40%!

Those who predicted a deflationary shock after the health crisis did not measure the short-term effects of the spectacular actions taken by central banks.

Inflation is starting to show up in the figures, but since there is no “price discovery” mechanism in the markets, precisely because of these monetary interventions, it is impossible to really know what it is... up until the time when one notices that in real life an essential good such as lumber has become unaffordable and therefore excludes a large portion of the population access to the American dream of building a new home.

The increase in commodities has a knock-on effect on inflation, as shown in the following chart: 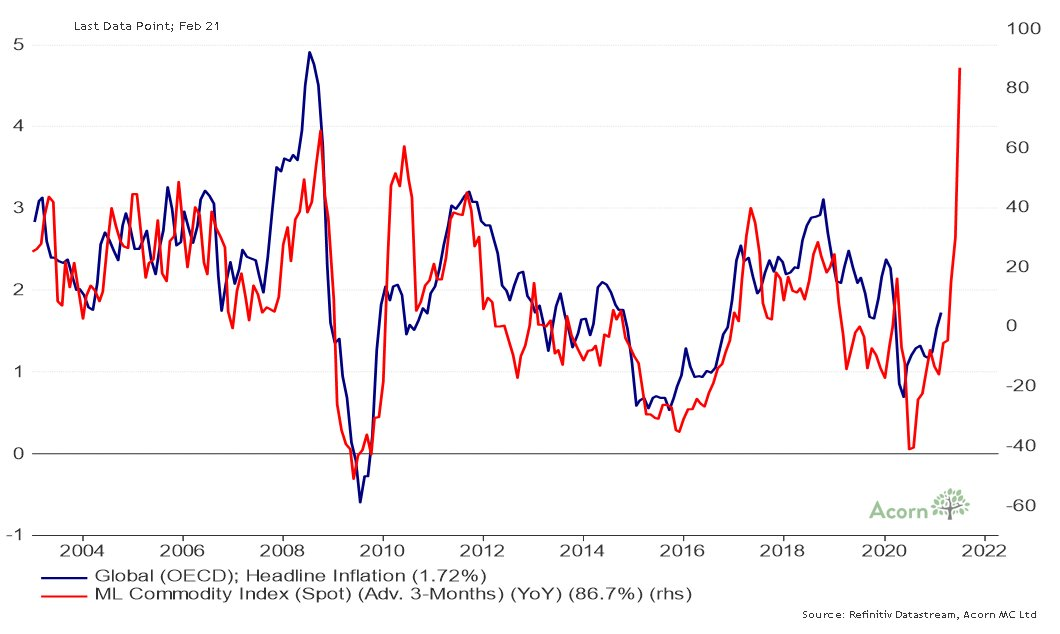 The CPI rate at 1.6% published today is higher than expected, but if you look at the increase in the price of commodities, it is more likely that the next figures will be even higher.

Without these market interventions, the reported inflation rate would have driven rates higher and the markets would have collapsed since, today, the equity market has become a derivative of the bond market: stocks remain at stratospheric levels because rates are being kept low. The market is pricing in growth, which is valued at zero interest rates. A rate hike would have a devastating effect on the price of these assets.

Without this market control, gold would also have exploded upwards with the release of such an inflation report.

Gold is today at a price that still does not take into account what has happened these last months and what will happen with respect to the coming avalanche of Treasury auctions to come.

Gold has not followed the price rise of other tangible assets over the last few months.

For this reason, it is considered an affordable asset and is currently being raided on the planet.

The sale of gold coins soared in 2020. Almost 300 tons of gold coins were sold last year throughout the world; that is 10% more than the second most active year in the market, which was in 2013.

These sales include India, as we saw last week, but also Australia, where the Perth Mint has to face a double run:

The gold rush also took place in China, where delivery requests picked up again in March. 167 tons of gold was delivered to Shanghai last month, the highest figure since 2019.

These attractive levels in the price of gold offers good opportunities to savers who consider investments in the physical asset.

But the action on the mining stocks is also significant since the dip in this sector two weeks ago. For several sessions now, there has been very marked purchasing of sales that occurred in the beginning of the week.

This movement continues to favor the silver juniors compared to the gold mining stocks.

Regarding this, we update it on the SILJ/GDXJ chart, which measures the performance of the juniors compared to the gold mining stocks that we mapped out last summer. 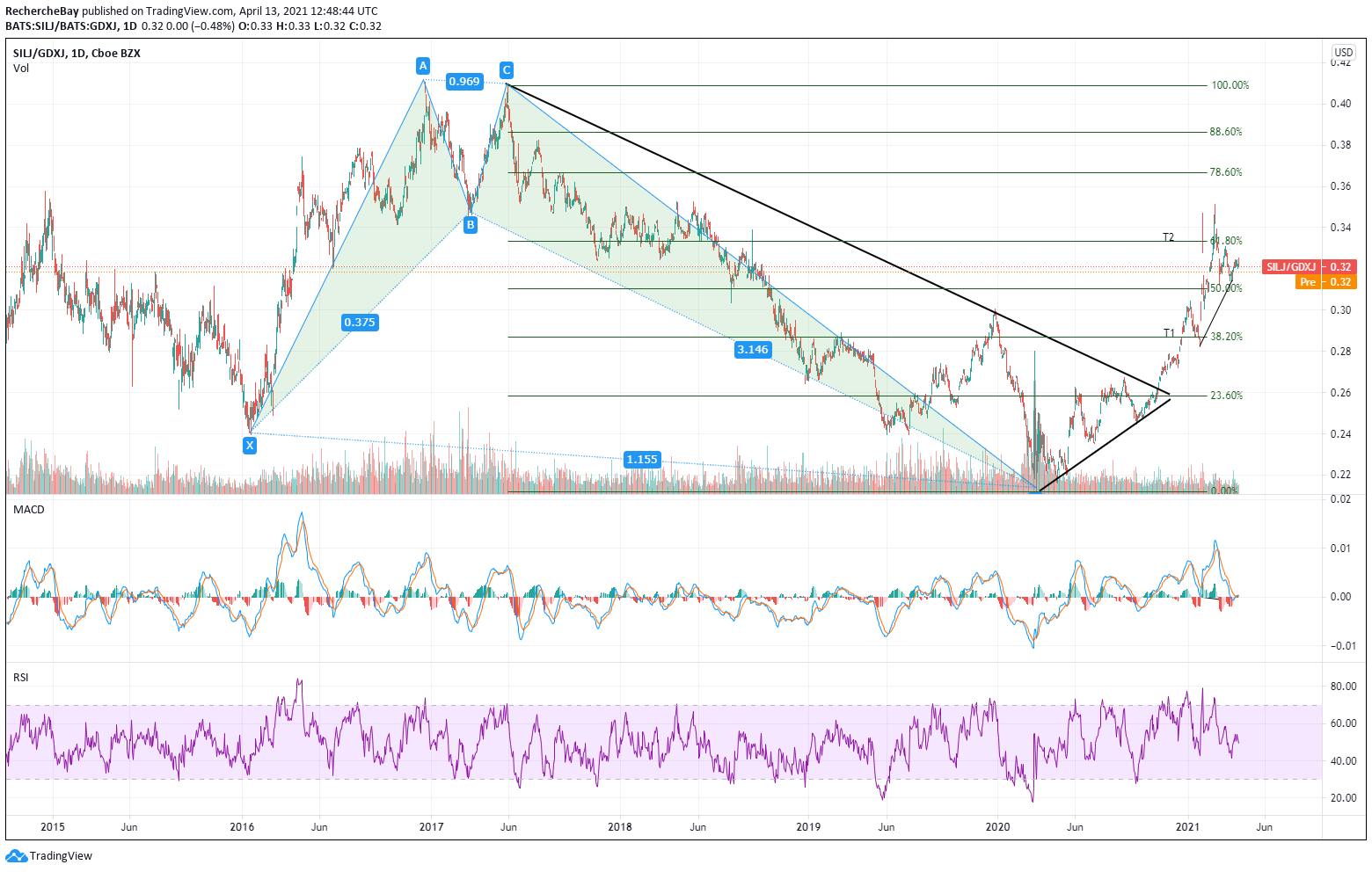 The SILJ/GDXJ chart started with a violent rebound at the end of a resolution of the upward harmonic “Crab” pattern of over 4 years.

As expected, this very strong figure has given the necessary impetus to pierce the downward trend underway since 2017. The first T1 target of the harmonic pattern was reached in the beginning of 2021, after a brief respite. The second target was reached very quickly afterwards, and it has resulted in a lot of volatility around this second target. This consolidation movement now operates with a hidden upward divergence, which should ensure a continuation in the increase of this chart over the mid-term.

I continue to favor strengthening on juniors which have corrected sharply since the beginning of the year and which are awaiting catalysts (funding plans, consolidation plans, expected drilling results in promising areas, etc.)

The coming impetus in the mining sector is likely to be very strong since the energy accumulated during this consolidation has the potential for a very violent release.