Let’s start this article with a little technical analysis...

Right now, gold is in the process of testing a breakout through the height of its consolidation channel, which began in August 2020. The last time this was the case, gold was unable, unfortunately, to confirm its breakout and we even saw it go back and test the bottom of this channel on two occasions. This time around, we are witnessing a significant crossing of the MACD in the weekly figures. A threshold that is still to be crossed is the MA 50, which is at $1820 and which will certainly be an important barrier in terms of whether or not this new breakout is confirmed. 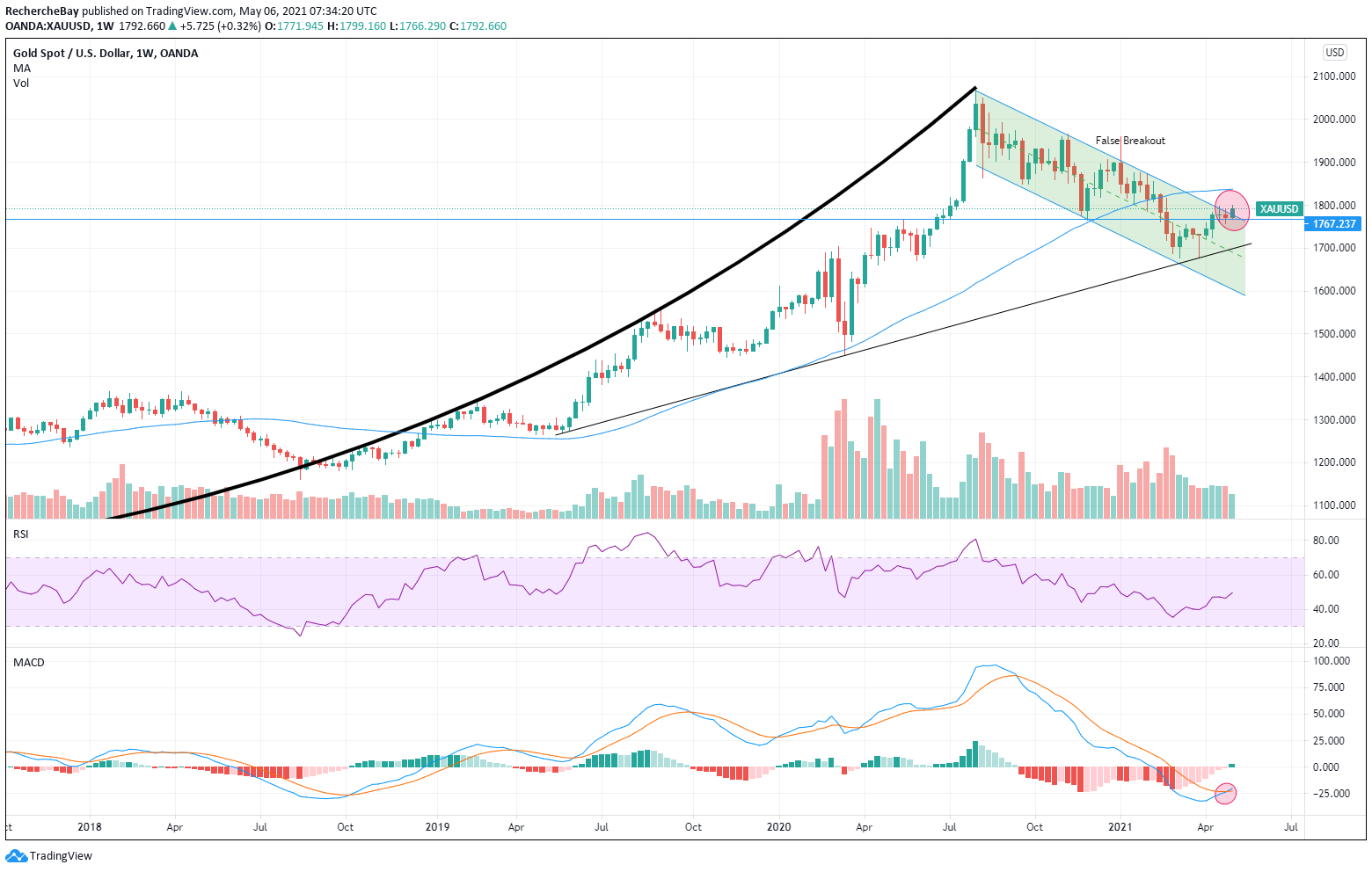 In the community of precious metals investors, one senses there is far less enthusiasm this time around at this crucial moment; expectations on this technical level are lower. This is fairly easy to understand, given the metaphorical slap in the face they received in the first quarter following this breakout that proved invalid at the start of the year. Mining stocks aren’t really contributing to the establishment of a climate of confidence about what’s coming next, either. The disappointing results of Eldorado and Lamgold sent these two companies’ stocks plunging by almost 10% upon the announcement of results that were slightly worse than expected, and even though these two mining stocks are continuing to generate a consequent cash flow, the market can no longer cope with a mining stock failing to live up to expectations. We are still firmly entrenched in overwhelmingly negative sentiment for the sector. The volume of short positions is still very high in a segment that is nonetheless one of the only ones to be generating comfortable margins at such a low price...

It’s as if the market were finding it very hard to discern the potential for a rise in gold right now, even though we have never before been in such favorable conditions for the precious metals sector!

Truth to tell, the market is having enormous trouble discerning anything when it comes to valuations... for the massive intrusion by the Fed on the credit markets has completely shrouded out the “price discovery” mechanism. As the economist Judy Shelton explains, “In a free-market economy, you use price signals to indicate the optimal use of investment capital. When this free mechanism of price discovery is no longer working, you really risk the misallocation of capital.”

The artificial propping up of the bonds market by the Fed is concealing the fact that the budget situation in the United States has deteriorated dramatically. The double deficit in the U.S. is without precedent in the post-war era. The U.S. is spending far more than it is bringing in through the levying of taxes, and its exports are far too weak compared to its imports. In a situation like that, a country’s currency ought simply to collapse, and those holding the debt of such a country should hasten to liquidate their equities. The market ought, in any case, to remunerate the holders of U.S. Treasury bonds in a far more substantial way. This is not yet the case: the action taken by the Fed, which is monetizing the debt and supporting the rates, has postponed this depreciation of the U.S. currency: 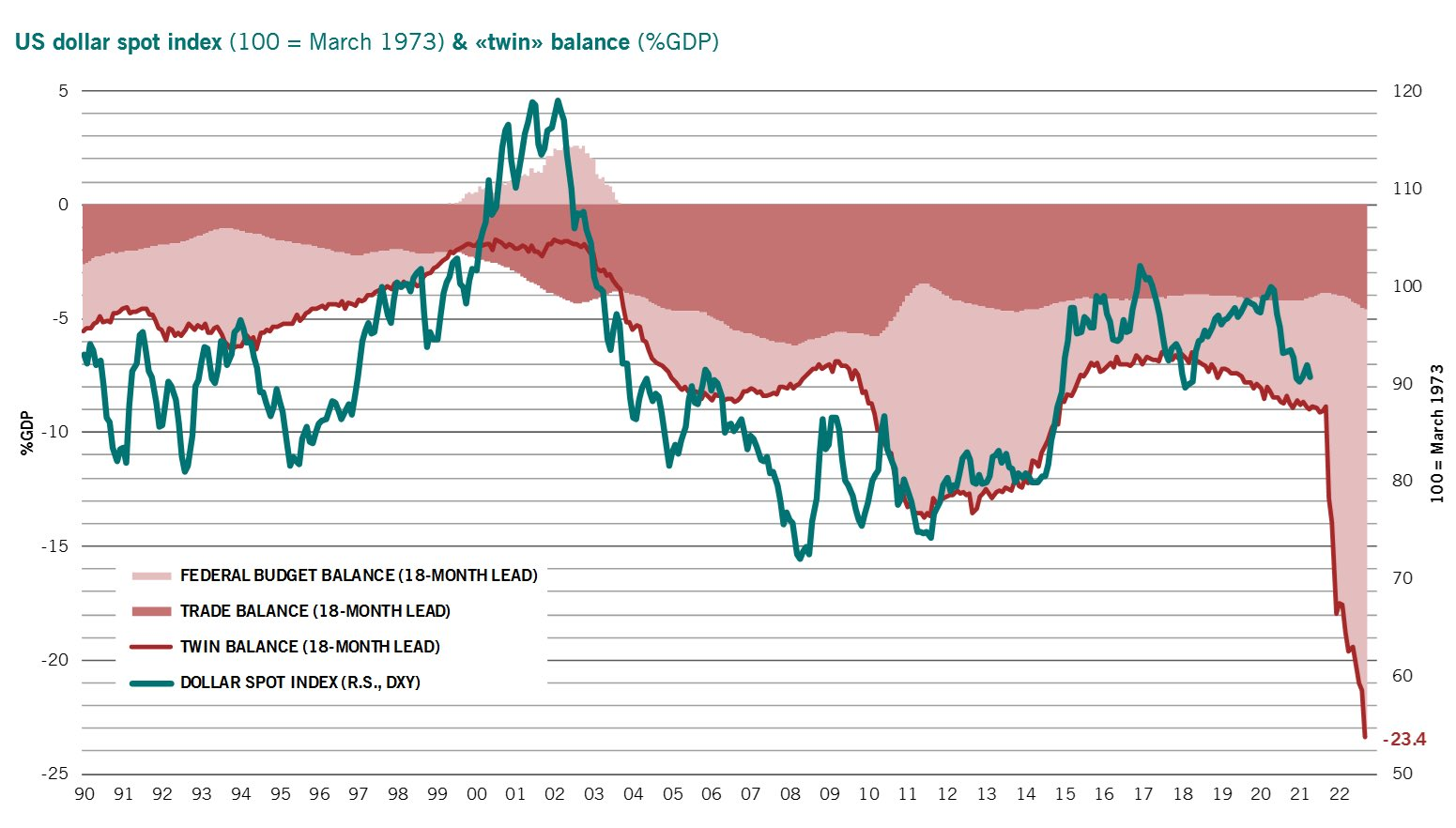 The dollar’s valuation is still far too high in relation to the explosion of the U.S. deficit that we are witnessing. The Fed’s intervention is restricting movement, for the time being, on the bond market. The levitation trick with the dollar is continuing, and, thanks to that action taken by the Fed, gold is being artificially kept at levels that are too low by comparison with the numbers a free market ought to be registering. The gold price is acting precisely like a benchmark monetary instrument, at a time when currencies ought to be seeing their value fall in these inflationary periods. The action taken by the Fed is preventing this adjustment from happening.

This rise in the deficit is caused by the distributing of free money initiated by the Biden administration in order to relaunch the U.S. economy following the sanitary crisis. This influx of free money has made Americans’ disposable income shoot up, and this has helped to increase, in a very furtive way, the amount of savings available. In this first part of the year, this share taken up by savings has climbed to a new record, in fact, but the distribution of the latest round of checks, married to the very tangible increase in prices in recent weeks, has prompted a spectacular rise in spending that the following chart sets out far more explicitly: 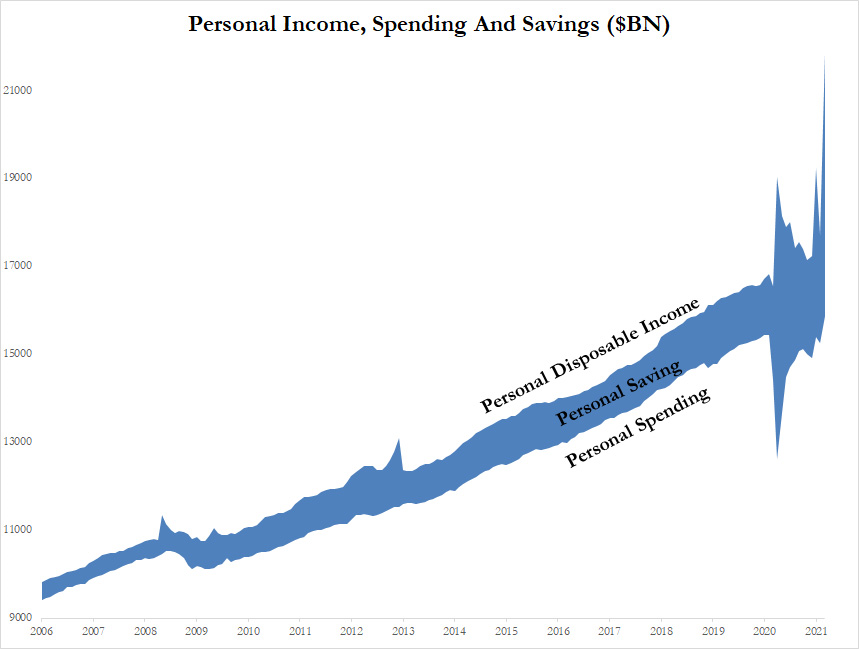 The more you distribute money, the faster it is spent: consequently, the supply times are getting longer and stocks are falling sharply: 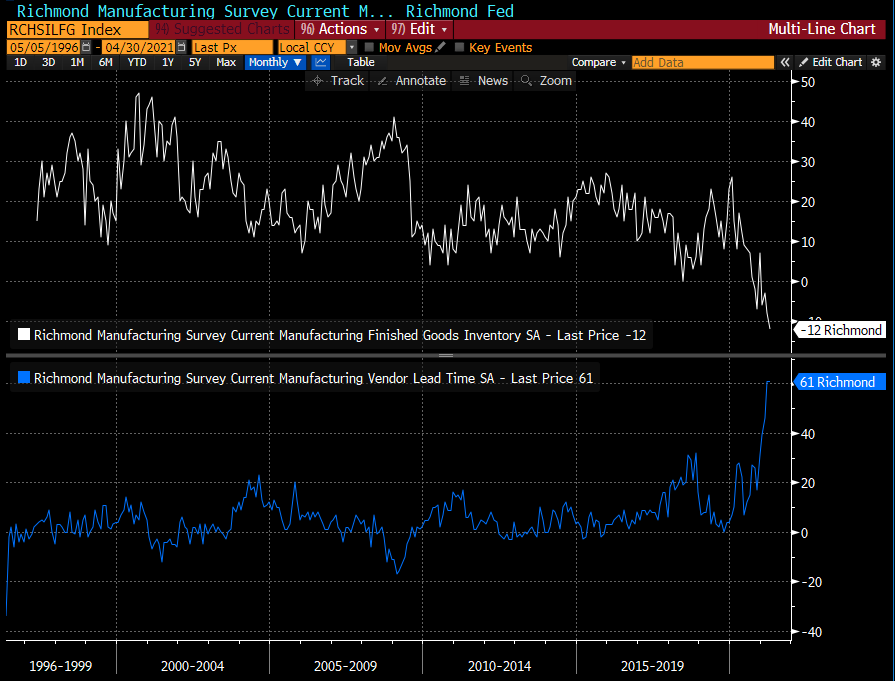 This purchasing frenzy is supporting the continuing of the rise in the prices of consumer goods.

This rise is benefiting, above all, Chinese exports, which are soaring toward a new record. 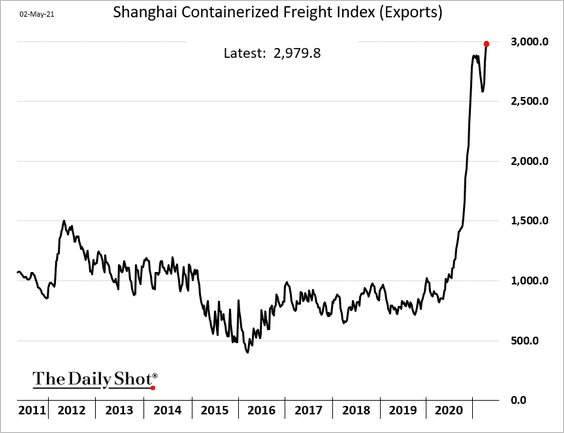 This rise in manufactured prices is reflected, in turn, in the prices of commodities. As we foresaw in our latest articles, inflation is now a self-perpetuating mechanism. The price of lumber has once again reached a record high this week and that now poses a real problem in the market for new construction in the United States.

This rise in the cost of commodities is also prompting stock shortages, which, in turn, are leading to a new phenomenon of backwardation on commodities: it is cheaper to buy straight away rather than paying for a delivery that is supposed to be effected in the near future...and is uncertain! 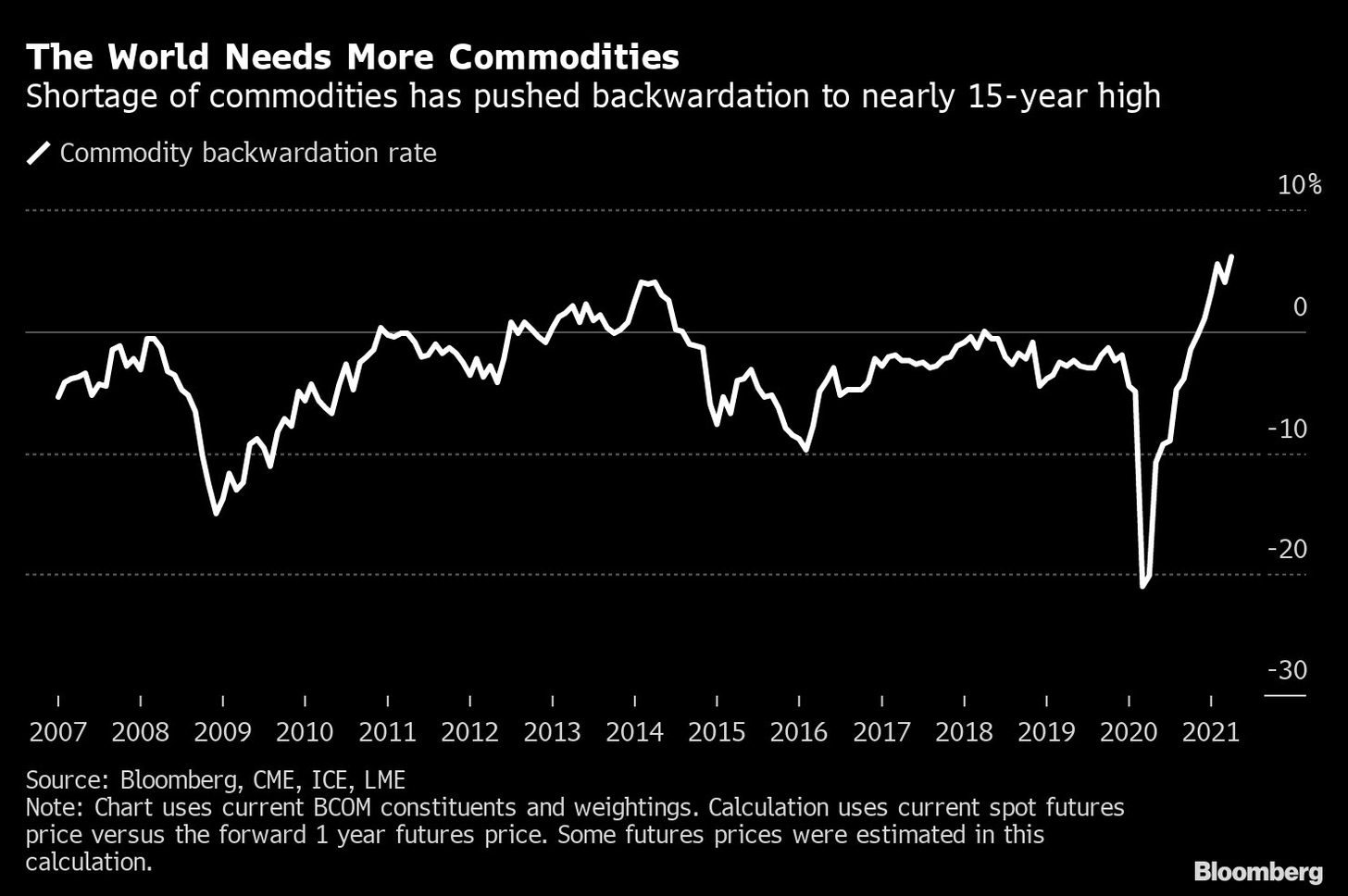 Inflation is now accelerating its contagious spread to more and more sectors of the economy. Inflation is now spreading significantly at the level of salaries, whose level has moved from an annual variation of -8% to +6% in the space of scarcely a few months! It should be noted that this sharp rise in the level of salaries is only happening in the private sector: public sector workers in the U.S. have not had their wages increased to the same extent. 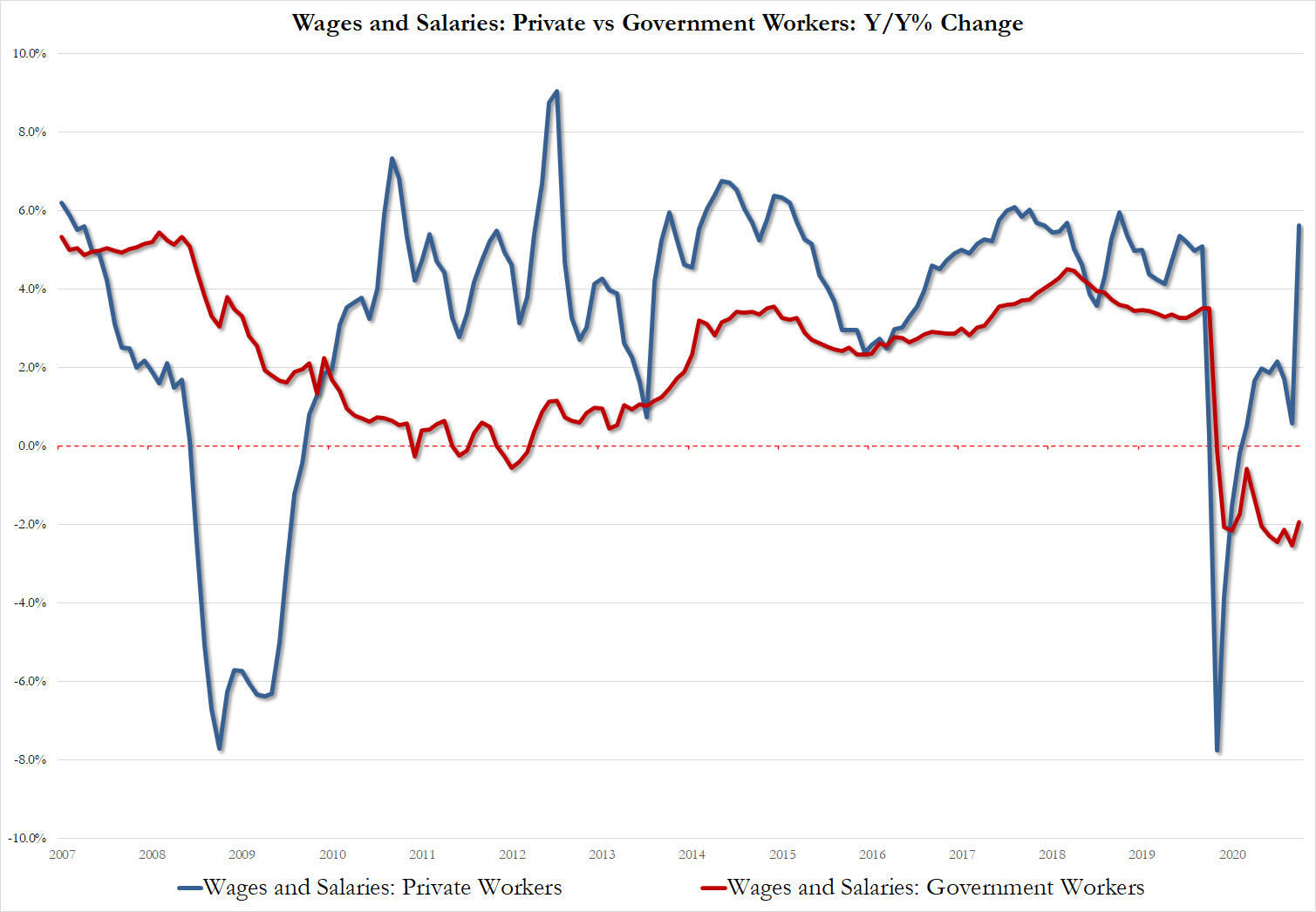 This is a fairly classic phenomenon amid sharply rising inflation and monetary devaluation. As a reminder, when the Russian ruble collapsed in 1998, Russian civil servants weren’t paid for several months...The public sector workers and households that are directly dependent on benefit payments from the state are still, logically, the first to pay the heavy price of a fiscal policy that aims to devalue the currency.

This inflation on commodities is being transmitted globally and, in Europe, we are starting to witness the comeback of inflation, even though the economic situation isn’t the same on this side of the Atlantic at all. The price of imported goods is skyrocketing, the German CPI is en route to its highest levels in 10 years: 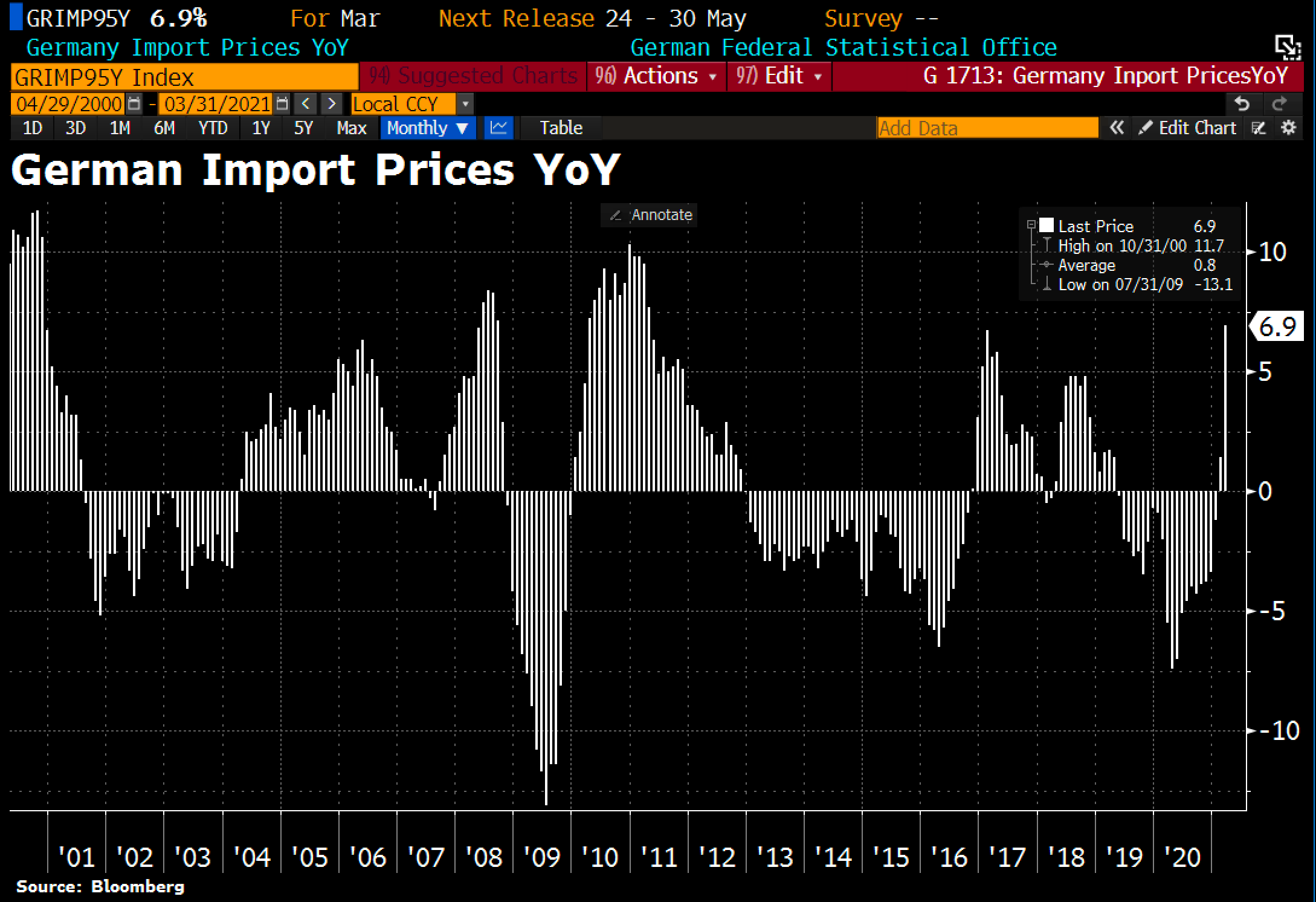 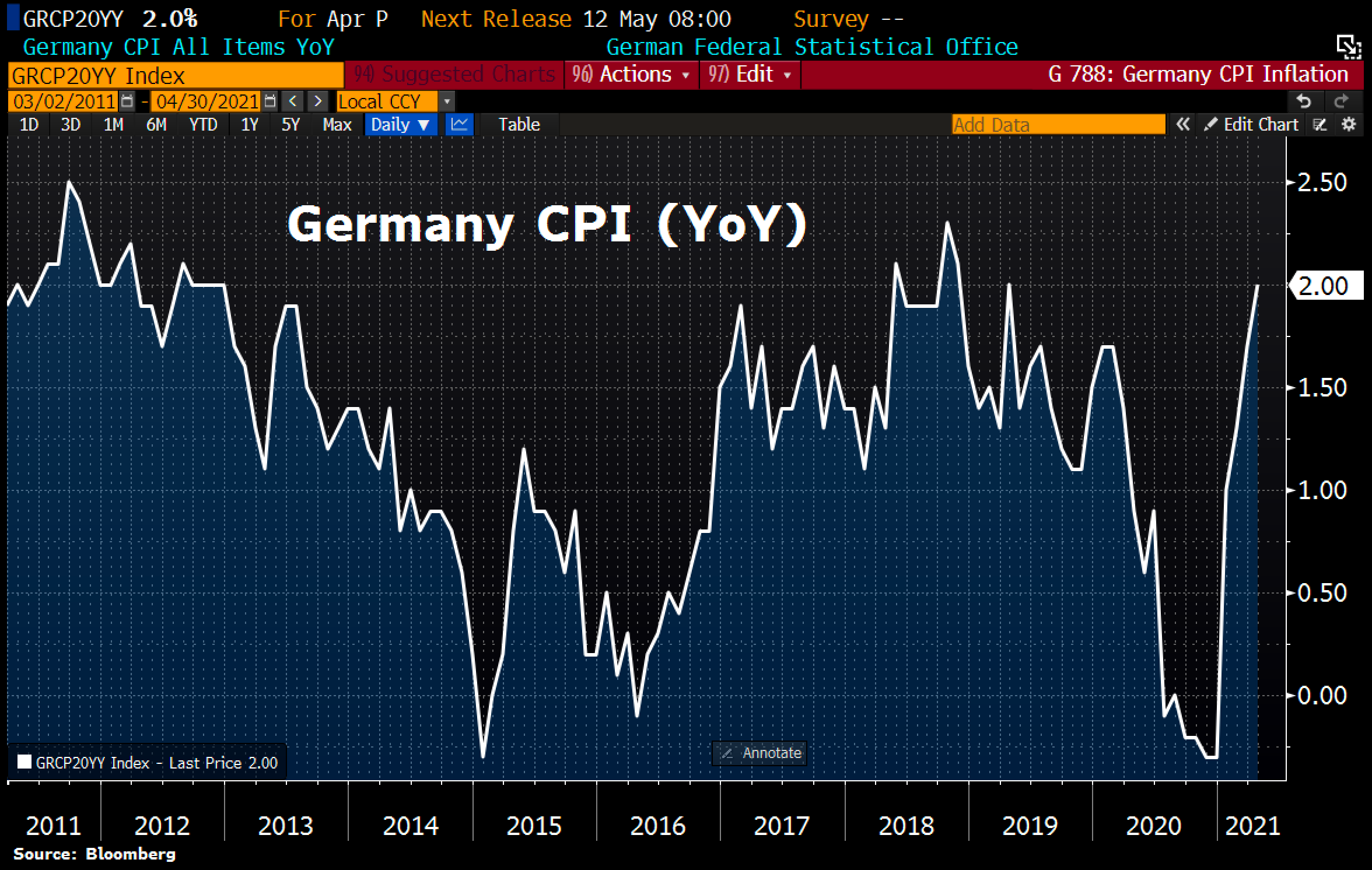 Inflation is self-propagating and highly contagious.

It is contagious from one sector to another, and from one country to another.

Another consequence of this inflation is that a ton of CO2 emissions has exceeded $50 for the first time since this “polluter-payer” index was created by Europe. This is going to increase the production price of polluting companies: either they adapt to the new green path imposed, and will have to pay more for the commodities necessary for their ecological conversions, which are increasing constantly. Or they will have to pay taxes associated with their emissions, which are also rising incessantly: 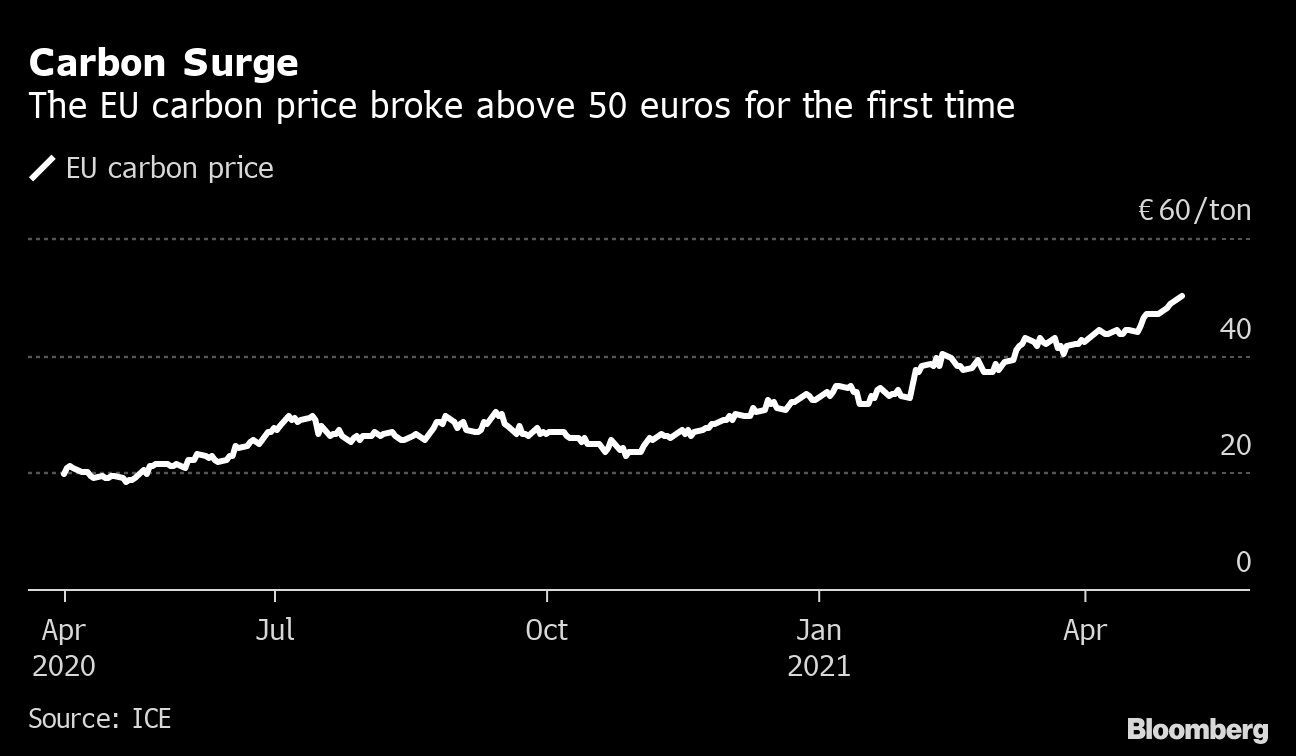 Faced with this huge rise in prices, and because they are staying for the time being at levels that are artificially too low, gold and silver are the rare sectors which can today offer an investment opportunity in a market in which it is now so difficult to determine the real value of what we’re buying.

The mining stocks in the gold and silver sector, which are even more disconnected from their real value, are still at levels that are, historically, very attractive.

The mining stocks have started to generate cash flow again, with levels that no longer justify the sacrificing of their prices at all. 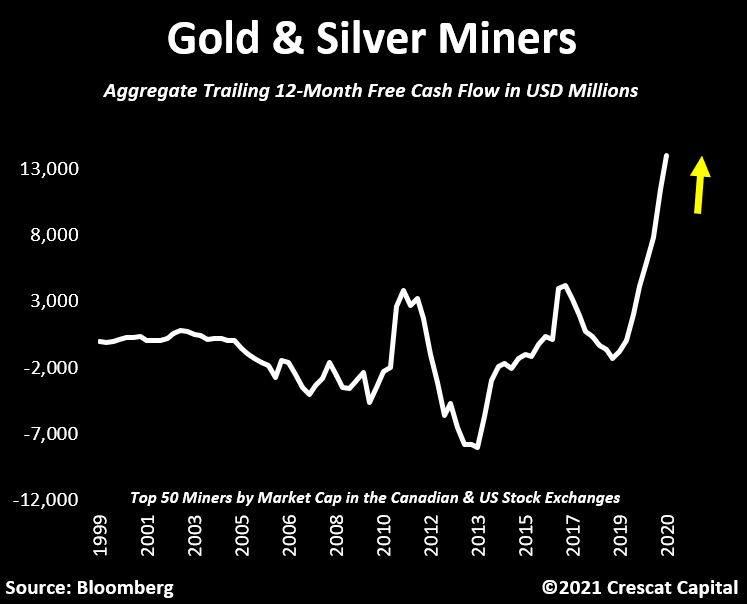 Just imagine what a rise in gold or silver would bring about on this level of cash flow, and the potential for a resurgence that exists at this level on these mining equities…