Every day, a new economist from the Fed tells us that inflation remains a transitory movement, and yet the data on the ground move a little farther away from these reassuring statements: the actors in the real economy are confronting a historic high in prices, for which they are very unprepared.

The prices for natural gas in the United States reached their highest level in two years this week.

The prices for coal also reached more than $120 per ton this week, their highest level since 2011.

The price of steel coils is finally starting to have a breather after its vertiginous rise over the last 10 months. The price of this absolutely vital industrial component has risen three-fold since last year: 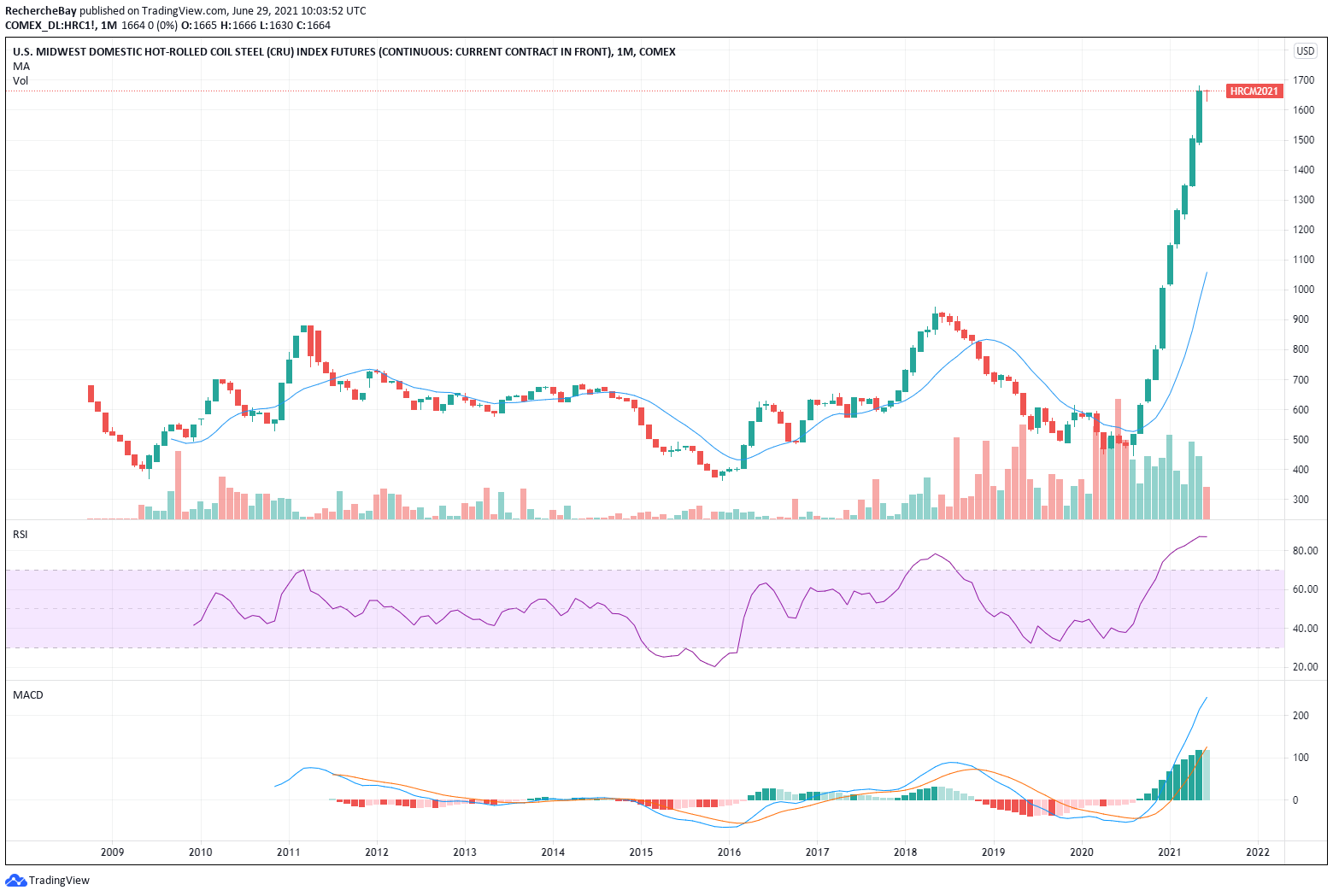 How are manufacturers going to ensure that this rise does not have a knock-on effect on consumers?

The contagion is moving from one sector to another...and also from one region to another.

For now, this inflation is being felt first and foremost on the American continent:

The European countries remain hooked on the mirage of affordable prices thanks to the effects of the productivity gains engendered by the globalization of the economy, the digitalization of activity and the associated gains in productivity.

There has never been such a big discrepancy between the European Price Index and the U.S. figure. The rate differential is reaching a record value. 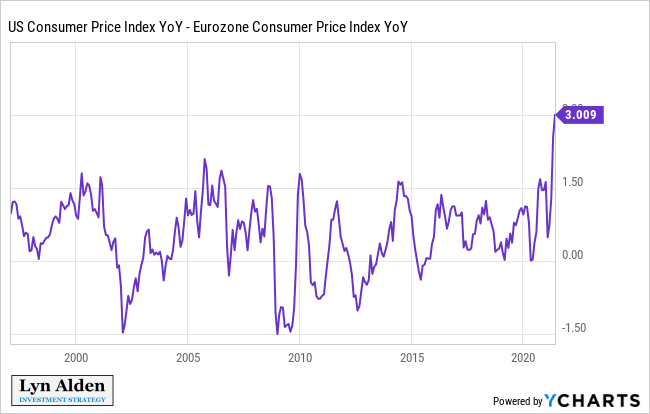 The price index in Germany is a long way from the U.S. index, but, as the chart below explains fairly well, these two indices are following one another with a slight time-lag: 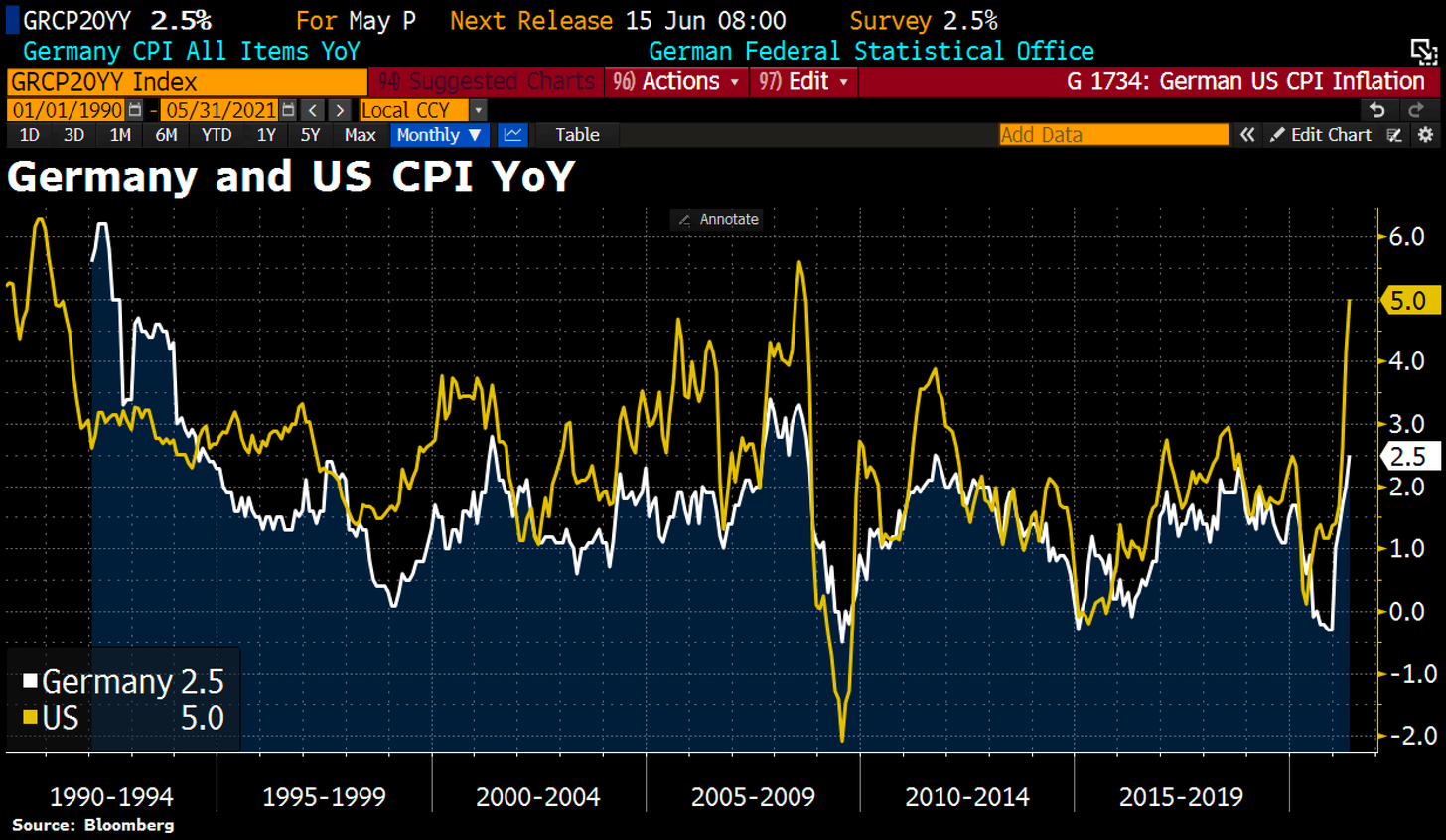 Logic would certainly suggest that inflation ought to be pointing the tip of its nose toward Germany very soon, all the more so given that the country is far more sensitive to energy costs, which are starting to soar...and that the Germans are no longer managing to make gains in productivity...

On this topic, an article in the German newspaper “Die Welt” reminds us that the engine of German competitiveness was turned off in 2018 when the country saw its curve in productivity gains turn around.

Productivity in the industrial sector has been falling since 2018 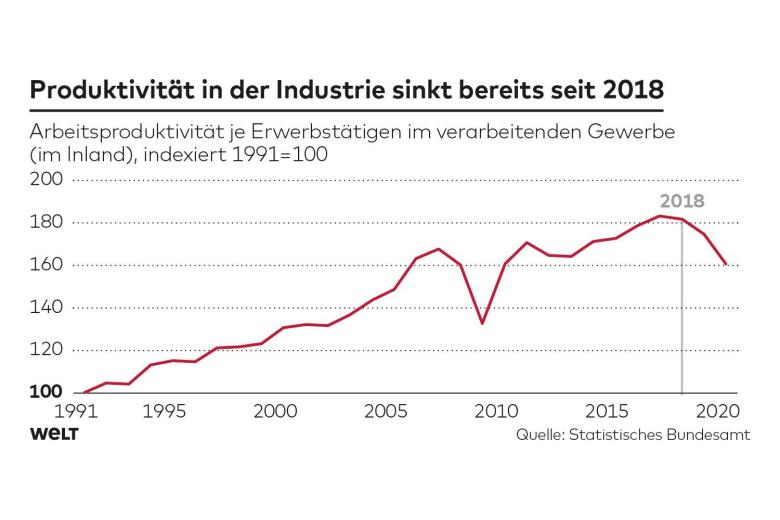 Germany is the second most expensive industrial company 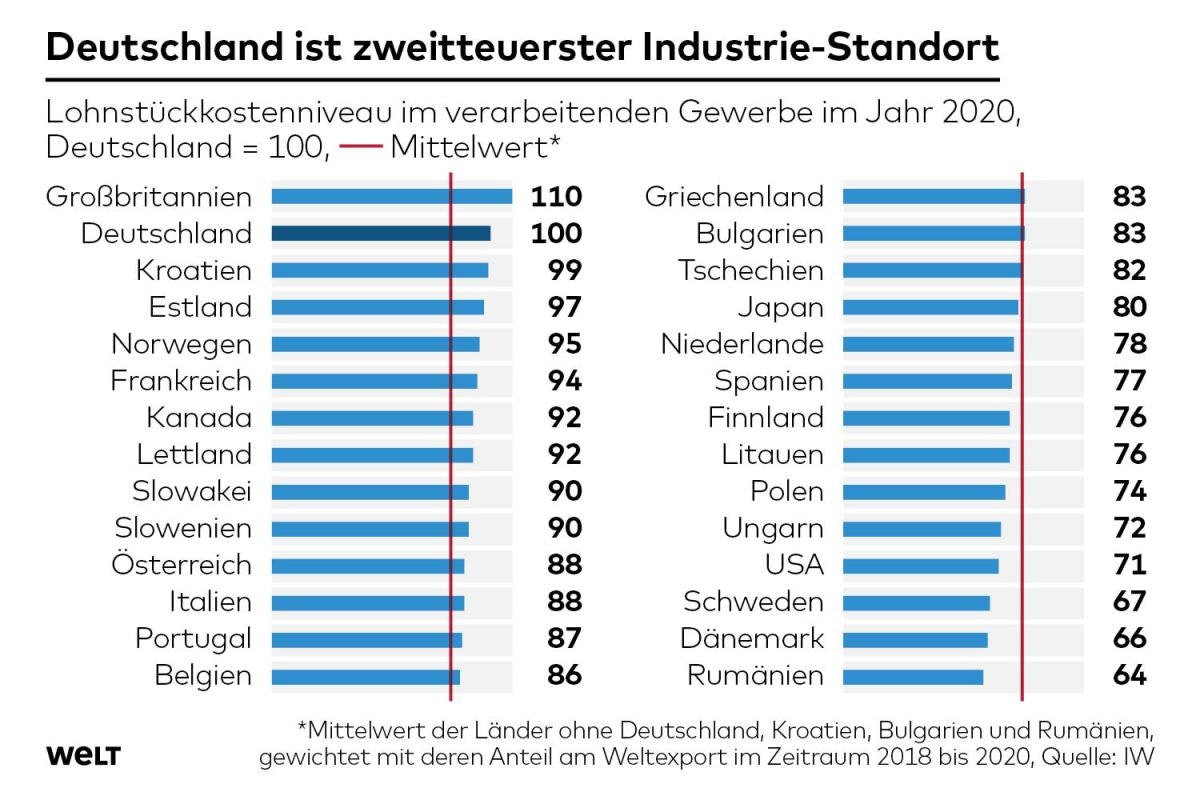 Germany must confront record levels of labor costs, something that is even more dangerous right before it has to confront an inflationary cycle in the country.

Moreover, import prices are starting to rise significantly, to almost 12% in terms of the annual variation. This is a record since the ’80s. 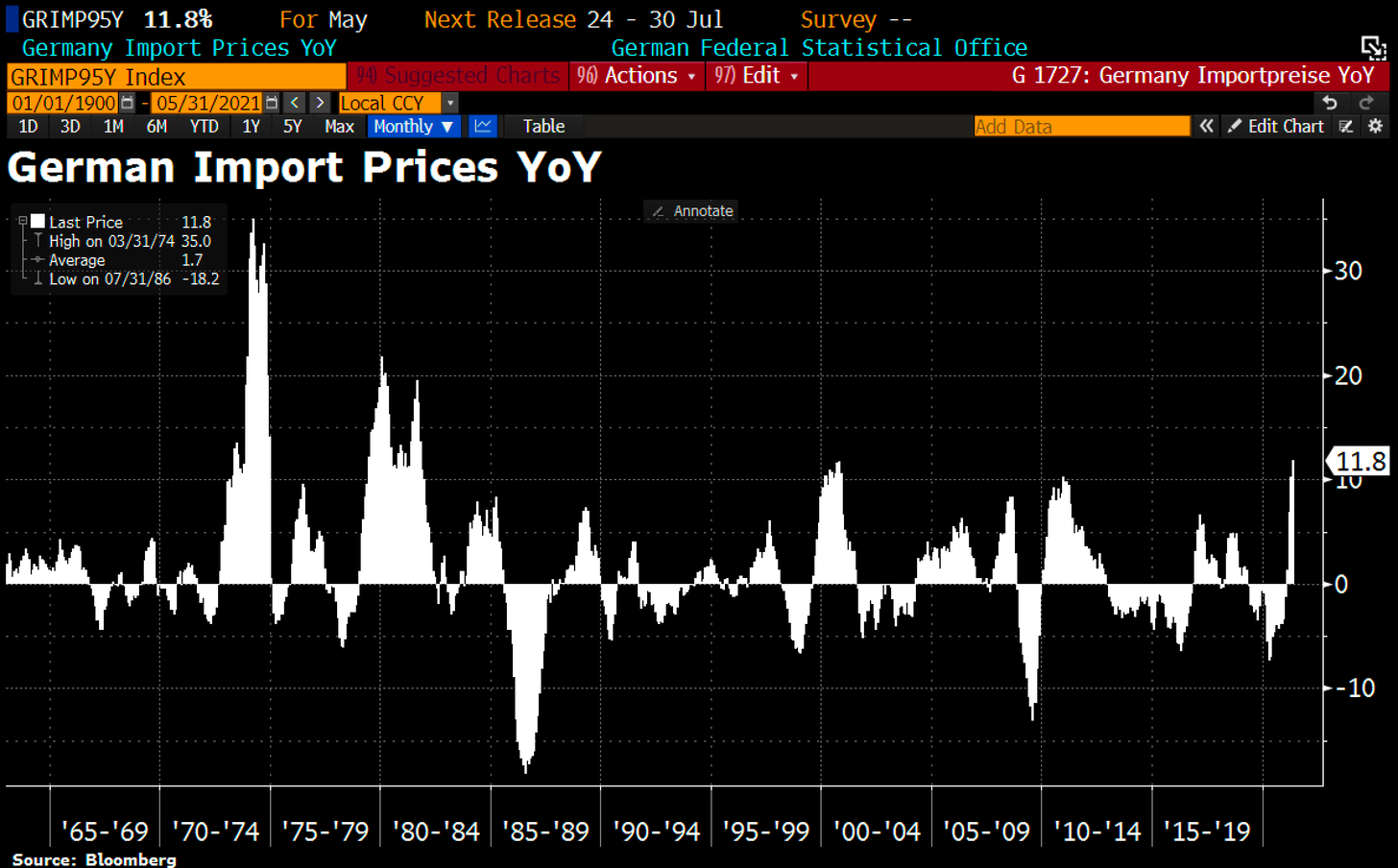 This rise in inflation is being accompanied by a strong rebound in confidence in Europe, which is at its highest level for 21 years: 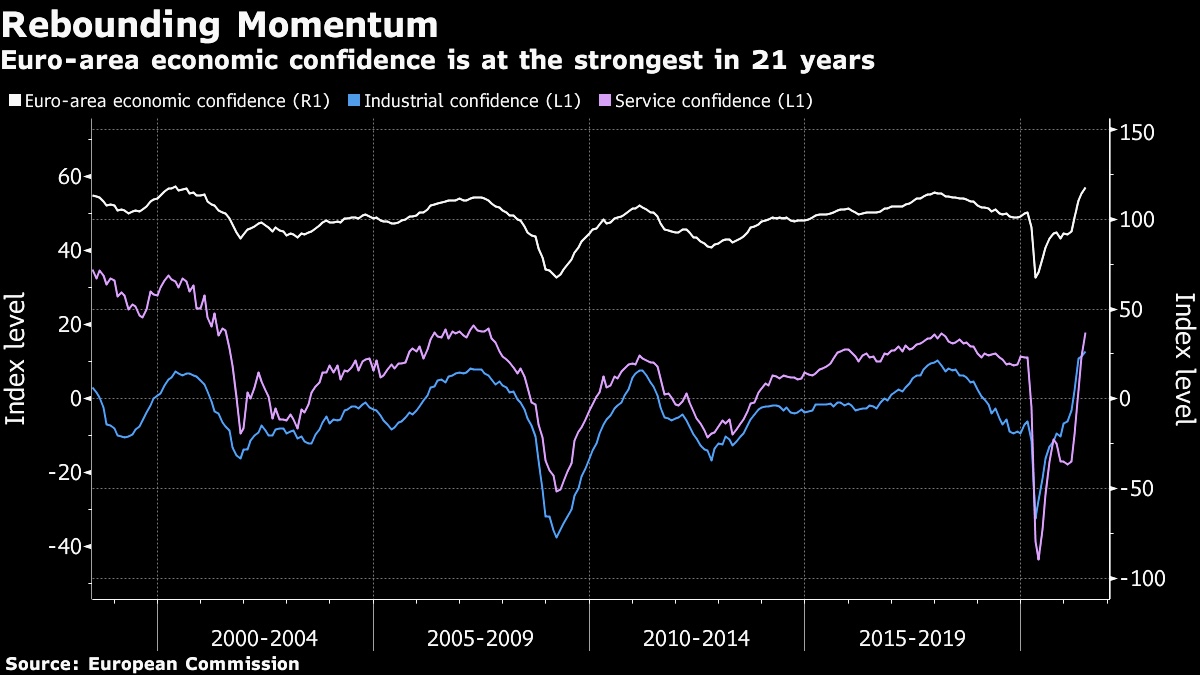 The Business Climate Index (IFO) is at its highest since November 2018 in Germany, with the “Expectations” component of this indicator returning to levels not seen since... 2010!

This optimism is, entirely logically, following the impressive figure for new orders in the United States in the month of April, confirming that the reflation movement is now spreading to the European continent. 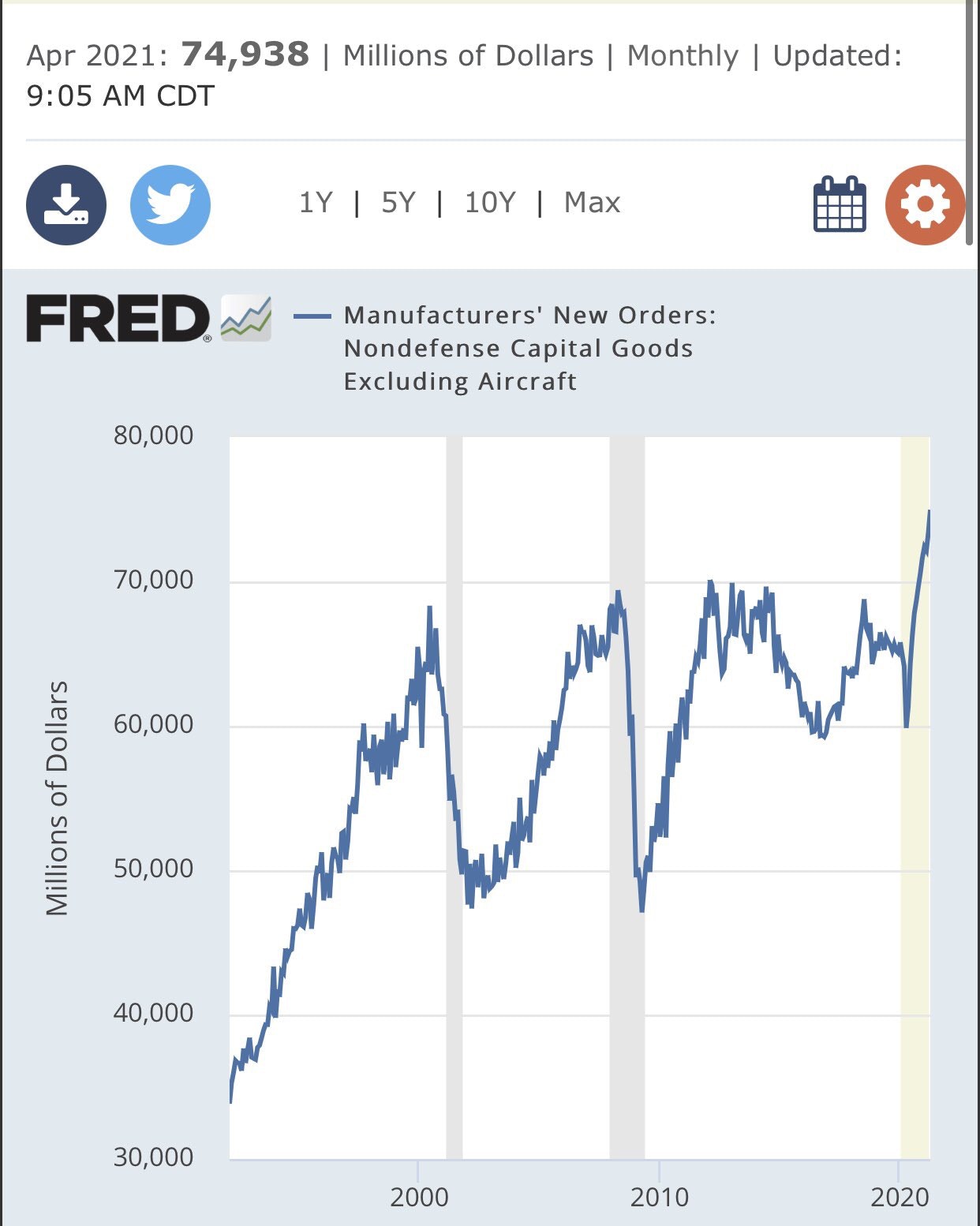 These figures ought to be prompting the ECB to be considering slowing down, or even stopping, its monetary easing. But not a bit of it. The ECB is on the same path as its big sister, the Fed.

It should be said that the Fed, despite the reassuring discourse regarding inflation, has just completed its program for purchasing more than $38 billion worth of assets this week. That means another $149 billion on its balance sheet, or almost $200 billion in 4 weeks, its all-time biggest figure for monthly purchasing! 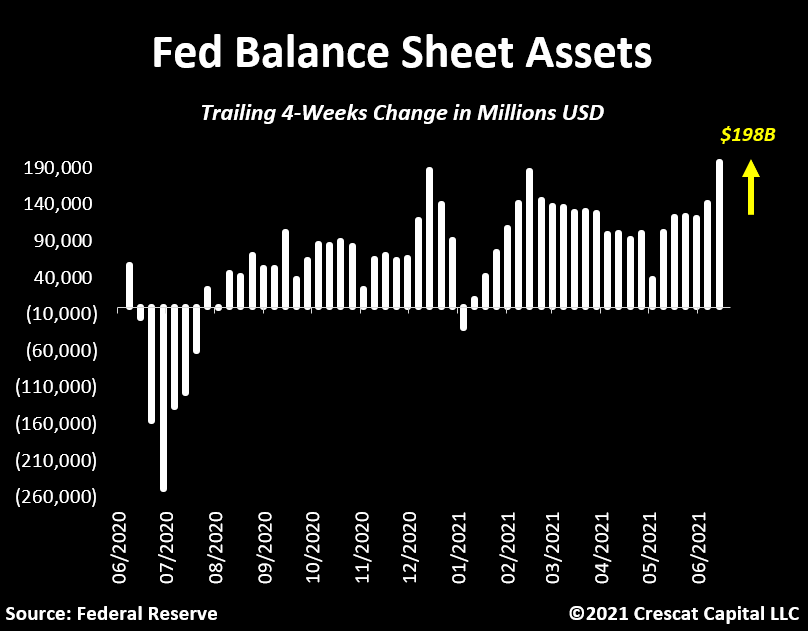 While the Fed attempts to reassure us about inflation with hawkish terms, it is increasing its purchasing of assets at a record rate. There is, decidedly, an enormous difference between what the Fed is saying and the way it is acting. To go back to that image from last week: it’s as if the overweight patient has left the doctor’s surgery after promising to go on a diet in two years’ time, and gone straight to the bakery on the corner for some pastries!

Like its big sister, the ECB has thrown itself into a new asset purchasing plan, even as inflation points its ugly head toward Europe.

Brussels is getting ready to launch a vast recovery program: NextGenerationEU (NGEU). The program will be worth almost a trillion euros, at least one third of which will consist of “Green bonds”, which will be “driven” by the ECB. In other words, the success of the operation is entirely dependent upon a new wave of purchases of additional assets by the ECB, to guarantee the success of the new bond issuance operation.

This program announcement is happening at a time when numerous (non-commercial) speculators are starting to open short positions on the Euro, at a rate not seen since March 2020: 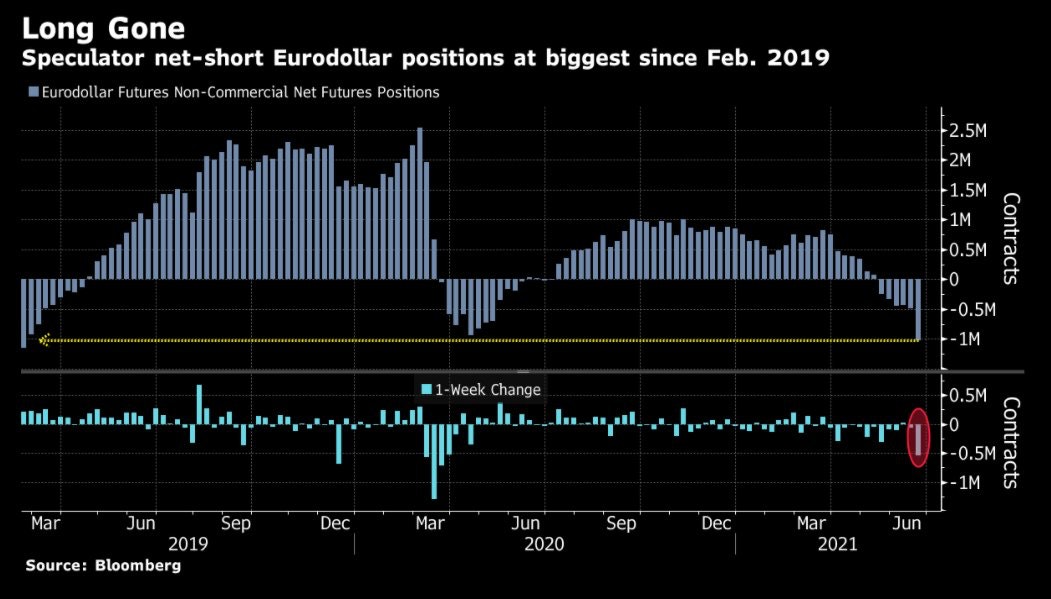 The ECB’s upcoming purchases of assets will thus take place with a far more marked inflationary risk, and that risks causing tensions with the European economic players, who are going to have to adapt their strategy in an environment that has been totally transformed by this inflation.

The economic actors’ confidence regarding the central banks’ ability to correct this inflation, which they deem to be transitory, is certainly not open to question today. However, without rapid and specific action by these central banks (particularly on interest rates), this patience, which is also transitory, is at risk of wearing thin.

The barometer of this confidence is gold.

As we near the end of June, in this climate of confidence in the central banks on the subject of inflation, gold has invalidated the rise of the last two months and the upward breaking of its consolidation movement, initiated last summer. The short-sellers have managed to keep the gold price outside of its breakout zone, and the sector’s bulls must arm themselves with a little more patience. Until the threshold of $2000 is exceeded, the real phase of increase will not have begun. Until then, patience is necessary.

This situation of waiting on gold is giving rise, as is often the case, to an oversold correction on the mining companies.

The short selling of futures contracts a few days before the expiry date of said contracts has the objective of provoking margin calls on long sellers to avoid there being too many requests for deliveries. This short selling is being systematically accompanied by a sale on the mining stocks in anticipation of these “spoofing” sales. For all those who have been following this sector for many years, reading these movements of algorithms makes it possible to better adjust their purchasing positions, around these contract expiry dates.

Late June is traditionally very volatile, particularly on silver, because it is an important delivery month on the Comex. At the start of the week, there was still a fairly large number of contracts on the month in progress. With each delivery made, the market’s forward reserves get a little smaller. If this movement continues, we may well see a default in delivery on the market, and that would have consequences on the determining of the price of silver, strongly conditioned for the time being by this short selling on the Comex market. While silver ought to find a freer method of determining its price by a simple law of supply and demand, it is likely that silver would not be changing hands at its current levels but at far higher levels.

Let us return to our mining companies, however: this time, the pronounced sale of stocks in the sector, which is prompting the valuation of these companies to reach ridiculous levels once again, is taking place in a different context.

During this last quarter, mining stocks beat their record for positive cash-flow that had stood since 1994. Their annual growth in free cash flow (FCF) has hit a record level, all sectors combined, very often being in 3 figures for the leaders in the sector. 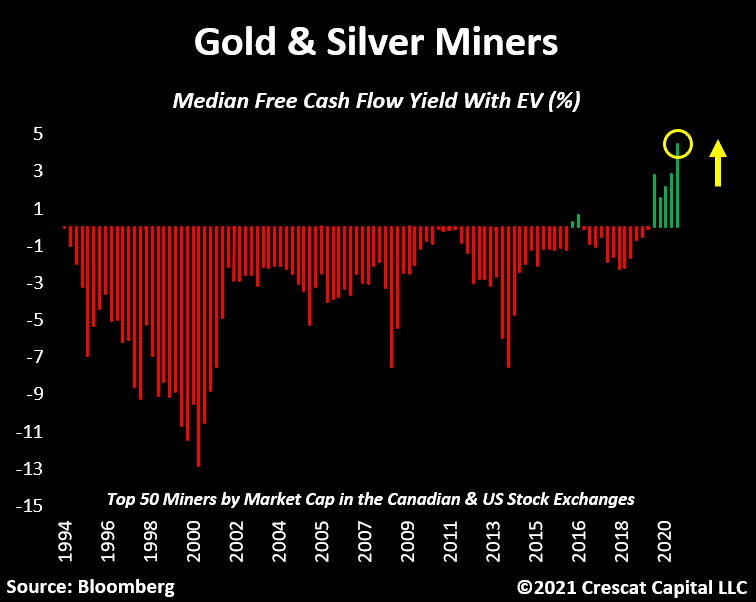 With this new downward leg on the mining companies, we therefore find ourselves, in late June, with levels of capitalization on certain companies that have barely a few quarters of cash flow.

On the other hand, these companies’ dividends now enable the sector to offer the best yields, all sectors combined.

Despite these figures, sentiment in the sector remains at an extremely negative level, and this is only attracting contrarian investments and not an investment trend, at very low volumes.

For us, it is a real bargain.