There have been almost 800 different currencies since the 18th century. On average, they have a life expectancy of no more than a few decades. The COVID crisis has amplified certain irreversible trends: massive monetary creation, highly structural deficits, decline of the West, a fall in growth and the end of disinflation. The current monetary (and budgetary) equilibrium is generating gradually increasing tensions. The necessity for monetary reform ought quite naturally to re-emerge, likely within the next 20 years.

THE LIFE EXPECTANCY OF A CURRENCY

In an article by Mike Hewitt, we learn that 77% of the 786 currencies known to have existed since the 18th century have disappeared. Moreover, 25% of the currencies that are no longer with us disappeared as a result of hyperinflation. The life expectancy picture for currencies is very fragmented: a large proportion of currencies are maintained over short periods, whereas others last for centuries. The pound sterling is the oldest currency of all, having turned 327 in 2021, followed by the dollar, which is 229 years old.

One can see, however, that currencies’ lifetime has tended to increase since the end of the Second World War, primarily on account of the continuous growth. In 2008, the life expectancy of a currency was approximately 3 decades (27 years).

ECONOMIC CYCLES AND THE DESTINY OF CURRENCIES

The destiny of currencies is dependent on a number of factors: 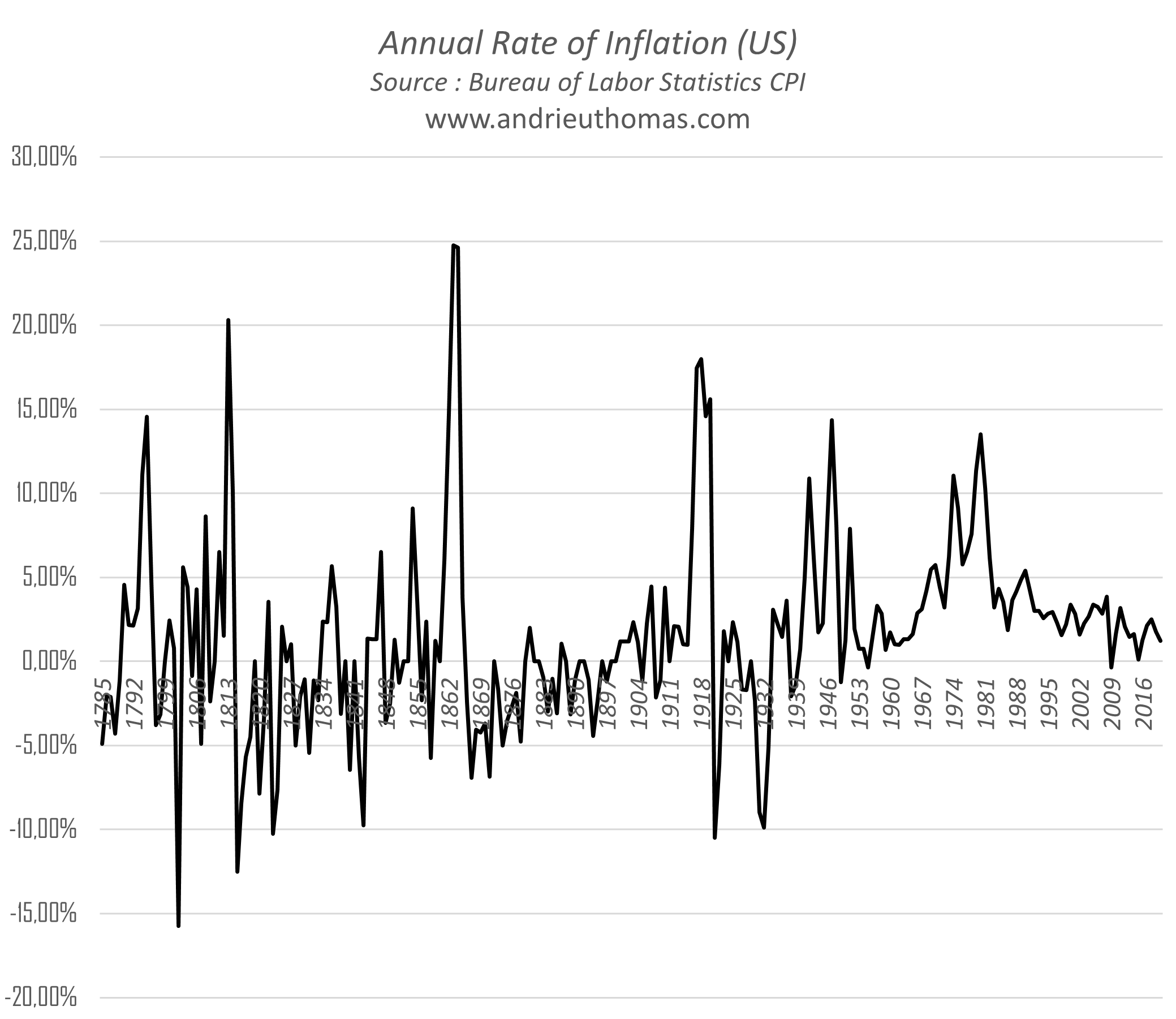 The above chart sets out the rate of inflation in the United States since 1785. We can see both the recurrence of 54-year cycles (2x27) and of shorter cycles of 9 and 17 years. Inflation is linked, by its nature, to currency and to growth. This explains the direct link between currency, growth and inflation. The cumulative effect of cycles of inflation and recession inevitably means that any currency equilibrium is unstable over time. If we follow this logic, the next 13 years ought to be hit by more recurrent inflationary cycles (statistically, 2025-2026 and 2033-2035).

At international level, the Bretton Woods system lasted 27 years (1944-1971). The Bretton Woods Conference in 1944 enabled the dollar to win a decisive victory over the pound sterling. After that, we had a succession of agreements and monetary systems, until the creation of the euro in 1999, i.e. after another 27 years. If we look further back than 1944, we reach the year 1918 by applying more or less the same span of time. 1919 corresponds to the establishment of a floating exchange rate system, before the gradual return to the gold standard with the Genoa Accords in 1922. Each monetary system can be subdivided into three waves of reforms, every 8 to 10 years.

Based on these simplistic recurring patterns, we can deduce that the next target period will be in around 2025/2026. This time-frame is certainly very consistent with the in-depth cyclical study of the yields, of inflation, of growth or indeed of petroleum. In the current context, a return to the gold standard is not very likely. It seems clear, however, that a context like this would favor gold in the long-term. The need for reform is thus focused around two aspects:

Moreover, China possesses the largest foreign reserves in the world, with almost $3.3 trillion of reserves, i.e. almost 23% of the total foreign reserves owned by the leading 35 countries. The leading powers in terms of foreign reserves are, respectively, China, Japan, Switzerland, Russia and India. A little bit like with the United States before Bretton Woods, the gold stocks are following the same trends in these countries in the eastern hemisphere.

THE LIMITS OF MONETARY AND BUDGETARY POLICIES 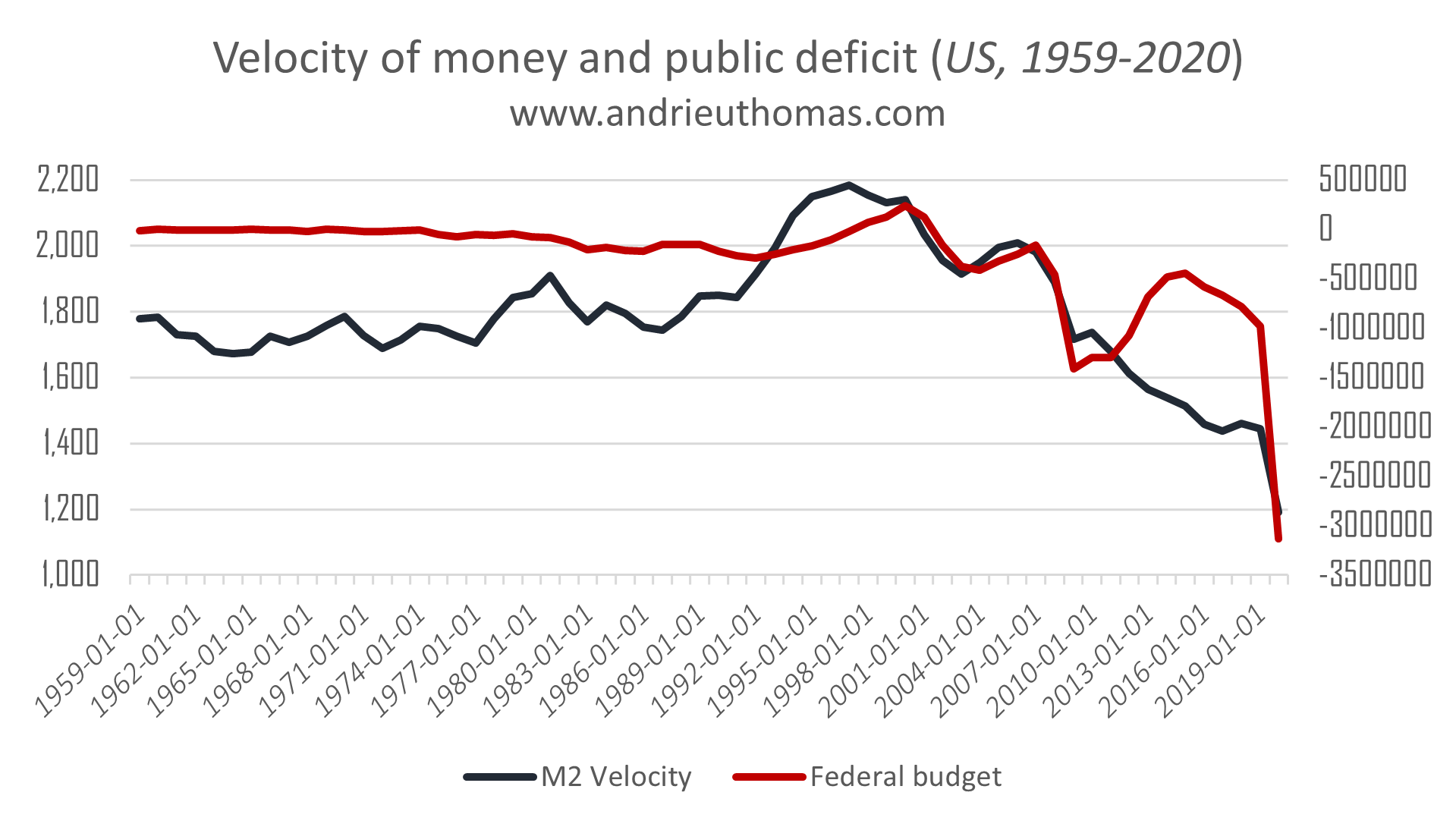 The current dynamic of chronic and gradual deficits, and massive monetary creation, will not be sustainable for 15 more years. Major limitations on the current monetary equilibrium are appearing. The chart above shows the extremely strong correlation that exists between velocity (the use of the currency, or its speed of circulation) and public deficits (the red curve). Thus, in the last 20 years, the speed of circulation of the dollar has fallen by almost 50%, whilst the federal deficit increased by more than 2000% between 2002 and 2020!

A fall in velocity is a major characteristic of the collapse of currencies over time. The simple reason for this is that a strong currency is one that is used. By creating ever larger deficits and engaging in ever more buying of public debt, nation states and the central banks are certainly threatening long-term monetary stability. Indeed, the fall in velocity is best understood when seen alongside various other trends:

One cannot help but reiterate that the loss of control over the budget is accompanied by a loss of monetary control in the long term. And that no monetary system has ever survived its own flaws. The governments and central banks have crossed a point of no return, meaning that structural reforms to our monetary system are inevitably going to be required. Judging by the previous cycles, said reforms should become a necessity before the next 20 years are out. There is an urgent need to anticipate an overhaul, in the long term, of the international monetary system.