The rise in wholesale prices now exceeds 13% in Germany in the month of September, something not seen since 1974. 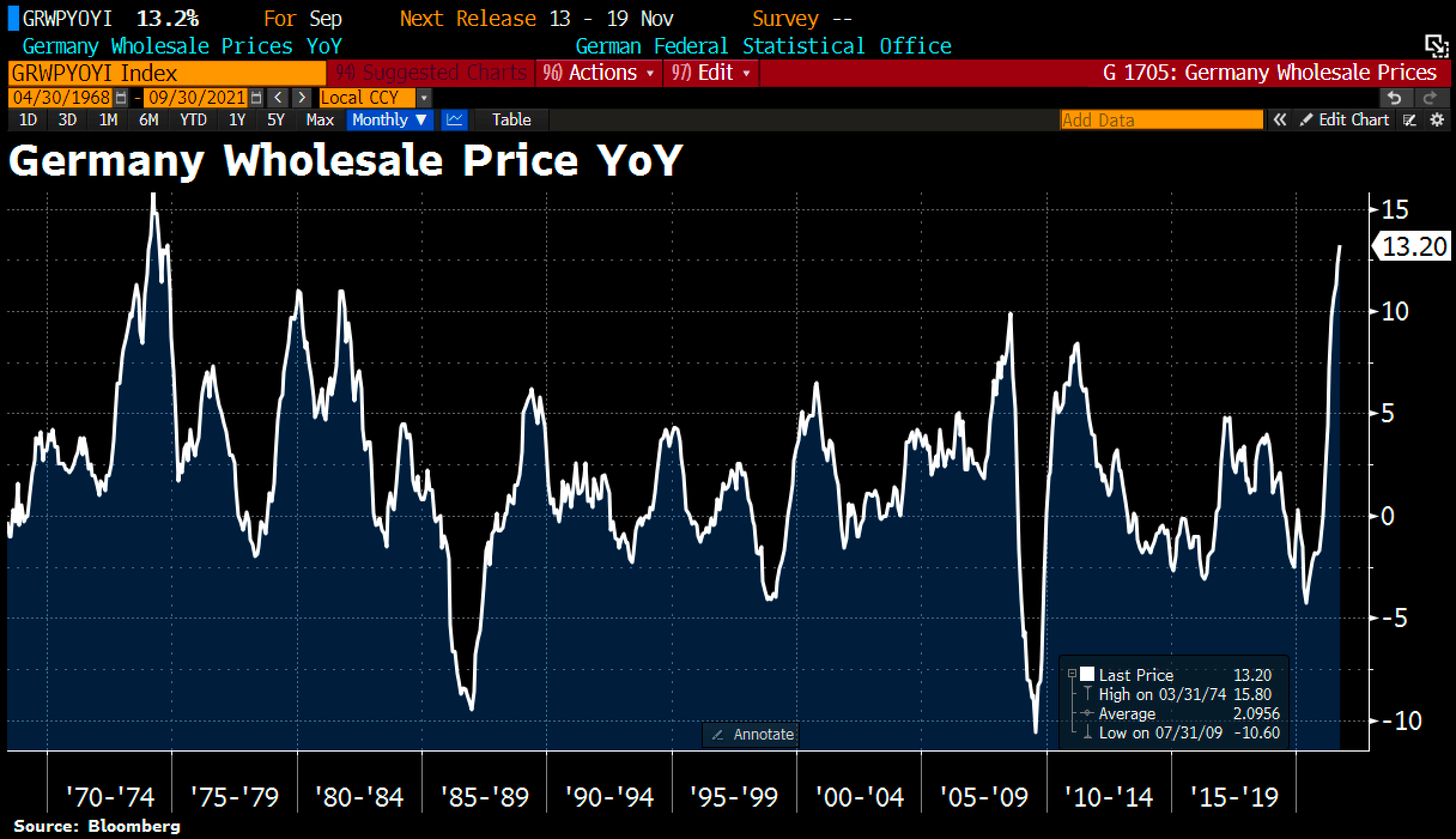 The spread of inflation, anticipated in these articles for several months now, is accelerating.

Inflation is continuing to be driven by the rise in energy costs and the rise in the prices of commodities.

It is now the turn of fertilizer prices to undergo a spectacular rise, one that now exceeds that of 2008: 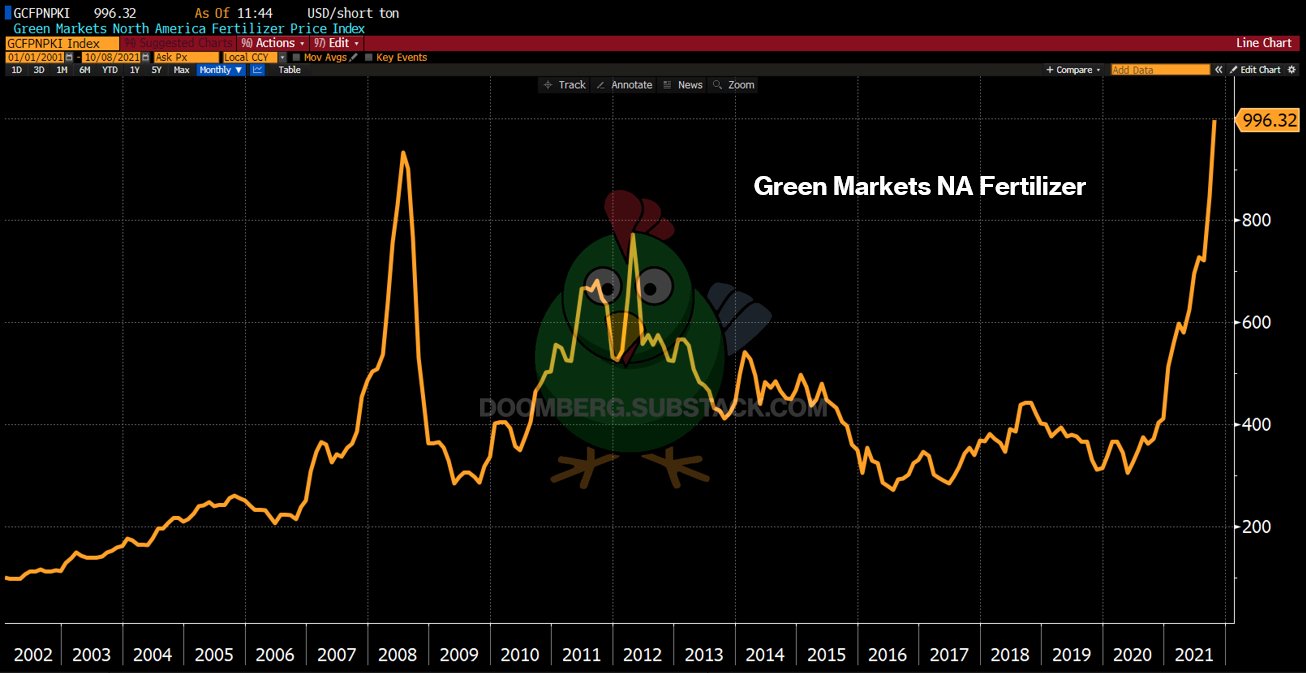 The rise in energy prices and the price of fertilizers tells us that we are set for a spectacular rise in food prices in the coming weeks.

Moreover, the rise in prices for some agricultural products is starting to have knock-on effects on the food production chain. The phenomena of shortages that began in the industrial sector in September are now affecting this sector. In Colombia, the brutal rise in coffee prices has already created malfunctions in the production chain, leading to supply disruptions, according to the National Federation of Operators. I have talked about it a lot in my articles: the spread of inflation to food prices is the most troubling effect of this monetary madness. When one looks at recent history, one cannot help but note that it is these price rises, specifically, that have brought about major conflicts, particularly in the Middle East (the Arab Spring being merely the most recent such episode).

In the United States, the rise in energy costs is less sensitive than it is in Europe, but a phenomenon of contagion is in the process of taking effect in this market too, particularly with regard to natural gas prices. These rises, which are still as lasting as ever on commodities, are having an effect on the price indices and on the price levels for goods paid by consumers.

The dizzying rise in used vehicle prices is back with renewed gusto in the United States, a consequence of the shortage of components that has caused a drying up of the supply of new vehicles. 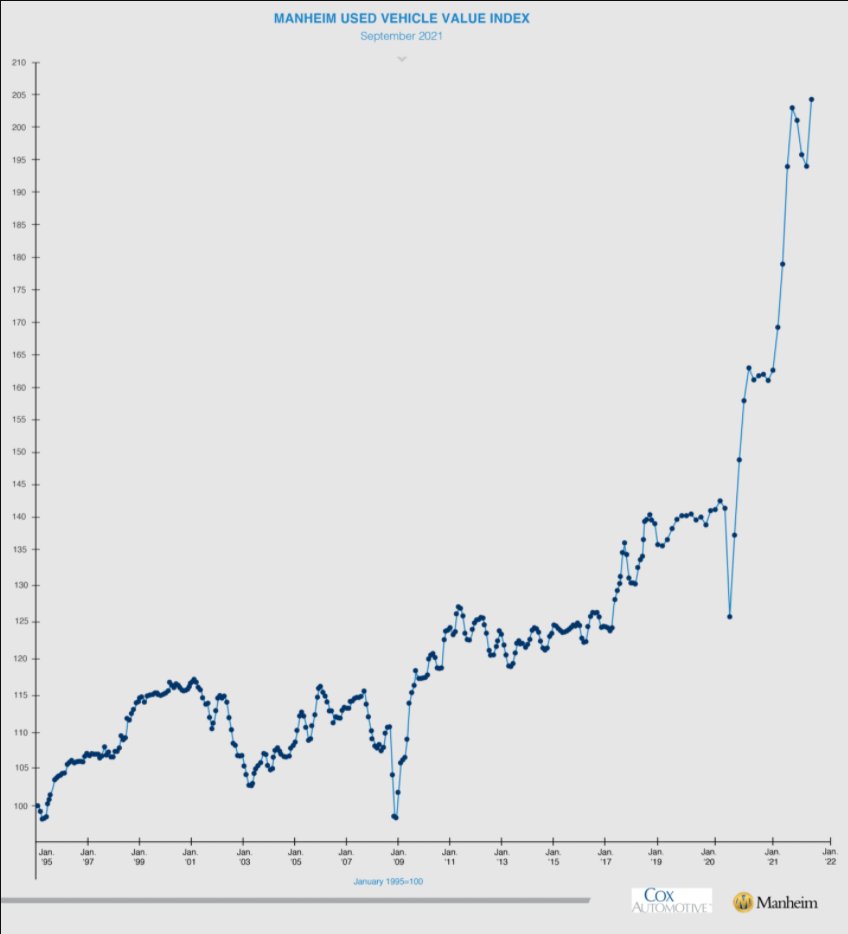 Staying in the United States, the real estate sector is sending out mixed messages, but these messages are ultimately fairly logical in this new stage of inflation that we are living through: 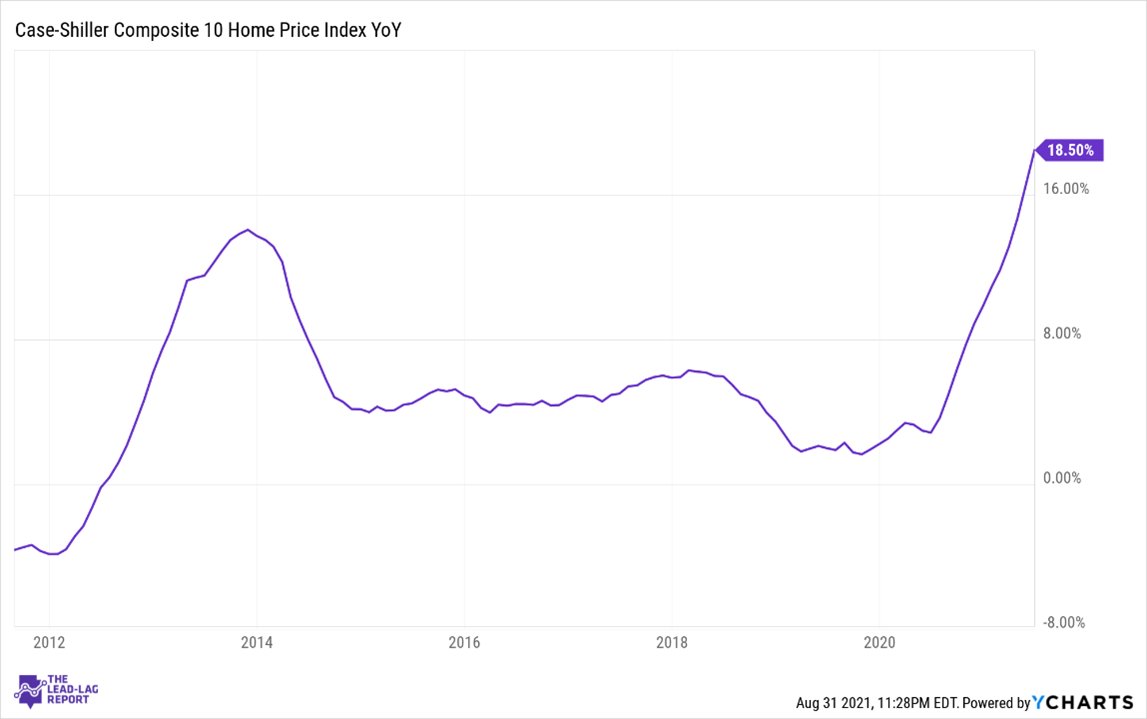 ...and requests for permits to build have even started to climb once again: the maintaining of low rates and the fear of price rises are encouraging developers to go ahead with real estate projects, whatever the cost...

But the shortages and the difficulties with supply are starting to have a negative impact on the deliveries of new homes... 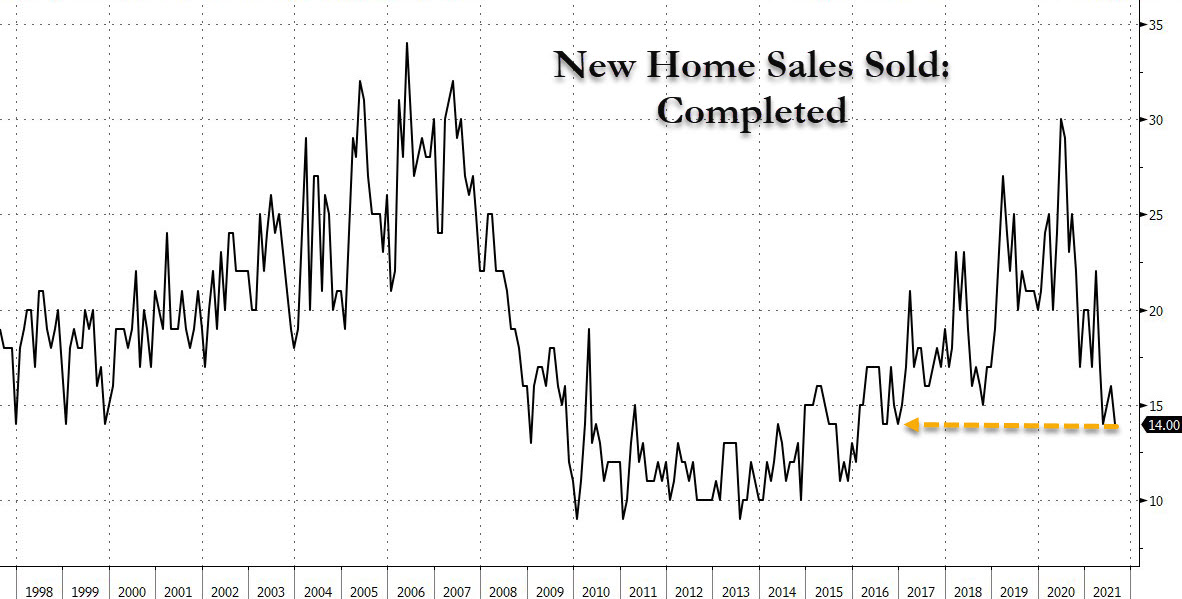 The drying up in supply is linked to the effects of inflation and not to any lessening of Americans’ infatuation with the dream of home-ownership.

New homes are in the process of becoming a luxury product. The level of prices is starting to have a discouraging effect...which has nothing to do with the level of demand.

Everyone dreams of driving a Ferrari, and yet sales of luxury automobiles are not soaring! That is what’s starting to happen with certain consumer goods, which are gradually becoming inaccessible.

We have entered the cycle of stagflation, which combines a continuous rise in prices and a slowing down of economic activity, precisely because of these sudden losses of purchasing power.

In Germany, the slump has in fact been very marked in the last few weeks. Germany appears to have entered the stagflation phase even more rapidly...orders are falling sharply (particularly in the automobiles sector): 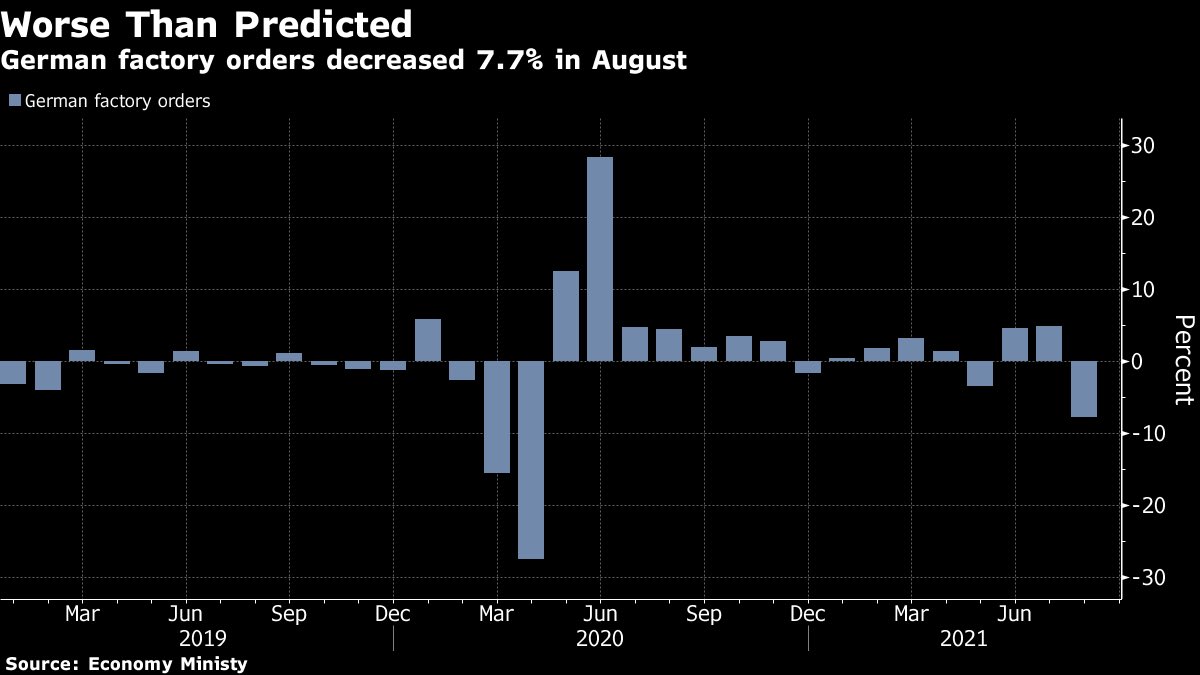 There are several reasons for this spike in German stagflation.

With its one-of-a-kind energy policy, Germany has made its industrial sector far more sensitive to the shock of the rise in the prices of electricity and natural gas. The country is suffering even more acutely from the rise in energy prices.

Germany is also more exposed to the economic downturn in China. It has become a true barometer of Chinese activity: the German figures are a far more precise indication of what is really going on in the Chinese economy, which is currently experiencing a very significant downturn.

China, the world’s second-largest economic power, currently has all eyes on it because of the spreading of the bonds crisis due to the collapse of Evergrande. The credit risk is now spreading to China’s bonds: 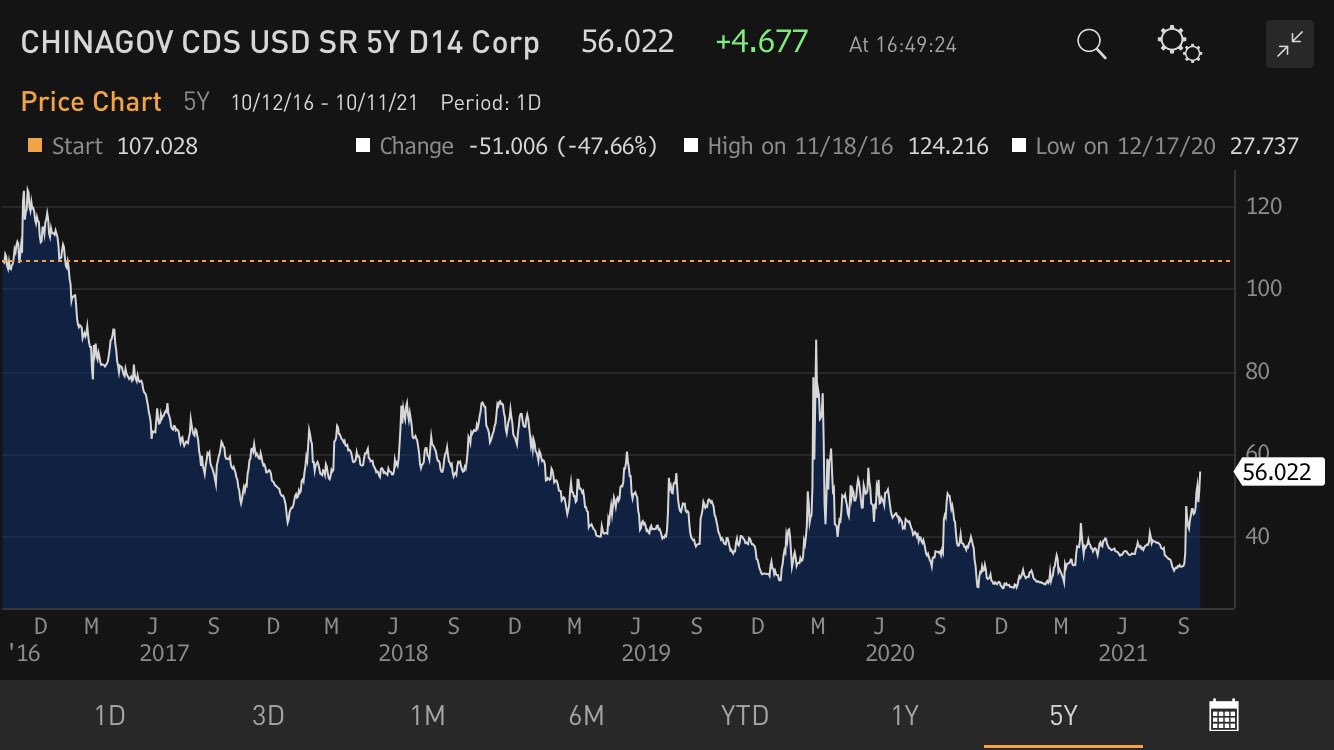 The most damaging thing would be if it were to spread to the global bonds markets. In the current context of high inflation, it is one more threat to take into account in the rate monitoring program put in place by the central banks...

By having decided to continue with their interventions in these markets, the central banks are likely to have their work cut out for them!

They can undoubtedly hope to see the prices of certain commodities come back down - such as natural gas, which is currently at unstable levels in relation to the level of supply.

With regard to certain other commodities, though, the controlling of prices by the futures markets risks being a perilous task.

With regard to metals, in particular, the levels of stocks do not permit a strong correction to prices in the short term. Copper, for example, is at dangerously low levels in the Shanghai futures market. The stocks on the LME are also falling rapidly. 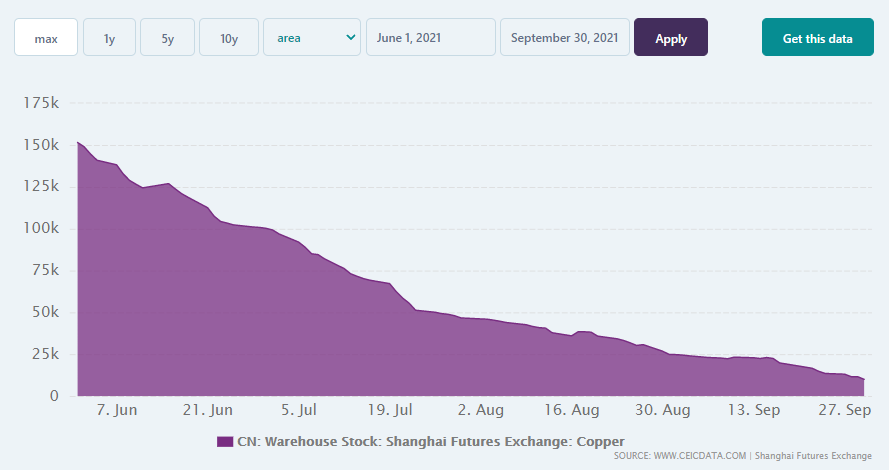 On the silver market, the premiums are rising quickly again and the supply times for large orders are getting longer as well. This is a clear sign of tension on the levels of stocks.

On the Comex, the Open interest has gone back below the levels seen in the spring of 2020. The commercials have once again significantly reduced their short positions, taking advantage of the funds’ sales of speculative positions. 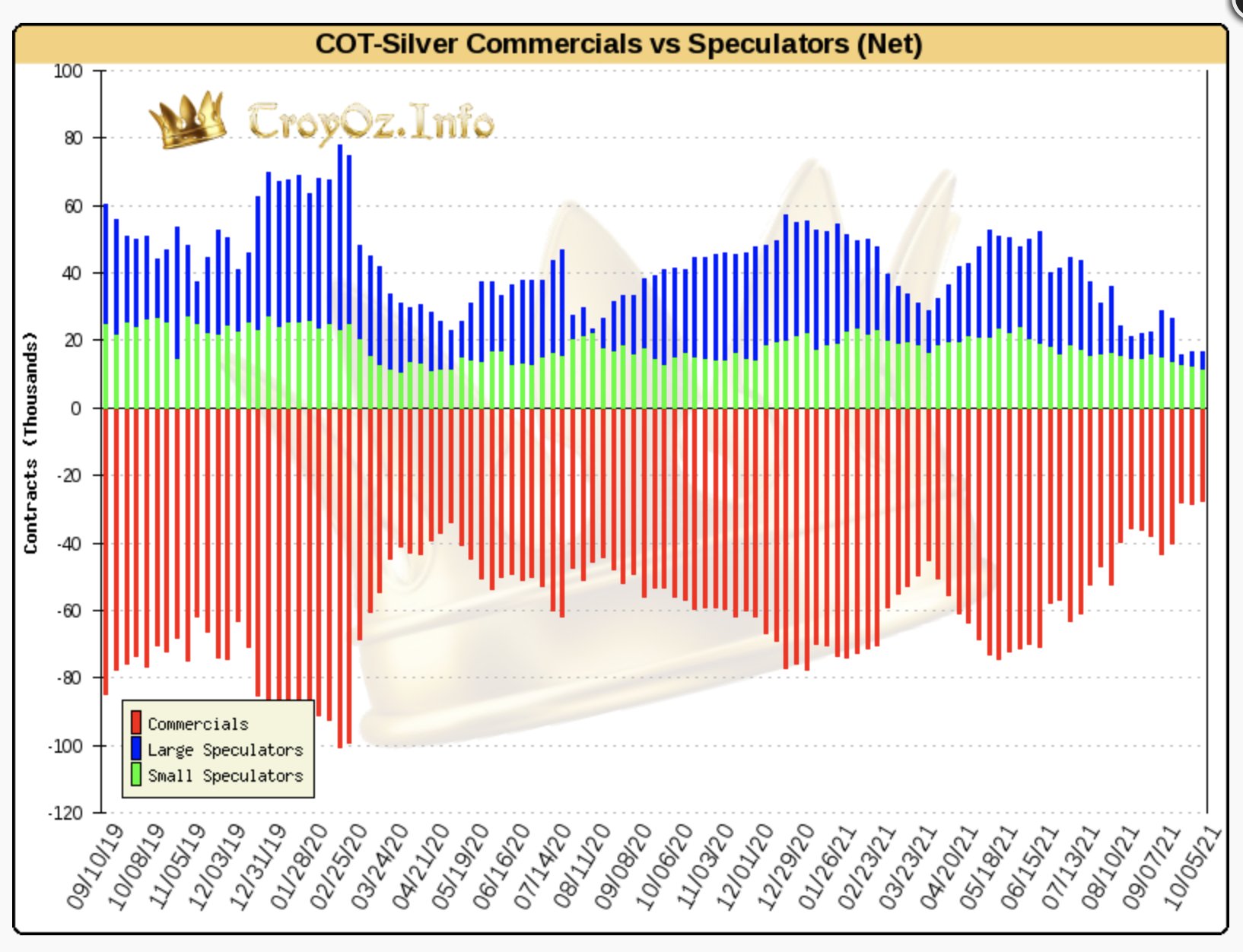 In the past, these levels have always represented significant lows for the silver spot price.

The physical demand is not allowing gold to appreciate, not least due to the selling action of numerous funds on the futures market.

The gold spot price is currently being kept low by speculators, who are playing on the inverted correlation of gold compared to the yields and to the dollar on the futures market. Almost 70% of the customers questioned by the bank JP Morgan are bullish on the dollar in the short term, and this is not improving the negative sentiment about gold at the start of the current quarter.

As these new “shorts” enter the futures market, the commercials are continuing to reduce their short positions. 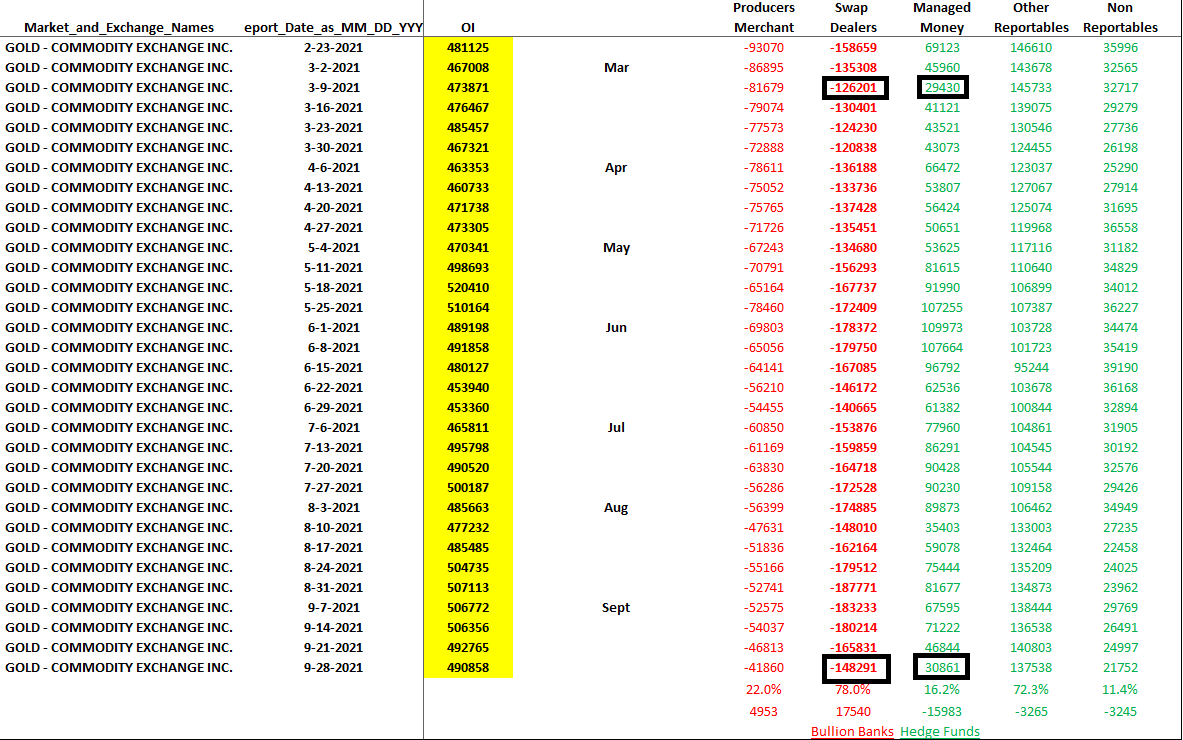 On the charts, the Gold/SPX chart is, in any case, in the process of ‘working’ the two-year resistance, having pierced its consolidation trend initiated in August 2020. As a reminder, this chart is on a target level of a highly bullish harmonious figure, which should lead to gold outperforming the indices significantly as soon as our famous horizontal resistance is breached. 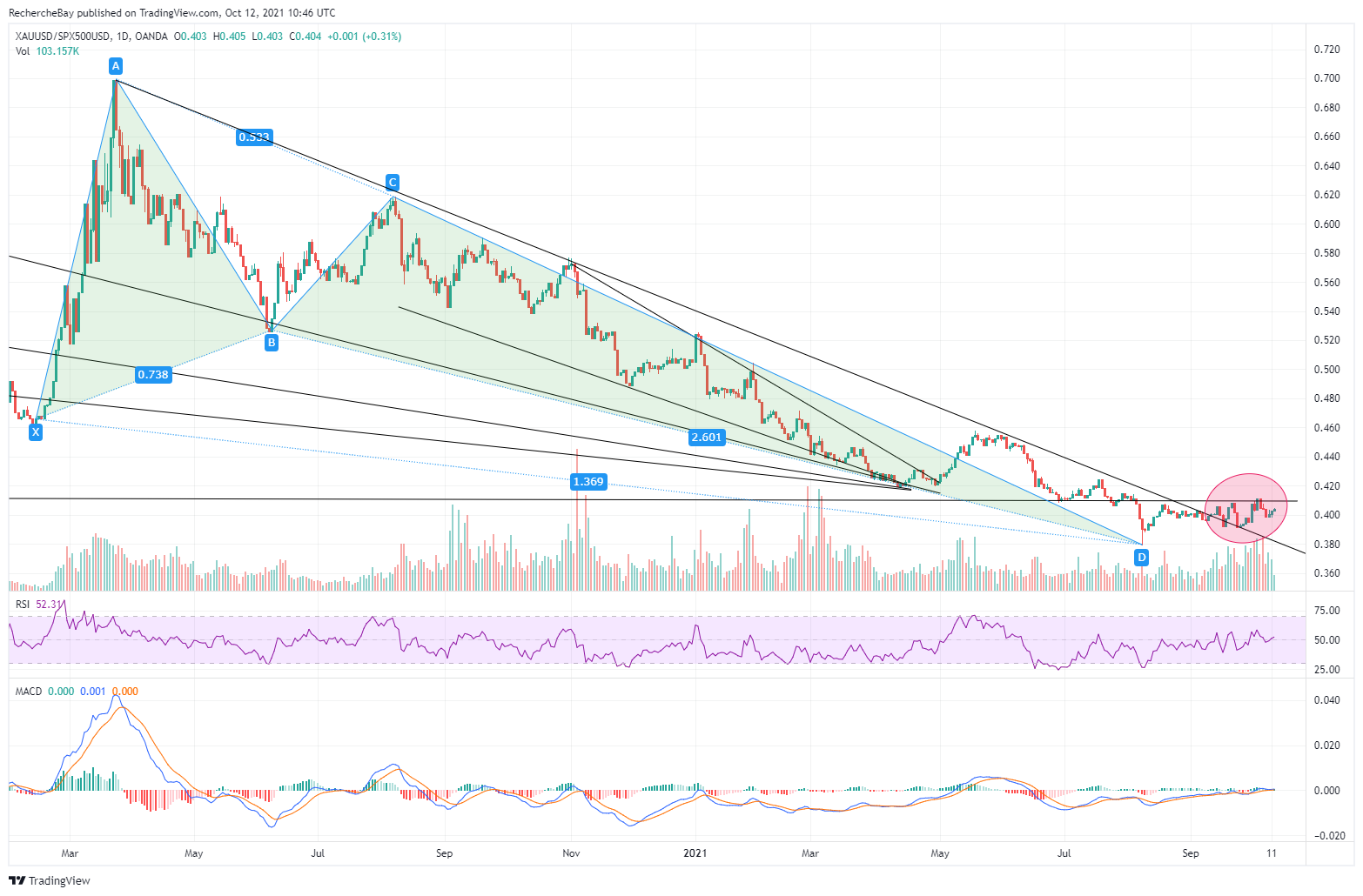 This configuration remains very favorable for the accumulating of equity in mining companies. The action on the stocks that I am monitoring is, in all cases, characteristic of this phase of accumulation.