Sales of U.S. Treasury bonds are accelerating. After foreign sovereign funds, it’s now the turn of the Hedge Funds, which sold a record amount of more than $100 billion of Treasuries in the first two months of this year. Sales of Treasury bills by the financial institutions registered in the Cayman Islands (well known as a haven for many of these Hedge Funds) totaled $62 billion in February and $45 billion in January.

Sales of U.S. Treasury bonds by the foreign institutions are at their highest level since 2018, at precisely the time when the U.S. central bank is accelerating its asset buyback programs.

Faced with these enormous sales, the Fed is buying these same short maturity bonds back, at $80 billion per week: the U.S. central bank is in the process of swallowing up not only most of the bonds currently being issued by the Treasury, but is also buying back assets that increasing numbers of funds are hastily selling, in a debt monetization operation of a magnitude never before seen in the United States. 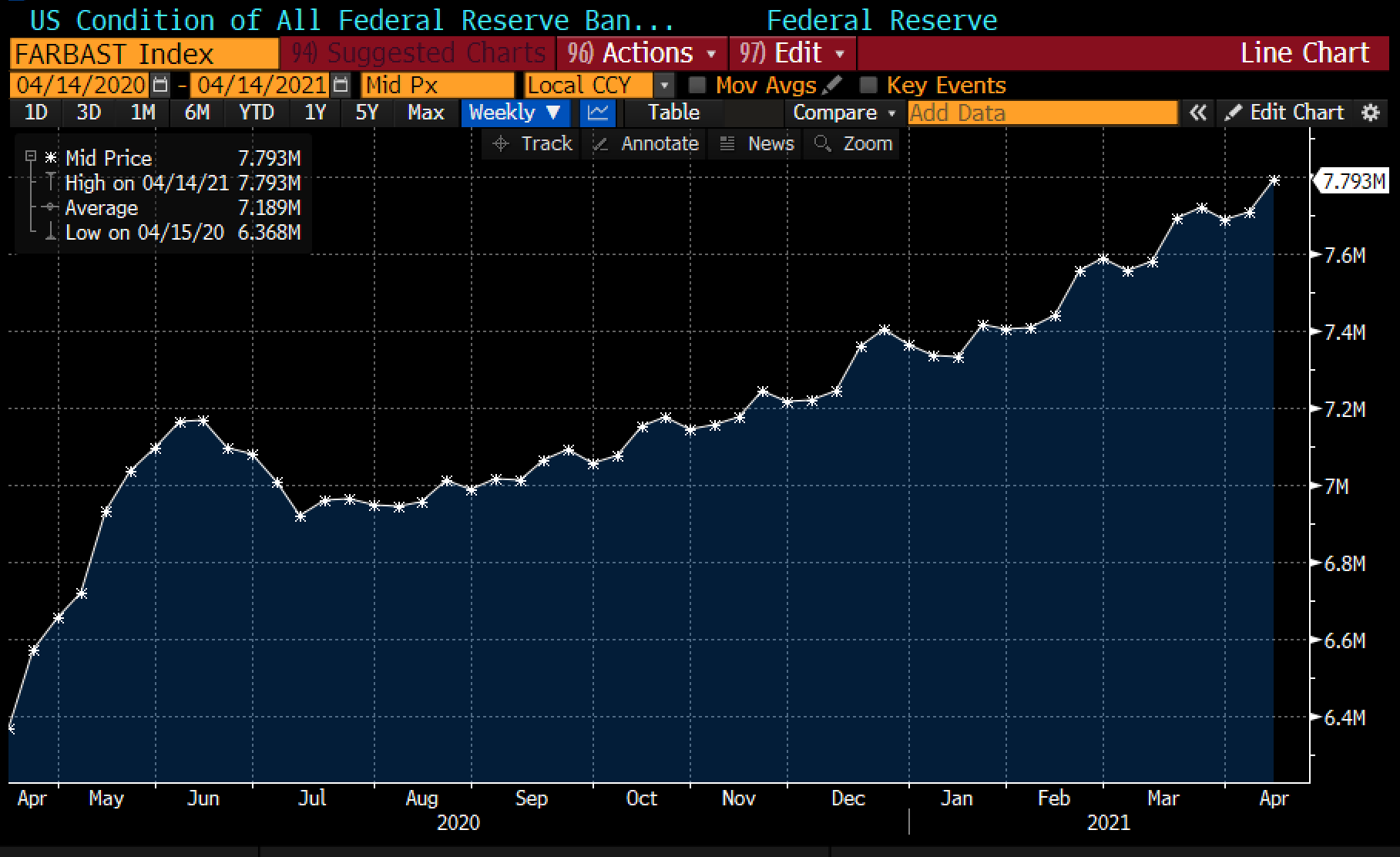 This accelerated monetization, which has been coupled with logistical problems linked to the aftermath of the ongoing crisis, is having significant repercussions on the price of commodities.

These sudden price increases are starting to have concrete effects on the real economy.

The automobile market has been hit by delays in the parts supply, and this is slowing down production and making delivery times longer. This disruption to the supply chain of new vehicles is leading to a resurgence in the used car market in the United States, which is recording record sales this month: though this market dived during the latest recessions, it has been performing at an historic high for a year:

A consequence of this: the brutal rise in the price of new homes is putting the brakes on the Americans’ rush towards new real estate, with the University of Michigan’s Consumer Sentiment Index, in this specific sector, starting to fall again. The hike in prices is discouraging new potential players in the housing market from building new homes. 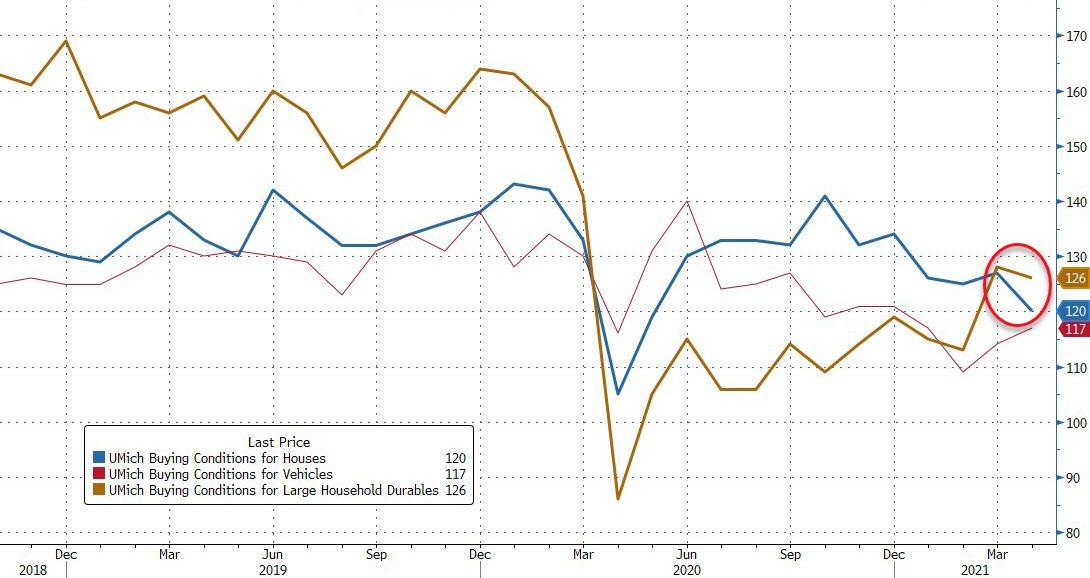 We are thus arriving at a crucial threshold in these monetary interventions. The Fed can stimulate the resumption by buying back assets, lowering rates, and distributing cash to consumers as part of a concerted effort with the Treasury. One might well wonder, though, how it is going to be able to solve this specific problem associated with the increase in prices caused by its monetary policy in real life.

The Fed can’t print construction lumber, after all!

It can do nothing against a brutal change associated with this increase in prices in the production chain.

The manufacturing process, from the commodity to the consumer, is a consequence of just-in-time operations whose equilibrium is very fragile and very sensitive to the slightest rise in prices; inflation is a vicious phenomenon that acts upon a precise area within this chain, and that is capable of derailing the entire cycle. It is fairly difficult to anticipate, particularly in our European economies, subject as they still are to strong deflationary pressures.

How can we predict the impact of a rise in the price of a commodity when we’re still battling with lackluster demand?

Let’s take the example of a new housing program in France, for instance. The classic risk management tools only concern interest rates, insurance cover for the professions involved, subcontractor evaluation... The operators in this market have never been through periods of sudden, dramatic inflation in the price of materials. Who could have predicted, last year, that there would be a tripling in the price of construction lumber? How can we evaluate, in a construction project, the risk of a double-digit hike in the price of aluminum, steel or even PVC? After metals, this week we are also seeing sharp rises in the price of resins and hard plastics: 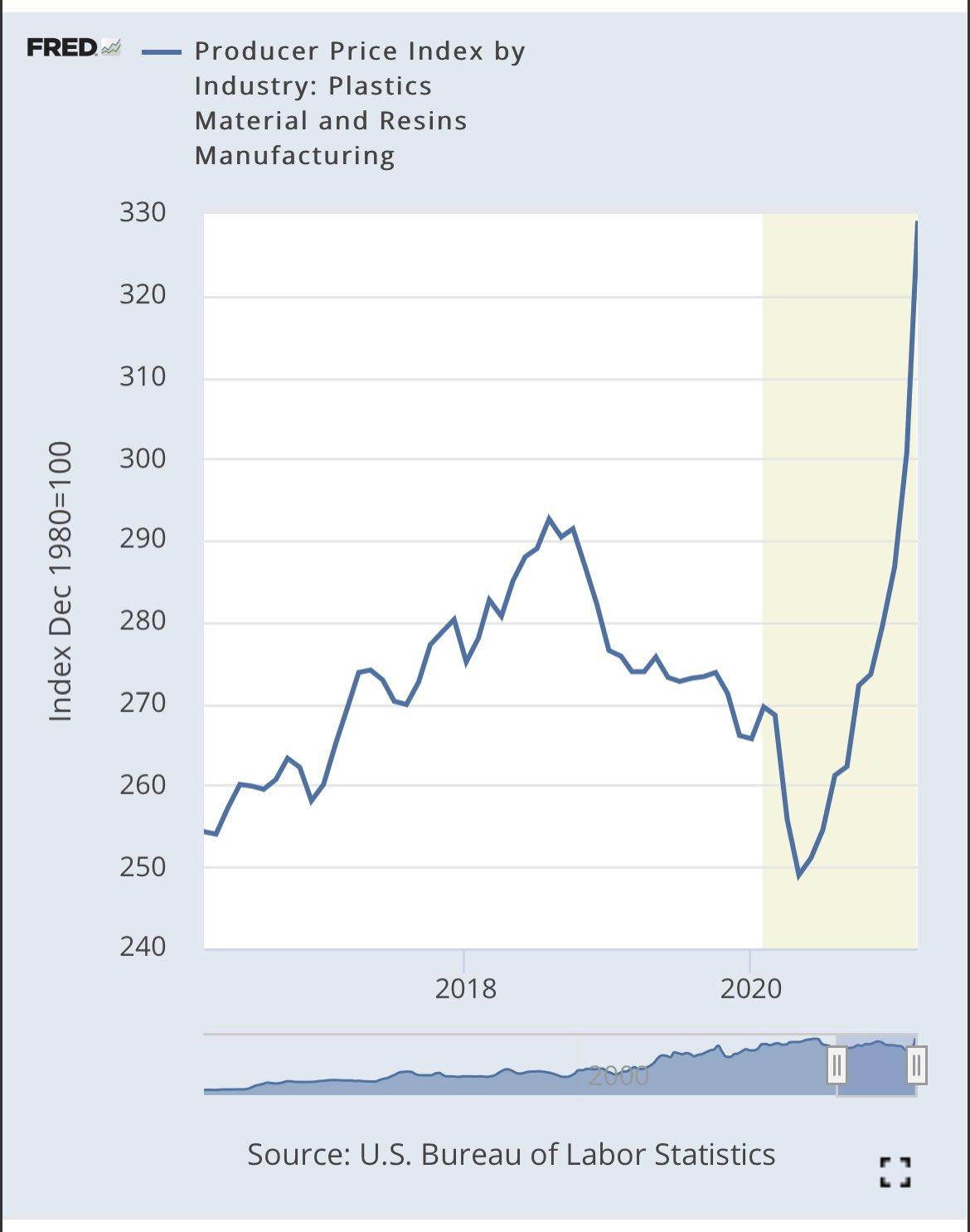 How can we absorb this rise between the start of the project and delivery, knowing that the signature constraints in our country preclude the possibility of passing on a big rise in these construction prices to the end customer? This new inflationary environment, disconnected from the physical demand and resulting essentially from a monetary event, is having direct consequences on the actual functioning of the economy; is that something we’re adequately prepared for? Do we have enough tools for managing inflation-related risks to be able to face up to this new economic era, or is demand no longer the only parameter?

It is all the more difficult to anticipate this new inflationary environment when we are mired in problems linked to the public health crisis, particularly on this side of the Atlantic.

One of the major challenges that the central banks are going to have to confront concerns precisely this differential in the economic recovery in different parts of the world. The recovery is now well under way in the United States, as attested to by the demand for gasoline, which is at its highest level since the crisis began: 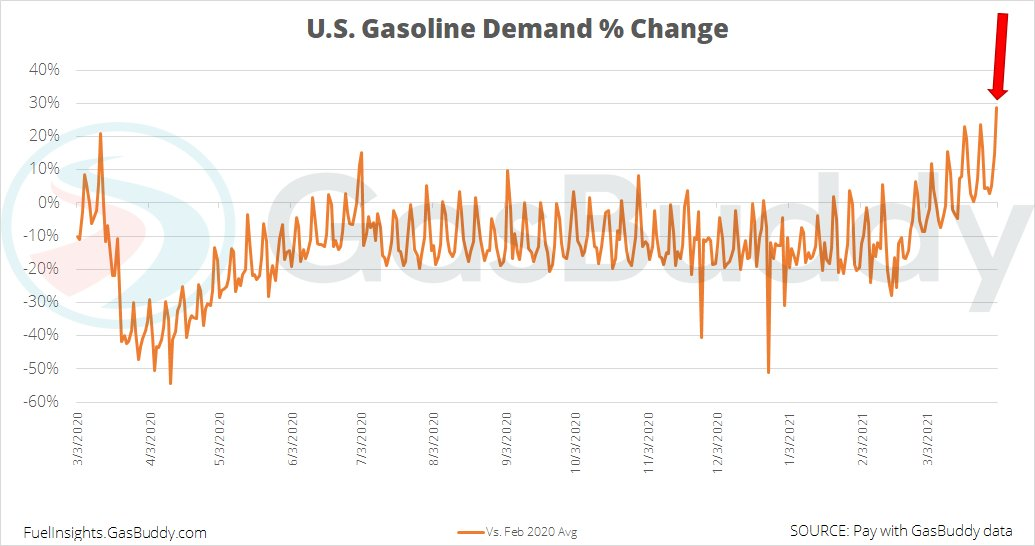 Europe, for its part, has made a complete hash of its vaccination campaign. And in Europe, France is currently the country that is more bogged down than any other as it attempts to recover. There is a price to be paid for that. The country’s debt is currently the largest in Europe. We are continuing to spend the money that our economy hasn’t been producing for a very long time now. 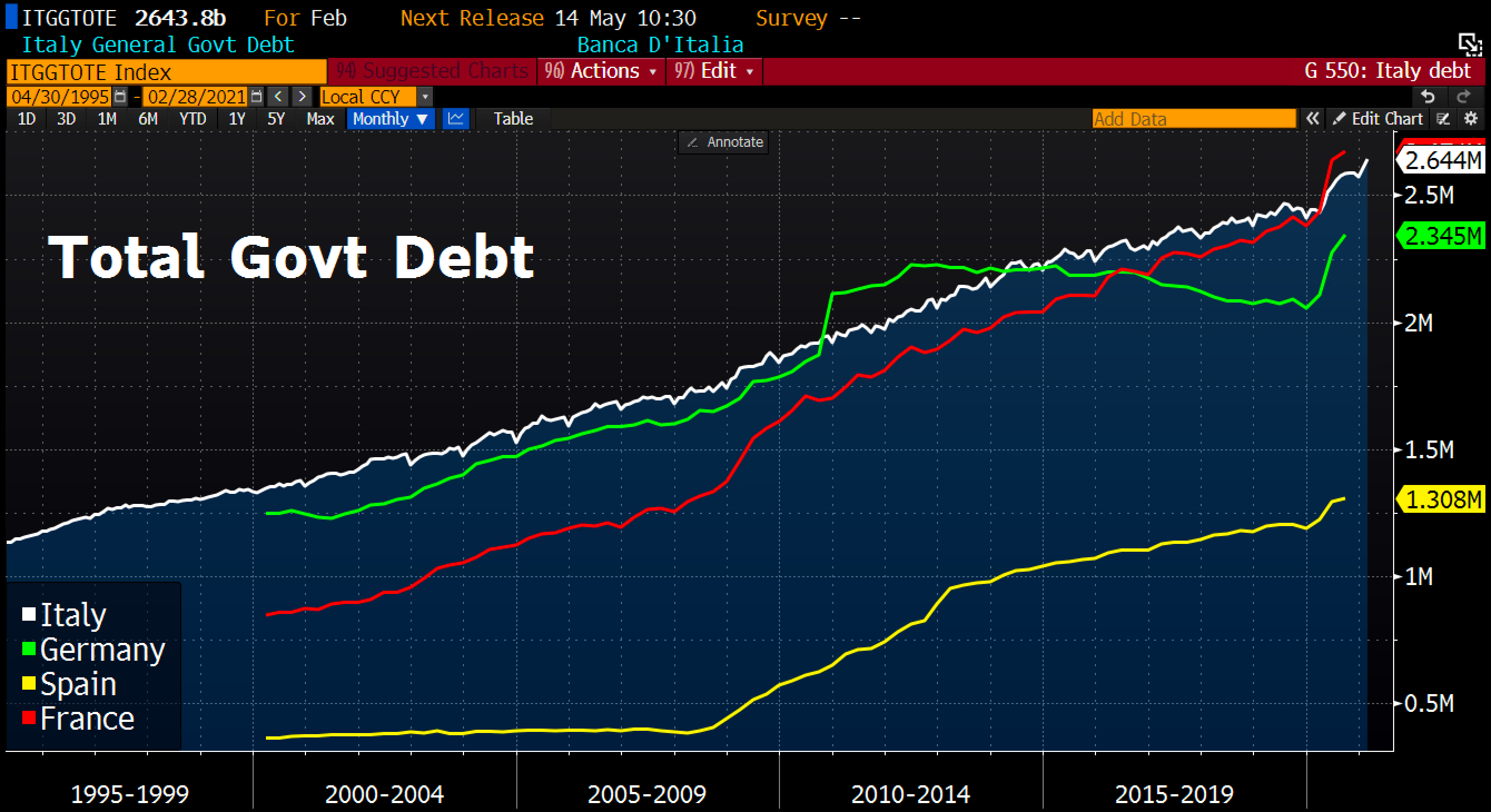 France is going to have to plead, before Brussels, for an extension of the one-off measures linked to the sanitary crisis, which will likely last all summer in our country, even though numerous developed countries have already restored the economic environment that existed in the pre-Covid days.

Under these circumstances, how can the fiscal and monetary policies be harmonized with so much disparity right in the heart of Europe?

There is an even bigger challenge facing these central banks, however. 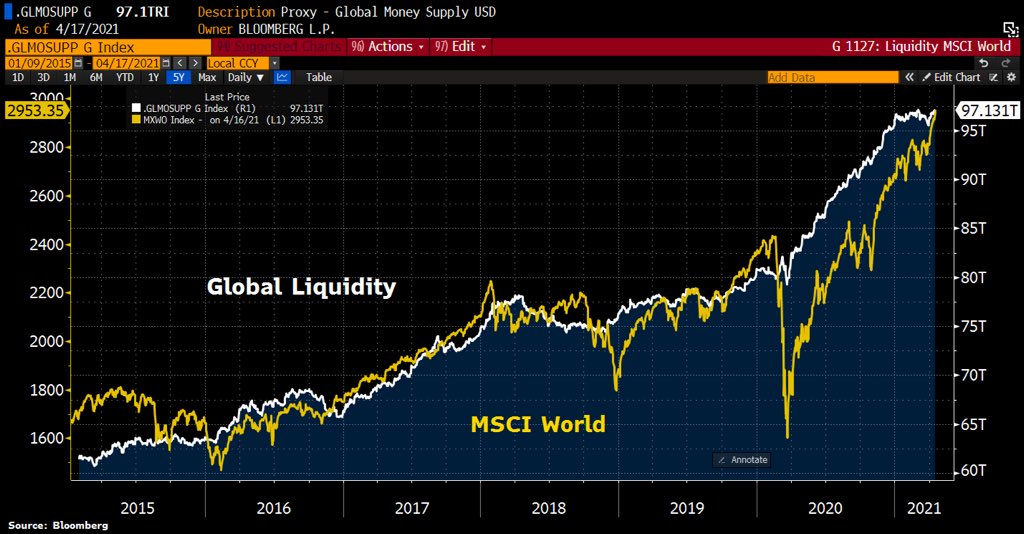 The central banks are now confronted with the challenge of having to contain the excessively brutal bursting of this financial bubble; they must also prevent these liquidities from parking themselves too quickly in tangible assets, something that would accelerate the process of inflation still further. Paradoxically, it is clear to see that the more disappointing companies’ results are in the future, the more the bursting of this asset bubble will be able to fuel other sectors that are beginning their ascent, namely tangible assets!

It is not demand that is going to make the prices of the things we’ll need go up, but the transfer to the real economy of the inflation that is already ‘parked’ in the assets at completely artificial prices that will be passed on with varying degrees of violence in the months and years to come.

We therefore run the risk of seeing stagflation phenomena in Europe, and very slight inflation in other regions where the recovery is more sensitive.

To protect ourselves from these unavoidable effects of the monetary policies implemented for more than 10 years, now is the time for a return to tangible assets for increasing numbers of investors.

As of last week, China is authorizing the country’s banks to engage in mass importing of gold, thereby preparing a sizeable monetary reserve based on the precious metal.

The rush on metals applies to physical silver too. Since February and the launch of the Silver Short Squeeze, the COMEX silver inventories have been shrinking further and further: the market’s “Registered” category has lost more than 30 million ounces. That is 850 tonnes (1/5 of the stock) that has disappeared from the COMEX in barely 2 months.

This reversal of the situation is having a radical impact on the physical market, thereby further increasing the risks of a gulf between the ‘paper’ spot price and the actual price of the physical metal. This difference is measured by Patrick Karim’s excellent analysis of the “Premium vs Discount” differential, which I allow myself to reproduce below: 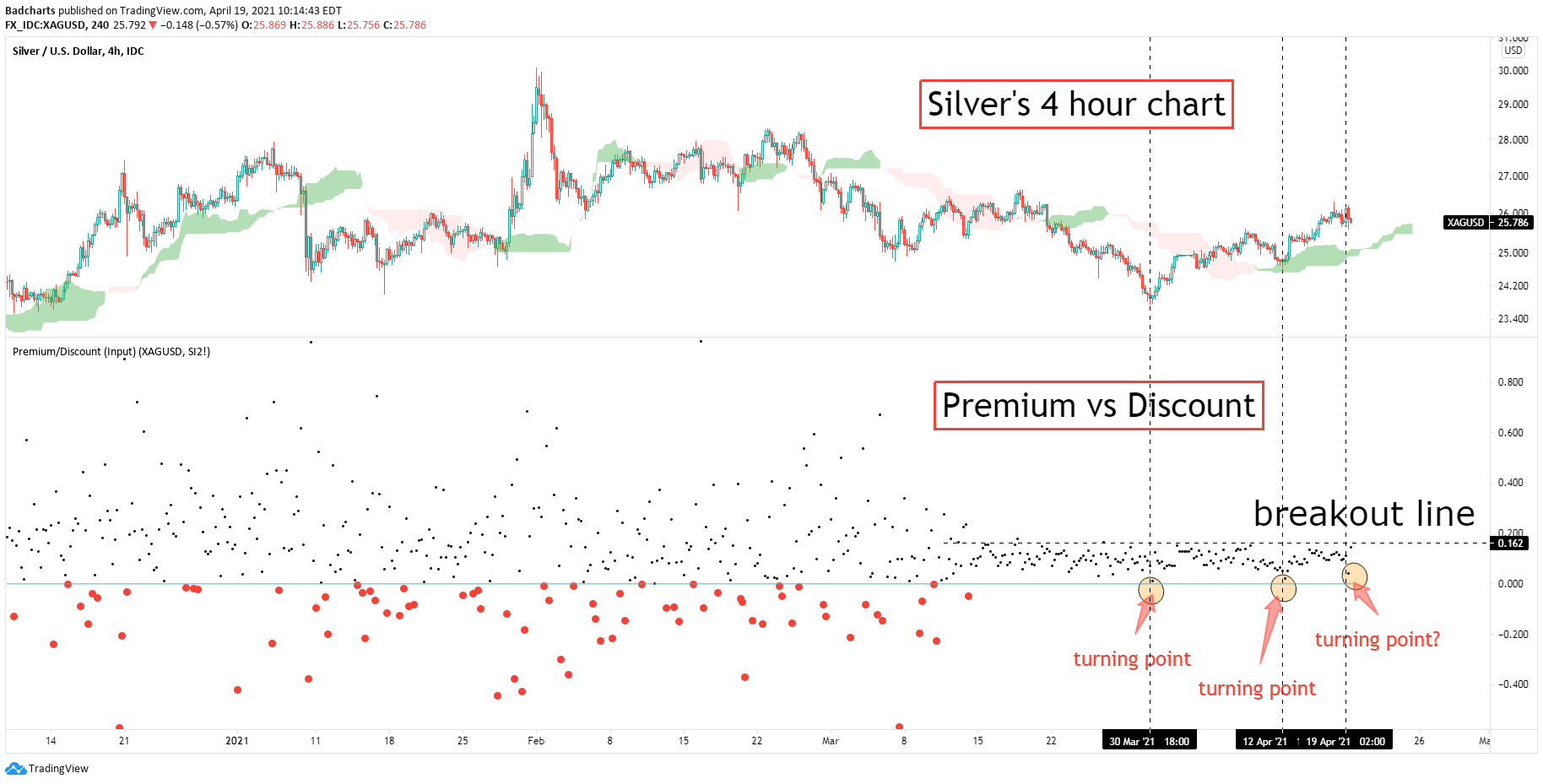 This transfer from the paper market to the physical market, at a rate of more than 35 tons per day, is in the process of building considerable momentum in the hike in premiums on the physical price of silver.

This hike in the premiums is sharply increasing the pressure on the brokers who hold the metals accounts allocated for their clients. Each hike in the premium encourages more physical deliveries (the prices of the premiums compensate for the delivery costs). And it’s in precisely these phases, when there is a disconnect between the ‘paper’ prices and the physical prices, that we can distinguish the ‘hard’ brokers, who actually hold the metal for their clients, from the financial operators who maintain a fractional system, whereby they take the liberty of re-allocating their own clients’ metal while continuing to charge them storage fees. Each time there is upward movement on precious metals, the same stories crop up again, with clients trying to get their metal back, and institutions being unable to deliver it and offering ‘cash settlements’ in place of hard metal.

Silver is very much in the media spotlight right now, because physical silver is at the basis of a vast fractional derivatives market with a record leverage effect in these precious metals sector. The current tension on physical and the very substantial leverage effect of this metal make it possible to put pressure fairly quickly on the slightest request for delivery from an operator in this market. Gold and platinum are also highly exposed to these derivatives markets, however, and the disconnect between the prices of the physical metal and the spot price are also starting to affect these metals.

The biggest broker in the United States is currently offering a $55 bonus for each coin of American Eagle gold that they buy.

This return to tangible assets is being accompanied by a return to reality for a large number of investors, who are discovering that the gold or silver they hold in their bank account is in fact merely a derived product, exposed to fluctuations in the metal, and that it is very difficult, in fact almost impossible, to convert this investment into physical metal.

This realization is not yet particularly widespread, because gold is not yet in the spotlight. In terms of the charts, whilst gold has begun its change of course, it remains nonetheless in a neutral zone, above its 50-day daily average and well below its 200-day average.

As for silver, it is more bullish, and is now above the 200-day daily average.

Mining stocks are on the point of outperforming gold, the GDXJ/GOLD index is seeing its strength tested, with a significant weekly MACD reversal (it is the first time this has happened since the start of the consolidation). 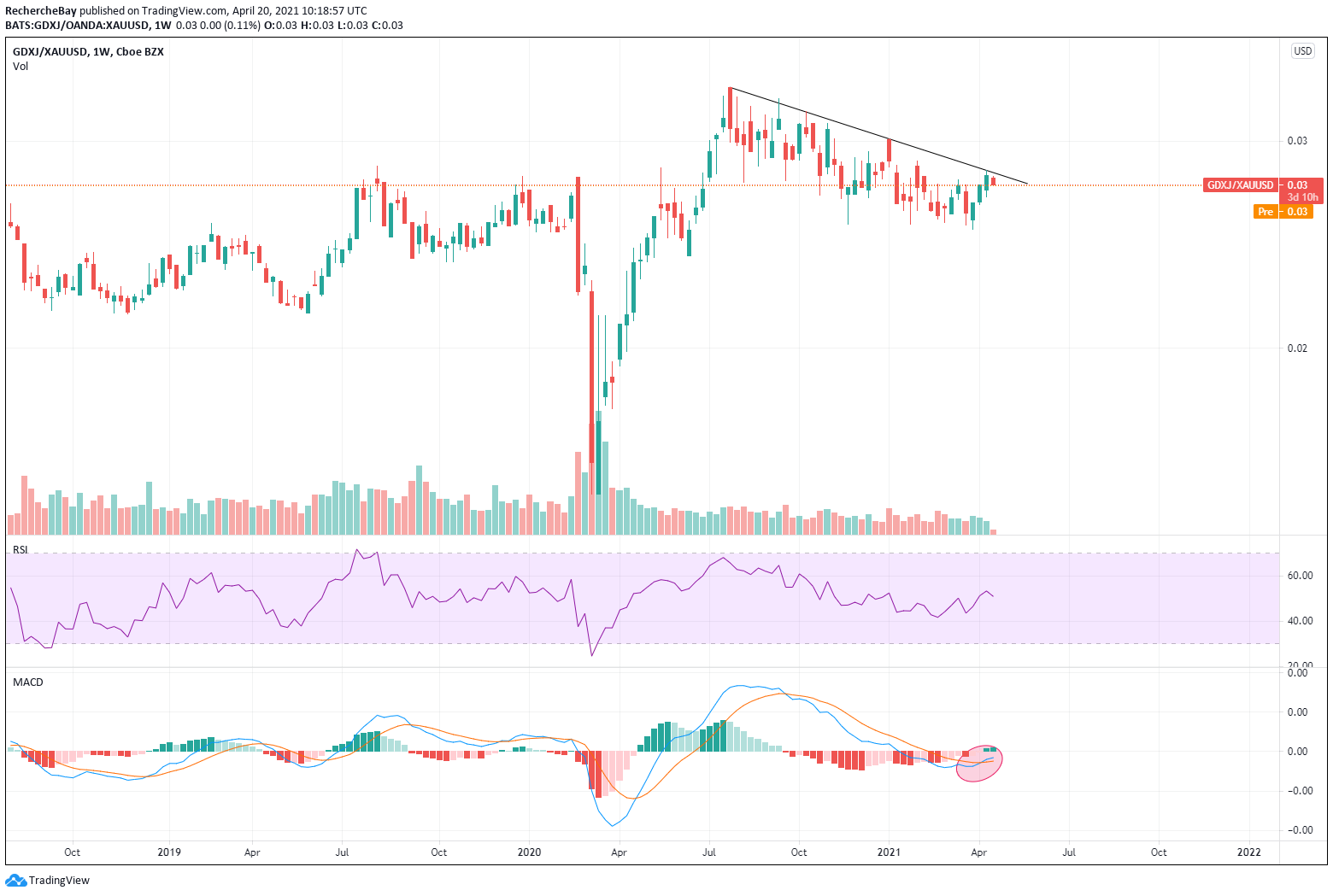 We find these short-term bullish indicators in most of our indicators:

Let us note firstly the upward divergence that has been formed on the GDX since March, and that has just led to the breaching of the consolidation channel: 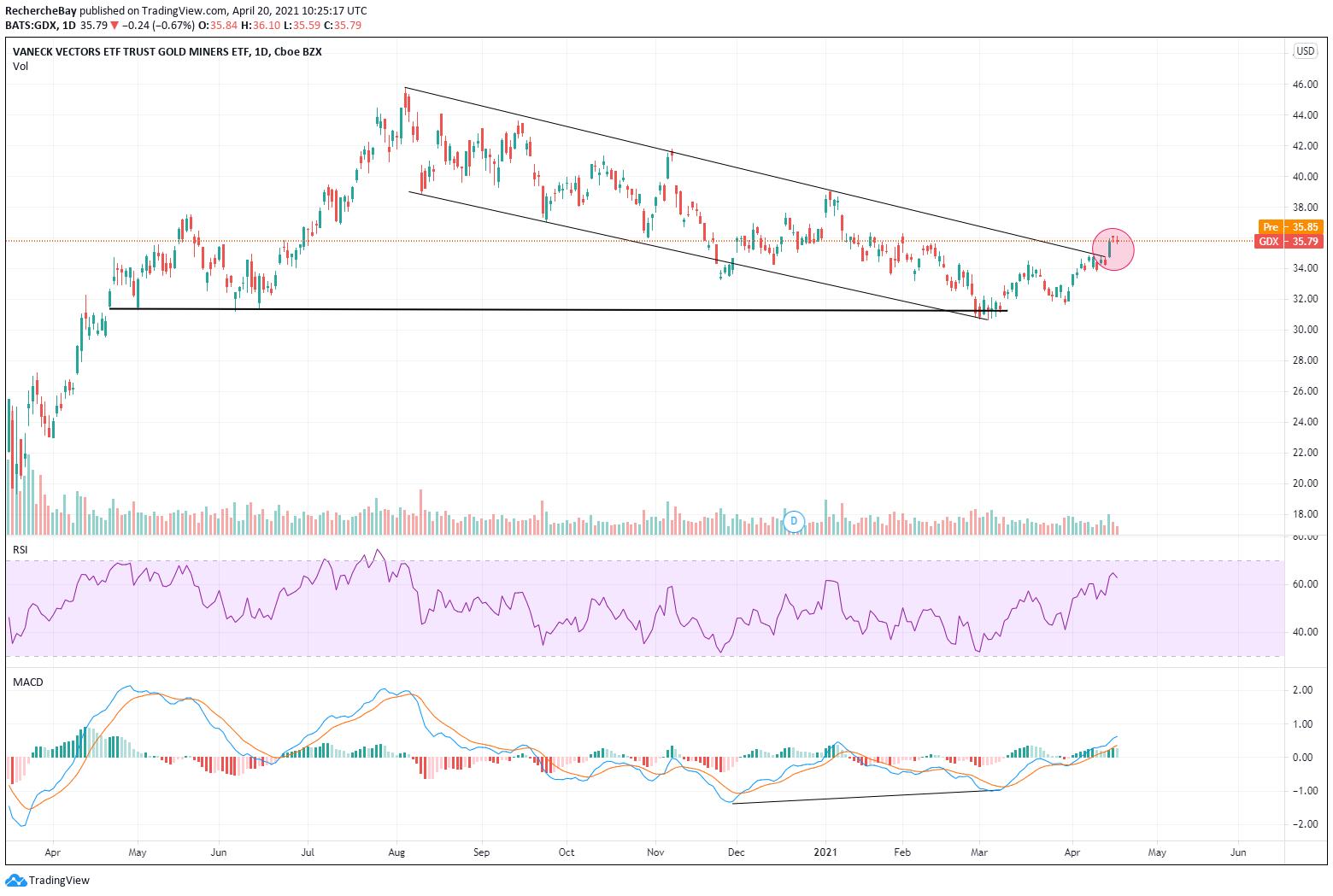 On the GDXJ, it’s the third time that the same consolidation vector has been tested. This time we have an upward divergence with the daily volume. 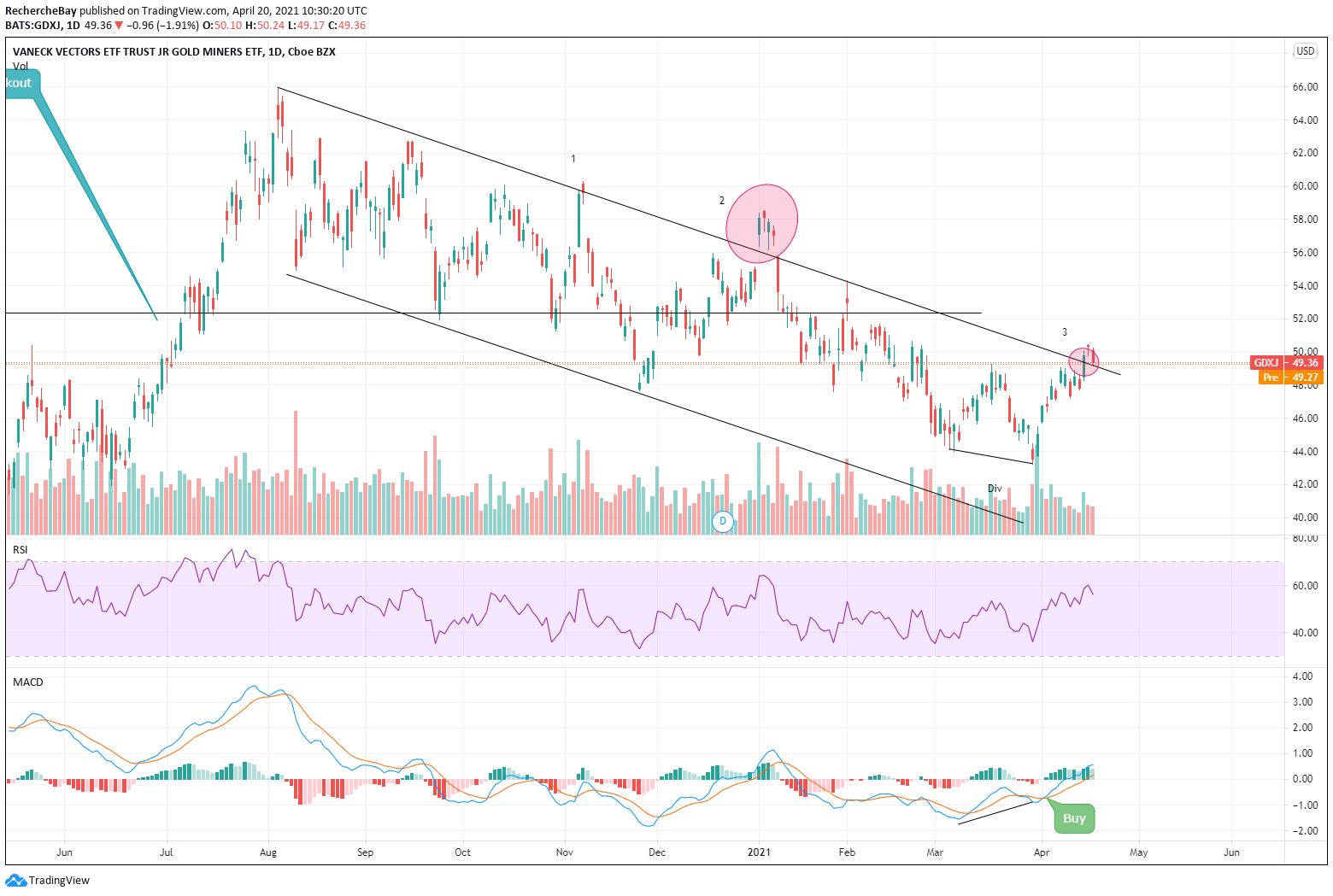 The next few days are very important for the mining stocks because they will confirm whether or not this channel breakout occurs.

It’s this signal that many of the mining stocks I monitor in my portfolio are waiting for, for a potential consolidation.