The latest figures on inflation published this year in the United States are at historic levels. The PPI index for intermediate goods has risen by more than 25% at the annual rate and that had never happened since 1974.

These figures are confirming each week that the inflation is becoming more and more established... at a time when the institutional funds have never bet to such an extent on it being transitory, according to a recent survey conducted by Bank of America: 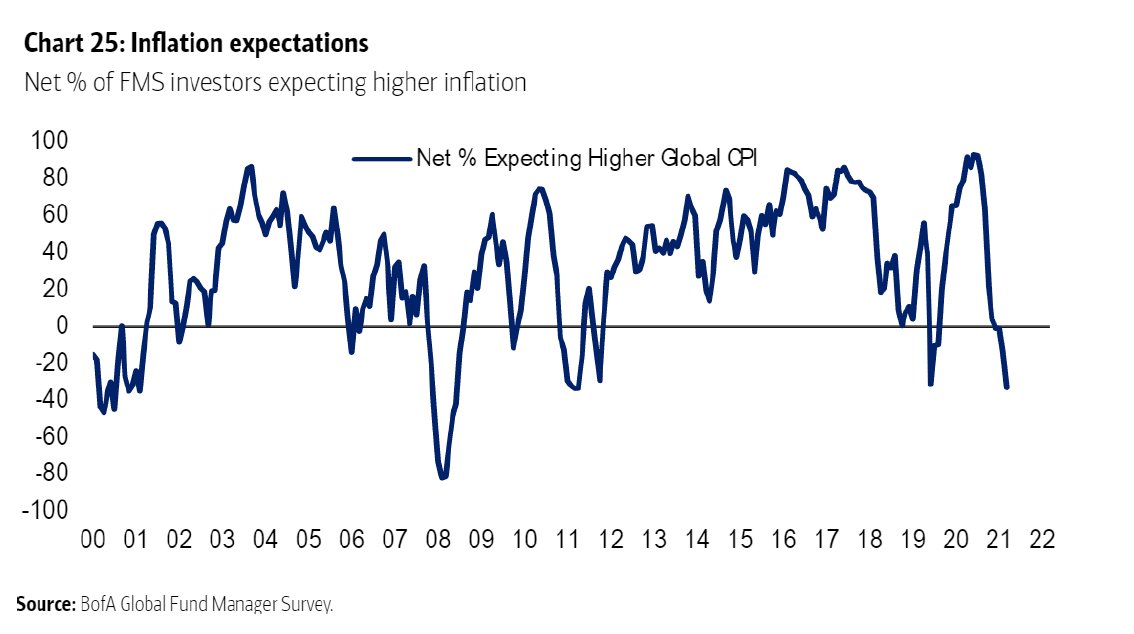 Never has the proof of inflation been so tangible, and yet increasing numbers of fund managers are betting on this rise in prices being transitory, encouraged, admittedly, by the reassuring narrative coming from the monetary authorities.

It is not the first time that the Fed has bet on its monetary policy having only a transitory effect. The last time this happened, the forecast turned into an absolute rout. Who remembers the Quantitative Easing program and its “transitory” effects on the size of the Fed’s balance sheet? And yet it wasn’t really all that long ago...

13 years ago, the Fed launched its quantitative easing (or QE) program, and 2 years later, in 2010, its chairman, Ben Bernanke, told the United States Congress that the Fed’s balance sheet would be brought below the upper limit (at the time) of $1 trillion (this same balance sheet is currently in the process of surpassing the $9 trillion mark...). That same year, James Bullard, a member of the Fed’s committee, promised that the exceeding of this threshold would be transitory. In 2014, the Fed laid it on thick when insisting on the transitory nature of the expansion of its balance sheet. And in 2017, the chairman of the Fed assured us that the reduction of the Fed’s balance sheet would be very straightforward and even compared the process to watching paint dry. Well, the paint is far from dry, for the monetary officials are constantly laying it on thick! Today, one can see that not only has the monetary expansion never been transitory, but, on the contrary, the increasing of the Fed’s balance sheet has really accelerated over the last 13 years.

The same economists from the Fed who promised us transitory quantitative easing are telling us, today, that the inflation is transitory too.

This time, though, continuing to talk about a transitory effect risks having consequences if, by some chance, the Fed’s forecasts were to be contradicted by the facts.

Uncontrollable inflation would call for a complete redefining of the portfolios of the funds that are continuing to make the same bet by banking on the price rises being transitory.

The inflation that we are witnessing is a phenomenon that has taken the entire community of investors by surprise, and it is affecting a generation of actors who have never known a period like this in their professional lives. A portfolio of assets needs to be managed in a different way in periods of high inflation...especially when the rates are kept at artificially low levels.

The profitability of the entire bonds market has been collapsing since the start of the year, and the fall in the real yields has even started accelerating in the last few weeks: 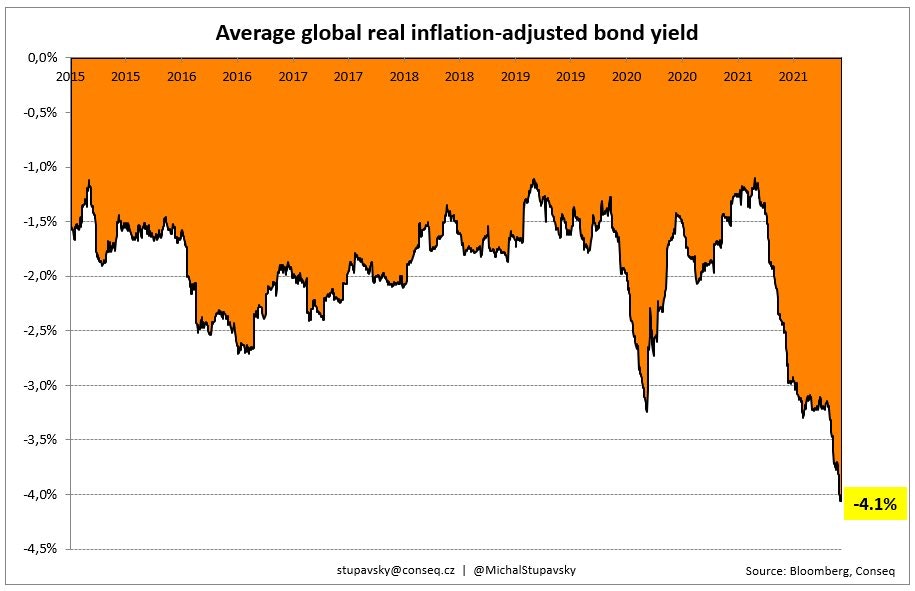 One might wonder whether there is any point, today, in staying exposed to the bond compartment. And with the level of margin on this type of product, one can only fear the effects of sales in this sector, where the exit door seems to be far too small by comparison with the volumes of assets invested in this sector.

This fall in the yields naturally affects the sovereign debts, including those of the United States. In the last two years, it is in fact Japanese debt that has coped best with this. 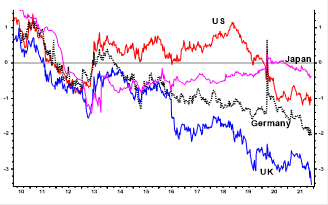 Yet it was in Japan that the most intense quantitative easing and asset purchasing programs for 13 years took place... But the sudden emergence of inflation is having an even bigger impact on the real yields in Europe and the U.S.

The transitory nature of the inflation is being thrown into doubt by the energy crisis in Europe, where electricity prices have literally been soaring for several weeks. 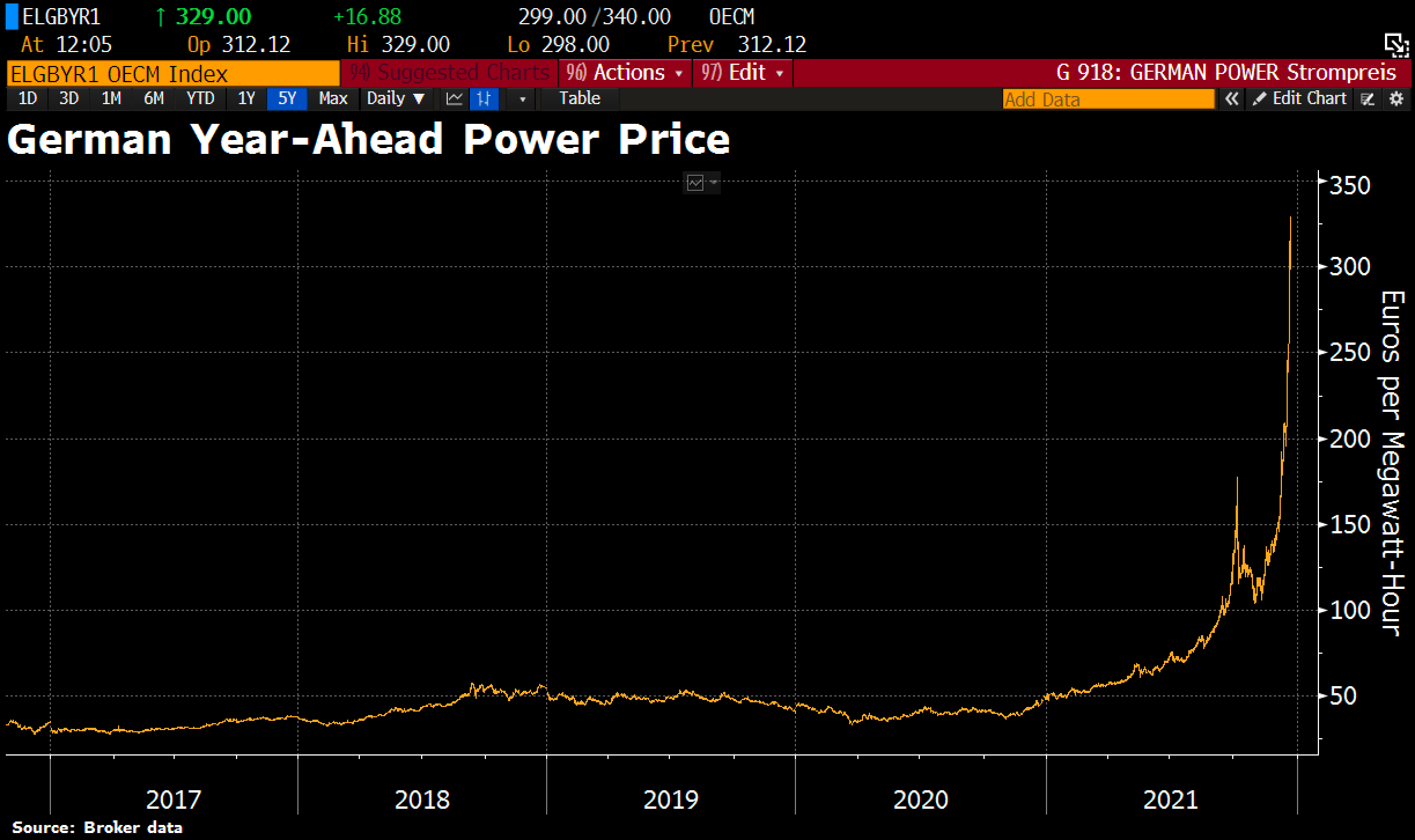 Even if the inflation were to ebb at the start of next year, this spectacular rise risks having consequences on the level of prices paid by producers on the margins, and therefore on economic activity. This soaring of prices represents a real impediment to the calmer waters we appear to be glimpsing in 2022, as we approach the end of the year, on the sanitary crisis front.

It remains to be seen whether the bonds market, with such negative yields, will once again be a refuge for investors if the recovery phase leaves the markets disappointed, or if, on the contrary, this sector too will go into a sulk because it continues to register losses, even in the event of an economic downturn and a fall in the markets.

Demand for investment in gold continues to be very high, and this stands to reason against such a backdrop.

This week, the figures for India’s gold imports confirm as much: 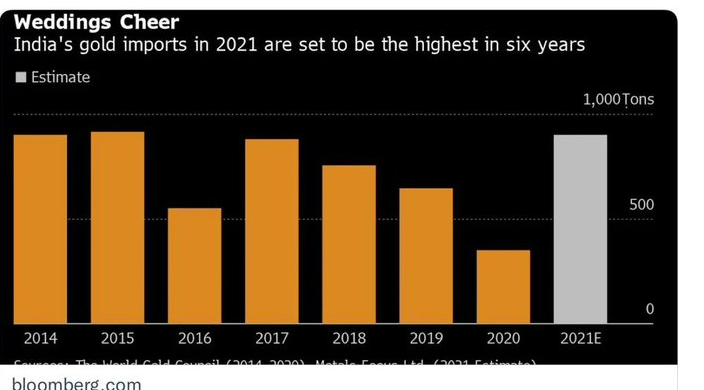 The level of imports is at its highest for 6 years and will doubtless get near the 1000-ton mark this year.

The consolidation in the gold prices observed this year has thus provided an opportunity to accumulate gold.

It is all the more remarkable to think that this accumulation of gold has happened against the backdrop of a strong recovery by the U.S. currency, which has appreciated in a year against all the currencies. The DXY index, which is in an overbought situation, is today ending a spectacular rise that had gone on continuously for 12 months. 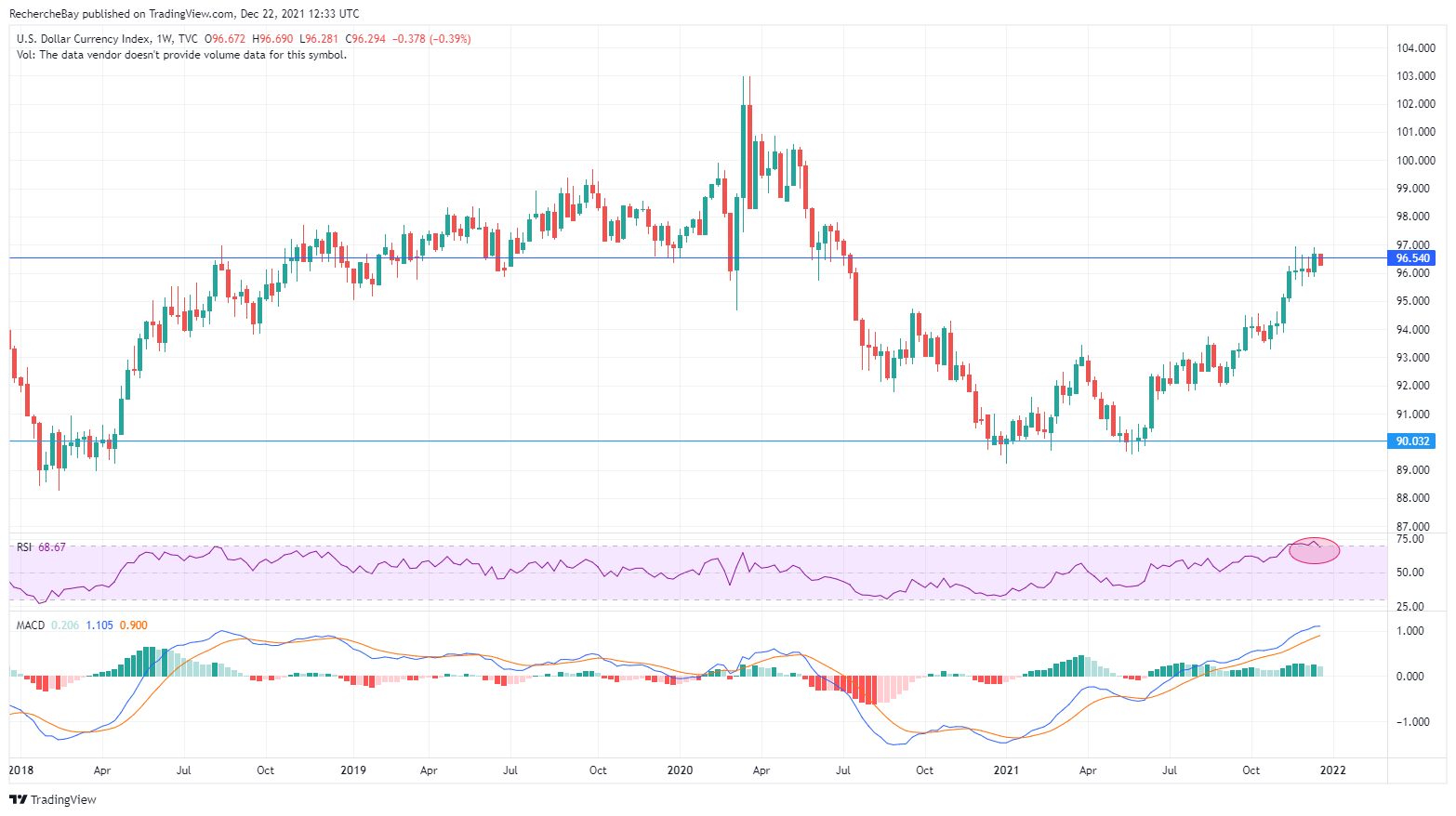 Despite the fact that the dollar has taken off, it is without doubt the sustained physical demand and the negative real yields that are keeping gold at around $1800 as we near the end of the year.