The Fed decided to raise rates by another 0.75% in order to fight inflation. The market was certainly expecting such a decision, but was hoping for some signs of appeasement and even an announcement of a "Fed pivot" by the end of the year. Instead, Jerome Powell said that inflation is far from being under control and that, in any case, if the sharp rise in rates causes an economic slowdown that is too brutal, the Fed has the necessary "tools".

During his press conference, Jerome Powell stated that the US central bank was not in a position to fix the price of energy and food, but that it could act on demand. In other words, the ultimate goal of this sudden rate hike is to cause a slowdown in the economy. A soft landing is no longer really an option. The urgency is to slow down the economic engine to bring down inflation. And if the engine stalls, the Fed will get out the tools to restart it.

Without waiting for the effects of this decision, we can already see that US monetary policy has caused a real cataclysm in the markets. The stock market is correcting, but it is especially the fall of the bond market that is worrying.

Indeed, the American 10-year bond recorded its worst performance since the Revolutionary War! 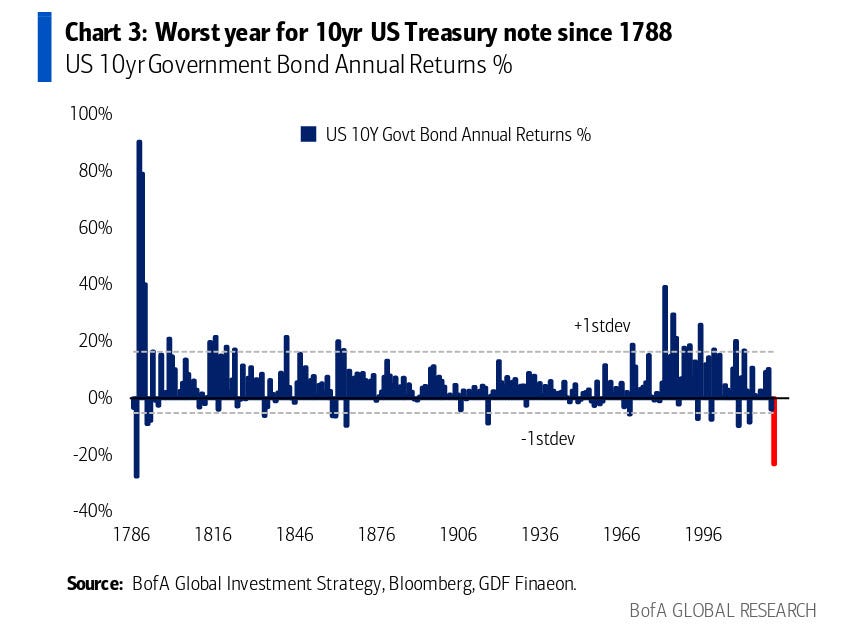 2022 also represents the worst year since 1929 in terms of cumulative stock/bond returns. Despite a late-year bounce, 2022 will remain an exception in terms of underperformance. In the US, since 1929, only 1931 and 1969 have had such negative returns: 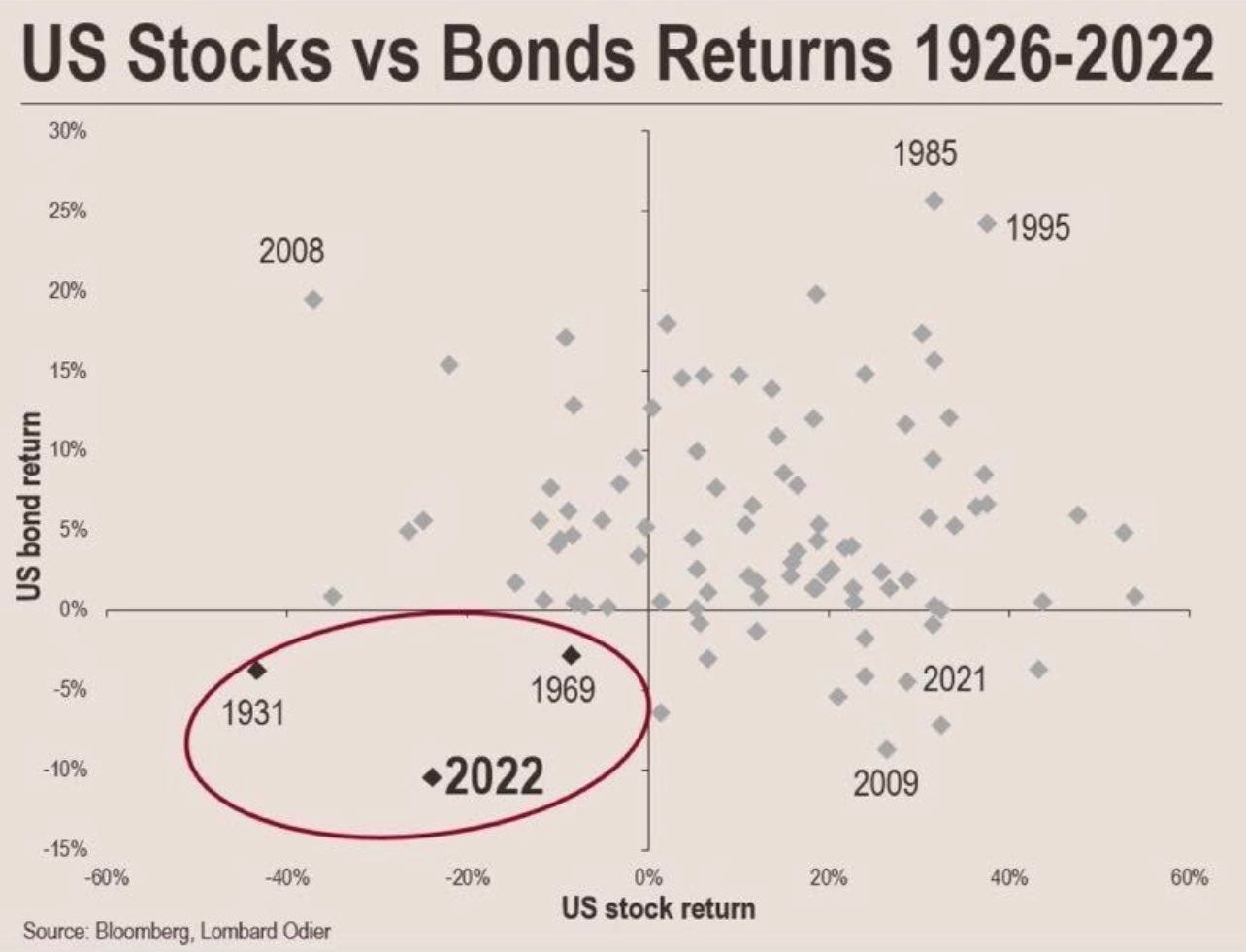 This bond collapse has already had a major impact in the United States. In previous articles, we have discussed the impact of rate hikes on the housing market. There is also a second direct victim of this monetary policy: the federal government.

In order to finance its deficit, the government must constantly borrow. The only way to pay off the old debt is to create new debt. This works well when rates are stable, but it is more complicated when rates rise so sharply.

As rates rise, the interest payments to be repaid explode upwards: 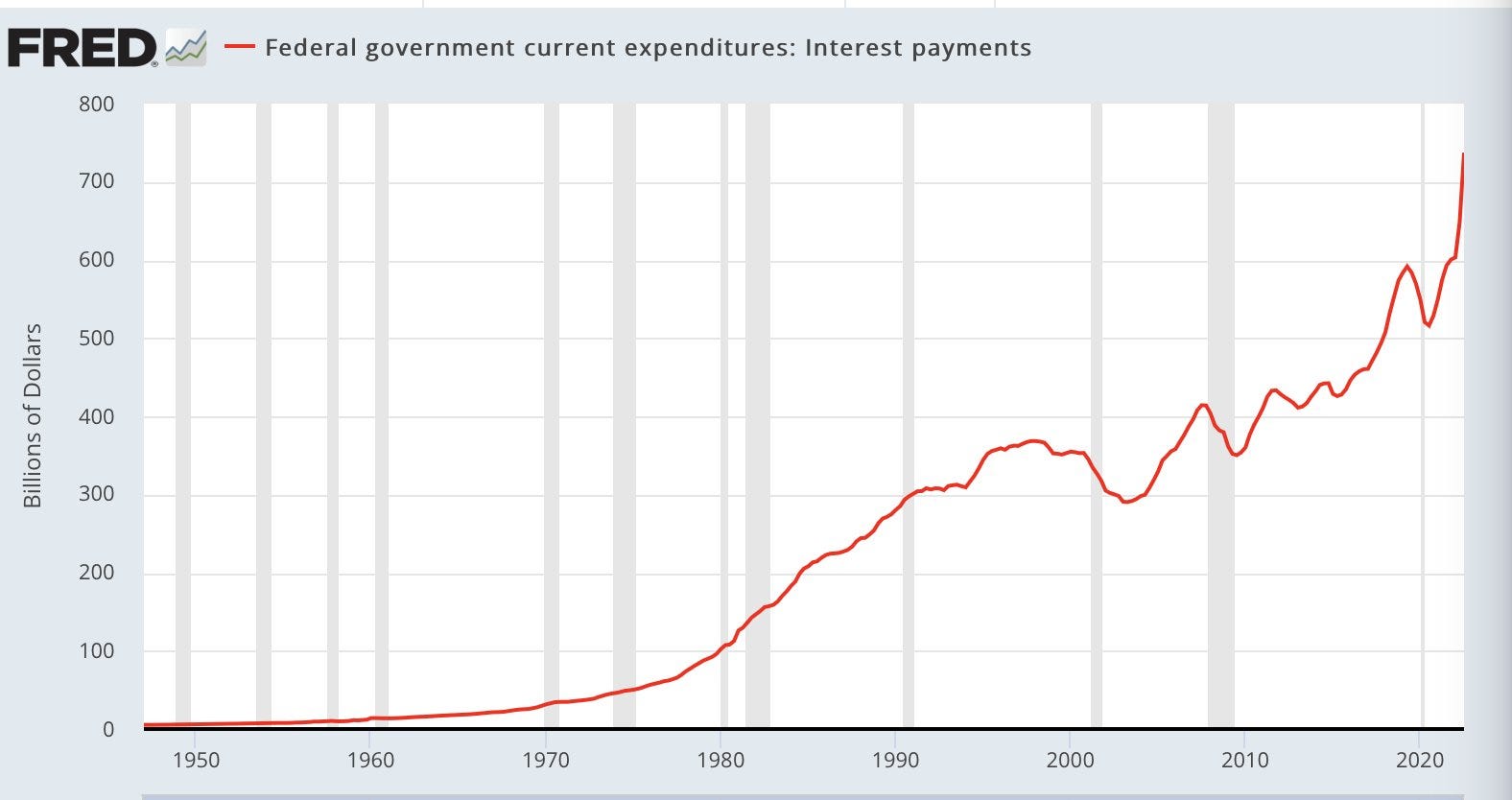 The government borrowing burden reached almost $750 billion this quarter. At the pace rates are rising, this burden will likely exceed $1 trillion by next year. Let's do a quick calculation: the U.S. government takes in $4.8 trillion in taxes, spends $3.7 trillion on fixed costs and $800 billion on military spending, leaving a projected margin of about $300 billion to pay down its debt. This is precisely what was budgeted for... The sharp increase in rates has tripled the amount of money the government has to fund compared to what was originally budgeted for!

In order to deal with the explosion in government spending associated with this new burden, the Treasury has just planned an emergency additional auction of $150 billion over the next few weeks. Originally planned for a total of $550 billion, the Treasury will ultimately raise $700 billion: "The borrowing estimate is $150 billion higher than announced in August 2022, primarily due to changes to projections of fiscal activity, greater than projected discount on marketable securities, and lower non-marketable financing." In other words, rising rates are a game changer. The Treasury finally needs more money. A lot more, even.

Another problem for the US Treasury, which I mentioned in my September 14 article, is that the government is facing a veritable wall of debt, with $9 trillion to be repaid in the next two years, or rather $9 trillion of new debt to be found on the markets to replace the old. Replacing these short-term debts will of course cost much more than anticipated, again because of rising interest rates. 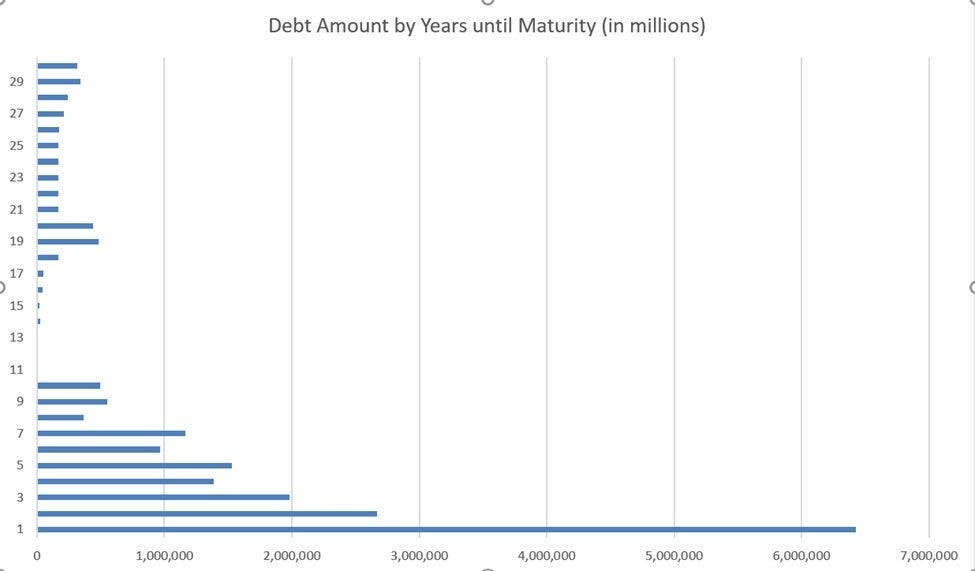 The third problem facing the U.S. Treasury is the drop in tax revenues, a phenomenon linked to the decline in activity.

Some sectors, such as real estate, already appear to be in a complete standstill as transaction volumes have plummeted compared to last year.

Other indicators, such as ocean freight prices, point to a sharp slowdown in the U.S. and disastrous tax revenues over the next two quarters. 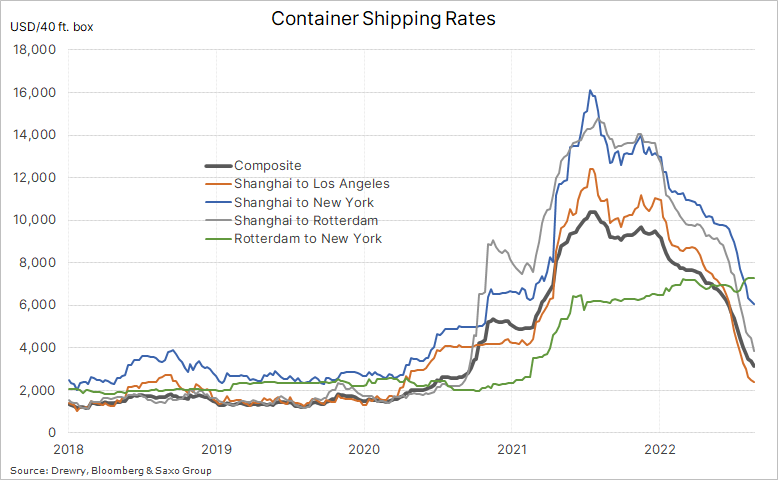 For now, the U.S. consumer is holding up exceptionally well. Inflation is not yet having a dramatic impact on U.S. consumption. This incredible resilience can be explained by two figures: to keep spending at the same pace as last year, the American consumer has dipped into their savings to the last penny and taken on debt at a historically high level. 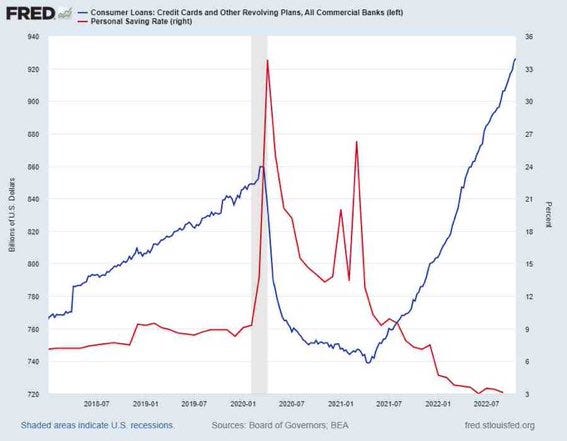 But with rates rising, his credit score will quickly deteriorate and his bank may unfortunately force him to slow down his spending.

What could slow down the business even faster is the threat of a diesel shortage. This shortage is linked to a logistical problem in the supply chain. We thought we were out of the congestion mess... but we're learning that the entire diesel supply chain has been suffering from a lack of investment in recent years. Current logistics no longer meet the constraints of the new global energy configuration. 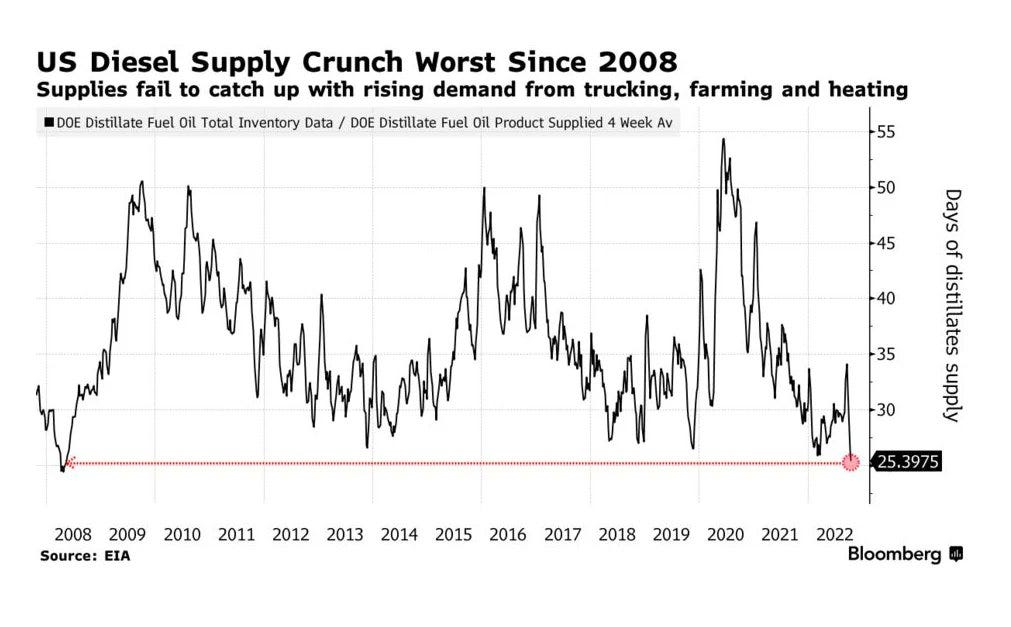 Against this backdrop, US consumer spending may be experiencing its last few weeks of euphoria.

The rising cost of borrowing, the debt wall and falling tax revenues due to the economic slowdown will push the Treasury to issue more debt to balance its books, at a time when the Fed has begun its balance sheet reduction program and is refusing to start a new bond buyback program for now.

So who will buy all this new debt?

The question arises as the U.S. debt market finds itself mired in an unprecedented liquidity crisis.

Some economists predict that the Treasury will have to buy back its sovereign bonds in order to improve the liquidity of that market: buying old, discounted long-term debt with new, short-term debt.

But this would only postpone the problem by piling more cinder blocks on the debt wall, which will quickly become insurmountable...

It is hard to imagine how the Fed could not be forced to use the famous tools it talks about, namely money printing, in an emergency.

It is in this context that central banks have increased their gold purchases in recent months.

In my monthly bulletin for Goldbroker's clients, I review the three elements that are at the origin of the current decline in gold prices and have pushed many managers to take bearish positions on the metal: rising real rates, a rising dollar and a shrinking money supply. But while funds are selling paper gold, at the same time there is a real rush into physical gold, largely initiated by central banks.

This purchase of physical gold is taking place at the very moment when the U.S. Treasury is in a bind to finance its deficit. As the US government's difficulties in financing its debt increase, the central banks of other countries are increasing their purchases of physical gold. The ultimate value of the yellow metal is gradually being realized. Gold is once again becoming the ultimate insurance against default. Default of a country, or default of its currency when the country in question turns the printing press.