The number of the week is the CPI index of American inflation, which is even higher than expected, with an increase of 8.3% over one year, and this despite a significant drop in oil costs. 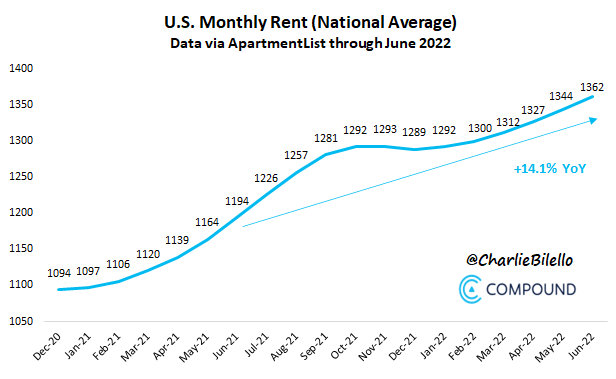 …but it is mainly the increase in agricultural prices that is worrying. The prices paid by farmers have made an historic jump in 2022 and this sharp increase is only beginning to be reflected in the CPI. 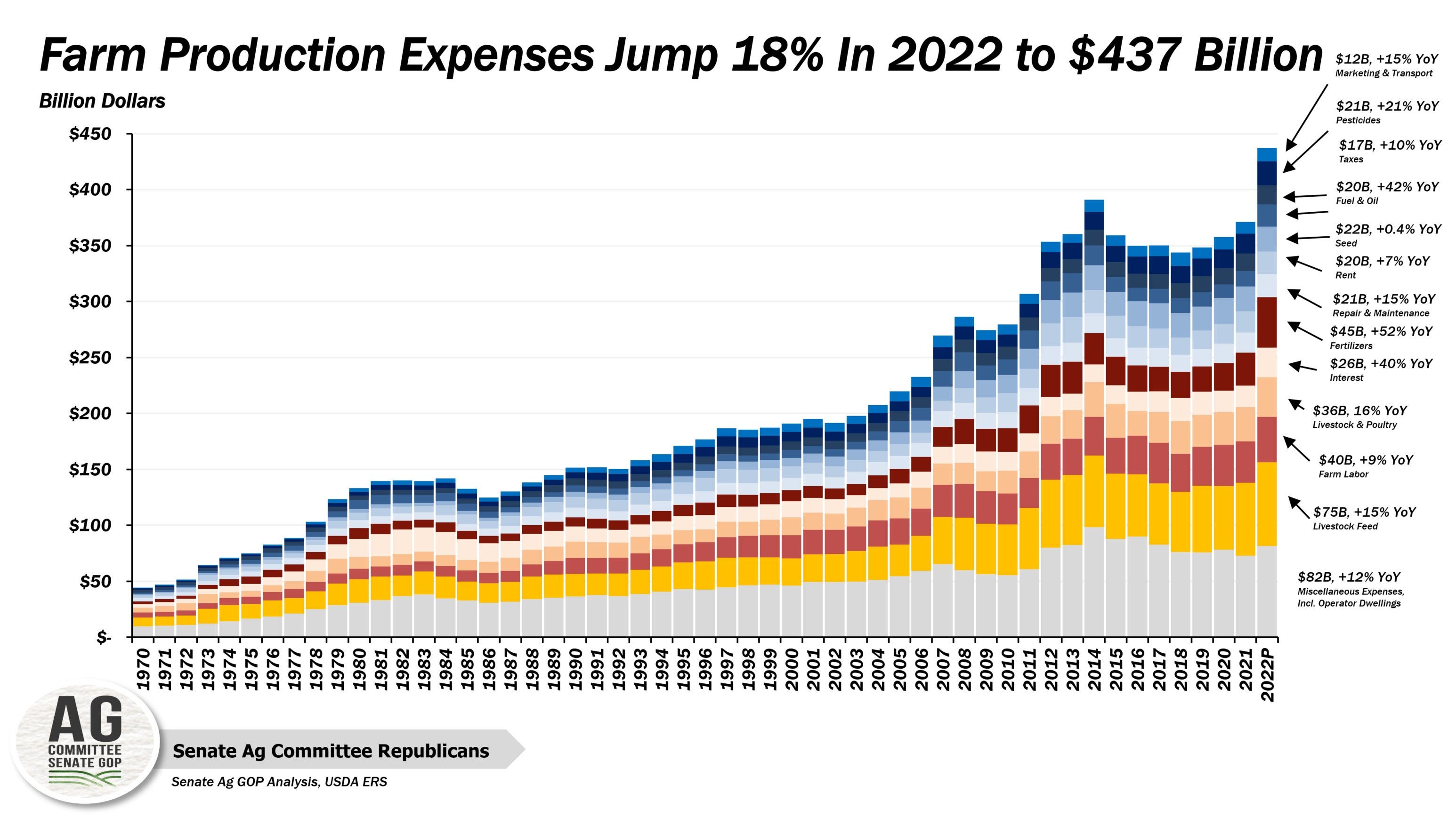 The poor inflation numbers have caused a sharp drop in the markets, which anticipate a continuation of the Fed's aggressive policy. The U.S. central bank still lags inflation by a wide margin and must raise rates in an attempt to catch up with inflation that it has yet to control, despite a brutal rate hike regime and the only monetary tightening in its history. Markets expect this aggressive policy to produce a sharp slowdown or even a recession in the United States.

For the time being, however, signs of a recession are not yet visible.

The latest results of the American banks confirm the good shape of the consumption in August. The director of Bank of America even noted a 10% increase in spending in August compared to last year. According to Brian Moynihan, Americans are consuming in a rather sustained manner.

The markets are therefore anticipating that the Fed will break this momentum. Investors have further increased their protection by buying a record level of bearish products. The level of exposure to market risk has fallen to its lowest level since October 2008. The market is expecting an even more violent shock than the one experienced during the great financial crisis! 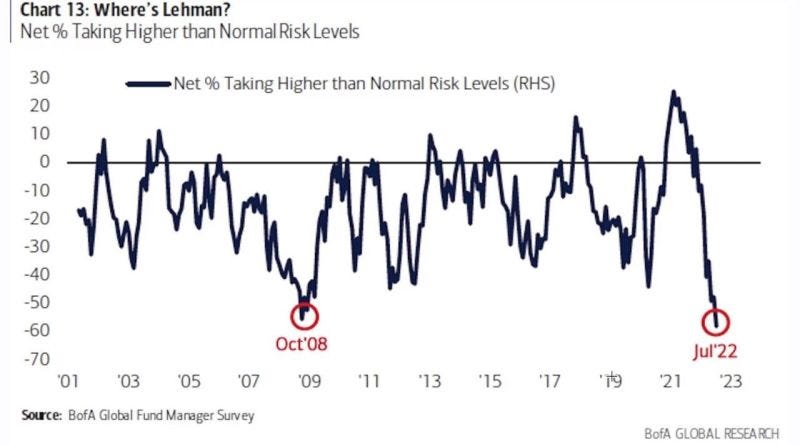 Liquidity levels have collapsed, making markets very volatile. Disappointment after the release of the inflation numbers sent the markets plunging in a historic down session, with the SP500 recording the fifth largest decline in its history. 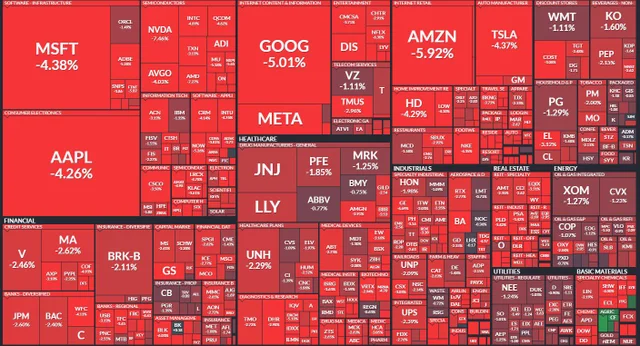 This market correction propelled the dollar back to its highs, increasing selling pressure on gold, which returned to test its support under $1,700.

The fall in equities is not benefiting the bond market, which is not acting as a safe haven in this generalized asset sell-off. On the contrary, bond yields continue to fall in anticipation of much higher rates. The US 10-year has now broken its 40-year downward trend: 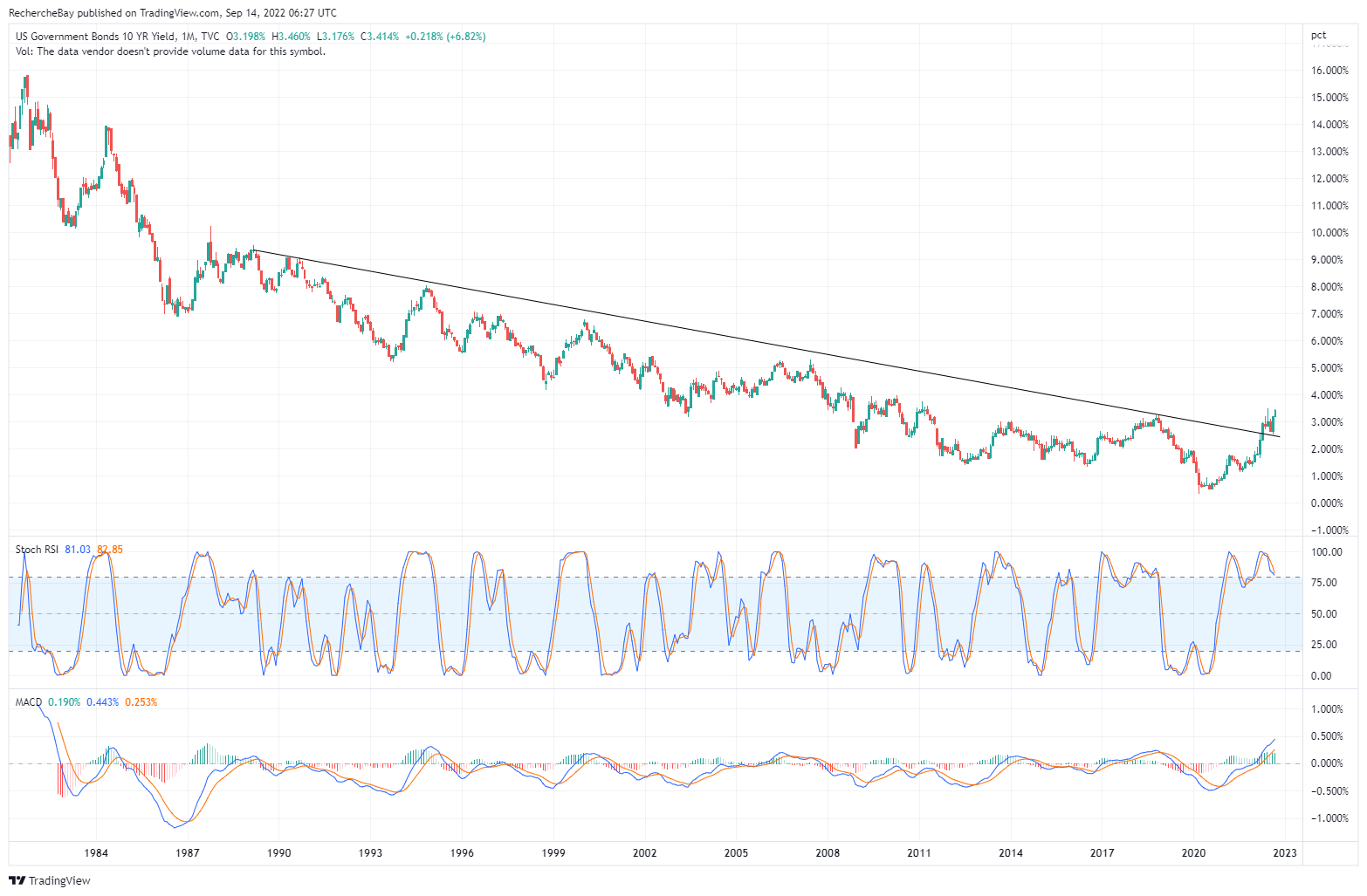 But it is mainly the 10-year / 2-year differential that investors are scrutinizing at the moment. Since this summer, we have seen a reversal in short / long rates. In the past, this inversion has signaled systemic crises.

In each case, the systemic crisis was not caused by market risk but by credit risk.

What credit event does the rate inversion signal this time?

A note from a major US bank that went unnoticed gives us a clue:  Bank of America announces that the lack of liquidity in the US Treasury market is now a major systemic risk, greater than that of toxic mortgage products in 2007.

The U.S. Treasury market is the most important financial market in the world, as its products are a fundamental benchmark for the pricing of virtually all other financial assets.

The total amount of capital allocated to these securities has not kept pace with the very rapid growth in Treasury issuance. On the contrary! The number of securities is decreasing while issuance is increasing!

As trading in the U.S. Treasury market declined, issuance of U.S. Treasuries continued to increase. Today, the market has become dangerously illiquid.

As a result, U.S. investment-grade bond funds (GRADE A) have experienced an unprecedented thirteen consecutive weeks of redemptions, with $55.7 billion withdrawn during the period, according to data from Refinitiv Lipper. Since the Fed is no longer a buyer of last resort, funds prefer to sell their assets!

Without liquidity in this market, Bank of America warns that the credit market could be severely disrupted. If the Treasury market remains paralyzed for any length of time, it is likely that individual credit securities, including corporate, household and government debt in securities and loans, would be unable to be traded. A systemic credit event would impact all markets even more significantly than the subprime crisis.

This lack of liquidity comes at a time when the U.S. Treasury faces a veritable wall of debt: over the next 24 months, $9 trillion in Treasury bonds will mature. That's almost a third of the total amount of US debt issued over short periods that will have to be repaid... or rather "rolled over"... which will lead the Treasury to automatically issue an astronomical amount of new debt, just to replace these short maturities! 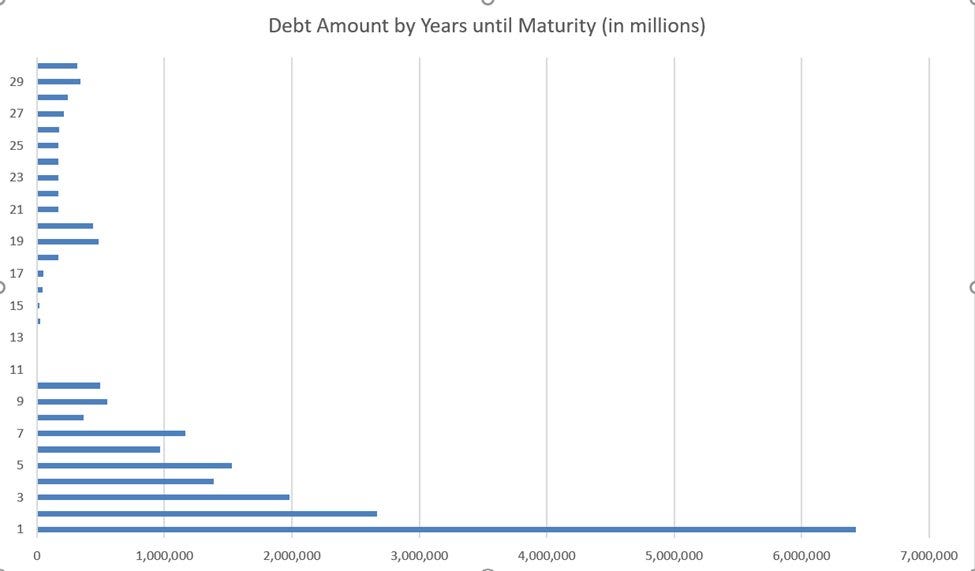 The bad news is that as rates rise, the replacement cost of the debt is likely to explode. Without even providing for additional spending, the US government is mathematically locked into a debt spiral that will force it to spend even more money to "roll over" its astronomical debt, much like an over-indebted consumer who pays more and more interest when he uses a second credit card to pay off the expenses on his first card.

This new bond issue risks further complicating the liquidity of the US Treasury market.

The risk is that they will lose their status as a reserve asset, which would create a systemic risk, the repercussions of which are difficult to measure.

Behind this risk identified by the US bank, confidence in the value of US debt is at stake.

In this perspective, the purchase of physical gold becomes very important. The fall in the markets triggers margin calls which mechanically cause the dollar to rise. This rise in the US currency in turn leads to a logical correction in commodity prices, with gold and silver not escaping this movement.

The correction in gold, silver and platinum prices offers an opportunity for physical metal accumulation.

We are witnessing a real raid on precious metals.

In India, physical silver imports are at an all-time high this August: 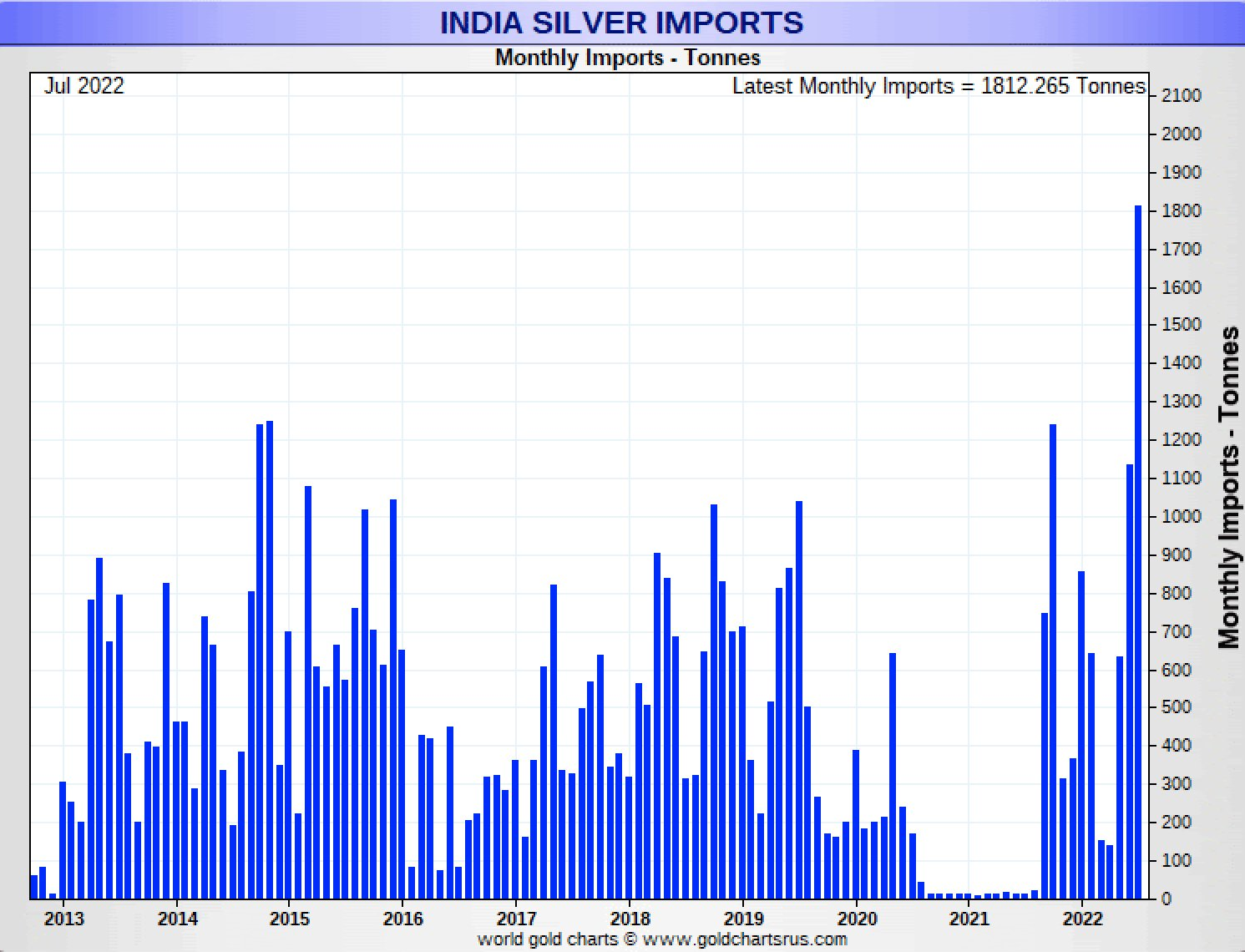 This raid on physicals is taking place at the same time as the number of short positions in the SLV ETF is reaching a record high: more than fifty million shares are now being sold short, pushing the borrowing price of these shares to an all-time high of 5.3%! 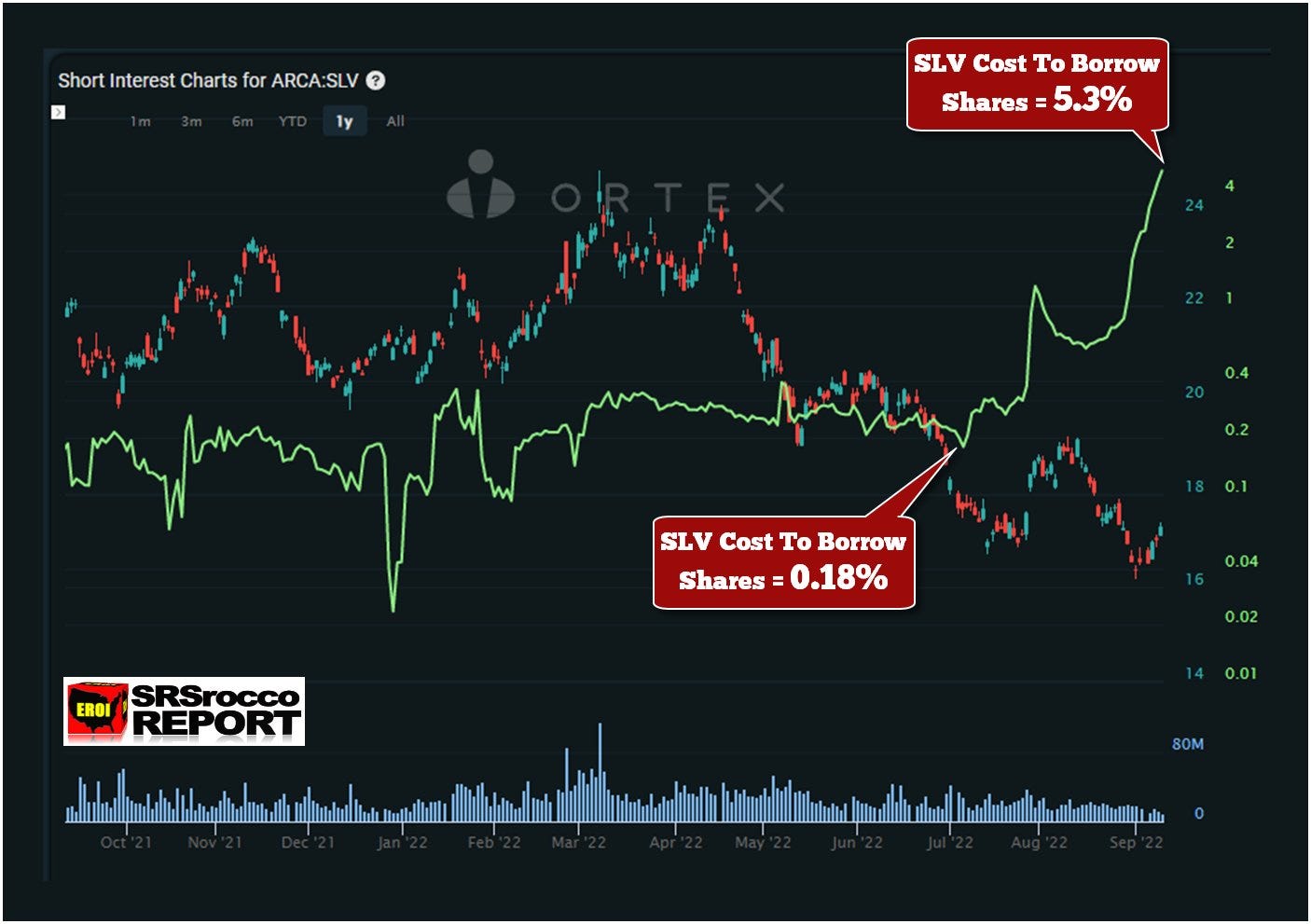 Record shorts also on Sprott's PSLV ETF: investors are betting on a prolonged downturn in silver prices based on the risk of a sharp market correction.

The advice to sell silver derivatives given by many analysts in August (TD securities had even given a price target of $17) has paid off: short positions are at their highest, both on futures and ETFs.

These short positions on the paper market coincide with a tension on the physical resources of the metal. The raid on silver continues unabated. Earlier this week, the COMEX saw a record amount of metal removed from its vaults: over two million ounces in a single day!

With such a disconnect between the paper and physical markets, the conditions for a short squeeze on silver are even more present today than they were during the silver short squeeze of 2021.

In platinum, the tension on the physical metal is significant. COMEX stocks are disappearing at a steady pace. As of Monday, 2% of platinum reserves have disappeared from the vaults. There are less than 230,000 ounces of physical metal left to support the entire platinum futures market. The squeeze should logically begin well before the stock hits zero.