But markets are now anticipating a rapid return of inflation to pre-2021 levels. 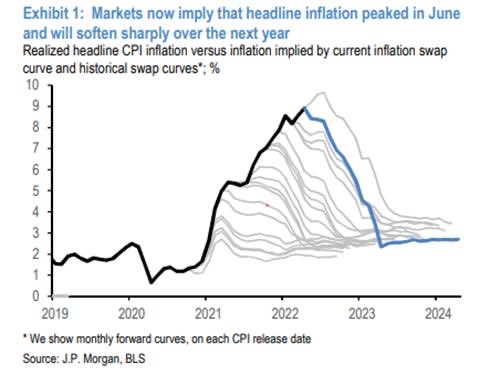 The gap between the official CPI rate and the 10-year BE index, which measures the level of inflation expected by investors, has never been so wide.

Almost 5% now separates the two indices. This is unprecedented.

This gap proves one thing: investors are largely convinced that the Fed will succeed in curbing inflation. We can even see that the level of confidence in the Fed is reinforced when we measure the small margin that exists between bond instruments, which protect against inflation, and conventional instruments.

Inflation insurance is very cheap, because the market does not believe that inflation will continue.

This insurance is linked to the still high level of confidence in the US Federal Reserve's ability to solve inflationary fever in the very short term.

Gold, the ultimate insurance against monetary policy error, has logically fallen in the face of this renewed confidence.

Mining companies are also reporting this lack of investor interest in the gold market. The index that measures the sector's sentiment is as low as it was in March 2020, and its RSI indicator is even lower than this last low point! 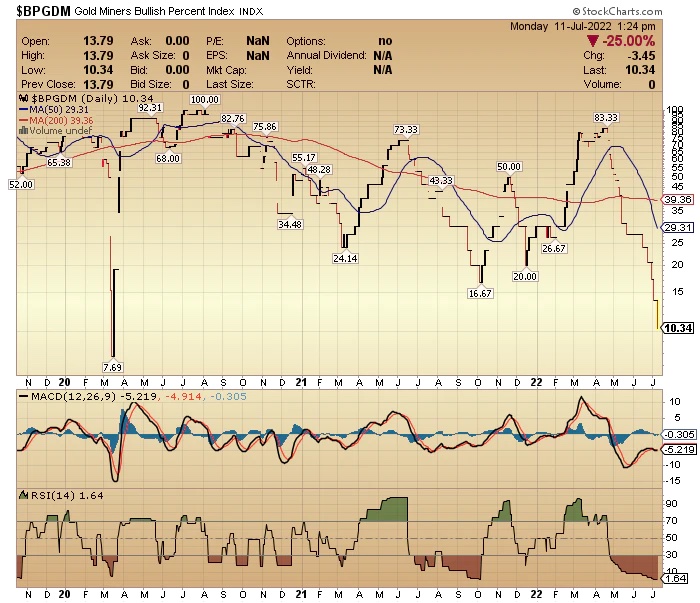 In other words, the market has never looked so little for protection against inflation... at a time when signs of inflation have never been higher.

While funds are selling futures contracts on major commodities, the situation in the real economy is far from being resolved.

This week, Bloomberg reminds us how tight the supply is for polysilicon, a key component in the manufacture of solar panels.

Food prices are also reaching record highs in Germany. The annual increase to 12.6% marks a record since statistics have been measuring food prices. 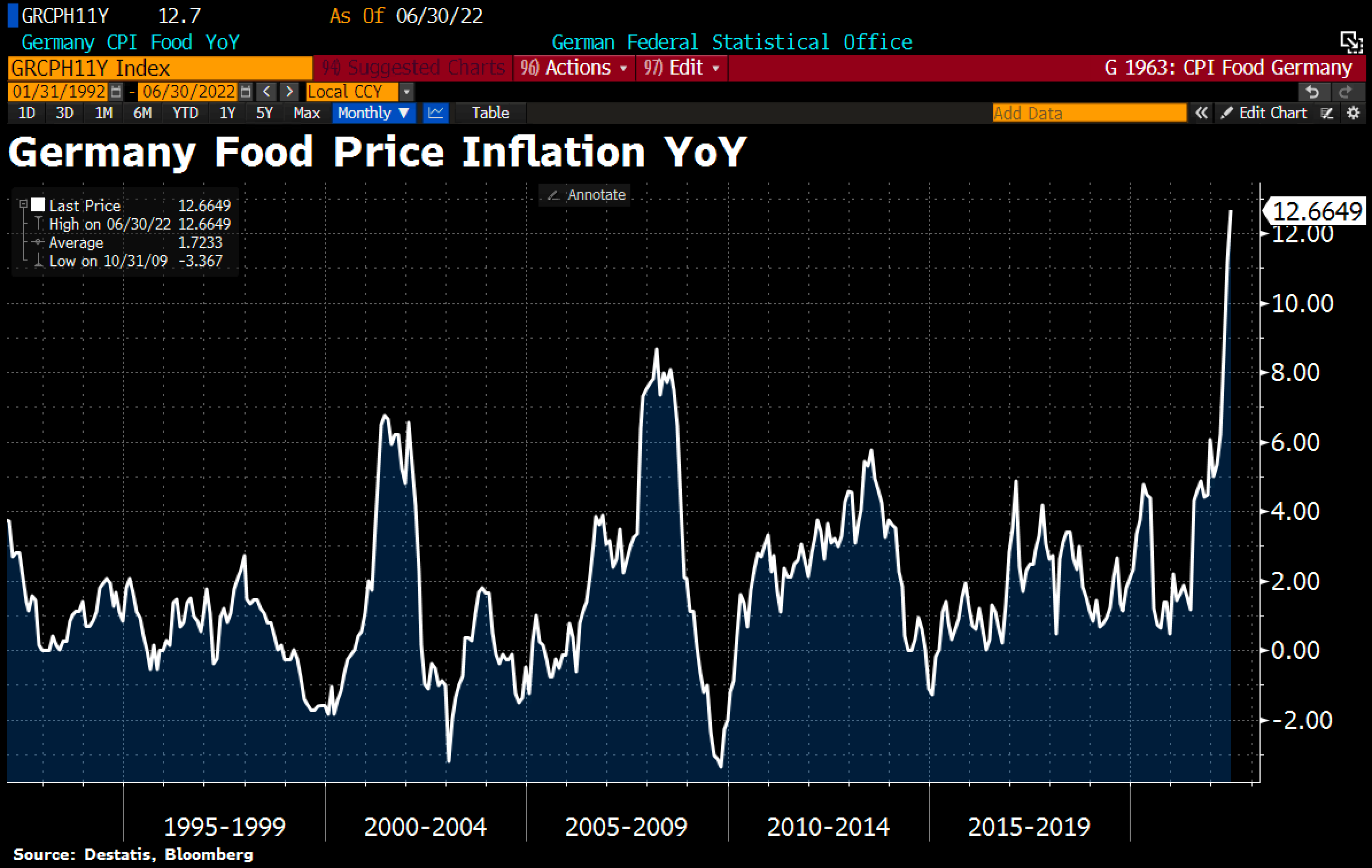 On the other hand, the energy crisis is amplifying the price of coal, which is at an all-time high in Asia and Europe.

These commodity tensions did not deter hedge funds from selling oil futures on a massive scale this week. So there is a physical market for oil, where the Russian oil cut-off is causing global supply tension, and then alongside this physical market, there is a paper market that is largely bearish.

The disconnect between the physical and paper markets observed in precious metals over the past 12 years is now visible in the oil market.

Earlier this week, ICE Brent Futures plunged below $100 a barrel. At the same time, a physical oil trader offered +$5.85 on the Dated Brent  Forties crude (North Sea contract), without finding a seller. This premium on physical oil represents the highest since 2008.

The paper market is being used to artificially suppress the price of physicals. This does not reduce demand, quite the contrary. Like any price control mechanism, this "tool" that the futures market represents accelerates the rush to physical oil.

Peter Hambro, a former insider of the very closed precious metals market, explains in a July 4 article how this price control works.

According to Hambro, since 2018, the financial stability offices of the world's central banks have followed the instructions of the Bank for International Settlements (BIS) to mask the perception of inflation through control of the gold market.

Hambro goes on to explain that the banks created a huge derivative market in gold, again under the instructions of the BIS. The paper gold thus created served as a buffer to dampen physical demand: with this invention, the "alchemists" could create gold that did not exist and sell what they did not possess. Although this is already understood by most gold market participants, the impact is stronger when it is stated by a major market player.

Hambro's statements are all the more significant because they come as the trial of JP Morgan traders for manipulating the price of precious metals begins. The bank has had a mechanism in place to control gold prices for many years. This trial will certainly reveal the operational details of this gigantic fraud.

The decline in futures contracts is mainly driven by the bullish behavior of the dollar.

The strength of the greenback is mainly due to the decline of the euro and the yen. The euro even briefly fell back below parity this week.

But it is the yen that has taken a spectacular dive since the beginning of the year. In ten years, the Japanese currency has lost half its value against the dollar: 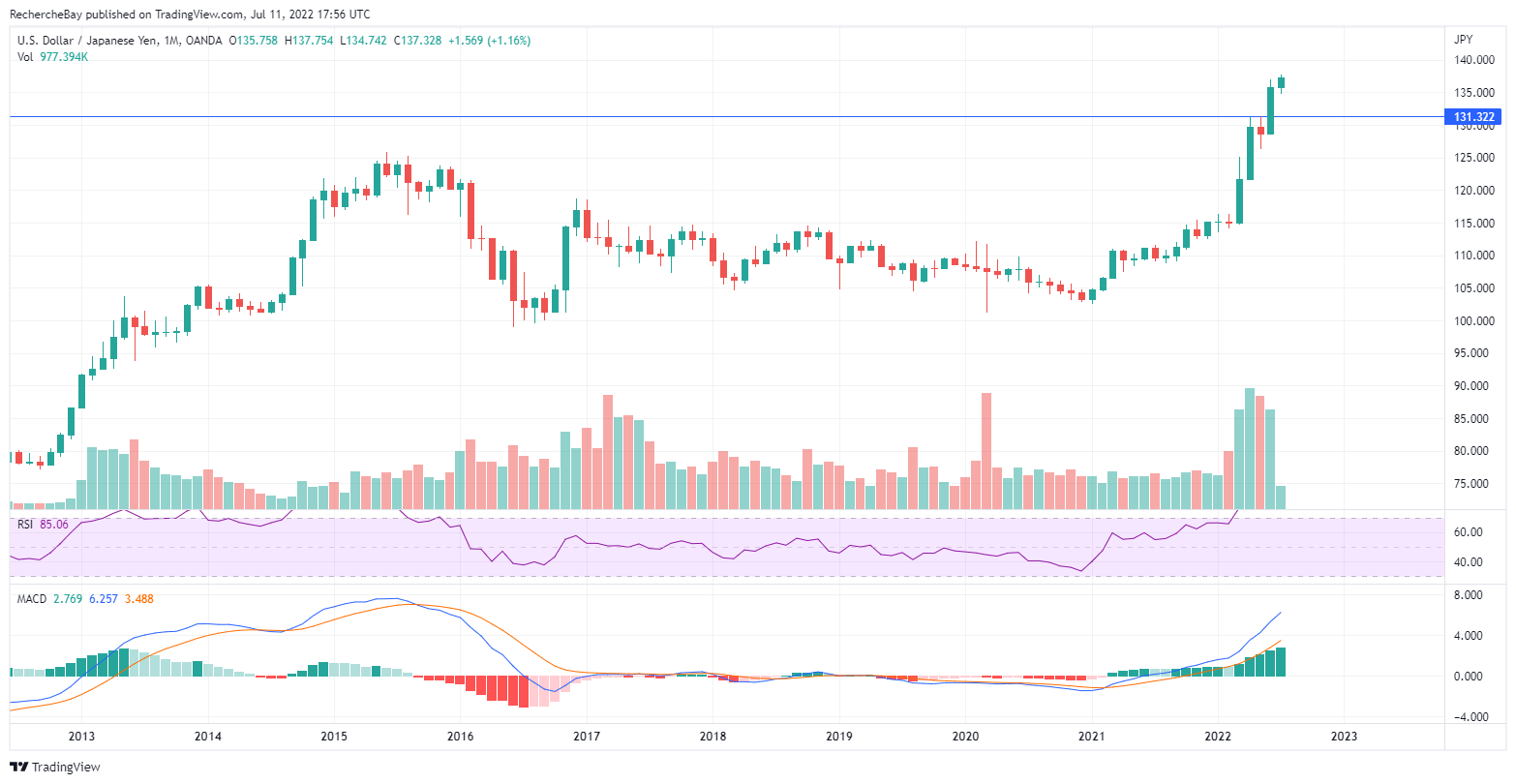 The weakening of the yen is a direct consequence of Japan's monetary policy, which is now the exact opposite of the Fed's. The BoJ is not reducing its balance sheet and is not raising rates. On the contrary. The central bank's latest bond buybacks are at historic levels. Never before has the monetization of Japanese debt been done at such a pace. 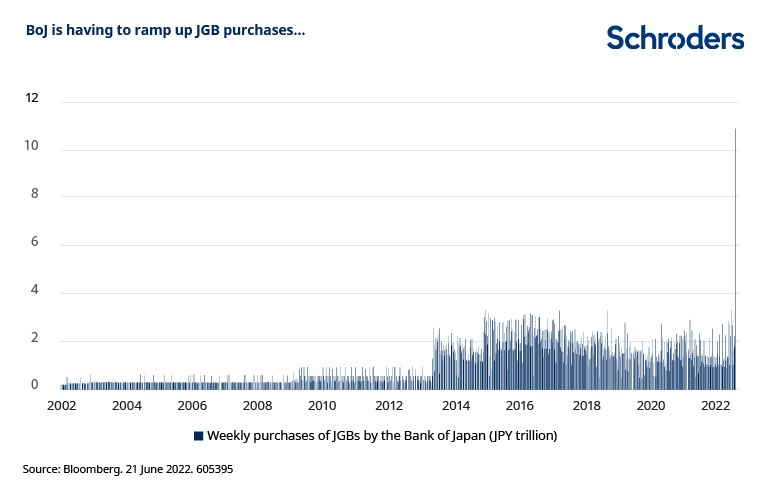 Gold price has also logically started to fall again in the face of the soaring dollar.

Open Interest is back on the rise as traders accelerate the hedging of their short positions.

In other words, not only are investors moving away from the sector, but some funds are adding shorts in this downward movement. This is also true for the mining sector, as short positions in the GDX index now represent nearly $1 billion.

The situation is the opposite for dollar-linked futures, which have seen the number of bullish positions soar in recent days.

In any case, the situation on futures is totally disconnected from what is happening on the physical market and this concerns all precious metals: physical demand remains very strong on gold and silver, but also on platinum.

The COMEX has only 62 million ounces of silver left in the "Registered" category for futures delivery, which is barely the equivalent of a little over a billion dollars. Since the beginning of the Silver Short Squeeze, almost two-thirds of the inventory in this category has melted away.

What Is The Real Amount of Physical Silver to Sell on the COMEX and LBMA? (Cyrille Jubert)

Platinum is also undergoing a spectacular run. There are only 156.2k oz in the Registered category and 162.7k oz in the Eligible category. 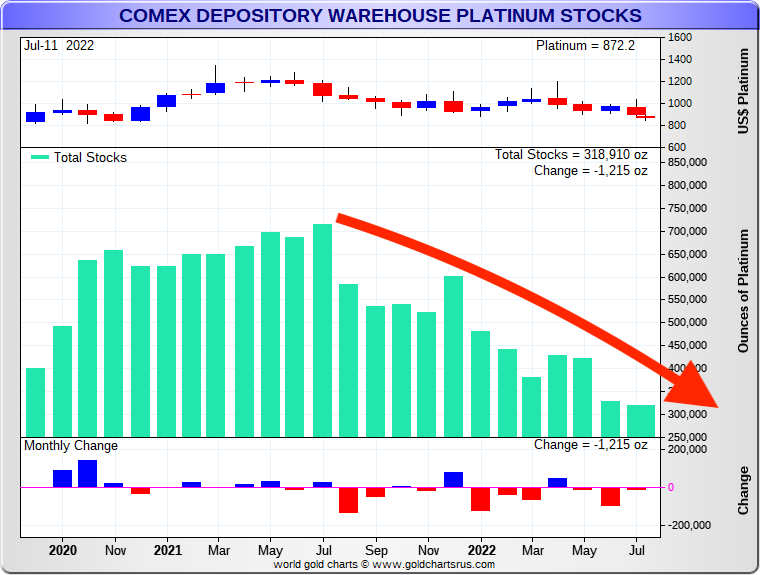 On July 12 alone, 37,000 ounces of platinum were withdrawn from the COMEX, or 20% of the Registered stock that disappeared in 24 hours.

This rush heralds an imminent short squeeze on all precious metals.

The massive buying of physical metals that we are seeing despite the price correction supports the idea of a coming squeeze.