As part of the policy against fossil fuels decreed by the COP to "fight against climate change, France has already banned the installation of oil-fired boilers from January 1, 2022 and these boilers will be banned in 2028. All heat engines should be banned in Europe in 2035 !

To discourage consumers from using oil engines, the price of gas could be pushed up to such a level that everyone will seek an alternative. This should be done step by step, as the supply of electric motors is very insufficient and the European battery supply is actually barely nascent in the EU.

The Fed has announced that it wants to lower inflation by reducing demand. Except it will take time.

If the oil price continues on its current trend, it could hit $150 by the end of August, or even higher. 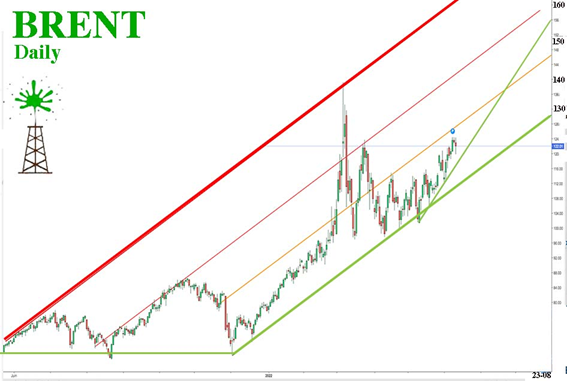 Historically, the ratio between gold and oil has been between 13 and 20: 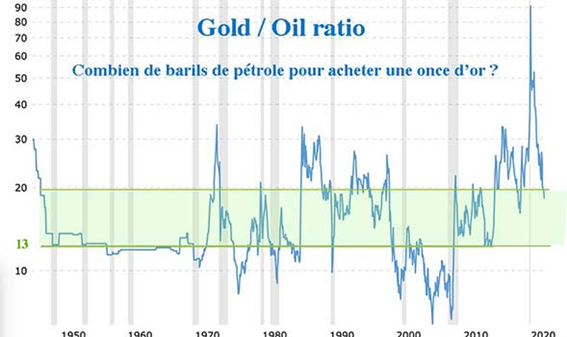 Since September 2015, I have closely followed the forecasts of Behavioral Analysis of Market (BAM's software), which does not follow the political informations, anticipates the contingency of a panic rise in the price of oil this summer up to $180. At the moment, it is juste a probability.

Mines cannot be operated at a loss. If the price of energy soars to three times the average price of the last 6 years, precious metals will have to follow.

In my article, "Why The Price Of Metals Could Soar In 2022" and in "There Is an Urgent Need to Revalue the Price of Silver", I clearly explain that there is not enough physical silver on the planet to develop solar energy or the alternative technologies. In addition, there has been no geological research for years to increase the known silver reserves, because it is not profitable when the price of silver is so low. To change this paradigm, silver would have to be at about 10 times the current price.

What was already true, when the price of a barrel was at $80, is even more so at today's prices and at the price that oil could reach soon. That is one of the reasons, why I expect a bullish explosion in silver and gold prices.

After the seizure of Russia's currency reserves by Western central banks, it was demonstrated that keeping cash there was dangerous for a nation. This accelerated the demand for gold from central banks. If prices were not controlled by the bullion banks on the COMEX and the LBMA through the usual tricks of paper-gold and in particular ETFs, gold would have already soared to new historic highs.

A monetary war is underway between the West, which wants to continue the current system of fiat currencies, and the BRICS, who are at work to move to a kind of BANCOR, where a basket of currencies would be stabilized by a basket of commodities, including gold and silver. The central banks of the planet are aware of this split between two blocs and all nations know that gold will have a major role to play in the international trades.

In addition, the Federal Reserve announced that it would fight against inflation by reducing demand and therefore attacking wealth.

This wealth is expressed in particular by the gigantic financial bubble, which has inflated on the stock markets. All the monetary injections of recent years, and especially those of the year 2000, seem to have been invested in the stock market.

Since the peak of that bubble last December, the DJIA has fallen 20%, the S&P500 26% and the Nasdaq 44% in just 6 months. The famous FAANGs (FaceBook, Apple, Amazon, Netflix and Google) had driven the stock market up; they seem to have been dropped abruptly by the biggest fund managers and have deflated very sharply, taking the stock market with them. At the end of 2021, the global capitalisation of American stocks was $-53 Trillion. On the 10th of June, it fell to 41 T. 12,000 billion dollars had been arisen.

On May 13, Zoltan Pozsar published an analysis on Credit Suisse “The charge of the Walkiries”. He announced that the Fed would destroy all the liquidity injected into the system in recent years and lower the stock market to its pre-2020 levels. This would lead to a much bigger drop in the stock markets, even if temporary rebounds are likely.

Investors who exited the stock markets early enough will have to re-invest their cash somewhere. However, the stocks are falling and so are the bonds. The safety is certainly to place them in the precious metals, whose charts and fundamentals are extremely reassuring.