The rise in the price of commodities and the chaotic emergence from the sanitary crisis are leading to the first signs, in the United States and around the world, of supply shortages.

These inventory shortages are increasingly impacting upon current affairs, as can be seen from the number of news articles referring to this exact issue: 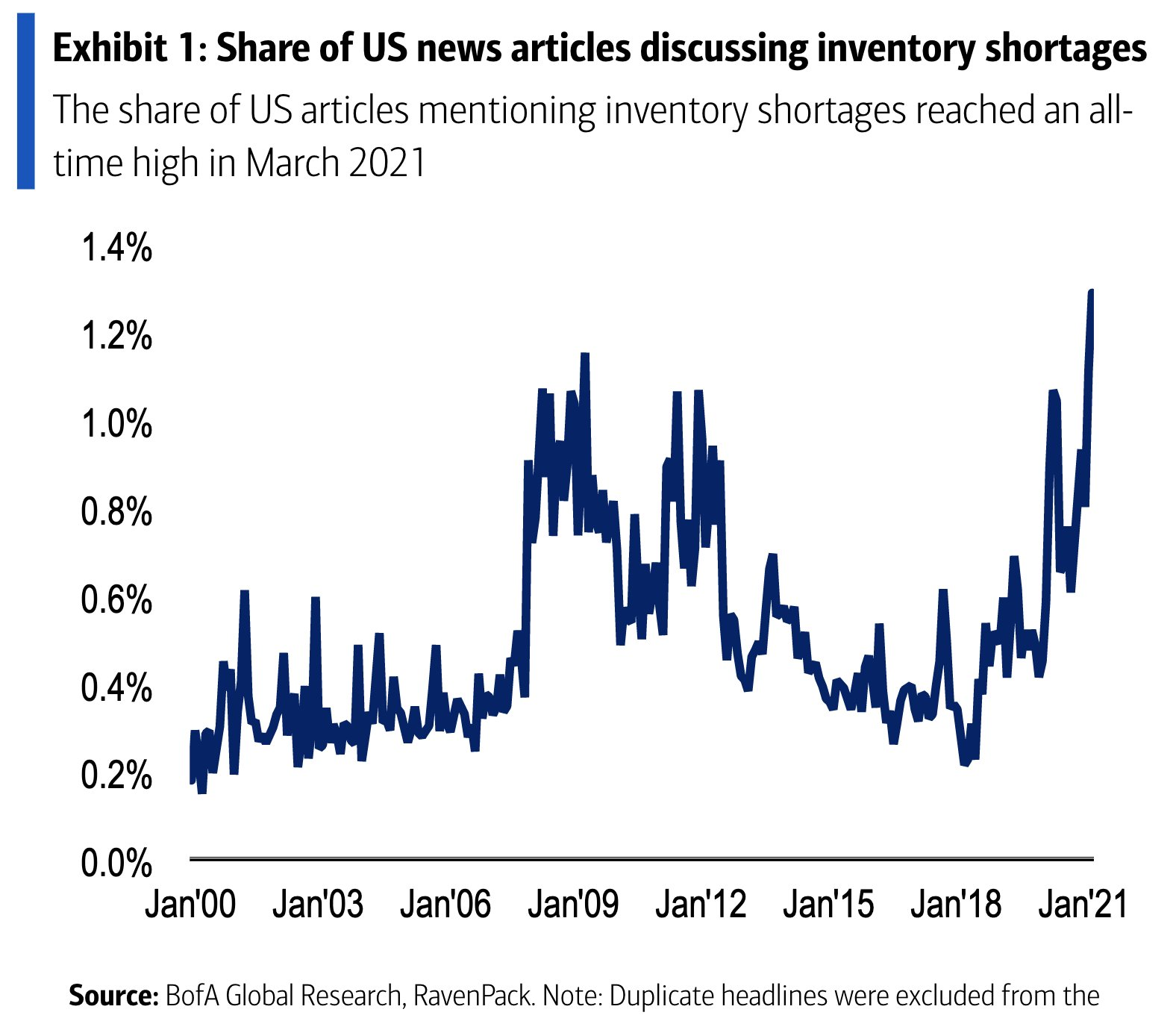 Inflation in the United States is now materializing in the price of consumer goods. A gallon of organic milk now costs over $10 in many States, and Coca-Cola has increased its prices for the first time since 2018.

These inventory problems are also reflected in the supplier delivery times, which are longer than at any time in the last 50 years: 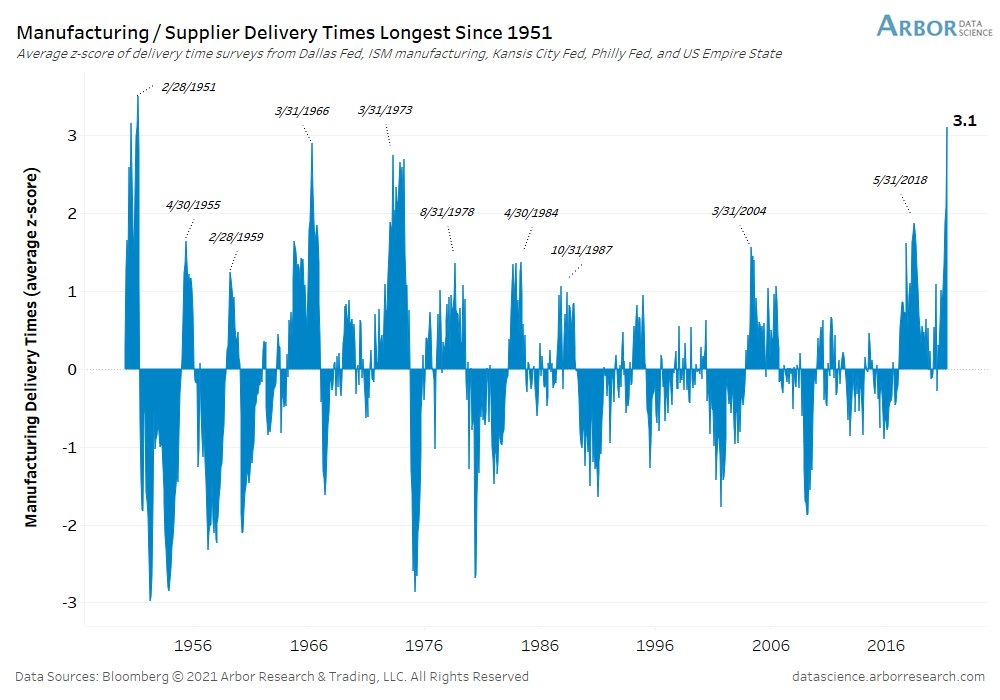 These tensions with regard to inventories are the first signs of hidden inflation. When the order book is getting thicker but retail prices aren’t budging, it is entirely normal to see supplier delivery times getting longer. Ordering certain durable consumer goods, such as a simple sofa, a washing machine, or a sauna, and having them arrive in less than two weeks, has become increasingly difficult in the United States. When a retailer cannot pass on the brutal rise in its supplier’s costs, the item quite simply becomes out of stock. Things that you could buy at a reduced price a few months ago are suddenly impossible to get hold of. It’s the first tangible sign that inflation is making a return to everyday life.

And this change is bringing out a consumerist impulse that is even more viral than ever. If the idea that “this thing I want to buy won’t be available at its current price for much longer” proliferates, it will come as no surprise to see this frenzied buying gather pace.

Unfortunately for the country’s finances, it is U.S. imports that will benefit the most from this craze. The number of shipping containers arriving at U.S. ports and then going back home without any cargo is rising sharply: the boats are only loaded with goods for the China > USA leg of the journey... 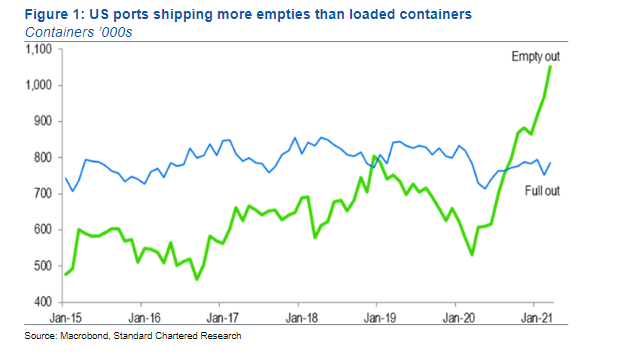 One can see the same thing happening on the macro-economic level too: the more money the Fed prints, the higher the U.S. deficit climbs!

The measures taken by the Fed are making the money supply explode, and this is resulting in a brutal rise in inflation. This monetary policy is also making the U.S. deficit explode, though: 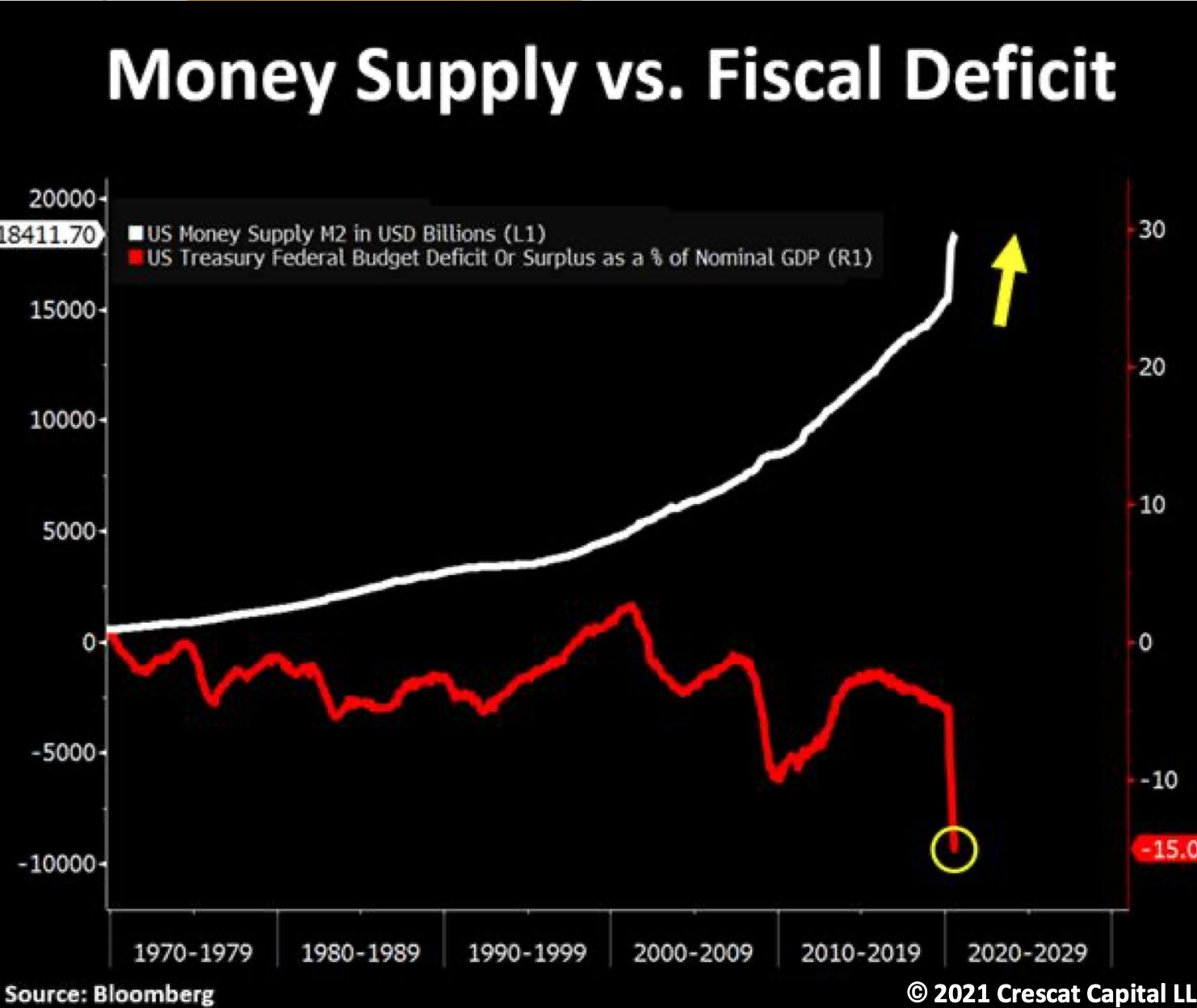 Inflation is a self-perpetuating phenomenon. The prices of commodities go up, leading to profound changes in the way the trade exchanges work. This disruption, in turn, affects the price of the commodities. Right now, the purchasing frenzy is feeding even greater demand and accentuating, in turn, the rises in the price of manufactured goods.

Take soya, for instance. The price of soya has practically doubled in a year:

We have arrived back at the peak seen in 2013. Ultimately, this rise is not as crazy as one might think... But since transport costs have skyrocketed and inflation has spread to every aspect of the production chain, the price of soya oil has undergone a far more significant hike. The upshot is that we are seeing a rise in the price of the end product that really is crazy. 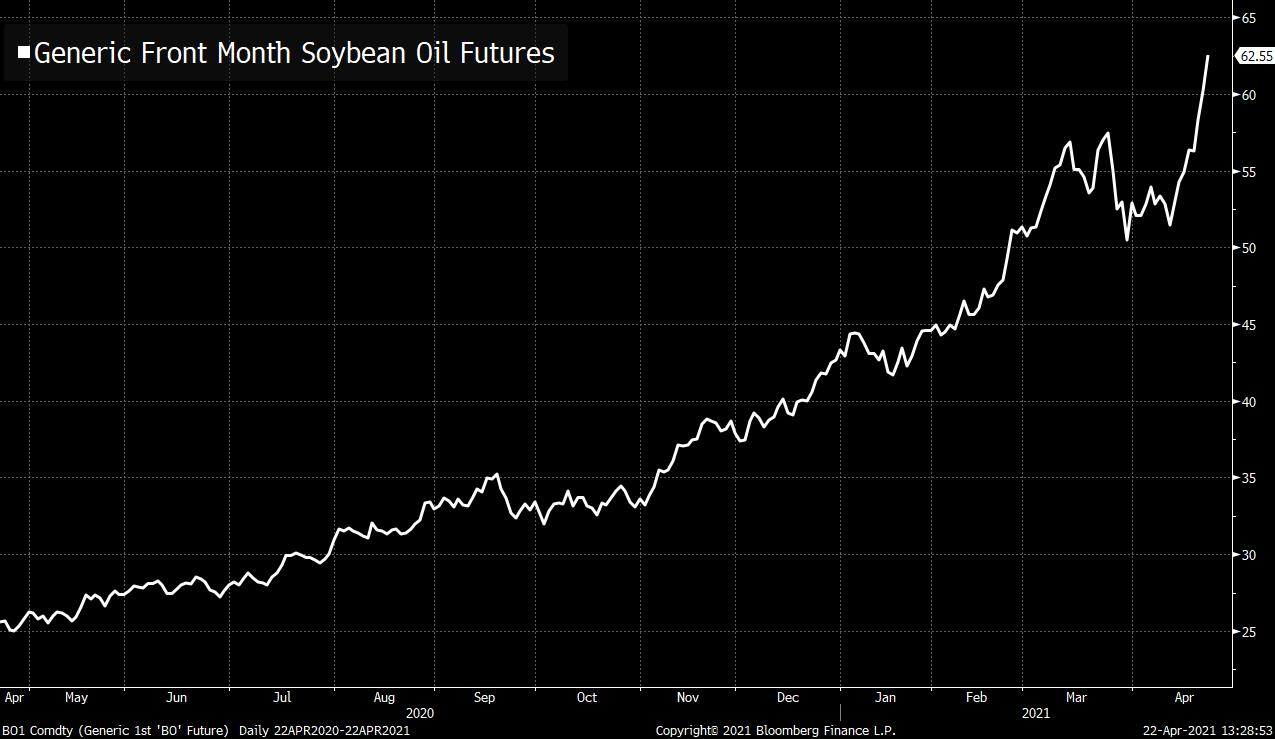 Let’s take another example: last year, the price of gasoline was $1.79 a gallon. Today, a gallon of gasoline costs $2.88.

It’s in the agricultural sector, however, that the sharpest rises are being seen.

The Bloomberg Agriculture Spot Index is going up at a rate never seen before in all the years it has existed: 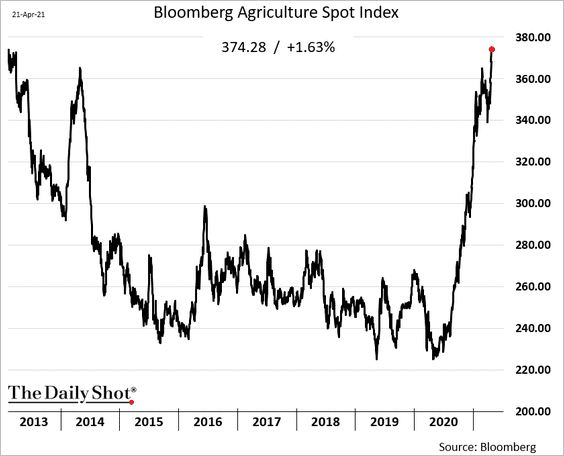 Meat is bearing the brunt of this general rise in prices too. Bolivia has just imposed a ban on beef exports, in an effort to counter the rise in prices and preserve its domestic demand.

Corn has just confirmed its breakout moreover, and is soaring to a record price: 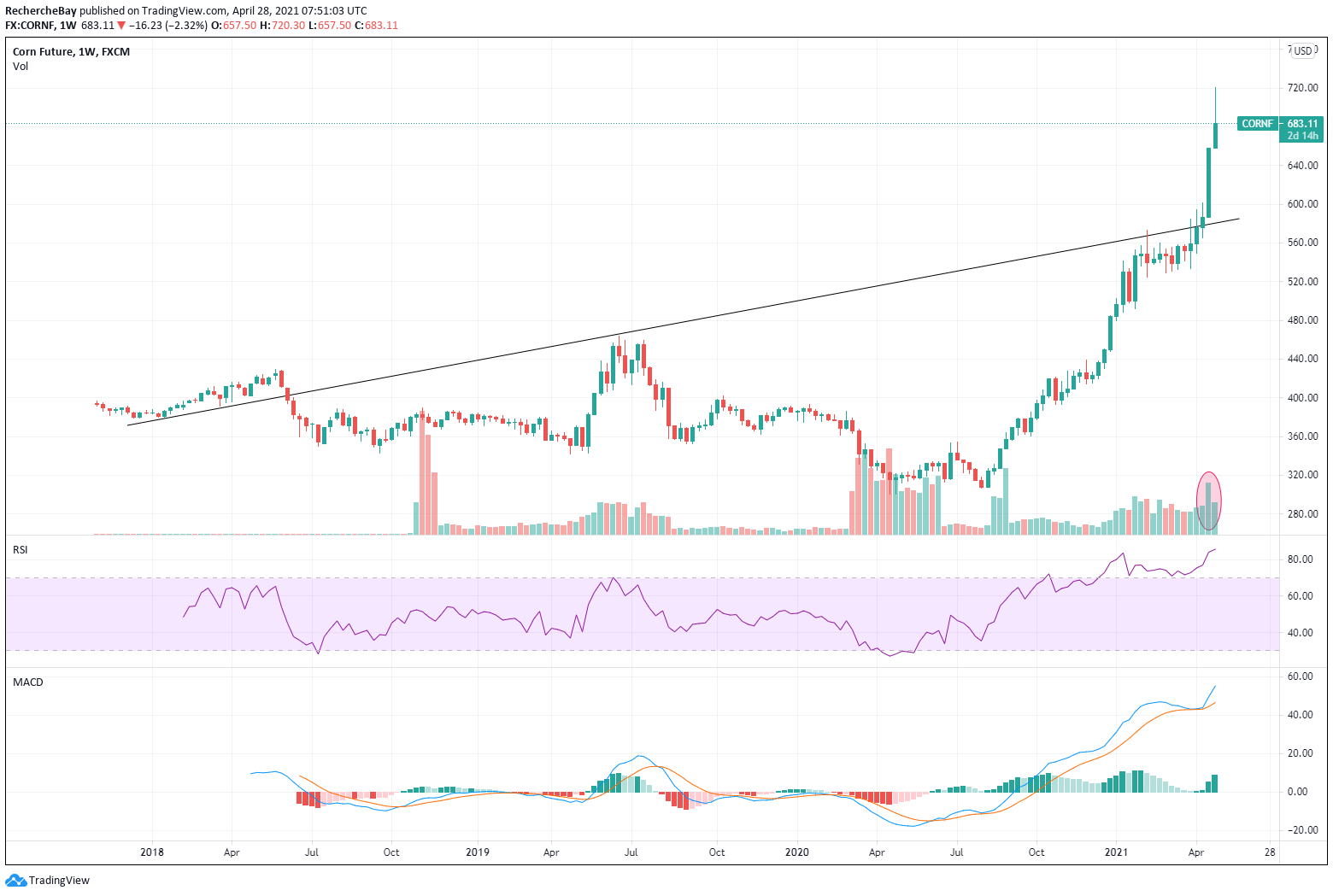 The rise in the price of corn is forcing growing numbers of U.S. cattle farmers to use wheat rather than corn to feed their herds, and this will doubtless have an even more inflationary effect on the price of wheat, demand for which has been rising incessantly around the world.

All the alarm signals are gradually turning to red as far as inflation is concerned.

The figures published by the Fed’s office in Dallas are fairly explicit. Expectations about the prices of finished goods are skyrocketing: 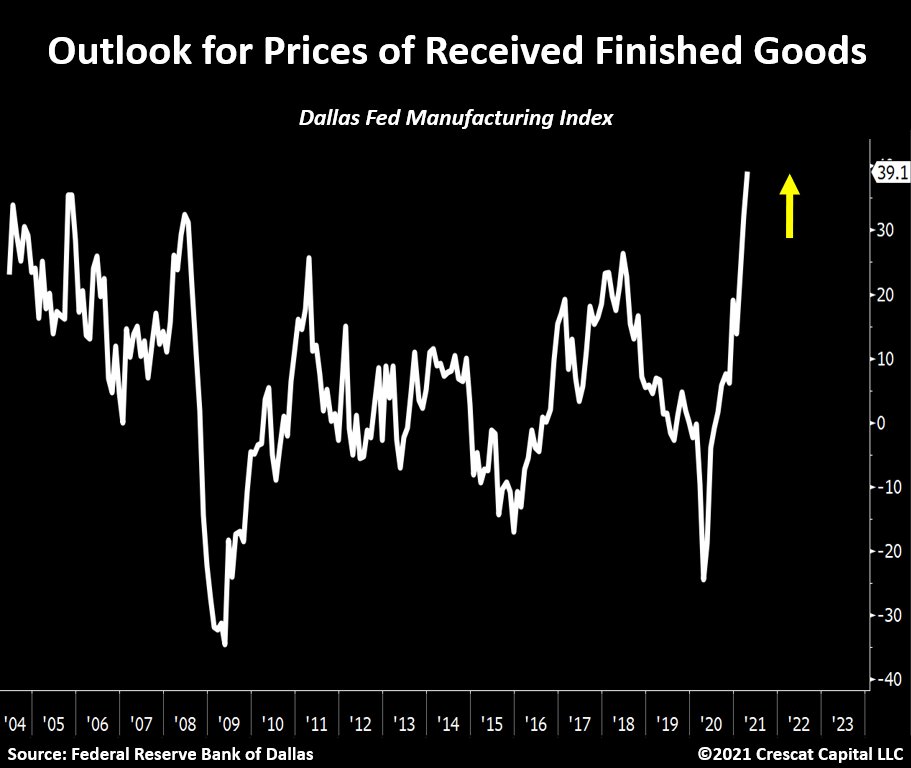 Inflation, too, is in the process of having knock-on effects on salaries: 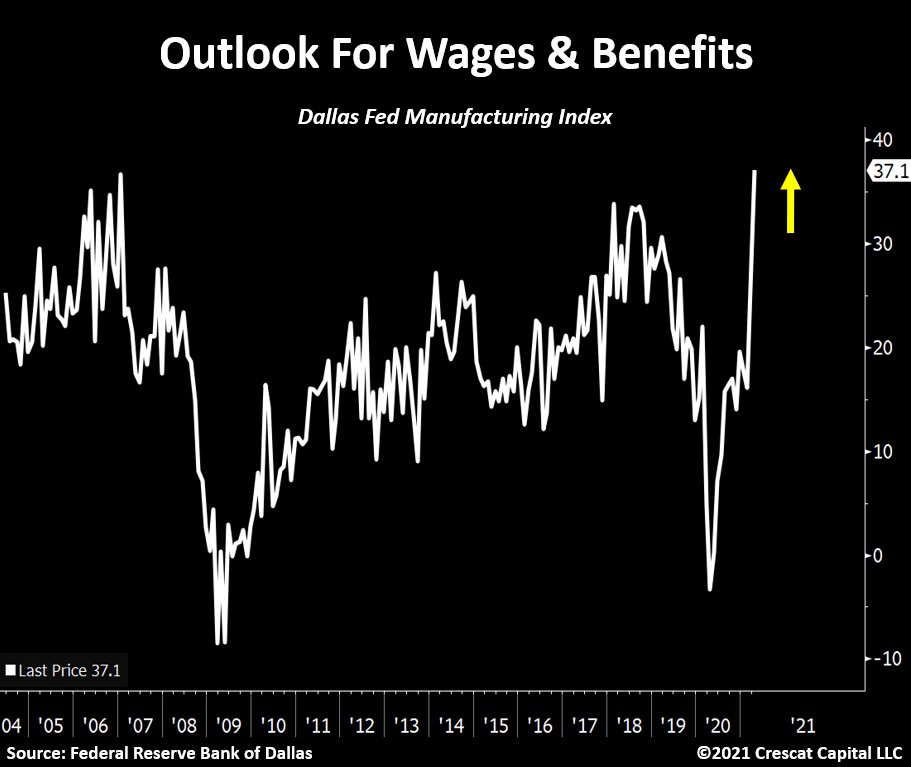 On top of the difficulties with supplies, there is also the difficulty of hiring and retaining employees whose wage levels have become too low.

Faced with this increasingly explosive situation, the Fed promised that it would not let inflation reach uncontrollable levels. The central banks are attempting to provide reassurance, by promising to use suitable “tools” to control a “temporary” inflationary phenomenon, associated, according to said central banks, with the “recovery” from the aftermath of Covid.

Listening to Mr Powell promise that inflation will be temporary is a bit like listening to Mr Bernanke, in 2007, when he claimed, before Congress, that the subprime mortgage crisis would be contained.

These price rises will be very difficult for the central banks to counteract.

How are Mr Powell and Mrs Lagarde going to set about stopping this brutal inflation in its tracks, without increasing rates aggressively?

For the only way to break an inflationary cycle is to increase rates brutally. This is the tool that a former director of the Fed, Mr Volker, used in 1980.

The situation in 1980, though, was different from the one before us today. To increase rates today would have a devastating impact on the markets, which have reached a record margin level. The value of each financial asset, today, is linked to these artificially low rates, and if we add to that a margin level that is at an all-time high, there is practically zero chance that the bubble will not burst in brutal fashion if Mr Powell changes his tone on the rates and starts talking like a grown-up. 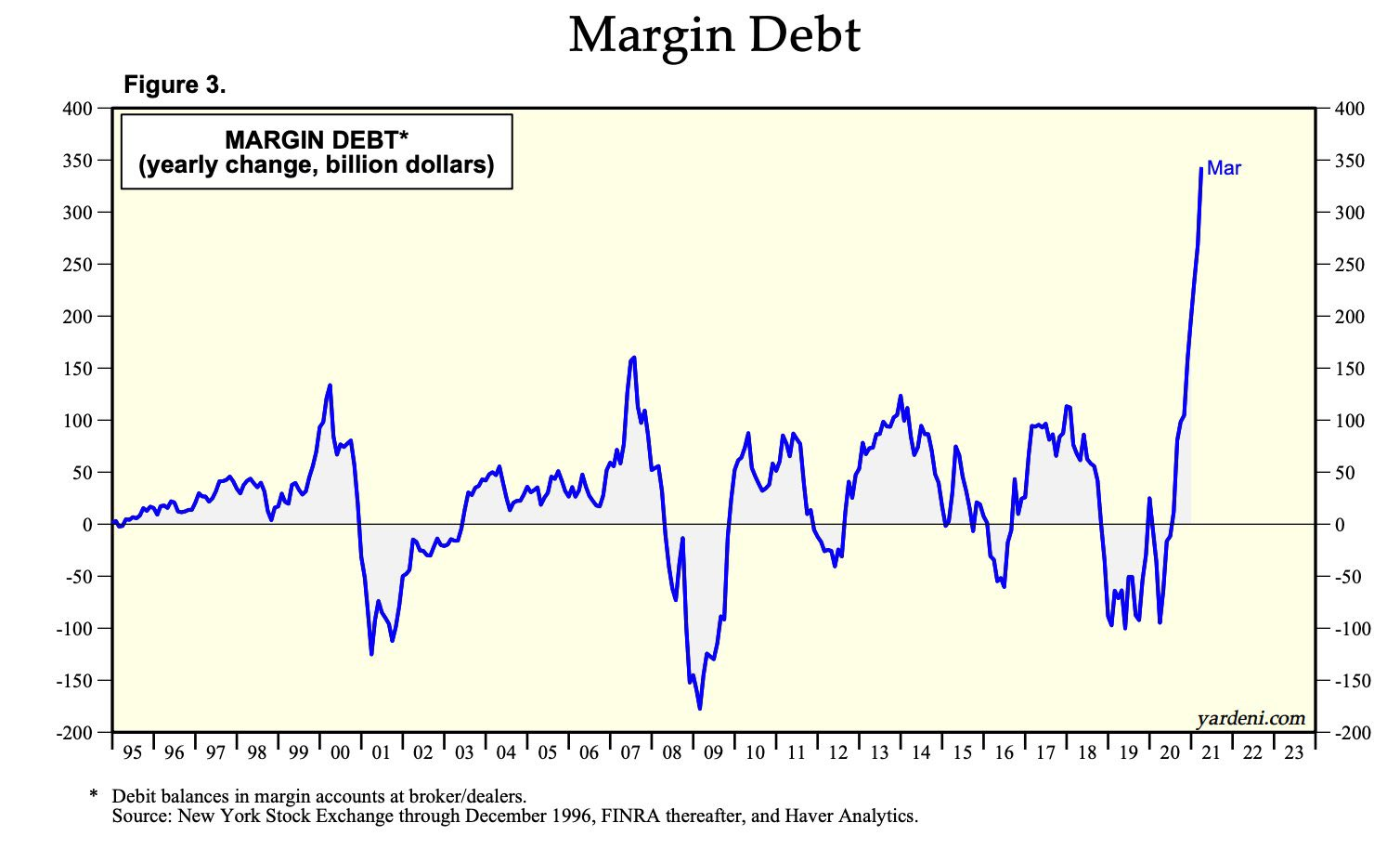 The Fed is in a bind right now. Either it lets inflation take its course, in which case the unpleasant effects of this inflation, that we are starting to see in real life, will quickly get out of control. Or it makes up its mind to change monetary policy, at the risk of making the financial asset bubble burst around the world.

The investors who are buying gold today are protecting themselves from both of these risks: the risk of currency devaluation (gold is a safe haven when fiat currencies lose their value) and the risk that this bubble will burst.

In relation to this last point, it should also be noted that gold has once again become a very attractive asset by comparison with all the stocks on the market.

This is measured on the GOLD/SP500 chart, which is ending a bullish harmonious figure (Crab) initiated in 2020. The MACD is going through a turnaround this week: 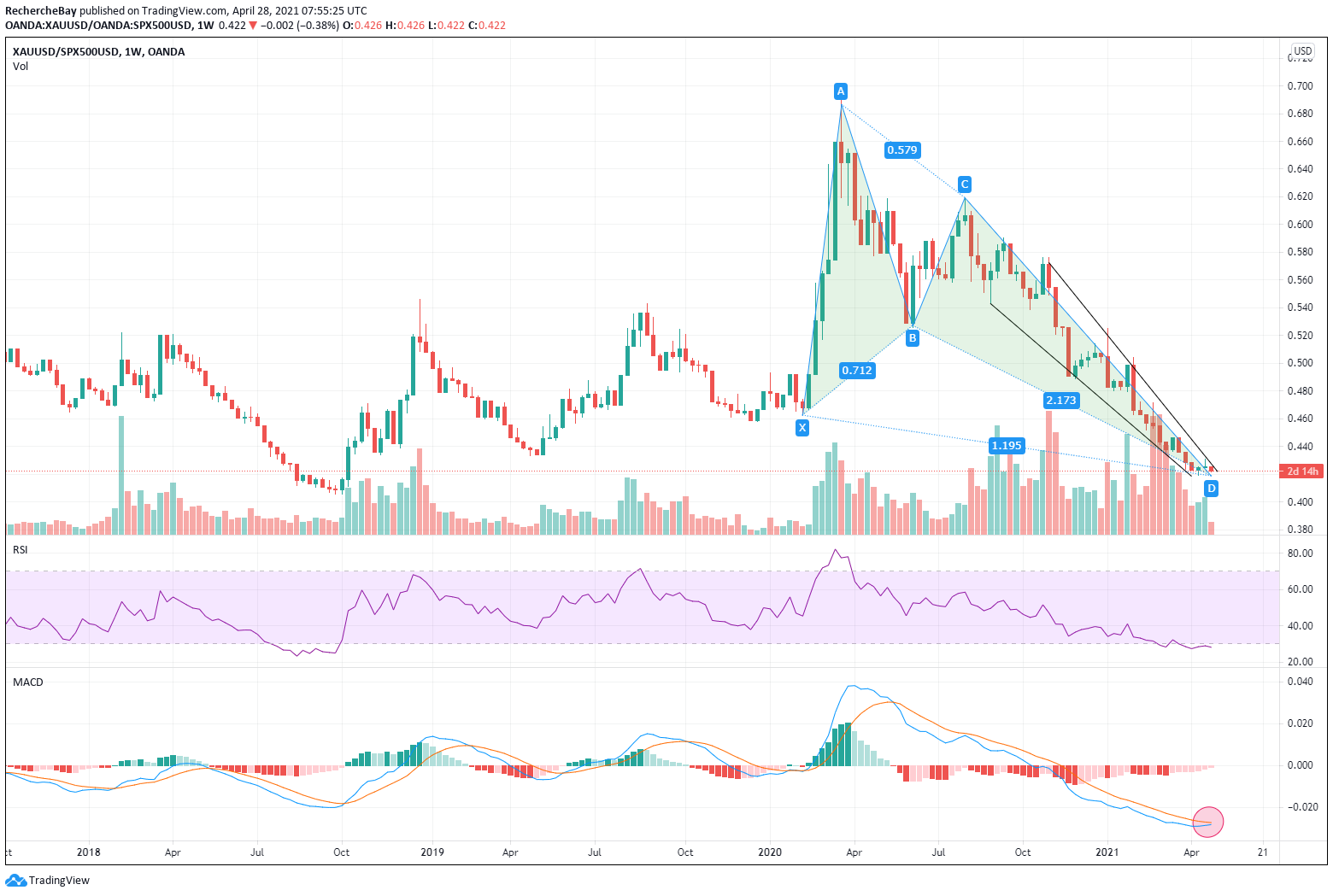 If we look at a longer period, we can measure the extent to which bullish energy has accumulated in this chart. This is measured both on the index itself and on the RSI indicator, which is on the point of releasing a considerable amount of upward energy. 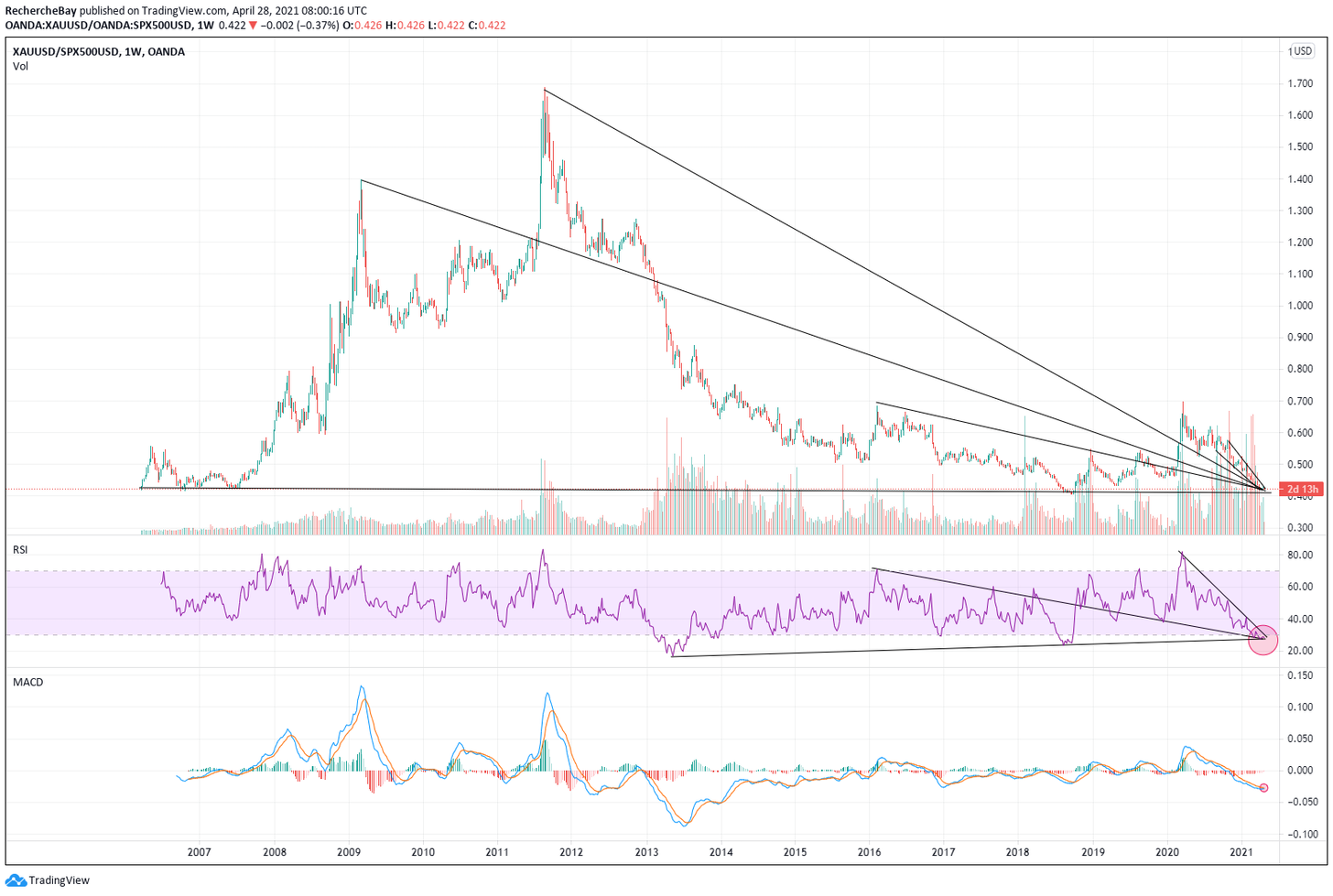 Gold is on the brink of outperforming the stock markets, and the risk reversal looks like it could be very brutal given the energy that has accumulated in recent years.

The mining stocks appear to be signaling the coming of this reversal.

This week, there has been notable upward movement in the mining stocks volatility index, and the MACD turnaround of this VXGDX index indicates that there may be some significant movement to come on the part of the mining stocks: 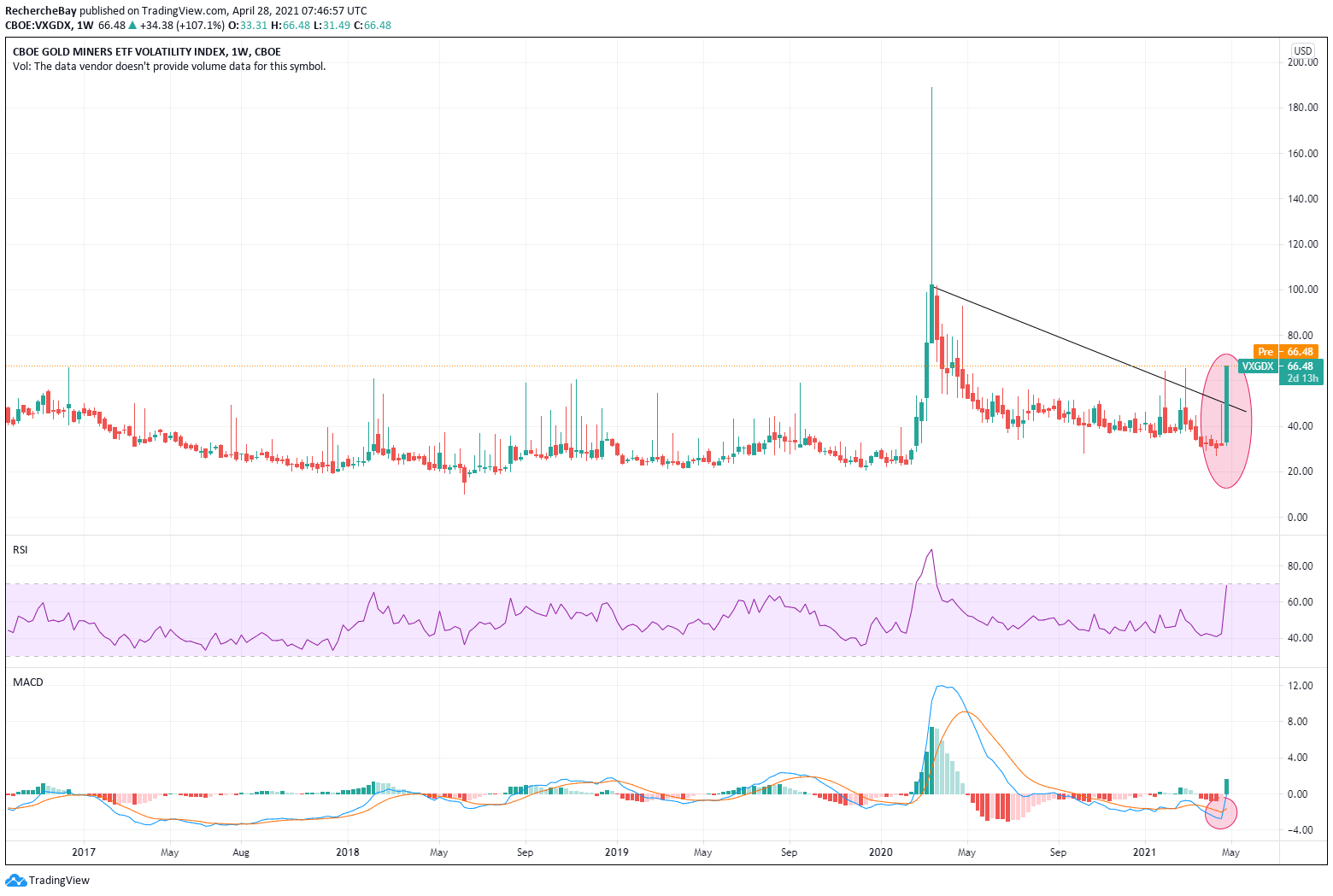 The news reports are once again focusing this week, though, on the silver sector. The Silver Short Squeeze movement launched by a community that now has more than 60 000 members is beginning its second act this week, to mark the anniversary of the “massacre” of the price of silver on 1st May 2011.

This community has become a force to be reckoned with in the silver market.

By contrast with what happened in the time of the Hunt brothers in 1980, the WallStreetSilver group are acting without a leverage effect, and their growing numbers are becoming a genuine threat to the bullion banks’ ability to control this market. 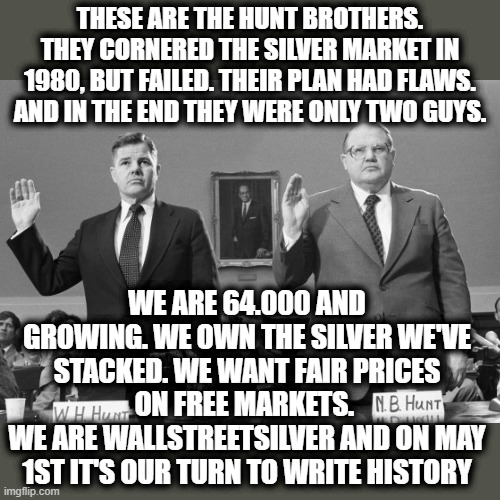 As the Comex’s stockpiles diminish with each passing month, there is less and less metal with which to “prop up” a derivative market that is only able to subsist because the margin effect is getting bigger and bigger.

Meanwhile, reserves of physical silver are diminishing all over the world.

The first three months of the year saw record sales of silver coins in the United States, for instance: 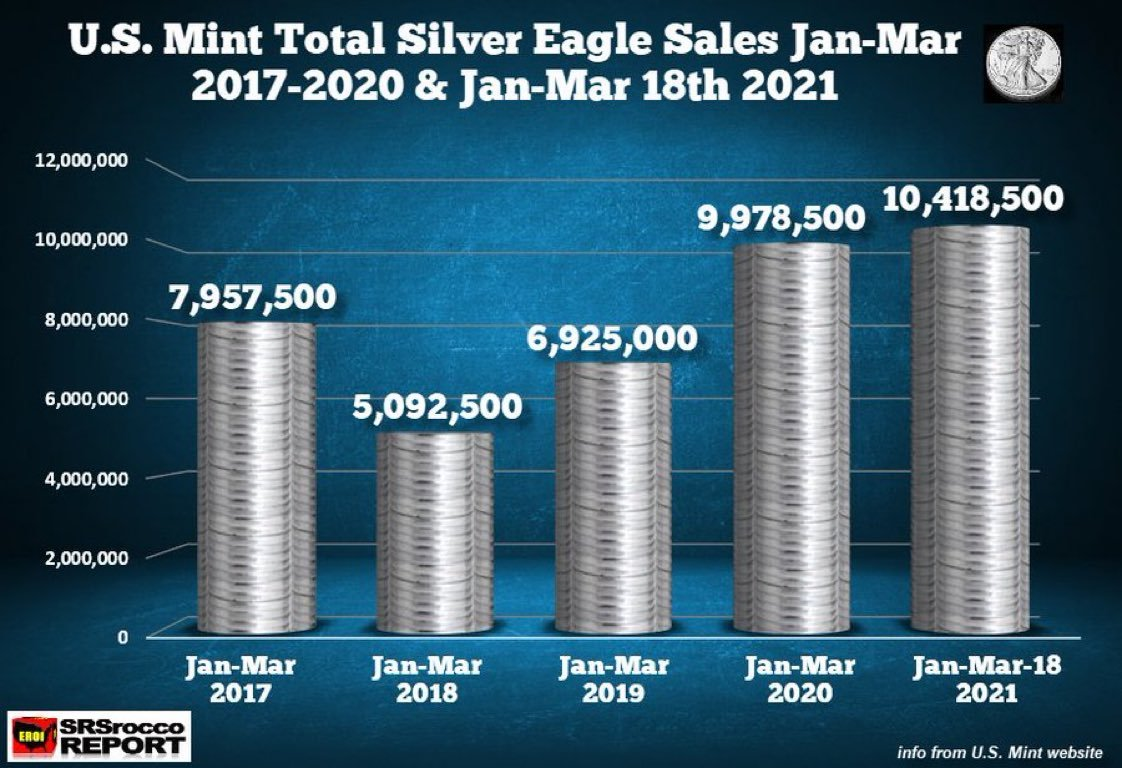 This week will see both the expiry of front-month contracts on the futures market, and a meeting of the Fed. The prices of precious metals are traditionally very volatile when these events take place.

This Saturday, 1st May, is also the day on which the WallStreetSilver community will go into a frenzy of silver buying.

There is a lot of action on the horizon, then... and there are still plenty of purchasing opportunities on the dossiers that I’m following closely.

The purchase of Roxgold by Fortuna Silver is one of the latest signs of consolidation in the sector. RoxGold is one of my favorite stories to come out of Africa. Last February, I wrote of the company: “RoxGold is a potential target for a major player looking for a genuine opportunity in Burkina Faso.” To tell the truth I wasn’t expecting a purchase to occur so soon... It’s true that the movement on the chart was very bullish, and that it would have been far more costly for Fortuna had it dithered over this dossier.

Against this backdrop, it’s of fundamental importance to identify the next targets among the mid-tier producers.