Last week, more than 4 million people quit the labor market in the United States. That is an all-time record: 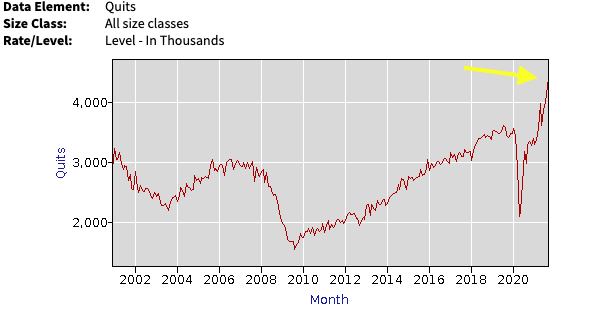 This figure has left most economists astonished: when there are so many job vacancies out there, how are we to explain the fact that so many Americans are quite simply turning down the positions that are offered to them?

The economist Paul Krugman attributes this to the fact that wages are too low, particularly in the logistics and transportation sector, where the salary levels have remained unchanged in real terms since 1995:

Why do we have a shortage of truck drivers and warehouse workers? It's a deep mystery pic.twitter.com/SoYtAQb8An

At a moment when inflation is waking up, the fact that salaries are too low is provoking shortages of workers in the lowest qualified sectors.

Today, the entire middle class finds itself at a disadvantage by comparison with the higher classes, because the gains in productivity have been more beneficial for the asset classes held by the professions higher up the social ladder. This is not a new fact, but what is remarkable today is the fact that it is the waking up of inflation that is crystallizing this gap in real-terms incomes, between a middle class that was forgotten by 30 years of growth...and a class of privileged individuals who have benefited from unprecedented enrichment in a context that has been very favorable for financial assets, facilitated by the excessive use of the money printing presses.

The comeback of inflation is prompting this sudden and surprising resignation of an ever larger portion of the U.S. population, who are now rejecting the salaries that are too low, and seeing whether they, too, can take advantage of the soaring of the Stock Exchange, and attempt, in their turn, to benefit from the returns on their own capital, rather than the fruits of their labor, which is now undervalued. This is even more true for the young generation, who have been very active in the recent speculative ‘coups’ on the Stock Market. In recent months, veritable fortunes have been made thanks to the trading of ‘Meme stocks’ on junior portfolios that are raising questions over the classic institutional approach of market valuation. The monetary policy of liquidity injections, into a financial system that is already chock-full of them, has also had consequences on the classic approach to investments. Since “the Fed is supporting the markets” became the fashionable credo, the risk has increased significantly. Prudent investment strategies have given way to ‘tracker’ betting methods that have had impressive yields, as is often the case during the final stages of a speculative bubble’s expansion. This mania, which now affects several million day-traders, is also one of the reasons for a growing disaffection with the less well-paid positions among the more active, younger members of the population.

For those who are in the real world, inflation has a direct consequence on the morale of U.S. households, which are sinking to an 11-year low: 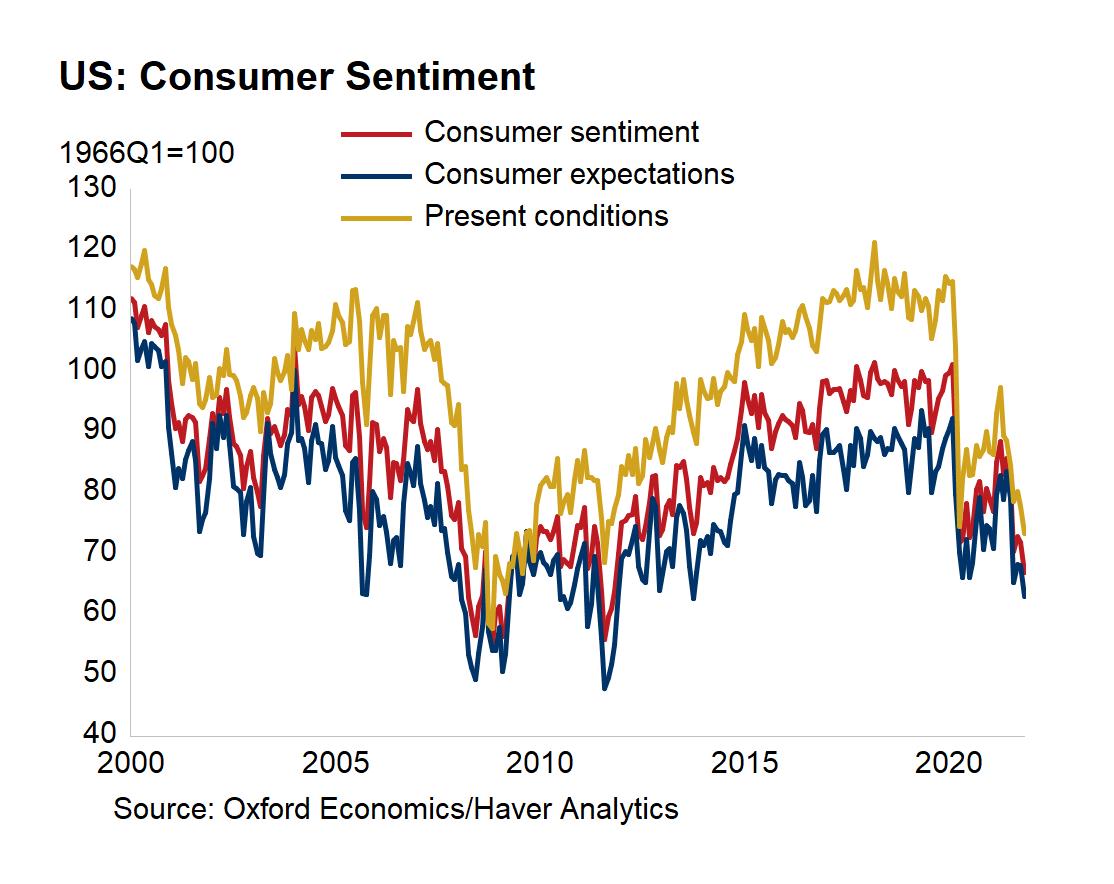 At the current rate of inflation, a hike in annual salaries of less than 6% represents a net loss of income. Who, on the very bottom rung of the ladder, can negotiate a raise like that?

Far from these material considerations, the Fed, for its part, is continuing to print money at the same crazy pace as before.

The Fed monetized $88.2 billion last week, taking its balance sheet to almost $8.663 trillion. The central bank promised to reduce its asset purchases, but by refusing to hike its rates and continuing to grow its balance sheet, it is exacerbating the rise in prices even more. There is ever more money in circulation, chasing fewer and fewer tangible assets available. How do you expect the inflation to dissipate, in those circumstances?

The official figure for inflation in consumer prices in the United States is +6.2% in a year, but the rise in prices that people feel is in fact much higher. If one were to use the same methods for calculating the level of prices as were used in the 1980s, the rise felt would in fact be much closer, today, to +15%: 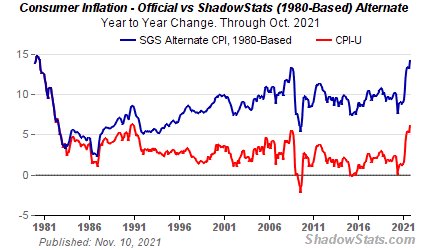 It is likely these extreme feelings about the rise in prices that is making Americans’ morale plummet...another element that has undoubtedly driven so many active workers to literally throw in the towel, at a time when it is cheaper to go and work than to stay at home!

This resignation is starting to affect the employees most affected by the explosion in inflation. Social tensions logically begin in the places where currencies lose their value fastest.

As is often the case when a national currency collapses, the fall in the Canadian dollar is being accompanied by an unprecedented real-terms fall in salaries, and is plunging one of the leading players in the food sector, Cargill, into a crisis like nothing it has seen before. The forthcoming strike looks set to push the price of beef even higher; Cargill is responsible for 40% of the distribution of beef in Canada.

Faced with the social disaster that is coming, the central banks concerned by this brutal comeback of inflation ought to tighten up their monetary policies as a matter of urgency. As we have emphasized so many times in these articles, however, these banks are far more concerned by the reaction of the bonds market in the event of an overly brutal change to their accommodating policy.

The announcement of the reduction in the Fed’s assets has already forced the ‘primary dealers’ to purchase 25% of the 7-year U.S. Treasury bonds put up for auction last week. These auctions are the worst since 2010. This makes a fair amount of sense: fewer and fewer investors want to be remunerated at just 2% when inflation is at more than 6%... In a context of monetary tightening, these investors are now demanding better returns.

So do you allow the inflation to take its course, and take the risk of increasing social disorder? Or tighten up the monetary policy too brutally, and provoke a seismic event in the bonds market? Who on earth would want to be in the shoes of Mr Powell, today, and have to decide which is the least painful option?

The recent return to form by gold is an indicator of these doubts about the monetary capacities when it comes to emerging from this impasse.

On the charts, the gold price has crossed the zone of $1835 without too much congestion, in a confirmed breakout . 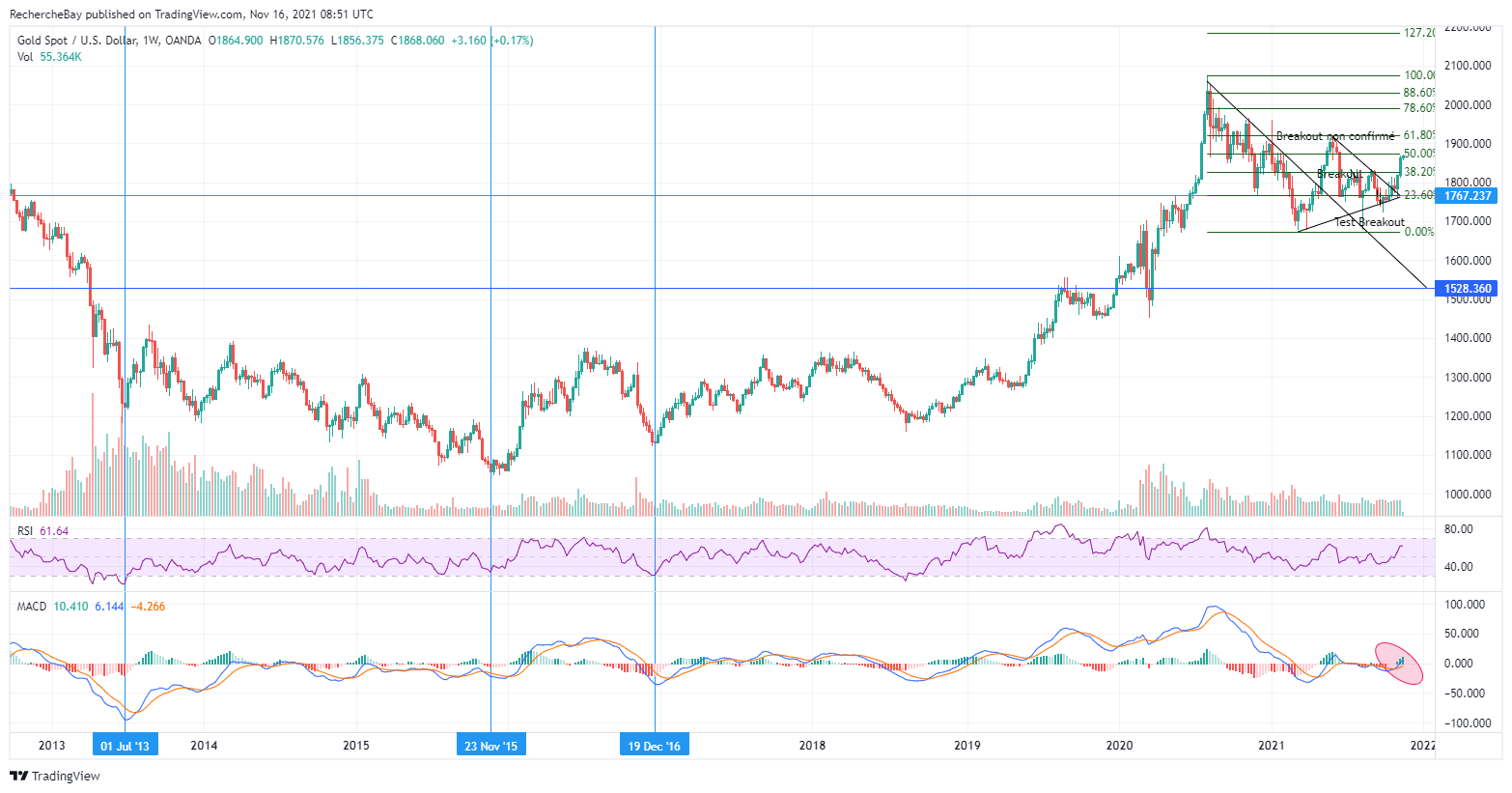 The mining stocks are starting to outperform the SP500 index, moreover.

On the charts, the GDX/SPX500 ratio is in a configuration that is equivalent to the one at the start of 2016 and the end of 2018, and that ought to lead us, at least, to a bounce-back by the mining stocks sector by comparison with the other stocks on the market. 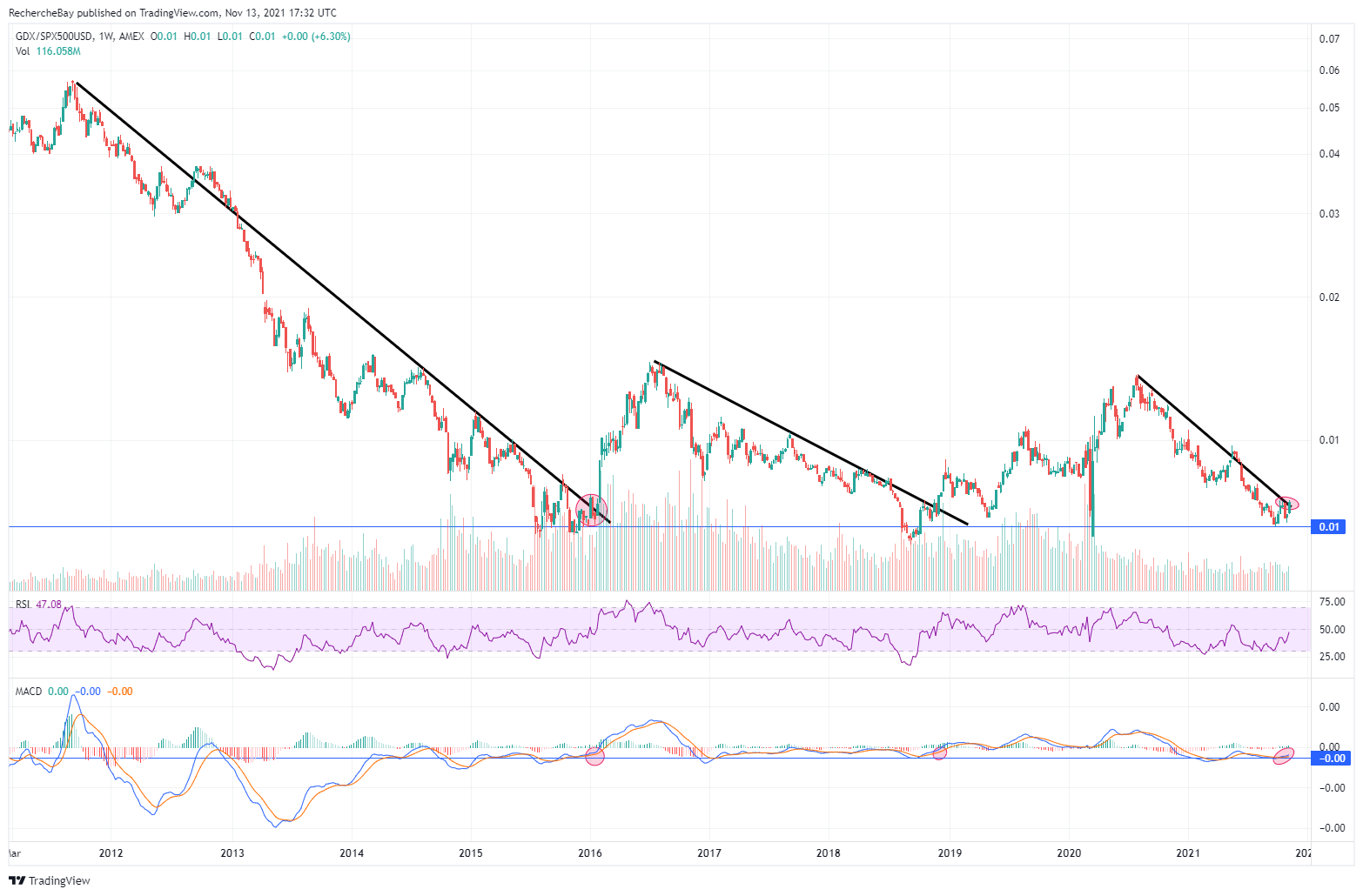 The mining stocks sector is still in the process of rebounding from record lows, meaning that we still have quite a lot of opportunities to accumulate equities at prices that still represent bargains.

A little note to end on: on the silver stocks on the COMEX, which are continuing to decrease at the same pace as in the last few weeks:

This week, I am in London for the first in-person mining investment conference and exhibition to be held in Europe for 2 years. I’m looking forward to ‘feeling’ the sentiment in the sector up close, particularly as regards the junior minings.