Happy New Year to all our readers! I wish you great success with your investments, but above all good health and plenty of positive energy for you and your loved ones.

This year, 2022, is getting off to a strong start for precious metals, a segment that I try to decipher as best I can through my articles.

Gold nose-dived on large volumes in the first few hours of 2022, with a substantial sale of contracts in the very first few minutes of trading. On the silver futures market, these first sales already represent, in one go, several months’ worth of production... For those who were unsure, 2022 will doubtless see no reduction in the leverage effects between the paper markets and the physical ones!

As of this current quarter, the new Basel III rules require financial intermediaries to set out in a more detailed way their positions and the way in which they are covered: we will see whether these new rules offer the level of transparency expected (this will all be scrutinized in the quarterly reports distributed from the end of March onwards). Between now and then, the volatility is by no means ready to subside.

This is the time of year when it is necessary to consult the major institutions’ forecasts regarding the evolution of the gold price in 2022.

Among these forecasts, two are particularly bearish: Crédit Suisse is announcing a gold price below $1500 and JP Morgan is expecting to see a fall toward $1520 in the fourth quarter.

These forecasts must always be taken with a pinch of salt.

In 2014, the bank ABN Amro launched a bearish warning on gold, explaining to its customers that it was time to reconsider gold's traditional role as a safe haven. At that point, gold was being traded at a price around $1100, a record low in the last ten years. Technically, there was nothing to justify such a warning. Why push its customers toward the exit door at a time like that? Why was there a need to discourage so many holders of gold at that precise moment?

Six years on, the same bank forced more than 2000 of its customers, who were still clinging to their contracts and holding unallocated metal accounts, to close down their accounts.

This episode helped to spread doubt about all of the unallocated gold accounts in the community of precious metals investors. Numerous ‘goldbugs’ are still wondering today: was the gold that was allegedly kept by an intermediary of the bank really reserved for the customers of ABN Amro?

Ever since that episode, whenever a bank that also acts as a custodian issues a brutally bearish warning on gold, it raises doubts about the accounting of physical gold or silver actually held on behalf of its clients.

What good would it serve a bank to encourage its customers to sell their metal (particularly given that the bank collects sizable storage fees)?

When a bank prompts its unallocated customers to sell, this enables it to limit the risks associated with rehypothecation: when you sell to several people at the same time, you are delighted to see those with the weakest hands letting go of their commitments, at a time when the new constraints associated with Basel III are imposing better traceability of the contracts...and at a time when the available inventories of gold and silver are diminishing.

This has been the deal since last year: the inventories of precious metals available are in constant decline.

Last year, the central banks bought record quantities of gold. The central banks’ gold reserves are heading toward record levels. Globally speaking, they haven’t had so much gold in their vaults for 31 years. It will be noted that the reserves are increasing at a time when the central banks are preparing to launch large-scale monetary reforms, a notable aspect of which is the transition to a digital currency... In the context of these reforms, gold risks playing a significant role as collateral. These sustained purchases confirm as much to us. 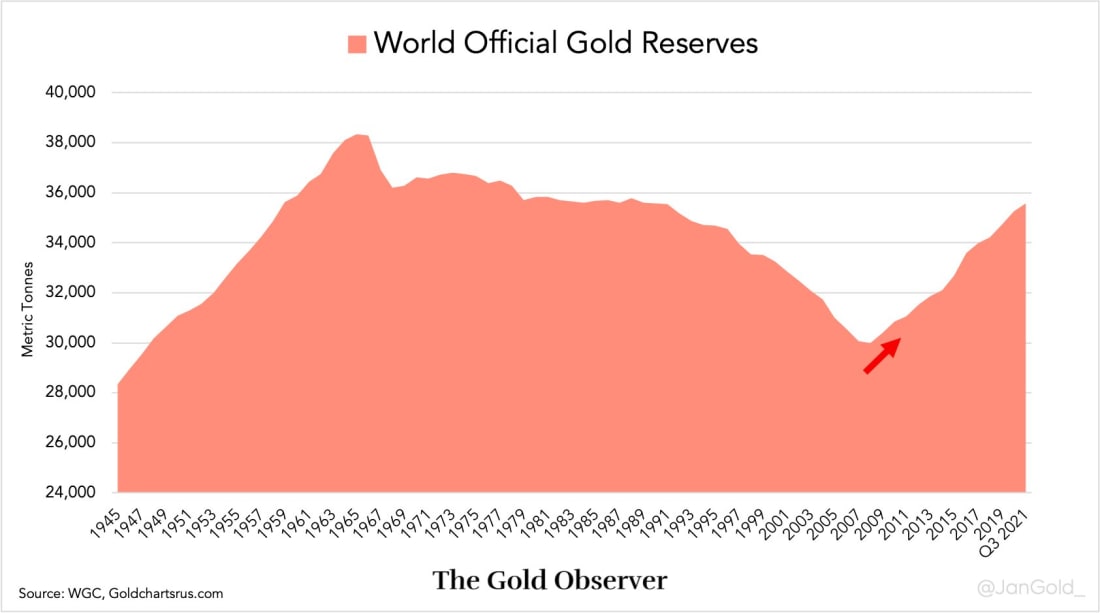 This rush on precious metals is also affecting the available inventories on the futures markets:

COMEX UPDATE
- #Silver continues to flow out of the Registered category, this time at JPM to the tune of almost 280k oz! #silversqueeze
- The charts below show just how much Registered stock has dropped in the last year!
- #Gold saw very large outflows from the Eligible category. pic.twitter.com/I1vh6fmRZ9

The fall in the inventories on the COMEX has in fact accelerated in recent weeks, particularly in relation to silver. Almost 20 million ounces of silver have suddenly disappeared from the ‘registered’ category. It is impossible, obviously, to know what this sleight of hand really corresponds to, and which bank it concerns... As a reminder, no audit has thus far made it possible to obtain an accurate picture of the precise allocations of inventories of precious metals that serve the operation of the futures markets. The technical solutions are there, however. The Blockchain technology, for instance, could allow for better traceability, so as to guarantee increased transparency on this market. We can allow ourselves to dream...

A long way from these considerations, the gold prices are, for the time being, far more sensitive in the short term to the ‘sentiment’ dictated by the automatic trading tools which react, primarily, to the variation in the real yields and in the dollar.

The U.S. yields are recovering as the year begins, anticipating a gradual recovery in 2022 (let us remember, after all, that the Fed has not even brought an end to its asset purchase program yet!).

Inflation is slowing down its rise somewhat, with an ebb in the prices paid by consumers, which corresponds to last month’s pause on certain commodities. Unfortunately, this slowdown is likely transitory. We note, indeed, that the upward movement in commodities resumed this week. This is the case for construction lumber, which is heading toward record highs again: 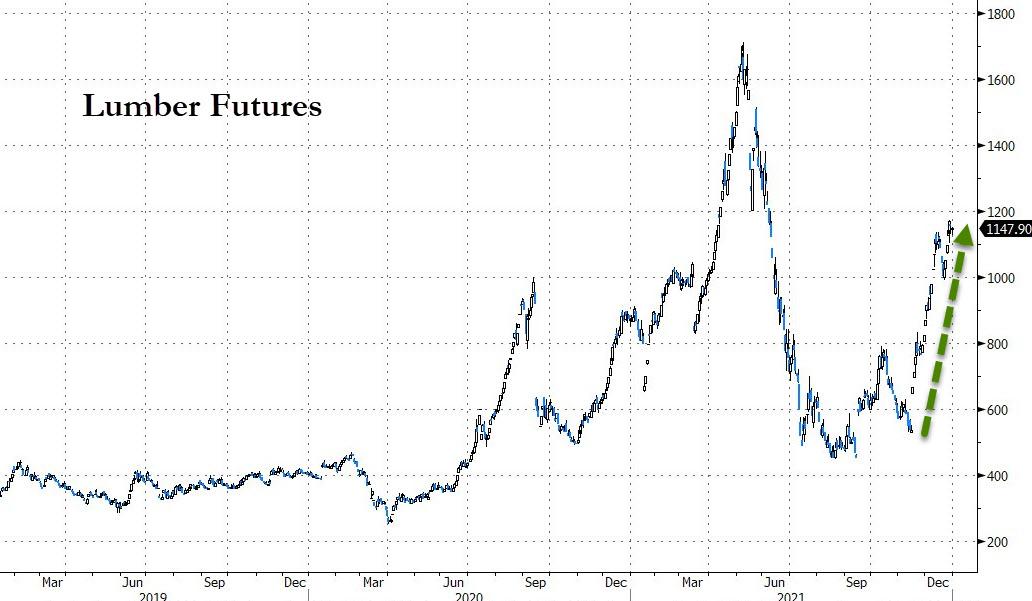 The prices for transporting goods from Chinese ports are also heading up again: 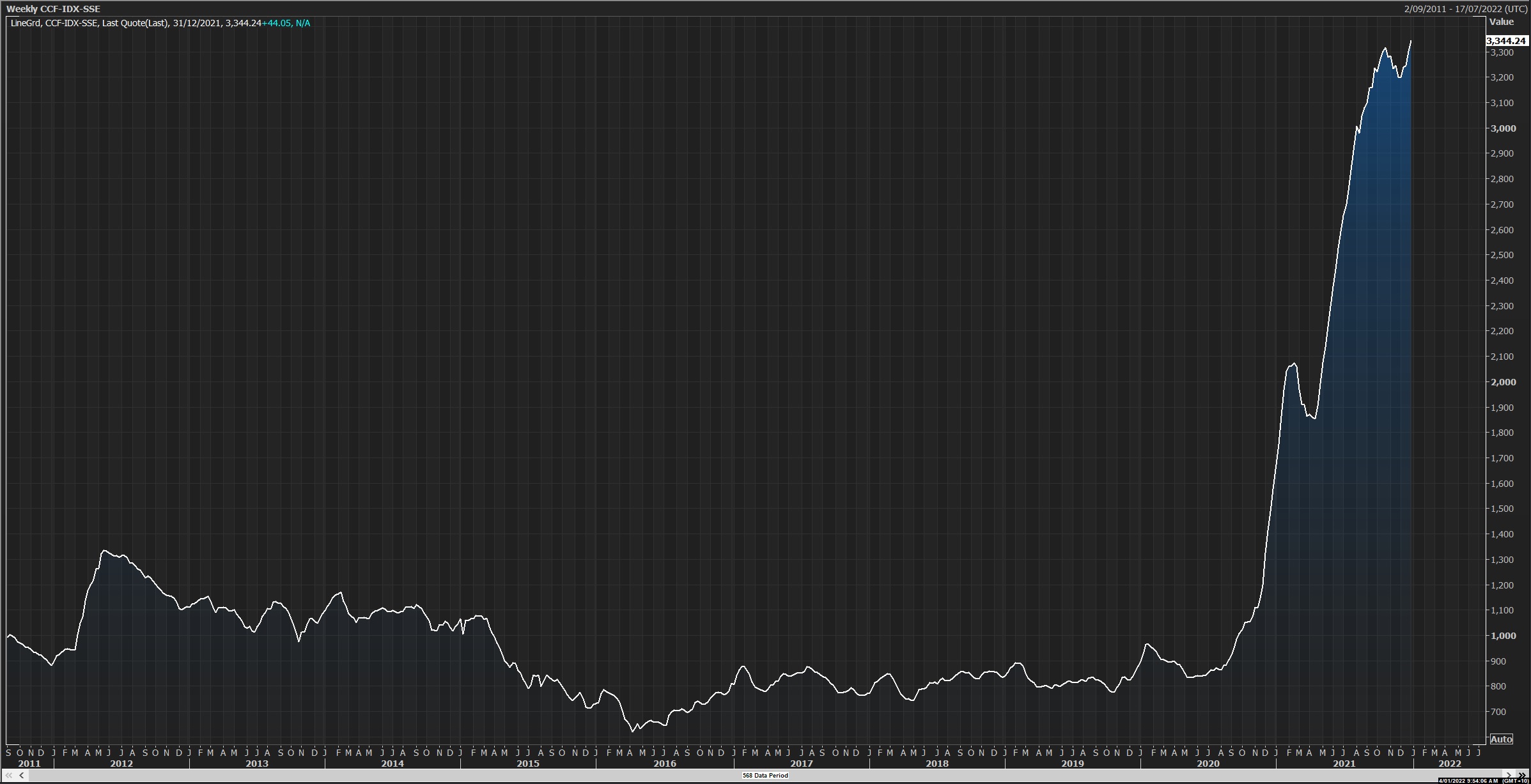 The energy crisis is becoming more acute in Asia, too. This week, Indonesia decided to halt is exports of coal in order to preserve its domestic consumption, depriving China of essential resources for its own power stations. Indonesian coal accounts for 60% of Chinese imports!

With the energy crisis in China, this rise in transportation costs is unfortunately banishing once and for all the notion of 'transitory inflation' at global level.

Even if the rates rise again in expectation of the upcoming decisions by the Fed, the real rates do not, ultimately, have a big margin of increase in such an environment of continuing inflation.

The dollar price is the other determining factor for the gold prices as the year begins.

At present, the greenback is attempting to break a major resistance that numerous traders are monitoring: 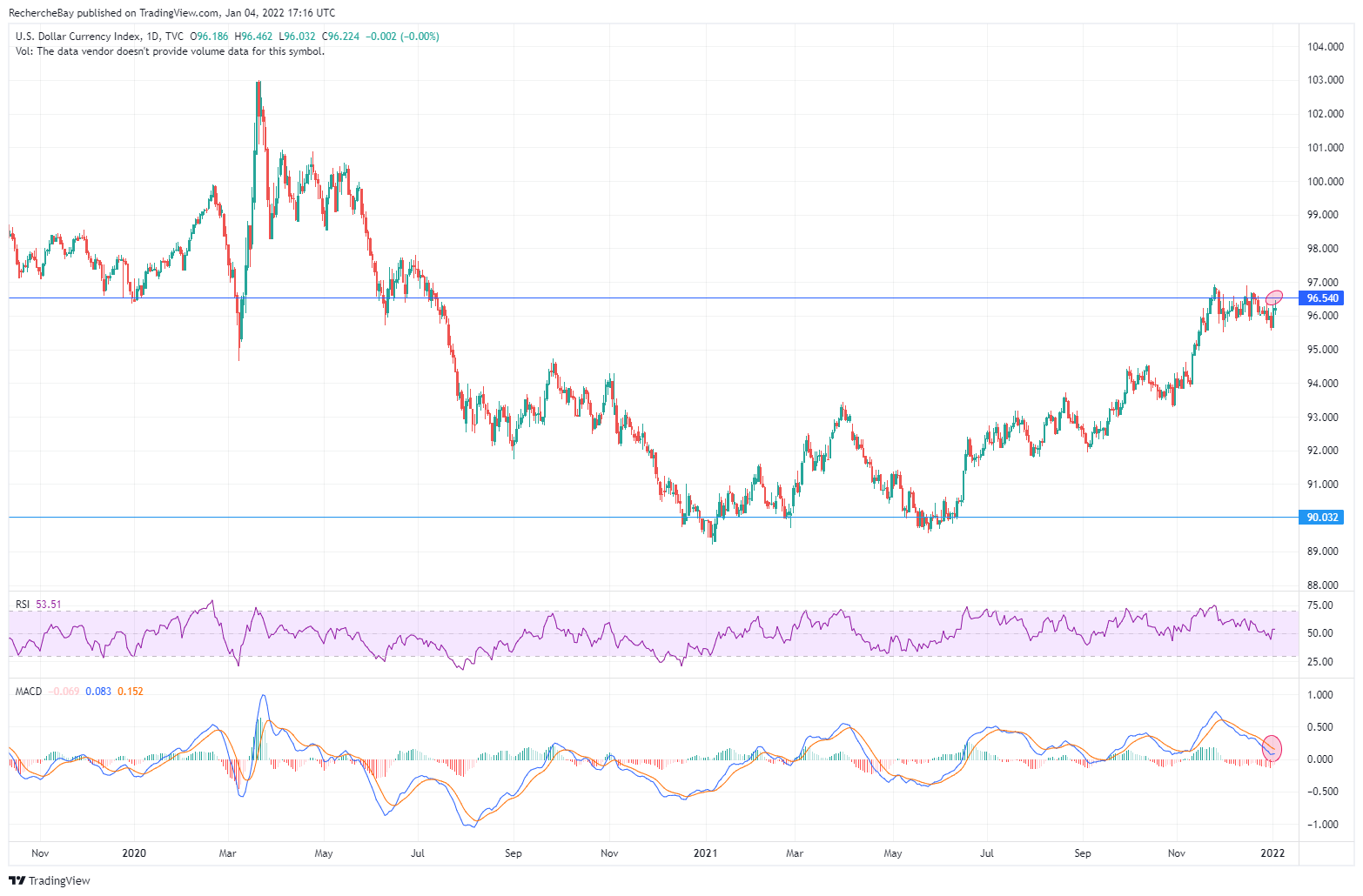 The hedge funds are very bullish in the short term. Never before have they opened as many speculative bullish positions as they have in the last two years. 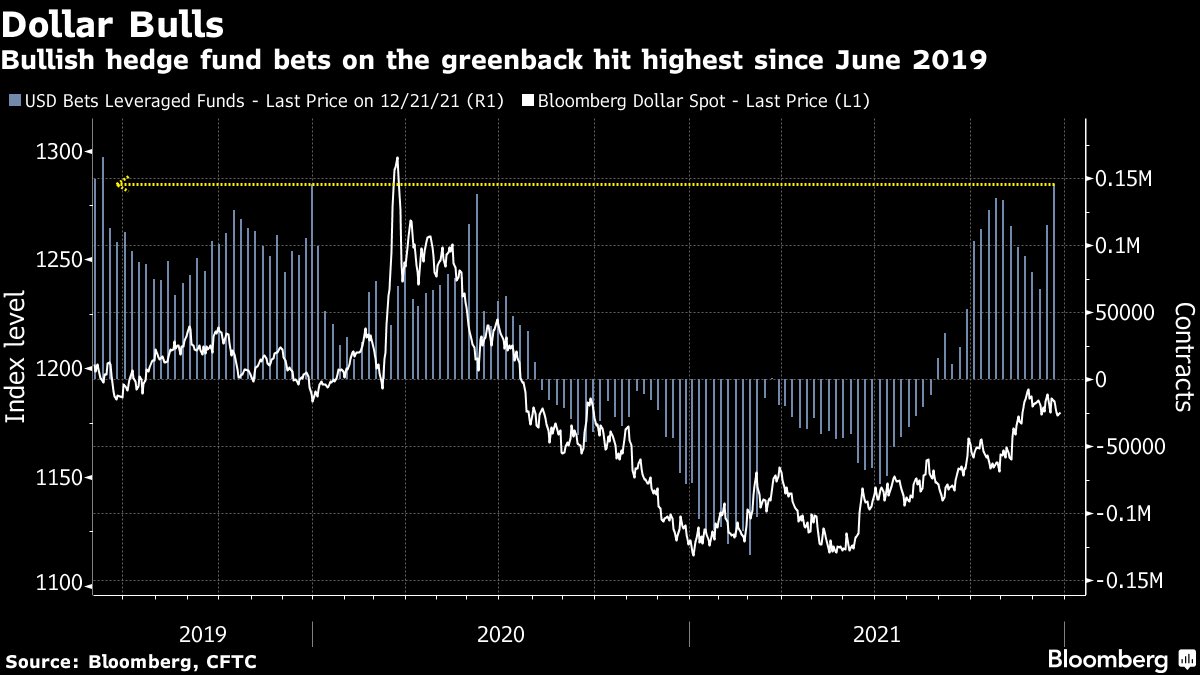 If things happen the same way they did last time, the potential for a rise in the U.S. currency is not very high in such conditions.

These two observations about the real rates and about the dollar do not allow us to foresee a significant level of correction to gold in the short term toward $1500.

The two factors that act on the variations in the prices do not have sufficient potential for increase to prompt such a decline.

The physical market is under far more strain, moreover, particularly as regards silver.

The demand for exposure on the tangible metal is limiting short selling on the futures market.

In contrast, and against all expectations, we may even see some surprising bullish movements, precisely because of this tension and the impossibility of certain banks being able to get out of the inextricable short positions they are in. In 2021, we witnessed genuine short squeezes on numerous commodities, with the physical demand having suddenly forced the derivatives markets to adapt to new rules. Platinum, gold and silver have not, thus far, been through such movements.

2021 was declared to be a year of increase for gold and for silver. But the much-anticipated short squeeze on silver did not take place. The precious metals had a difficult year, despite the optimistic forecasts made by Goldman Sachs, in particular, at the end of 2020.

2022 is beginning in a very different environment than that of last year. The forecasts for gold are bearish this time, with the expectation of rises in the Fed’s rates.

Could 2022, against all expectations, turn out to be the year of precious metals?