The image of the week comes from China, where half of the country is under strict lockdown. Ninety percent of the most populated cities are under quarantine and most coastal roads are closed. Maritime Traffic published an impressive image of ships waiting to be unloaded at the port of Shanghai. It quickly went viral: 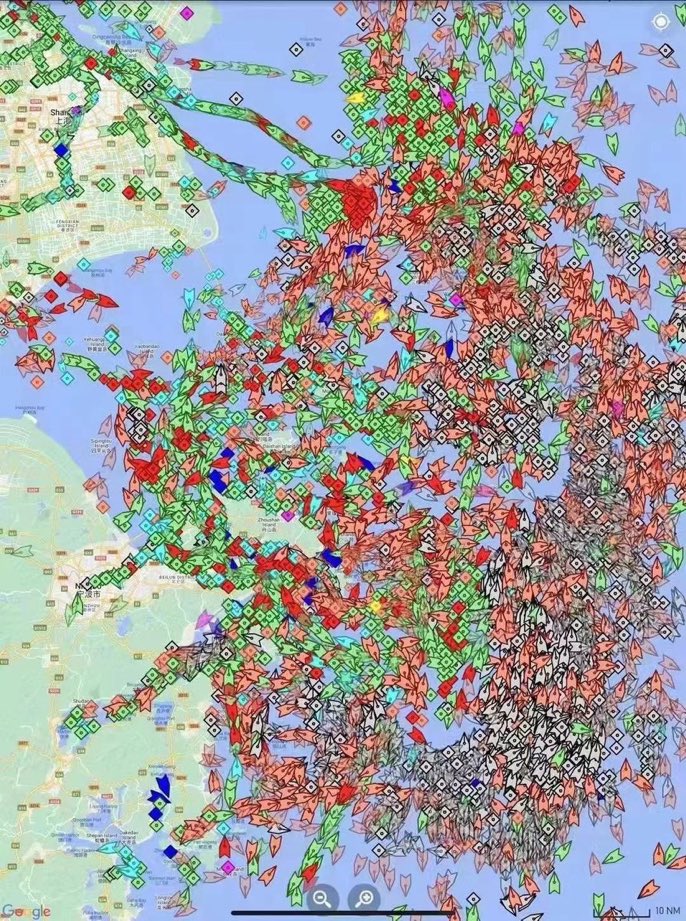 This image shows the even more devastating effects of the country's 'zero-COVID policy' than in 2020. There are now more than 500 ships waiting off the port. The workshop of the world is at a standstill. This brutal interruption of trade with China risks turning the congestion of the production chain into a real logistical nightmare. All industries could be impacted in the short term, radically transforming world trade, while inflationary pressures are unfortunately expected to continue over the coming months.

This week, a Bloomberg article looks at the consumption restrictions associated with rising prices: 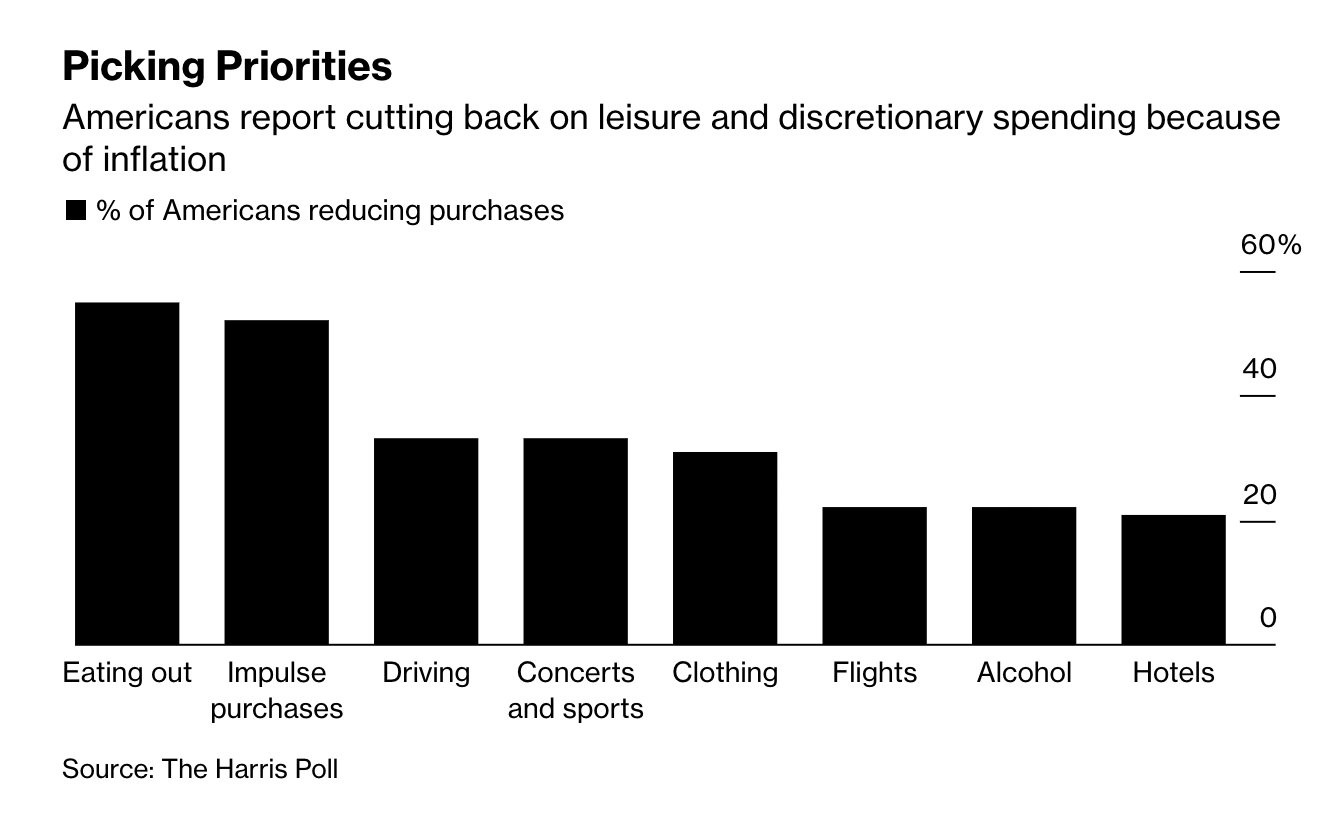 These restrictions are likely to be amplified if the supply chain becomes more tightly constrained, reducing supply and further fuelling the inflation associated with the bottleneck.

Inflation-adjusted retail sales were down last month. The price increase felt by the consumer is now so significant that it is reducing the net value of sales: 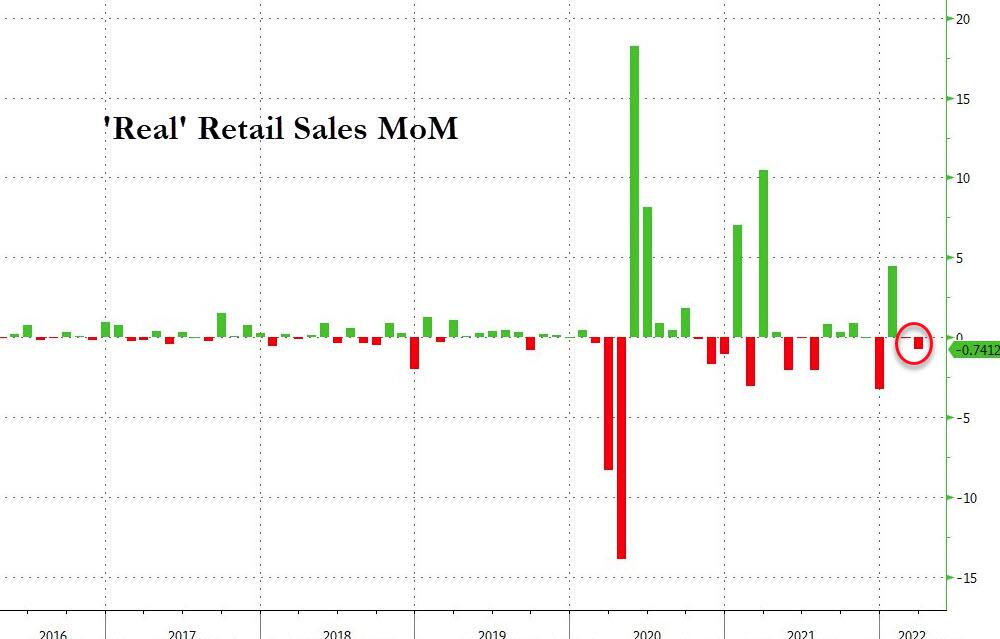 The destruction of demand caused by China's sudden shutdown, combined with the expected slowdown in US consumption, leads FocusEconomics' panelists to forecast a 2.9% year-on-year drop in commodity prices in the fourth quarter of 2022. This forecast applies to all commodities and, according to the panel of economists, precious metals will also be impacted by this downward movement: 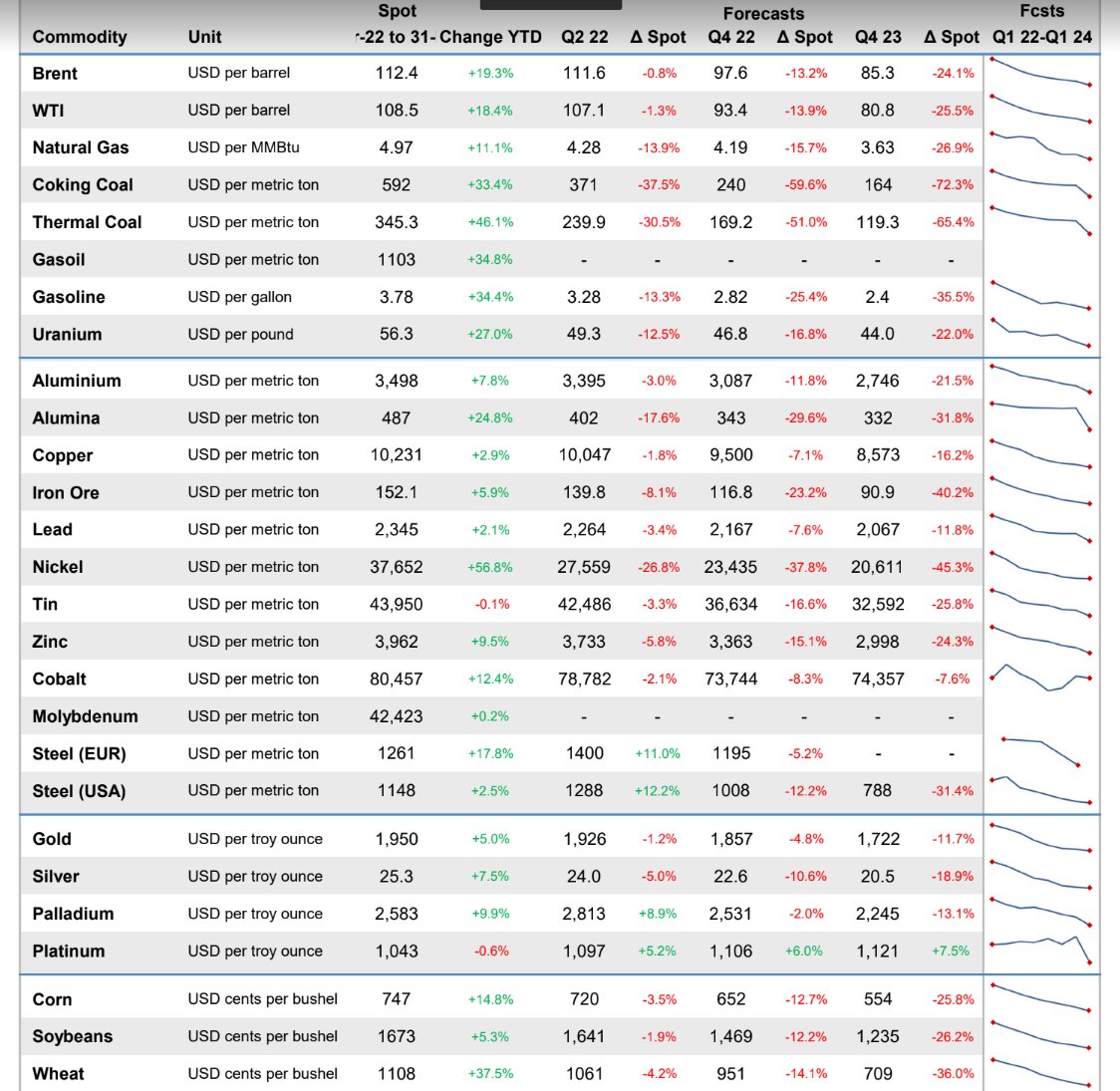 These predictions were made on the basis of an anticipated reduction in demand due to rising prices, without taking into account a reduction in supply due to supply shortages.

Such predictions would be more likely to occur in the "old world", in a globalized system where supply is maintained and trade is well "oiled". How can we anticipate the evolution of inflation from old models when the whole system is breaking down? Funds betting on transitory inflation may not have all the cards in their hands, as the international trading system is changing.

On the other hand, and this is a surprise, US consumer spending has performed better than expected in recent weeks, thanks in particular to a very dynamic job market, a banking sector still stimulated by easier access to liquidity and credit conditions that remain as favorable as ever. Corporate earnings are better than expected, which is supporting the equity market.

It must be said that the level of liquidity has again exceeded a record in recent months. Central banks' balance sheets are at record levels and the promised monetary tightening has not yet started. 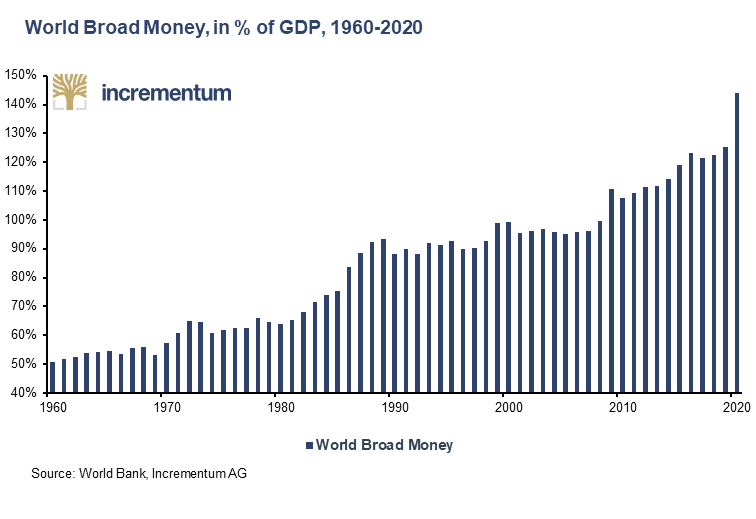 These rather favorable arrangements have maintained strong demand at a time when supply levels were collapsing.

Inflation is not transitory. On the contrary, it is growing and spreading to markets that had previously been spared. American natural gas, which had escaped the sharp rise in the price of European gas, is in turn affected by a sharp upward movement as a result of the postponement of European demand for natural gas: 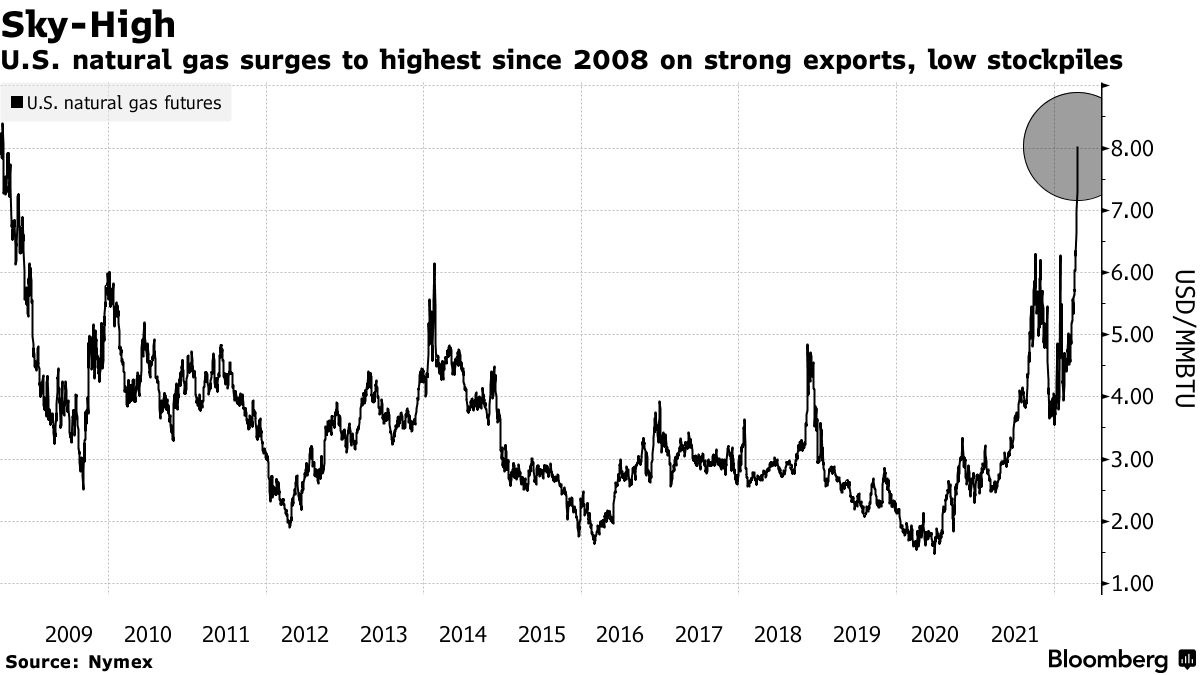 In Europe, the contagion of inflation at the consumer level is likely to be even more severe. The German PPI has just come out at +30.9% year-on-year (vs. 28.2% expected). This figure is the highest since... 1949! The DEPPI index, which measures the index of prices paid by producers in Germany, has never seen such an upward acceleration since the post-war period. 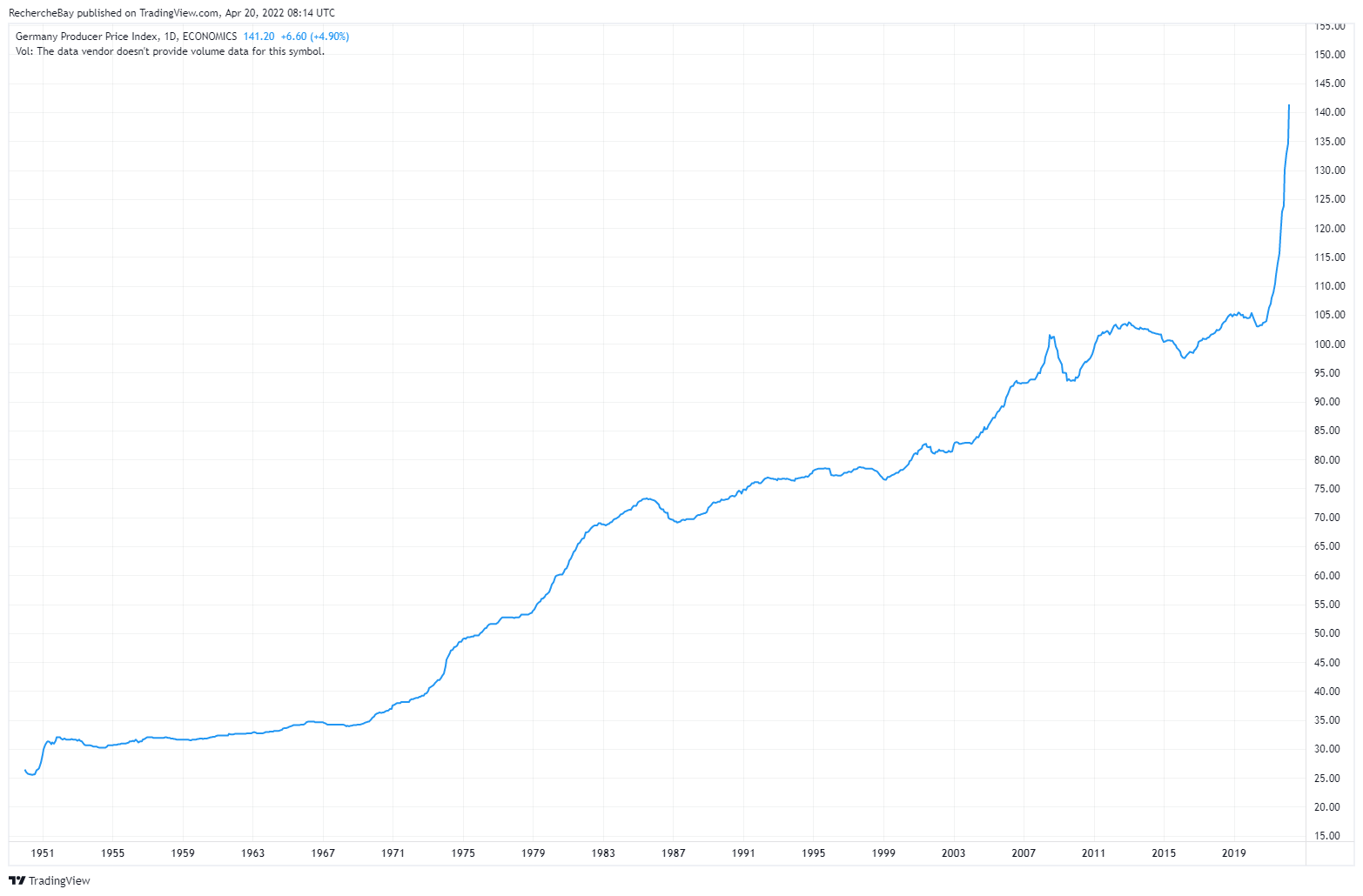 The consequences for the CPI index in Europe are also likely to be unprecedented since the post-war period.

Bets on "transitory" inflation have therefore proved to be totally incorrect, and several funds are now facing substantial losses on investments that anticipated a rapid decline in inflation.

The continued rise of certain commodities now creates a significant risk of short-squeeze for institutions that will have to take their losses...

Normura has already recorded $30 million in losses on unsuccessful inflation-related bets in the UK. The president of the Fed's Dallas office warned that the risk of margin calls in the commodities market now poses a macroeconomic risk. In other words, the losses accumulated by financial institutions that bet on transitory inflation could affect their financial health and thus cause significant damage.

The second negative consequence of these poor inflation forecasts is that the market is now anticipating rapid action by the Fed and the dramatic rise in rates is beginning to cause significant losses for bond funds.

The overall value of the bond market has deepened its losses this week, down $400 billion in just five sessions. That's nearly $6.5 trillion in cumulative losses since the market's peak. 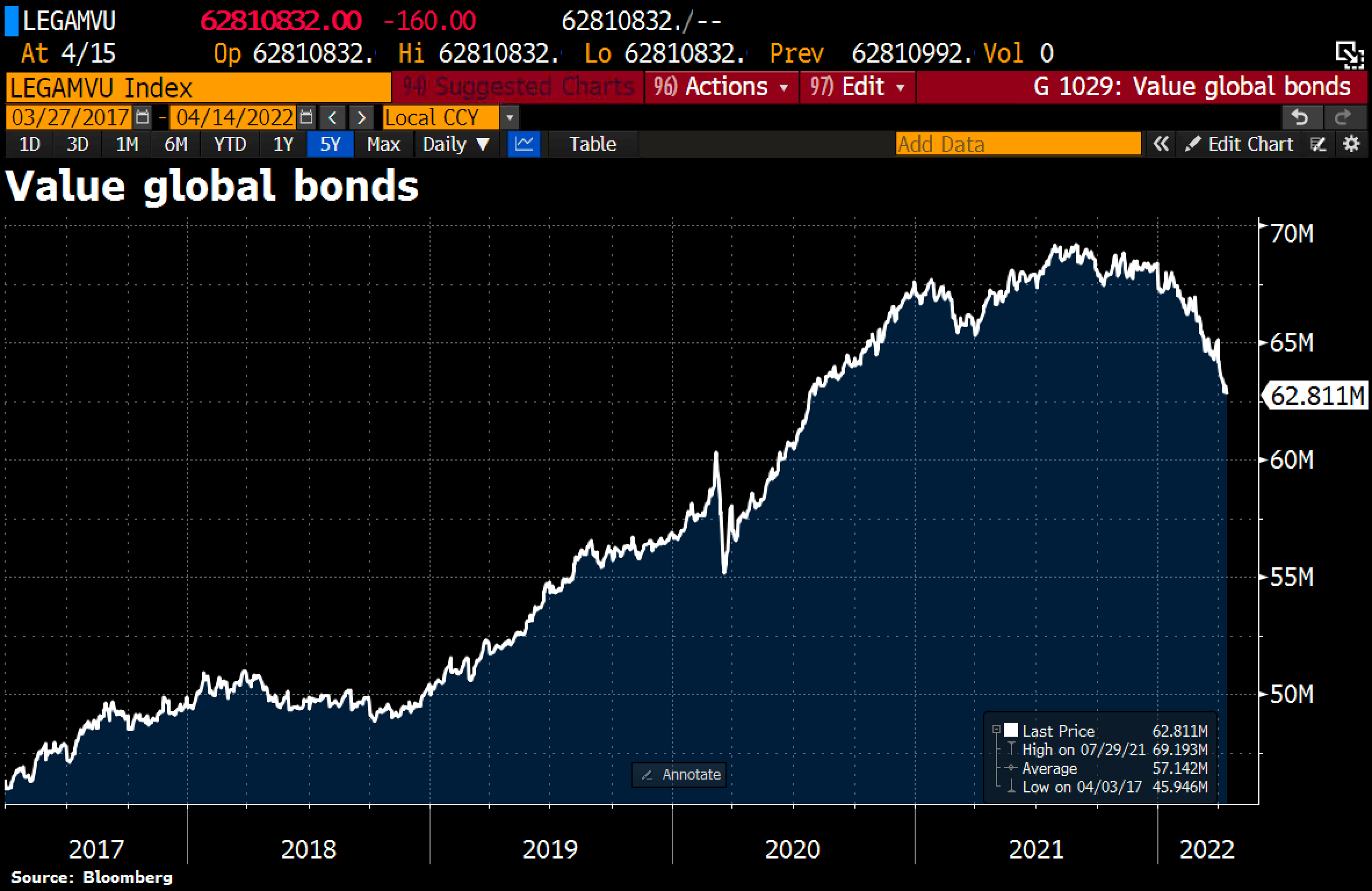 This decline in bond-related products is historic. It corresponds to an acceleration of the rapid rise in interest rates around the world and also threatens the health of the balance sheets of the central banks that hold a significant portion of these securities, acquired during the quantitative easing phases. This is a key point to watch for the gold market that interests us. The threat of solvency of central banks in the face of a rapid decline in the securities that make up their balance sheets is a very bullish factor for gold, because the monetary revaluation of gold reserves serves precisely to guarantee this solvency.

So far, only the Bank of Japan has intervened to curb the rise in interest rates. Last month, the BoJ decided to buy Japanese bonds. What it did not anticipate was that the yen would be the collateral victim of this uncoordinated action. The fall in the yen is historic and this move is helping to strengthen the DXY index back above 100. Gold is also benefiting from the fall of the Japanese currency: the rise of gold in yen terms is simply parabolic in recent weeks: 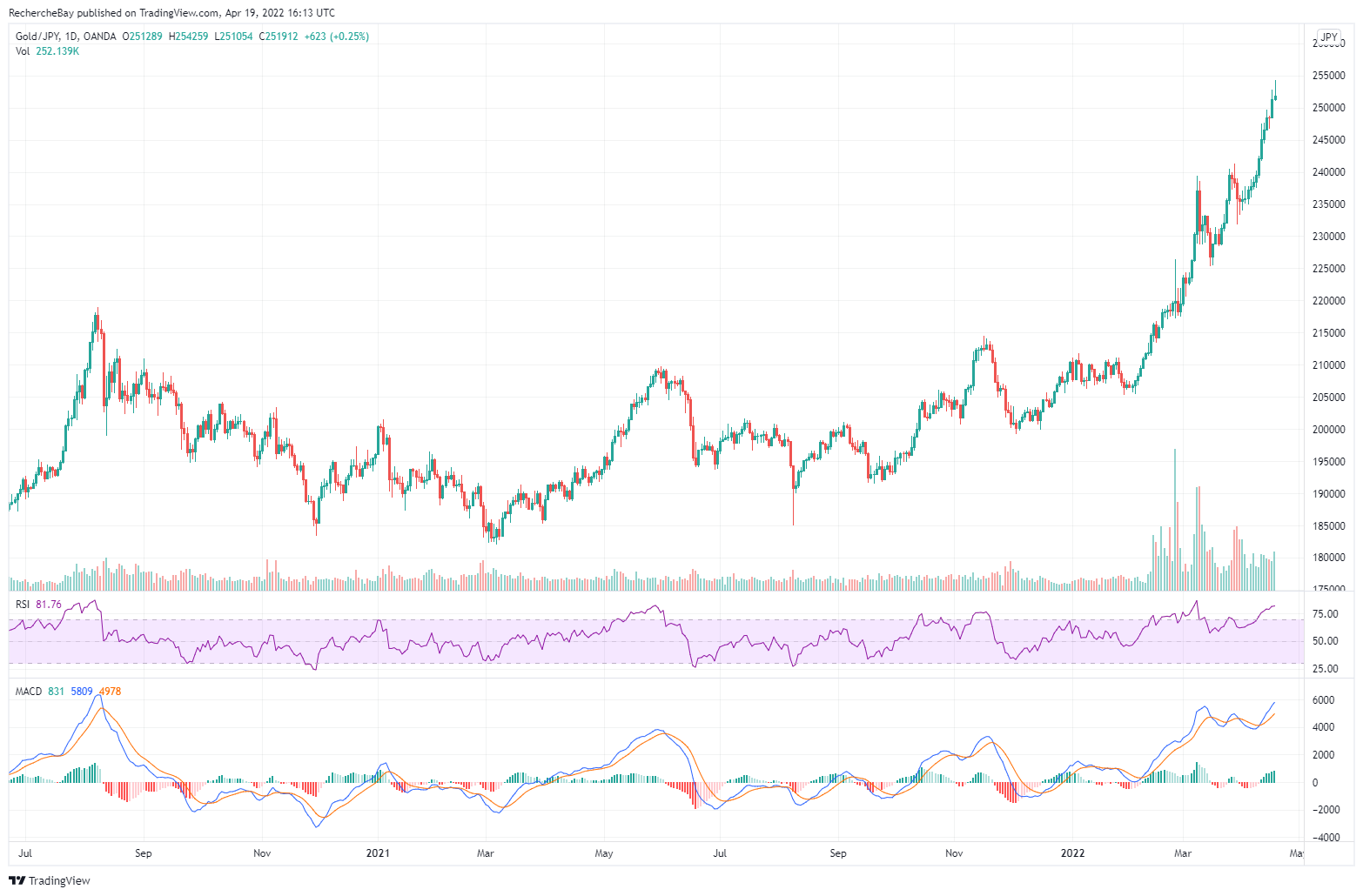 And since the Japanese are the largest buyers of US debt (ahead of the Chinese), the decline in the yen is accelerating as US rates rise.

For now, Japanese monetary policy is protecting the Japanese bond market, but the current collapse of the yen is a new challenge that the BoJ will have to face in the very short term.

However, the rate hike is accelerating in the US. It is now faster than the pace of inflation. Real 10-year rates have gained more than 1% in a few sessions. Gold should have corrected much more in the face of this sharp rise in real rates.

At the start of this week, gold is correcting, but the pullback is very measured when you look at the pace of the rise in the U.S. 10-year. At just under 3%, the 10-year yield index is suddenly breaking through its 20+ year bearish resistance: 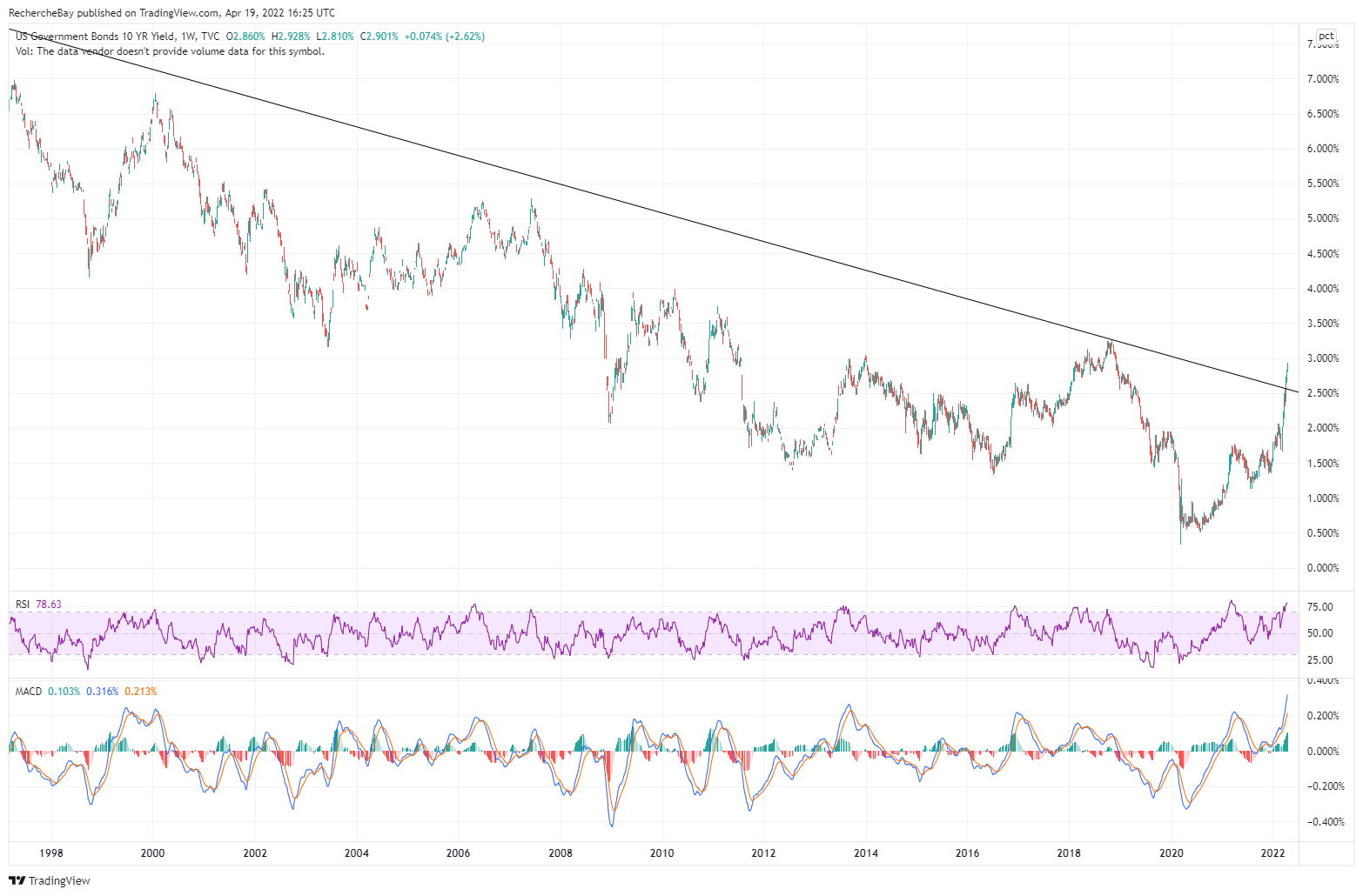 On a smaller time scale, the increase is even more dramatic. Rates have doubled since the beginning of March: 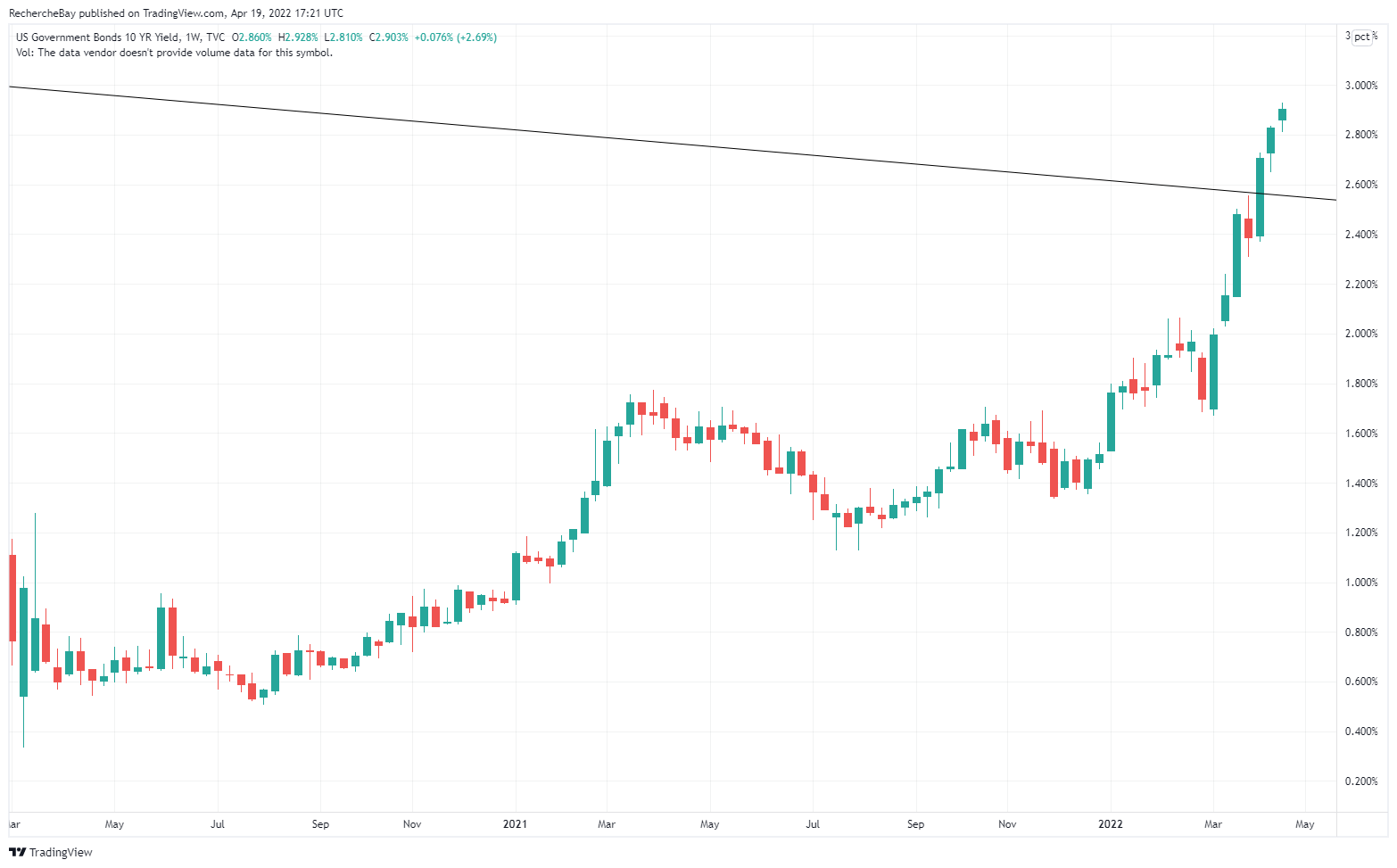 Gold is not correcting significantly as Fed rates lag this real rate hike by a wide margin. The range for the real Fed funds rate, which determines overnight interbank rates, is still at levels near -8%... 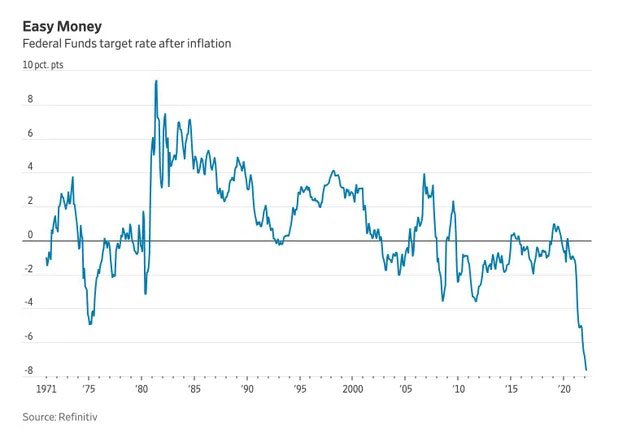 The fact that gold is not correcting under these conditions is evidence of the significant level of demand for the precious metal. Under normal market conditions, with lower inflationary risks and a higher level of monetary policy confidence, gold would likely have corrected much more significantly. Gold retains a premium due to market uncertainty regarding future monetary policies.

In this waiting period, gold price volatility is picking up as we approach the expiration of futures contracts and the U.S. Federal Reserve's decision on a likely rate hike of half a point or more.

As readers of my articles are beginning to know, the two weeks leading up to such events often result in massive selling of futures contracts as they roll over, completely unrelated to the level of supply and demand for physical gold. In the past, these severe corrections have presented good buying opportunities.