Inflation is continuing its spread into every sector of the economy. This week, it is coal that is reaching new highs: 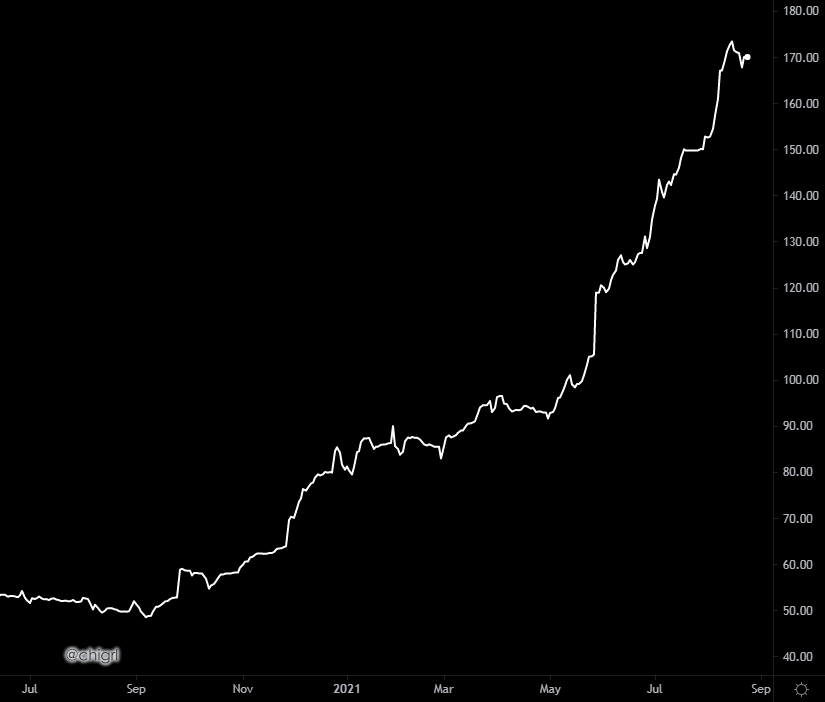 Hot-rolled coil steel (whose use for industrial purposes is so important) is affected as well: 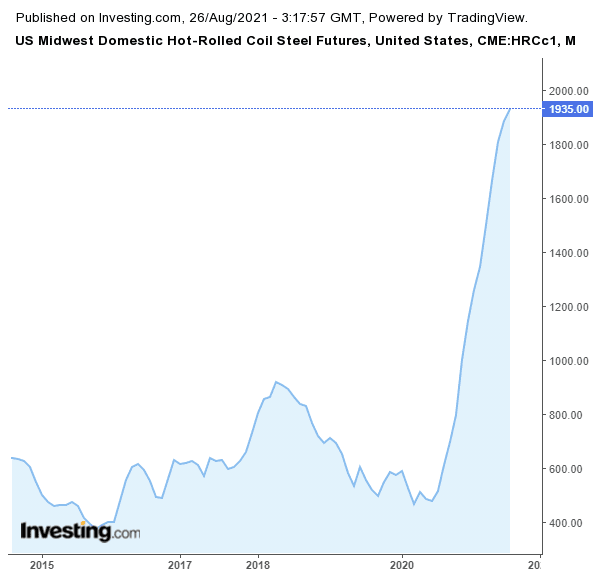 The rise since the start of the summer has been spectacular: 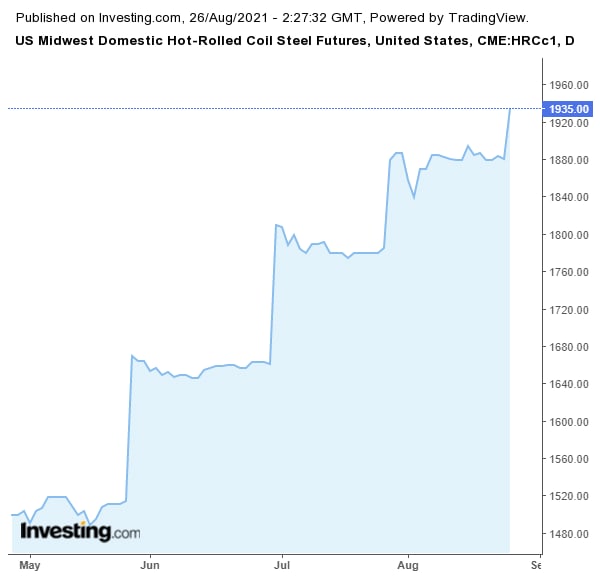 Industrial firms will have no option but to pass on this rise in prices to the consumer. We must expect the prices of manufactured goods to rise at a blistering pace between now and the end of the year.

This inflation has already spread to wages in spectacular fashion... 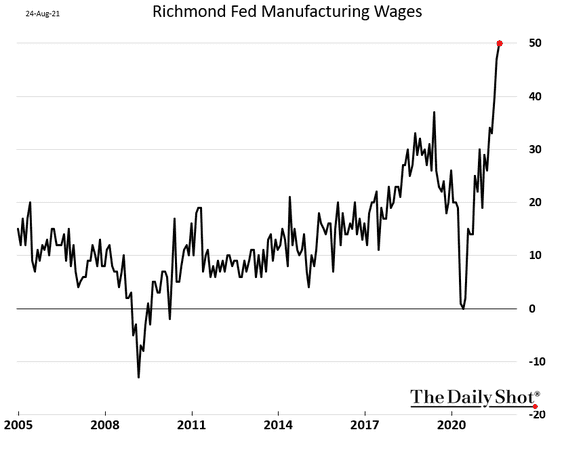 ...and to the prices of manufactured goods (which are rising at a pace not seen for 40 years): 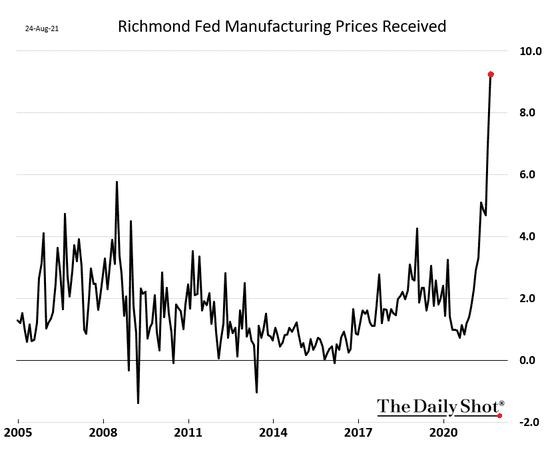 This rise in prices is connected to the expansion of the central bank’s money supply, which is continuing to grow at a rate of 13% per annum:

The Fed is currently printing $100 billion a week, or $6 million a second. A speed of printing like this has not been seen for 40 years.

Too much liquidity created, chasing too few assets in circulation: it is the simple and, ultimately, fairly classic recipe for inflation that we know so well.

If the dollar was still backed by gold, the Fed would need to be selling more than 120 kilos of gold a second to finance its headlong rush forwards. It is at times like this that one realizes just how vital it was for it to end the greenback's convertibility into gold in 1971. A paper money linked to gold would not allow the Fed to make use of these ‘tools’ today...

These same tools are in the process of propelling the majority of assets to stratospheric levels.

U.S. households have never been as exposed as they are now to this stock market bubble (the last peak came just before the crash).

The level of short positions, moreover, has reached an all-time low: 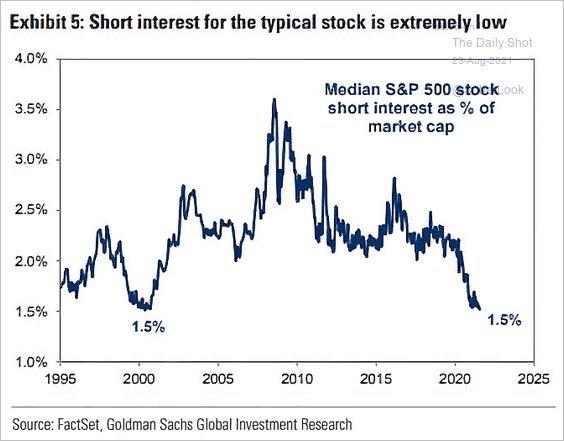 This historic bubble is leading to crazy valuations, particularly in the technology sector.

Microsoft, whose stock I have followed closely ever since the company first floated on the Stock Exchange, currently has a PEG ratio (price/earnings-to-growth) that is above 2... a forward P/E ratio of more than 30 and a Price/Sales ratio of 13. Even for a company as exceptional as Microsoft, these results are quite simply unsustainable. No business - not even one as incredible as Microsoft - can keep promises like these. 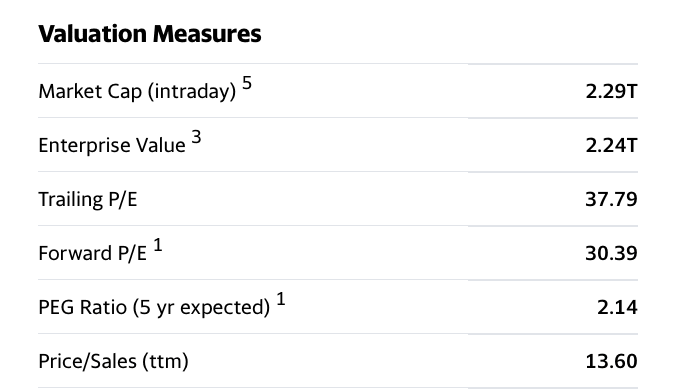 I always love to compare these figures with the mining stocks that get completely forgotten by the market... Barrick Gold has a P/E of 13.6, Kirkland Lake 9.8, Kinross 5.6...

What’s more, these valuations on the stock market indices are starting to elicit a reaction on the part of numerous institutions.

Citadel’s advisers sold over $400 billion of equity according to the firm’s latest 13F-HR statement - i.e. 95% of all their assets.

The institutions are selling, the households are buying; it’s always the same old story, in the end.

Recommendations to buy are continuing to rain down, to encourage this distribution of equity at the peak of the bubble even more. Amazon is currently covered by 55 analysts who are all recommending to buy it, without a single exception. This is absolute madness.

In this irrational environment, it is entirely natural to see more and more investors seeking to protect their savings by means of investments such as physical gold, which is regaining a certain appeal in this climate of a headlong rush on the part of the central banks.

This can be seen in India’s gold imports, which reached 72 tonnes in August. That is more than double the figure for July.

Demand for gold has also been very considerable in recent months in Germany, reaching a ten-year high: 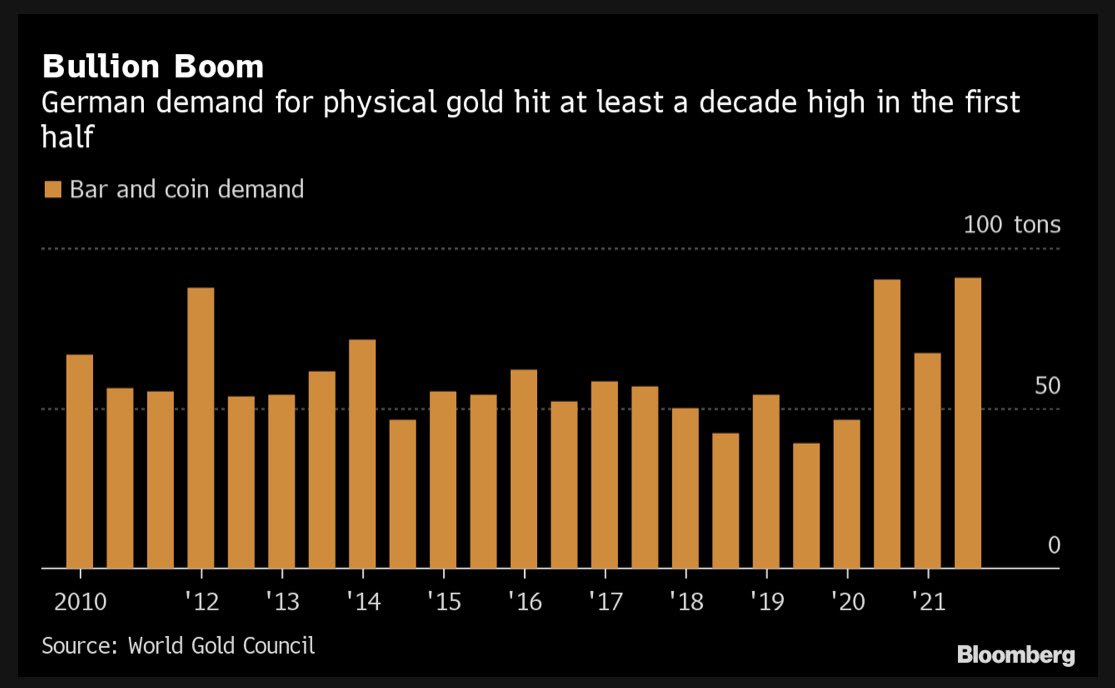 Sales of gold coins in the United States are about to pass a million units for the first time in 10 years: 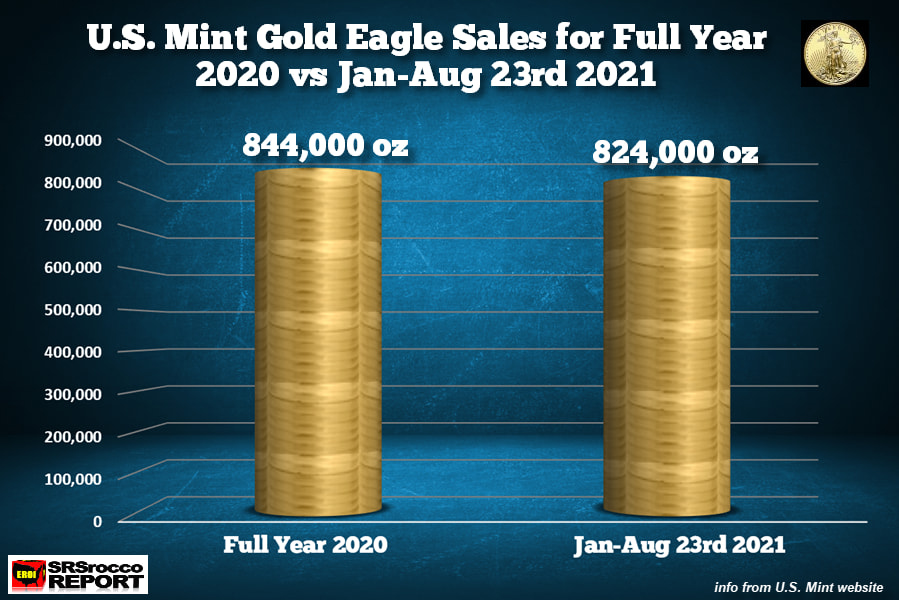 On the charts, the gold price has not confirmed the breakdown initiated at the start of August and is now situated above all of the moving average, without being oversold. After the ‘false breakout’ of the spring, we now have a ‘false breakdown’ this summer!

There are few volumes on the mining stocks, which are still at record low levels, whatever indicators one uses. Most observers are likely expecting a reaction on the part of these stocks the next time there is a correction to the markets. It is in this context of soft expectations that, in the past, most of the troughs in this market have occurred.