This week, Goldman Sachs drastically revised its forecasts for U.S. growth, not only for the third quarter, but also for later quarters. 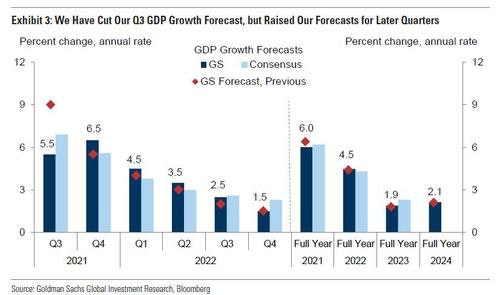 Meanwhile, the bank, in turn, is expecting an inflationary shock and confirming what we were saying here in July: we have entered an era of stagflation where everything we need is going up and the things we’re producing are going down.

The U.S. bank is even anticipating a continuation of the rise in prices in the services sector in 2022, with a housing sector that is becoming increasingly inaccessible. 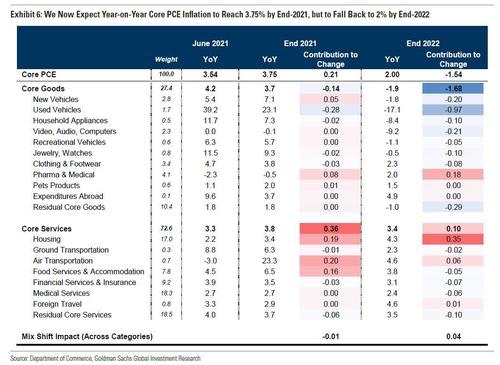 The average price of a house in the United States now stands at almost $400 000, an all-time high. Just 56% of the homes on the market are affordable for a family earning $80 000 a year. That’s down from 63% last quarter. Never before has real estate been as inaccessible as this to America’s middle class. This movement is being amplified with the arrival on the market of institutions in the role of buyers, who are attempting to place their reserves of cash on tangible instruments so as to protect against inflation and the expected fall in the yields from their assets.

An unhappy consequence of this movement is that these institutions, which benefited from a stimulus plan on the part of the central banks during the last crises of liquidity in 2008 and 2020, are quite simply in the process of excluding first-time buyers from the market, by forcing them to move toward a rental market which is itself heading for a double-digit rise in prices.

One has to anticipate that the Biden administration will put a new rent control system in place for the least well-off households, to counteract this rise in prices. There will likely also be a definitive social program that will be hard to question, and that will weigh even more heavily on the U.S. fiscal deficit.

The other government measure that risks becoming perpetual is the student loan moratorium, which is enabling the repayment deadlines to be continuously pushed back. There again, it’s hard not to get a sense that another rise in the U.S. deficit is around the corner.

The other social measure that will doubtless be implemented in due course concerns those famous food stamps, whose cost, for the state, has shot up 27% since the sanitary crisis. It has to be said that the inflation in this field is starting to have spectacular effects, since the price of food has gone up by 31% since last year!

The inflation is thus prompting the U.S. government to put support measures in place to counteract the ill effects of this inflation in real life. These measures are increasing the deficit, forcing the Fed to monetize even more debt, and these actions are keeping the devaluation of the currency going...thereby further accentuating the inflation.

It is a vicious cycle that, unfortunately, can have no positive outcome.

Any stimulus is a roundabout way of discounting the value of the work to be done tomorrow. When adopting this type of measure, no-one ever measures the fall in the value of this future work. We pay today, but we take away value from the work we are going to provide later. Right now, we are measuring, in accelerated fashion, a cycle that we entered 50 years ago.

Monetary creation and governments’ capacity to compensate for the devaluing of money through stimulus plans has had consequences on the value of wages, which have not benefited from the gains in productivity achieved since 1971. 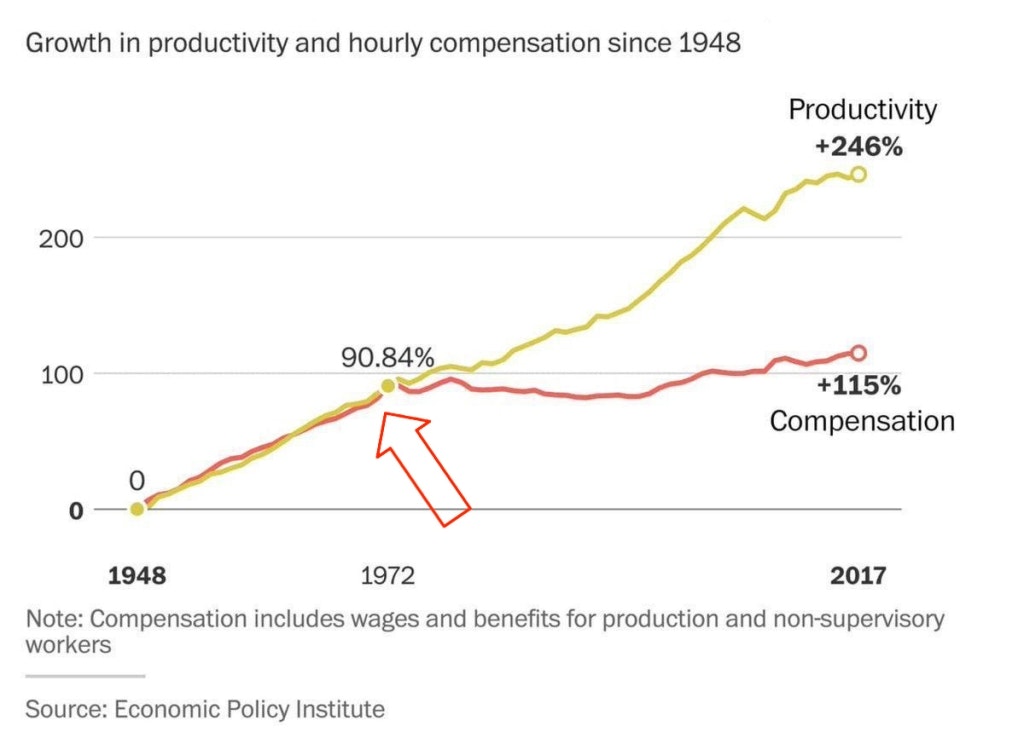 When a central bank encourages a government to spend money that it doesn’t have, the mathematical consequence is that the real wages of the middle classes fall, over time. All the assets that did not benefit from exposure to the financial products have clearly felt this sensation of being at a standstill. The gains in productivity have essentially benefited the assets. Consequently, the most affluent classes, who are precisely the ones most exposed to these assets, are the only ones to have benefited from this gain in productivity.

While real wages were stagnating, the financial instruments continued their advance thanks to a sector that was becoming increasingly inventive (a derivatives market growing in volume, new quantitative tools, new trading strategies, etc.). This financial “engineering” blossomed in the face of a market for real assets that accounts for an ever weaker share of transactions. The financial economy acts like a gigantic form of leverage on the real economy. It’s the consequence of the increasingly intense and repeated support from the central banks, which are very naturally defending the industry that installed them and that constitutes, in an exclusive way, their board of directors.

An additional difficulty for the middle classes: the classic form of saving in bond investments is no longer sufficient to counteract the effects of this inflation. This week, James B. Bullard, the chairman of the Federal Reserve of St Louis, said that he was expecting the Fed to let its balance sheet deflate. He added that this deflation will enable the bonds markets to be "fairly priced". In one short sentence, one of the most influential members of the Fed admits to the integral controlling of the price of bonds by the monetary authorities.

Let us take stock of the results of the central banks’ interventions: real wages kept down, and savings sacrificed...in favor of financial assets that are completely exploding, and lining the pockets of a class of privileged initiates, the famous 1%, the richest, who have never been as rich as they are now.

The purchasing power of the middle classes has managed to hold its own in this cycle, due to globalization and technological innovation, which have had strongly deflationary effects. Our real wages have fallen, but up to now the things we’ve been buying have been becoming less and less expensive because we had exported our centers of production to Asia, the commodities for making what we consume were at an absurdly cheap price, and the transportation costs were negligible too.

Today, the prices of commodities are exploding, and the price of the globalization of the exchanges is being revised upwards.

Having had a spectacular effect on the prices of commodities, the inflation is now spreading to service activities. The Baltic Dry Index, which measures the cost of shipping goods, is soaring this week to its highest level in 11 years. 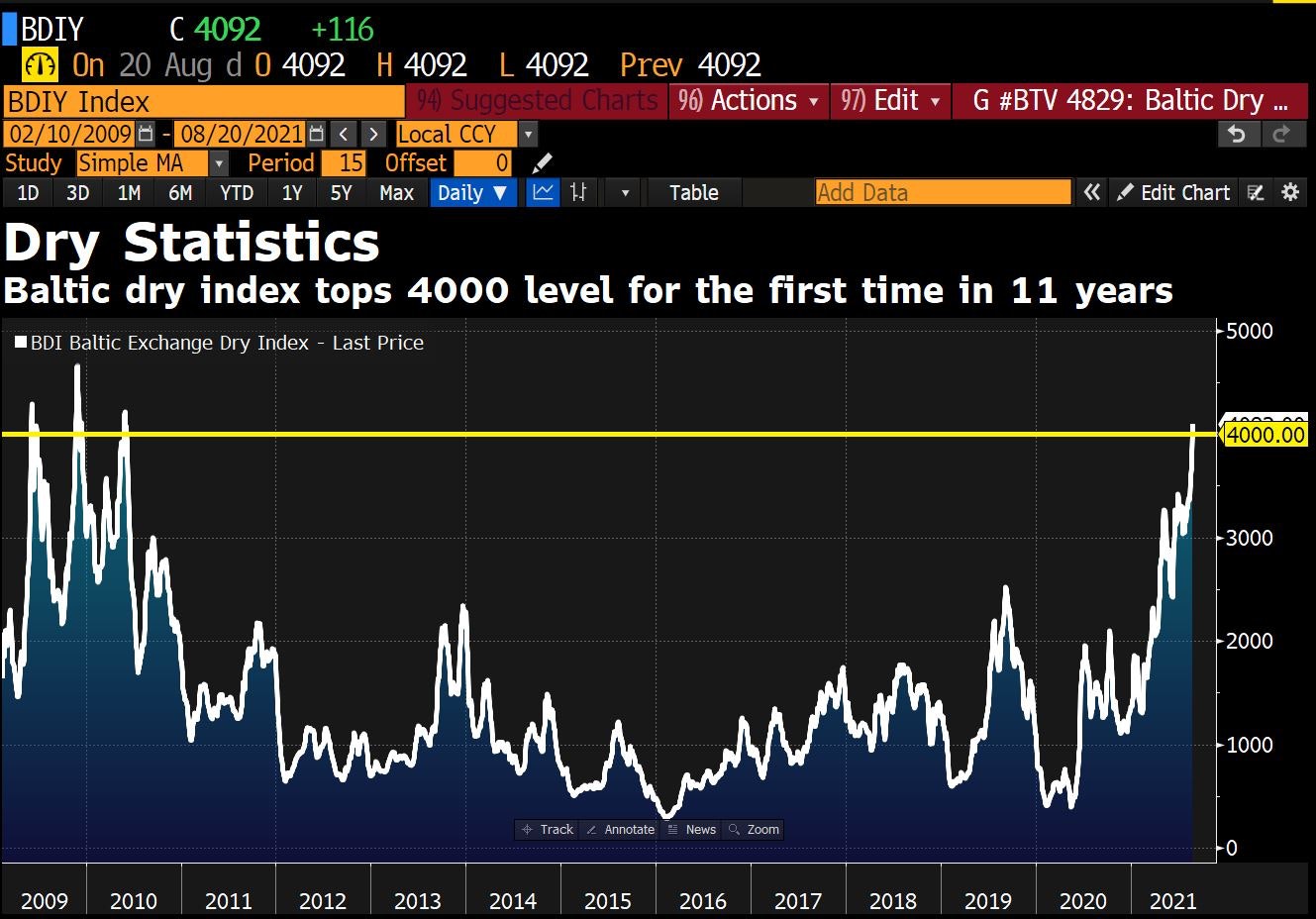 The inflation on commodities and the sanitary crisis have created enormous problems in the global production chain. The risk is that we may now see a generalized rise in prices during the end of year period. Christmas presents may well cost a lot more than usual this year.

Some will put forward the argument that, if the price of a good becomes too expensive due to this rise in prices, the demand will collapse and the classic law of supply and demand will make the price fall again, then the product in question will once again become affordable.

The current situation is throwing this simple law of supply and demand into utter confusion. Globalization, which had hitherto enabled the purchasing power to be maintained, is now acting as an accelerator for the inflation.

The consumers in this economy, who are bearing the full brunt of this new cost of globalization, are not productive enough to be able to take the liberty of producing these products themselves. These products are therefore at risk, quite simply, of no longer existing in this economy. This is the ultimate form of inflation.

The disruption to the production chains tells us there will be disruption to supplies around the corner, and that is the first sign of a new phase in this inflationary cycle.

The inflation is spreading. This time, the Fed has a real problem on its hands, with this phenomenon that has taken people by surprise with its intensity. The problem is arising at the very moment when an awareness of the nefarious effects of the monetary policies is dawning on people.

Is it this new risk associated with inflation that has prompted the unusual demand for physical gold in recent weeks? Gold is being seen here not as a refuge from inflation, but rather as a refuge from an out-of-control event linked to the new risks engendered by this inflation.

Three important events have taken place on the gold market:

1. The U.S. firm Palentir, which has a deep-seated presence in the banking and governmental sector, has just bought and taken possession of $51 million of gold bars to hedge against a “Black Swan”-style event.

2. The Egyptian billionaire Naguib Sawiris declared that he is investing up to 30% of his portfolio in gold.

3. The gold purchases by the central banks have literally taken off in the last six months.

Globally, demand for gold has risen by 69% in the last six months, and has now reached 547 tons. In China, demand was up 97% in the first quarter by comparison with the previous year, and rose by 5% compared to the pre-Covid figures from 2019. Moreover, China has re-evaluated its gold reserves, which now far exceed its former estimates.

On the silver paper market, things are improving.

Do you remember the raid that took place on 17 July last year? The equivalent of six months’ worth of global silver production was sold in a matter of minutes on the futures market... 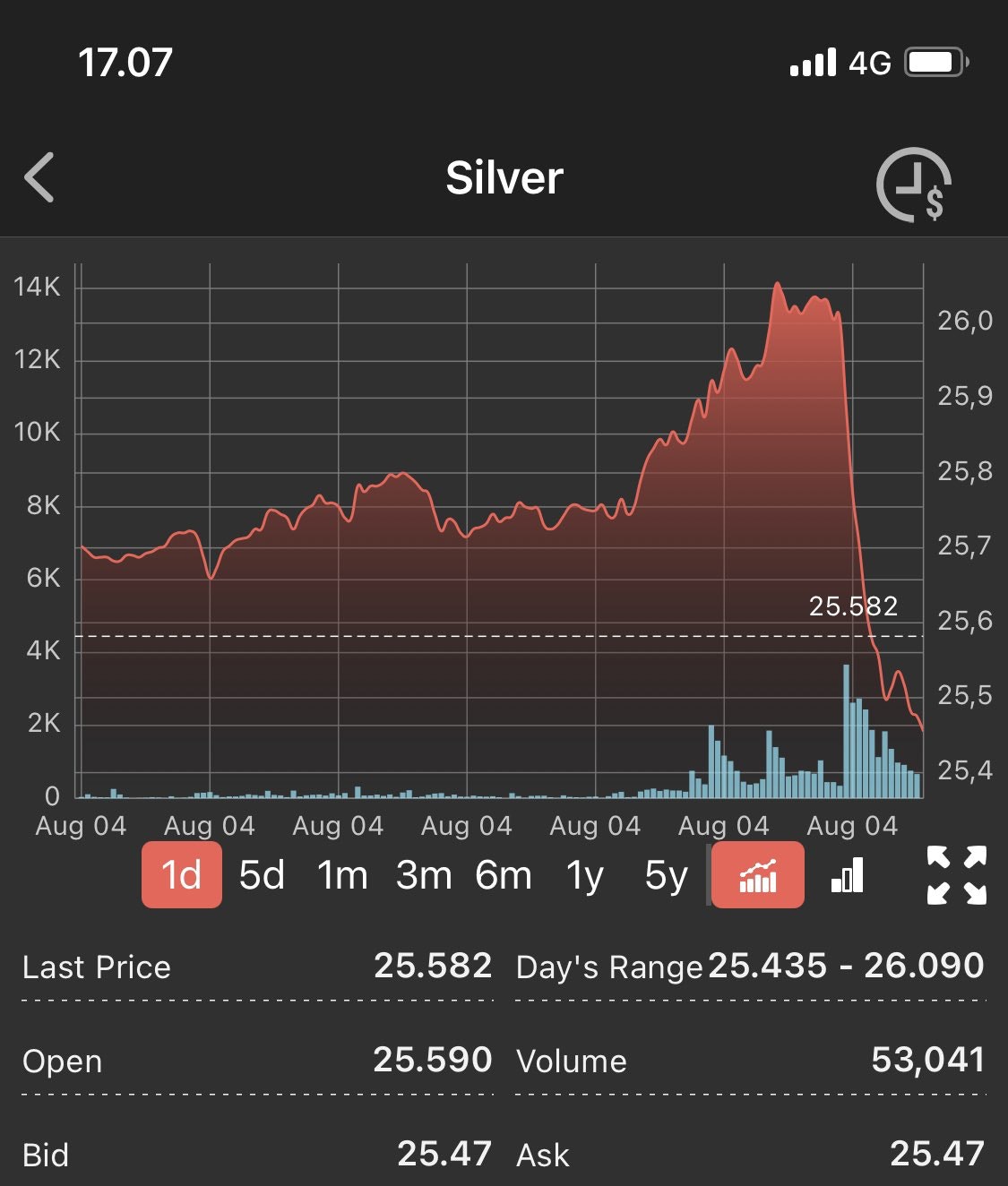 This raid visibly enabled several “short” traders to cover their backs. Their level of exposure in net short positions has once again returned to a low that corresponds to the level at which the silver spot price resumed its rise last year. 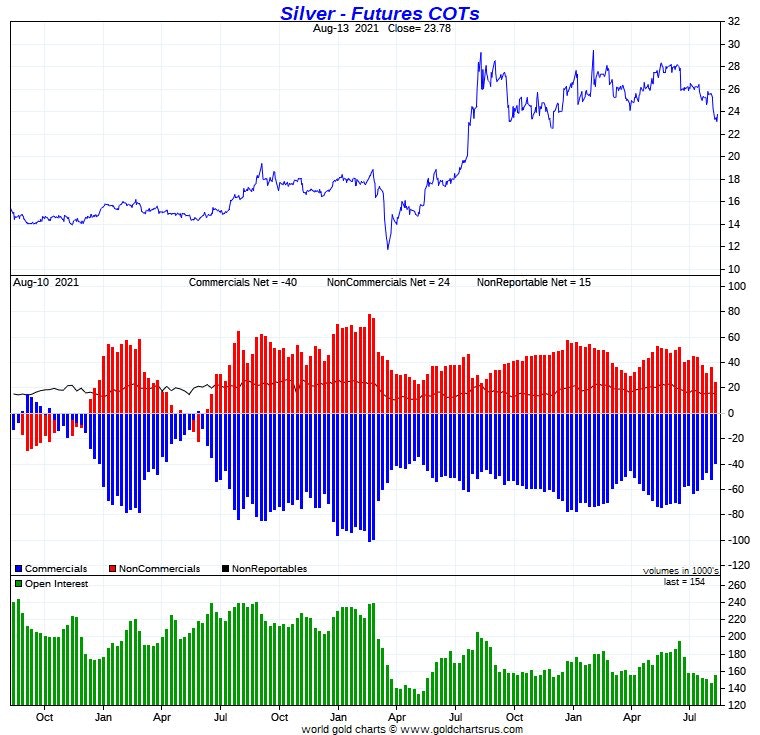 The tension on physical silver has prevented a strong correction of the silver price in this phase in which positions are being closed. These positions have likely been closed at a loss, and the ones that still need to be closed will be closed at an even bigger loss.

The r/WallStreetSilver community now has almost 130 000 members and is a powerful relay tool for the launch of silver purchasing campaigns. These campaigns are widely disseminated whenever the metal suffers raids on the futures market. The viral effect of these runs on silver, amplified as they are by social media, has turned the silver market on its head and is currently giving “retail” a prominent place in the global demand for investment in the precious metal. 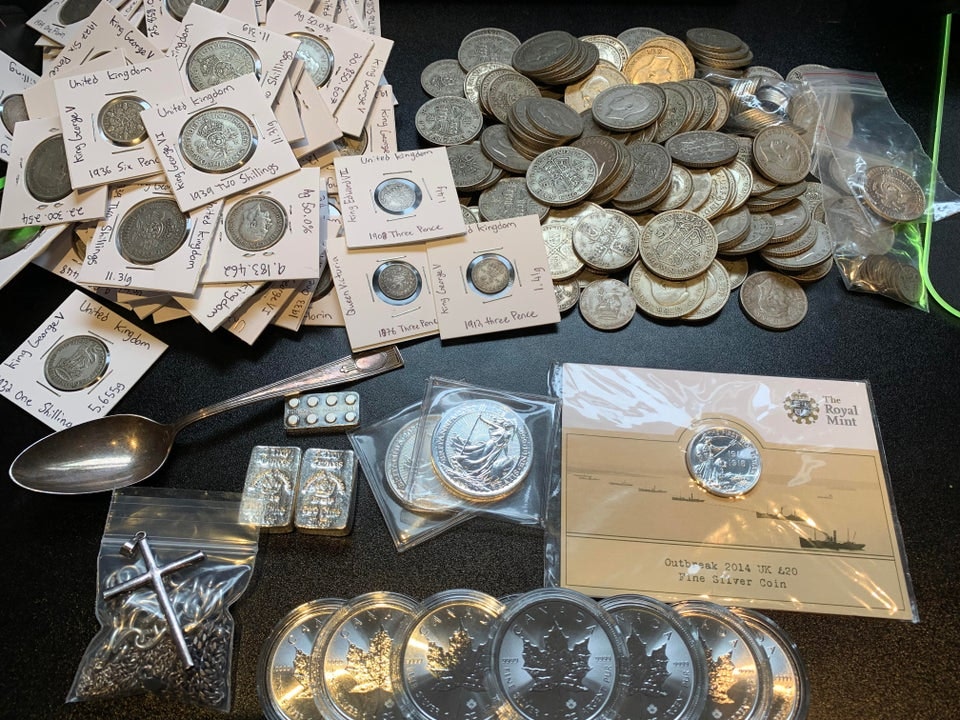