A wind of change is blowing for gold.

Two weeks ago, precious metals prices were falling whereas yields on U.S Treasury bonds were rising. This week, sales of bonds continue but gold stopped its fall and started a rebound.

The GOLD/TLT ratio, which measures the level of interest on gold relative to U.S bonds, has broken out for the past few days. 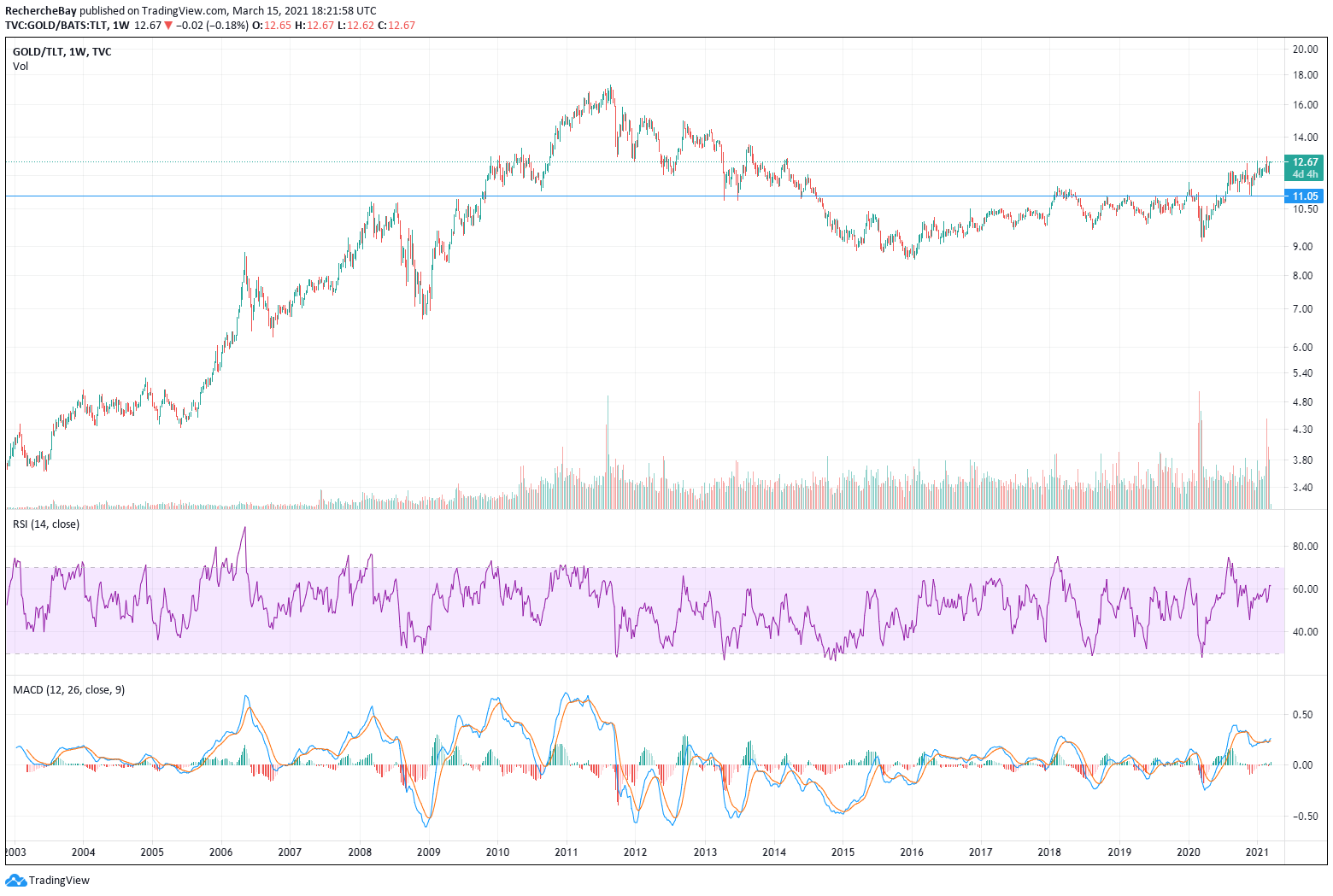 This type of configuration is the most anticipated by long-term investors in gold. As during the 1970’s, we find ourselves in a “gold purchase - sale of treasuries” configuration”, which is susceptible to drive the price of gold to levels that are much higher than in 2020.

The last futures market statement published on Friday (“Commitments of traders” - COT) is rather spectacular: it indicates a significant hedging of the short positions (bullion banks). But the movement in the category "speculators" is especially impressive: hedge funds, by liquidating almost 30,000 futures contracts, have reduced their long-term net positions on gold by 36%! Their long-term net positions have gone down 90% since their highest in August 2020. This movement lays the foundation for a rising energy that will be quite important for the next few months.

This hedging of banks' short positions is occurring at the same time at which sentiment in gold is at his lowest, sentiment which is largely kept by traditional press releases that are often found in these market turning points.

The latest article in Barrons goes in this direction: We might read “Don’t Expect Gold to Bounce Back Anytime Soon” on their site last week.

Blackrock, quoted by Bloomberg last week, also caused a chill in the sector: “Gold is failing as an equity hedge. Gold’s ability to hedge against inflation has been somewhat exaggerated...Absent a strong view on a declining dollar, I would own less gold.”

As a reminder, BlackRock had released the same type of article regarding the petroleum sector a little over a year ago, on the eve of an historic boom in the price of crude oil. Let us hope that for long-term gold futures, this advice will be just as relevant for marking dips in the precious metals sector!

These press articles are always “good” news for a contrarian mind: it’s always useful to observe them carefully at a time when the trends are turning around.

Some banks have hedged their short positions, others have taken advantage of the opportunity to liquidate all their positions on a futures market which finally ceases to be profitable enough for them. The first to withdraw from the market was the Canadian bank, Scotiabank, which this week is closing its historic trading department on derivative products associated with gold after having discounted a loss of $168 million. This withdrawal from Scotia Bank probably heralds other withdrawals from Bullion Banks from the futures market in the next few months.

In the silver sector, the run on the Comex stock is continuing to do just fine. Last Thursday, 4.2 million ounces came out of the stocks, 120 tons in just one day! 12 million ounces (340 tons) came out of stocks in one week, for a total of 25 million ounces (more than 700 tons) have disappeared from Comex’ vaults since the start of the SilverSqueeze. Since July 2020, 300 million ounces (8,500 tons) of physical silver have been delivered via the Comex.

The mines have been more clearly marking this week’s change in trend. It is true that with a mean production cost of $900 per ounce, mining companies have never known such margins in all their history. Even at $1700, this represents a 100% profit per ounce. This gold mine sector is the market sector that offers the greatest operating margin.... and it is also the cheapest sector of the quotation!

The potential for appreciation in the industry is still not being measured by the market. Not even the potential for yields, with certain companies who are already posting dividends close to 4%.

However, the winds seem to be changing there also.

Newmont went up almost 5% this past Monday, this is always a good sign for the sector to have a leader in good shape, that is the signal that investors are generally waiting for to re-enter the sector.

Graphically, restarting of mines can be seen on the GDX/OR graph which measures the performance of the mines against metal. The MACD graphic shows a glimpse of the validity of the breakout of this report: 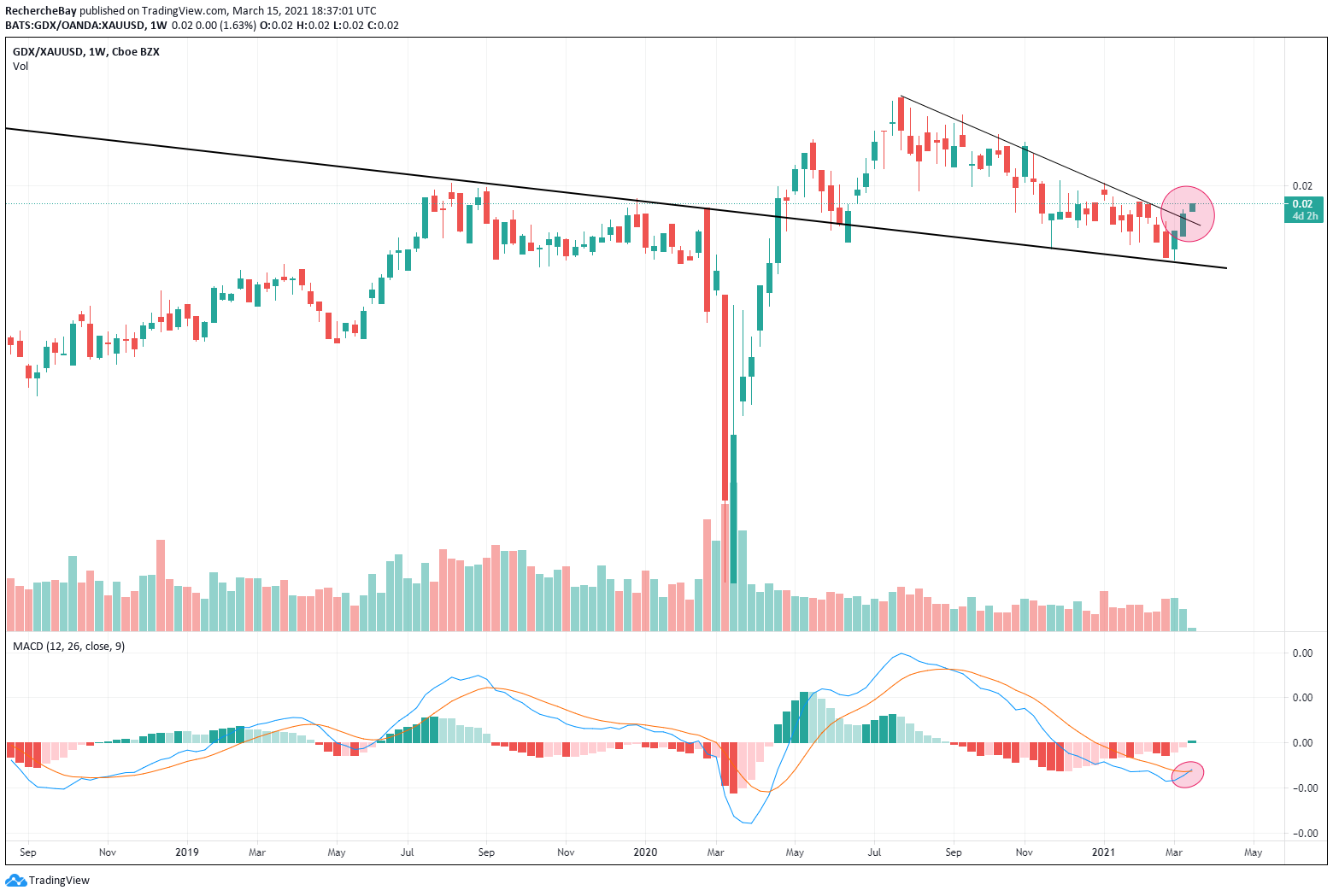 This movement is all the more remarkable in that it is subsequent to a false breakdown in the HUI/GLD ratio, which measures the mines’ performance in the broad HUI index relative to gold: 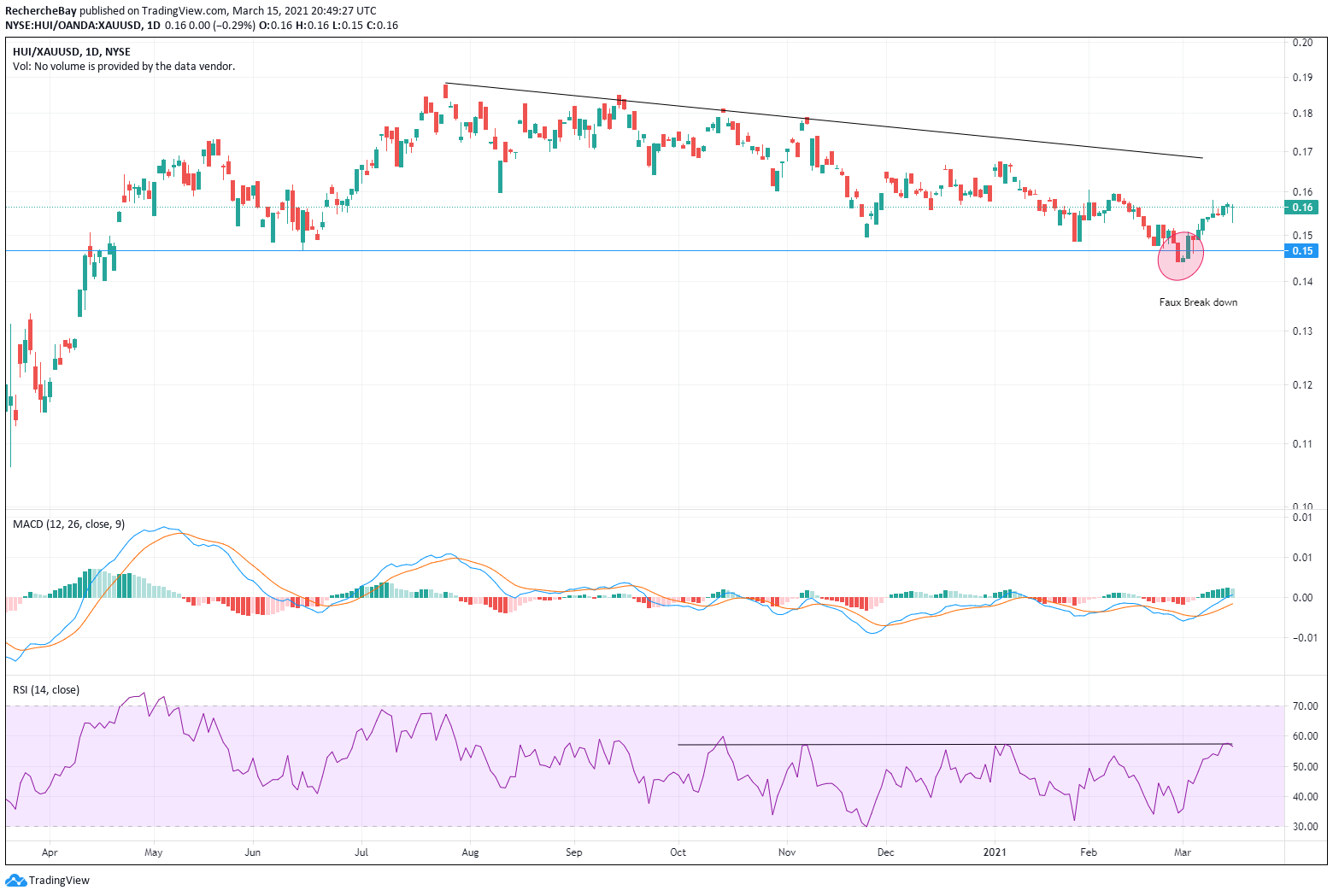 Interest in mines has started up again, right after a sell signal was invalidated.

This sign of return is in any case sufficient for some juniors in our portfolio to pass back to “Popcorn” mode again.

Last week we brought up GT Gold, which was bought back from Newmont.

This week, the projectors were steered towards two (junior) mine exploration companies.

The first, which we have already been talking about for a long time, involves Abraplata.

Abraplata just recently announced the best drilling site ever found by the company in their Argentinian site in Diablillos.

What fabulous “drillings”! At 103 meters, 1 ton removed will bring you 327 grams of silver and 95 grams of gold. At the current prices of metals, this is $425 per one-ton shovelful.... We can easily understand why Eric Sprott has risen to twice the capital of this junior mining company.

The equity took off by +25% with this announcement. The company is going back to its highest heights, its price has already quintupled since our purchase, and this is probably only the start of a fine Argentinian story in the silver sector.

The second company that made some buzz was Battle North, BNAU.TO, which is receiving, from the Australian company Evolution Mining, a buyback offer in cash (!) for $343 million. I had added the company to my portfolio after my meeting with Nick Nikokalakis, CFO of Battle North. The company has a low market capitalization; it is majority-held by corporations. A +46% premium was achieved, which is approximately my gain on the equity. Congratulations to the board for this buyback by a major Australian mining company.... even if I think that it's especially a good deal for Evolution Mining. The Australians have just set their hand on one of the most beautiful properties in the area of Red Lake. In any case, that confirms the interest of producers for the Canadian “flagship” regions. The projects being researched are quite advanced in terms of feasibility. Therefore it is advisable to give priority to selecting this type of issue when doing our research. 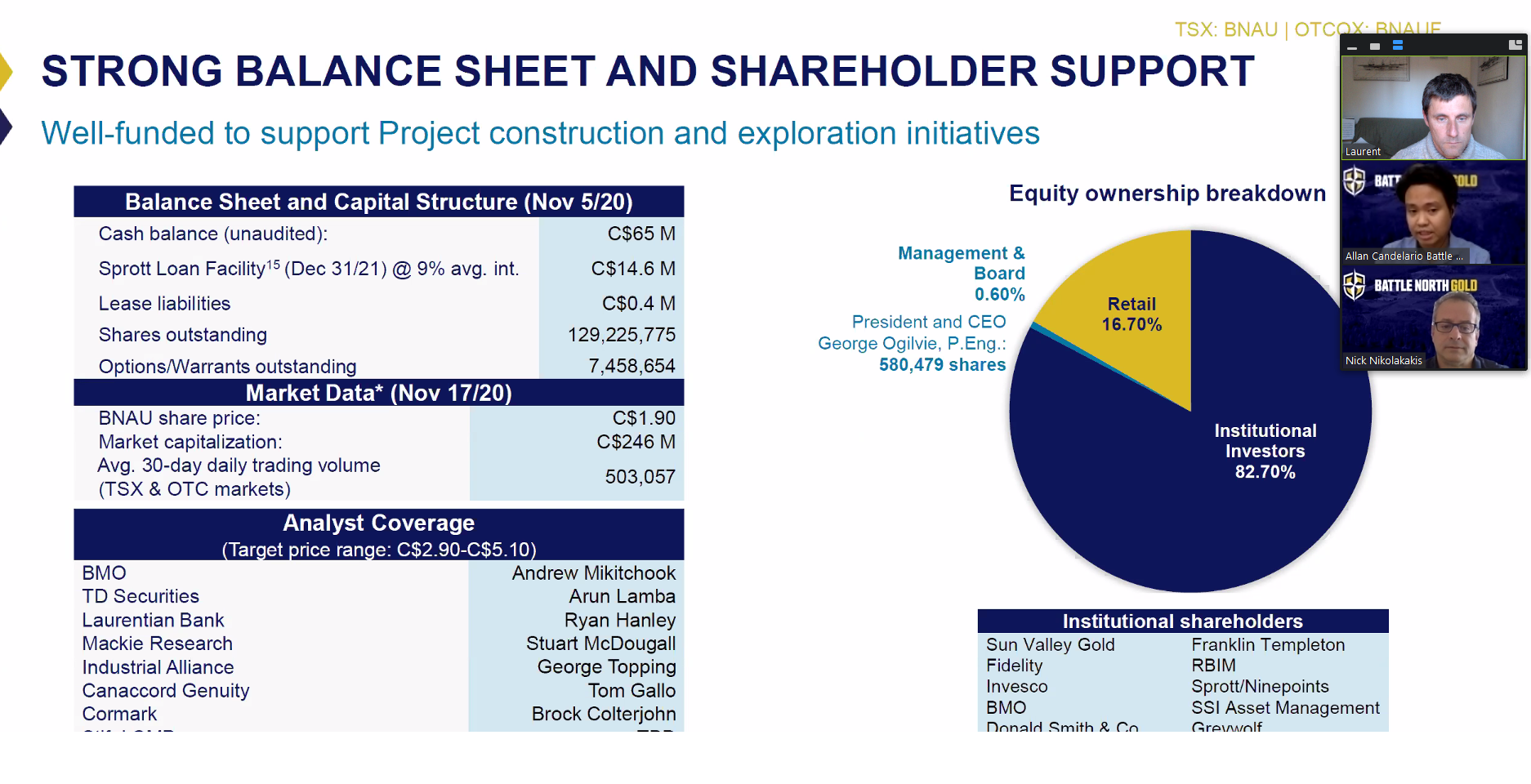