Let us set our reference value to 100 in January 2007 (one year before the big financial crisis of 2008 began in the USA), for the following three variables: the U.S. nominal GDP, the debt issued by the U.S. government in the past and, finally, the U.S. monetary base (the money of the central bank) and see where we are today.


These figures illustrate a reality: the reader must understand that since 2008 at least, we have been living through a monetary experience that is without precedent in modern history. The Eurozone has been following similar monetary and budgetary policies since 2012. In fact, the two foremost global economic powerhouses, the United States and Europe, decided at the same time to allow their central banks to finance the budget deficits of states, on a massive scale, by buying the bonds issued by these same states.

This monetary and budgetary drift occurred in two phases:

An observer arriving from the planet Mars would have expected a strong inflationary surge in these zones, because inflation, as Jacques Rueff used to say, "consists of subsidizing expenditures that give no returns with money that does not exist” and that is what the central banks are doing.

Well, that wasn’t the case at all.

The U.S. GDP deflator (the price index) rose prudently by 1.5% per year throughout this entire period, leaving observers of a monetarist tendency (such as myself) somewhat surprised, and, of course, arousing the enthusiasm of the Keynesians, who are constantly telling us that we can therefore put the money printing machines into overdrive to finance all state spending - even the zaniest aspects of it - without this having the slightest consequence on the hike in prices.

Keynes was right, then, and Milton Friedman was wrong.

But perhaps we’re jumping the gun a little.


All that has come to an end and we definitely appear to have entered a period of lasting inflation, as attested to by the following chart - though, admittedly, it requires a few clarifications. 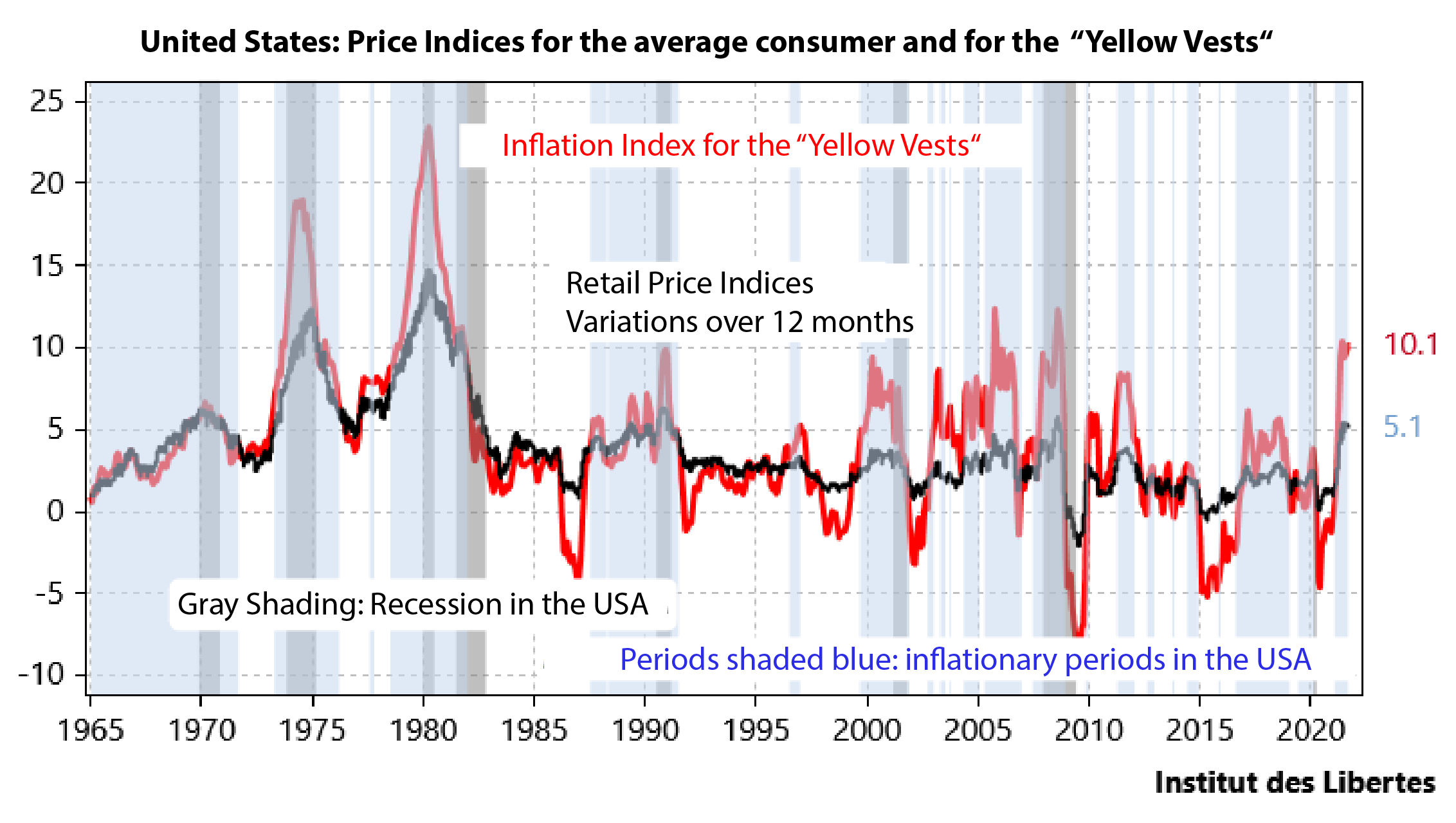 In short, all the indications are that we are hurtling at breakneck speed into a new inflationary period. And, as is often the case, we are doing so with real interest rates (i.e. with inflation deducted) at their lowest since the ’70s, as shown by the second chart I have included in this article. 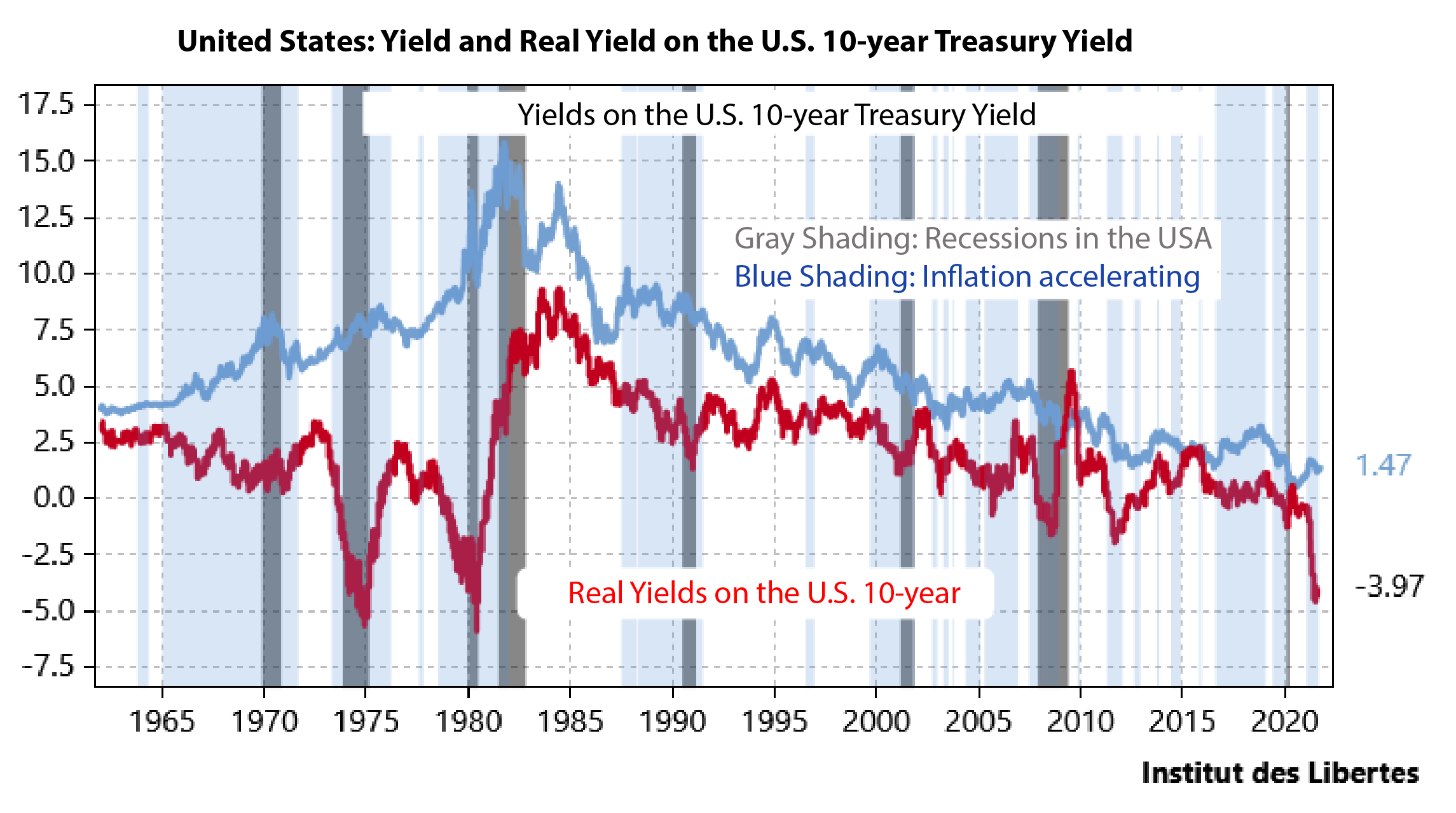 As I keep on explaining, the Keynesians think that in order for an economy to function well, it is necessary to bring about the “euthanasia of the rentier” - in other words, the ruin of savers. With nominal interest rates at 1.35% and inflation at 5.37%, putting real rates at -4.05%, that is precisely what is well on the way to happening. The problem is that if you guarantee to the saver that he is going to lose 4% of his capital per annum, he will stop saving or save elsewhere, and the national savings ratio will collapse. And since, in the long term, savings are always equal to investment, investment will collapse too, as will productivity and therefore economic growth, followed by people’s standards of living and, finally, the Democrats’ chances of being re-elected in a year’s time.

And to top it all off, Mr. Biden and the U.S. central bank are in an impossible situation:

The problem is that the amount of stored up debt to be refinanced has increased so much since 2007 that any rise in the rates would immediately lead to a genuine catastrophe - first a financial one, then an economic one - in the USA.

With the violent rise in inflation, this solution no longer exists, and a choice will have to be made between accepting a collapse of the dollar and therefore a massive drop in Americans’ standards of living, with the U.S. public no longer able to pay for their imported goods, or, in order to save the dollar, increasing the rates and making the price of U.S. assets collapse, so that foreigners can buy them cheaply.

Seeing this dilemma, there is one man who must be very glad he didn’t get elected in the last presidential election, and that’s Mr. Trump, whose supporters might crush not only the Democrats but also his eternal enemies within the Republican Party, the famous ‘RINOs’ or ‘Republicans in name only’. He may well hit the jackpot come next November...

The next 12 months look set to be very tough indeed for Mr. Biden.

All this appears to be very somber. To prevent readers from feeling completely dejected, there is a third solution that should also be mentioned.

The USA has the largest official holdings of gold in the world. They could decide to devalue the dollar massively in relation to gold (gold would have to be at $5000 an ounce, at least, in order for the ratio between the government’s stock of debts and the stock of gold to be the same as it was in 1950...I would ask for $10,000 to be on the safe side), so that they could convert the US debt into debt that can be repaid in gold, index the US money supply against the US gold stock, shut down the Fed and all the other central banks as well, and thereby go back to the gold standard. That would keep inflation very low for a sustained period, or even lead to deflation, and make it easier for the past debt to be serviced, because the short-term rates would be close to zero.

It is likely that this is what the USA will end up doing, because, as Churchill put it, “You can always count on Americans to do the right thing — after they've tried everything else”. We are rapidly heading for the end of the fiduciary currencies, and it’s not that they are a bad idea in theory, it’s quite simply because our political regimes have shown themselves to be incapable of managing them. At any rate, that is what China has been preparing for since at least 2007. 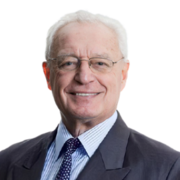