After copper last week, it has been the turn of magnesium to take off in recent days.

The price of magnesium has more than tripled since the start of the year. 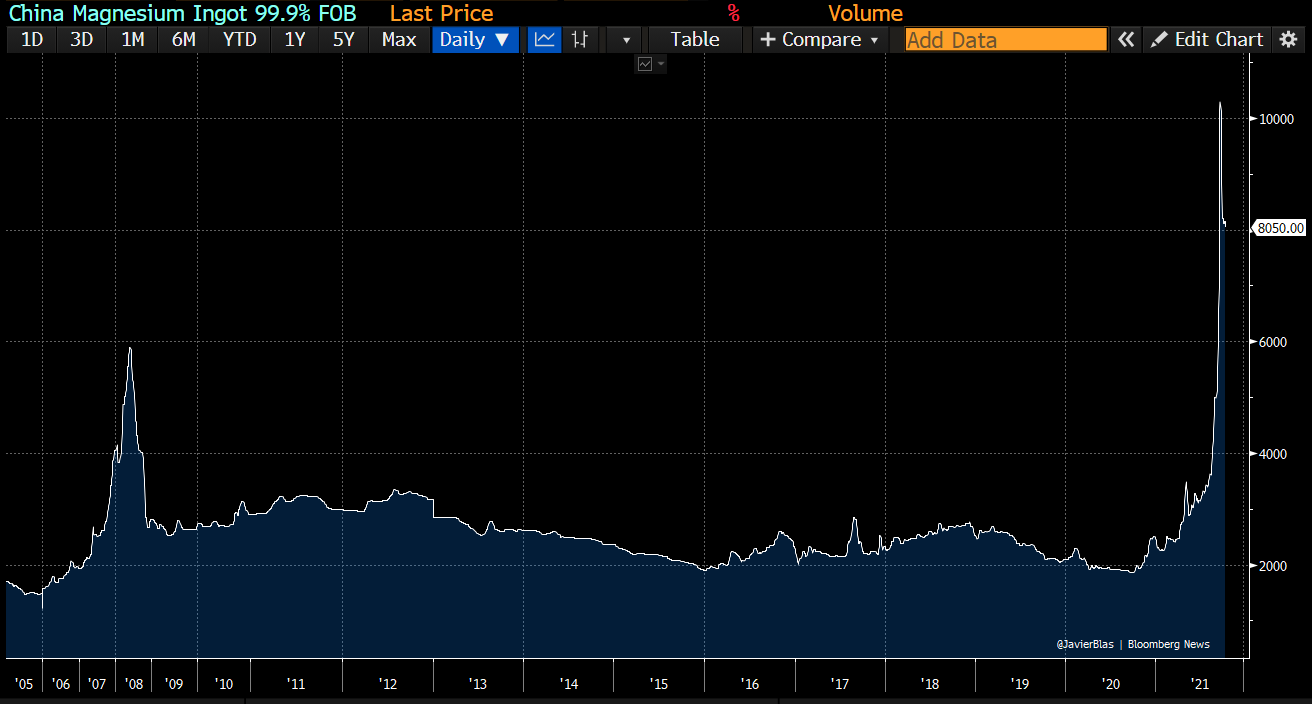 The rise in this commodity is problematic for the whole of industry: this component is essential for producing steel and, above all, aluminum. 95% of Europe’s magnesium needs are imported from China. The crisis in logistics and Chinese energy is amplifying this tension on the prices.

The situation on magnesium stocks risks adding additional tension to the prices paid by producers.

In Germany, the PPI index is up 14% in the monthly variation: 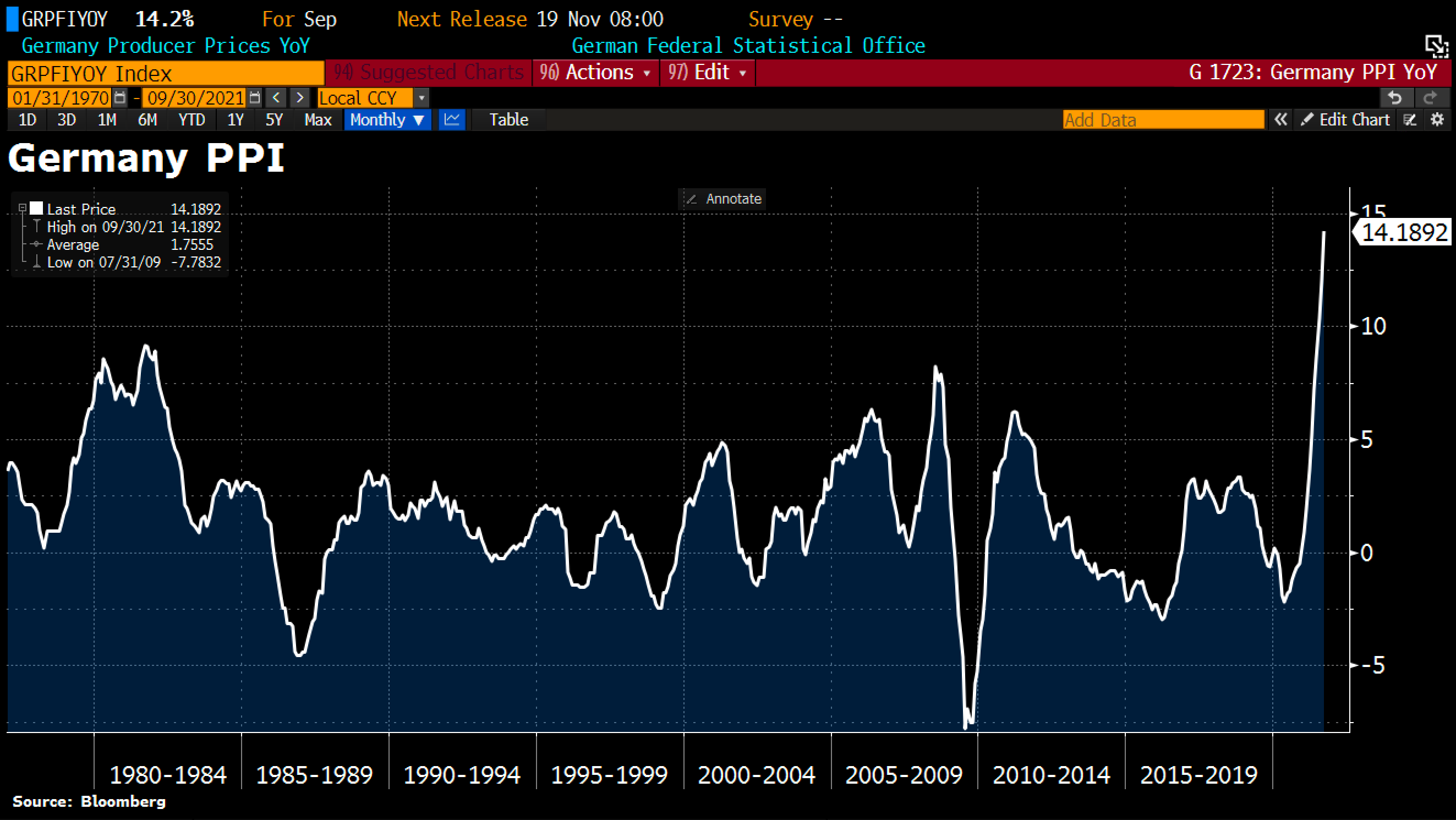 This is linked to the explosion in energy costs... 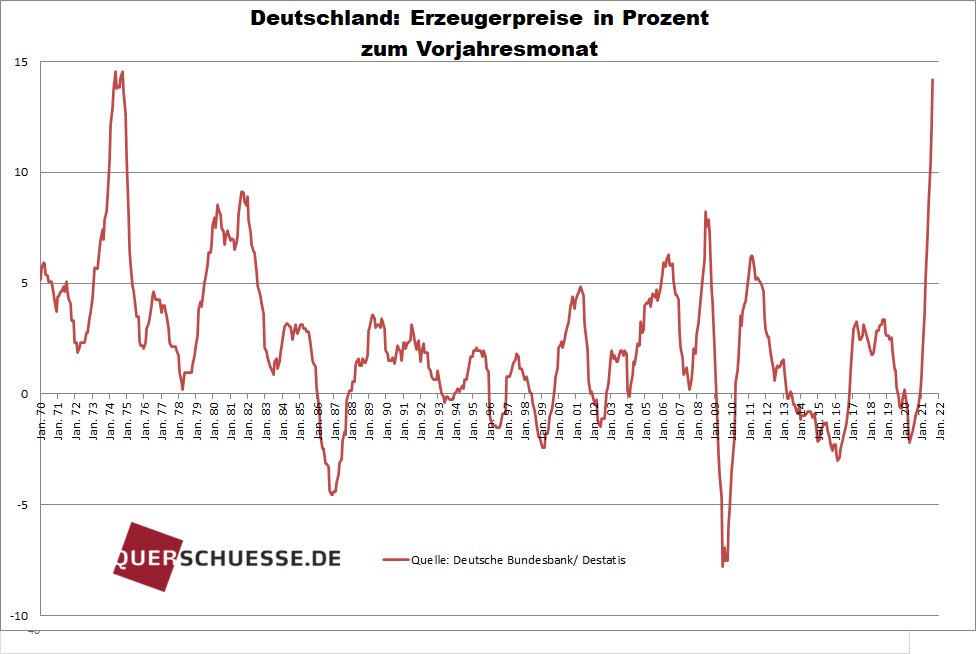 ...but not to that alone: outside of the energy sector, the prices paid by producers are taking off by more than 8% compared to last month.

This rise in inflation, which we had anticipated in our previous bulletins has come as a surprise for numerous observers. Remember how, last summer, the very idea of an inflationary episode was seen as laughable in Europe...

"The perception of a persistent risk of inflation is decelerating in the USA and remains very moderate in the Euro zone. In the Euro zone, Germany is being more reactive. If the downward trend continues in the US, the Fed won’t need to take urgent action. The ECB won’t need to act urgently either."

We have moved from a risk of inflation that was virtually at zero to a veritable panic about the situation as regards shortages on the ground, which, let’s remember, is merely an additional stage in the inflationary cycle we have been experiencing for several weeks.

The problems with shortages of supply are connected to this evolution in the inflationary cycle. The supply chain is operating at full capacity and cannot respond to a demand that has been over-stimulated by more than 18 months of pumping into the void at the fiscal and monetary level. Faced with this artificial demand, the logical instinct is never to increase supply, but to increase prices enough to reduce the demand.

This is what Jim Bianco, a macro analyst, explains in a Twitter thread, detailing this phenomenon in relation to the situation of blockage of the supply chain:

The supply chain is running at capacity and cannot keep up with overstimulated demand thanks to 18 mos of fiscal/mon priming.

This suggests the fix is not expanding supply, hard in the ST, but to raise prices high enough to reduce demand.

The Port of Long Beach is already at the limit of its logistical capacities, there is a shortage of trucks and heavy goods vehicle drivers, and there is a lack of storage space...

In other words, the U.S. production chain is at maximum capacity...at a time when consumption, having been stimulated artificially, is skyrocketing. 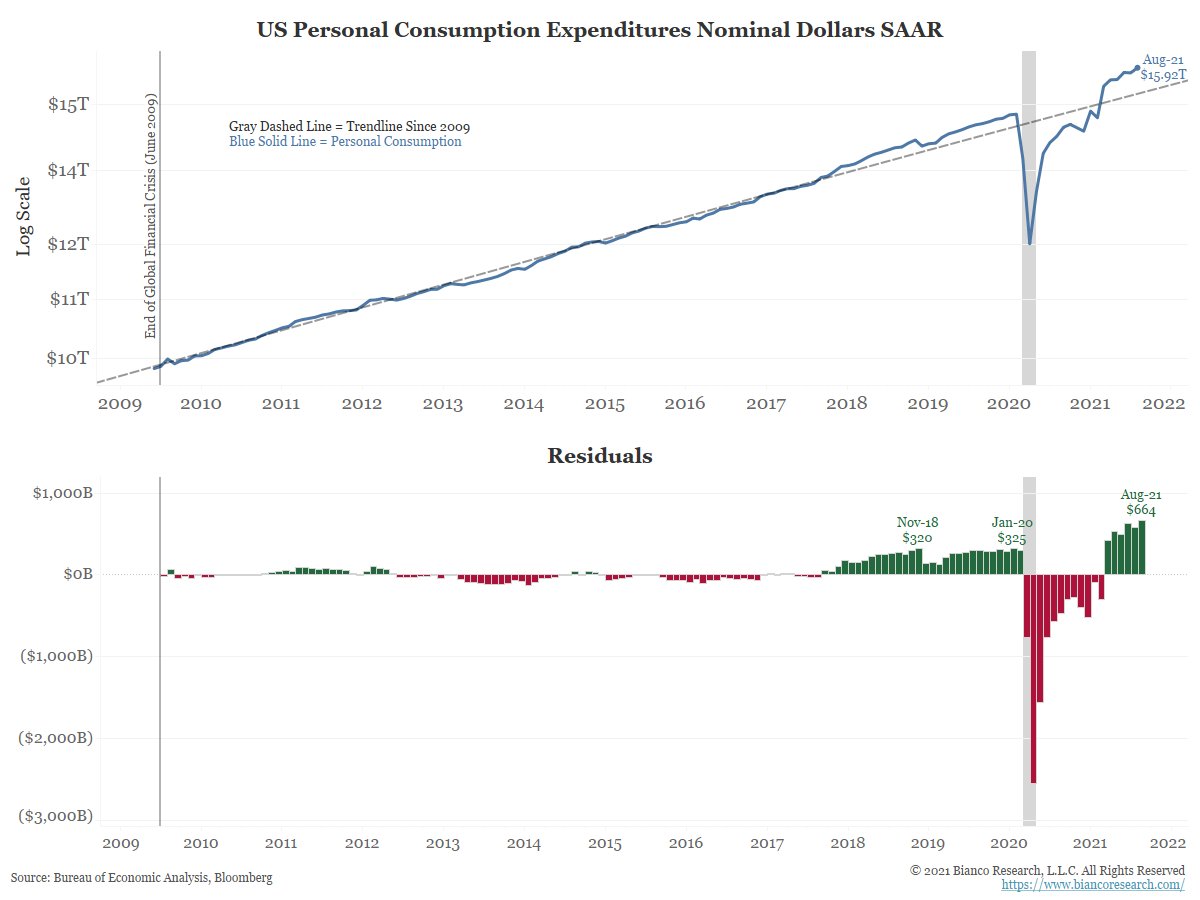 The only possible way out of this situation, ultimately, is a fairly logical one: even though those schooled in modern monetary theory think that supporting demand in such a context would reduce inflation, we can clearly see that, confronted with the limits of extension of the production chain, it is – on the contrary – prices that are going to have to increase sufficiently to be able to reduce the demand. This is strengthening the prospect of stagflation that we have been talking about here for several weeks.

A rise in prices and a fall in demand.

At a time when the markets aren’t expecting either of these things!

The inflation that we are currently seeing is starting to be accepted, but its transitory impact is being defended tooth and nail by most fund managers. The reason: admitting that the inflation is here to stay would require them to completely redefine their portfolios. Managing assets in an inflationary cycle is a sport that no manager in the current generation has practiced yet!

The bonds market is nonetheless starting to send precise signals about this inflationary phase. The U.S. 5 YR Breakeven Yields are in the process of leaving their long phase of consolidation, an advance signal that the market’s perception is that the inflation is no longer transitory at all: 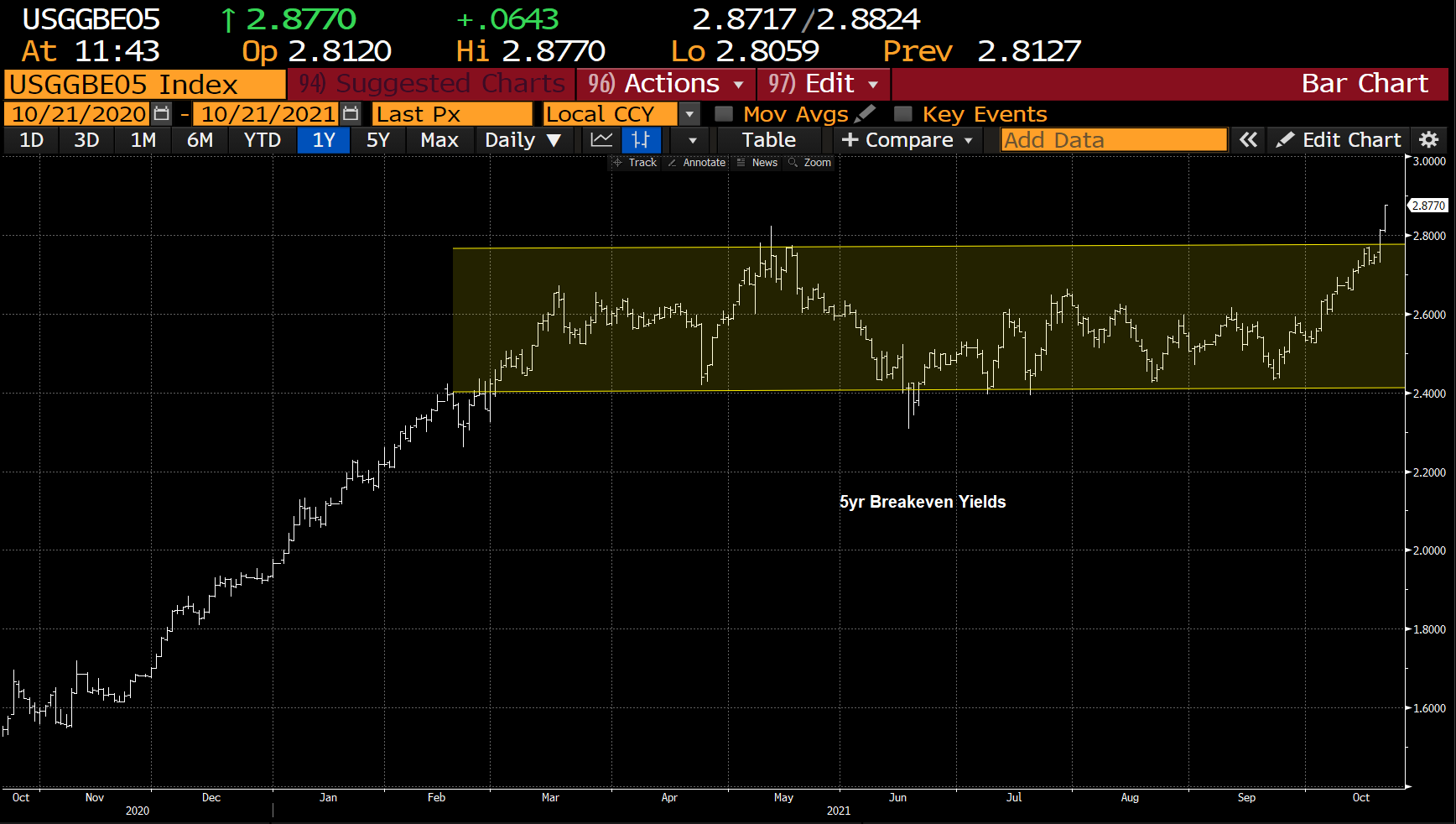 The inaction of the monetary authorities is, in itself, a sign that the Fed is late to act on this inflationary movement.

The rise in the price of gold in a cycle of yield increases is the signal that the monetary authorities are late to act on the inflationary cycle. Historically, gold has never performed so well as when the central banks ‘run’ after inflation, and lag behind in terms of the rate of increase. Today, this lag is even larger than it was during the inflationary cycle of the 1970s...

Against this backdrop, the potential for a rise in the price of gold is enormous. In the short term, though, it is the futures market that is calling the shots...

Last week, the expiry of options led to a great deal of volatility. On the eve of OPEX day, the equivalent of 9 months of production by the two biggest gold mines was sold on the Comex in a matter of minutes, so that the futures contract for the month in progress could be closed below the $1800 mark, thereby avoiding a situation whereby too many ‘in the money’ call positions had to be remunerated.

On the charts, gold is once again testing its consolidation support, from which it still cannot extricate itself: 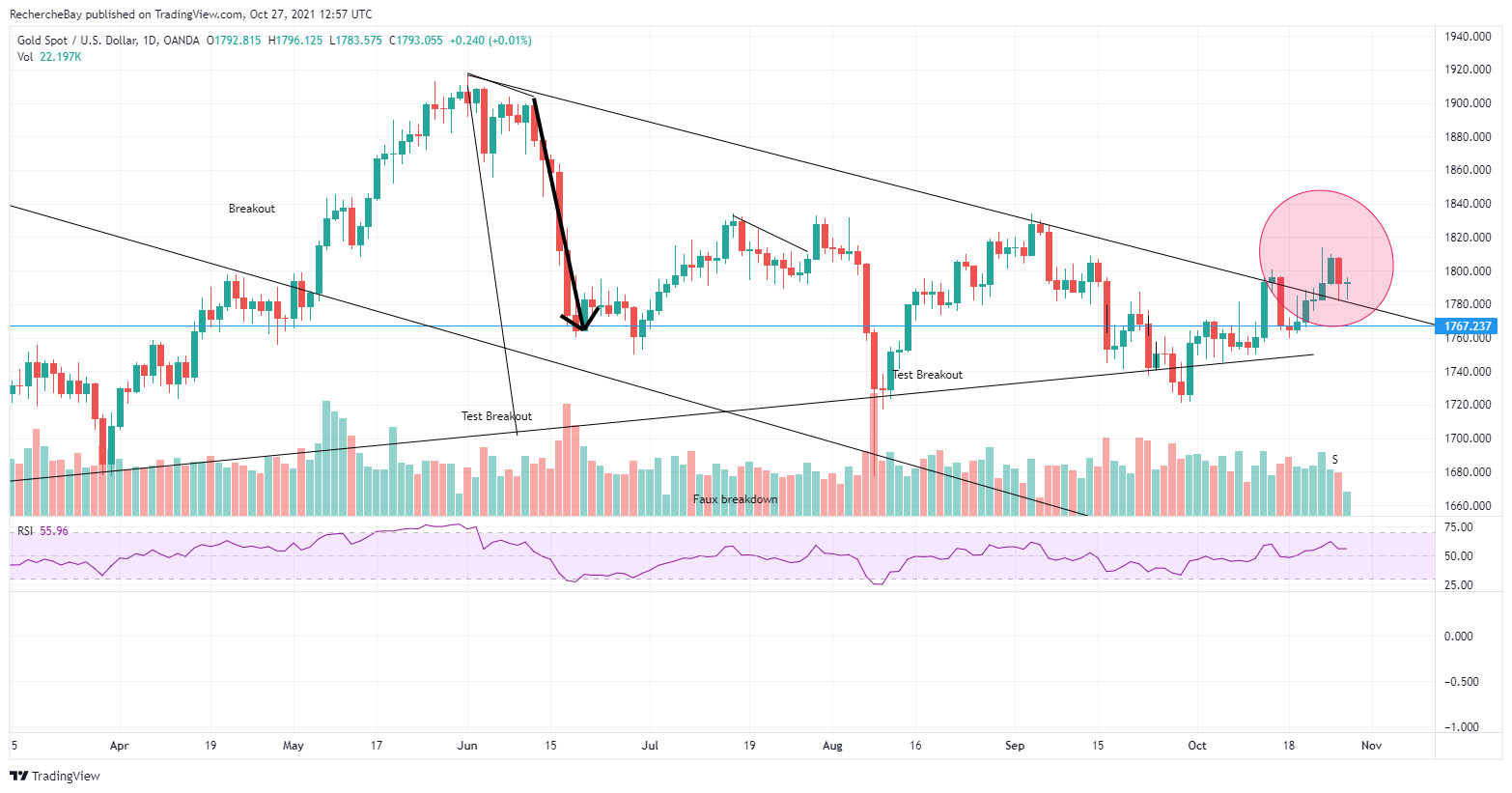 The mining stocks have not reacted at all to the violent corrections to gold in the last few days. For the time being, the mining stocks no longer believe that the correction of the precious metals is going to continue, and this is a fairly good sign for the continuation of the bounce-back that began in the sector in September.