This week, the housing market is making headlines in the United States. The increase in real estate prices is happening at a rate not seen for 30 years. The sale price of properties is soaring in virtually all U.S. cities, with two-figure increases compared to last year: 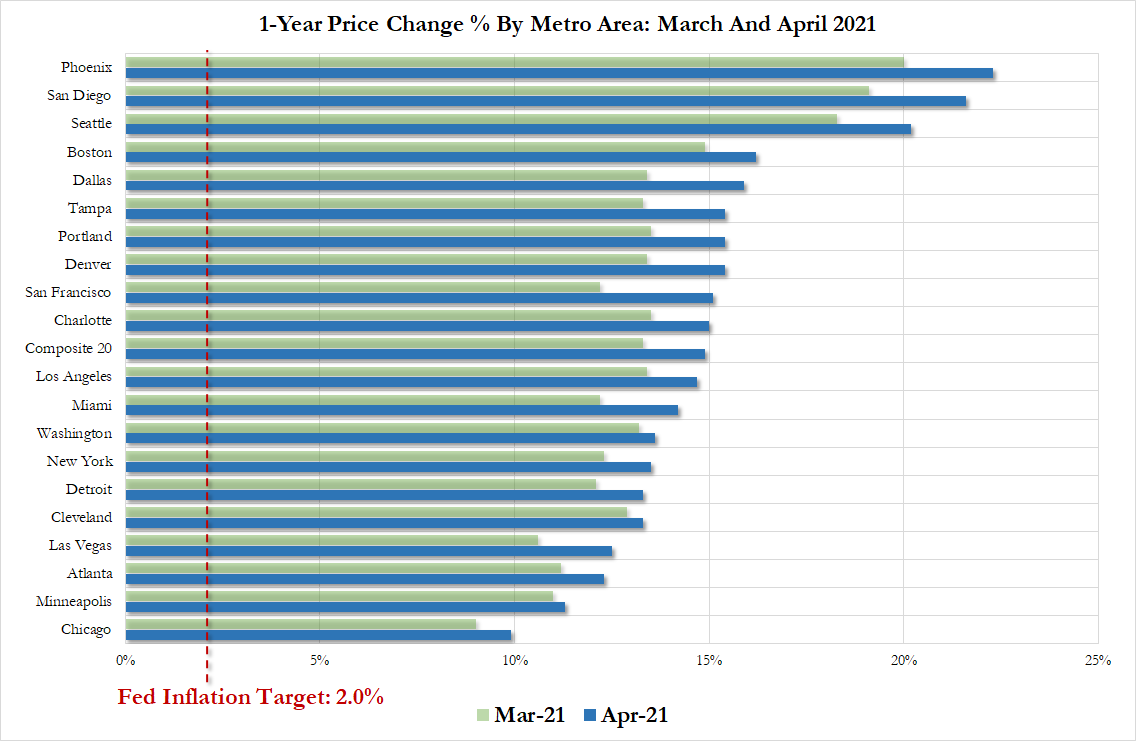 The increase in prices is affecting new properties, too. It has never been as expensive as it is right now to build a house in the United States.

Despite the correction suffered by the price of construction lumber, the price of oriented strand board has risen constantly over the last few weeks, thereby making the price of building new homes even more expensive: 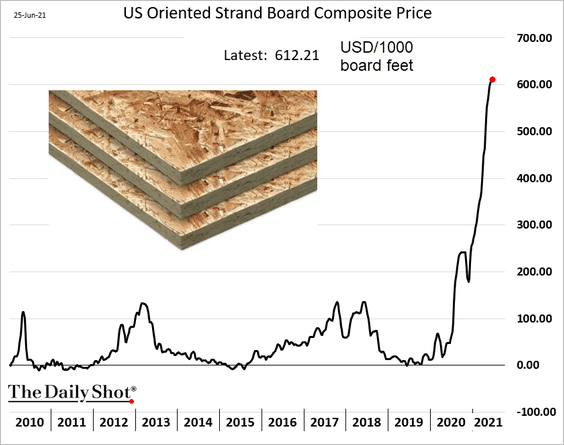 The increase in the price of this processed product is taking place even as the commodity is undergoing a significant correction: this is a measure of the extent to which inflation is an inertia-based phenomenon that is difficult to counteract. The very brutal rise in the price of commodities seen in this first part of the year is leading to a diffuse increase in prices, which is taking effect in spite of the transitory corrections to futures prices.

The rise in the prices of materials can also be put down to the continuing rise in energy prices, which are at their highest since 2014, and in the price of transportation for processed materials.

This rise in transport costs is being reflected, needless to say, in the prices of imported goods.

This spreading of inflation, which we have been detailing for several weeks, coupled with rates that are at an all-time low, is triggering impulsive decisions to buy in the real estate market, and this rise in prices is now spreading to the rental sector. Rents are skyrocketing. The CPI component of equivalent rent should mimic the price of rents and start to rise steeply. 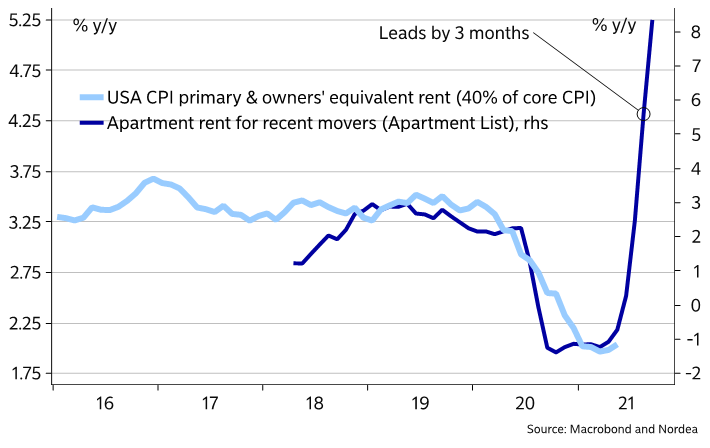 Knowing how significant this component is for the CPI index in the United States (an index on which the Fed keeps a close eye), we can deduce that it still has considerable potential to rise further in the coming months. The “transitory” phase of inflation risks lasting far longer than expected...

And since the recovery of consumption is closely linked to imported goods, any increase in the price of energy and in transportation costs is going to have all the more of an impact on the inflation experienced. The United States is a long way from being a place where local consumption prevails, and this recovery is not yet helping with the recovery of domestic production, unfortunately.

Furthermore, the recovery in the jobs market is focused mainly on the leisure and hospitality sector, and on the public sector: 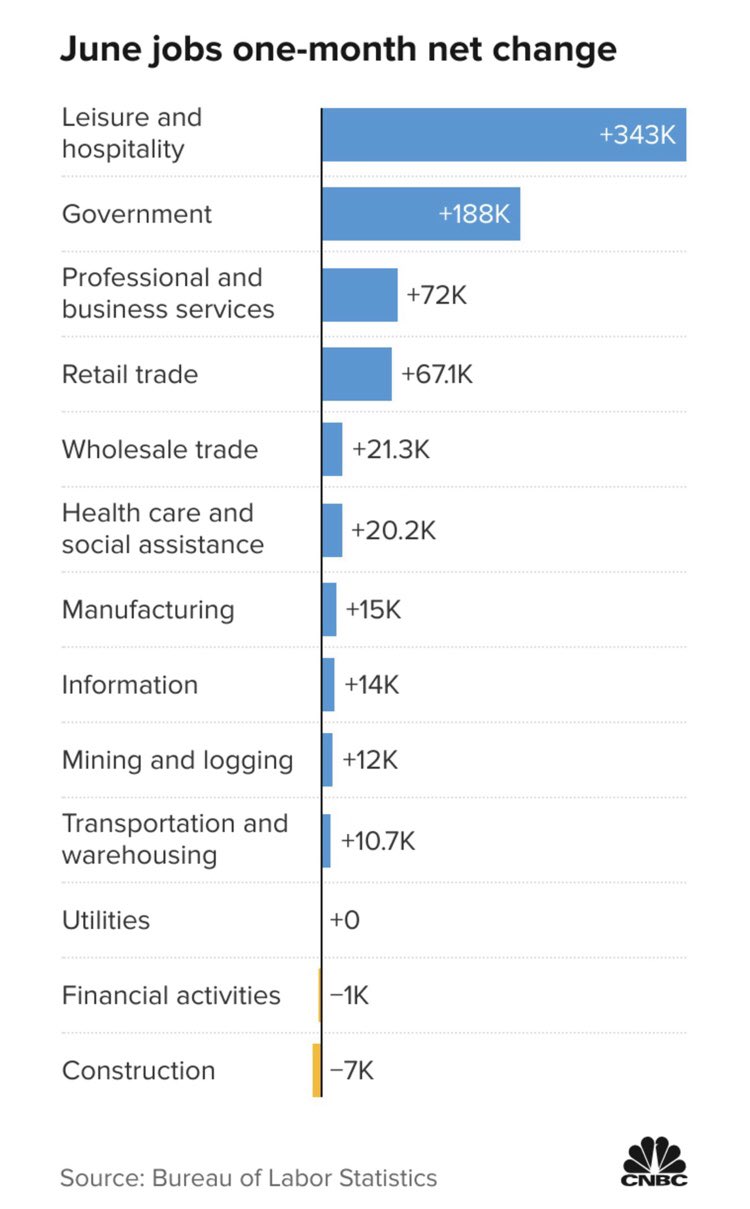 We can see, with these figures, that if the American people were required to consume what is produced locally, the number of jobs created would be zero...and the supermarket shelves would be empty! U.S. consumption depends on its imports, and this pushes the inflationary risk over the coming months higher still.

On top of that, the level of the lowest salaries, in view of this inflation, is starting to have the effects of a shortage.

The number of people quitting their jobs is soaring. It is increasingly difficult to keep hold of an employee in the most over-stretched sectors: 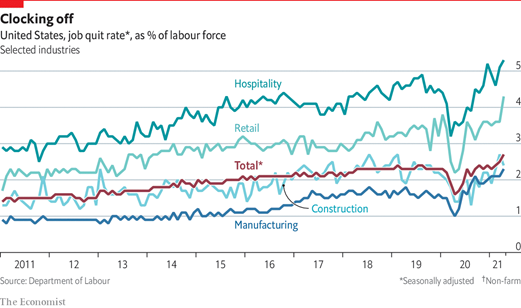 On the ground, this is what people are noticing more and more. In areas that attract tourists, it is increasingly difficult to find staff who are willing to work for $15 an hour. It has to be said that we’re looking at an impossible equation, here: an employee on such a low pay grade is not compatible with soaring rents and gasoline prices that have doubled in a year... People are finding that it’s more worthwhile to quit their job, or move house, than pay costs which ultimately turn out to be far too big in comparison with their earnings.

It is entirely understandable that this situation is starting to cause a fall in U.S. confidence in the face of inflation that has become uncontrollable. The consumer confidence level is collapsing, just as expectations about inflation are continuing to shoot upwards. 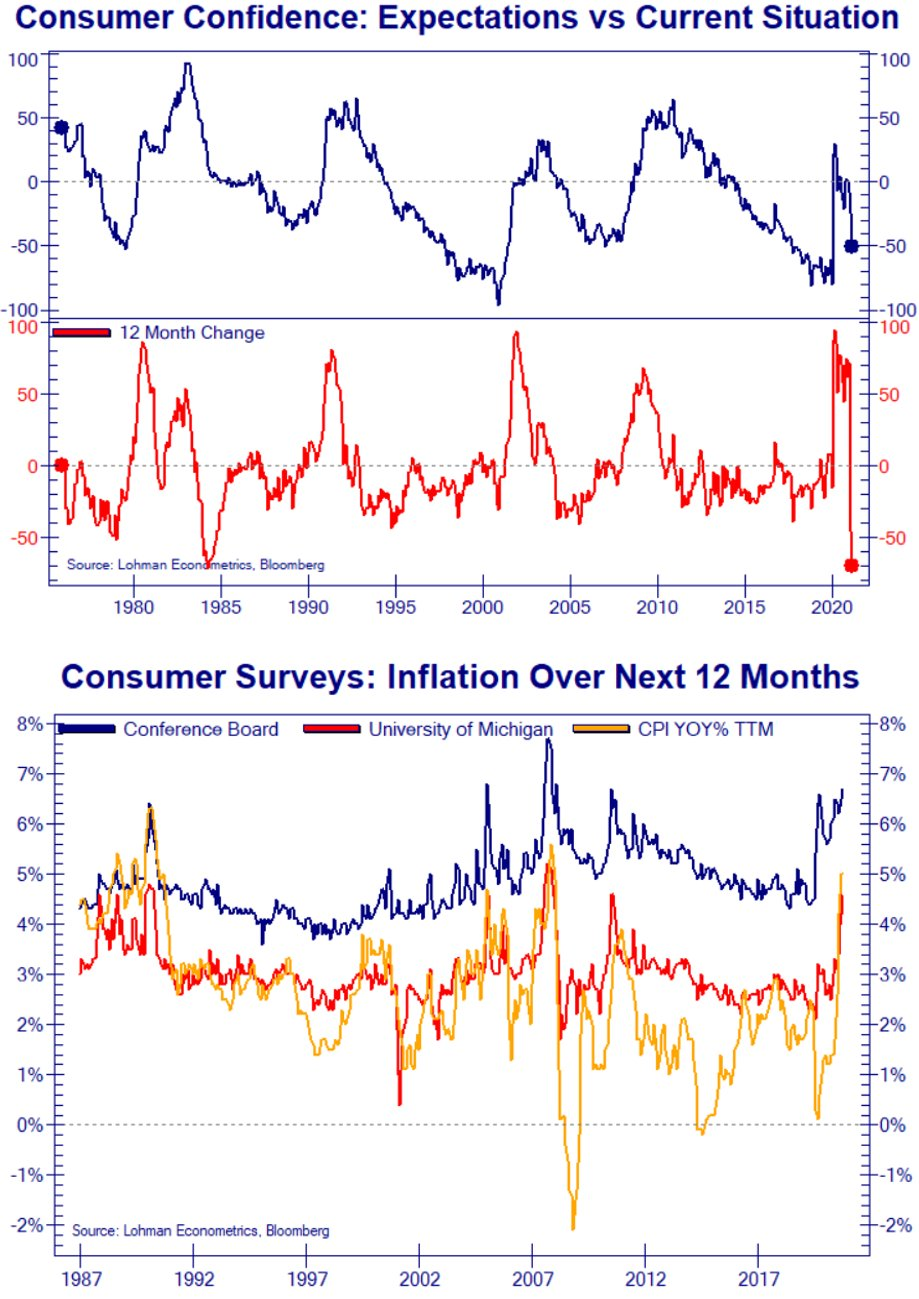 Last March, Jerome Powell bet that businesses would have little inclination to increase their prices; that was the basis of his speech about the “transitory” effect of inflation. Contrary to his forecasts, the ISM index of prices paid is now at its highest point since 1979. That year, a certain Paul Volker managed to take the situation in hand, at a time when inflation had become uncontrollable.

Today, the CPI is heading toward 6% and what needs urgently to be done is...wait.

Wait...so as not to risk, above all, provoking a brutal fall in the prices of assets to a level kept artificially high by the effect of a monetary policy that is far too accommodating. It is of urgent importance to maintain, at all costs, the crazy valuation of a market which now represents more than 205% of GDP: it is, quite simply, the biggest bubble in history.

As Jenny Harrington writes, "when the Fed expands its balance sheet, the S&P 500 follows". It’s as if the SP500 had been nationalized, with the Fed now being the only actor that determines the price of stocks. The Fed prefers to let the inflation, which is increasingly uncontrollable, skid out of control, since any violent action on the rates would have a devastating effect on this asset bubble. In 1979, Volker was not in the same situation: he wasn’t sitting atop a bubble as big as this! Today, it is impossible to increase the rates brutally without bursting that bubble. So let’s wait and see...and if the inflation generated by this waiting causes damage in the real economy, particularly to the least affluent classes of society (those who do not possess the assets that the Fed is trying to keep at insane valuations), these low-income groups will, unfortunately, be the ones hardest hit by the return of inflation...

The markets, in any case, are not anticipating any action on the rates in the short term. The U.S. ten-year rate has begun to fall again.

We should see gold making up ground on the curve of the rates this summer. The last time the rates were at this level, with a dollar as weak as this, gold was at around $1950, meaning that there is fairly sizeable potential for a further rise for gold if this catching up were to take place.

Looking at the charts, gold has just tested its consolidation line, which was initiated last August. The MACD crossover in the daily chart indicates a new phase of increase to come, and this corresponds to the positive seasonality of gold in the next few weeks. 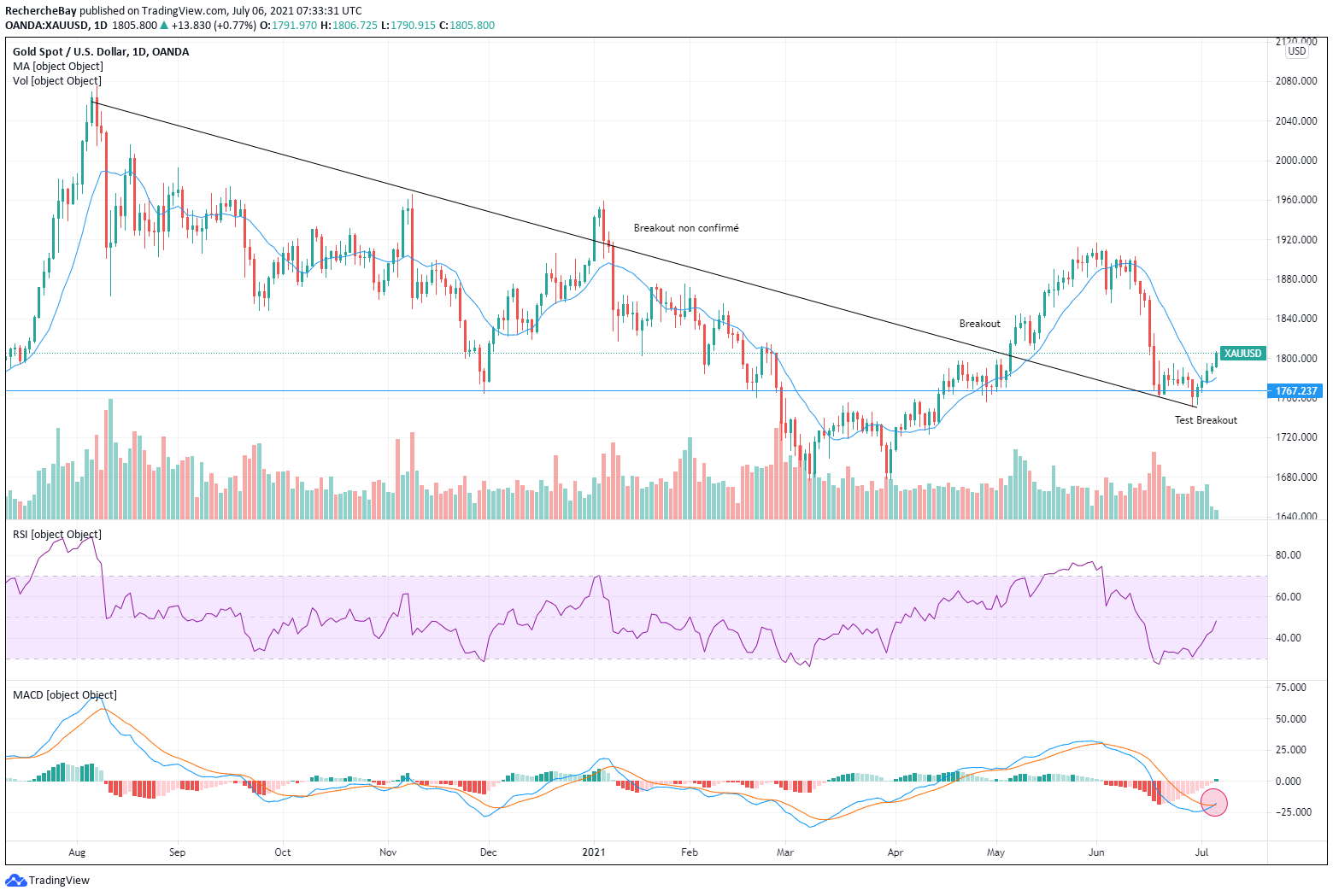 The central banks have taken advantage of the correction in recent weeks to expand their reserves. Thailand added 47 tons to its vaults in May, to follow its purchases of 43 tons in April. Hungary, India and Brazil are also significantly increasing their reserves. In total, more than 230 tons of gold have been purchased by the central banks in the last few weeks.

As for the silver market, it is still as squeezed as before. The Comex delivered 450 tonnes on the first day of its July delivery; that’s almost 2% of the annual production delivered in just 24 hours. The stocks on the Comex are continuing their slow decline, while those of the SLV tracker are also continuing their noticeable fall. Only the PSLV, Sprott’s tracker, is continuing its advance at a record pace. PSLV has added nearly 1 700 tons of silver to its vaults since the start of the Silver Short Squeeze movement. 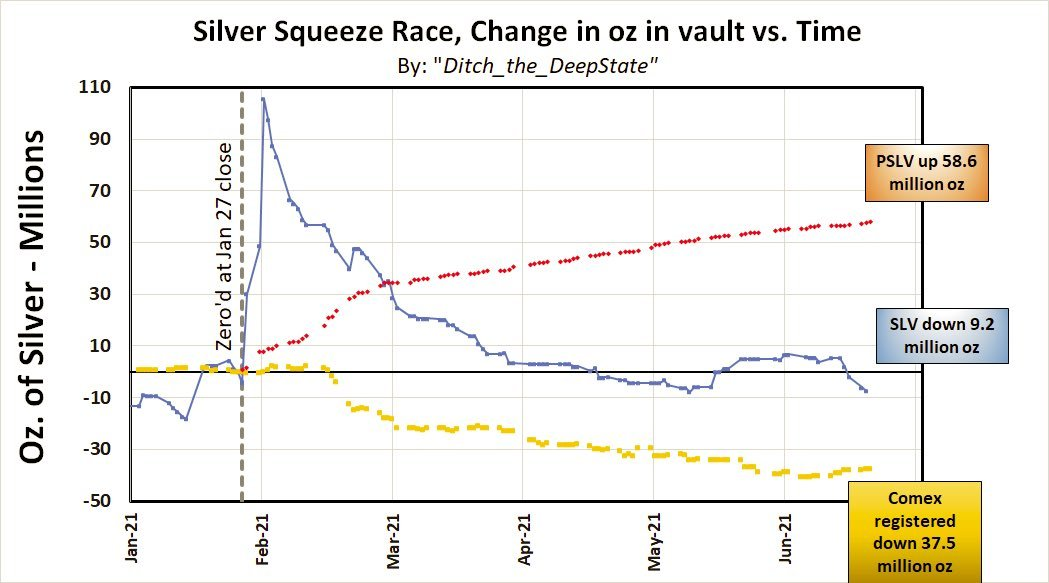 This week offers a unique opportunity to bring about a migration to the mining stocks.

The markets, indeed, have just sketched a double top in relation to the mining stocks, with an MACD bearish crossover to come, in an exceptionally overbought zone. 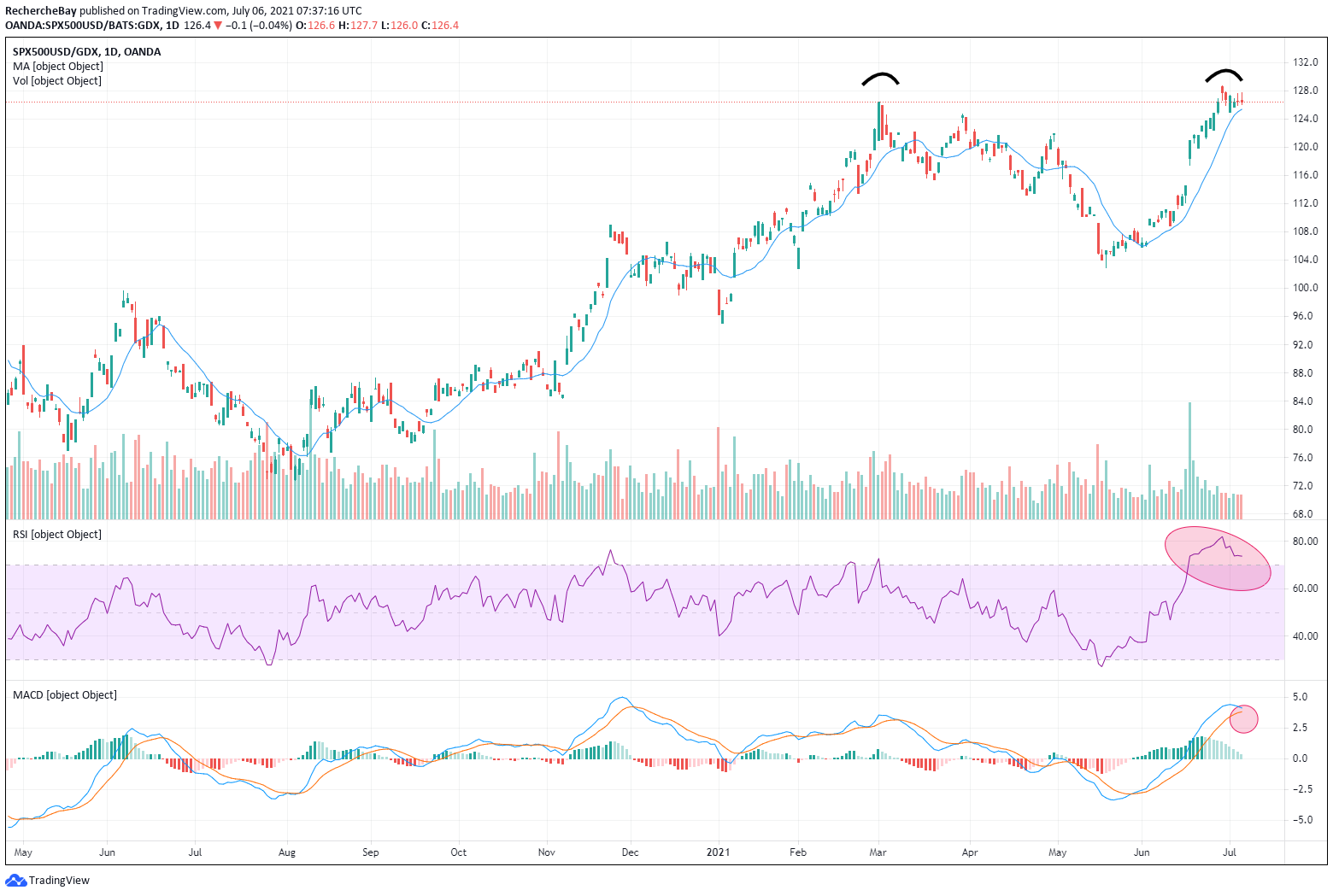 The GDX index is rebounding, right now, on its second target of an ABCD figure, with a hidden bullish divergence and an MACD crossover to come. 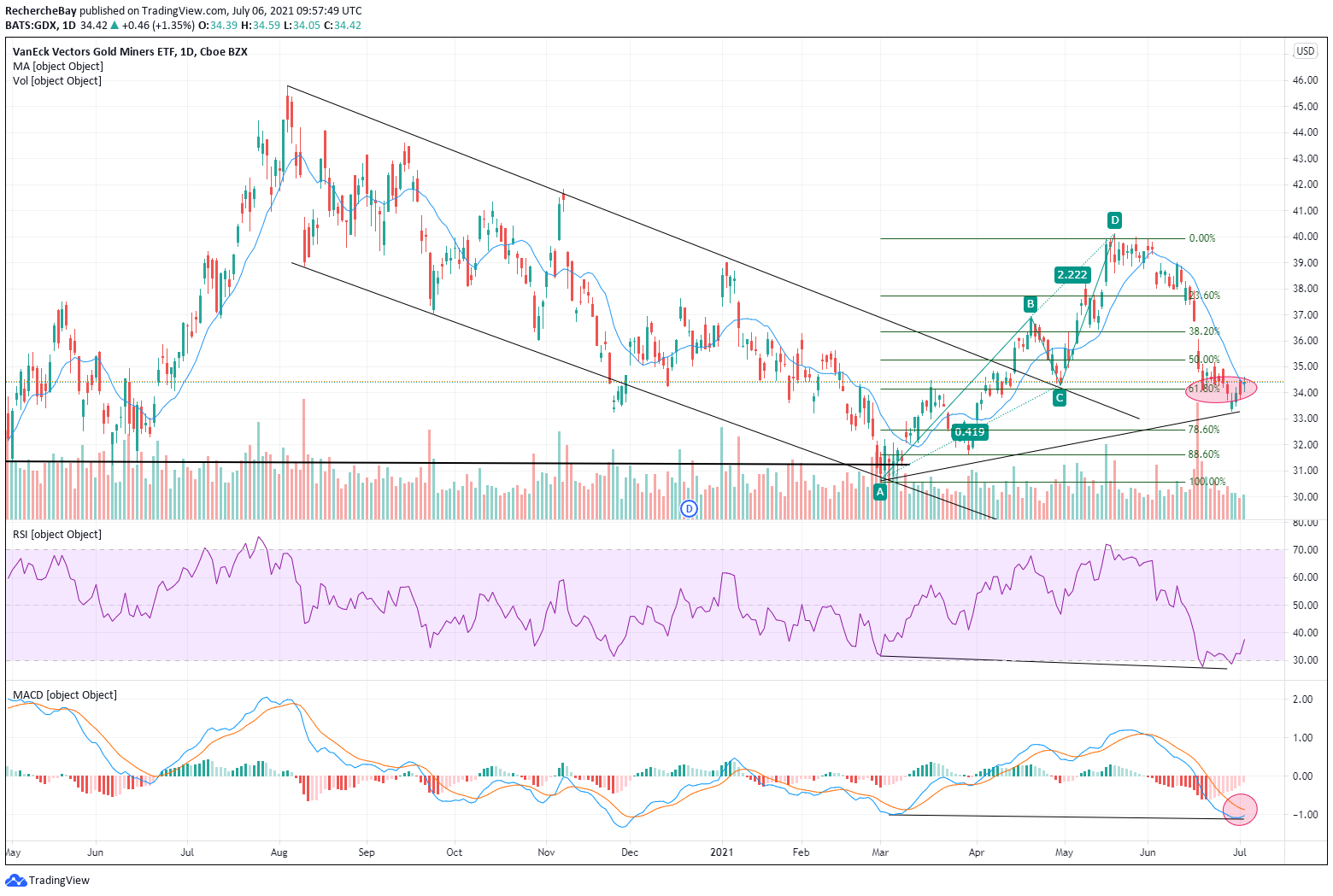 It remains to be seen whether the volumes of purchases will follow this week. It is to that indicator that we will turn our attentions for the continuation of this rebound.