This week, Chile's highest court ratified the closure of the Pascua Lama mining project, one of the largest copper mining projects in South America. Last week, Rio2 was forced to rethink its Fenix project on environmental grounds, a decision that jeopardizes an investment of more than $8 billion and sends a new negative message for foreign investment in Chile. The Chilean peso has fallen almost 20% against the dollar in a few days. The market is betting that without its mining potential, Chile will not be able to attract enough capital to revive its economy.

Without foreign investment, the world may very quickly cut itself off from Chilean copper resources, at a time when copper stocks are drying up at a rate never before seen. Copper reserves in China are already at an unusually low level for the season. We have not seen sufficient restocking in 2022. Nothing like the movements of previous years.

Copper is the essential component of "everything electric". We need copper, lots of copper, to drive the energy transition. The graph below illustrates the intensity, in kg/MW, of different raw materials, and particularly copper, in clean power generation and the like. 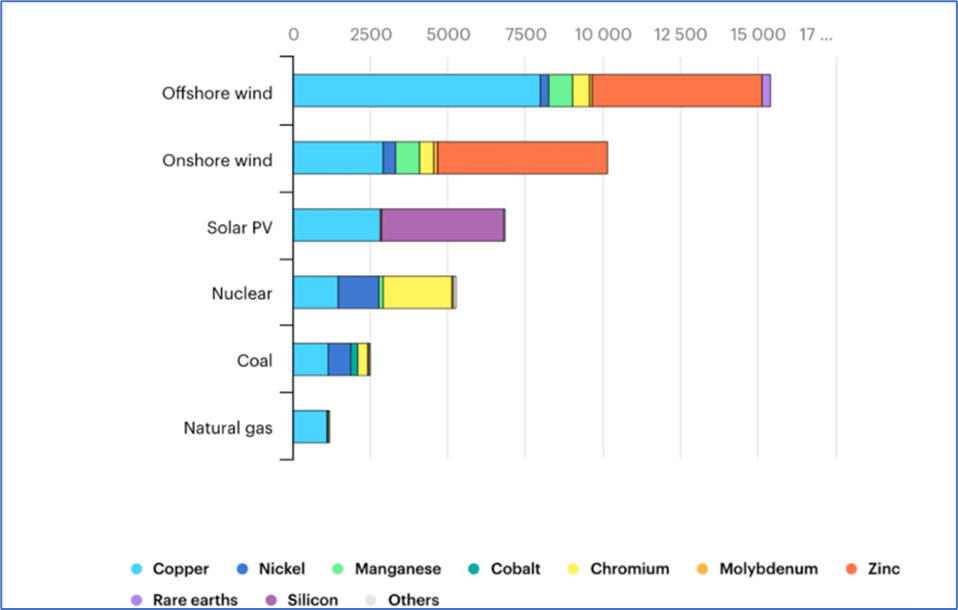 This analysis of inventory and reduced mining capacity in the copper market should be enough to put investors in buying positions.

However, the exact opposite is happening. Speculators have returned to the same level of bearish positions in futures as during the last plunge in March 2020, at the start of the Covid crisis. 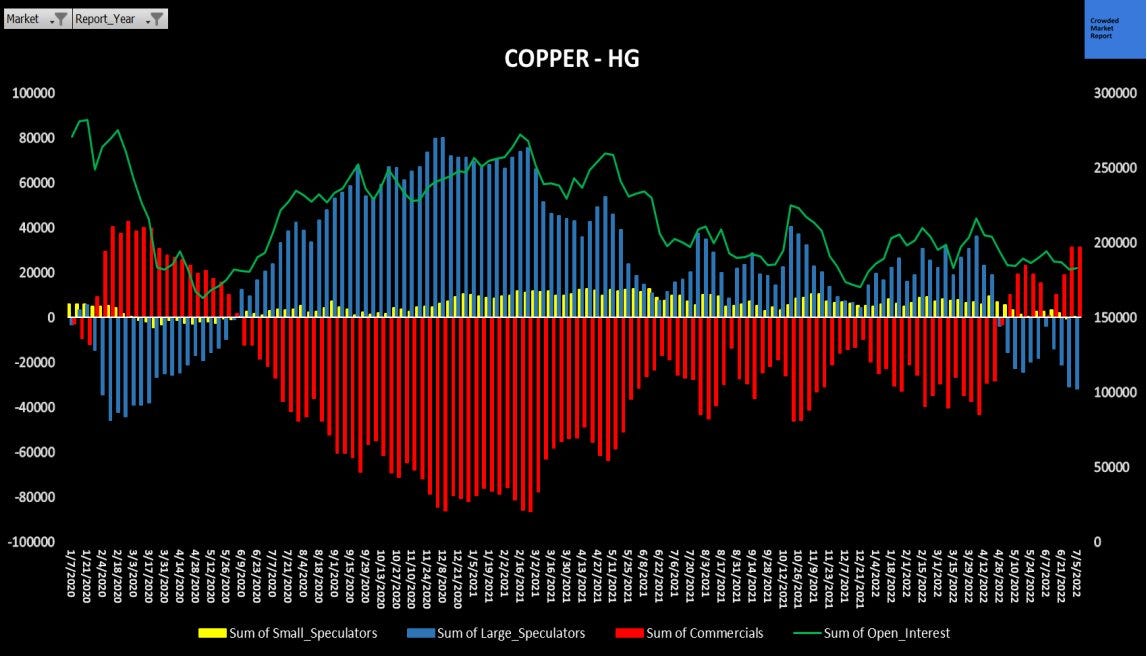 Speculators are betting that China's stimulus won't be able to offset the coming collapse in demand. The $100 billion stimulus will not be enough to offset the fall in private demand for real estate. For these investors, we are just weeks away from a major event in the Chinese banking sector: defaults related to the bursting of the real estate bubble are prompting speculators to bet on a collapse in Chinese copper demand.

The speculators had a very significant impact on copper prices, which collapsed by almost 30% in a correction that was historic in its speed and magnitude. In just a few weeks, the price of copper has returned to the support it had broken through at the end of last year: 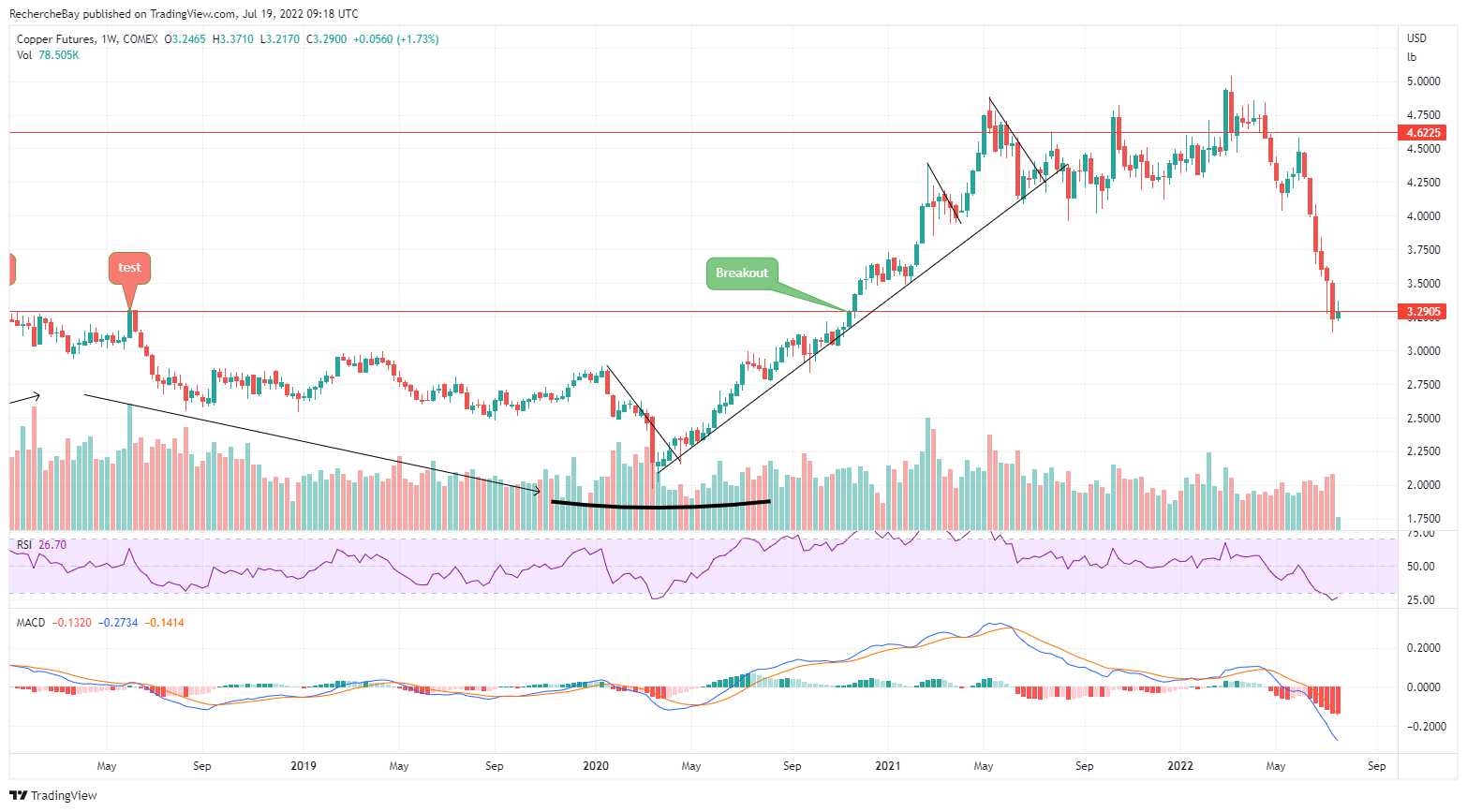 The decline in copper and metals is now a widely reported topic in the press. For example,  Bloomberg reported last week on the gloomy outlook in China, but also in Western countries where recession is now the most likely scenario for the coming quarters, according to a growing number of observers.

Bank of America is now forecasting four consecutive quarters of negative growth (with real GDP declining): the bank is thus predicting a full year of insufficient growth relative to the pace of inflation, which would lead to a general impoverishment over a full year.

Still in the United States, the recent increase in interest rates has caused the average mortgage payment to explode to nearly $1800 per month, up 85% since the beginning of 2020. Under these conditions, it is difficult to imagine a strong return to American consumption.

At the same time, inflation is eating away at real wages, which are plunging to a new historic low: 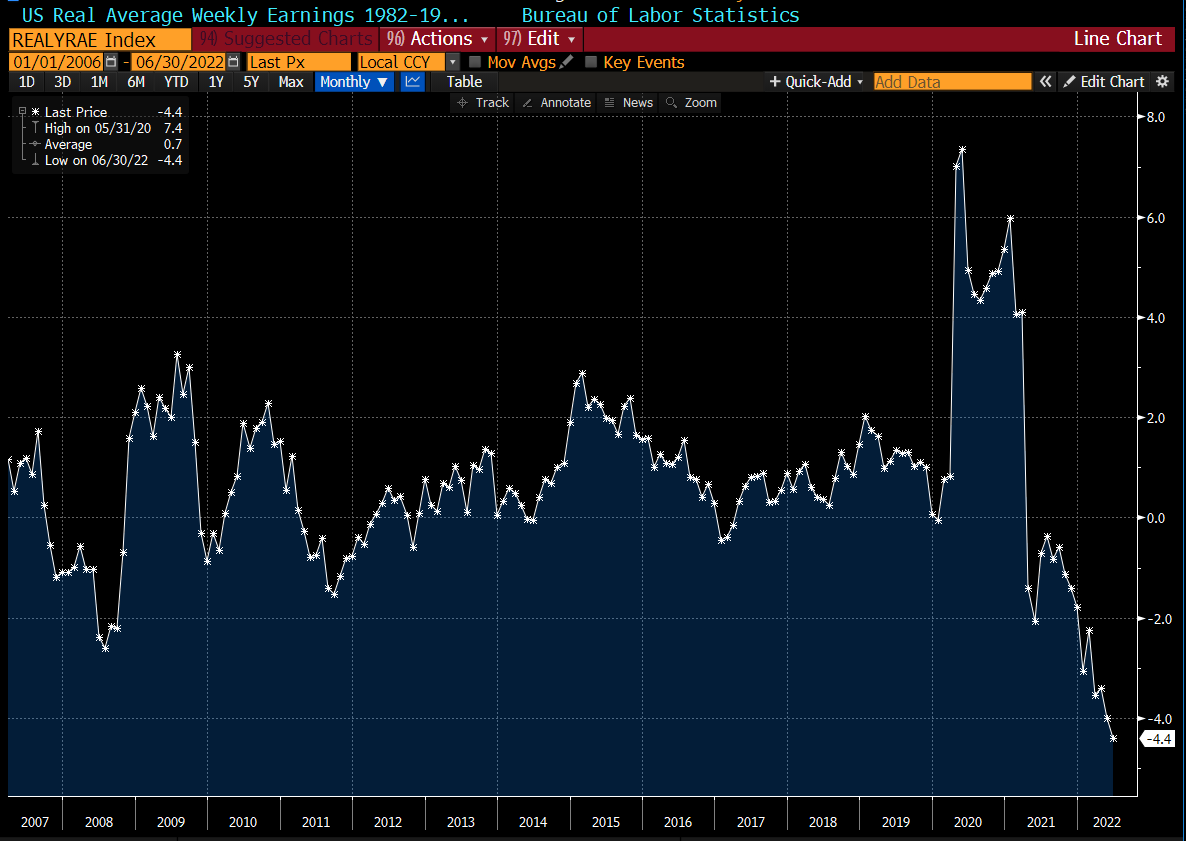 The burden of debt combined with the effects of inflation, which is depressing real incomes, are the ingredients of the economic slowdown anticipated by more and more economists.

In Europe, the energy crisis is worsening and further increases the risk of stagflation.

The spotlight has been on the situation in France for the past few days, where the price of electricity has reached historic highs and is even higher than the already exorbitant prices paid by neighboring countries. 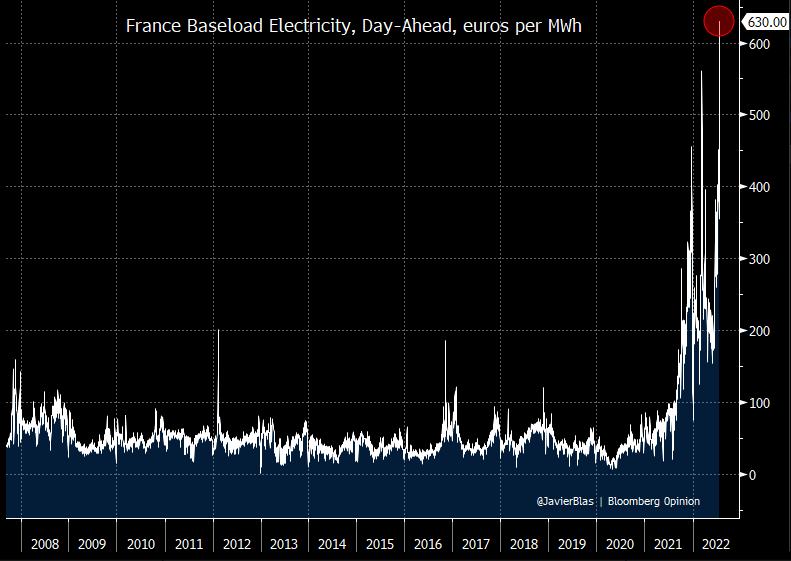 This explosion is due to the European energy crisis, but also to the shutdown of half of the French nuclear fleet for maintenance and prevention issues accompanying the current heatwave.

These price levels herald a catastrophic end to the year for the French industry. After Germany, it is now France that is worrying. Europe is facing a significant risk of recession, fueled by the exponential rise in energy costs.

Under these conditions, it is not surprising to see a historically high number of speculative short positions in the markets. ETFs associated with these bearish index instruments have received a record amount of subscriptions at nearly $10 billion. 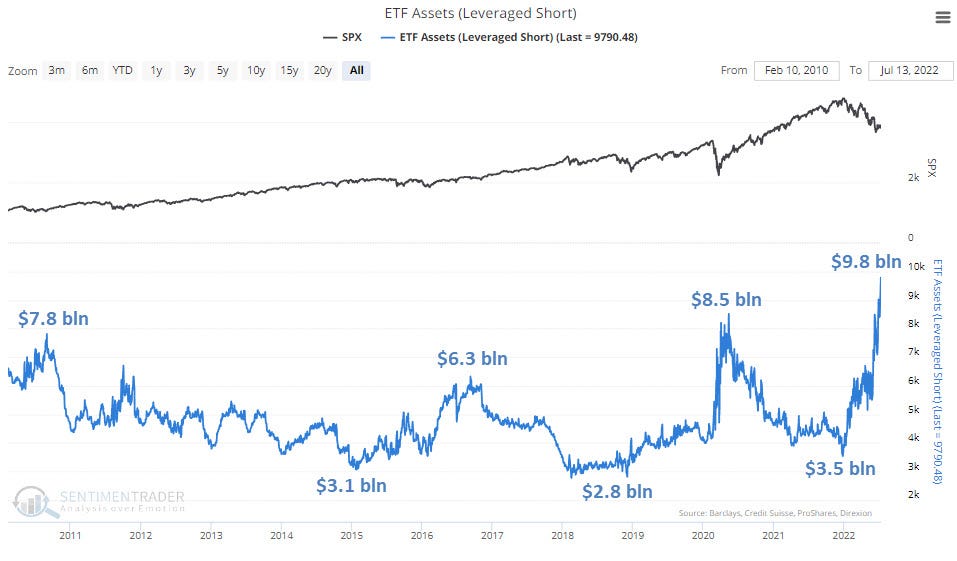 Gloomy growth prospects and bearish market bets are behind the investor sell-off in commodities. It is often claimed that "Doctor Copper" is the leading indicator of global activity. If this is still the case, the sharp correction in the copper market indicates the imminent entry into a severe recession.

While these macroeconomic elements are critical to the determination of metal prices, the analysis of inventories and mining activity is not taken into account at all by participants in their positioning in this market.

Under these conditions, precious metals have corrected in recent weeks. And the more industrial the precious metal, the more it is affected by this downward movement. So silver has suffered much more than gold during this correction.

The gold/silver ratio has risen back above 90, a level reached only during the March 2020 crisis. 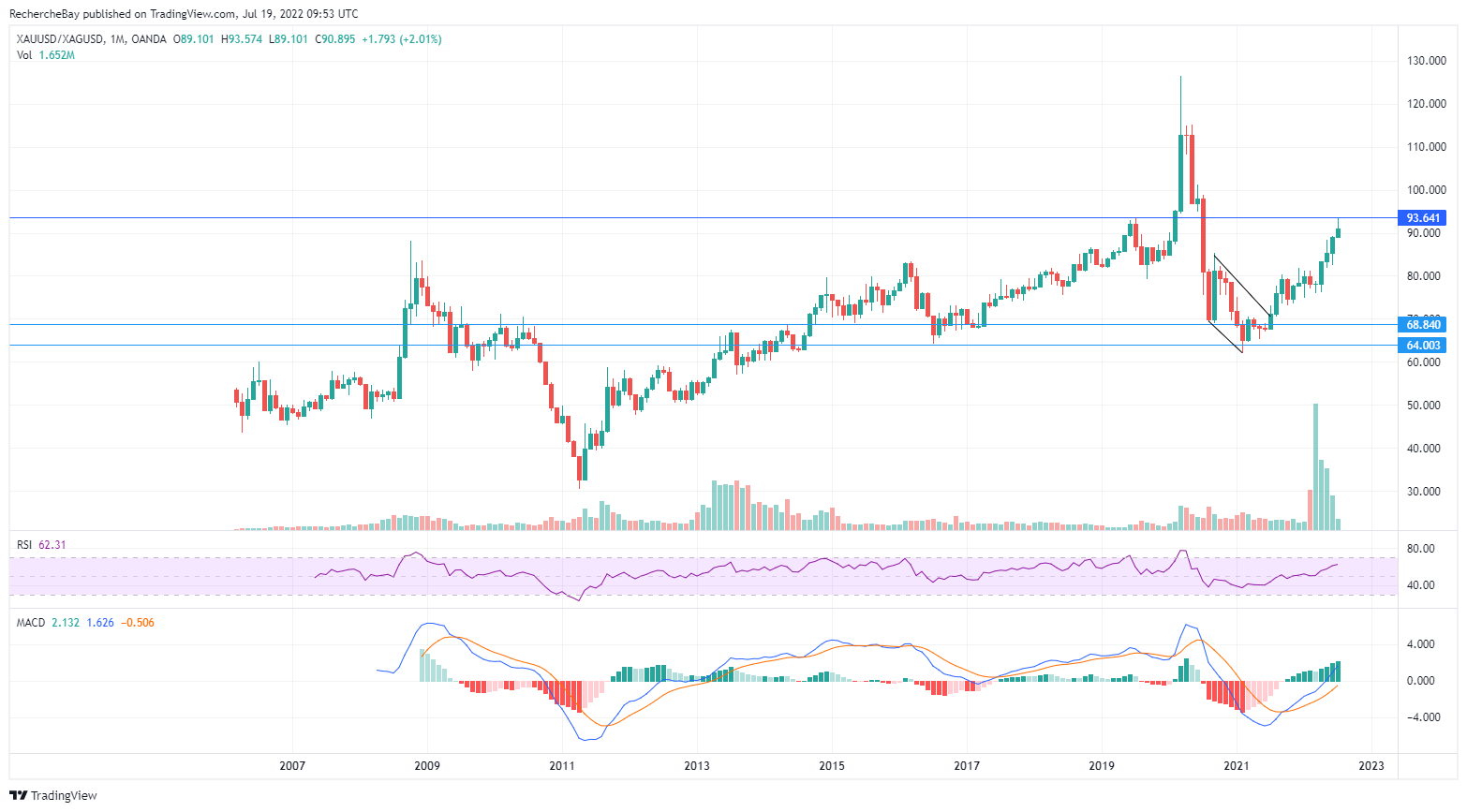 The dollar reached a high against all currencies. The DXY index printed a record high and the turnaround that started a few sessions ago needs to be confirmed again on a weekly basis. 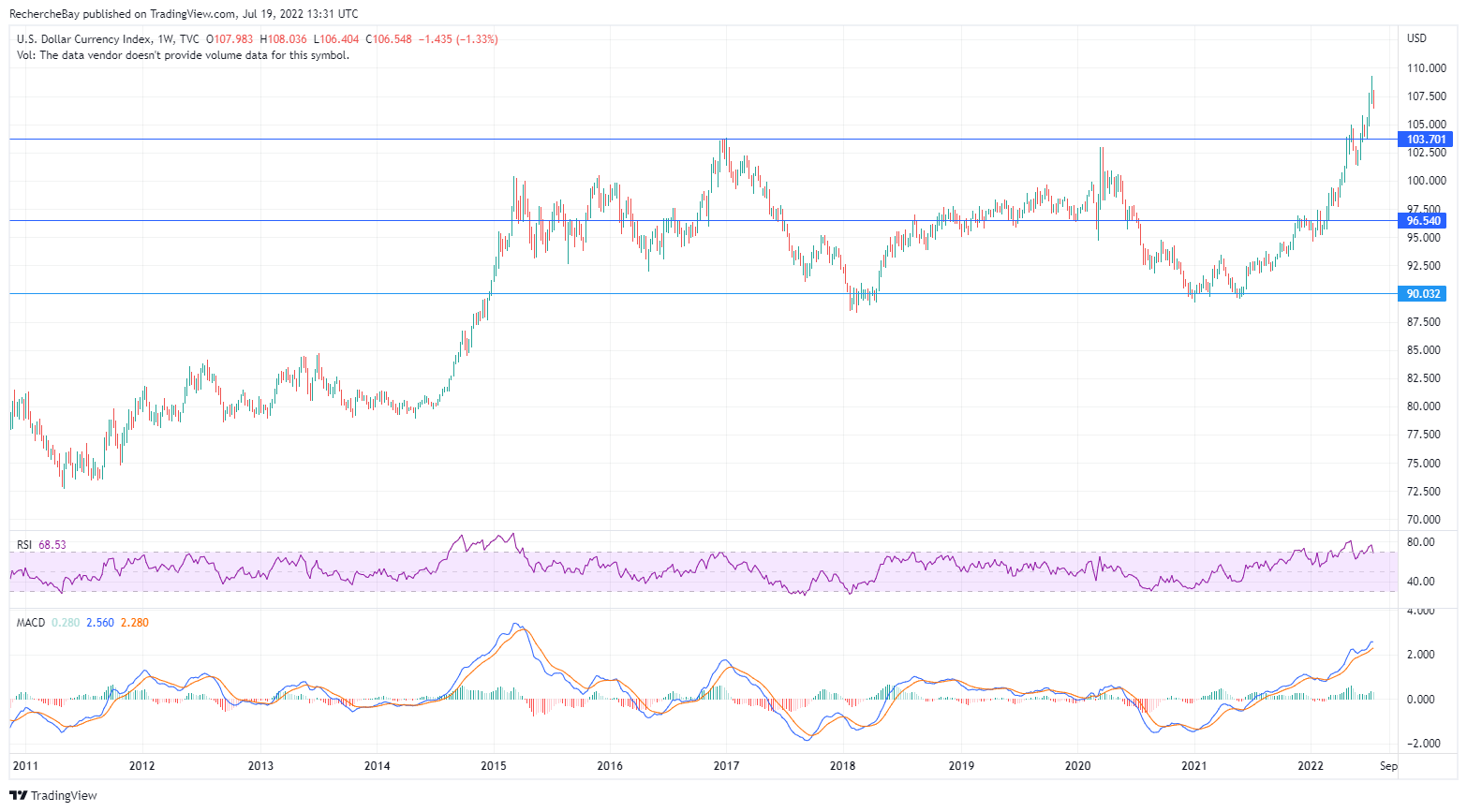 The slowdown in the rise of the dollar, the oversold situation in metals and the high level of short positions should allow a pause in the correction phase of metals. For a true rebound to occur, the market must move from a macro approach to a realization of the reality of available physical inventories. This realization will take place because stocks are not inexhaustible, especially at these price levels. Gold, and especially silver, are likely to be catapulted higher by this sudden realization.