This week, the cryptocurrency crisis continues to dominate the news. After FTX and Genesis, it's now Grayscale that has the markets worried. The likely bankruptcy of Genesis puts more pressure on the Grayscale Bitcoin Trust (GBTC), considered the largest crypto institutional investment vehicle.

Genesis is owned by the same entity as Grayscale. If Genesis goes bankrupt, the GBTC could be dissolved in order to pay off the debts. 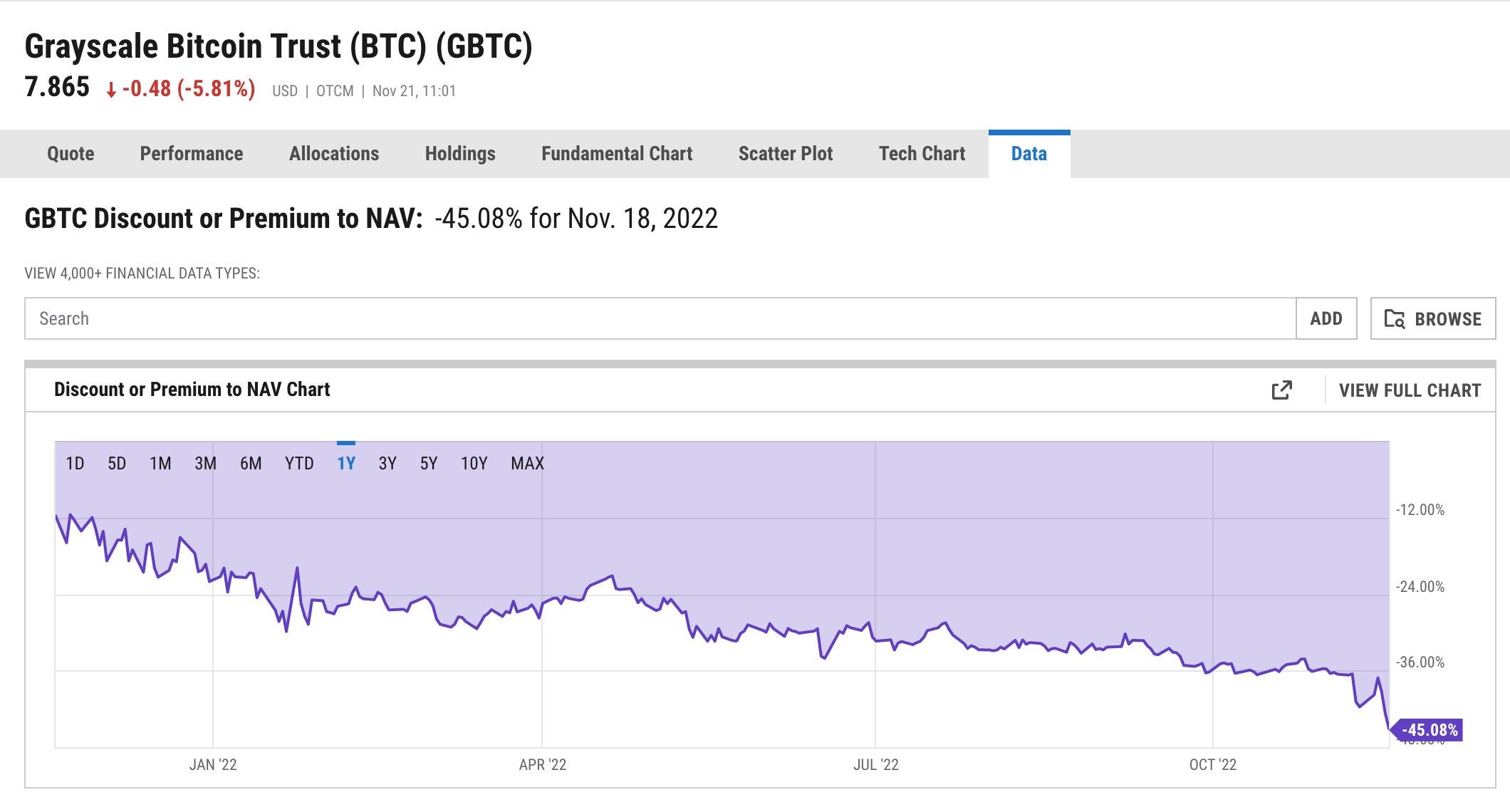 This contagion is unlikely to ease the current run on cryptos. All platforms are affected.

Confidence in the crypto sector is crumbling as auditors and regulators have been unable to discover the flaws in the system in time.

FTX had been audited by the firm Armanino LLP, but they failed to detect the scam. The auditors failed completely. And when you consider that Armanino LLP also performs the financial audits of Binance, it's easy to understand the concern that is starting to build around this platform, which has been spared from the crypto crash. Until now.

In the wake of the wave of sell-offs in the crypto market, tech stocks are logically under pressure.

Elon Musk's takeover of Twitter is another highlight for the tech sector.

Whether one is for or against Elon Musk's brutal decision to cut half of Twitter's workforce, this move may completely redefine investors' expectations of the profitability of tech companies, which have benefited greatly from the Fed's accommodative policy in recent years. Despite a halved workforce, Twitter is working well and even managed to process an average of 20,000 messages per second this Tuesday, on a particular hashtag (related to the World Cup). A record.

We now realize how much free money has favored the development of digital projects that are not very (or not at all) profitable. How could some technology companies invest so much cash in programs that were not viable in the long run? Because the money was flowing. These tech stars employed too many people, paid handsomely, to do menial tasks that are now hard to justify.

Will Musk's arrival as head of Twitter change the way investors look at tech stocks? Will the former stars of this market have to demonstrate that they can generate enough cash flow to justify their market valuation?

These questions come at the worst possible time. The latest services PMI figures at 46.7 already indicate a contraction in US tech activity. Faced with this contraction, the stars of the sector will probably have to reduce their workforce.

Amazon has already taken the lead by announcing job cuts in the middle of Black Friday, a time of year traditionally synonymous with hiring. Facebook is also trying to reassure the market by preparing a massive layoff plan. Meta's planned investment in the virtual world of the metaverse is likely to be significantly scaled back.

The readjustment of technology stocks is taking place at a time when the effects of the economic slowdown (caused by rising rates) are beginning to be felt.

Markets have fallen significantly this year, anticipating a drop in corporate earnings, but there is still room for downside if we stick to expectations: 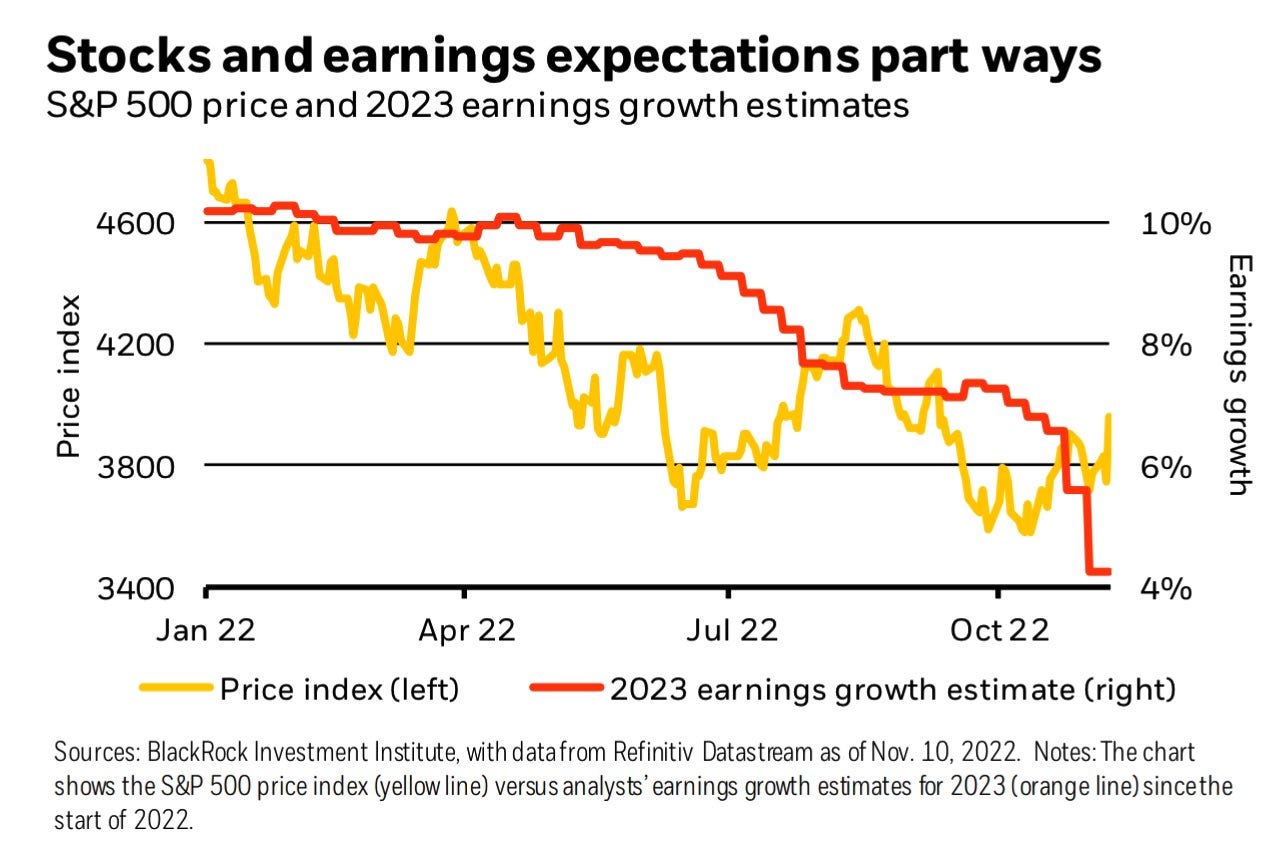 Construction stocks remain particularly resilient to the prospects of a slowing housing market. For example, builder Lennar is still hanging near its highs: 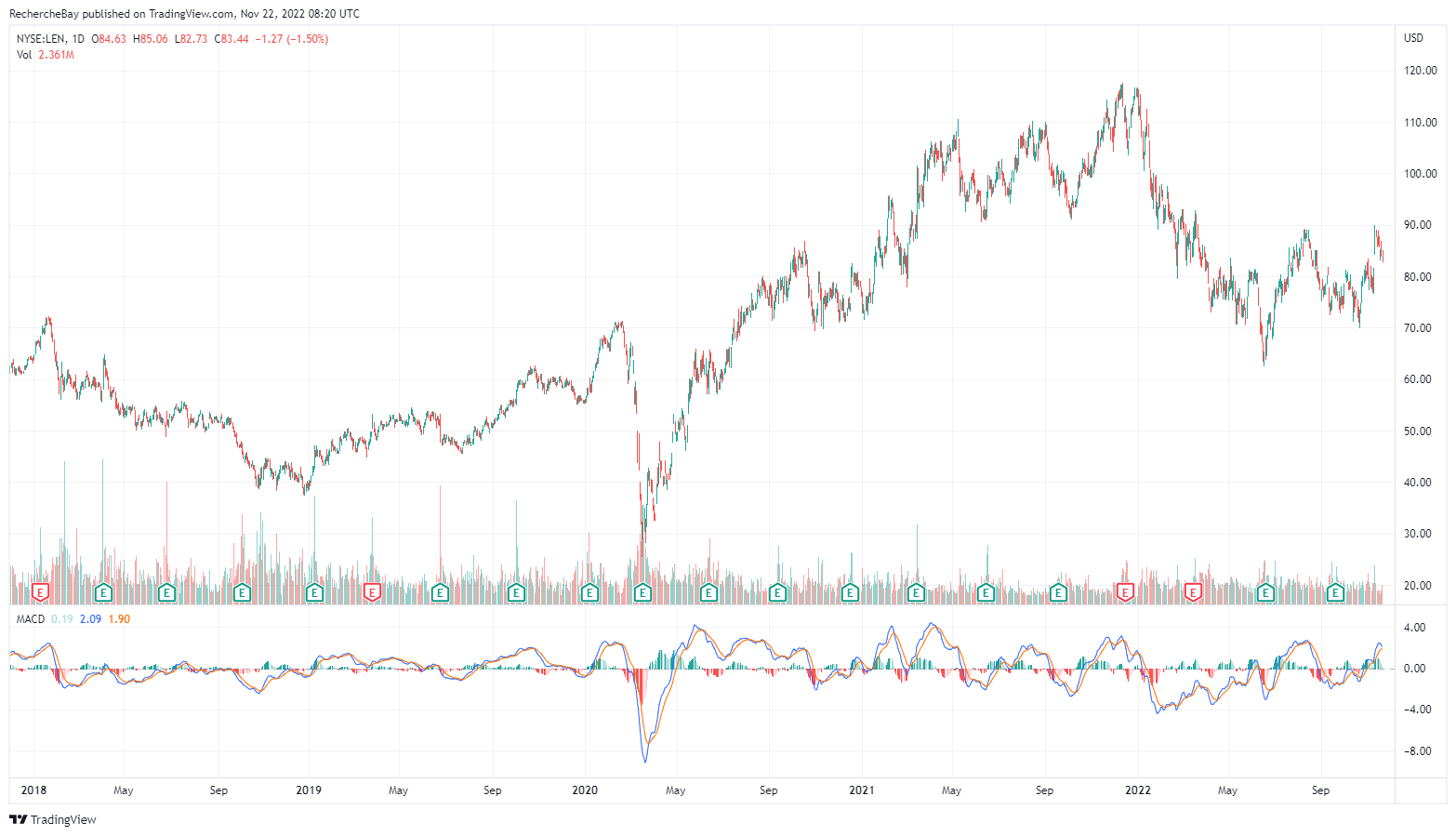 Yet construction market activity is slowing at the same rate as when Covid-19 arrived in 2020: 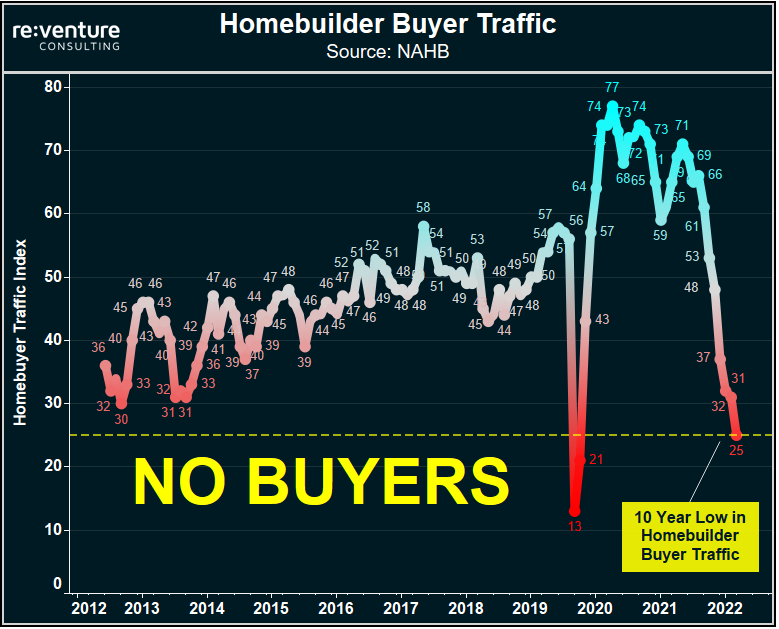 Rising interest rates have pushed the cost of home ownership to historic highs: it now takes 80,000 hours of work (40 years!) to afford a home in the United States. The American dream has become unattainable and the collapse of real estate projects is the logical consequence.

At this point, only the hope of a new change in the Fed's course would support some real estate stocks. Without a quick "pivot", we risk seeing a severe sell-off in this market segment.

The uncertainty about the date of a possible "pivot" still does not allow gold to clearly break out of the consolidation period that began two years ago: 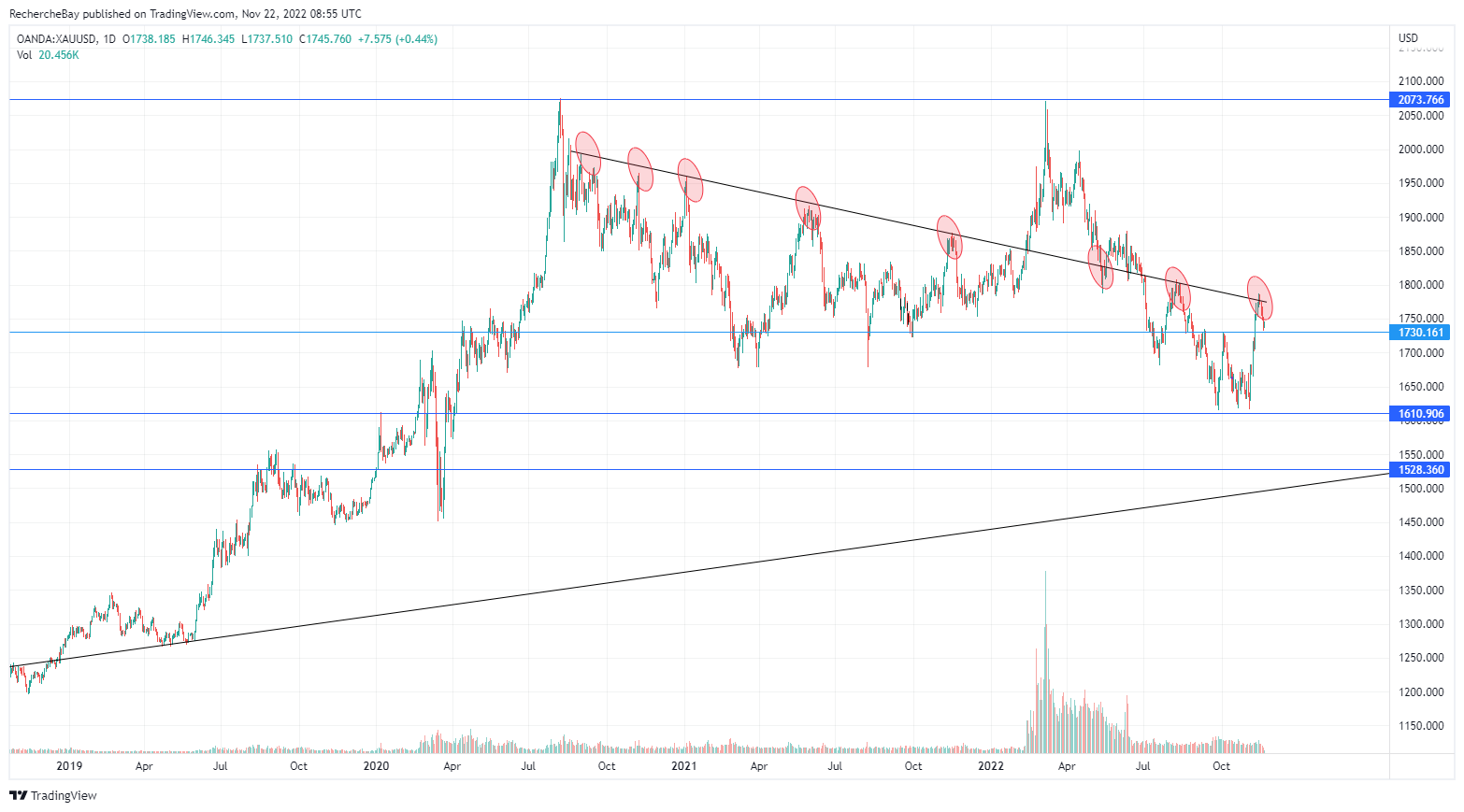 Only a decisive breakout above the resistance line drawn on this chart will allow gold to test its highs.

The behavior of the dollar will determine the continuation of gold's rebound.

The dollar chart is beginning to validate the end of the greenback's bull run. Markets are expecting a pause from the Fed, and with inflation far from under control in Europe, the focus is now on the next ECB rate hike. 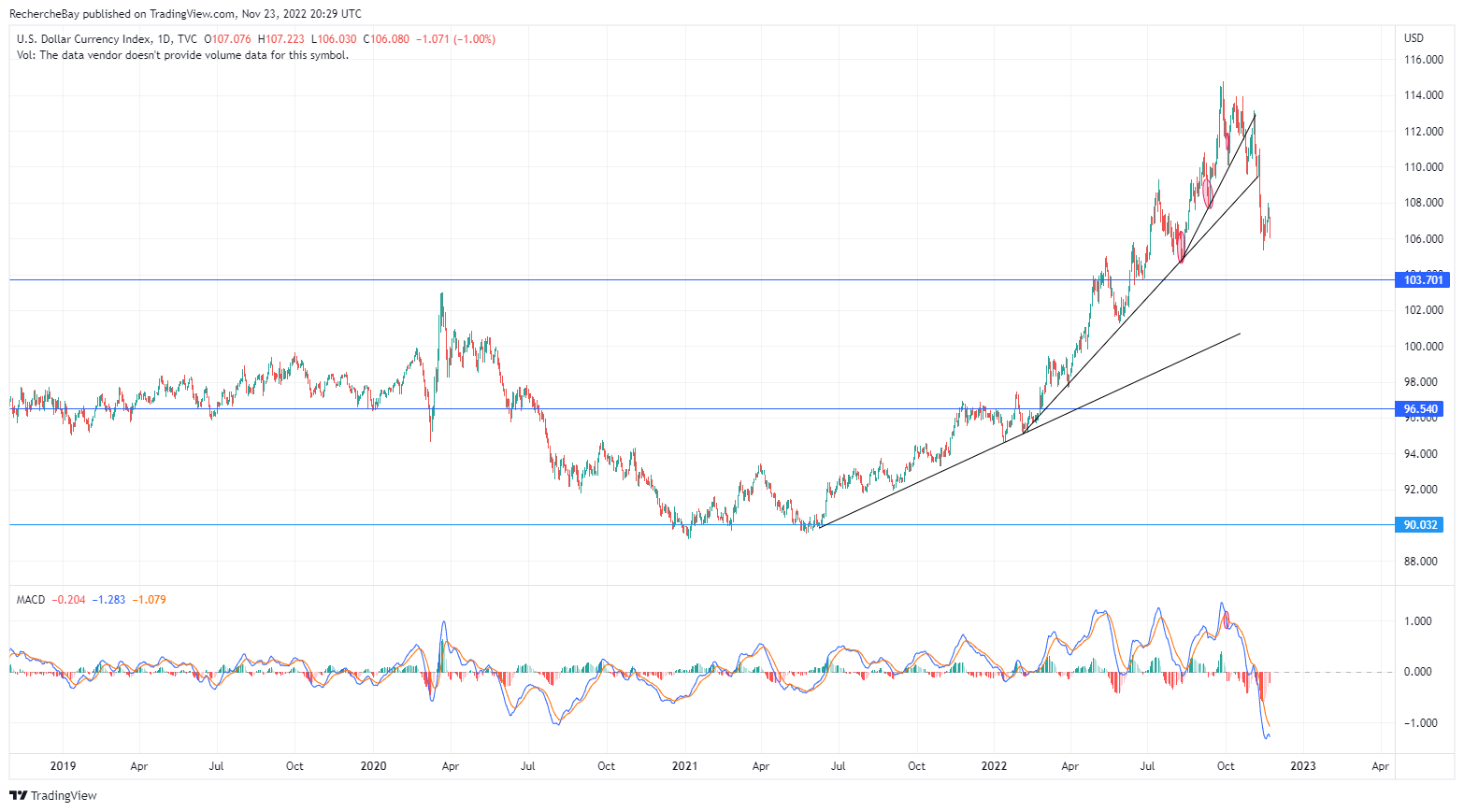 Another bearish element for the dollar is that China is accelerating its sales of Treasury bonds. 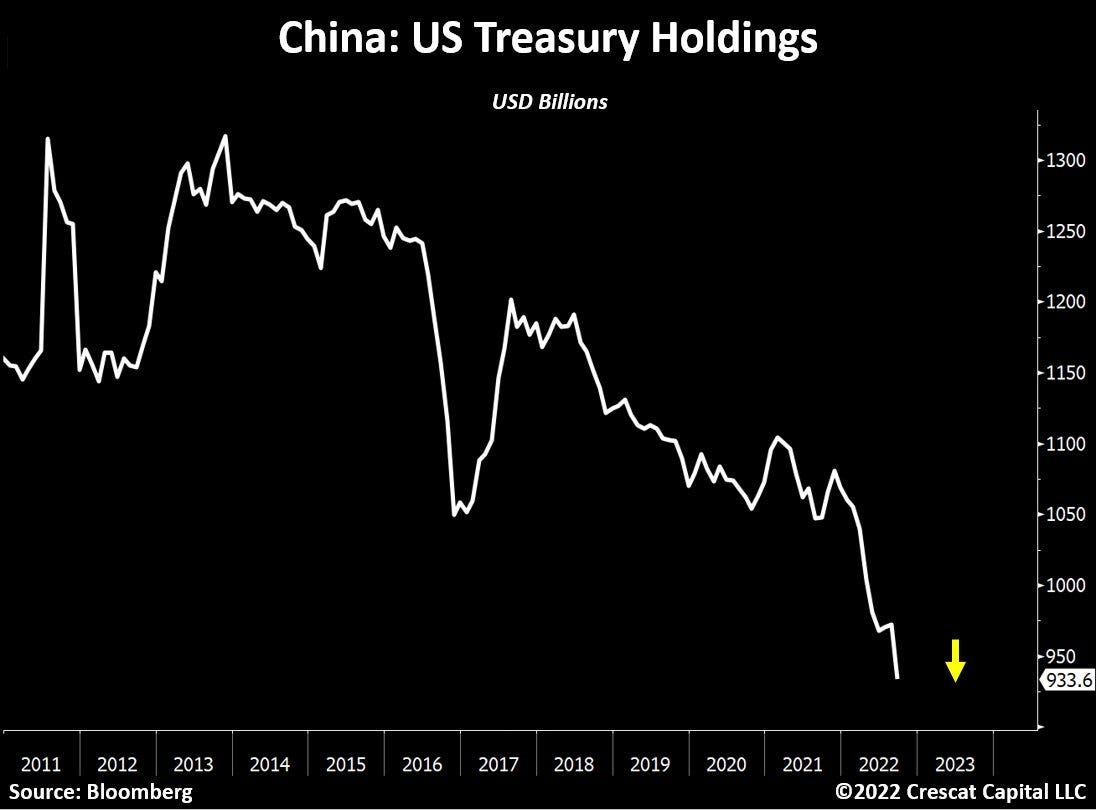 China is continuing its de-dollarization process, while at the same time trying to secure supplies of the raw materials needed for its transition.

Chinese rush for raw materials is contributing to the pressure on metal stocks.

According to the latest figures from the Silver Institute, demand for physical silver is expected to increase by +16% over last year. Mine production is not sufficient to meet such an increase in demand. In 2022, the grey metal is already recording a record deficit! And the energy transition is just beginning...

Even if there is a strong recession in 2023, the strain on physical metal stocks should be taken into account in future price forecasts.